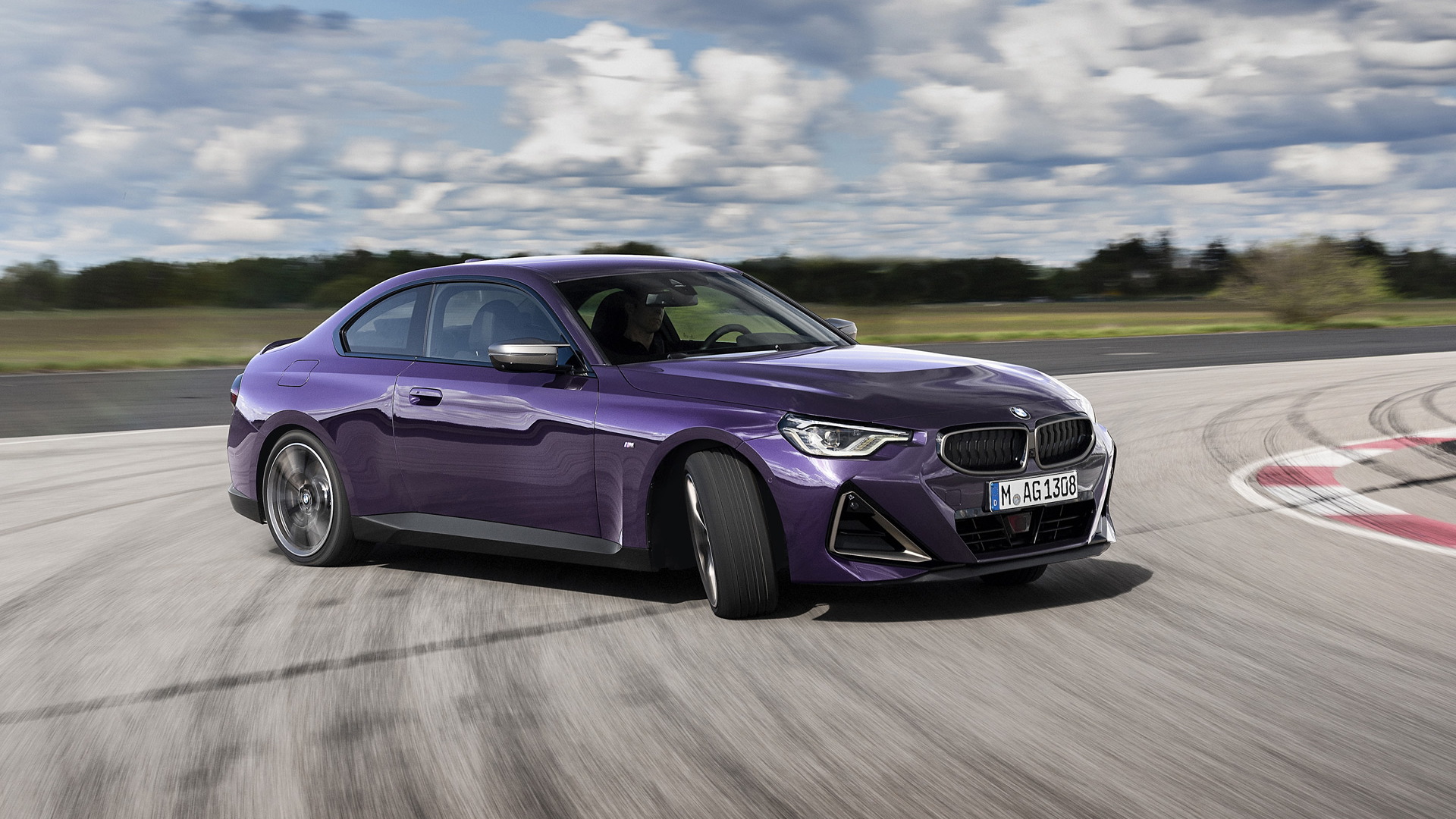 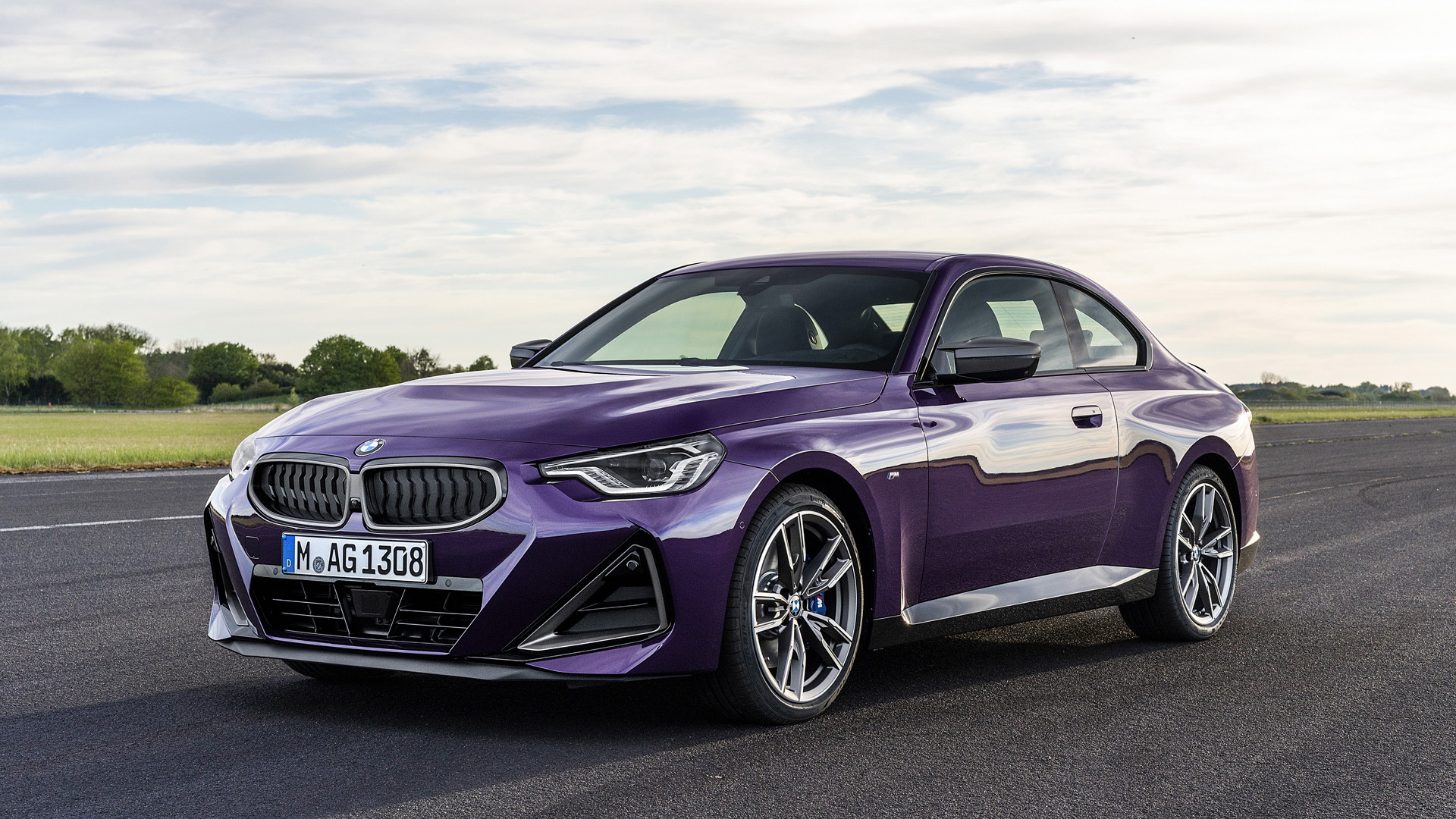 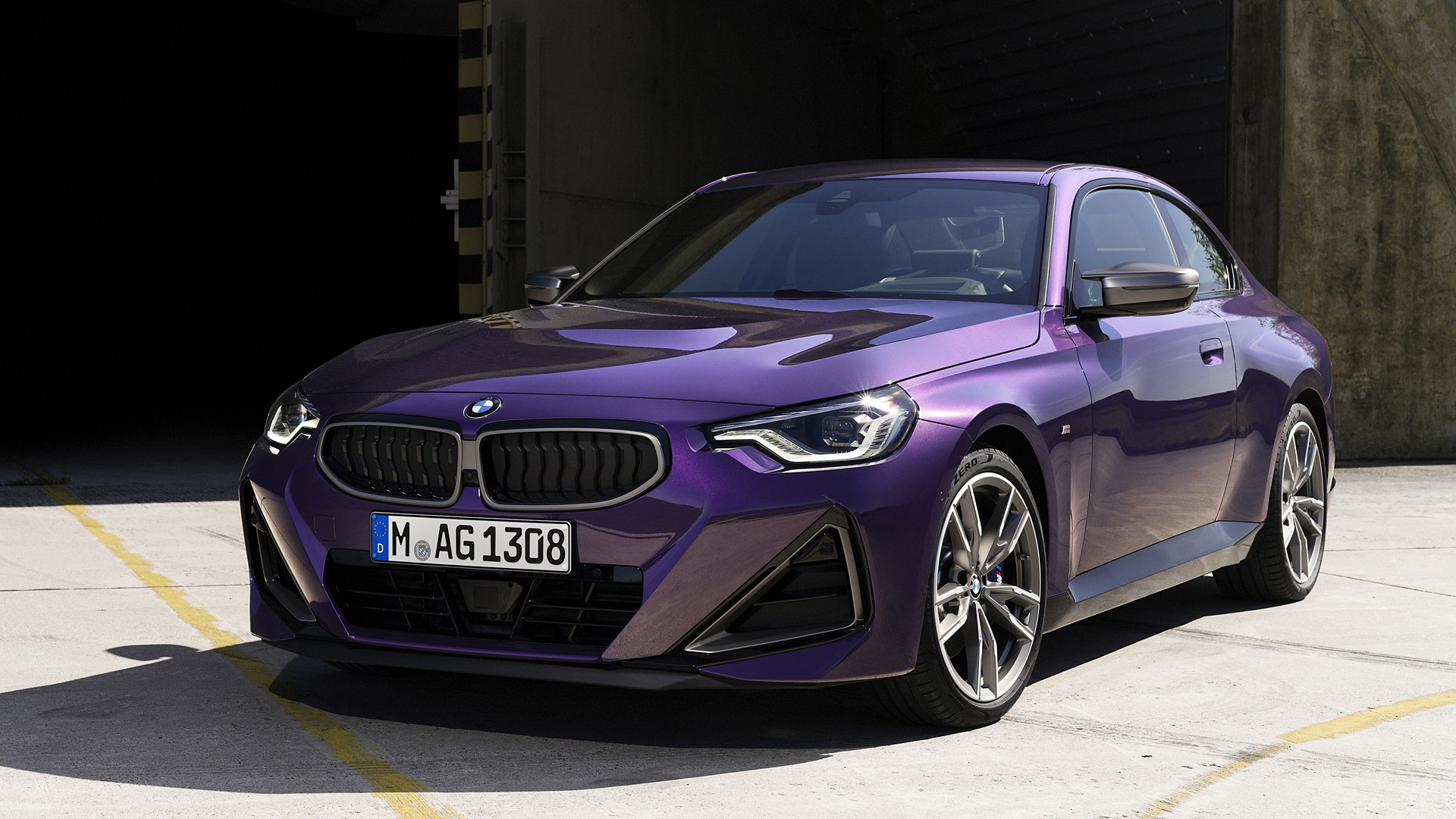 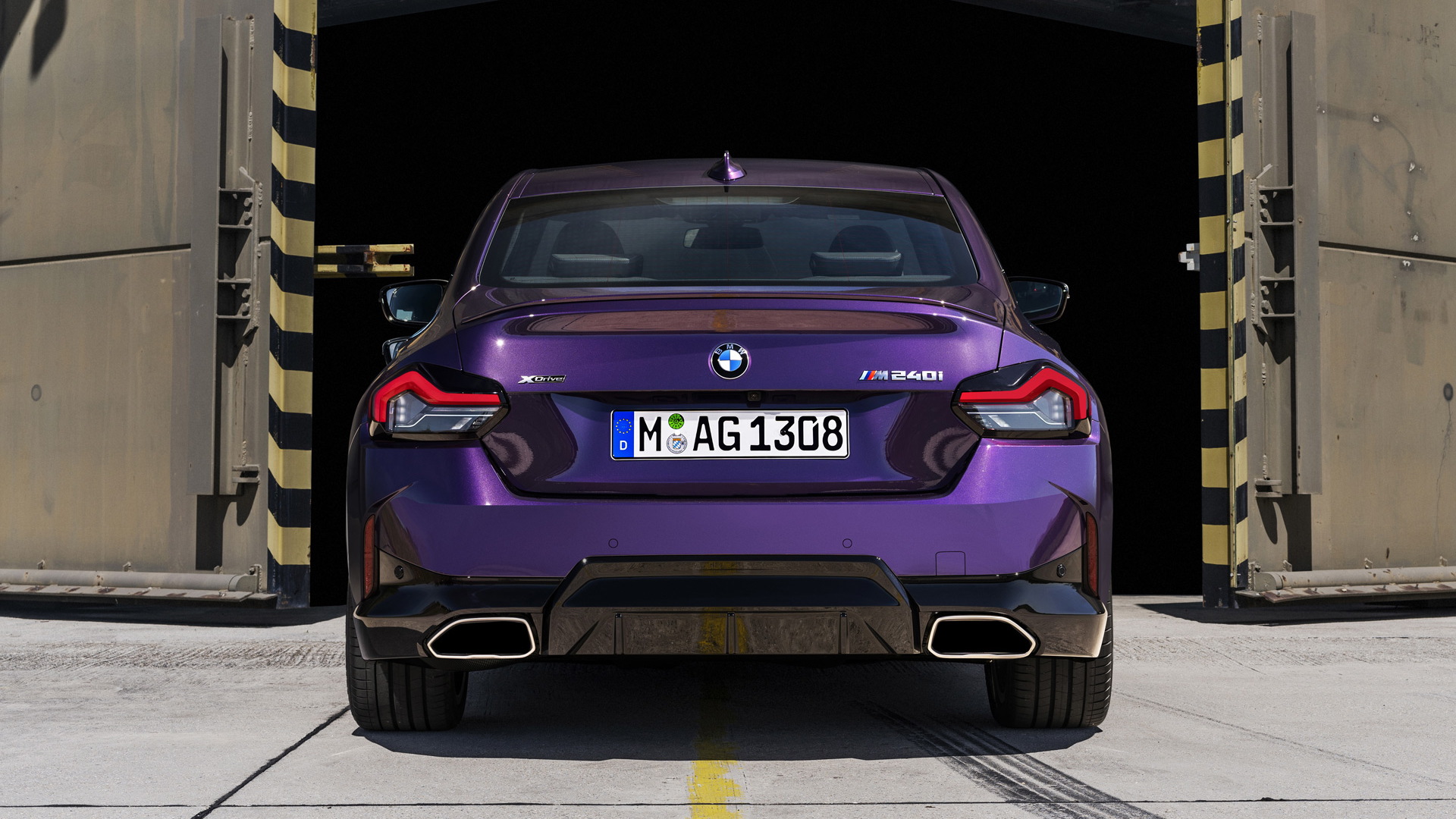 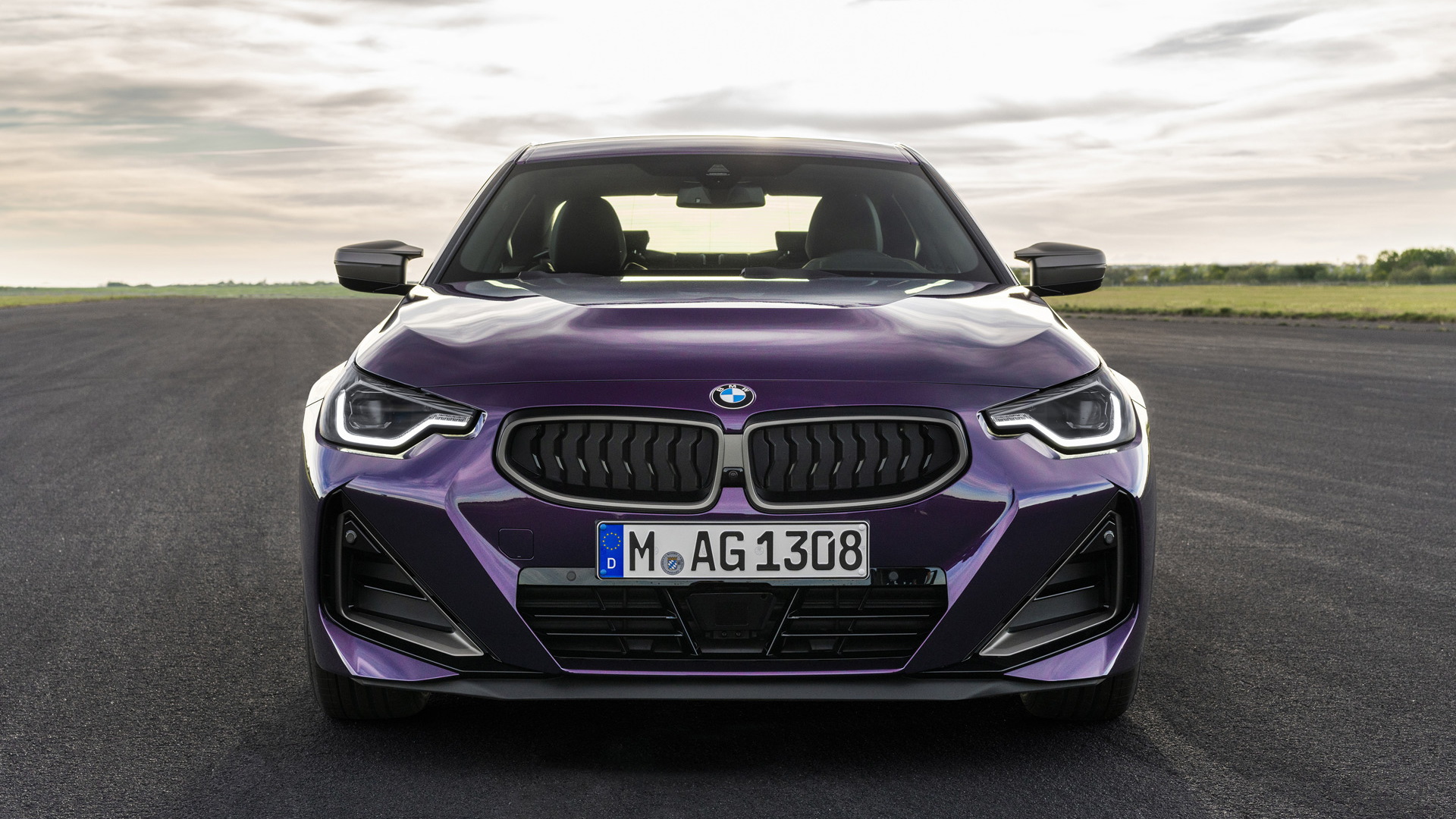 Whenever I hear that a BMW has grown in a redesign, a little piece of me dies inside. This isn’t to solely impugn BMW. Model bloat happens at every automaker. But it especially hurts when it’s a BMW because that growth often makes the cars lose some of the edge that made them so fun to drive. That’s certainly the case in the latest 3-Series and 4-Series.

So, when I learned that the redesigned 2022 2-Series coupe, which is arriving now, was bigger than its predecessor in every dimension my eyes shot backward into my head. It’s not just a little bigger, it’s real big. It’s roughly 4.3 inches longer, and 2.6 inches wider, though it is an inch lower. The wheelbase has also been lengthened by 2.0 inches and both tracks are wider, by 2.5 inches up front and 1.6 inches in the rear (the M240i’s rear track is 2.4 inches wider).

At 179.0 (or 179.4) inches long, that makes the new 2-Series as long as an E90 3-Series, which was sold from 2005-2011. The curb weights have also risen. Compared to last year’s models (with powertrains held equal) the 230i weighs 108 pounds more at 3,519 pounds, and the M240i is a whopping 209 pounds more, weighing in at 3,871 pounds. All of those signs pointed to a 2-Series that would feel more sluggish and rotund than its predecessor. I traveled to The Thermal Club in the California desert to see if that would be the case.

On paper, choosing a model becomes an interesting battle for the enthusiast’s heart. Does RWD with less power, or AWD with more power make for a better car? In practice, there’s no contest: the M240i is the clear favorite if performance is a priority. The acceleration difference between the two cars feels larger than the 1.4-second gap in 0-60 mph times. The turbocharged inline-6 makes easy power from the whole rev range, while coaxing output from the 4-cylinder feels laborious at times. It’s not slow, but it is more tedious.

Beyond that, the M240i’s performance-oriented AWD system doesn’t function or feel like one much of the time. Power goes exclusively to the rear wheels in situations where AWD isn’t necessary. During the street drive, I really only felt it intervene once when I got hard on the power a bit early during a quick left-right sequence and it helped to keep the rear of the car in line. The track at Thermal also gave the system a chance to show its magic, with its fair share of low-speed corners leading into long straights. That makes getting on the power early a priority to carry momentum onto those sections and the added traction from AWD is a welcome security blanket in those situations as I rolled onto the throttle aggressively.

Both the 230i and the M240i that I tested came with similar performance equipment. The 230i added an M Sport rear differential, M Sport brakes, M sport suspension, variable sport steering, and a rear spoiler as part of a $3,250 M Sport package. The M240i features all of those upgrades as standard, but goes further by swapping in an adaptive M suspension.

Even with the added weight and size, the 2-Series somehow feels smaller from behind the wheel in contrast to the other small BMW models we’ve tested lately. It feels dialed in thanks to quicker steering for a sharp turn-in and plenty of feedback. That communication as the car approaches the limit that has been missing from the latest 3-Series and 4-Series models, so it’s great to see it in the 2-Series.

Though the M240i isn’t suited to the large southern track at Thermal, it would be an absolute blast on a tighter circuit or even an autocross course. BMW says the new 2-Series has nearly 50:50 weight distribution and 12% more torsional stiffness. The whole package feels solid, and the suspension in both models does a great job of controlling not only body roll, but rebound. The nose dips under hard braking, but it doesn’t bounce back up and unsettle the front or rear. The M240i’s comfort settings make it ride a bit better on the road, and the 230i has a busier ride with the optional sport suspension.

The profile of the new 2-Series makes me believe it has that near-perfect weight distribution. The cabin looks like it has been shoved rearward, giving the coupe classic long-hood, short-deck proportions. Up front, the smaller signature kidney grille doesn’t look cartoonish  like the larger one on the new 3-Series and 4-Series. And you can get the car in a new purple metallic sheen called Thundernight metallic—fantastic.

Though the car’s overall dimensions have grown, backseat legroom has fallen to 32.0 inches. It’s very tight back there and hard to climb into as well. Stacking two adults front-to-back is pretty much impossible, the backseat reminded me of the one in the Ford Mustang and doesn’t seem to be meant for regular use.

The price of performance

The 230i starts at $37,345, while the M240i is much more expensive, starting at $49,545. That gives the 230i a much stronger value proposition. Both models come standard with parking rear sensors, power front seats, adaptive cruise control, navigation, and blind-spot monitors, and the M240i adds the performance features listed above, plus a moonroof, ambient interior lighting, and darkened exterior trim.

The 230i I tested was only $46,570, and even with the upgraded screens and performance packages it cost about $10,000 less than the $56,845 price tag for my M240 tester. If you do want the 230i, I suggest staying away from the M240i at all costs. Test driving the more powerful engine will make stepping back down difficult.

For those who want even more performance, an M2 should arrive some time next year. It will likely feature a detuned version of the 3.0-liter twin-turbocharged inline-6 found in the M3 and M4 and produce around 420 hp. That's up considerably from the 365 hp of the last M2 and should give the new car a slight edge over the 416-hp Mercedes-AMG CLA 45. Excitingly, a manual transmission is also expected, an option sadly missing for the M240i.

I was delighted to find that my initial apprehensions about the 2-Series were misplaced. Sure it’s gotten bigger, but it’s also gotten smarter and stronger. And those attributes win the day to give BMW a great driver’s car at the bottom of its lineup.

BMW paid for lodging and track time for Motor Authority to bring you this first hand report.