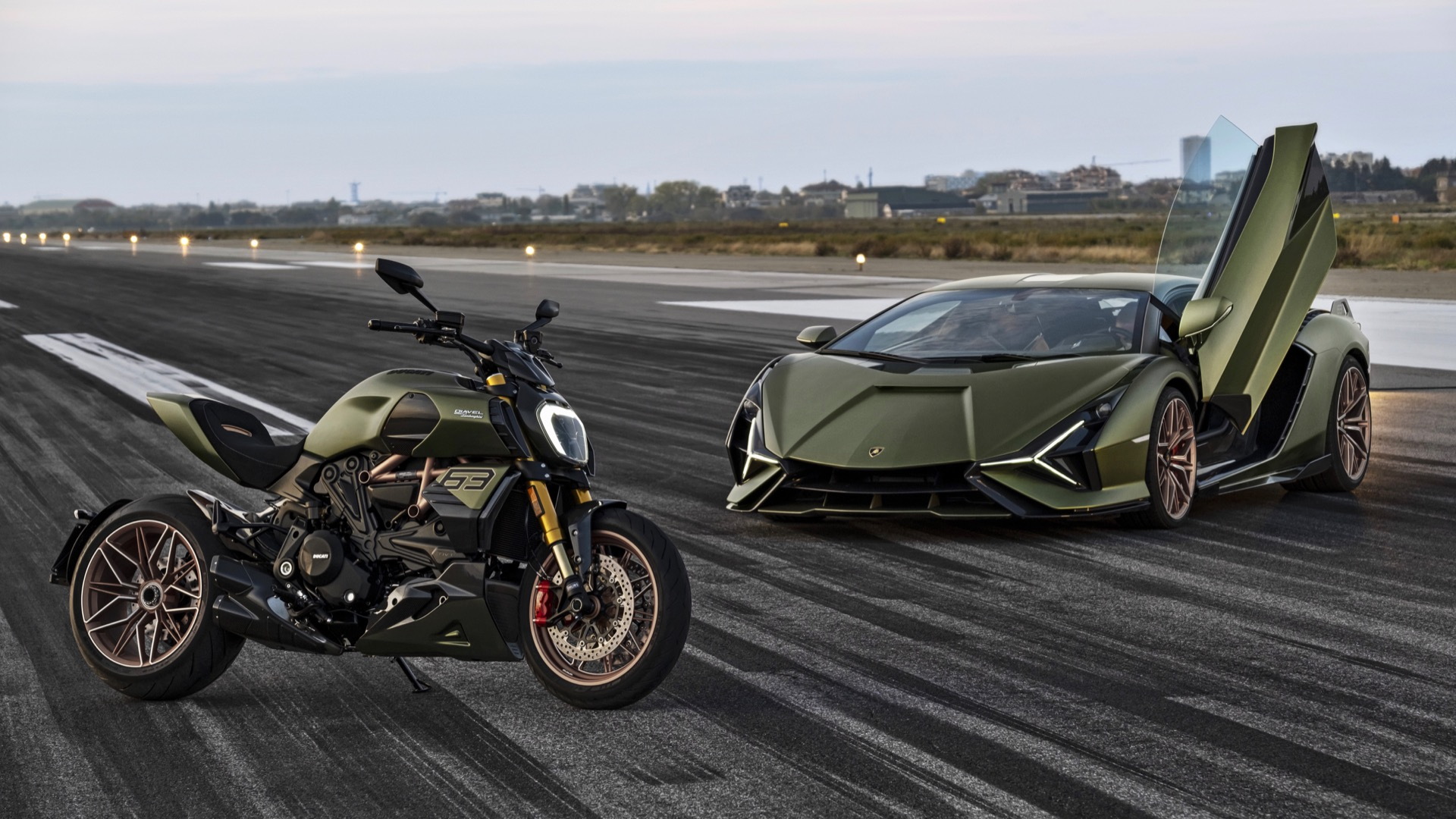 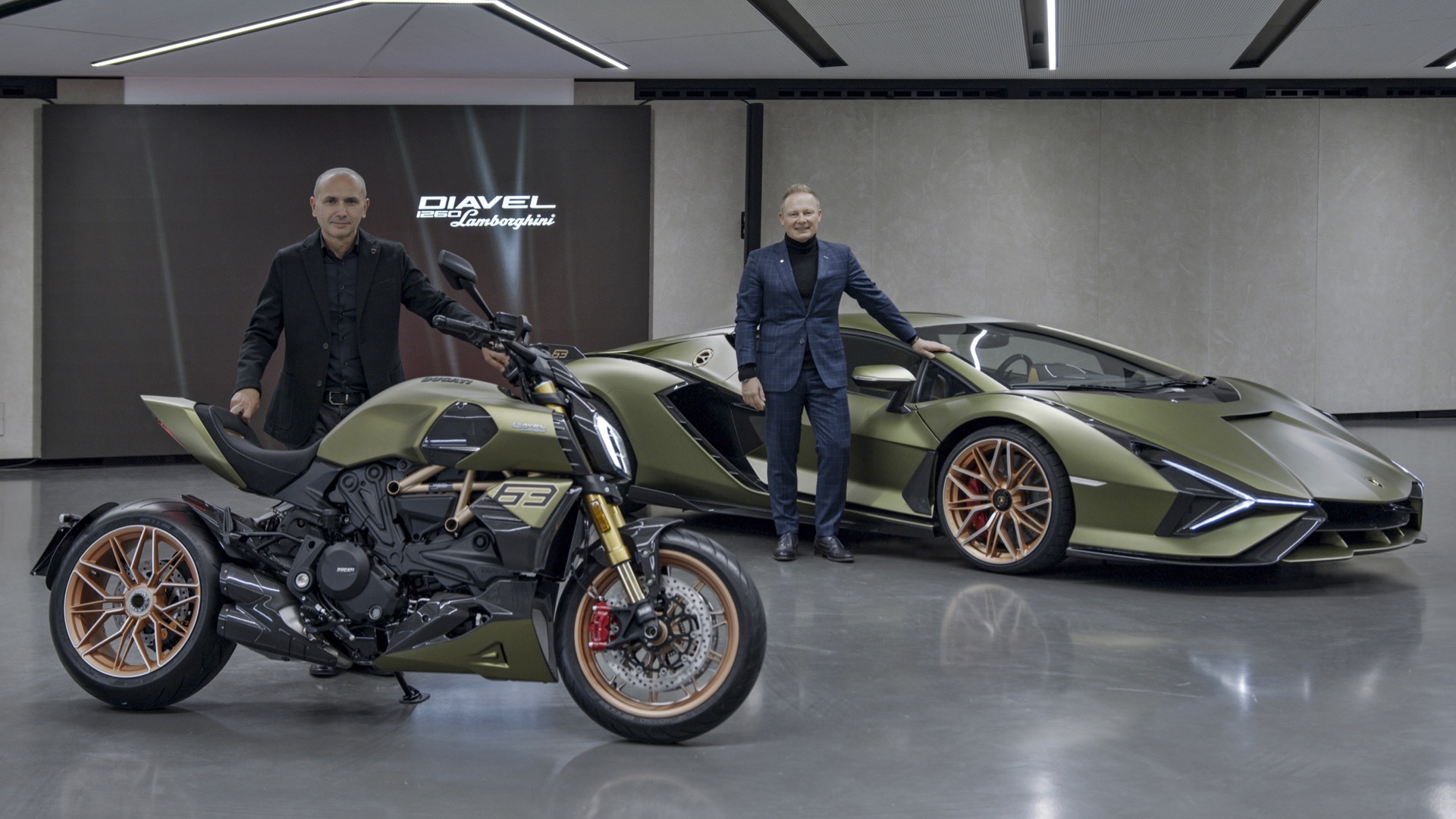 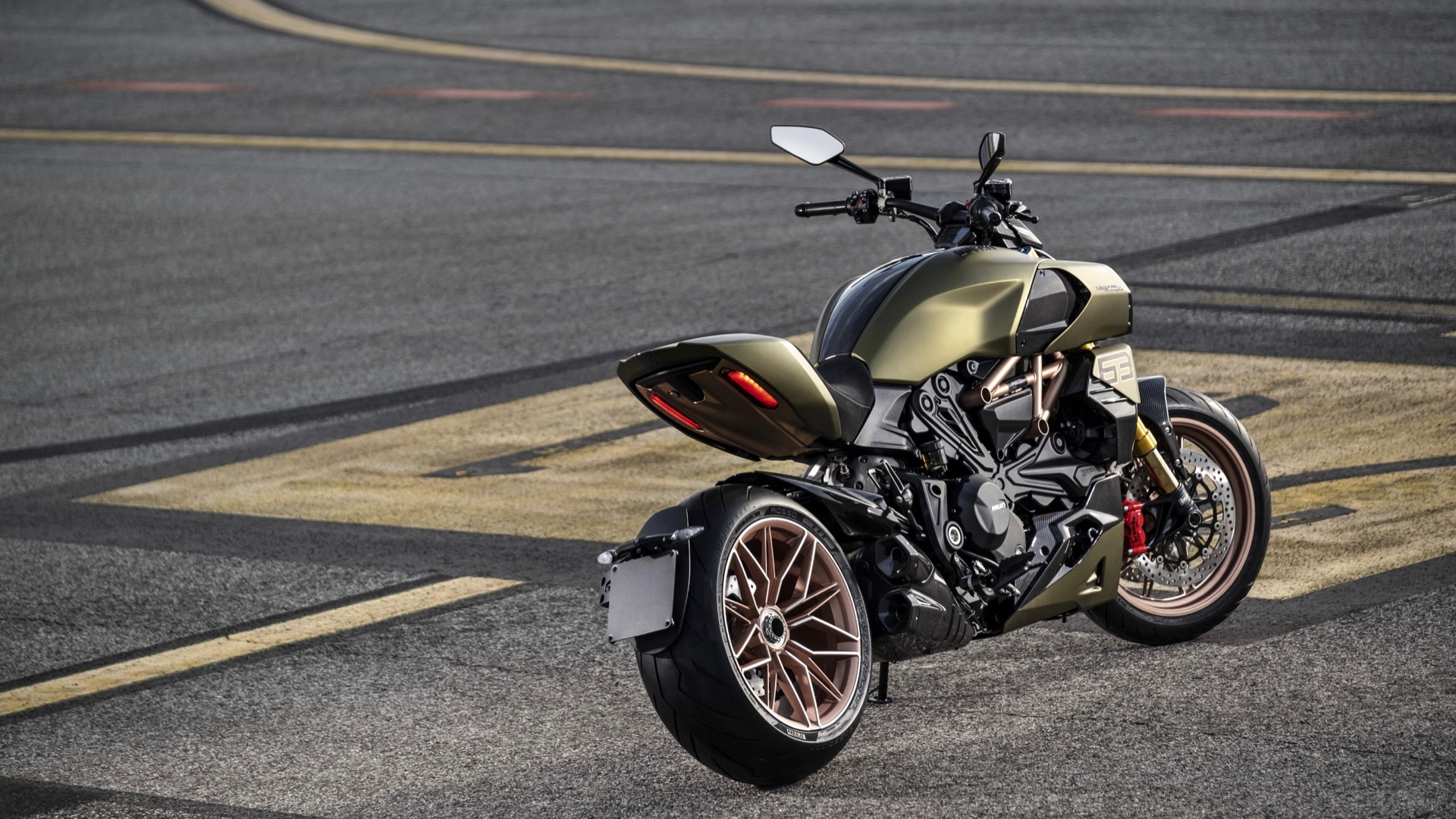 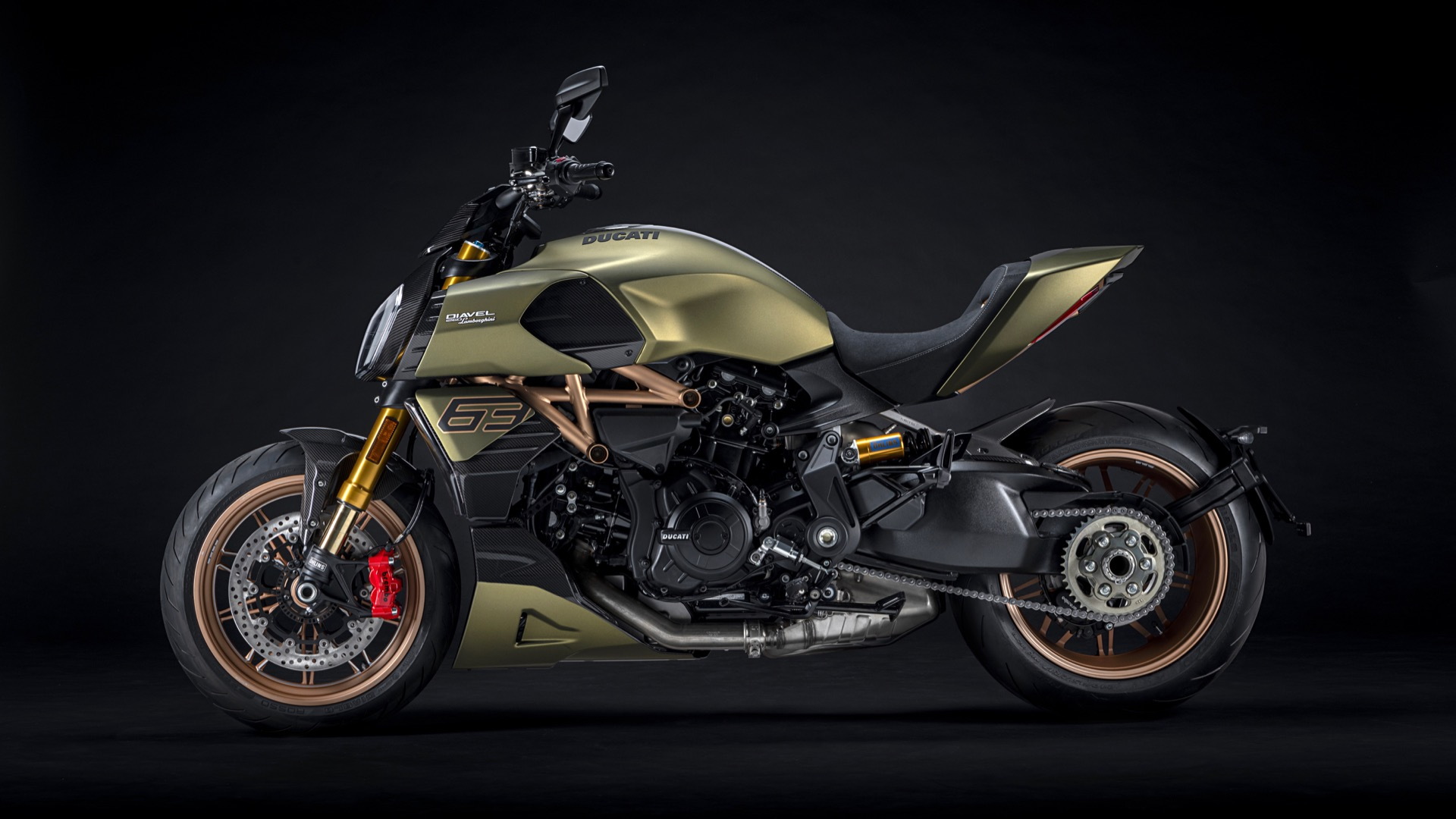 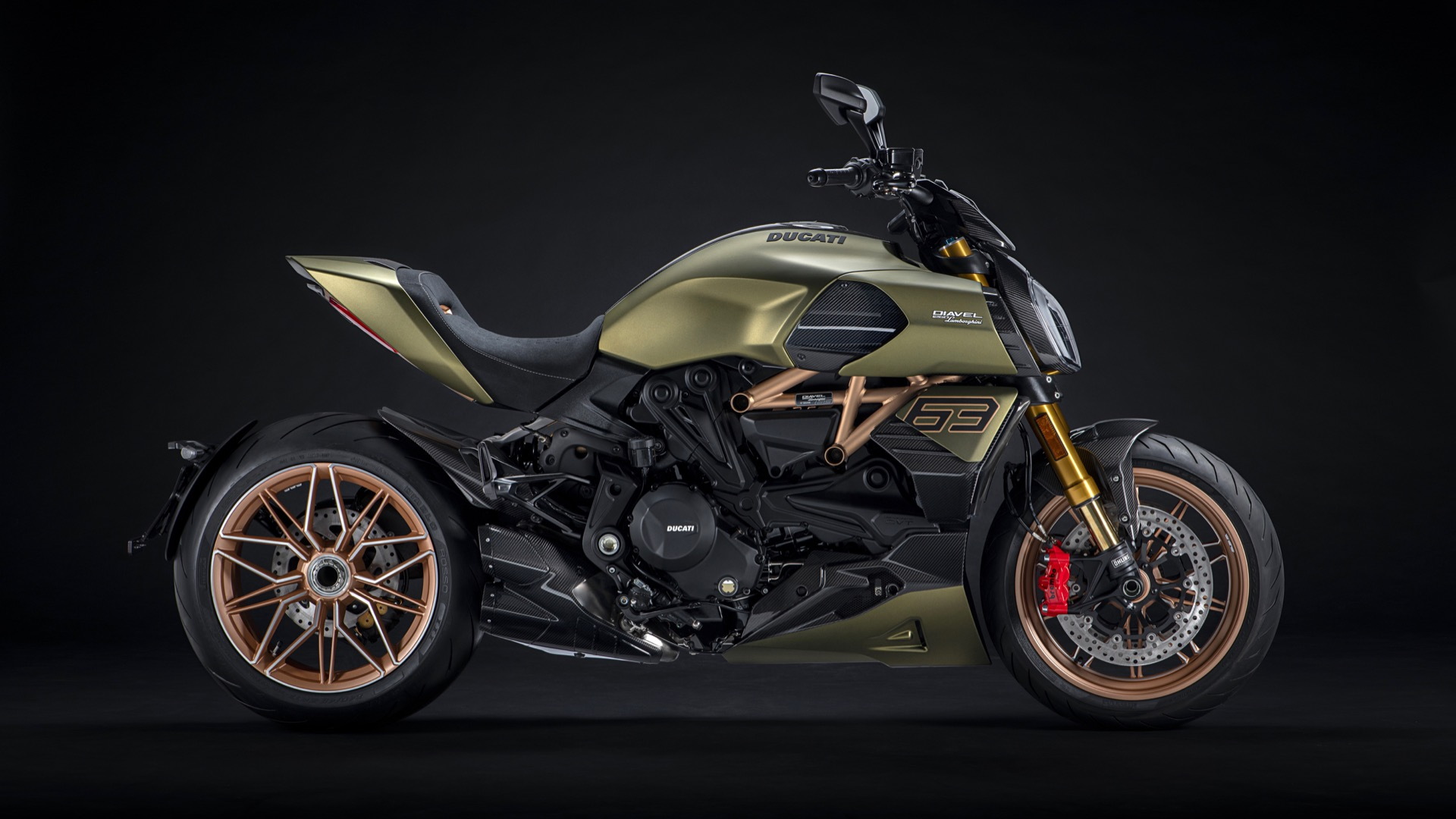 Ducati on Wednesday unveiled a motorcycle inspired by the Lamborghini Sian FKP 37 supercar. It's the first collaboration between the two Italian firms, which both fall under the Volkswagen Group umbrella.

The Ducati Diavel 1260 Lamborghini is based on the existing Diavel 1260 motorcyle but features styling that mimics the limited-edition Siàn FKP 37. The bike rides on forged wheels with the same design as on the supercar, and also wears the same paint. The bodywork gets Verde Gea, while the frame, seat tail, and wheels are finished in Electrum Gold. Ducati did throw in a bit of its trademark red however, for the Brembo brake calipers.

The shape of the exhaust and seat have a hexagonal motif too, which is another design trait typical to the Lamborghini brand. The bike also gets carbon-fiber radiator covers, air intakes, silencer cover, central tank cover, seat cover, front and rear mudguards, dashboard cover, and headlight frame. These parts help bring the dry weight down to 485 pounds.

Power is provided by Ducati's 1,262-cc Testastretta DVT L-Twin engine, which makes 157 horsepower and 95 pound-feet of torque. That power is channeled to the pavement through a 240-millimeter rear tire. The bike features Ohlins adjustable dampers front and rear, as well as a host of electronic aids, including anti-lock brakes, traction control, wheelie control, and cruise control.

It's no surprise that Ducati and Lamborghini are starting to collaborate now, as both brands could be separated from the VW Group mothership, either separately or together in a portfolio also including fellow Italian firm Italdesign. It was reported as early as May 2019 that VW Group is considering offloading the brands (along with Bugatti) as it shifts focus to electric cars.