Legendary designer Gordon Murray's latest project is the T50 supercar, a successor to the McLaren F1. Like that car, the T50 will emphasize lightness as well as power, sporting a curb weight of just 2,160 pounds. That should undercut the typical supercar by almost a third, claimed Gordon Murray Automotive (GMA) in a Thursday press release.

Weight is the enemy of performance. It spoils everything from acceleration to handling. Adding power can help counteract mass, but Murray believes that leads to cars that can't be fully appreciated in the real world.

"Today, the enjoyment of driving has been lost as so many supercars only come 'alive' at the upper ends of their performance capabilities," Murray said in a statement. "Chasing a top speed only adds weight (notably through ever-more powerful engines), so the future of true performance cars lies in shedding weight intelligently."

To make that happen, Murray and his team examined every component in detail. The team holds weekly "weight watchers" meetings, where staff review the weight of every part—down to nuts, bolts, and washers.

The diameter and length of each of those fittings—about 900 in total—was optimized by calculating the amount of force each would be exposed to, according to GMA. That ensured parts weren't bigger than they needed to be, saving weight. 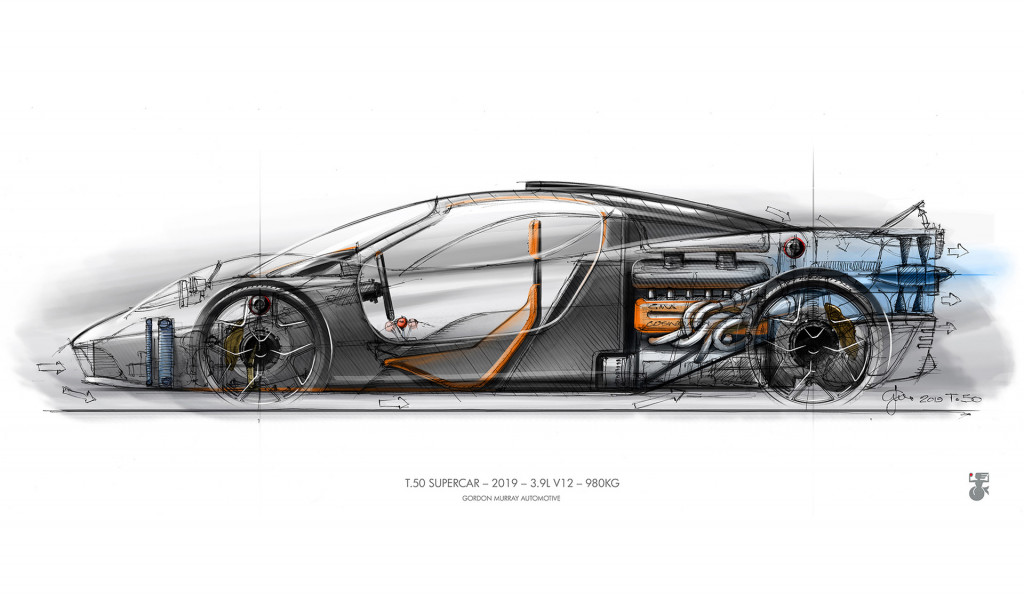 Other components were put under the microscope as well. The T50 has the same three-seat configuration as the F1, with the driver in the center. The driver's seat weighs less than 15 pounds, while the passenger seats that flank it weight less than 7 pounds each, according to GMA. Even the pedal box is 0.6 pound lighter than the F1 unit, the automaker claims.

Carbon-fiber construction helps reduce weight as well. Together, the monocoque and body panels weight less than 330 pounds, according to GMA.

While weight reduction was the priority, Murray did not ignore power. The compact T50 (it's smaller than a Porsche 911) is powered by a Cosworth-developed 3.9-liter V-12, which makes 650 horsepower and 332 pound-feet of torque. The engine will be assisted by a mild-hybrid system that can add 30 hp temporarily. A ram-air system can boost total output to an even 700 hp. Drive is to the rear wheels only, via a 6-speed manual transmission.

T50 production is scheduled to start in early 2022. Just 100 road-going versions will be built, priced at $2.5 million each. An additional 25 track-only models is also a possibility.