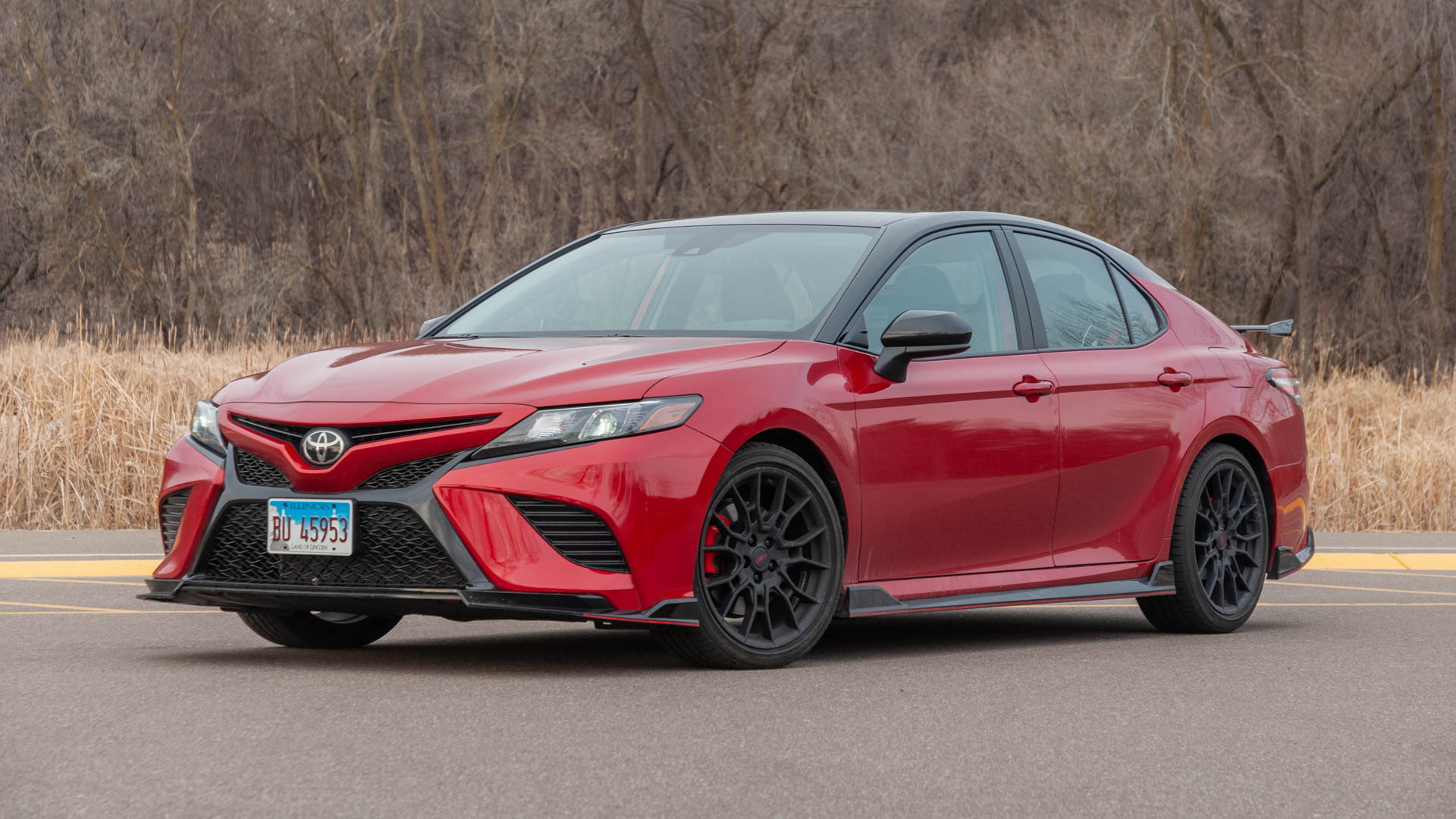 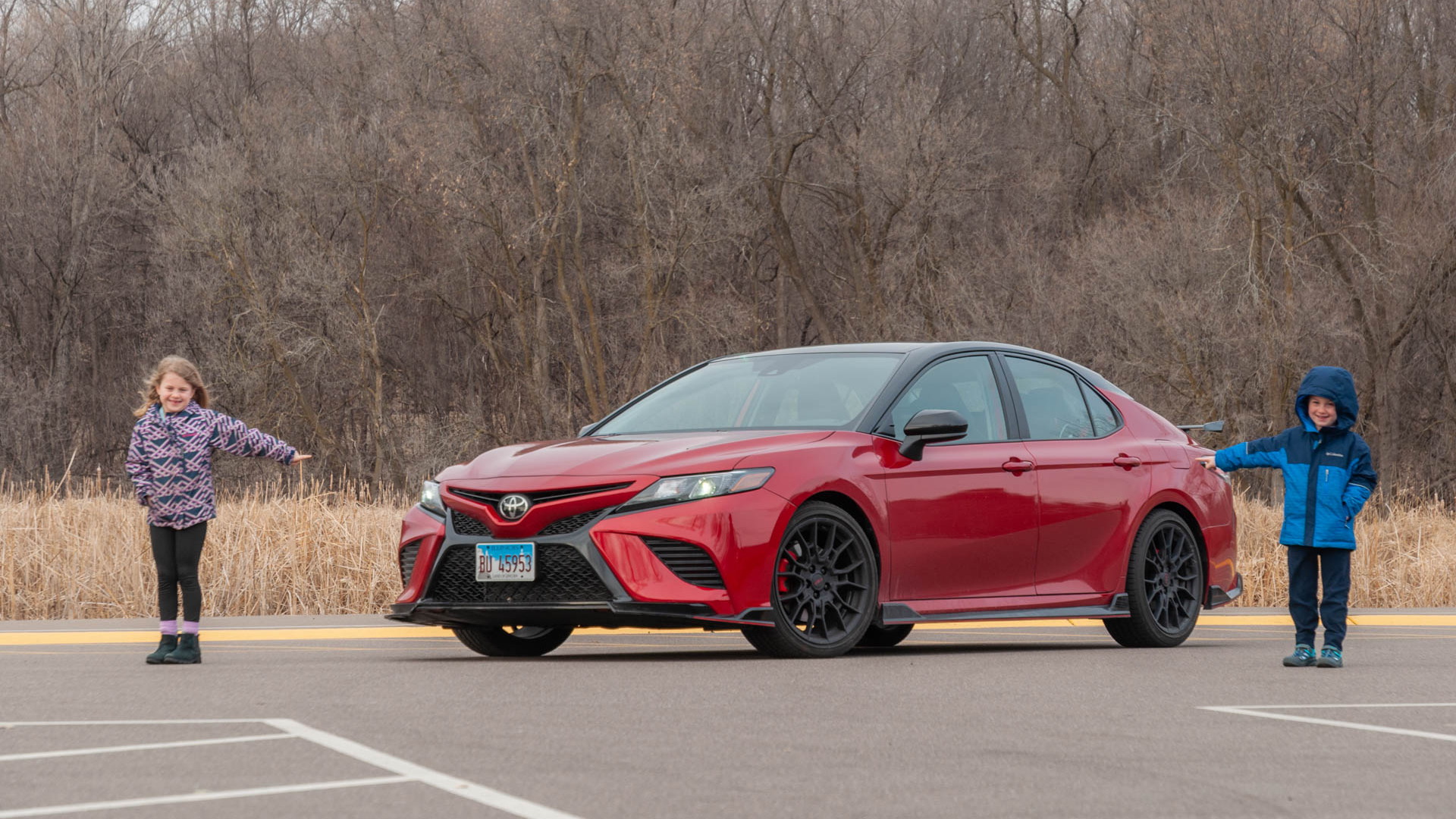 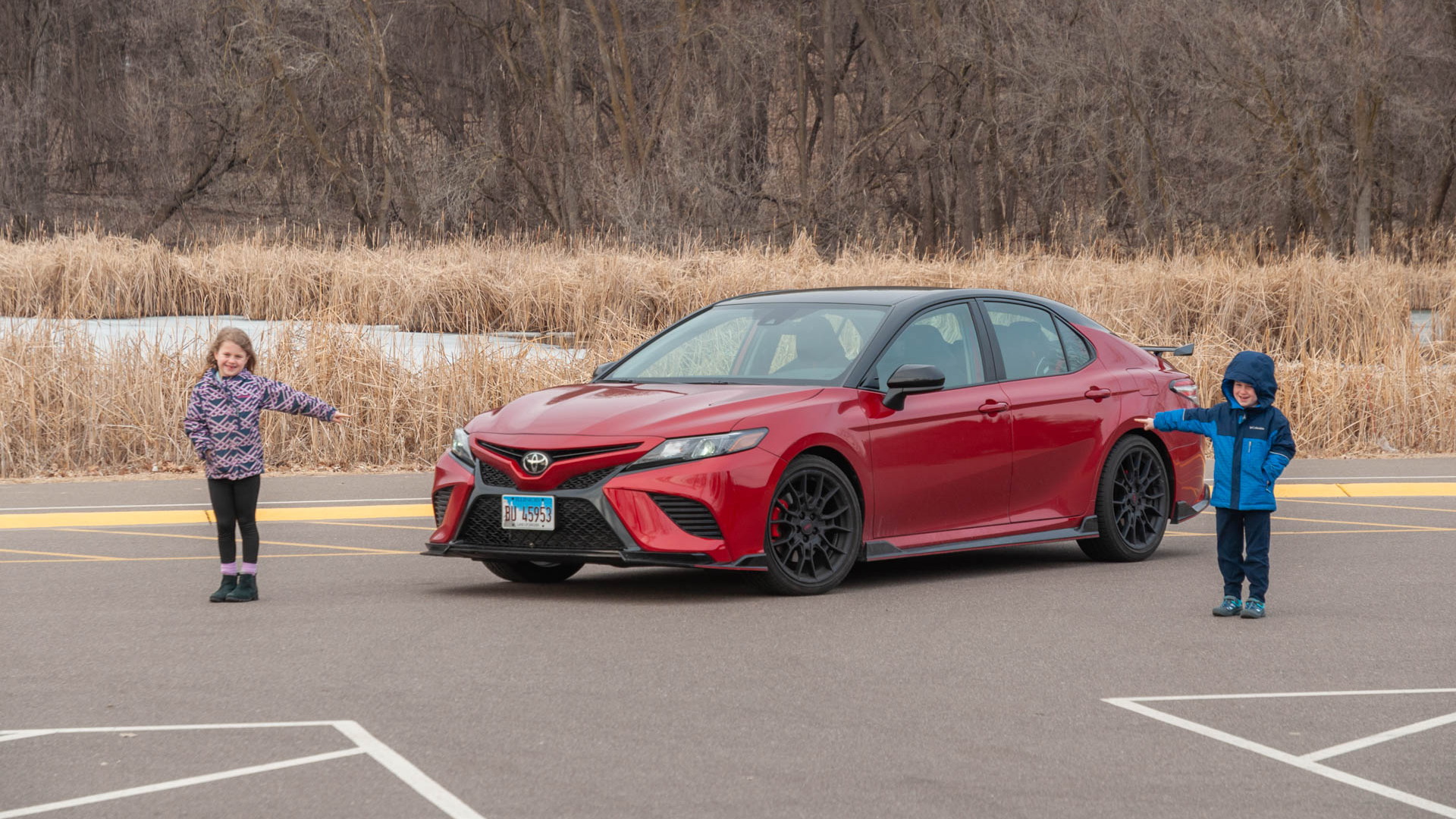 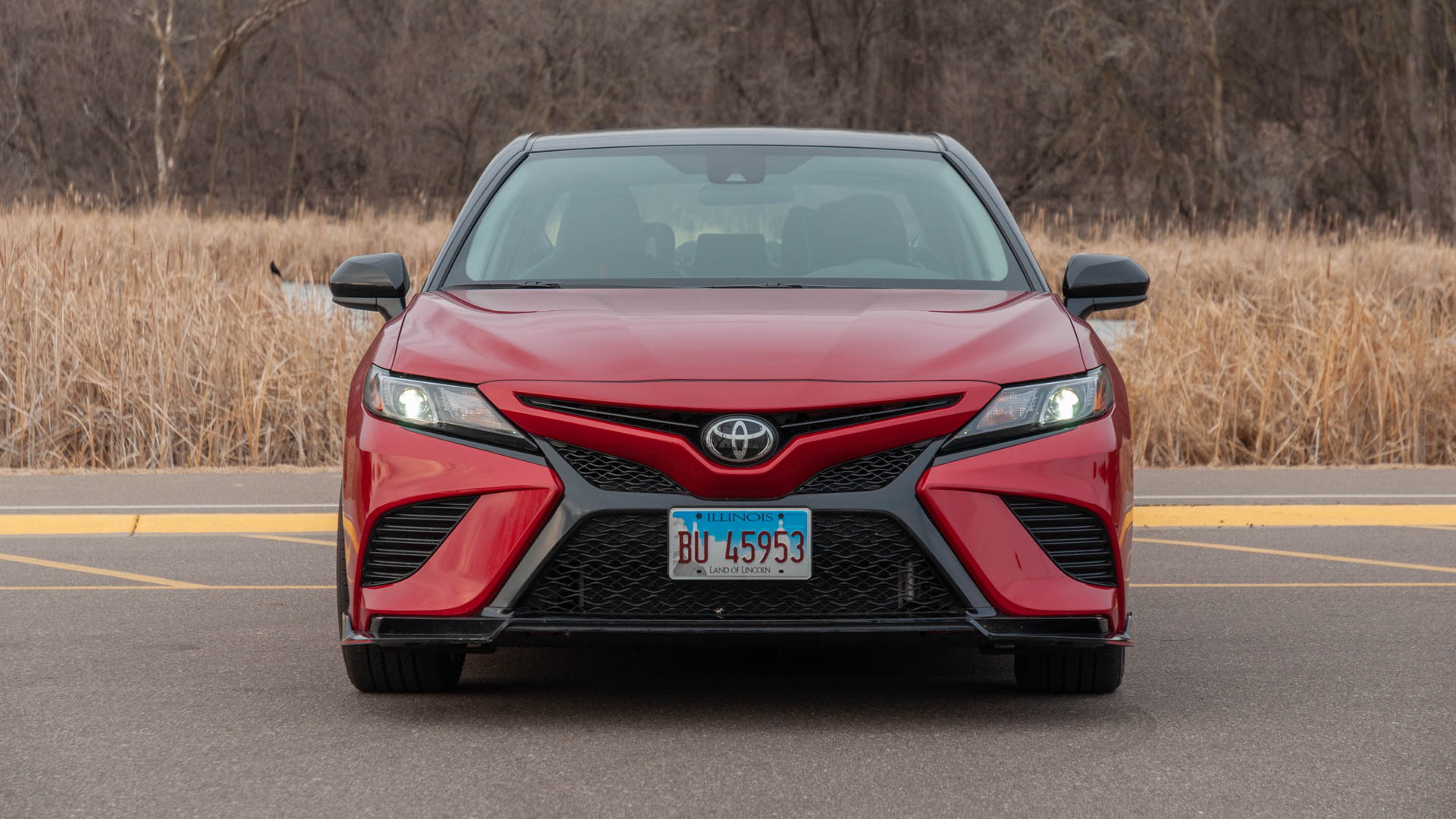 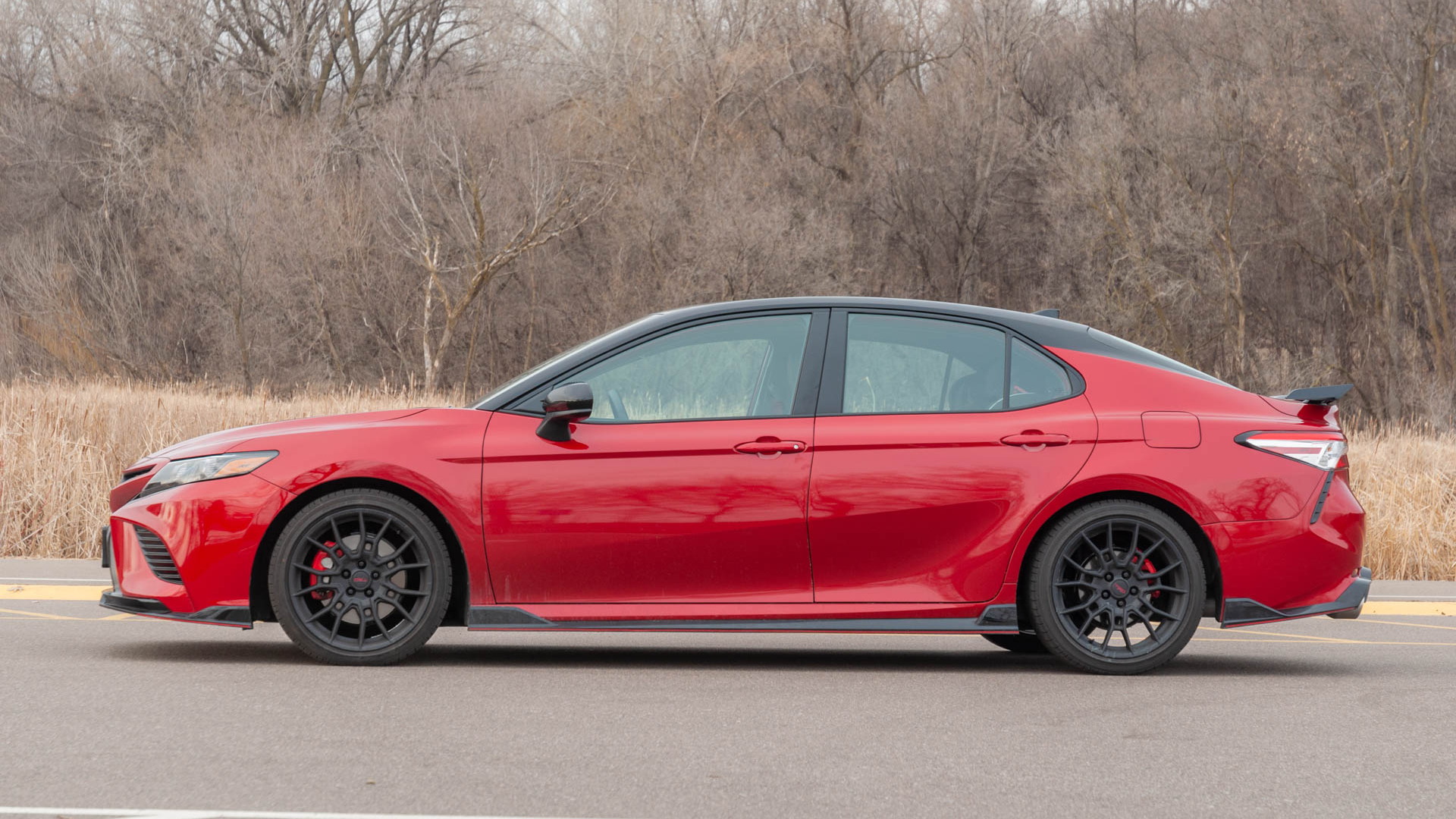 Funny thing about kids: They are a blank slate without preconceived notions of the reputations of models and brands. They also have no filter and an uncanny ability to be blunt. In the eyes of a child, the 2020 Toyota Camry TRD “looks like a race car.”

My 4-year-old boy and 6-year old girl are as impressionable as any kid, but they’re exposed to more than 50 new vehicles each year, watch the 24 Hours of Le Mans (they cheer for the Pink Pig as of late), and enjoy the Goodwood Hill Climb. Toyota, you struck a chord.

It doesn’t matter that it starts as a Camry in the eyes of a child. To them, it’s cool.

Parents, it takes $31,995 to make your kids think you daily drive a race car. It’s not a race car, but Toyota got some things right and some wrong with the 2020 Camry TRD. 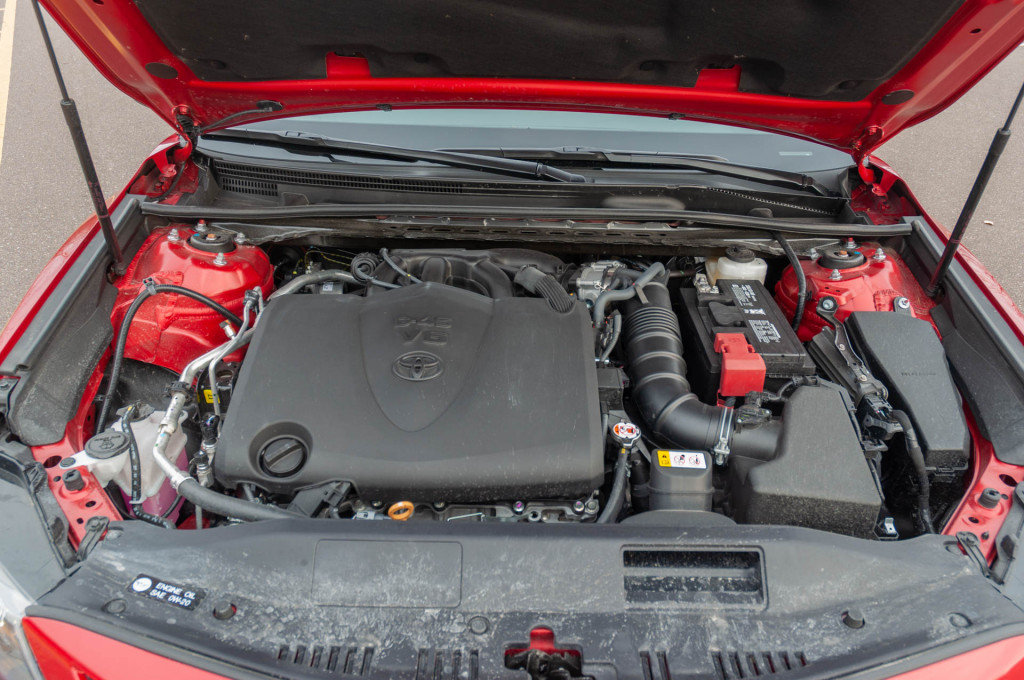 The Toyota Camry TRD’s 3.5-liter V-6 sends its 301 horsepower and 267 pound-feet of torque to the front wheels through an 8-speed automatic transmission. Oddly, the TRD model is the least-expensive way to get the V-6 under the hood of a Camry at $3,410 less than a V-6-powered XLE. The engine is smooth as butter and the power builds through the rev range. The 8-speed looks for the earliest opportunity to upshift in the name of fuel economy, but in Sport mode the transmission will wring out the engine higher into the rev range, which makes its plentiful power easier to access. 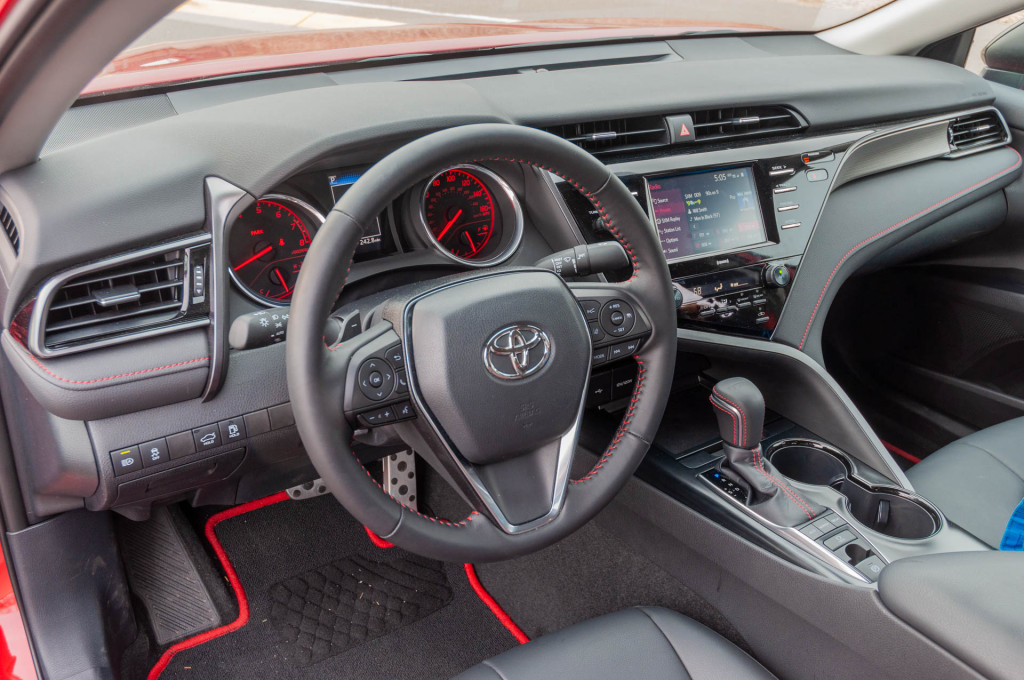 The XLE model costs about $1,500 less than the TRD (though with the standard 2.5-liter 4-cylinder) and features more equipment. It has dual-zone automatic climate control, wireless smartphone charging, a 7.0-inch driver information display, leather-trimmed heated seats, adjustable rear headrests, an auto-dimming rearview mirror, and an 8.0-inch touchscreen infotainment system. The more expensive TRD has none of this as standard, isn’t available with any of it, and makes do with a 7.0-inch touchscreen infotainment system. You’re paying for the V-6, lowered sport suspension, body kit, wheels, and tires, not the features. 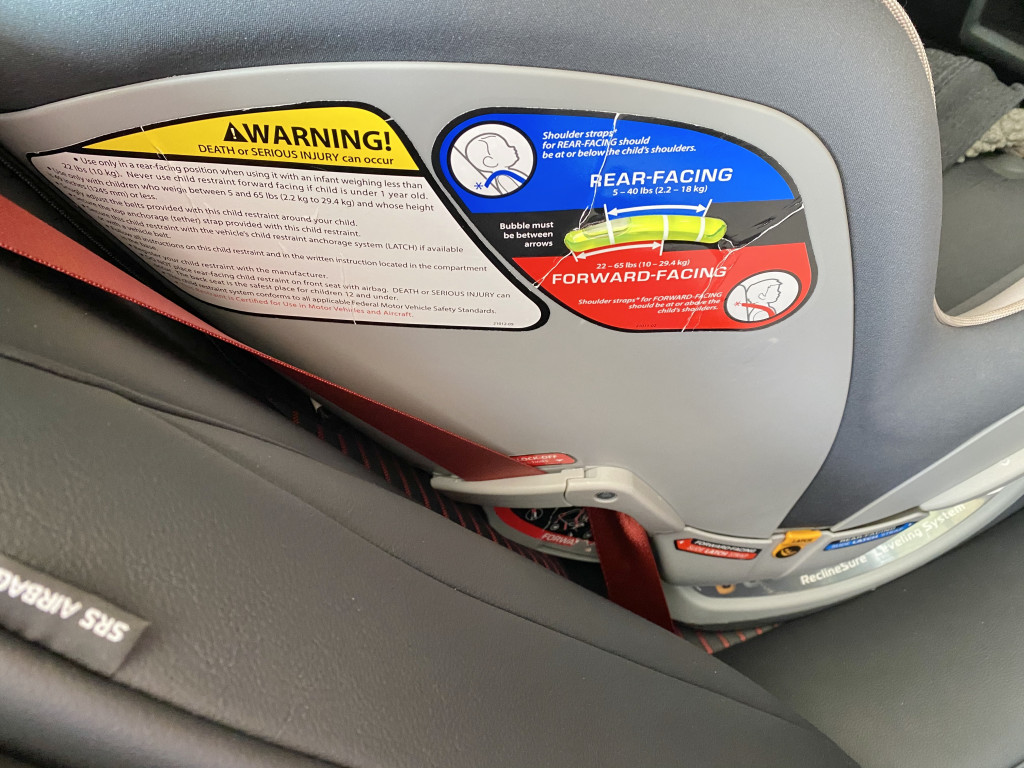 “Look at the seat belts, they are red!” exclaimed my son. It doesn’t take much to impress a kid. Apparently, colored seat belts move the needle. My test car was painted in the $425 optional Supersonic Red with two-tone Midnight Black metallic roof and rear spoiler. The red seat belts went well with the color combo. 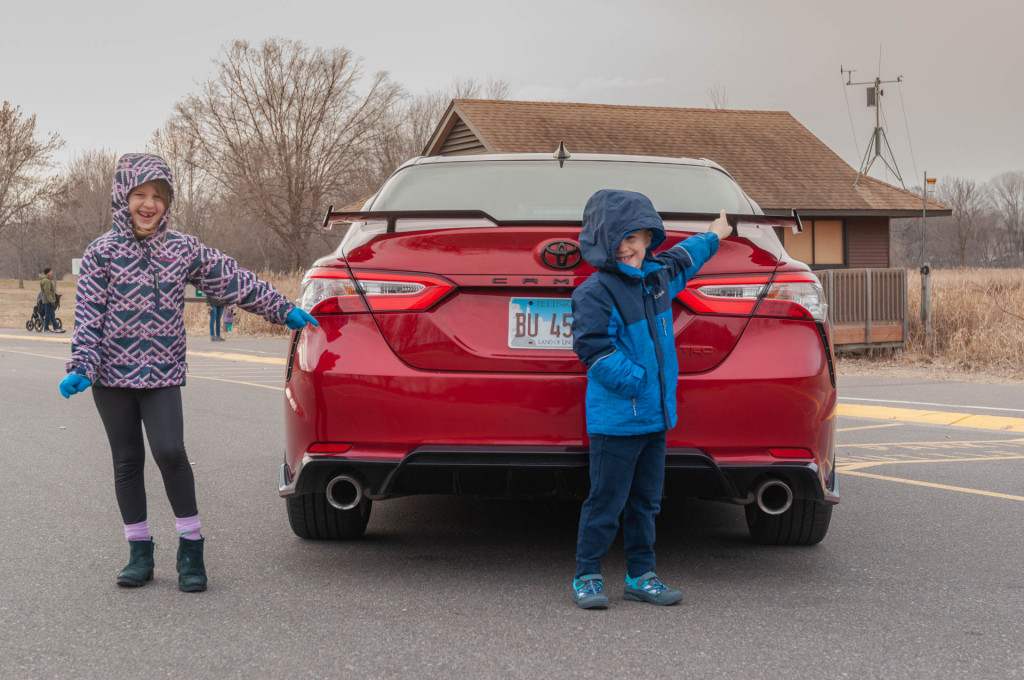 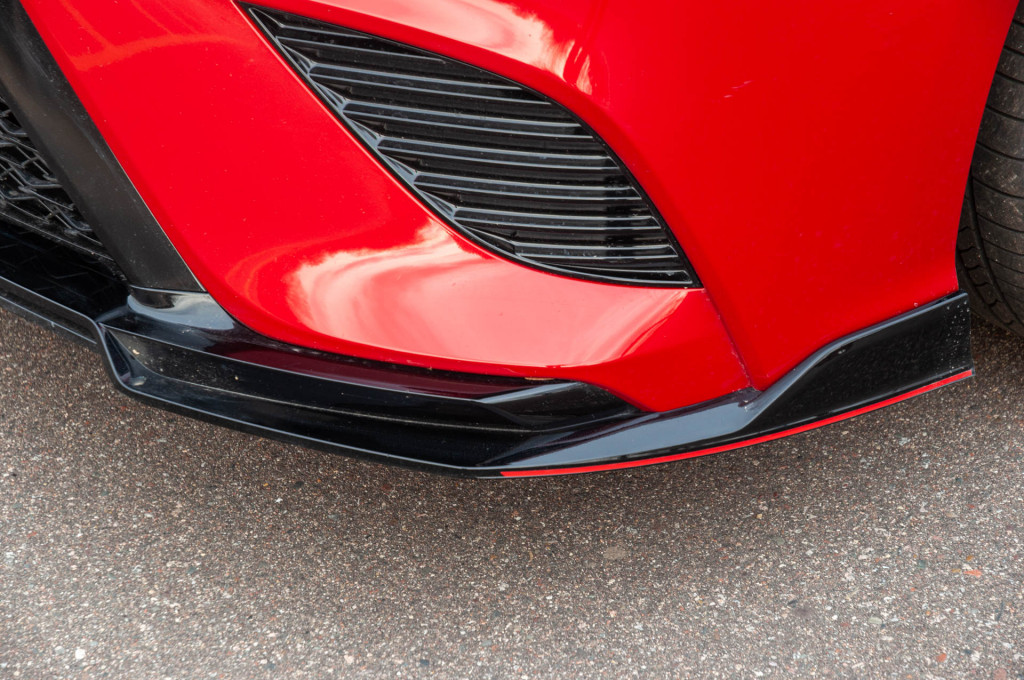 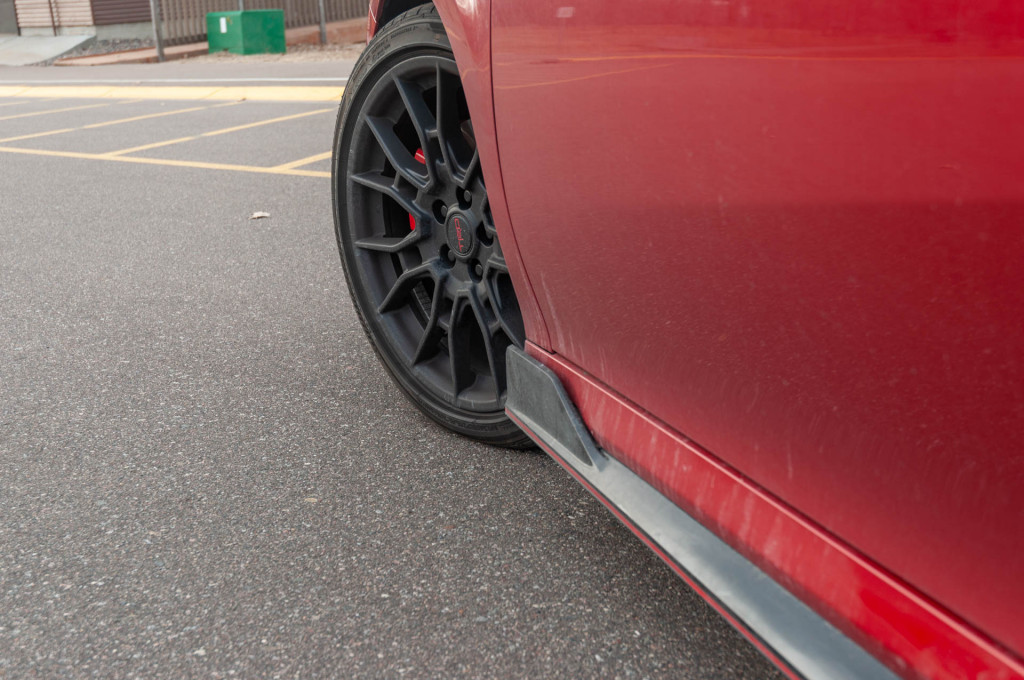 The first thing both kids noticed when they saw the Camry TRD was the wing, and that’s what likely made them think it’s a race car. To me, the bolted-on side sill extensions, front splitter, rear diffuser, and rear wing make this Camry look like an extra from “2 Fast 2 Furious.” There’s a lot going on. It doesn’t look completely cohesive, though it gets the point across loud and clear: this isn’t a standard Camry. 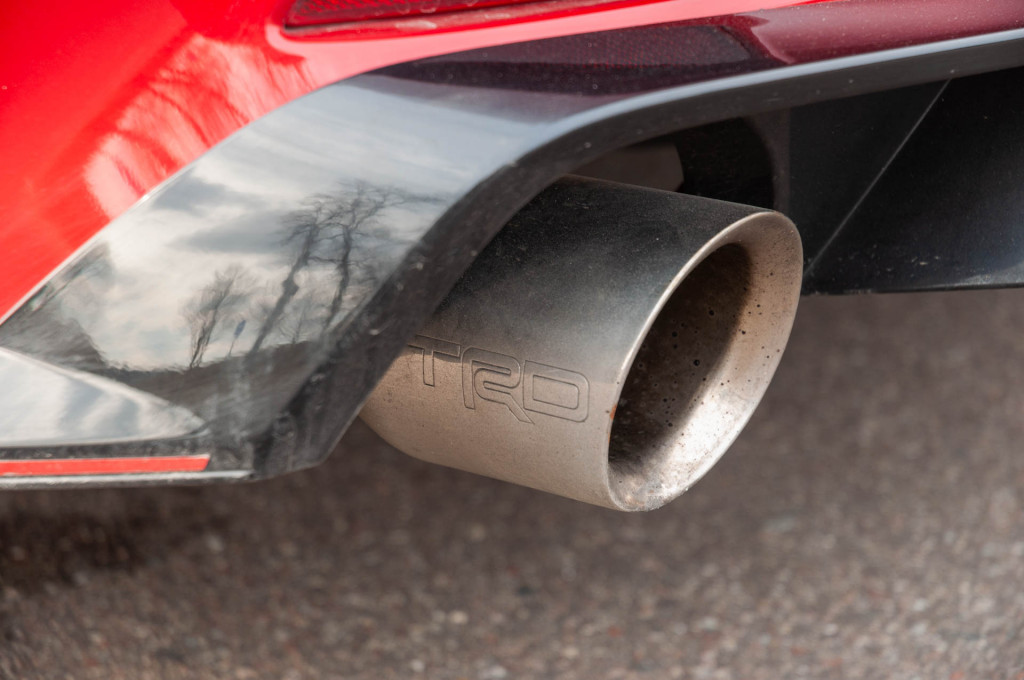 Hit: Supra, is that you?

It took days for me to pinpoint why the sound from the cat-back exhaust was so familiar. It sounds like a muted Supra. While the 2020 Supra uses a BMW turbocharged inline-6, Toyota tuned both cars’ exhaust systems. From inside the cabin, the the howl of the Camry TRD’s cat-back exhaust system is very similar to the Supra’s, both under full acceleration and at low RPMs. It’s never obnoxious and doesn’t drone on the highway. 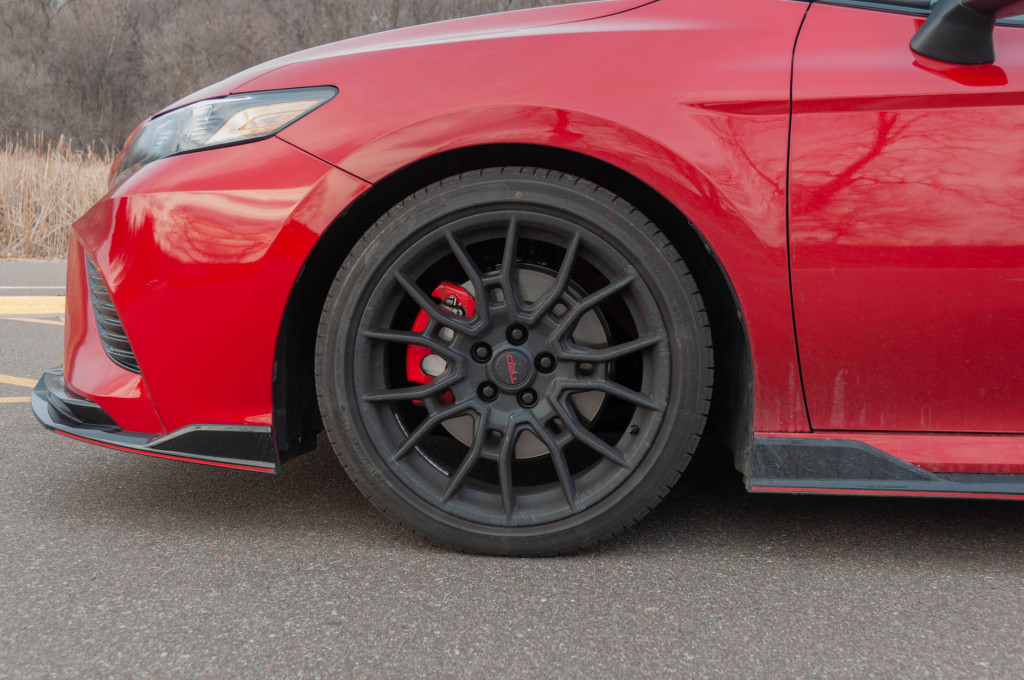 My Camry TRD tester rode on the optional Bridgestone Potenza RE050A 235/40R19 summer tires. They were loud with an annoying howl on cement highways, and their sticky compound kicked up pebbles into the wheel wells with a familiar “ting ting ting.” Continental DWs or Michelin Pilot Sport 4Ss would provide the desired grip without the highway howl. TRD badge, sport suspension, performance exhaust, and body kit or not, this is still a Camry. The standard all-season tires make more sense for most people because they work in more weather conditions and have a longer tread life.

All things considered, the Camry TRD nails the sporty Camry mission with a smooth, strong V-6 engine, a distinct look, and a great exhaust note inside the cabin. It’s a value for those looking to get into a V-6-powered Camry, but anyone considering it should pause to ensure the firm suspension is tolerable for local roads on a day-to-day basis. For most buyers, an XSE model may be more appropriate.