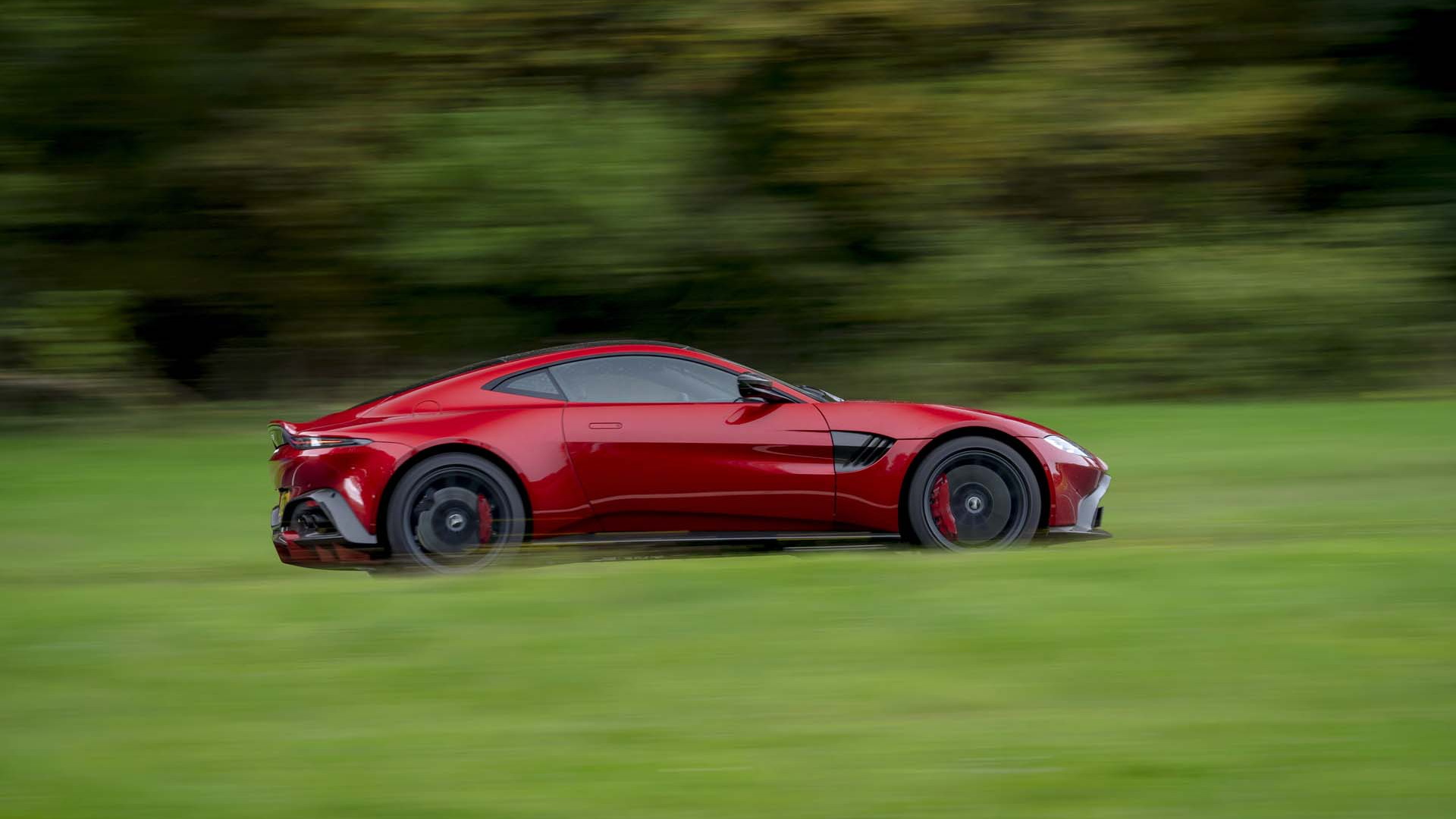 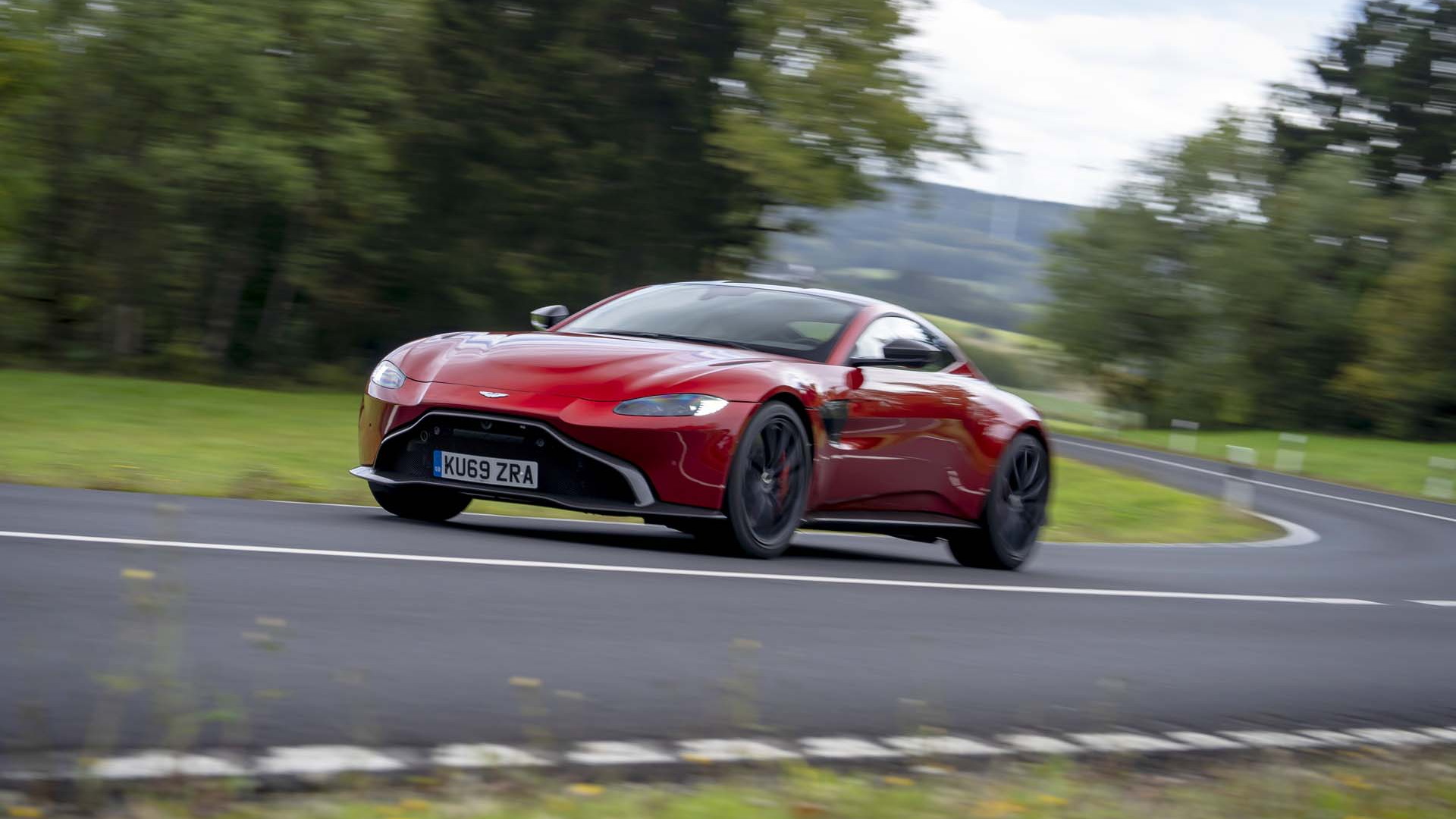 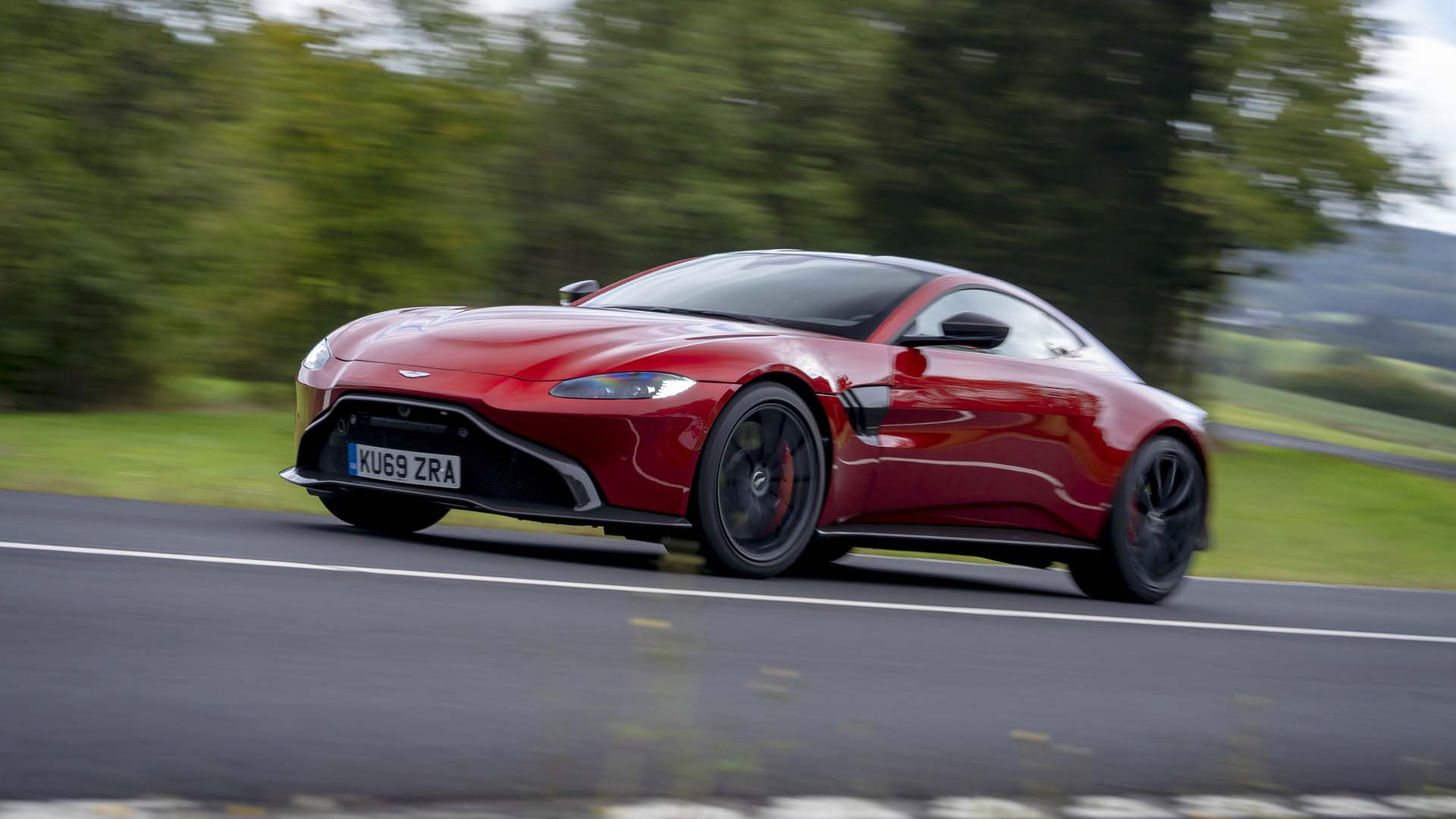 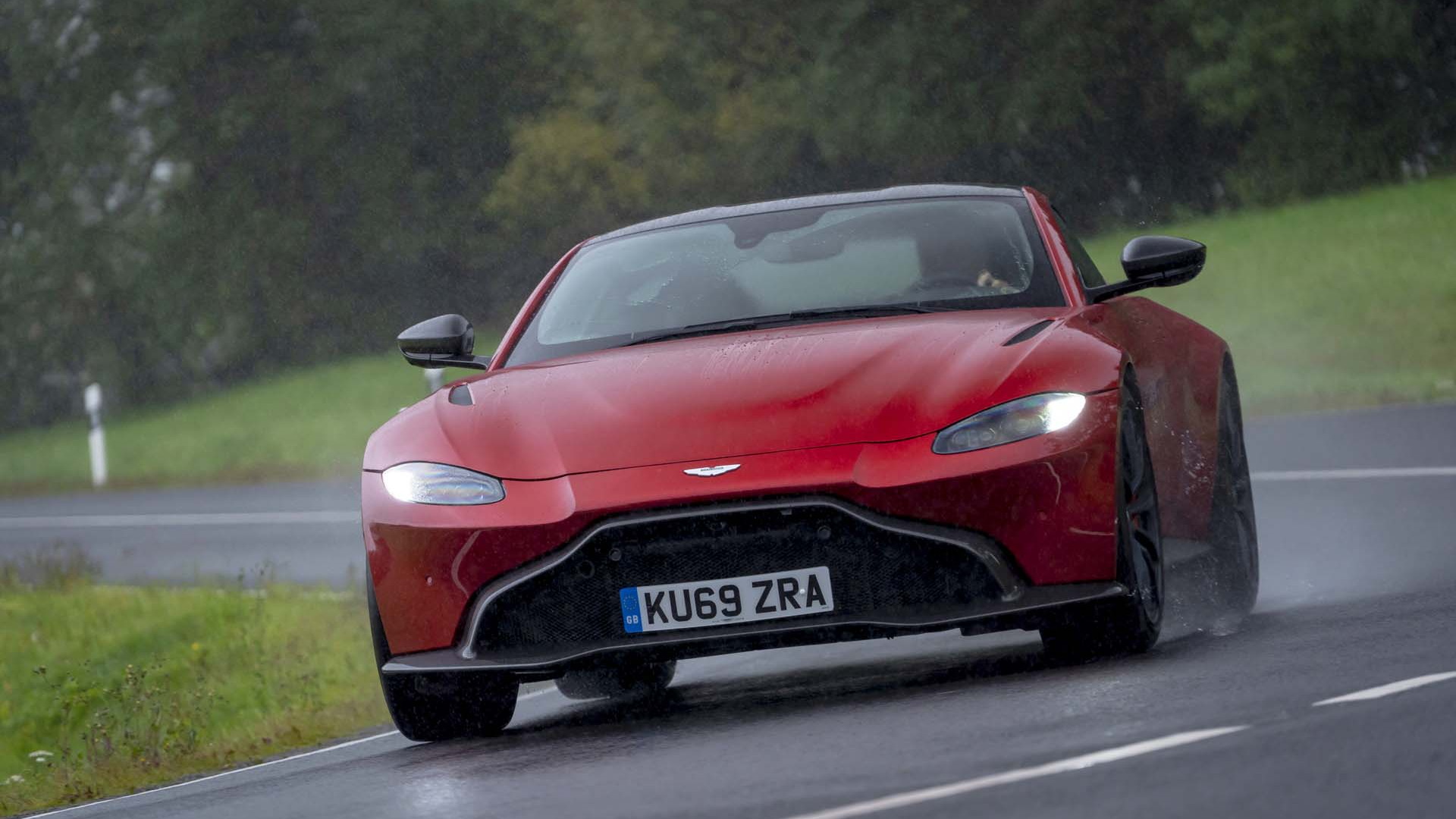 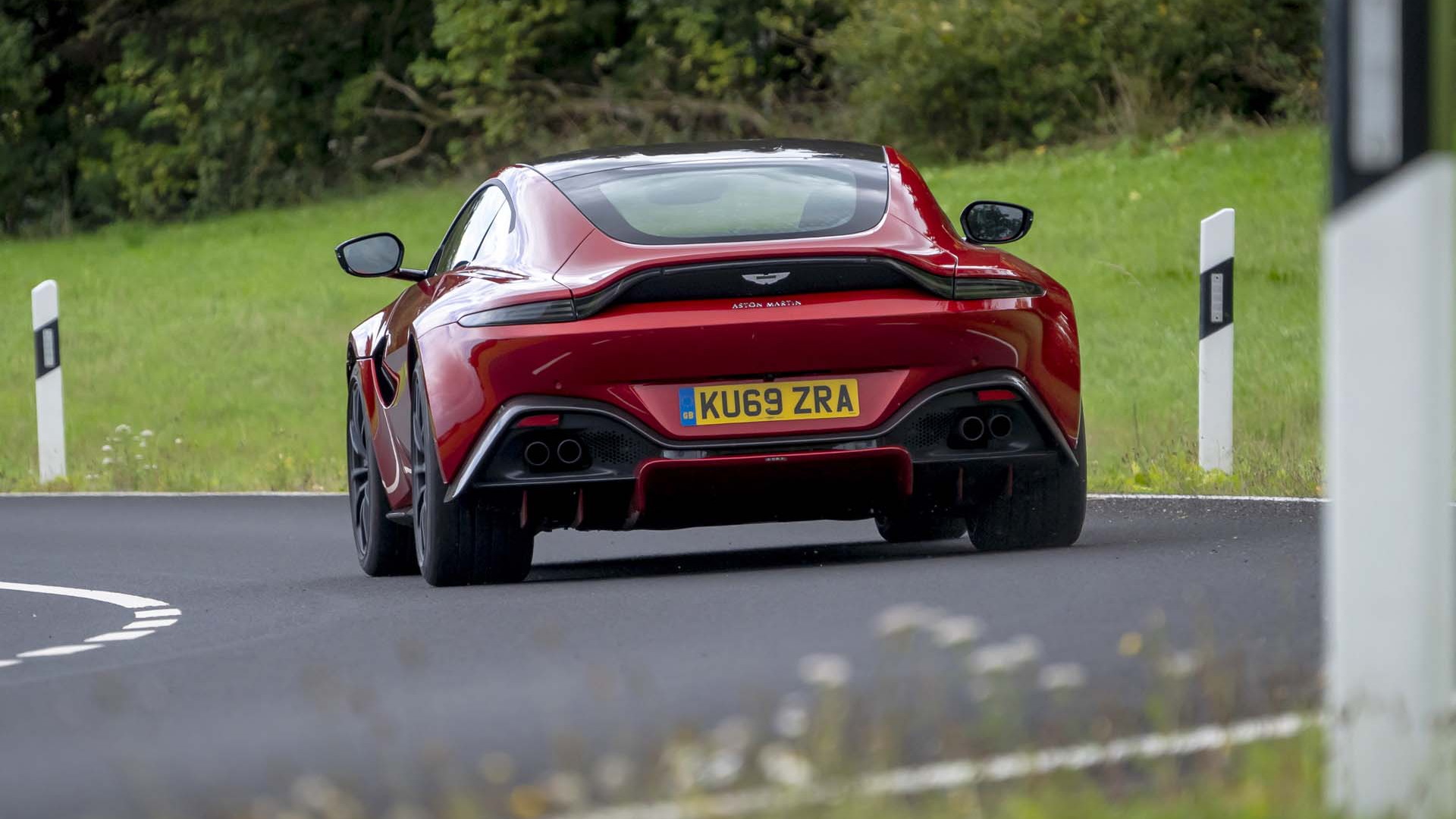 I slot the gearshift of the Intense Blue 2020 Aston Martin Vantage AMR into what is usually 1st gear, and slowly let out the clutch. The car rolls backward, which isn’t good because Aston Martin’s Nurburgring-based AMR Performance Center sits about two feet behind the car and several company reps are looking on.

I engage the clutch, put the other foot on the brake, then inspect the shifter of this dogleg 7-speed manual transmission. First gear is down and to the left. It’s the first time I realize that every gear is in the wrong position. Reverse is up and to the left, while 2nd, 4th, and 6th are up top in the double-H shift pattern and 3rd, 5th, and 7th sit below. It’s all topsy-turvy.

“The dogleg 7-speed is like Marmite,” says Aston Martin lead development engineer Matt Becker. “It’s not perfect, but I actually like that because you have to learn it, and it offers me another level of engagement with the car.”

The comparison may fall flat for Americans, but Marmite is a love-it-or-hate-it yeast-extract paste Brits spread on toast. On first blush, I’m leaning toward hating this transmission.

As I set off to explore the route in the countryside surrounding the Nurburgring (rather than the Nurburging itself, in a cruel bit of irony), I start to find reasons to like this oddball transmission and plenty more to love about the 2020 Vantage AMR.

For starters, the seating position is fantastic and familiar. I’m sitting low in this beautiful piece of British engineering. The steering wheel tilts and telescopes to find the perfect position, my feet are positioned ideally on the pedals, and the center console sits high, where it acts as a comfortable armrest. Atop it is the stubby shifter that slots smoothly from gear to gear. Aston Martin says it benchmarked the Porsche 911’s seating position in relation to the gearshift. I’ve driven the 2020 911, and this position certainly is similar.

The dogleg 7-speed is built by the Italian firm Graziano, and it’s the same transmission that Aston Martin used in the last-generation Vantage V12. Now, however, it backs the Mercedes-AMG-sourced, twin-turbo 4.0-liter V-8 that does time in the V-8 DB11 and a host of Mercedes vehicles, from the G-Class SUV to the S-Class flagship sedan to the AMG GT sports coupe. Despite all its uses, the Vantage AMR is the only car that pairs the V-8 with a manual.

Aston Martin had to make some concessions for the 7-speed manual to work with the torquey V-8. While the engine spins out 503 horsepower and 498 pound-feet of torque in the DB11, it only produces 457 lb-ft of torque here. Of that, only 295 pounds of twist are available in 1st and 2nd gears. Different ECU programming and lower boost levels prevent the V-8 from overwhelming the transmission with the V-8’s immediate torque. That seems odd given this transmission did time behind a V-12, but that engine was naturally aspirated and didn’t create as much torque at lower rpm as this twin-turbo V-8 masterpiece.

Not that it really hurts performance. The Vantage AMR rockets from 0-60 mph in 3.9 seconds versus 3.6 seconds for the Vantage with the 8-speed automatic. I’ll sacrifice three-tenths to row my own. The car hooks up well, sounds a rumbling yawp, and rockets toward the horizon on its way to a top speed of 200 mph.

Two drive mode controllers on the steering wheel cycle through Sport, Sport+, and Track modes (no Normal or Comfort settings here; the Vantage is Aston’s track-ready sports car). The selector on the left handles the adjustable and adaptive dampers; the one on the right controls the engine and throttle response.

I opt for Sport+ for the suspension and Track for the powertrain on these scenic German roads set among evergreen forests. Track isn’t the most aggressive engine mode. It provides more progressive throttle response than Sport+, which is tuned for peakier, more immediate power delivery. Both modes create a more present and snarling engine note and send delightful crackles out of the exhaust every time I let up on the throttle.

The route changes from two-lane B roads to tight, low-speed village streets to multi-mile autobahn blasts to twisty mountain passes. The engine and transmission play well in all scenarios, but I don’t necessarily play well with them.

The shift gates are close together so it can be easy to shift from 2nd to 5th or 3rd to 6th. The bigger issue, though, is not knowing where the next shift is supposed to go, up or down. When I’m in 3rd, I want to shift down to get 4th, but the action is up and vice versa when I downshift. It’s all backward, and, on occasion, it causes me to leave the transmission in the current gear rather than downshift.

There’s a method to the transmission’s madness, though, and it has to do with motorsports. The 2nd to 3rd shift is directly up and down instead of offset, and they makes this transmission ideal for road racing that often requires that shift, but up and down. Still, so far it seems wrong.

Oddly, downshifts aren’t an issue when the road turns twisty. Given the fact that the engine puts out its full torque in 3rd gear, but not in 1st or 2nd, there is no need to downshift to 2nd when entering switchback turns; the torquey V-8 is likely putting down the same amount of power at the exit of the turns in either gear.

Aston Martin also helps drivers make those downshifts. The manual is teamed with AMShift, which provides downshift rev-matching and no-lift upshifts. The advantages of rev matching are obvious, but it’s also cool to keep your right foot pinned to the floor when engaging the clutch and changing gears.

Aston Martin says the Vantage’ reaches its top speed in 7th gear, which means it’s not entirely a fuel-economy play. Traveling at about 100 mph on an open stretch of the autobahn, I put my foot to the floor and let the car build speed. I get to 158 mph before I see traffic ahead and let off. Foolishly, I didn’t bother to downshift, and I’m sure I could have gone 20 mph faster in the same space had I run the V-8 out to its 7,000 rpm redline in 4th, 5th, and 6th gears. Then again, triple-digit speeds are terrifying as soon as you see traffic, so maybe building speed slower was a better idea.

My drive partner seems to have more of a problem with this oddball transmission. The smell of clutch hangs in the air after a couple of aggressive launches—likely with 1st not fully engaged—and eventually 1st and reverse become hard to access. This isn’t right. The other gears seem fine, but later, at the AMR Performance Center, Aston Martin engineers tell us that we've lunched the clutch. (Note to Aston Martin: I apologize for any role I may have played in the torturous death of your clutch.)

As the sportiest version of Aston’s sportiest car, the Vantage AMR swaps out cast-iron brakes for carbon-ceramics, comes standard with the manual transmission, and weighs 220 pounds less than the standard Vantage. Of that total, 154 pounds are attributed to the manual transmission swap, and the rest are a combination of the brakes, lighter forged alloy wheels, and the switch from an electronic-locking, limited-slip rear differential to a mechanical rear differential.

The Vantage platform is shared with the DB11 and DBS but has a wheelbase that is 3.9 inches shorter and it’s 11.2 shorter overall. The Vantage also gets the sportiest suspension settings. According to Becker, the springs, dampers, and anti-roll bars of all Vantages are stiffer by about 15 percent, and the rear subframe is hard-mounted to the chassis rather than isolated.

The combination of the shorter wheelbase and stiffer tuning has its pluses and minuses. The lost length is in the rear, where the DB11’s rear seats are. That brings the rear tires closer to the driver’s position, and this teams with the stiffer tuning and hard-mounted rear subframe to send jolts up through the driver’s seat. Track mode becomes almost unbearable on anything but glass-smooth roads, though Sport and Sport+ are acceptable. No mode, however, matches the DB11’s comfortable grand touring tuning.

However, I don’t really need any mode other than Sport to have a blast in the twisties. The Vantage AMR’s near-perfect 51/49 front/rear weight balance, stiff structure, and short length make it agile and ready to attack any bend. On the mountain passes, it never tries to push and never tries to oversteer. It just keeps doing what I tell it to through the sharp steering  (13:1 ratio) and strong, progressive carbon-ceramic brakes. It’s a true sports car.

And, in my mind, a true sports car should have a manual transmission. This dogleg 7-speed certainly takes some getting used to, but by the end of the day I have a better feel for where the gears are and how to better control the powertrain through the shifter, blown clutch and all. After a few more days, it would be absolutely natural.

“I used to hate Marmite when I was a kid, but now I really like it,” Becker tells me.

I’m not sure about Marmite, but I’m starting to like this oddball transmission, and I really dig the Vantage AMR it serves.