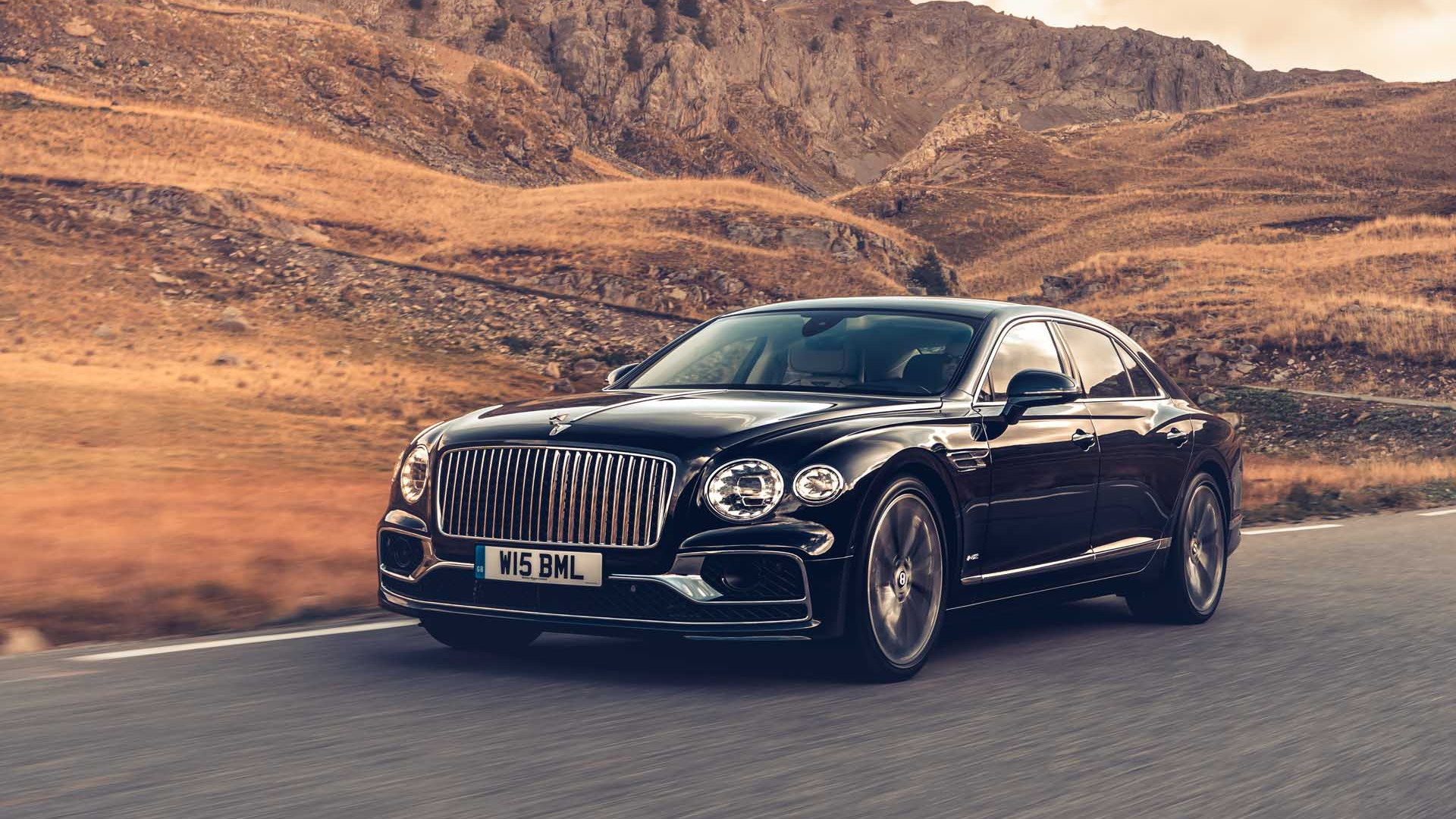 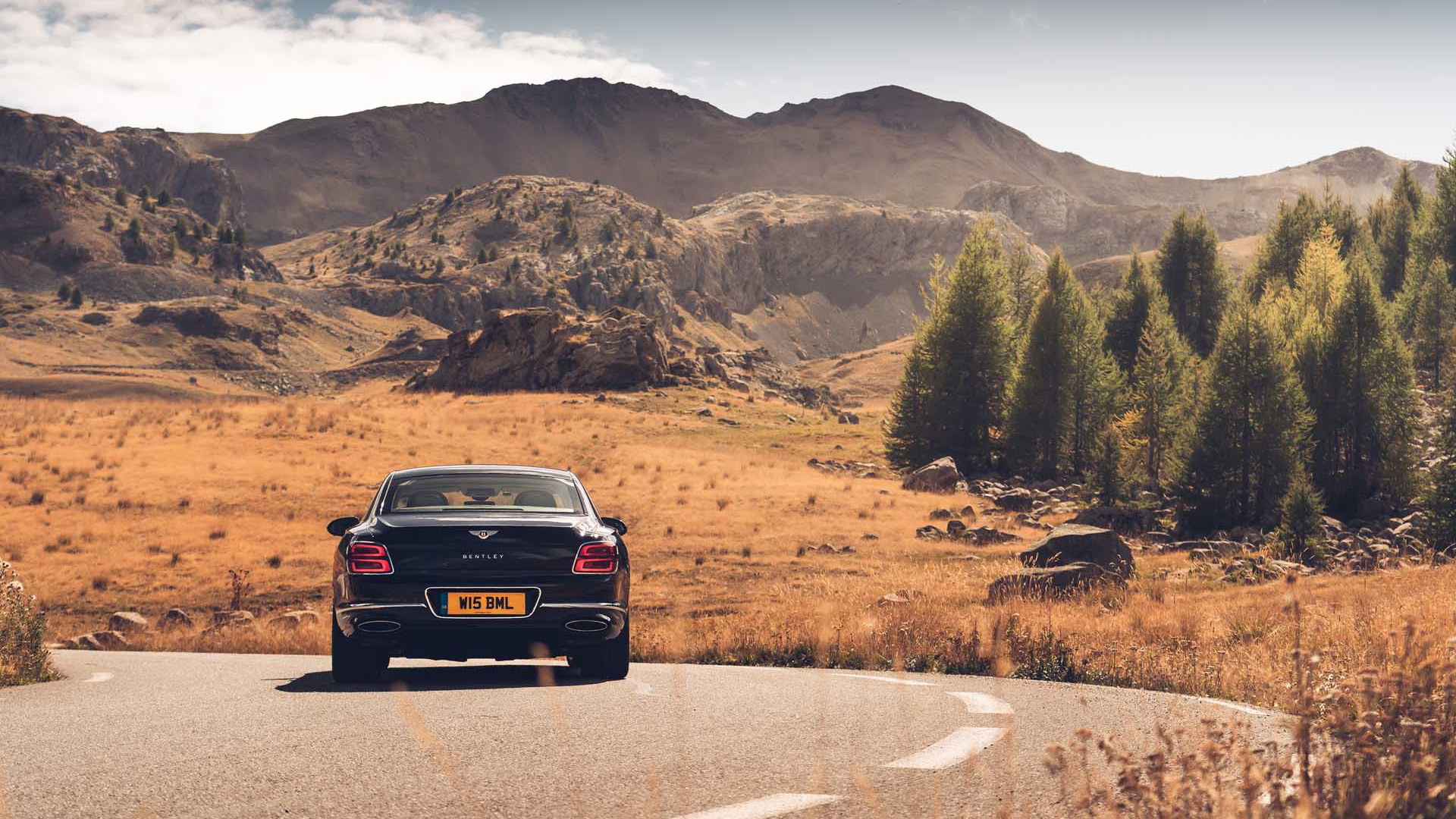 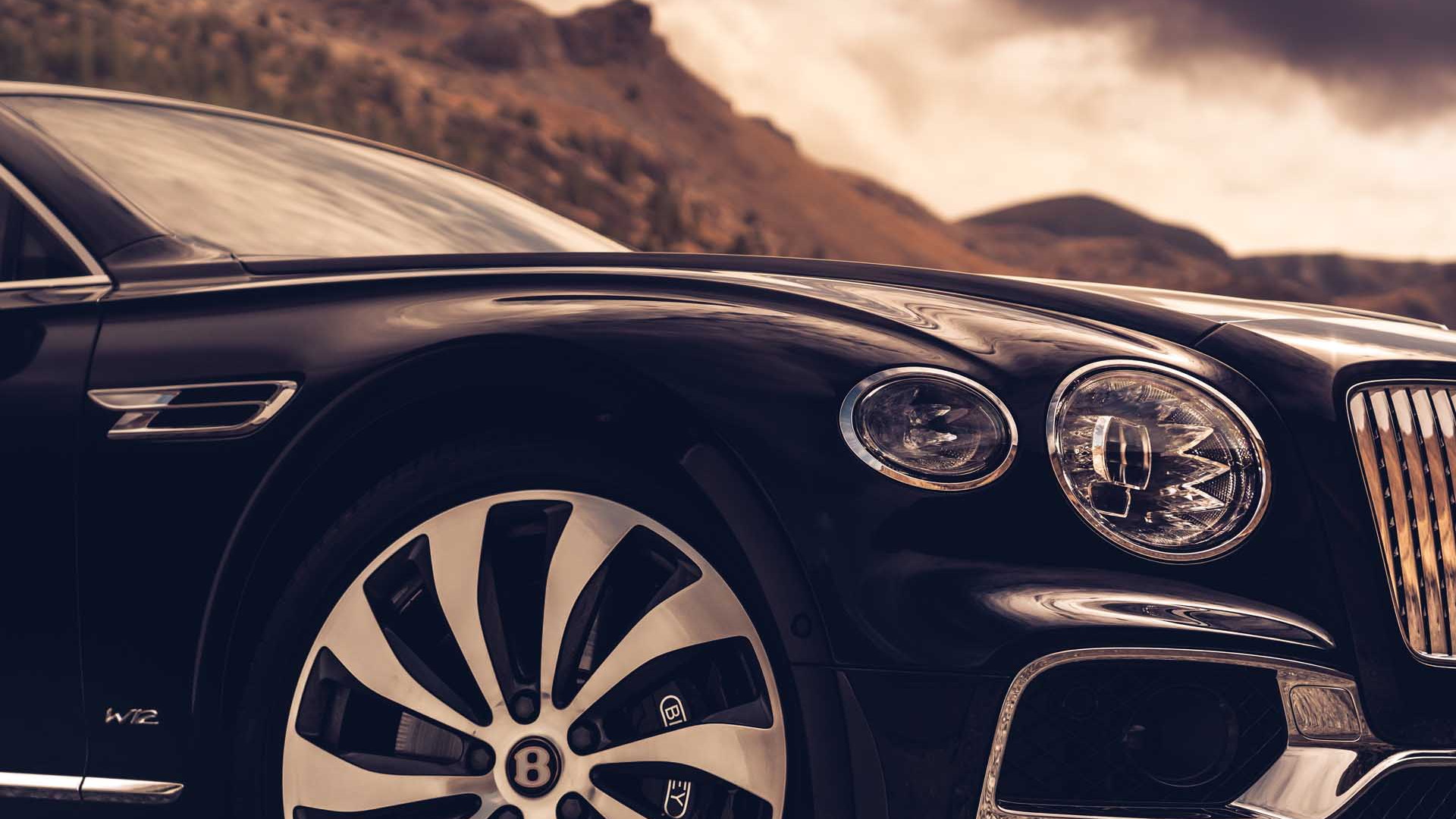 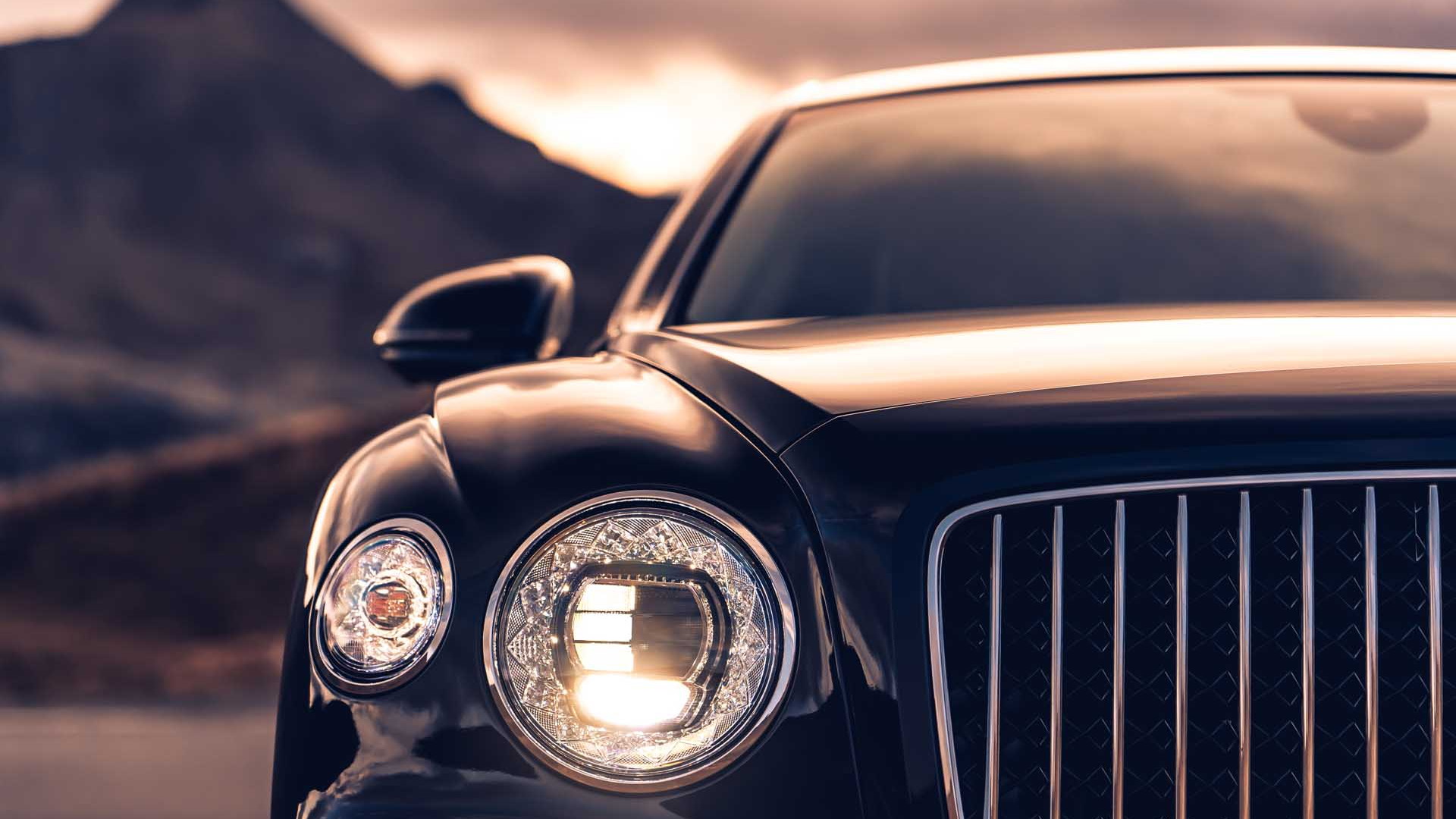 It takes 10, maybe 15, seconds before grown adults are reduced to toddlers in the 2020 Bentley Flying Spur.

That’s just the way it is.

Have you rubbed your toes into the thick-pile carpet that felt like stroking a sheepdog with a perfectly coiffed, high-and-tight flat-top? That’s the Flying Spur.

The thin felt that is stretched into every nook of the glove box and the rear center console must be like the 18th green at Augusta. Must be.

Don’t get me started on the diamond-quilted leather shod on the massaging seats that adjust and stretch out my spine in ways better than Bikram and just as embarrassing for others to watch. My smile grows, and my stress melts. Namaste. Now shoo, hoi polloi.

Then there are the things that are designed to be touched. There are four touchscreens in the Flying Spur and somehow the most impressive one is also the smallest. A 5.0-inch screen automagically protrudes from its black perch on the center console between the two rear seats.  It becomes a remote control for opulence. It weighs about 8 ounces, has knurled metal on the back, and can raise or lower the Bentley Flying B on the hood—synchronized to the animation on the digital screen, of course. The handheld remote is included in what history guessed the future would be like in 1969—a remote for everything and personal robot masseurs. The only thing missing? Two matching keyholes for rear passengers that need a synchronized turn to bring forth the magic touchpad remote. (Just press the small eject button on the top right, instead.)

It’s a new world inside the cabin of the Flying Spur. A world of textures and materials, worth touching to commit to sense-memory what each hide, surface, wood, grain, metal, texture, and stitch feels like. The feeling doesn’t leave in the Flying Spur for oh, at least 250 miles—the amount of time I could sit in one.

The Flying Spur sedan dates back to the automaker’s days before it was just a different grille slapped onto a Rolls-Royce. It’s the more comfortable companion to the Continental GT—it was called the Continental Flying Spur—suited for four adults, and just as powerful. It’s not a pure luxury sedan; it’s tuned specifically to be a driver, too. It’s part of Bentley’s DNA, since the Turbo R defined what a modern Bentley sedan should be.

According to Bentley, fewer than one in 20 buyers will purchase a Flying Spur to be solely driven in it. That’s an astonishing number to me, considering how many things there are to touch, feel and experience. About two in five buyers will drive the Flying Spur and be driven in it, which means they’ll have even less time to touch things.

The knee-slapping, spit-on-the-floor, gut-punching reality? The rest of the Bentley Flying Spur buyers actually want to drive the world’s fastest four-door sedan. It’s not surprising, considering more than half of luxury jet owners are also certified pilots. That’s not to say piloting is a lucrative career; no, no. It’s that mentality among the wealthy set who buy cars that cost more than $200,000 to start ($214,676 in the case of the Bentley Flying Spur) that everything must be mastered, business to cars.

For those people—more than half of buyers, says Bentley—the Flying Spur’s rewarding W-12 and 8-speed dual-clutch automatic dole out a silky finish like chocolate mousse after dinner. The Bentley’s hand-built 6.0-liter W-12 churns out 626 horsepower and 664 pound-feet of torque, identical to the Continental GT. Not identical to the Continental GT: The Flying Spur’s top speed of 207 mph, faster than the Alpina B7, and 0.26 times the speed of sound of Vivaldi cruising through the sublime 21-speaker Naim system.

You could light the Flying Spur’s fuse and sprint up to 60 mph in 3.7 seconds. You could chirp the rears in Bentley’s new all-wheel-drive system that only sends power to the front wheels when the rear tires, which still have some sidewall after being stretched around 22-wheels, give up their herculean task of moving more than 2.5 tons. You could press the Flying Spur into sport detail despite lugging more hide than the Horween Leather Co.

The Flying Spur shoulders into corners like a grizzled fullback, but with all of the grace of a princess and all the right looks. Thanks to rear-wheel steering that dials in just 1 degree of relief for overburdened front tires in a similar direction, the Flying Spur’s 125.8-inch wheelbase gets cut down to less than three yards—instead of the mile-and-a-half wheelbase it feels like from the inside. (The rear wheels can countersteer to the fronts at up to 4.1 degrees at lower speeds, which is far more useful for parking.)

The W-12 sounds like it could use another day at finishing school when the accelerator is mashed even though it’s kind and attentive. The same goes for the 8-speed, which clunks into an unrefined shift when the work of hauling so much mass from 35 mph to 80 mph is summoned, immediately. First of the first-world problems, really.

The real magic is done by a three-chamber air suspension at every corner—a first for the Flying Spur, somehow—paired to continuous damping control systems that watch every move the wheels make like the CIA. One wrong foot in the Flying Spur and the systems fire off orders to the suspension quicker than missile command.

It’s possible to miss the Flying Spur’s exterior, but impossible to look away once you notice it. The Flying Spur four-door sedan, like the Continental GT that it’s based on, has fine features that are neither “delicate” nor “handsome.” Instead, they’re subtle and striking at the same time, like the flavors of 18-year-old whisky that whispers oak and vanilla but burns like hell on the way down to your gut.

It’s also impossible to miss the wide grille with thin vertical chrome slats that punch your face with polished silver knuckles. Bentley chief exterior designer JP Gregory, a man who’s stylish, genteel, but also wiry like the chrome knuckle-dusters, worked hard to place the four round headlights around the Flying Spur’s grille in a way that makes you forget about the Bentayga’s drunk, 1,000-yard stare. The Flying Spur’s LED headlights, which burst white refracted light into the gentle Monaco night like the brief reflection from a 2.5-karat boat anchor hanging on to a thin tanned finger, are flanked by round and smaller lights. Those lights sit on top of a lower front fascia with chrome stretched dental-floss thin, curved around the wheel arches, and double backed with all the tension of a strung bow.

There is visual tension at all four corners of the Flying Spur. The front wheels, up to 22 inches large, are pushed ahead 130 mm on the platform that it shares with the Porsche Panamera, which creates a shorter front overhang on the Bentley sedan. The front fenders reach over the tall wheels thanks to a superformed process that Bentley created, which sucks hot aluminum into a press to create seamless panels with softer lines and fewer flaws than newborns.

That process also makes impossibly tall body sides with deep creases that blanket the lower doors with sheer darkness that requires a second look: That can’t be a different color, is it? The wide, rear haunches drape over squat 315-mm tires that are the Danny DeVito of rear rubber; they look almost as wide as they are tall.

In back? B-shaped taillights that whisper the W-12 engine’s prolific firepower into the wind, which is long since gone behind you.

That early Continental Flying Spur, a coach-built HJ Mulliner sedan, was powered by half the cylinders but was almost just as long—less than a foot shorter.

Chief designer of Bentley in the late 1950s, JP Blatchley, and lead engineer Ivan Evernden dispatched Mulliner and designer Arthur Talbot Johnston wanted, needed, begged for a four-door grand-touring car to lead the brand ahead. Johnston’s Scottish clan coat of arms of a spur with wings even gave the sedan its name.

My 2020 Flying Spur to drive in and around Monaco, a Dark Sapphire on Linen and Burnt Oak leather sedan, designed by JP Gregory, cost $214,600 and is dripping with pretty and far outside my reach. It too is a coach-built affair.

But at least I can touch it.