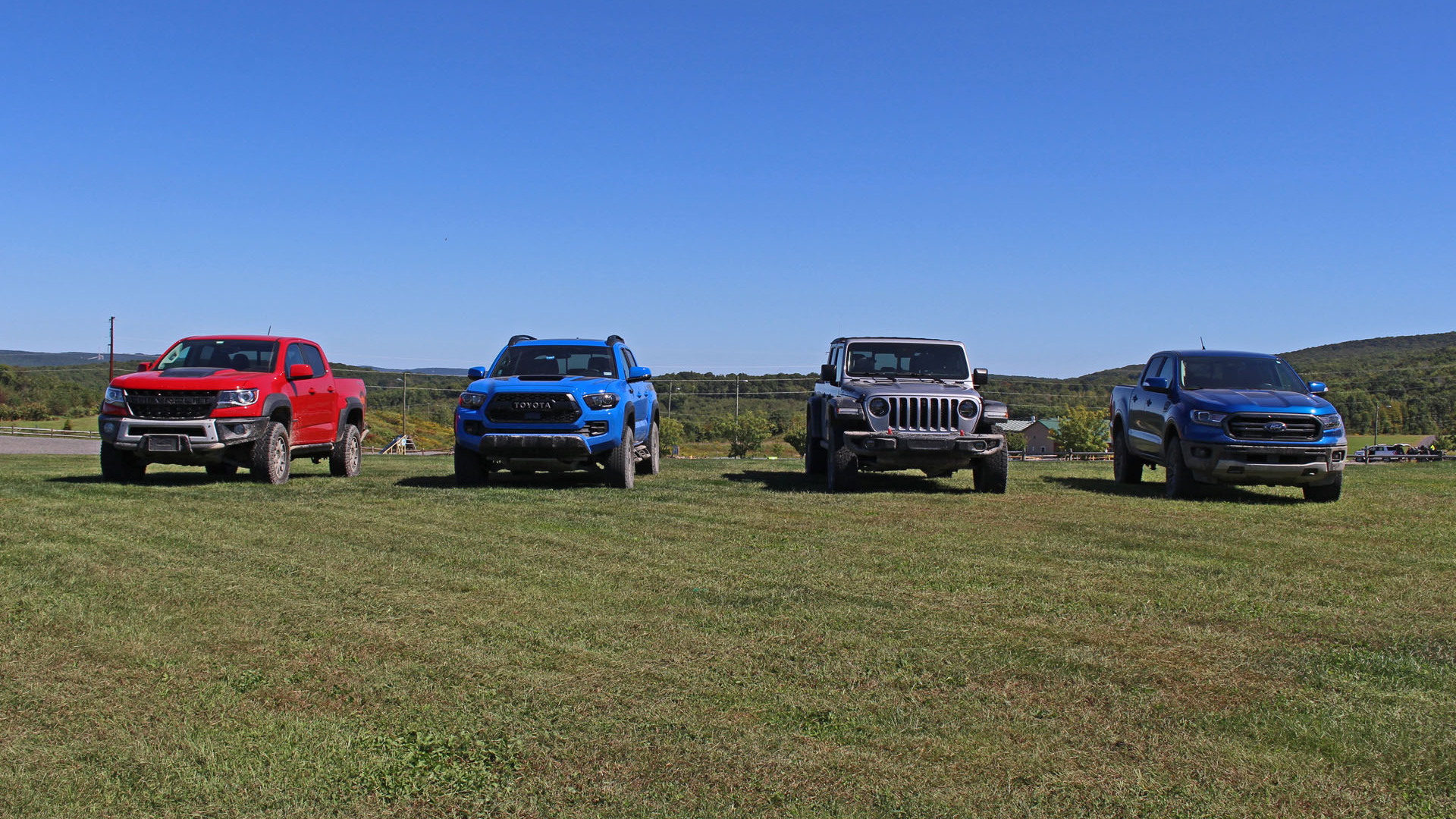 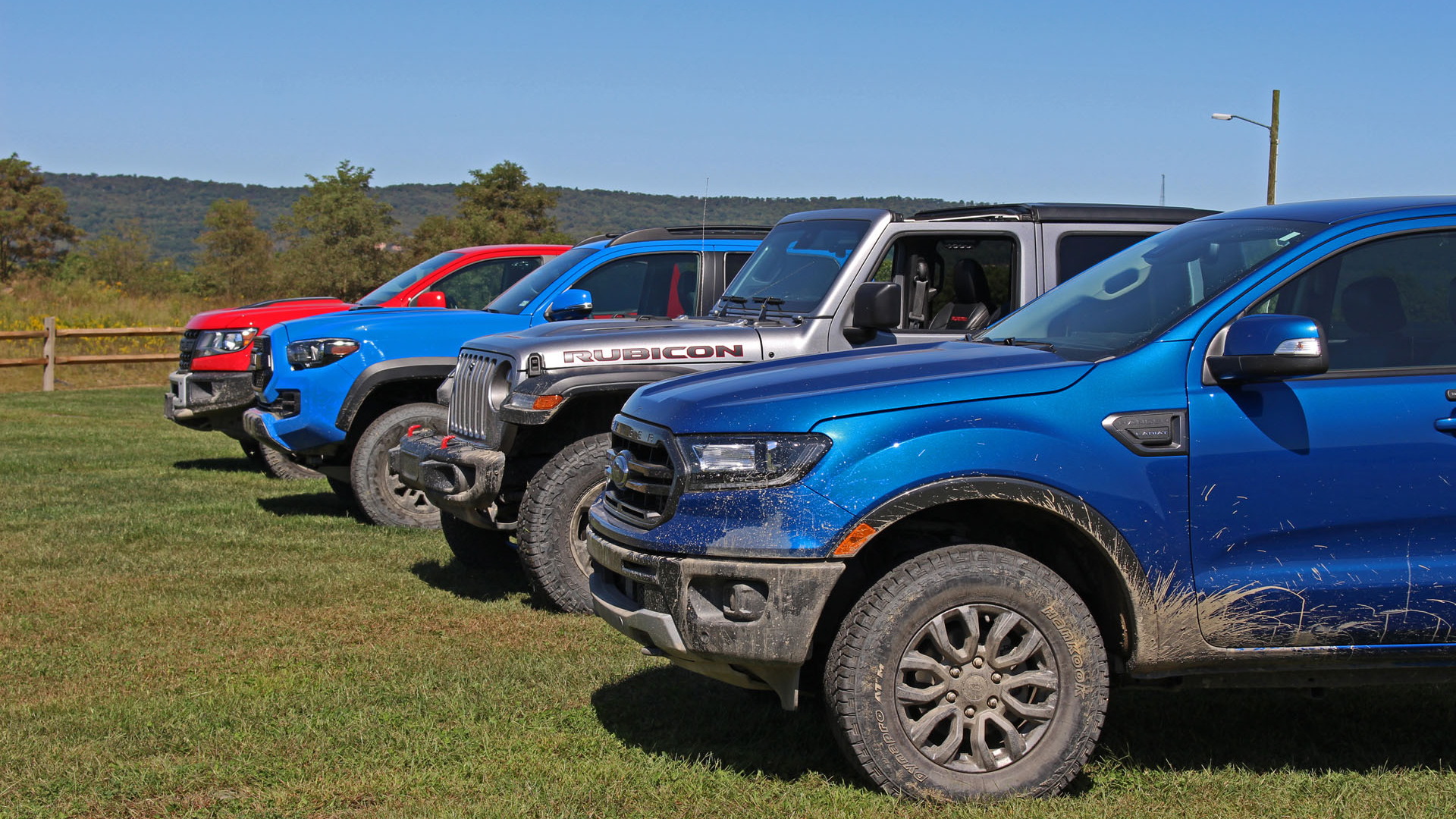 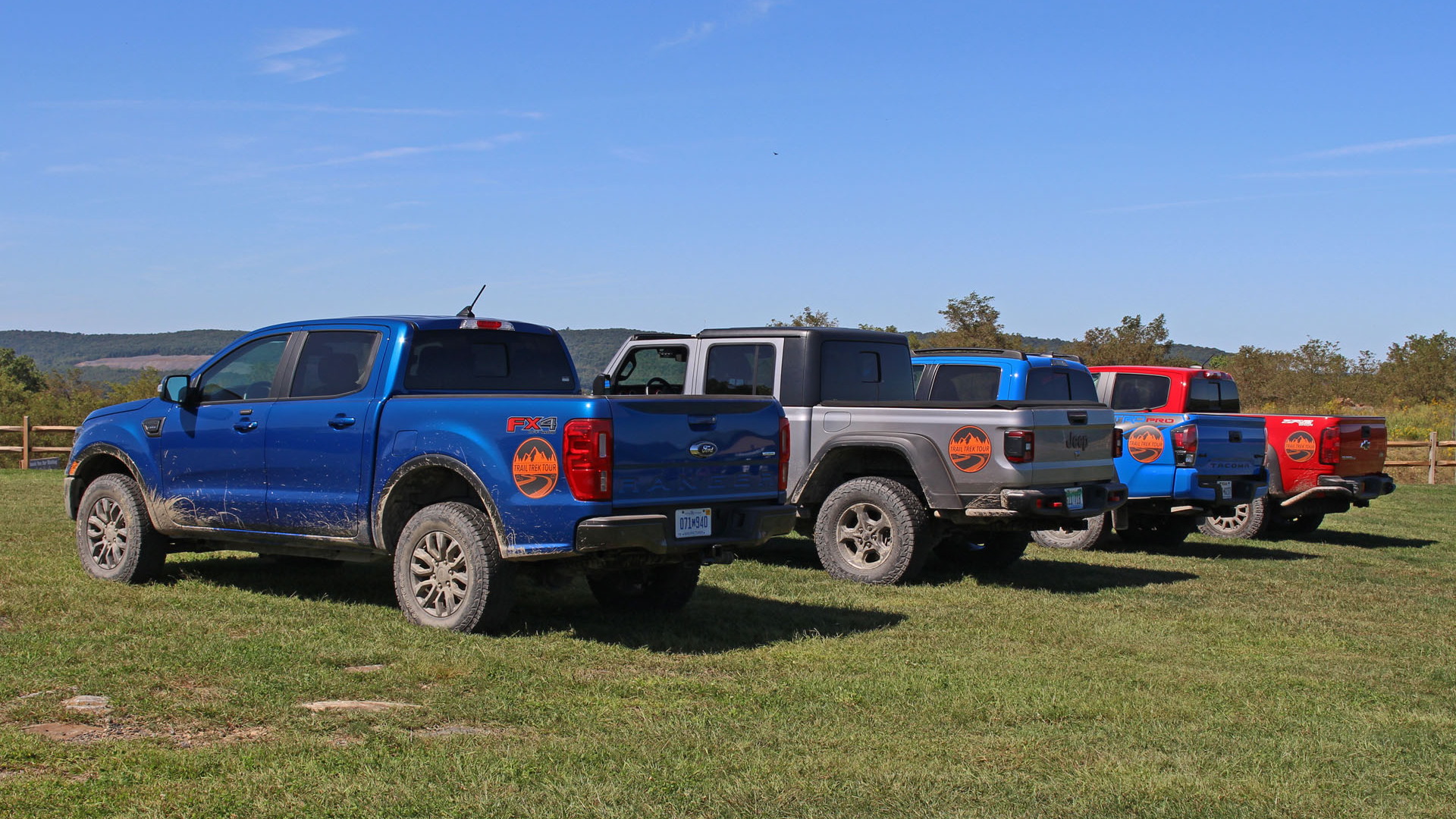 It's not that often that we have the opportunity to sample competent off-roaders back-to-back in their natural habitat, so we couldn't pass up the chance to compare them. After eight hours in the hills of Coal Township, Pennsylvania at the Anthracite Outdoor Adventure Area, it took only minutes of deliberation to rank these trucks from worst to first. Eager to see how they stack up in terms of off-road prowess? Let's jump right in. 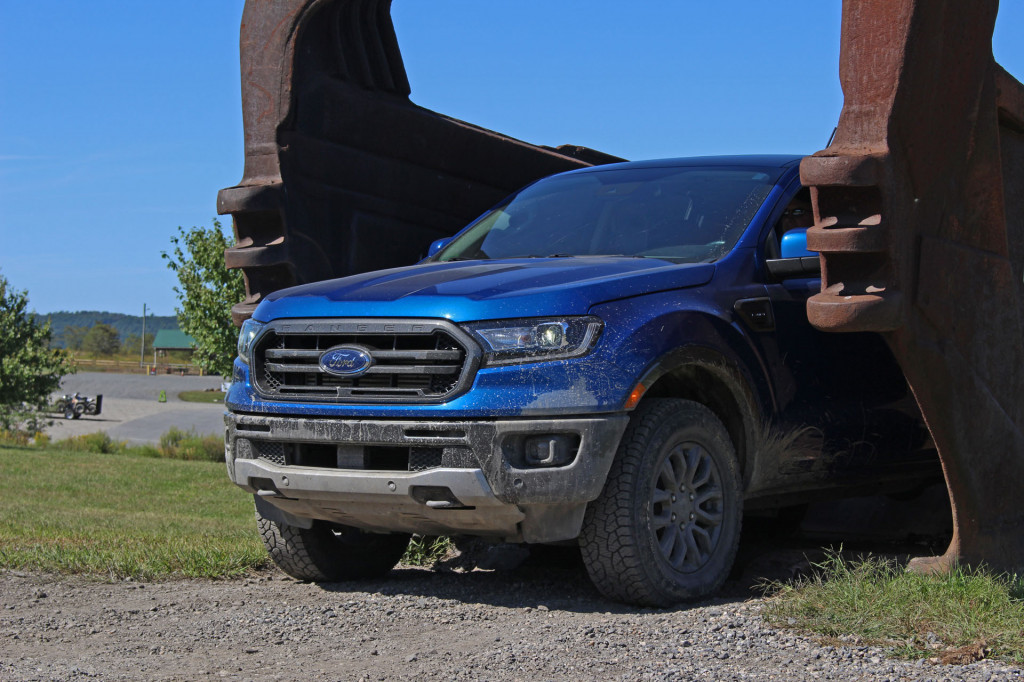 The Ford Ranger is one of the two newcomers in this group, and Ford hasn't yet shown much interest in giving its new mid-sizer serious off-road chops. While a Raptor variant of the Ranger is offered overseas, Ford seems content to target the mainstream market here in the States. Besides, the type of high-speed, open-country running at which the Raptor formula excels wasn't in the cards here.

That's not to say the Ranger proved ill-suited to the task at hand. Ford may not be going hard at the off-road niche, but its FX4 package is no slouch. It comprises an electronic locking-rear differential; an off-road tuned suspension; 17-inch wheels with Hankook Dynapro ATM tires; and fuel tank, transfer case, and front-differential skid plates.

Other niceties include an off-road display for the digital cluster, a terrain management system, and off-road speed control. The FX4 package also deletes the front air dam for an improved approach angle.

The alphanumeric FX4 name may not be as marketing-friendly as the terms Rubicon or Bison, but it gets the job done. Despite having the same available ground clearance as the Colorado, the Ranger's underbody seemed keen to locate larger rocks and other such obstacles a bit more regularly.

We weren't huge fans of its numb, distant steering, which was made much worse by airing down the tires. We're inclined to blame Ford's for its tire choice, and for the excessively soft suspension had us taking extra care with ground obstacles, lest the exaggerated suspension oscillations bring a critical underbody component down on top of a sharp protrusion we thought we'd already cleared.

Ford's FX4 package is good enough, but not great. It's clearly meant to deliver a comfortable enough ride for the daily grind while still offering off-road capability, but that concession robs it of precision and dependability when the going really gets tough. We spent a lot more time second-guessing ourselves in the Ranger than we did in the other trucks, and we couldn't trust it to straddle nastier-looking rocks without consequences.

The Ranger survived the day little worse for wear, but it didn't inspire confidence the way its competitors did. We suspect Ford has something more up its sleeve for its new mid-sizer, but we'll have to wait and see. 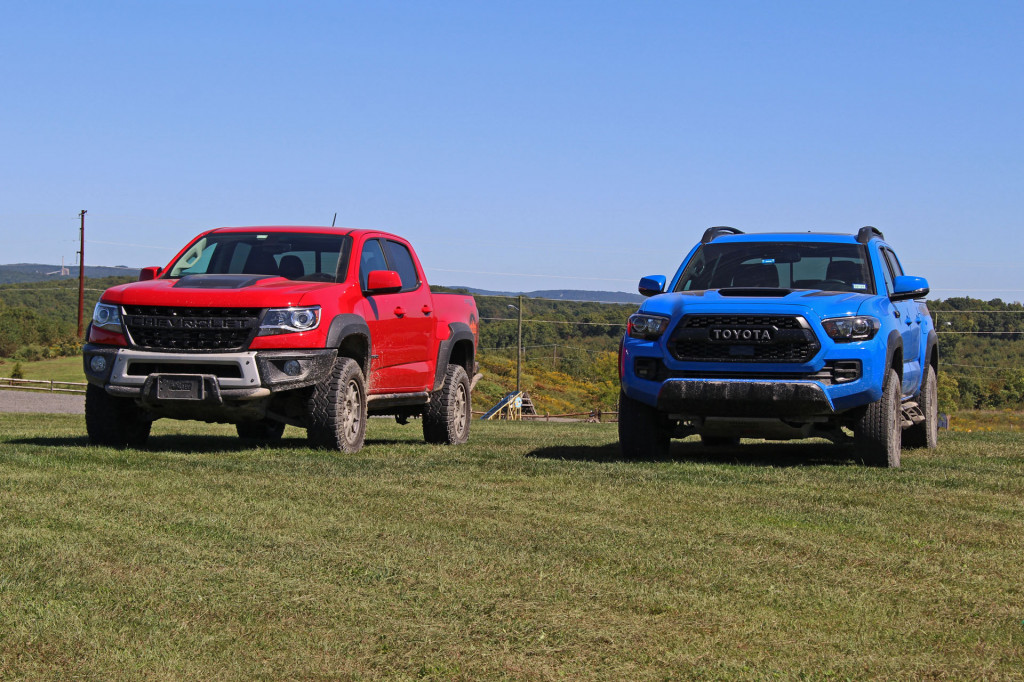 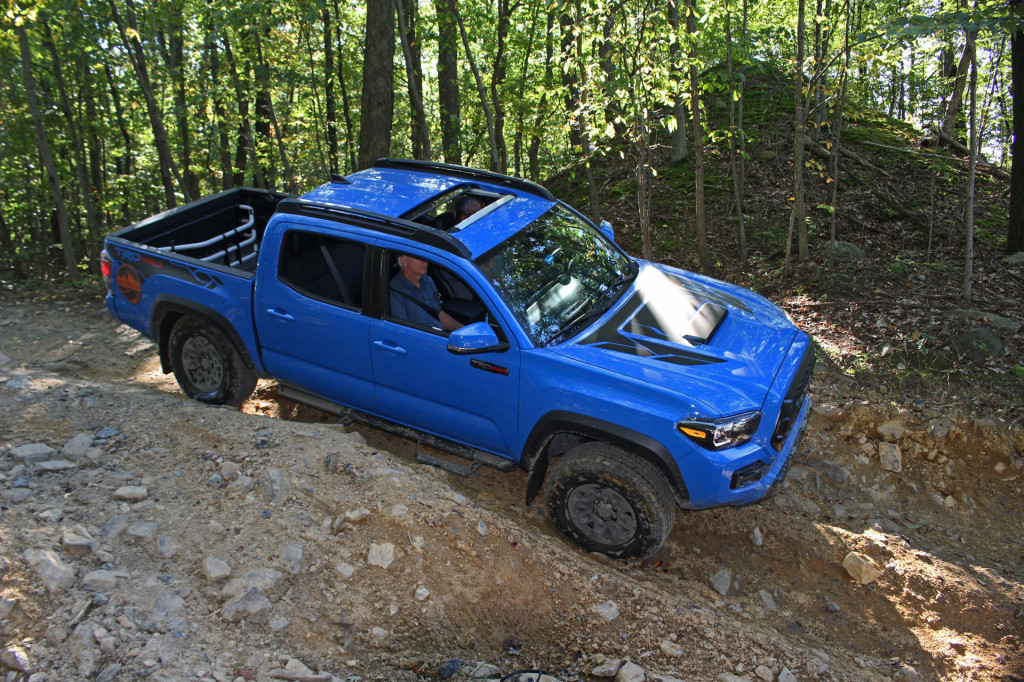 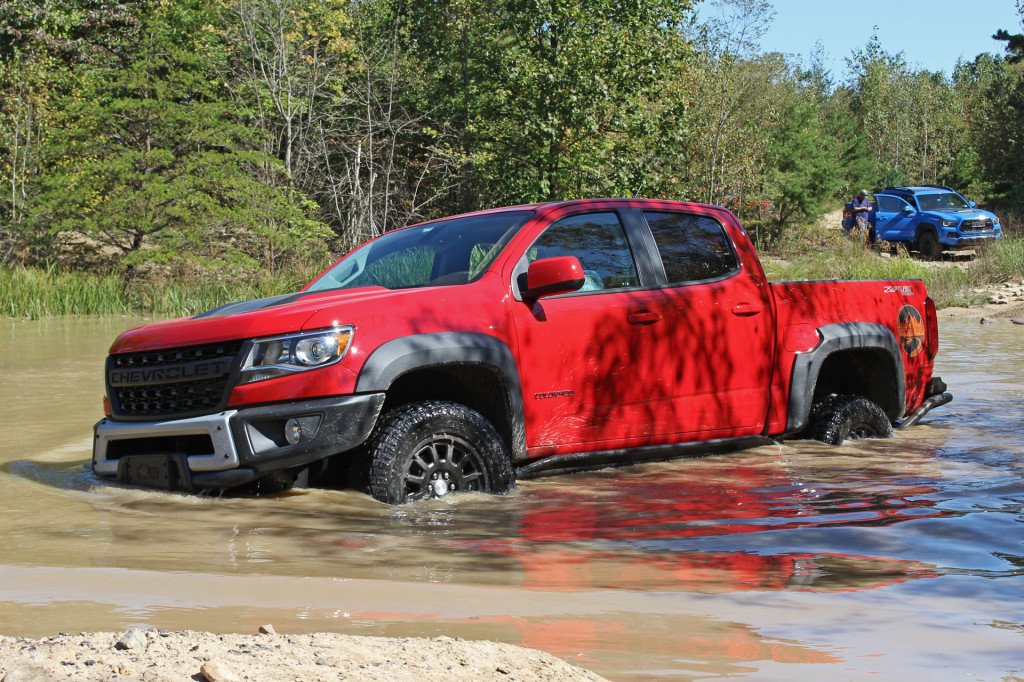 While there was a clear off-road winner, it was much tougher to pick second place, especially when there are two trucks that deserve the honor equally—though for almost diametrically opposed reasons.

The Colorado ZR2 Bison is an electronic and mechanical tour de force. Everything related to the off-road system is controlled by dials, buttons, and lights. It boasts electronic-locking front and rear differentials, Bison-specific hot-stamped skid plates, all-terrain tires, and a 3.42:1 axle ratio.

Toyota's Tacoma TRD Pro, on the other hand, feels incredibly analog, especially because the one Toyota supplied came with a 6-speed manual transmission. It was also the only truck with old-fashioned hydraulic-assist steering; the other trucks have electric assist. Like the Ranger, only its rear differential locks, but that was more than enough for our purposes.

It is also severely deficient in terms of interior adjustment. Tilt-and-telescoping steering? Nope. Height-adjustable seat base? Negative. This may seem trivial, but for those of us who are vertically challenged, it means you often have to cross your fingers and hope you picked the right line before that boulder dips out of your field of view.

While the Bison coddles with its set-and-forget electronic systems and cushy, spool-valve-dampened suspension, the TRD Pro hammers off hard obstacles and the steering wheel yanks aggressively at your wrists whenever the front axle gets jarred. Oddly, the truck Toyota sent was also equipped with rocker rail steps, which made the TRD Pro's 9.4 inches of ground clearance moot when there was any body at roll at all, which on these rutted trails, was pretty much always.

One of those steps became the only casualty of the day when it brushed a two-foot-diameter boulder that failed to yield to the big Voodoo Blue (a great color, by the way) hammer. Despite this, we were charmed. The TRD Pro feels honest and direct where the Bison feels plush and distant. The Bison's shift-by-wire systems also let us down with unreliable status information on more than one occasion.

We were occasionally caught out by the Tacoma's almost-too-wide turning circle, which was exacerbated by remaining in 4-wheel-drive. The Bison's was no smaller, but since the truck itself felt larger due to the airy cabin, working it around corners incrementally seemed only natural. Neither matches the Jeep for outright nimbleness, and both held up the line on more than one occasion thanks to their demands for more finesse in tight corners.

We love both the Colorado Bison ZR2 and the Tacoma TRD Pro, but they represent very different approaches to off-roading.

Ever reach a conclusion that seemed simultaneously obvious and a little too on-the-nose? Yeah. Here we are. The Jeep Gladiator Rubicon is made for this, quite literally. Electronic-locking front and rear differentials? Check. Electronic-disconnecting sway bars? Check. More ground clearance than you could possibly need? Check.

Everything about the Gladiator says it's build for off-roading. It offers the most ground clearance by far (11.1 inches) and everything you need for a day of trail crawling is right where you expect it, exactly when you need it, right down to the passenger grab handle dangling right above your shoulder, not mounted way forward on the A-pillar as it is in the other trucks.

The Gladiator combines the best qualities of the Tacoma TRD Pro and the Colorado ZR2 Bison. It offers all of the bells and whistles of the Bison, but feels compact and purpose-built like the TRD Pro. Even moreso than the Bison, the Gladiator Rubicon basically drives itself in tricky off-road situations.

It all comes together exactly as expected on the trail. The Gladiator feels narrow, and you can always tell where it will (and won't) fit. Thanks to the cramped cabin, you can see almost every bit of the truck from the driver's seat. The parts you can't see are covered by the Gladiator's camera system. There's no second-guessing; you simply pick the right line and the truck will follow through.

It's not as analog as the Toyota, but it offers nearly as much feedback with fewer compromises. It has all of the Tacoma's stiffness but only a fraction of its harshness; a day on rocky trails in the Gladiator won't necessitate a dental exam.

The Gladiator also allows a lot more fine-tuning of its off-road components and accompanying electronics, letting you dial everything in to your individual comfort zone.

The Gladiator Rubicon is the best tool for this particular job. Why improvise? 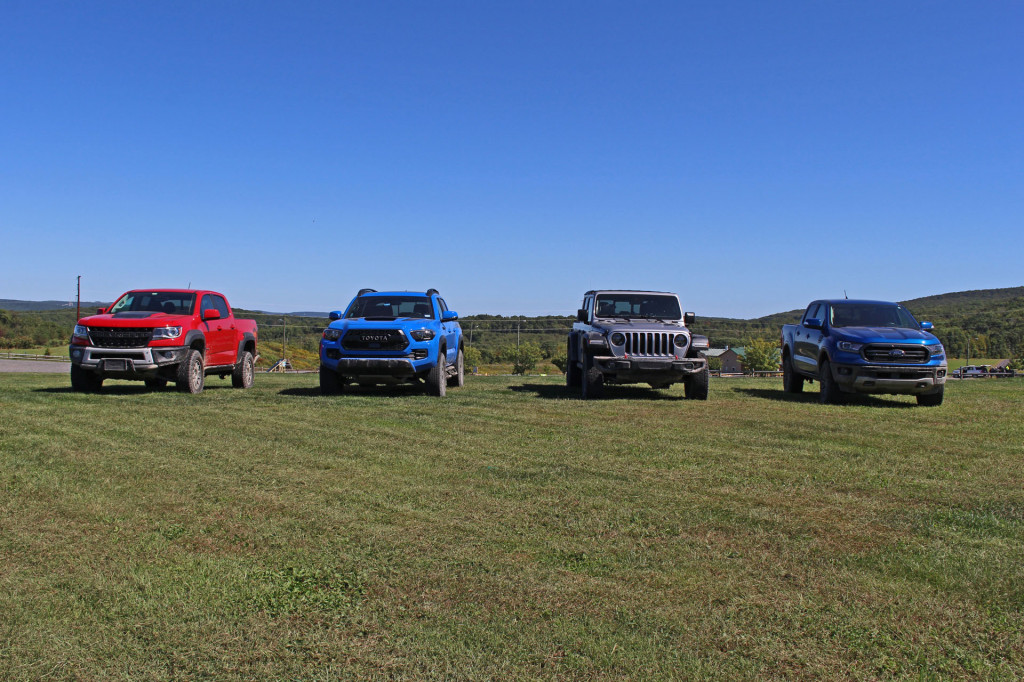 This test was limited to the off-road experience, and we will readily admit that it is not at all representative of the holistic experience of owning a mid-size pickup truck. If we had to drive these trucks every day, the Colorado would rocket to the top of our rankings thanks to its vastly superior comfort and interior space. We'd rank the Gladiator second, while acknowledging its cramped cabin and harsher ride. The Gladiator's pop-top setup is charming and fun, even when you're just mall-crawling.

The Ranger would rank third for its iffy rear seat room, bouncy ride, and somewhat odd transmission programming, which Ford will hopefully address as the truck matures. That leaves the Toyota. Everything we found charming on the trail would be annoying in everyday life, and while we'd be able to suck it up and deal, it simply wouldn't beat out the others. Toyota can contemplate that while reveling in its sales lead among mid-size trucks.

Motor Authority was among a select group of media invited to the Trail Trek Tour Midsize Truck Off-Road Challenge. Travel and lodging were provided by the event host, and the trucks were supplied by sponsoring manufacturers.