When it comes time for Lexus owners and lessees to shop for a new vehicle, they're most likely to step into another Lexus.

New data from the first year of J.D. Power's new Automotive Brand Loyalty Study shows Lexus customers are, in fact, the most brand loyal. Toyota's luxury division topped the rankings with a 47.6 loyalty percentage. The results and final percent figures are based on the percentage of vehicle owners who choose the same brand when trading in or purchasing their next vehicle. 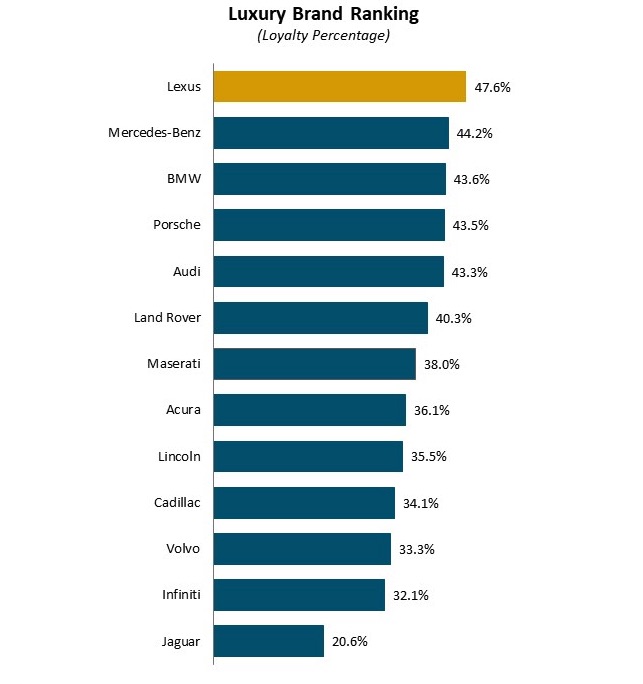 Lexus even managed to put some distance between itself and rivals. The runner-up, Mercedes-Benz, scored second place with 44.2 percent. The rest of the top five keep it far closer with BMW (43.6 percent), Porsche (43.5 percent), and Audi (43.3 percent) all within 1 percent of one another.

At the bottom of the list sits Jaguar (20.6 percent) along with Infiniti (32.1 percent) and Volvo (33.3 percent). Cadillac just broke out of the bottom three at 34.1 percent. The space between Jaguar and rivals is rather significant for the brand, which has struggled in recent years. Though, its cousin brand Land Rover is in sixth place behind Audi with a 40.3 loyalty percentage.

J.D. Power also scored mass-market brands in which Subaru was the winner. A whopping 61.5 loyalty percentage score gave the Japanese brand the top spot with Toyota at 59.5 percent, and Honda at 57.5 percent. The most loyal customers of a domestic brand come from, believe it or not, Ram. Fiat Chrysler's truck division placed in fourth with 56.2 percent. Ford followed Ram at 54 percent and Chevrolet sits in seventh at 49 percent. One interesting stat is the Hyundai-Kia dynamic. Kia scored sixth place with a 49.4 loyalty percentage, but cousin Hyundai is all the way down in ninth at 44.8 percent. 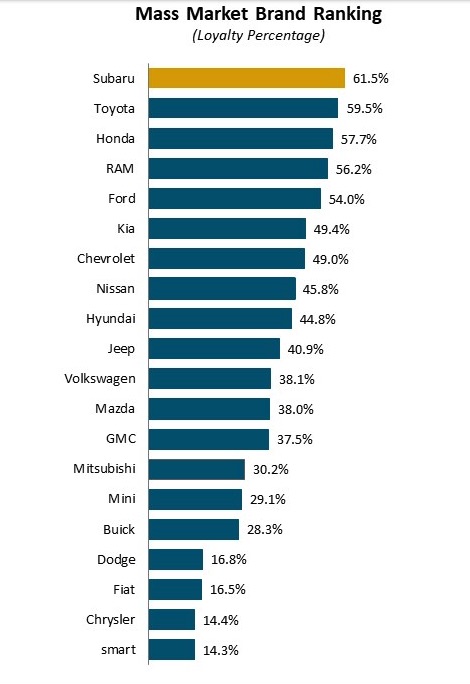 The mass-market list places the Smart brand at the bottom with just a 14.3 loyalty percentage. Not surprising knowing the brand will soon exit the U.S. market. After that, Chrysler will be at the bottom, as it sits not far at 14.4 percent today.