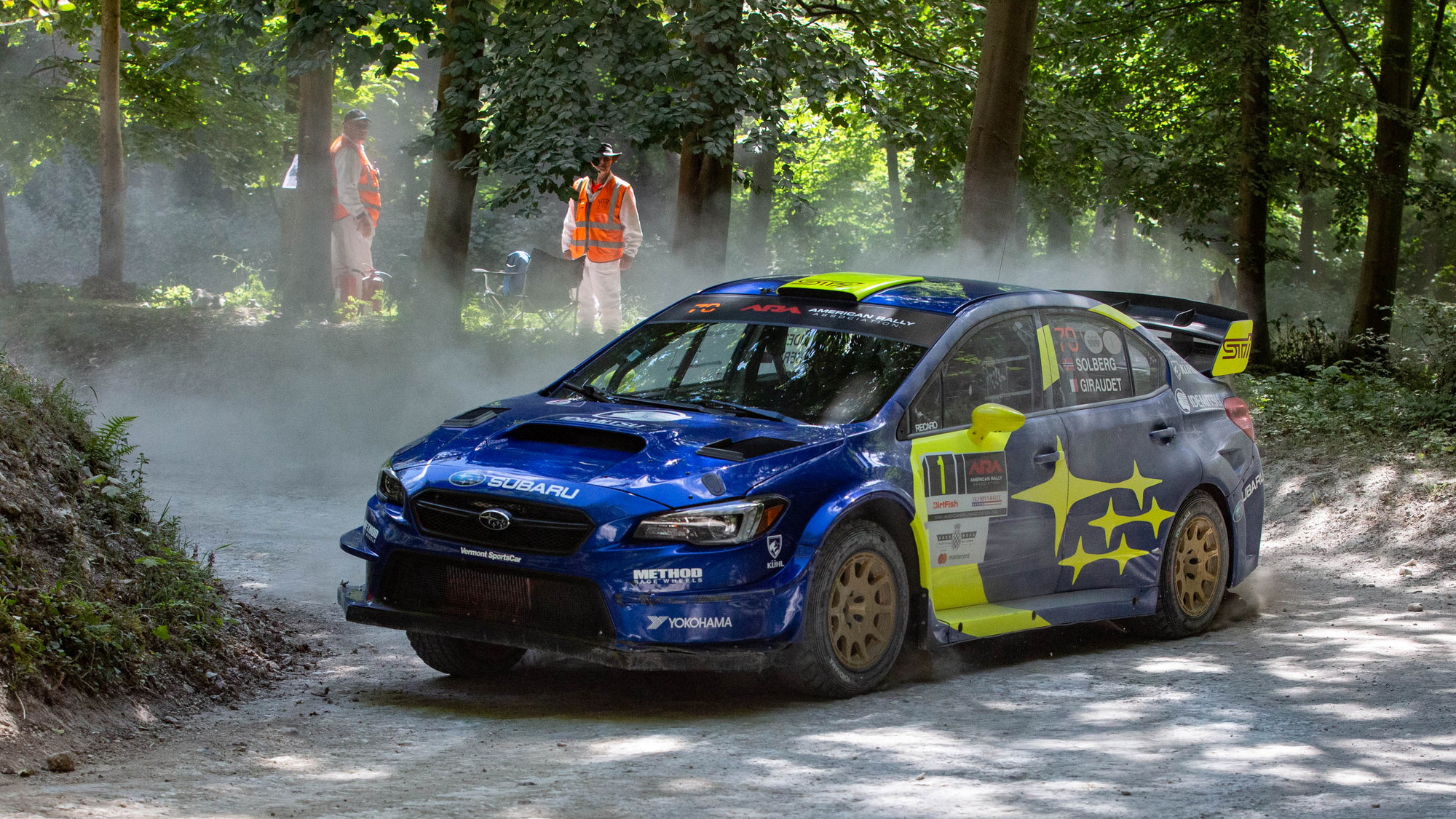 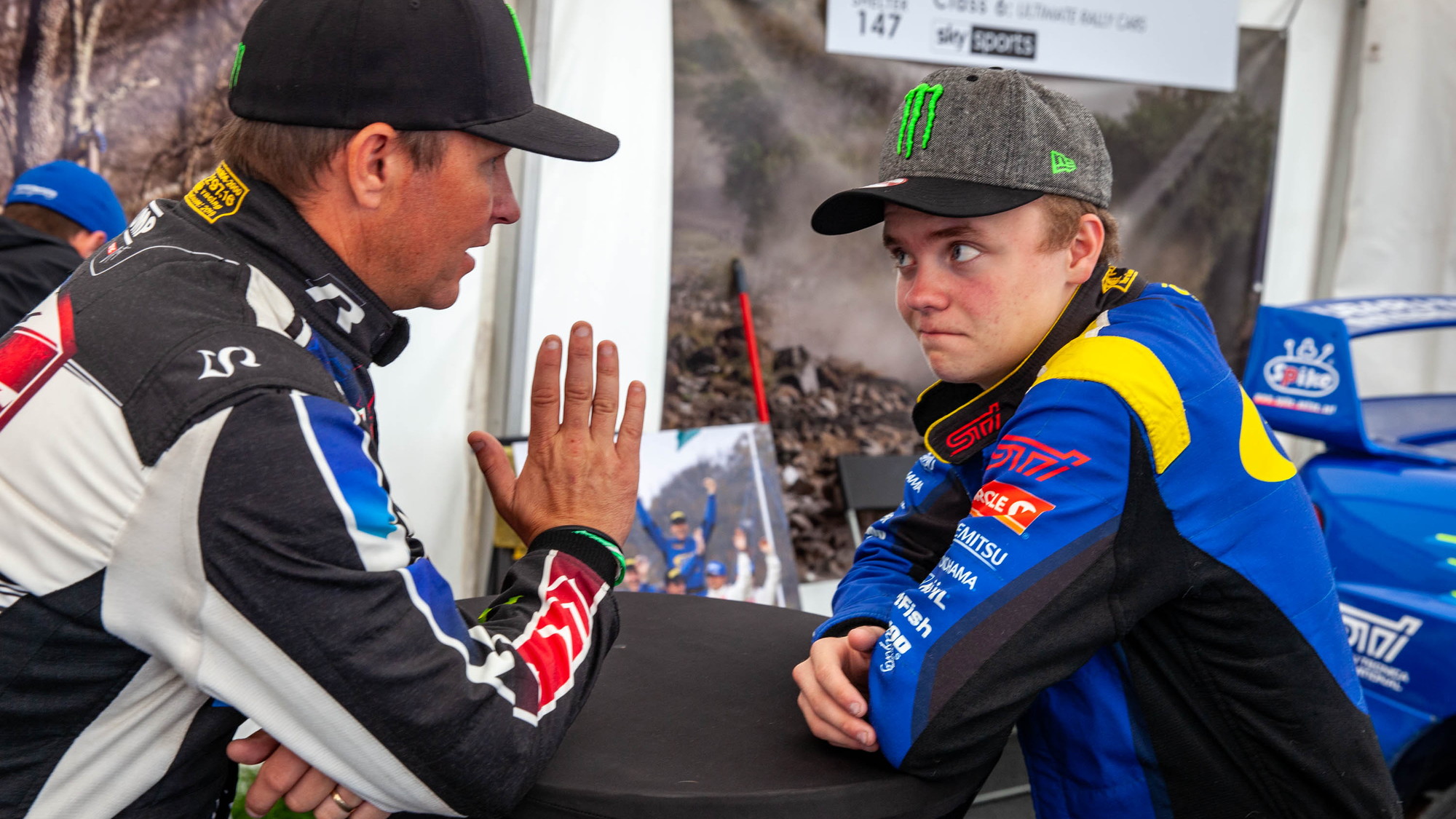 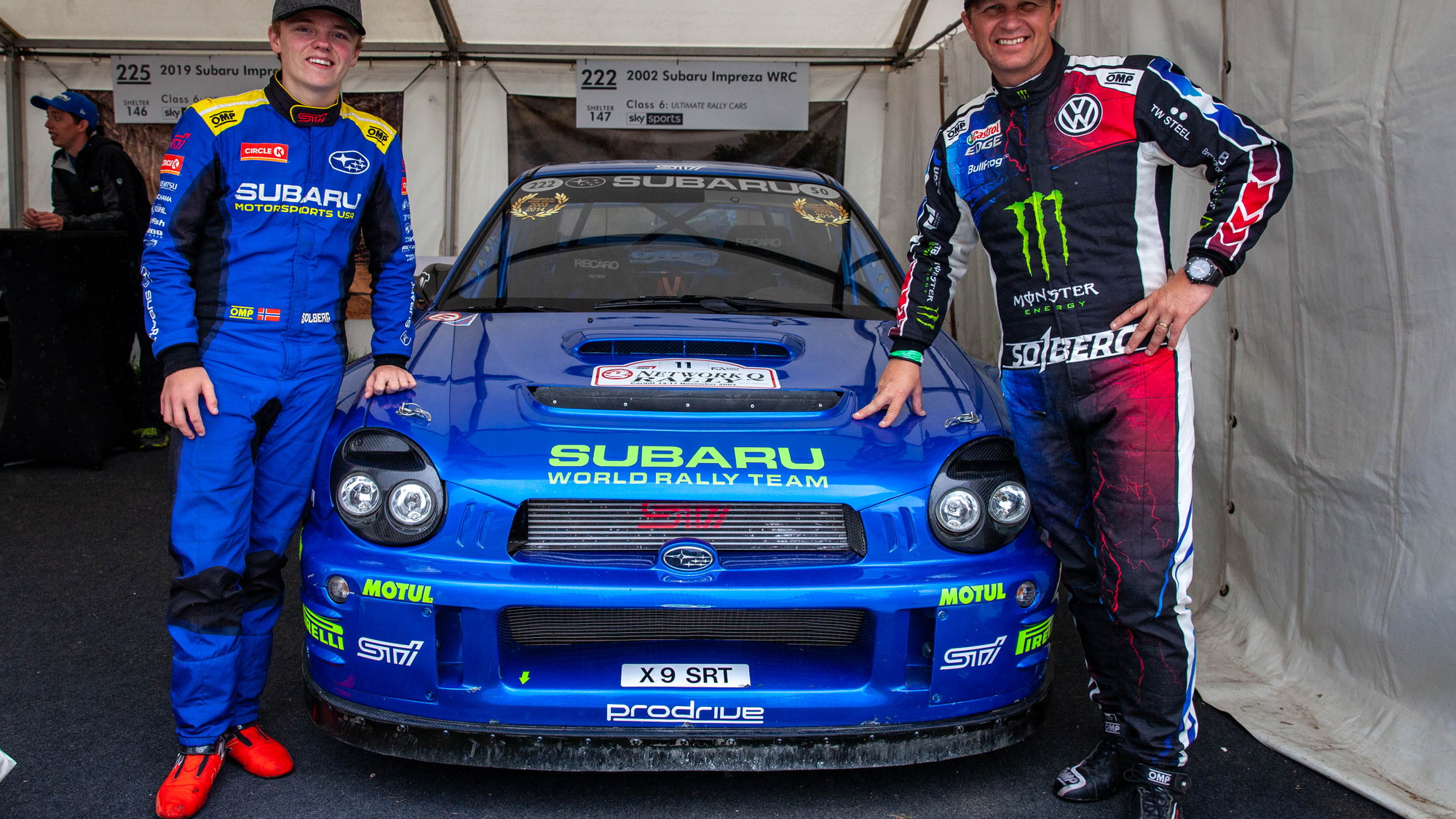 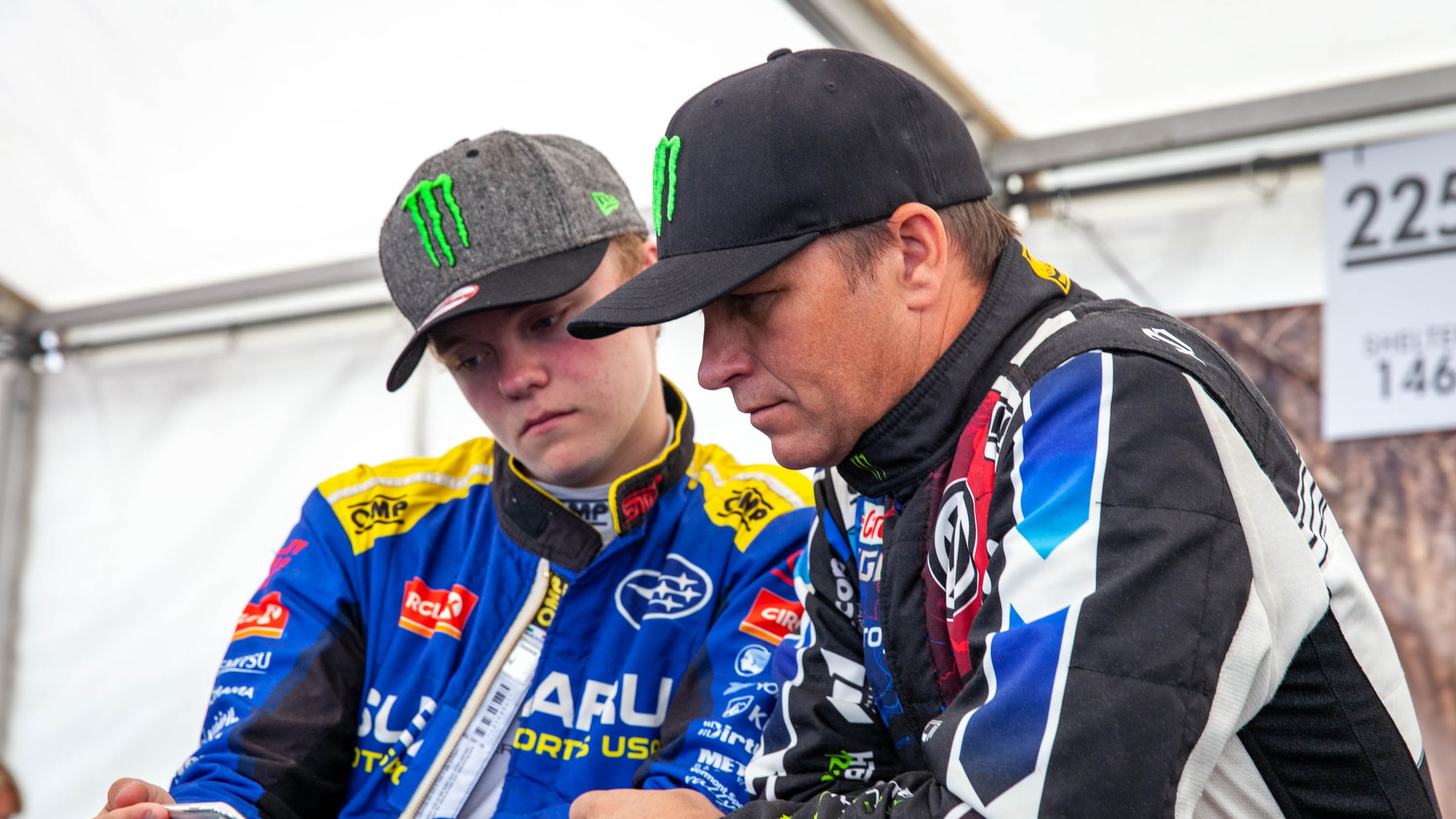 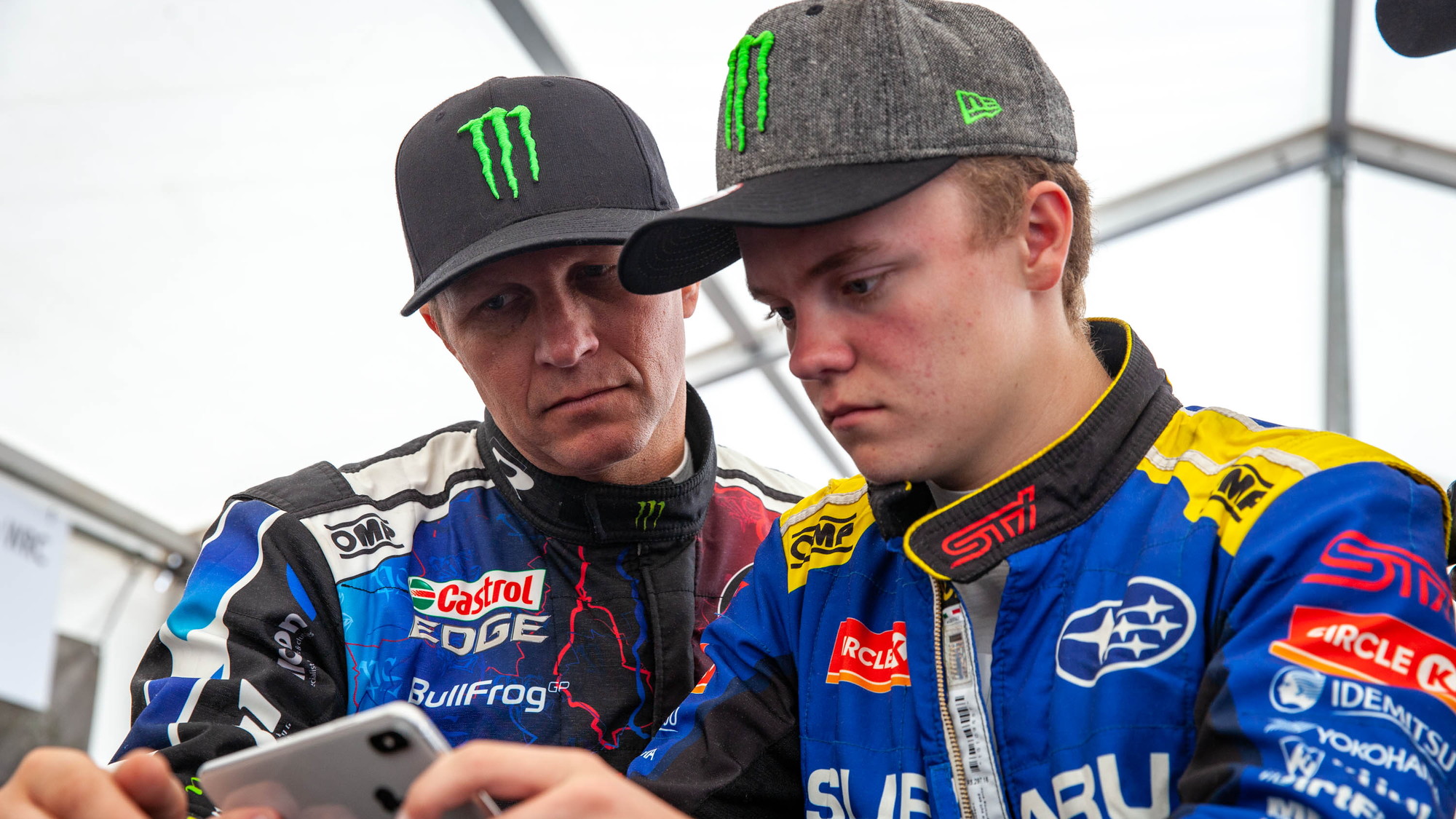 Petter Solberg wouldn’t sit in the grandstands to watch his son’s first race in 2010.

His son, Oliver, was just 8 years old, racing crosskarts in Sweden. That first time behind the wheel for Oliver was big for Petter; it was Oliver’s first foray into motorsports, following in his father’s footsteps, his mother cheering Oliver on—a Cat Stevens song in the making.

Petter couldn’t watch Oliver’s first race because he was racing himself, in Portugal.

“They stopped the whole press briefing—TV and everything—for (Sebastian) and me to watch the race live,” Petter recalls with a proud smile. “(Oliver) came in third.”

As Petter begins his final lap as a full-time driver, Oliver’s first lap is just beginning. Oliver, now 17, is racing in the U.S. for Subaru in Rally America and picking up wins across Europe in rallycross. His future in motorsports is bright—just like his dad’s was once—and Oliver sounds at ease with the breakneck pace of what’s coming.

He’s just as easy in the car—flicking around corners and sliding through the forest at triple-digit speeds. At the 2019 Goodwood Festival of Speed, Oliver steadily improved each time through the forest rally course until he was near the top. On the hill climb, he drove like a fresh-faced teenager up any driveway—except Oliver drifted his car at a blur with precision control. Father and son eventually shared a podium together, although the order may be contested in living rooms for decades.

He learned how to drive a manual transmission when he was 5 years old. He learned in an old Beetle his dad bought for him, even though Oliver could barely reach the pedals and see over the steering wheel.

The farmland between his home and his grandparents’ home became his own 22-kilometer long special rally stage. Oliver burned through the forest out and home again, sometimes driving his father’s rally cars—but never the special Volvo 240 rally car. Even 17-year-old race winners have parental limits, too.

Oliver lives and breathes racing. His friends from the school that he attends in France are racers. He goes to a school with a traditional curriculum—mathematics, history, English—but is tailored for young race car drivers. On his weekends, Oliver spends his off days racing cars too. He plays video games like “Call of Duty,” but mostly racing games like “DiRT Rally 2,” which he helped develop with programmers.

His favorite color is blue, not only because he can’t stand red, but also because his bedsheets were blue and yellow from his dad’s days as champion for Subaru. He dreams about an Aston Martin DB5 because it’s a driver’s car and understated. (Ferraris and Lambos aren’t his thing, he says.) Tacos are his favorite food, presumably because those are fast food, too. Dates? Not yet. No patience.

Petter cheers on his son in everything. Although he beat Oliver up the driveway at Goodwood that day, Petter says his son is just as fast as he is.

“He's very good. Going well on the testing. We are very equal in times. I think rallying takes a long time,” he said. Petter was 28 years old when he won the World Rally Championship in 2003, the fourth-youngest winner in history and not long away from Oliver now. Oliver may eclipse that someday with his dad watching nearby—but it always hasn’t been that way.

Oliver has driven race-ready rally cars for just two years. When he was 15, he tested for the first time, with his mom riding along as co-driver. His dad couldn’t watch.

“I can tell you it's getting better now, but the first times, since he was 15 in the rally car, I was shit scared to be honest with you,” Petter said.

His nerves have calmed, and Petter says that he even takes advice from his son now during rallycross events—even if he won’t ride in the car with him.

“It's both ways. It's all about having respect. It doesn't matter the age,” says Petter.

Petter had his eyes on more world championships but doesn’t regret much about his career, other than he didn’t learn English until nearly his 30s, which kept him from sponsorships and opportunities that may have helped him stay in a WRC car longer.

He’s not pushing Oliver to have the same career he did, but said he’d be happy if his son followed his footsteps.

“That's up to him. I want him to be happy and have joy when he's driving (and the) smile on his face is really good. I think many young guys for any sport…it's too serious too early. We forget to smile. Why are we doing this?” he says.

Oliver smiles often. He smiles in his car, and he smiles with his father, who he says is his best friend. The two have a rapport that best friends and racers have—they talk with their hands, study corners, and follow each other on the track.

Oliver’s mother and Petter’s wife, Pernilla, is a driver herself, Petter’s former spotter, and Oliver’s current spotter. She’s the team manager, and Petter says there are more in the family that will keep the family business going.

“We are the world's biggest motorsports family,” Petter says.

For now, Petter is at the top of that order, finishing his career with a handful of rallies and rallycross events this year before focusing on Oliver’s career to come.

But that doesn’t mean Oliver doesn’t replace his dad at home.

Oliver says he’s required to wash his father’s cars, and his approach is just as meticulous as his race preparation.

“I have to have it very clean and nice; I like the difference from dirty to clean, and it looks perfect,” he says. That means a pressure wash, soap, hand washing, rinsing, and drying, he added.

While he’s washing cars, Oliver plans on being faster than his father someday.

So will Petter be proud or jealous when his son is faster than he is?