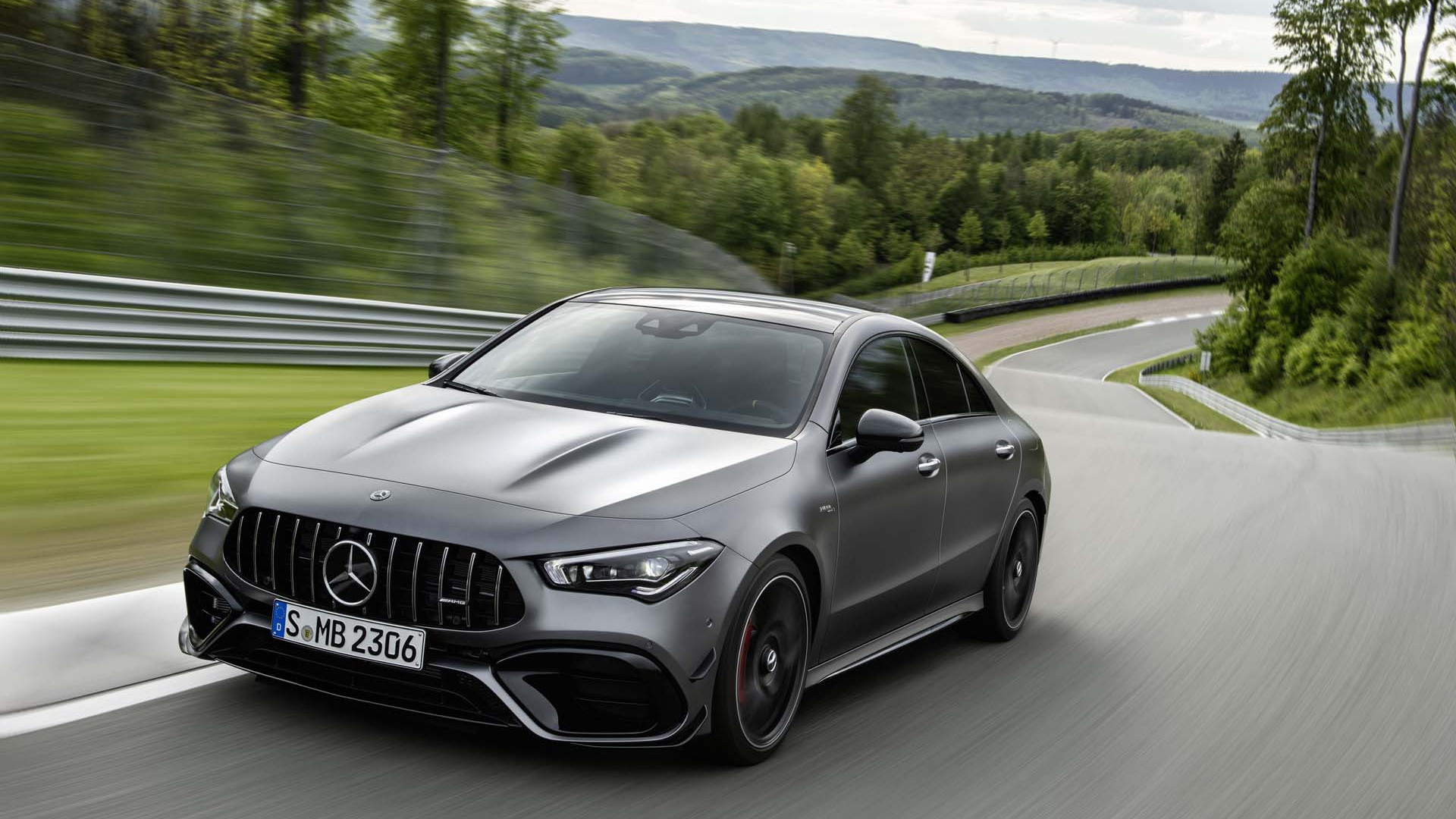 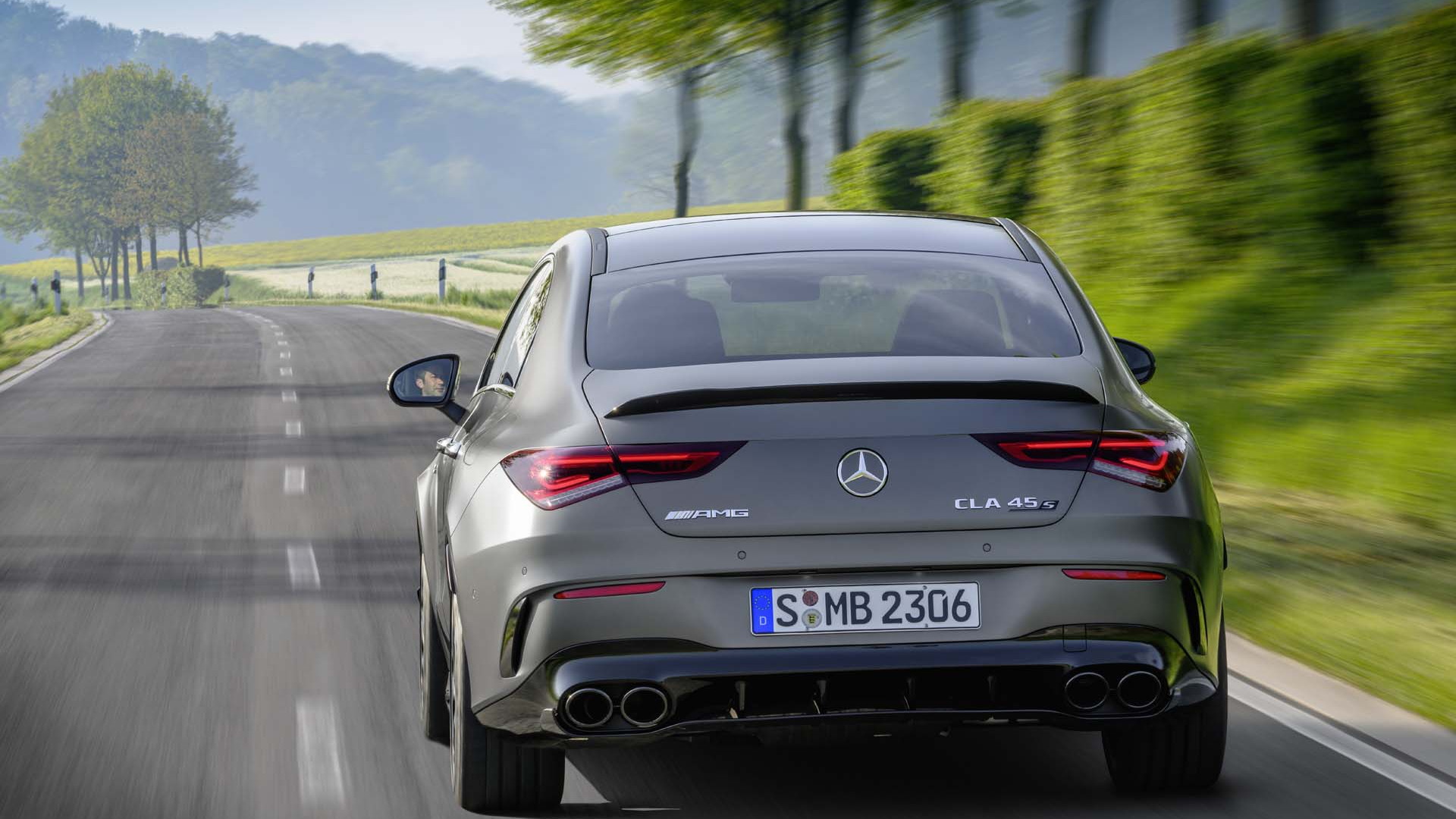 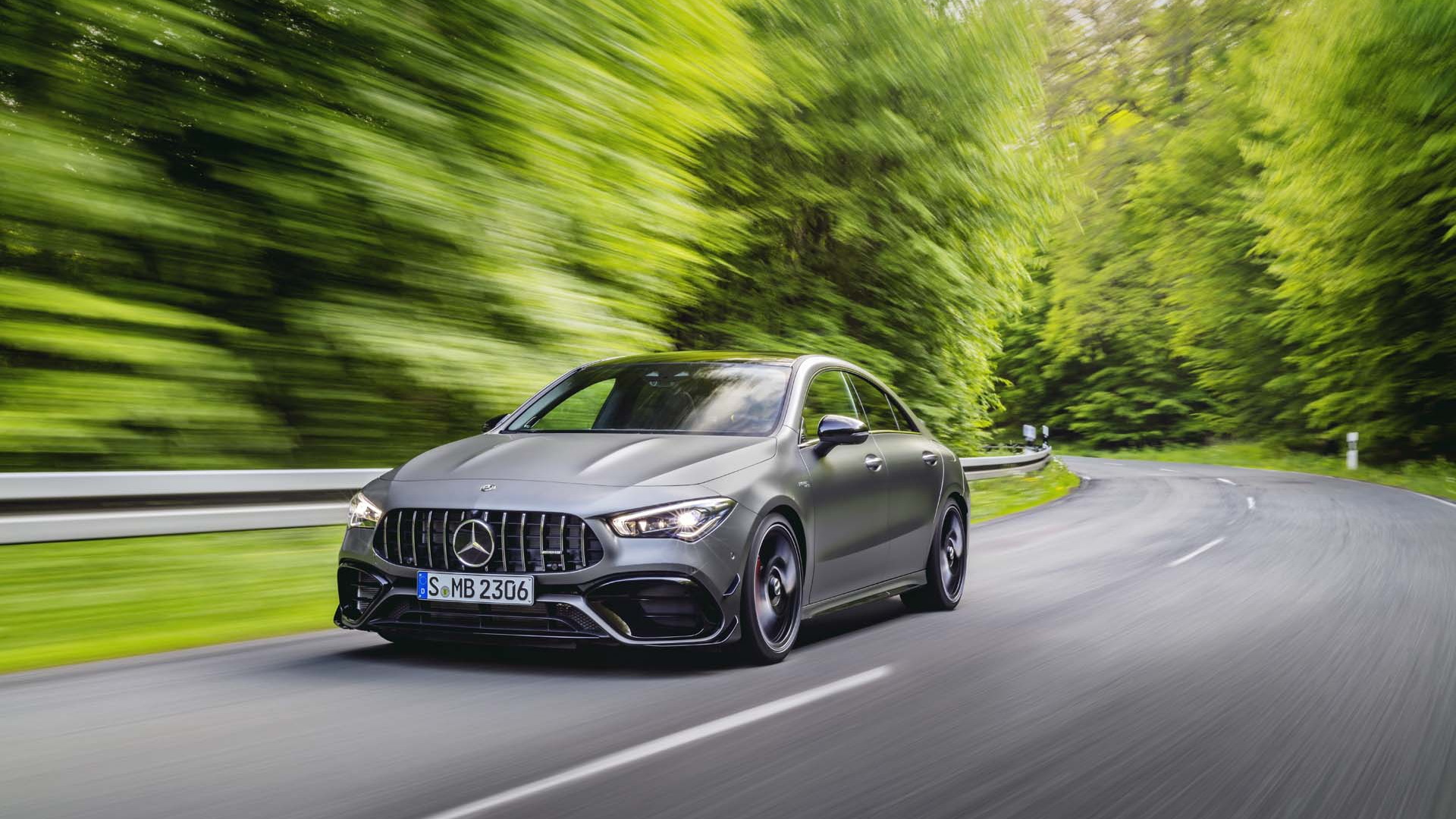 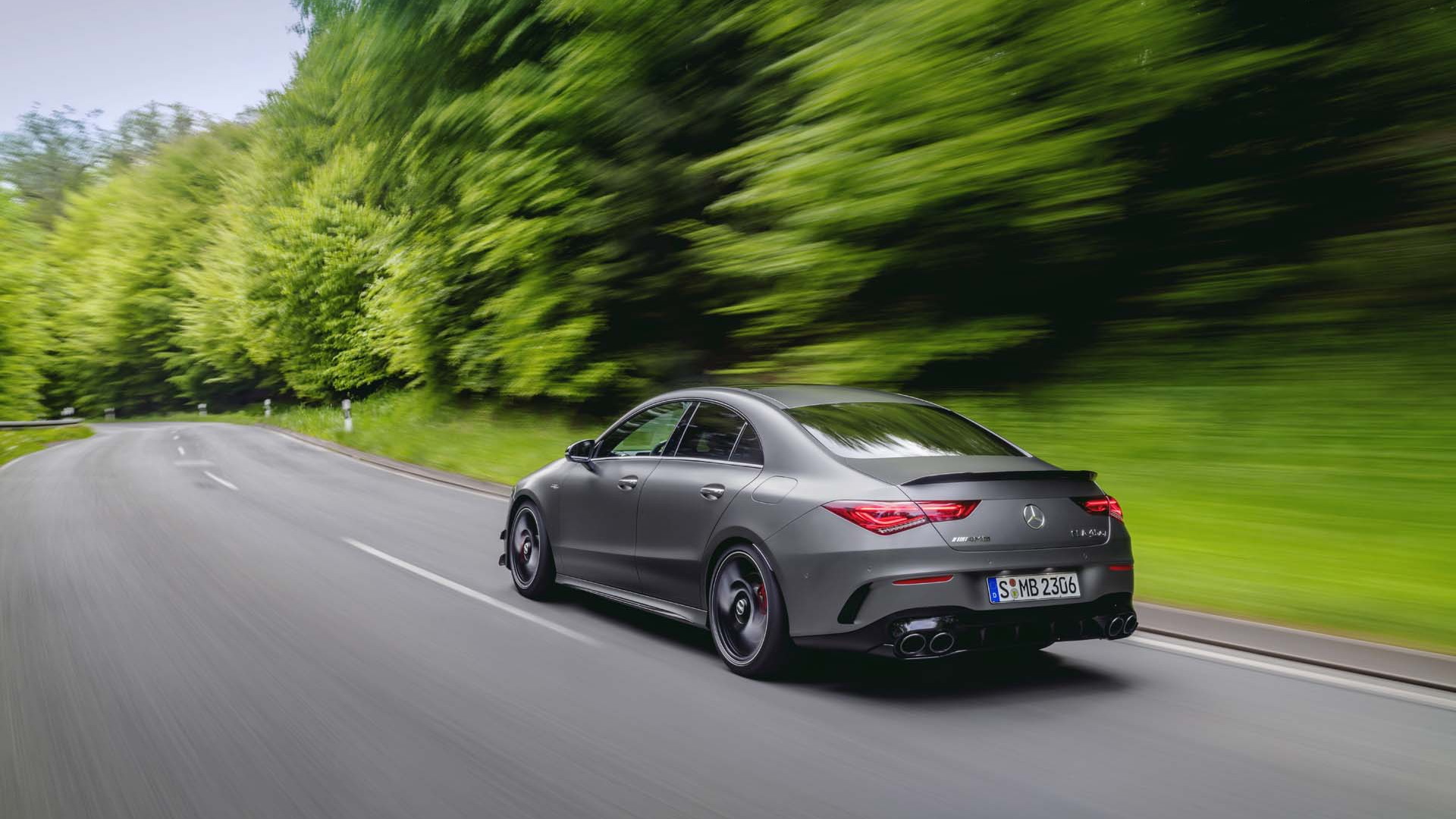 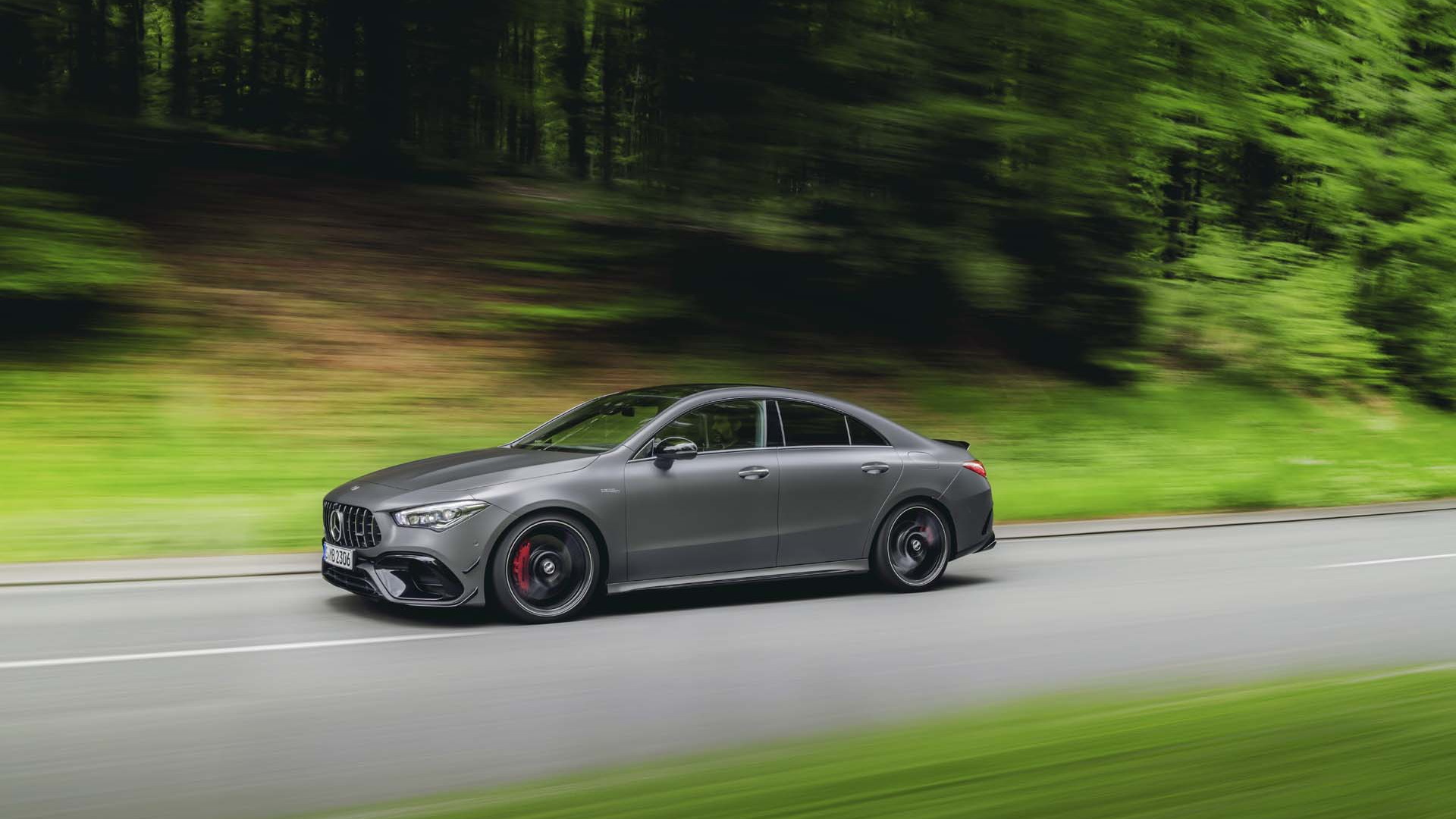 The last thing you should know about the 2020 Mercedes-AMG CLA45 is that it makes more power than its predecessor.

Yes, the new compact four-door coupe that debuted Thursday at the 2019 Goodwood Festival of Speed sports a similarly sized 2.0-liter turbo-4, but it has more to talk about than just numbers. Even if it makes 382 horsepower, up from 375 hp in the outgoing version, and that it's paired to an 8-speed automatic and all-wheel drive isn't enough. The new CLA45 is more. (Even if it's 0-60 mph time is less, at 4.0 seconds.)

Although the platform that it rides on is biased toward the front wheels, the CLA45 can send its torque toward the rear thanks to a complicated driveline that can also split torque between the rear wheels via separate clutches. That's more important than spec hunting. Even more than that? There's a drift mode, too.

That 2.0-liter turbo-4 isn't just an evolution of the last-generation CLA45's engine; it's fairly different this time around. The M139 engine from Affalterbach has been massaged by AMG professionals and is one of the most power-dense powerplants on the planet. Slicker cylinder walls, roller bearings in the turbocharger, and a new electronically controlled wastegate keep the busy engine spinning furiously up to 7,200 rpm. Mercedes says it's tuned the responsiveness from the turbos to mimic a naturally aspirated engine—the power builds progressively instead of peaking early and plateauing to a redline.

The sophisticated all-wheel-drive system and the suspension are stars of the show. The all-wheel-drive system electro-mechanically shuttles power between wheels, front to back, and side to side, for better grip and cornering. Between the rear wheels, power can shuttle from side to side via separate clutches in the rear axle differential. MacPherson struts up front use aluminum wishbones for lighter unsprung mass; a four-link rear suspension offers better torsional rigidity.

The CLA45 sits atop the CLA family for now. In other parts of the world, a CLA45 S will be equipped with even more power—up to 420 hp—although Mercedes is mum about that model's future in the U.S. for now. (Eds note: Please, MB. Please.)

What buyers in the U.S. will get in the CLA45 is a 3/5ths-size replica of the AMG GT 4-Door, complete with AMG grille, hood and signature paint and interior color schemes. Mercedes hasn't yet announced how much the CLA45 will cost when it goes on sale later this year, but it's likely to cost more than the current version, which starts at more than $54,000.

Whatever the price is, Mercedes says it will make standard 19-inch wheels, all-wheel drive, twin 10.3-inch displays for instruments and infotainment (the latter is a touchscreen), and sport buckets. Optional extras include a higher top speed—167 mph from 155 mph—bigger brakes, sport suspension, and exterior accents.

But how it handles that power is more interesting. At least to us.