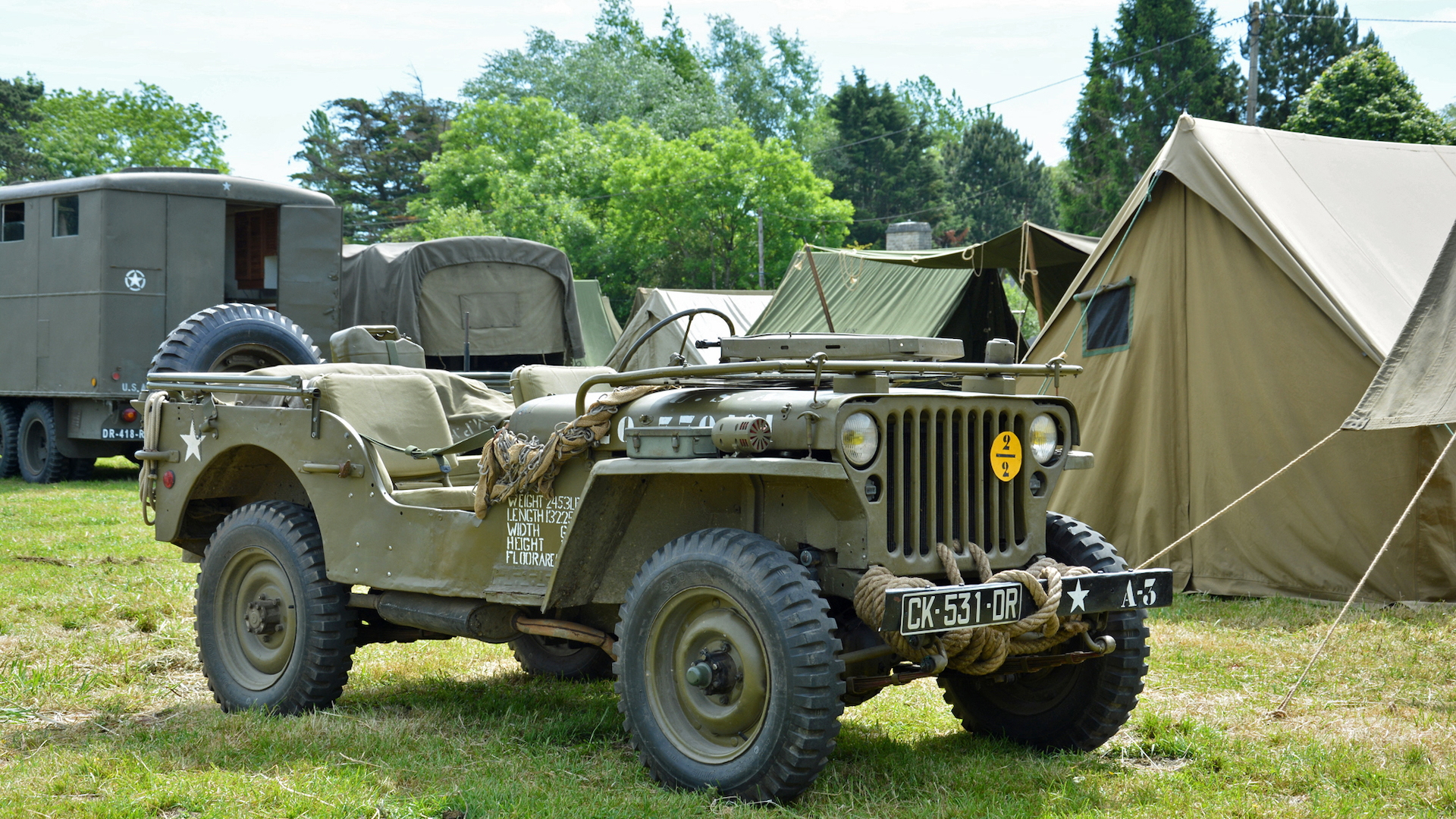 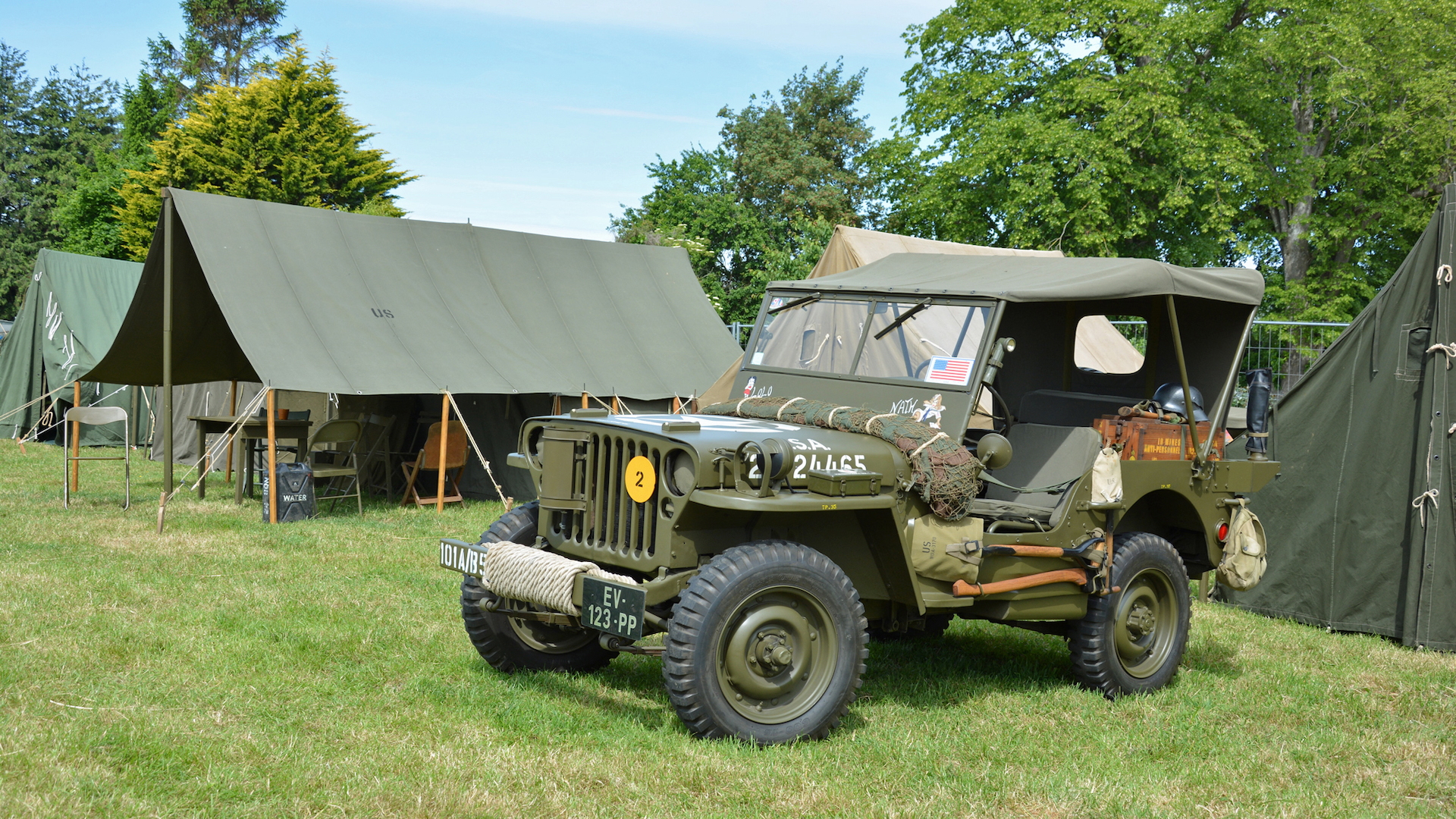 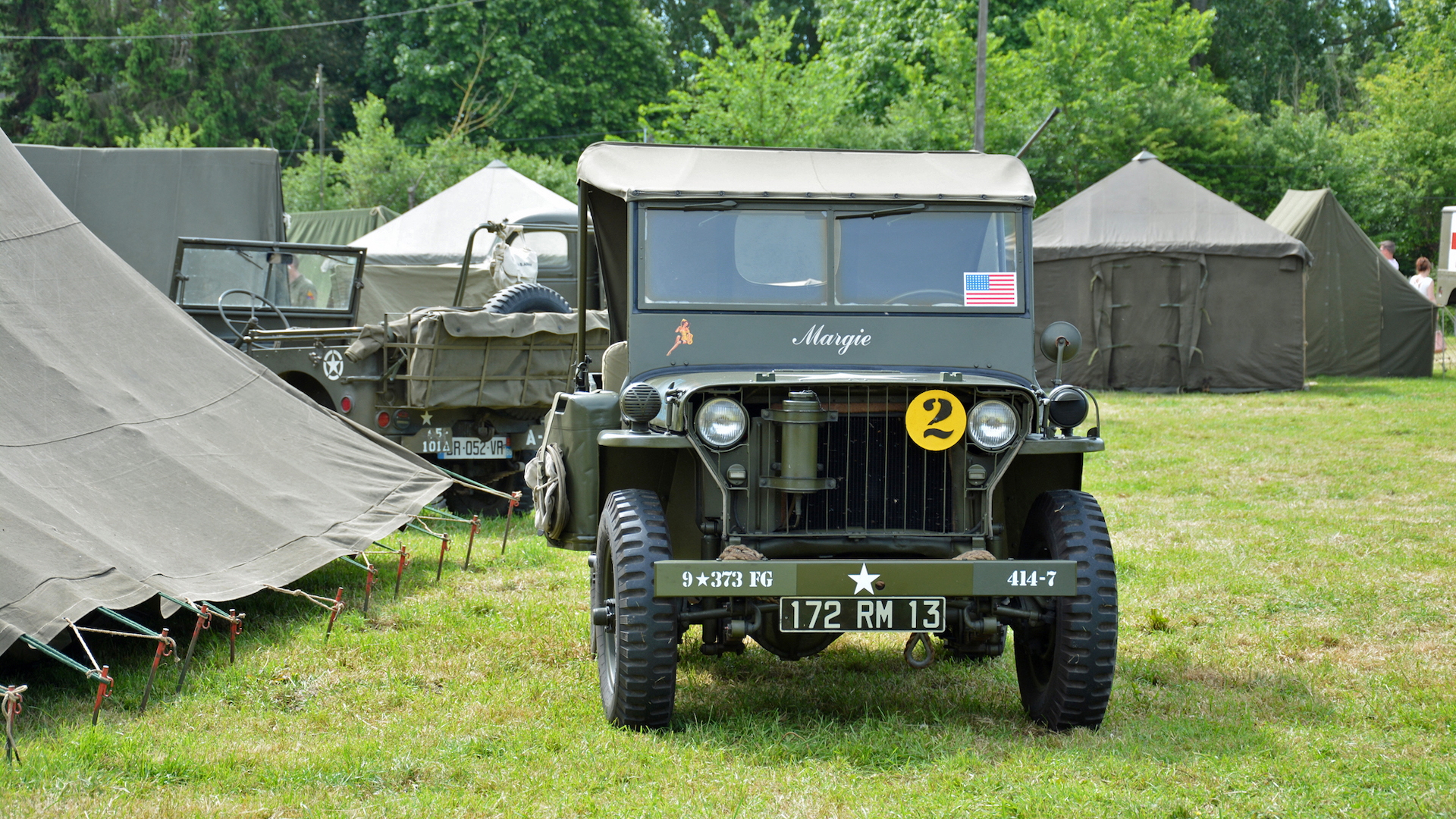 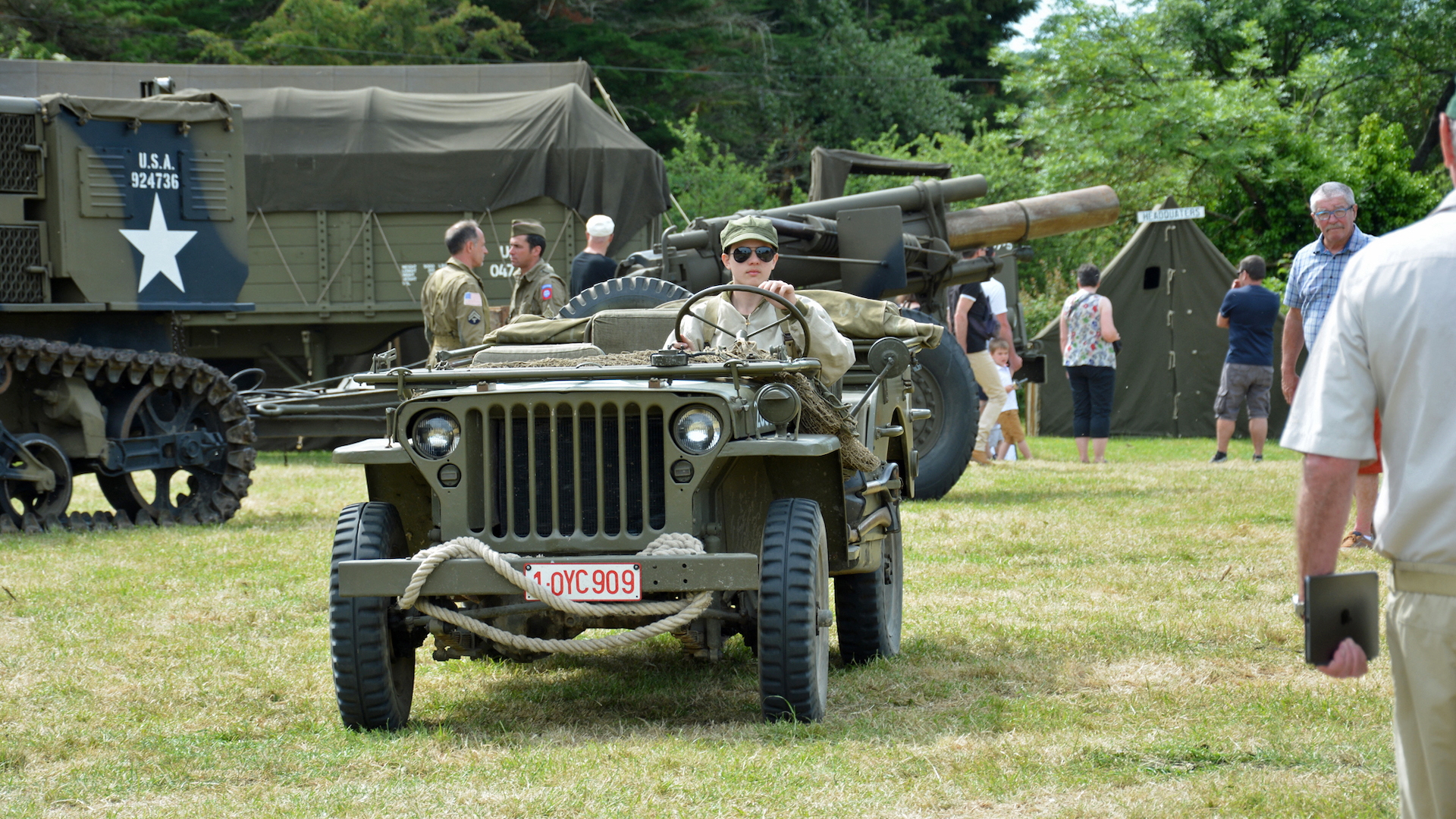 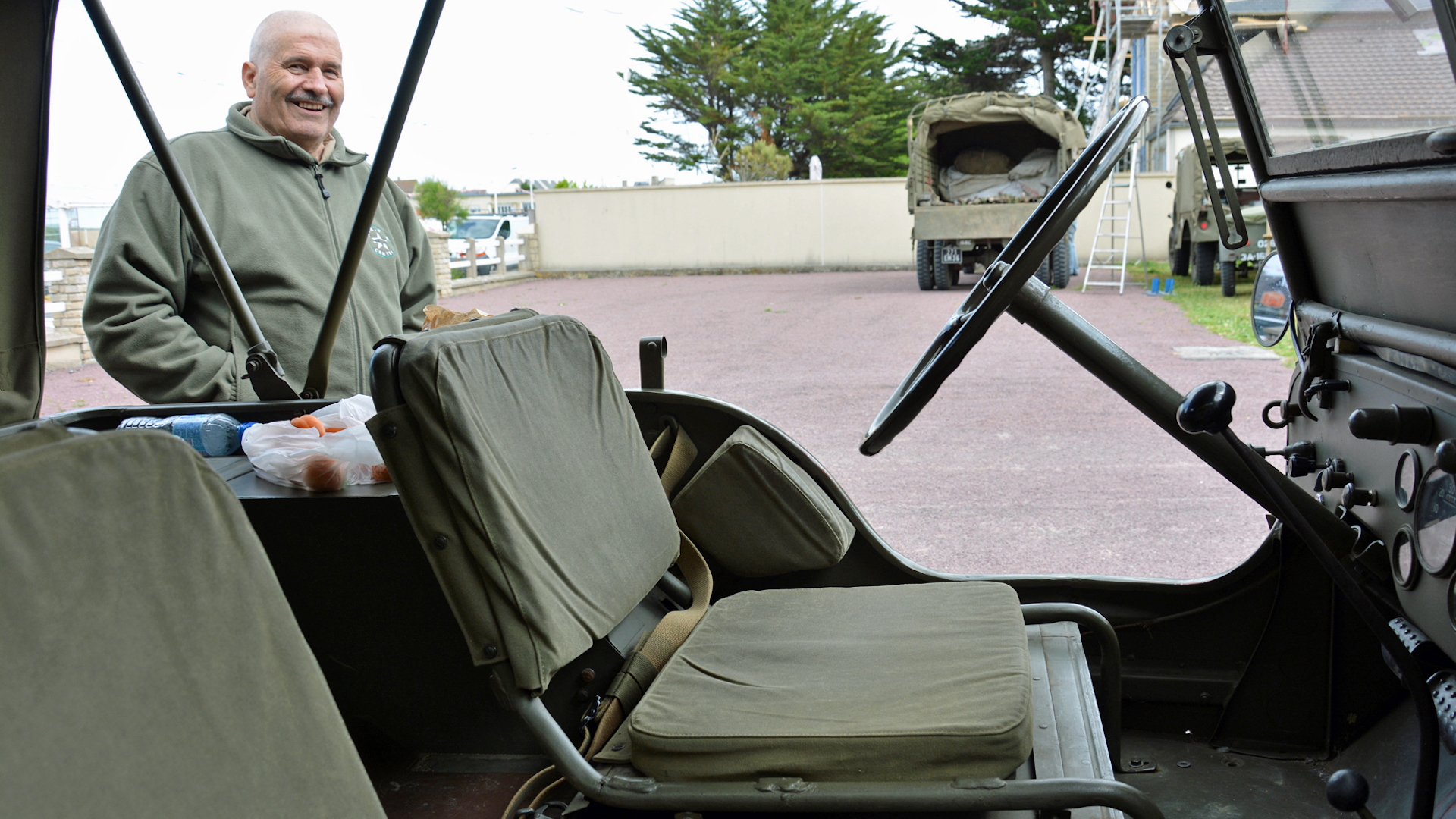 Bernard Grassin’s jeep sits a stone’s throw away from the English Channel as the chatter from nearby soldiers grows; first a whisper, then a murmur, then a frantic semi-din as they unload another, nearly identical-looking jeep from the back of a GMC truck, trying to locate precisely where to place the ramps before easing it down. An older man in full war regalia asks himself out loud if it will even start, once its four tires are on the ground.

Even if it doesn’t start, which it does as it belches a whirlwind of blue smoke that smells like oil and blankets the entire camp, there would be no need to panic. There is no immediate danger. The dozens of soldiers that chatter and mill about are only dressed the part. Die-hard military vehicle enthusiasts have traveled from all over Europe to bivouac in a public park in Normandy to celebrate the 75th anniversary of D-Day.

“My jeep was half-destroyed by a shell,” Grassin tells me over the bellow of a Dodge WC carefully backing up, his ear-to-ear smile pitched in battle with a brush-cut mustache. “The previous owner cut out the damaged rear end, welded a home-made metal platform onto the undamaged front part of the body, and used the jeep to take fodder out to the animals on his farm.”

“I had to find and fit a new-old-stock body to get it back on the road.” His eyes light up wide and round like the Jeep’s own headlights. “I spent four years restoring this car!”

The story of Grassin’s jeep isn’t as unusual as it sounds. Many of the thousands of jeeps parachuted onto the beaches of Normandy by the American, British, and Canadian armies during World War II followed a convoluted path to the world of classic cars as they helped rebuild France and it neighboring countries.

Willys designed the Jeep—which the modern-day, fourth-generation Wrangler traces its roots to—with a short shelf life. As far as the United States Army was concerned, the open-top 4x4’s only mission was to help its troops liberate Europe by fending off the belligerent German forces. It was as disposable as the leather combat boots given to young soldiers before they shipped out. When a jeep became unusable, whether because it was shot by a Panzer tank or embedded in a damp forest with a blown engine, it was left on location and forgotten as if it had never existed.

Most of the examples that survived the war relatively unscathed stayed in Europe, too, because the cost of shipping the materiel brought across the Atlantic back to the U.S. would have been blisteringly high. Besides, Americans had little need for war-blemished vehicles at home.

Europeans did, though. One by one, the jeeps marooned deep in the intestines of the Old Continent returned to life like victims of an inexplicable curse.

Ordinary motorists found the Jeep far too rudimentary to tolerably drive on a daily basis; it defied modern beliefs, even by post-World War II standards. It was inefficient in an era when the French government still meticulously rationed fuel, and wood gas was consequently hailed as a promising alternative to gasoline. It offered no protection from the cold, the wind, and the rain, and it was uncomfortable at best, even on the sporadic stretches of smooth asphalt. To the average driver, a used Jeep was worth almost nothing.

However, its long-lasting mechanical components and its fabled all-terrain capacity made it the ideal do-it-all farm vehicle. There weren’t many tractors in France before the war. Horses and oxen normally pulled farm equipment, and the few used by bigger, wealthier farms were seized, destroyed, or both by German forces. Farm animals were often eaten as food became alarmingly scarce during the conflict, so they couldn’t be counted on to work the fields at the end of the war. Necessity alchemized the jeep into the driving force that rebuilt France’s agriculture, restored its infrastructure, and helped its citizens gradually return to their normal, though forever altered, civilian lives.

Some jeeps were taken right from the field, forest, or street where they were abandoned; unwanted examples were more common than grape vines in the French countryside after the war. The jeep had no ignition key, so anyone could hop in, turn the ignition lever located on the left side of the dashboard, and—with a little bit of luck—limp it home. At least a few business-savvy individuals anticipated a growing demand for Jeep-like vehicles and built up significant stocks by cleaning up after the Americans. These vehicles were fixed with a varying degree of ingenuity and later sold for a handsome profit.

Local authorities sometimes put jeeps and other leftover military vehicles in the hands of the citizens they knew would play a key role in rebuilding a community and its economy. I spoke to a collector whose father, a miller in a village near Paris, received a Jeep and a Bedford truck from the town hall in late 1945 so he could resume his work as quickly as possible.

After transporting troops and their equipment, jeeps tirelessly worked the land they helped liberate. They plowed, they spread pesticide, they harvested grain, and they moved bales of hay. They were cut up, welded, cut up again, painted, fitted with home-made power take-off units, dented, scratched, and fitted with Peugeot-sourced diesel engines from newer Hotchkiss-built models when the original 2.2-liter 4-cylinder was too tired to burn another drop of leaded gasoline. The jeep morphed into a disposable piece of equipment for the second time in its life. It was a tractor, literally and legally. Some French farmers registered Jeeps as tractors rather than as cars. Attempting to categorize the jeep was brave but senseless, however. It fell into an unclassified species of vehicle capable of doing nearly anything that was asked of it.

Farmers weren’t the only ones who needed a Jeep-like machine after the war. Four-wheel-drive vehicles were a rare sight on French roads in the 1940s and 1950s, so many jeeps were painted red, fitted with blue sirens, and used as fire-fighting vehicles in France’s mountainous regions. Others cleared roads in the Alps or the Pyrenees after receiving a plow, and later spent the remainder of their days towing boats into and out of the water in a coastal city. Mechanics turned them into tow trucks, and France’s gendarmerie happily added ex-Army jeeps to its fleet of police vehicles. They were common through the 1960s on worksites, where they often reunited with bigger military vehicles made by Dodge and GMC. Phone company France Telecom often used American trucks to put up the utility poles that brought the telephone to thousands of households for the first time.

Returning to the battlefield

Rural life suited the jeep well. Meanwhile, some of the examples that stormed Normandy’s beaches led a more eventful life after reenlisting in the armed forces.

Immediately after World War II, before the 1948 Marshall Plan was approved to financially prop up European economies and prevent heads of states from defecting behind the Iron Curtain, the White House gave France about 22,000 Jeeps to help it rebuild its army as quickly as possible in case it needed to report for duty sooner than expected. The salvageable ones were sent to Algeria during the 1950s, where a bloody war for independence was brewing, while the ones considered too far gone to fix were used as parts cars. Willys-built jeeps served alongside examples manufactured under license in France by Hotchkiss and parts were often interchanged, so no two examples were exactly identical.

Some fought again, but others patiently sat waiting for their next assignment. NATO saved, stored, and maintained about 250 jeeps in an underground bunker located in a remote region of Norway as part of a sizeable stockpile of vehicles, weapons, and equipment saved for emergencies.

While a small handful of collectors turned their attention to ex-Army jeeps during the 1950s, it generally looked like the model’s fate was to be mercilessly driven into the ground by soldiers, farmers, or both. Its future began looking brighter when enthusiasts started restoring the better examples during the 1970s. As values rose, even damaged ones received a new lease on life.

Collectors dragged them out of barns, towed them out of fields, and purchased them from junkyards to restore them to their former glory, which sometimes meant buying parts cars and making one out of two, three, or more. The less courageous ones settled for buying cars discharged from the Army; this was an easy, worry-free way into classic jeep ownership because the government sold perfectly maintained, turn-key examples that required no wrenching or welding. The French army began the lengthy process of replacing its fleet of jeeps when Peugeot released the Mercedes-Benz G-Class-based P4 in 1981.

In 2019, a vast majority of World War II-era Jeeps left in France are in the careful hands of collectors. Most have lived many lives beyond their intended use, but their days as dauntingly experimental tractors are over for good. From the battlefield to the farm, they’ve been torn down and rebuilt so many times, and by so many different people, that an original example is almost impossible to find.

Grassin lucked out. He patiently sanded through the layers of paint—each one telling a different story—applied to his Jeep’s hood to find its original serial number: 20517882. He’s still trying to track down precisely where it landed. Enthusiasts who weren’t as fortunate as Grassin made up a registration number as the finishing touch after a lengthy restoration. It always starts with 20, which indicated a reconnaissance car in army-speak, but several owners told me the six remaining digits correspond to their birthday, to the day they purchased the car, or to the day of the Normandy landings. Documented originality is highly valued but never expected in the kingdom of classic jeeps.

Jeeps played a tremendous part in the defeat of Nazi Germany and its allies. That much is made vivid again as the swarm of latter-day soldiers man their Jeeps in this field in Normandy, 75 peaceful years since they retook it. What’s also made vividly clear is that the Jeep’s second act, after war became peace, was as critical as its first. Stories about the meritorious jeep bravely zig-zagging through wheat fields while dodging bullets are considerably more gratifying than tales of a franken-Jeep plowing a field. Without the grit and the inventiveness of the men and women who put the model to work day and night after the war, France would have carried the millstone of war around its neck for several more decades.

Grassin gets up and walks toward his car and draws me close, then points out the original serial number stamped into the frame.

“The jeeps did everything,” he smiles.