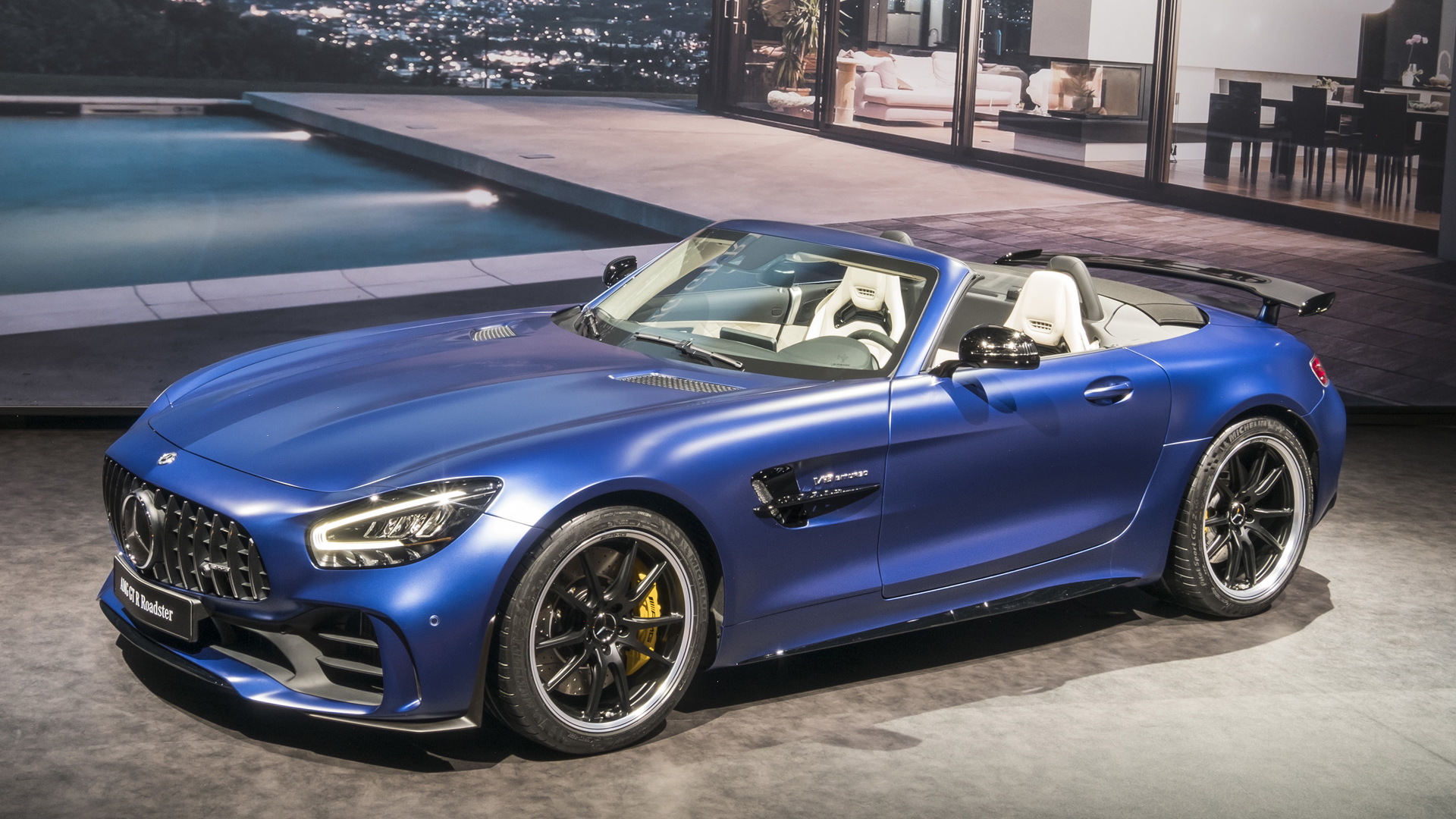 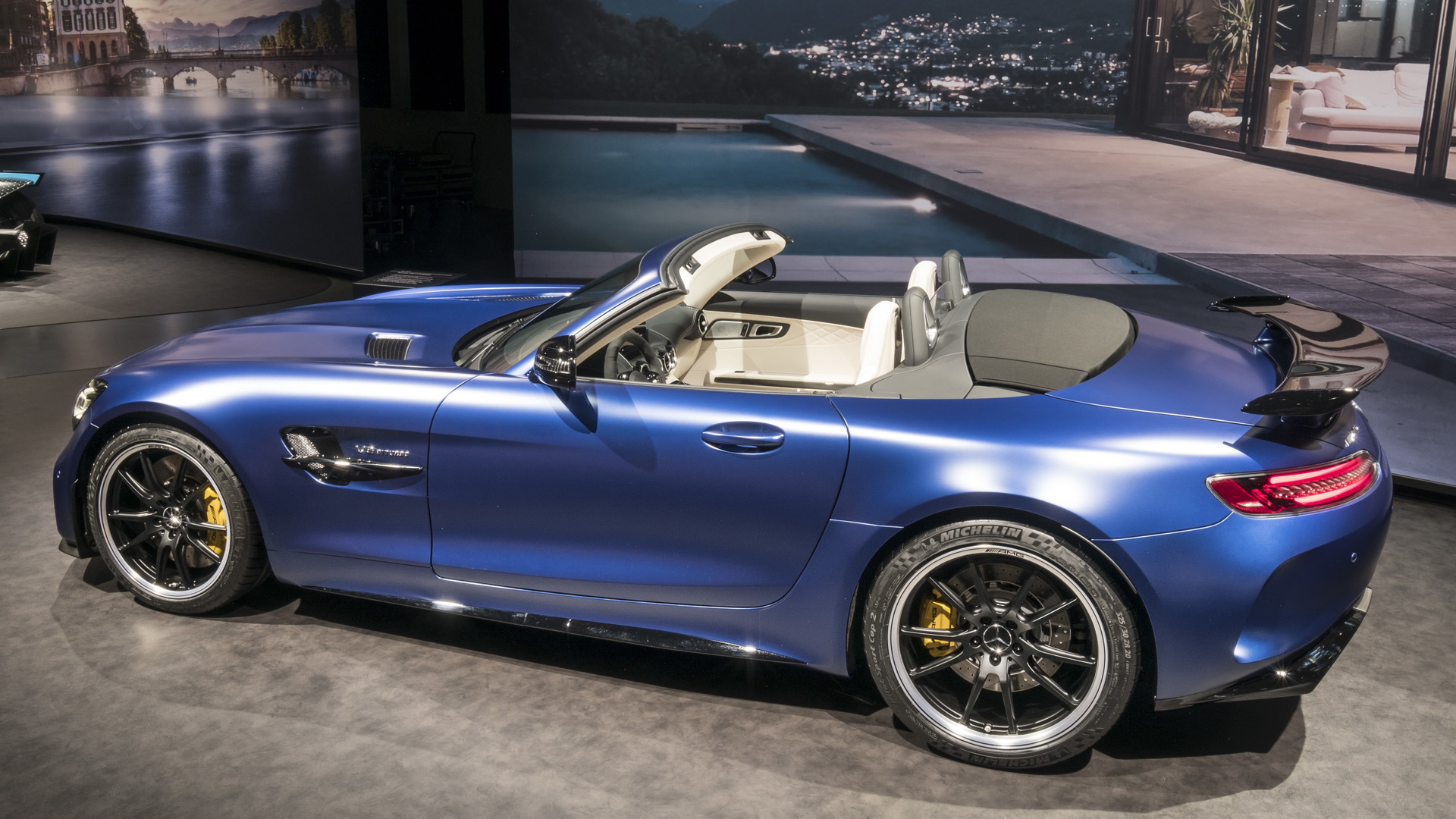 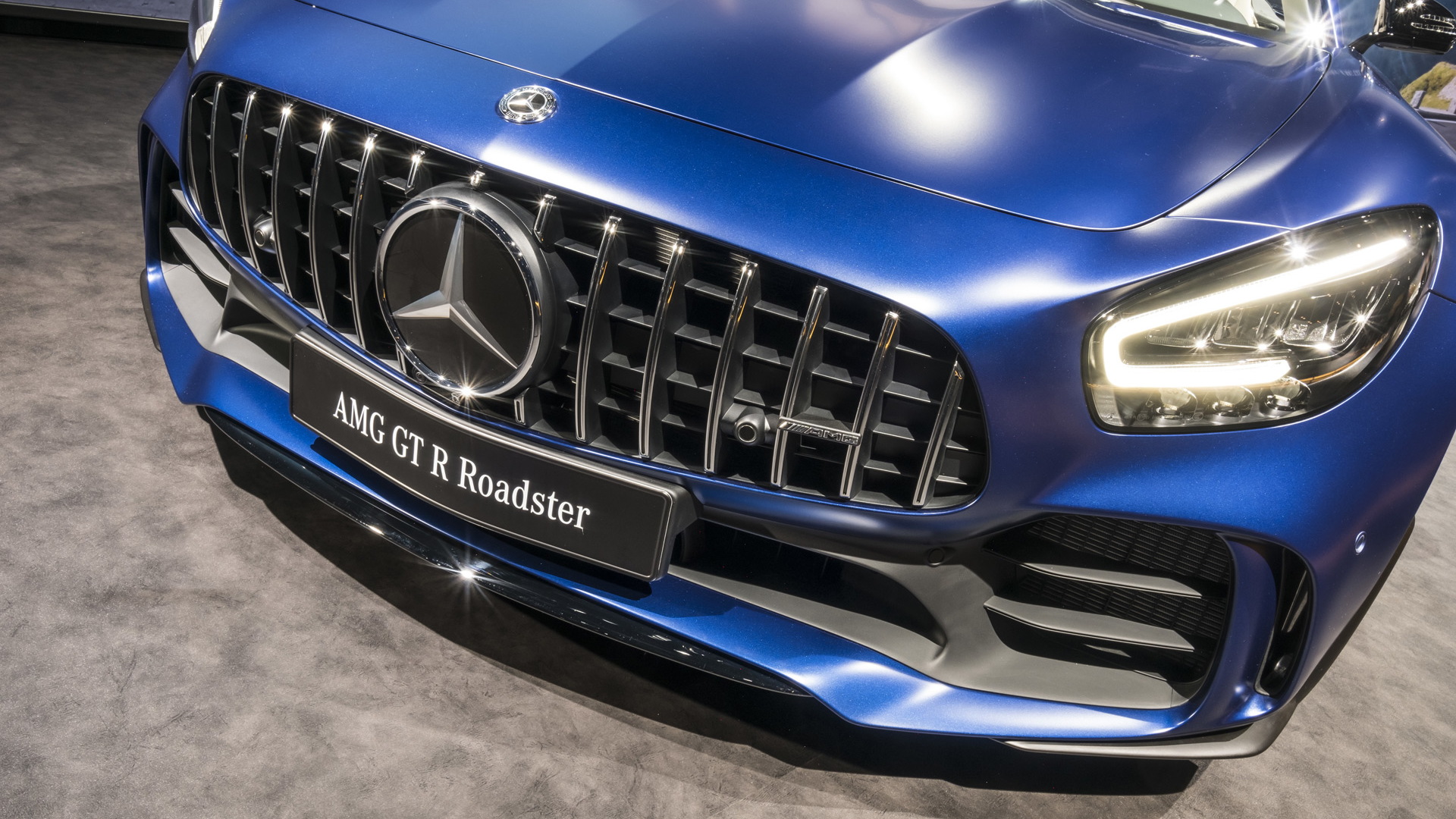 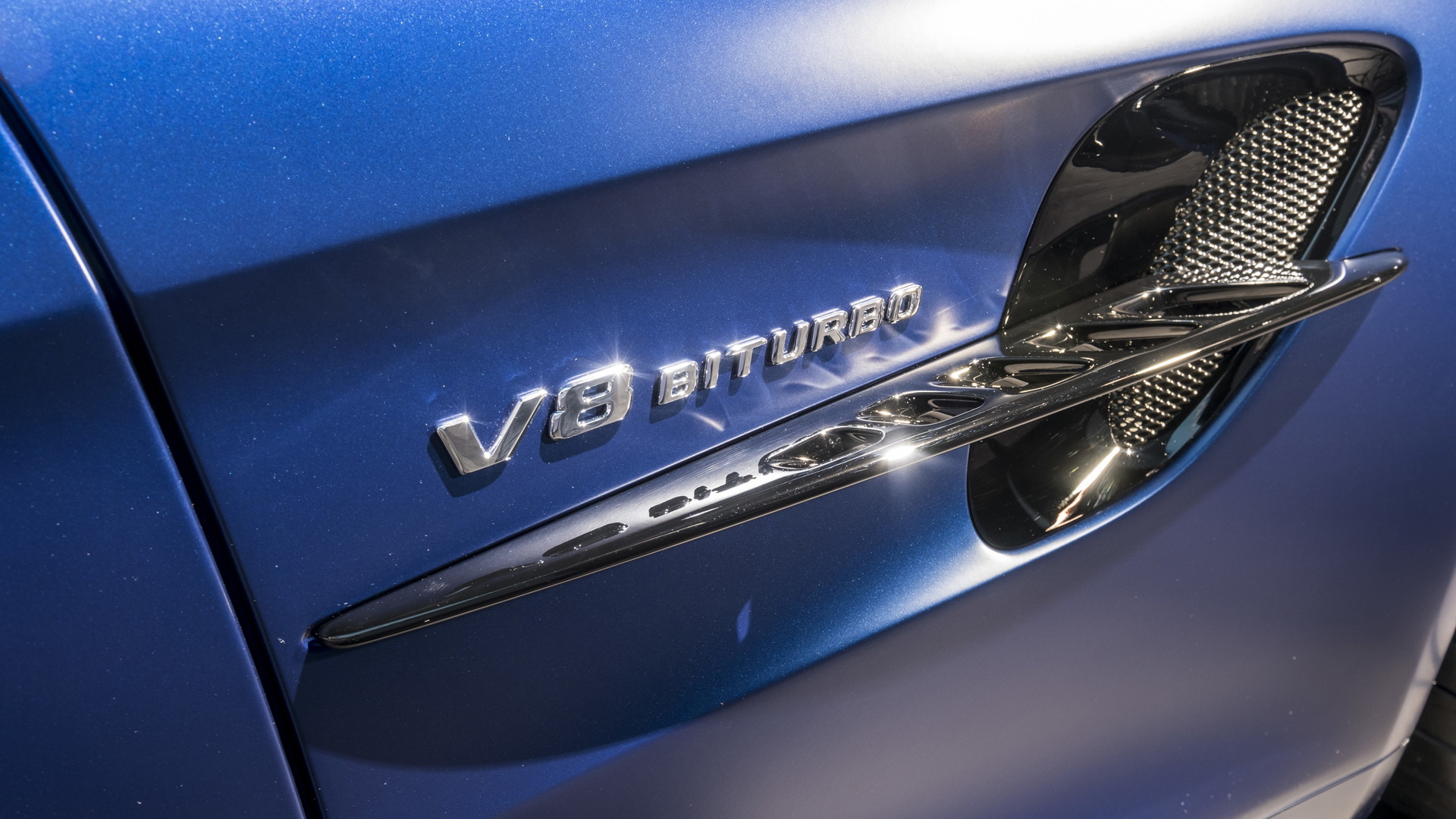 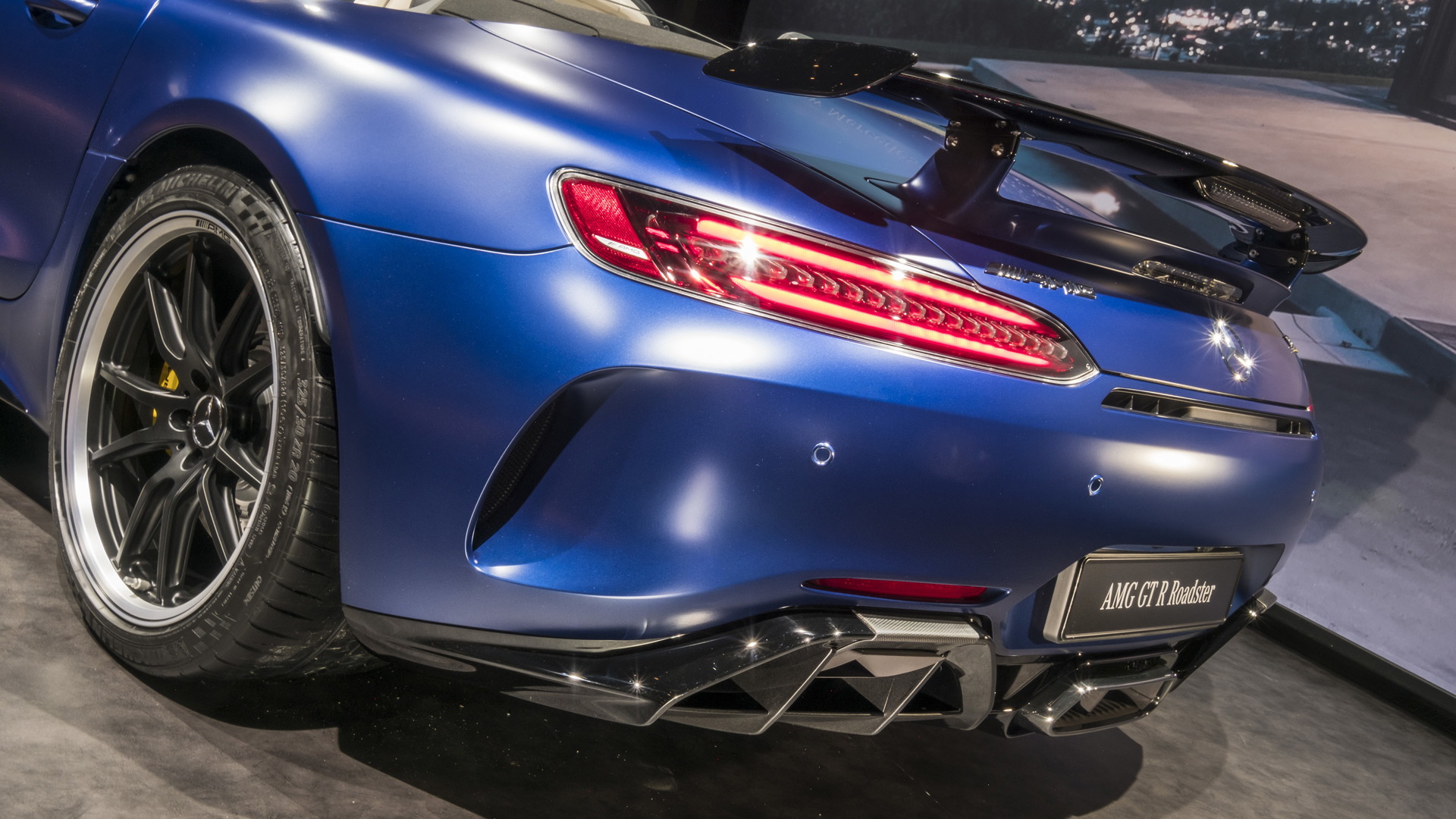 Mercedes-AMG's GT R sports car was developed with the sole purpose of putting down serious lap times, but for some track enthusiasts the allure of open-top driving is too powerful and for that reason the folks at AMG have developed the GT R Roadster, which was unveiled Tuesday at the 2019 Geneva International Motor Show.

AMG hasn't pulled any surprises with the design. The car is based on the recently updated version of AMG's GT sports car range, which means it features the latest headlight treatment along with a digital instrument cluster and cool digital controls in the V-8-inspired center console.

Like all Roadster versions of the GT, the roof consists of a three-layered automated soft-top supported by a lightweight structure combining aluminum, magnesium and steel. Additional roll-over protection is provided by an integrated aluminum cross-member, while an acoustic mat helps to reduce outside noise. The roof when down tucks away nicely in the trunk.

Power comes from the familiar 4.0-liter twin-turbocharged V-8, which in this instance matches the GT R coupe's 577 horsepower and guarantees 0-60 mph acceleration in 3.5 seconds and a top speed of 197 mph. The engine is mated to a 7-speed dual-clutch transmission mounted at the rear axle and spins the rear wheels only.

To ensure the car is equally at home at the race track, or cruising along a coastal road, the engineers worked on the suspension to provide a mix of comfort and performance. The rear suspension relies on motorsport-inspired spherical bearings on the lower wishbones instead of traditional bushings, a design that has no play, which leads to toe-in and camber remaining fixed even at high loads. This is joined by adjustable coil-over suspension and adaptive dampers, which through the driving modes selector can be set in a comfort setting to soften the ride.

Along with the specific suspension setup, staggered 19- and 20-inch wheels with Michelin Pilot Sport Cup 2 tires, and carbon-ceramic brakes, the GT R also has rear-wheel steering with as much as a degree and a half of possible motion. Up to 62 mph, the rear wheels turn in the opposite direction of the front wheels, for quicker responses in tight corners. Above that speed, the steer-by-wire system puts the rears in line with the front wheels, for better stability.

Just 750 examples of the GT R Roadster will be built for worldwide sale. Pricing hasn't been announced but expect to pay a premium on the $157,995 starting price of the coupe. Potential rivals include the Audi R8 Spyder Performance, Ferrari Portofino, and Jaguar F-Type SVR Convertible.

Mercedes has a busy standard at the Geneva auto show. The GT R Roadster is joined by two concept vehicles, one for Mercedes' Formula E car that will hit the track for the 2019/2020 season and another for what the brand is calling the EQV, essentially an electric version of the V-Class van. On top of this, there's an updated GLC, the new GLE53 and CLA Shooting Brake, and Final Edition versions of the S65 sedan, SLC, and SL.

To learn about other vehicles at the Swiss show, head to our dedicated hub.