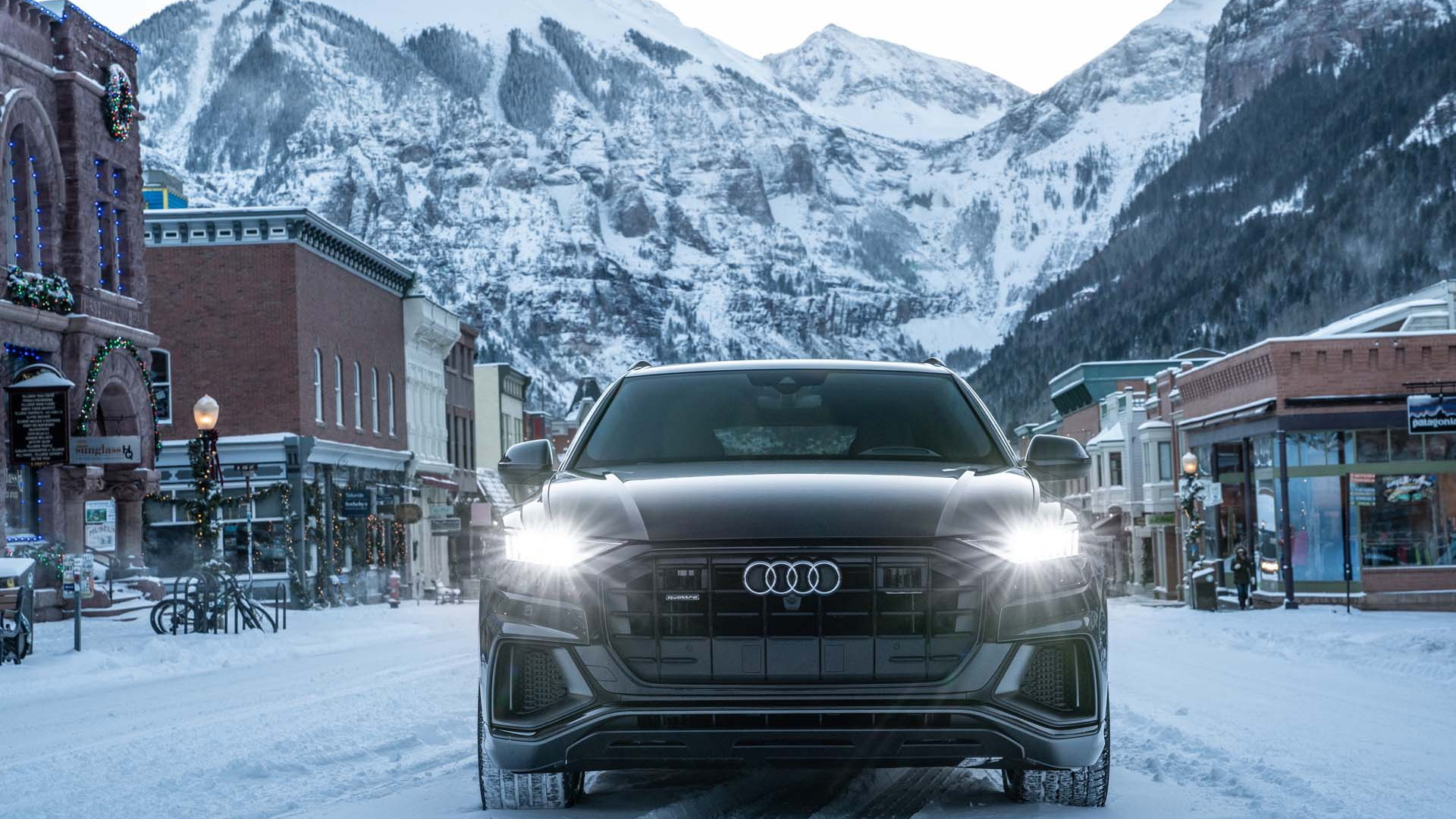 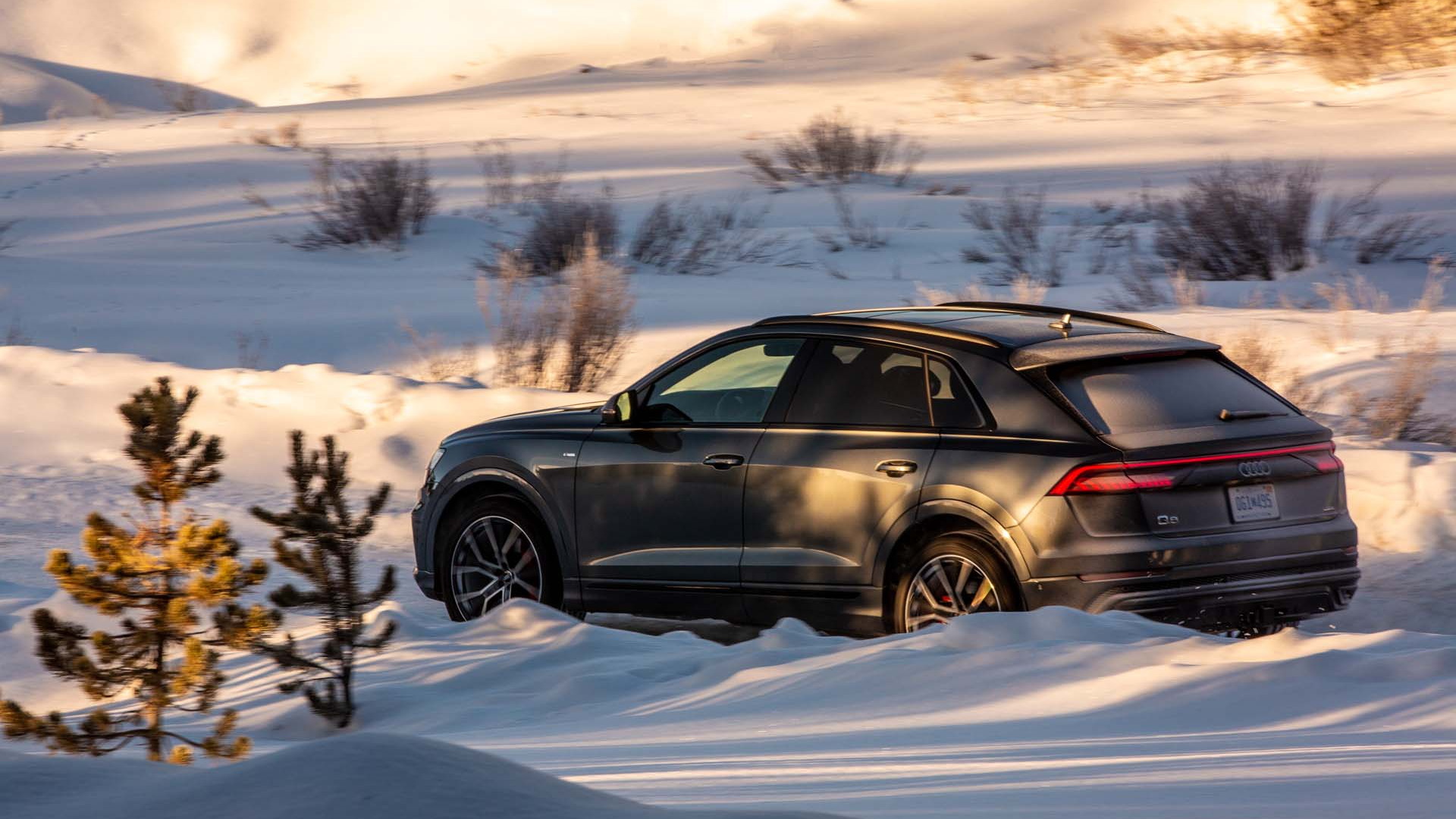 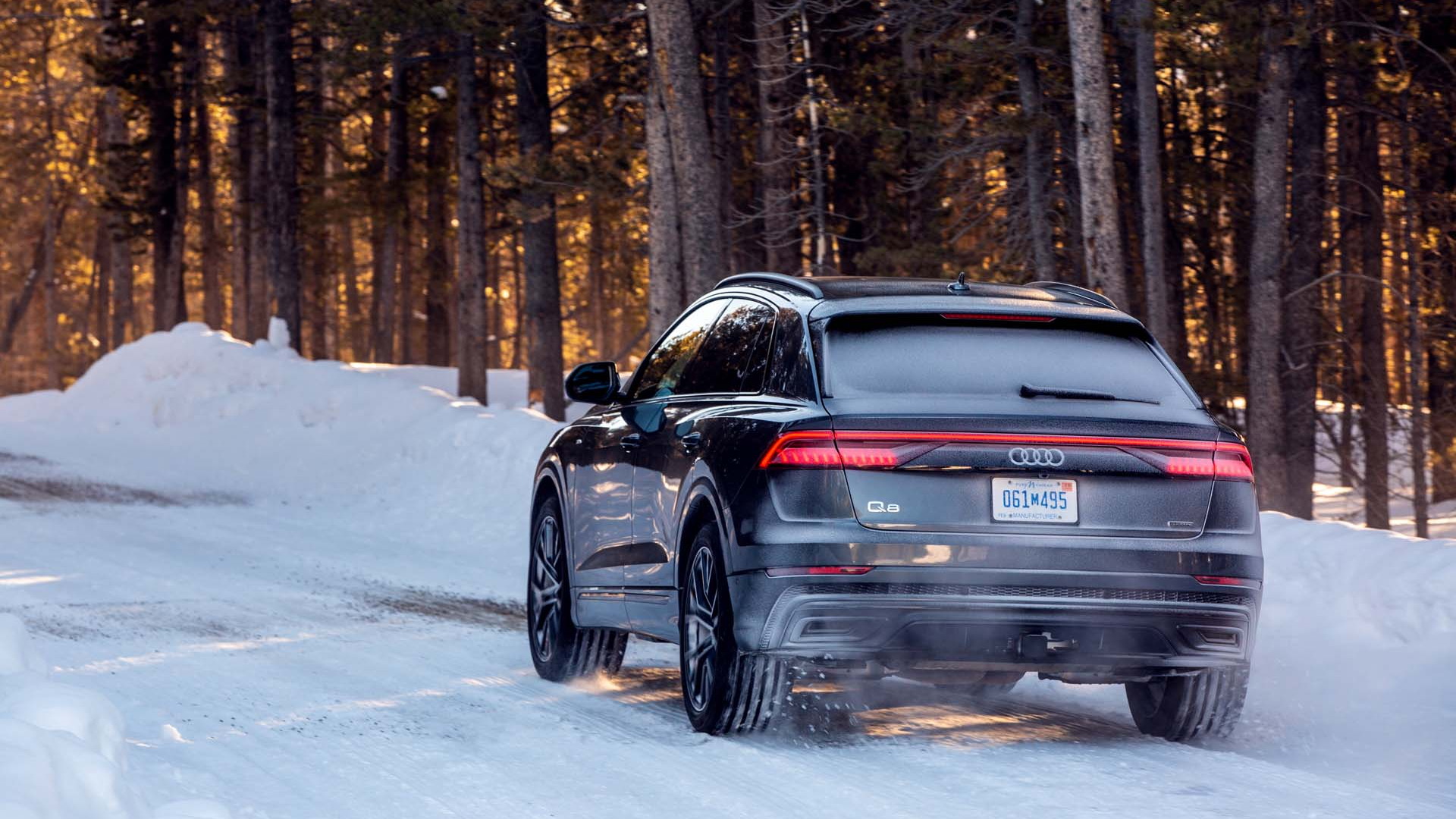 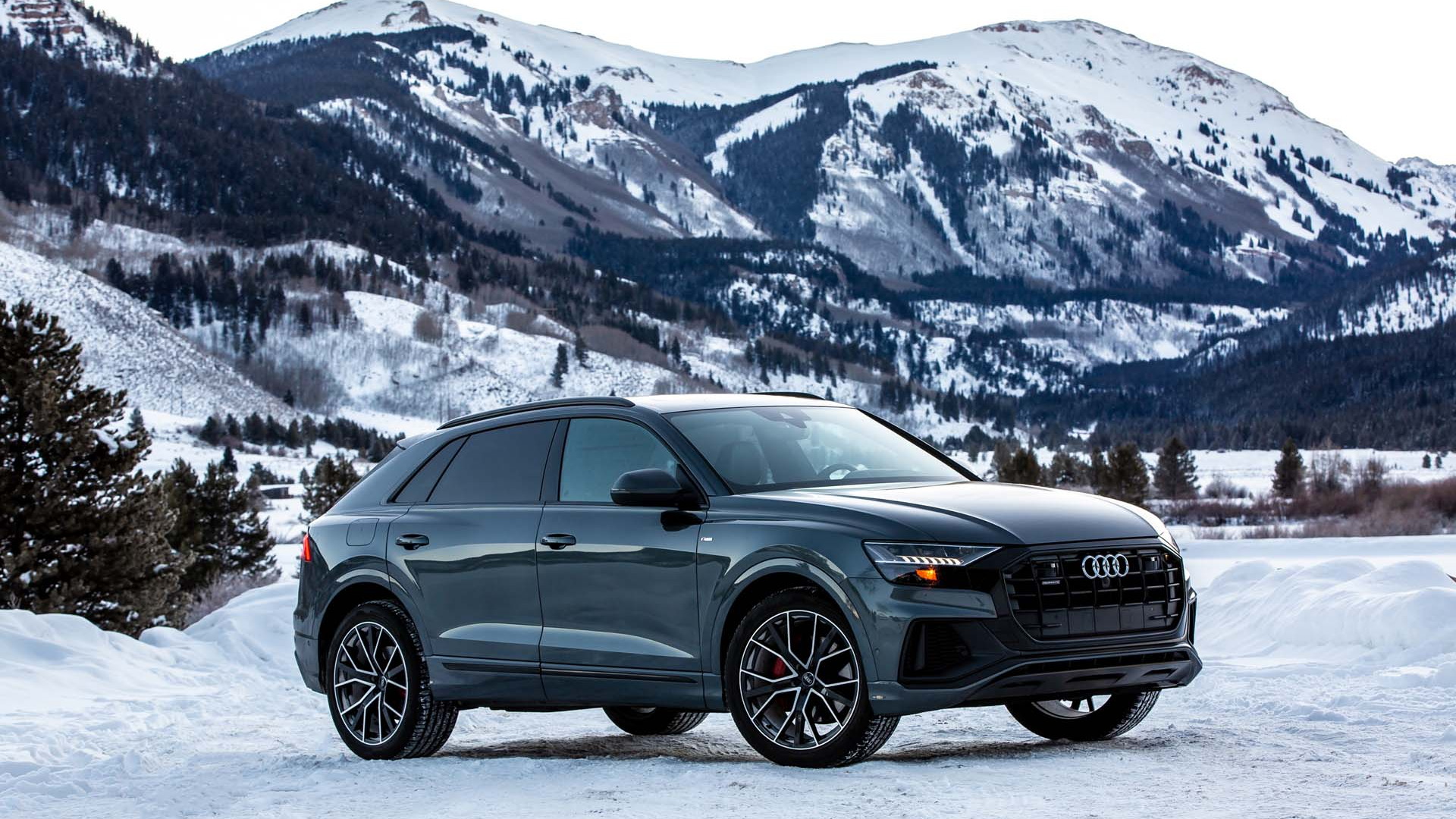 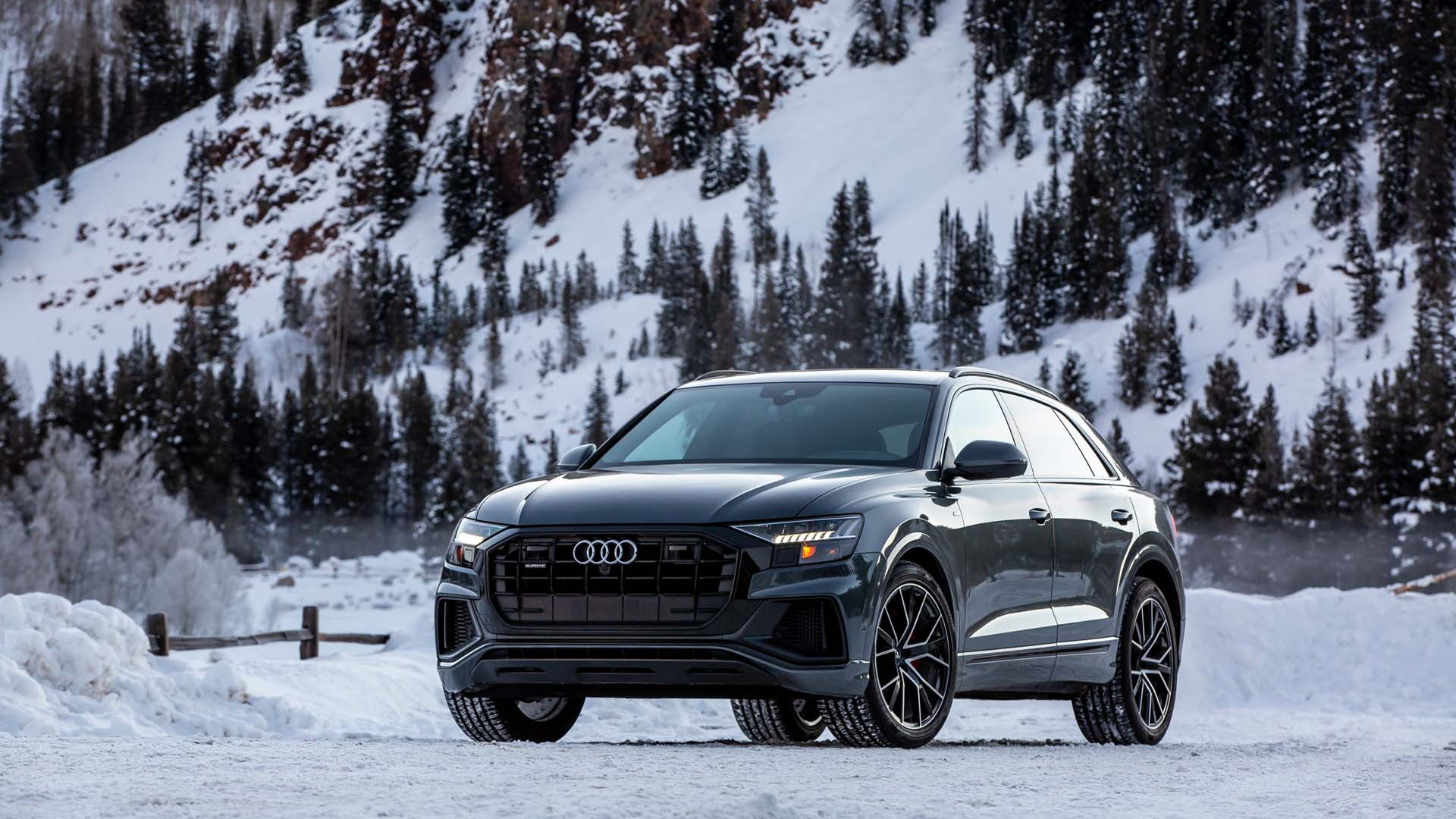 Lights flicker underneath champagne-dry powder that dusts the old marquee at the Egyptian Theatre in Park City, Utah.

The Egyptian’s been here since the 1920s. Back then, Park City was a glorified, dusty camp attached to a silver lode; a long ride but a world apart from Salt Lake City, which is now a 20-minute ride down Parley’s Canyon in the 2019 Audi Q8.

When it was built, the Egyptian was a brick-and-mortar commitment by the boomtown to finer arts like theater and opera, surprisingly common among the mining outposts that dot the Rockies in Utah and Colorado.

This morning, decades after the silver mines ran dry, Park City bustles with a new kind of gold rush. Sundance Film Festival organizers scurry in the cold morning at the Egyptian to ready the theater on Main Street as Hollywood’s winter home. The sun barely peeks over the Wasatch Mountains. Theaters like the Egyptian are the new star for Park City.

Outside, the Q8 basks in a similar dawn.

Its bleeding-edge matrix headlights and dancing taillight animation are a century removed from the Egyptian’s original yellow-tinted marquee and decades removed from Audi’s stellar sedans of the 1990s.

But both have bright lights for a new era.

Crossover at a crossroads

The goal for the Q8 was to sit on top of the automaker’s lineup for crossovers, but there are bigger brass rings to reach for Audi.

The Q8’s exterior draws flared fender blisters from the Ur-Quattro sports cars and a thick rear roof pillar looks like the Quattro’s hatch if you close one eye from 10 feet away. Any other similarities feel like a bigger stretch.

The all-wheel-drive system in the Q8 draws a more direct line—it’s actually called Quattro—and is a full-time system like the Audi racers of yesteryear. The system is rear-biased, too, but the Q8’s 5,000-pound heft serves a 2.5-ton anchor to sink any further comparisons.

The Q8 is the biggest, most expensive crossover from a brand that will sell more crossovers to U.S. buyers this year than anything else. Although it stops short of offering bleeding-edge, self-driving tech from the A8, or batteries like the E-tron, the Q8 will be Audi’s workhorse now and in the near-to-now. (What about the R8? Even honest whispers in Ingolstadt acknowledge that the supercar’s time is gone.)

The view behind the wheel of the 2019 Q8 doesn’t bear the symbolic weight of Audi’s future—even if the car’s curb weight does.

Swathed in leather and bursting with ambient LED strip lighting, the Q8 glorifies and prefers deliberation. The car’s 32 inches of high-definition screens (12.3 inches in the instrument cluster, 10.1 for infotainment, and 8.6 for climate and vehicle controls) are all presented in widescreen format—as long, flat, and seemingly unending as the horizon.

The steering is similarly relaxed like an unbroken sunset. The Q8 hardly relays any drama through its steering wheel, and while the standard adaptive suspension toggles between Comfort and Sport readily—it doesn’t stray too far from the former, even if it’s in the latter.

The Q8’s main mission is in comfort.

Press the start button and the Q8’s turbocharged 3.0-liter V-6 engine thrums quietly outside of thick dual-pane glass that wraps around a cabin that doubles as a sense-deprivation chamber.

Its 5.6-second sprint to 60 mph never feels rushed, and the V-6’s 335 horsepower feels confident among its contemporaries—quick but not groundbreaking stuff.

The Q8 shares much of its hardware with the Q7—wheelbase, powertrain, among other things—but skips the third row in favor of more spread-out space in the second row. With more than 40 inches of rear-seat leg room, the Q8’s best for full-grown kids or better yet, no kids at all.

The short of the long? The Q7’s good up until they leave for college. The Q8 is better when you don’t have to pay for college anymore.

That may be an affront to those who still consider Audi to be the poster child for all-wheel-drive blitzes up mountain passes, fueled by leaf blower-sized turbochargers and whistling wastegates.

The Q8 takes a bigger trophy for Audi: it’s easily the most comfortable crossover Audi makes and one of the best on sale today.

There’s more money out of that race-car fantasy and in to sales reality.

Time for honesty: Crossover sales figures and brand heritage do less for me than experimental short films. When the Q8 is most exciting is when the drive isn’t.

Life, family, and love have given me more experience on U.S. Highway 6 in Utah than I’d like to admit in mixed company.

The road that connects the Salt Lake metropolis to Moab—or for me sometimes, a shortcut to Interstate 70 en route to Denver—starts with promise south of Provo. The achingly pretty road winds on itself through Spanish Fork Canyon, mirrored by the Spanish Fork River. By the time the road reaches Helper and its Indiana Jones-inspired mine carved into a mountain, U.S. 6 irons out into a feature-length bore until Green River. The Book Cliffs to the east provide visual drama to a drive that feels more likely to end at Godot instead of a final destination.

It’s here that the Q8’s comfort and quiet ride are appreciated more than its adherence to a bygone era of sports cars.

Although the Q8 rides on at least 20-inch wheels (21- and 22-inchers are available), the flashy big dubs are tamed to veritable pillows by the time the standard adaptive suspension is done with them. The Q8’s optional air suspension? Nearly mandatory for 21-inchers, and 22-inchers are hardly advised for anyone with a family or personal history of back pain.

For hours, the Q8 slicks through the high-desert air as driver and passengers flick through smartphones and infotainment hardware. The main attraction is the Q8’s impressive three-screen setup that’s a blessing and a curse: more than 30 inches of crisp, beautifully rendered displays feel like they’re stuck in the white space between cutting-edge and out-of-date, when voice recognition renders a button for everything “that was so, like, 2017” in just a few years.

The Q8’s better trick is outside, in its matrix headlights that can illuminate the road ahead in ways federal regulators haven’t yet wrapped their heads (or laws) around.

The system, which can flood light into every corner of the road ahead that doesn’t include another car, was designed by the same man who penned the last-generation A7’s stunning curves.

In the Q8, the lights are another jewel that shows clearly the road ahead for Audi and its direction for premium vehicles.

Back in Park City, next to the Egyptian Theatre, the Q8 seems equally ready for its close-up as Audi’s newest star.