The only 1967 Ford Shelby Mustang GT500 Super Snake has been consigned to the docket for Mecum Auction’s Kissimmee, Florida, auction scheduled for February 3-13.

As Mecum Auctions tells the car’s story, it was commissioned from Shelby American by tire maker Goodyear, which wanted to use the car as a test bed for its new Thunderbolt line of whitewall tires.

Ford’s redesign of the Mustang for the 1967 model year meant there was room under the hood for the company’s 390cid big-block V8. Good enough for Ford, but not for Carroll Shelby, who opted instead of offer the Shelby GT500 powered by a modified Police Interceptor 428-cubic inch V-8 rated at 355 horsepower. Shelby would sell 2,048 examples of the GT500, compared with 1,175 small-block-powered GT350s.

Shelby was the West Coast distributor for Goodyear, which was preparing to launch its new Thunderbolt line as 15-inch “economy” tires. What better way to promote the new tires than to test them beneath a special one-off version of the GT500?

That special car was equipped with a specially built, 427cid version of the engine used in the Ford GT40 Mk II. The original plan was to build and sell 50 more GT500 Super Snakes.

The Super Snake was GT500 No. 544, equipped with a lightweight 427 racing engine, special rear axle and transmission.

Shelby sales manager Don McCain was quoted as describing the powerplant as “the mother of all 427s at that time.” The engine featured aluminum heads and water pump, forged crankshaft, Le Mans connecting rods, all designed to enable the engine to run at 600 horsepower and 6,000 rpm for 24 hours. The car also was equipped with stiffer suspension on the passenger side to deal with the forces encountered on the 5-mile oval Goodyear test track at San Angelo, Texas. 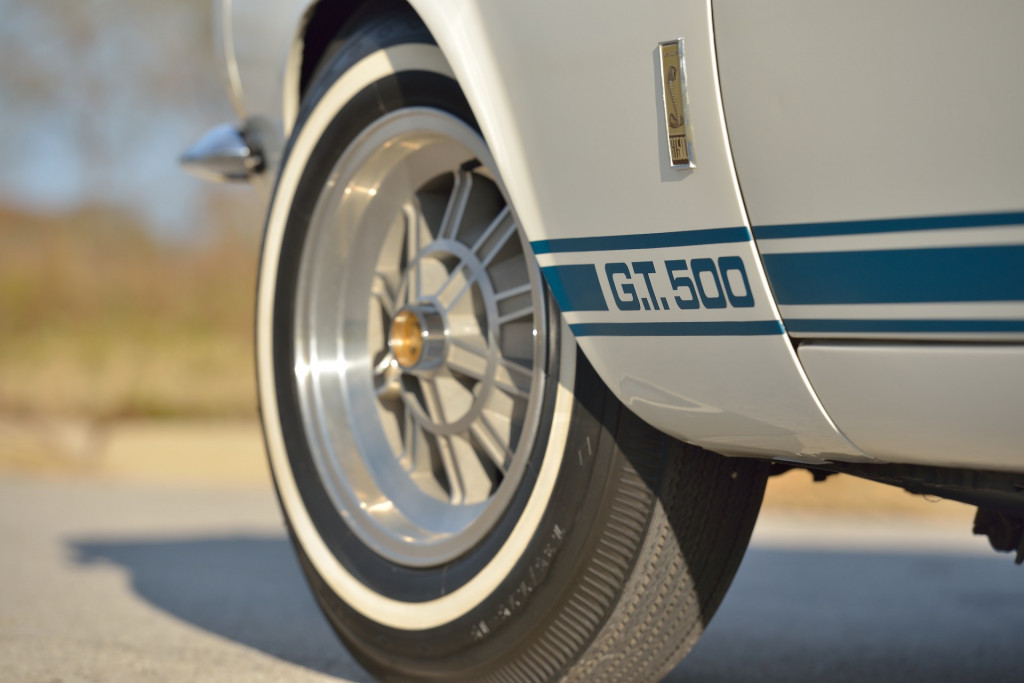 In testing, the car averaged 142 mph, reached a top speed of 170, and the Thunderbolt tires, skinniest ever on a GT500 and overinflated with nitrogen rather than ambient air to keep them cooler, still had 97 percent of their original tread after the 500-mile run.

Plans to produce other Super Snakes were abandoned because the car would have cost more than twice as much as a standard GT500, which would have made it more expensive than the Shelby 427 Cobra.

After testing, the GT500 Super Snake was displayed at Ford dealerships in California and Texas, where it was purchased by airline pilot James Hadden and James Gorman for $5,000. The pilots replaced the 2.73 gearset with a 4.10 unit for drag racing.

Mecum Auctions notes that the Shelby Registry reports the car was purchased in 1970 by Texas Bobby Pierce, who owned it for 25 years before selling it to David Loebenberg, a Florida resident. The car went to California seven years later with Charles Lillard, then sold — showing 26,000 miles on its odometer — to Mustang collector Richard Ellis of Illinois. 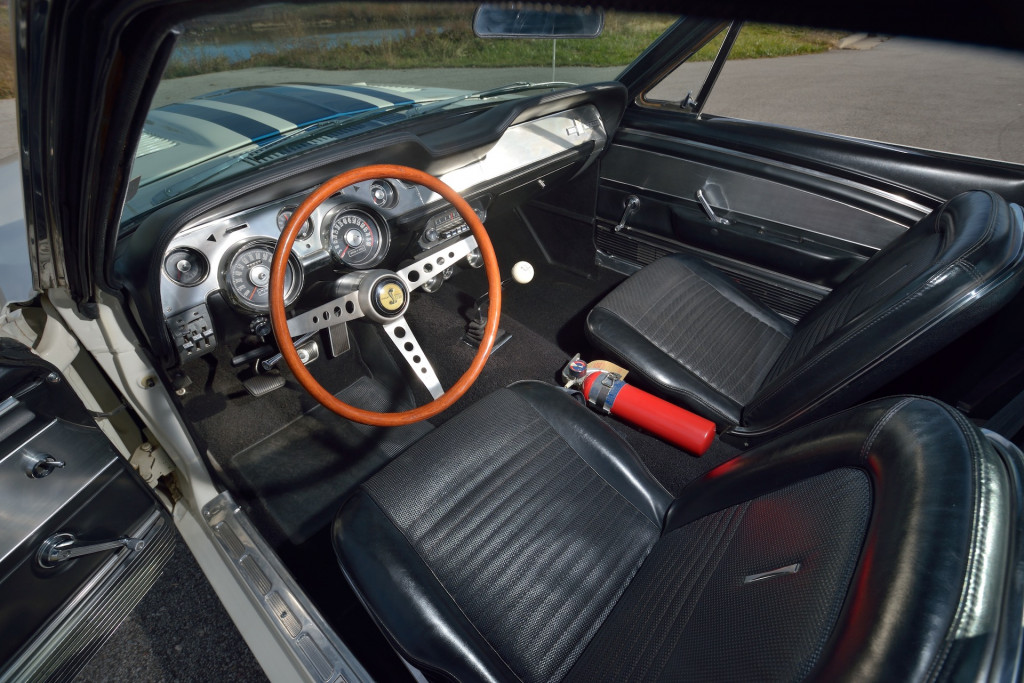 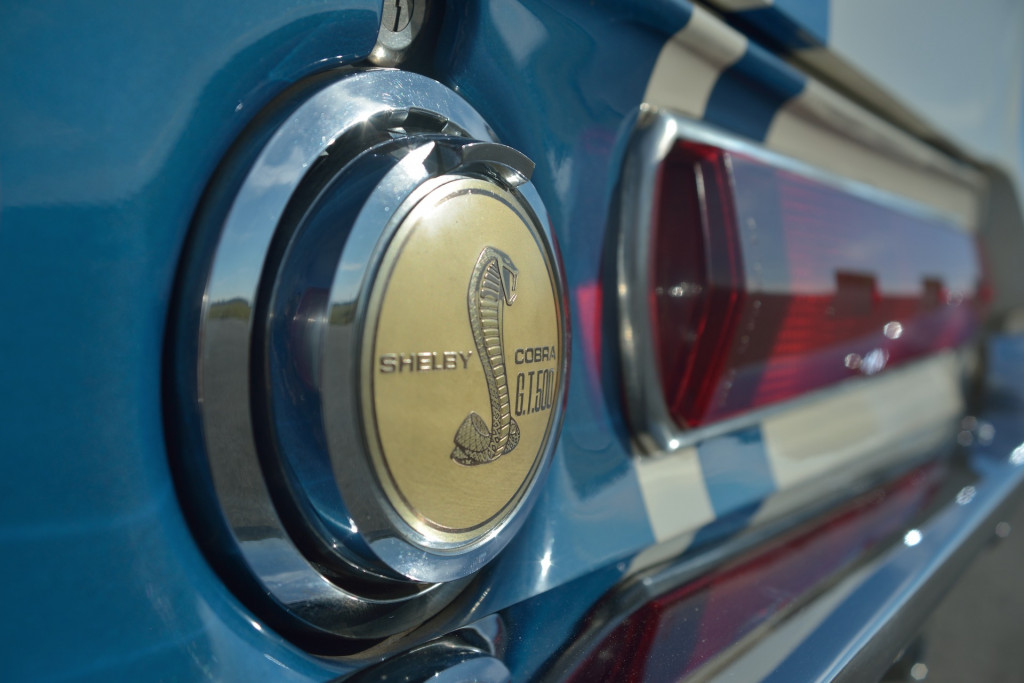 “I wanted to own this piece of Shelby history worse than anything,” Ellis told Auto Enthusiast Magazine in 2011. “It was well cared for by its previous owners, but I’ve put a lot of effort into returning it to the state it was in on the day of the tire test.

“The Thunderbolts were made for… well, boring family cars in the ‘60s, which is why nobody reproduces them or has even heard of them for 35 years.

“I’m sure Shelby pulled the original Thunderbolts and threw them away when the car got back to California (after its Texas test session).”

Ellis said he had “found what has to be the only surviving set in a warehouse in Akron, Ohio.”

Ellis sold the car in 2013 to Shelby collector John Wickey who, according to Mecum Auctions, “has fastidiously cared for this illustrious one-of-one Shelby super car for the past five years.”