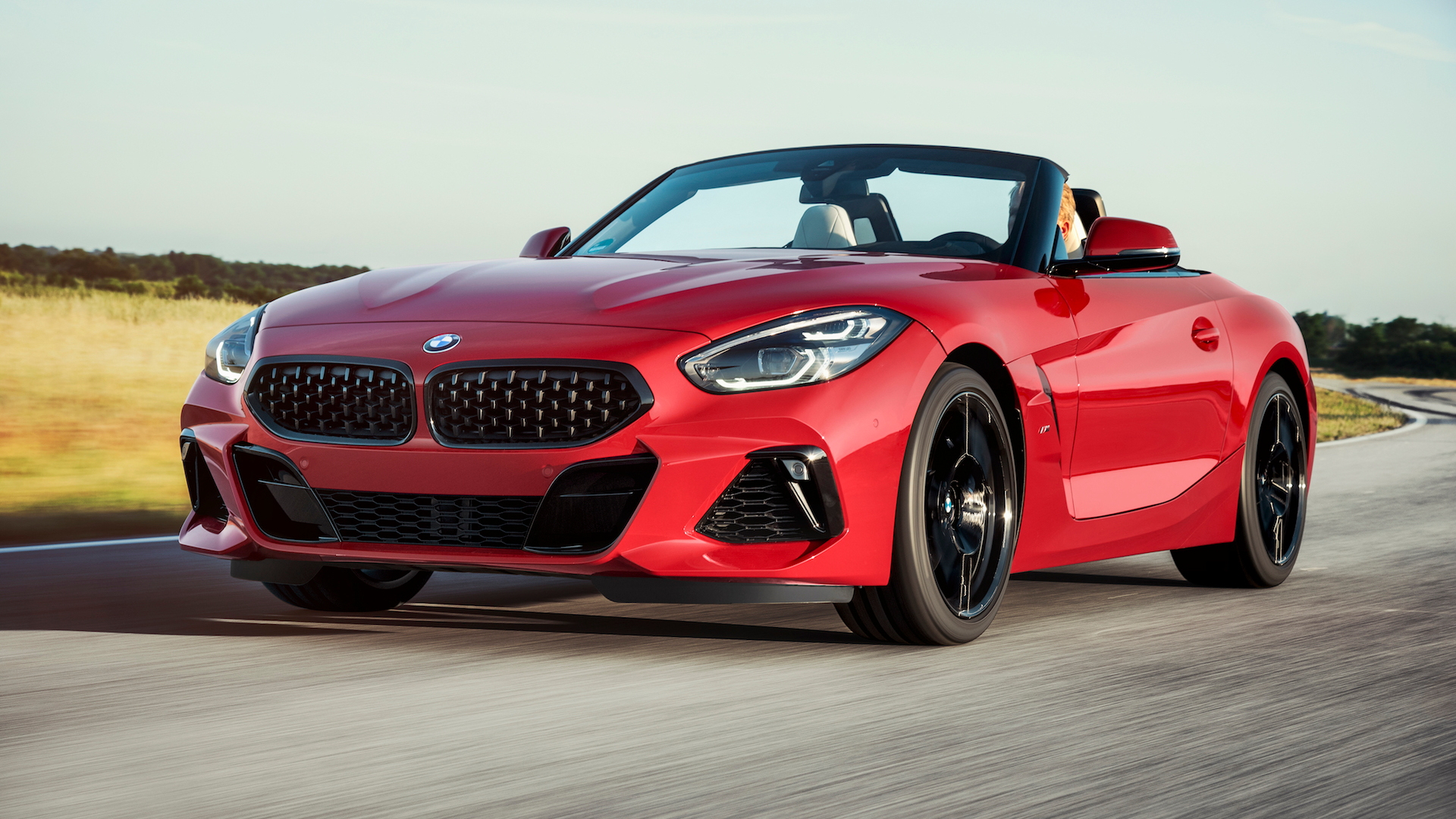 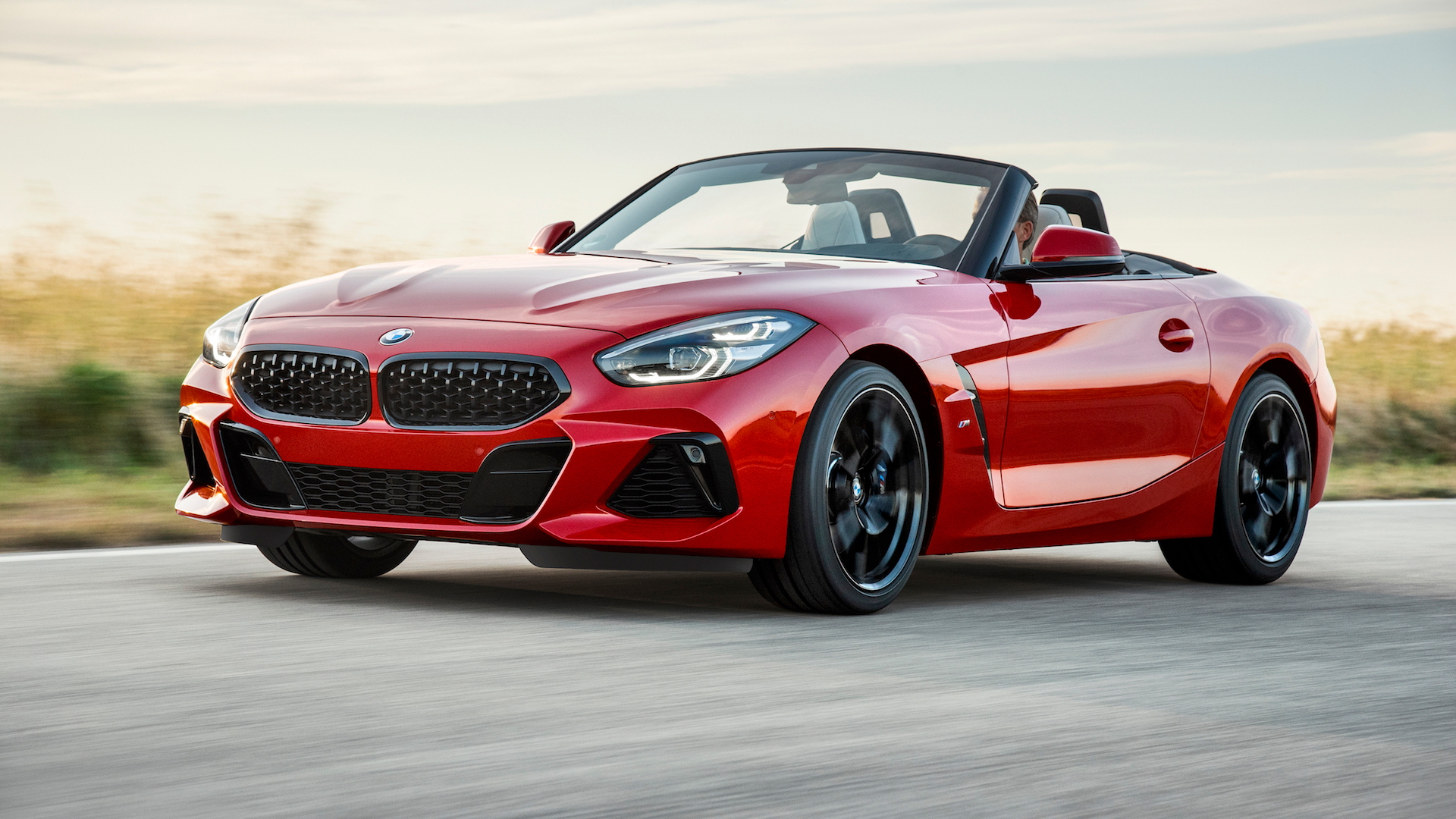 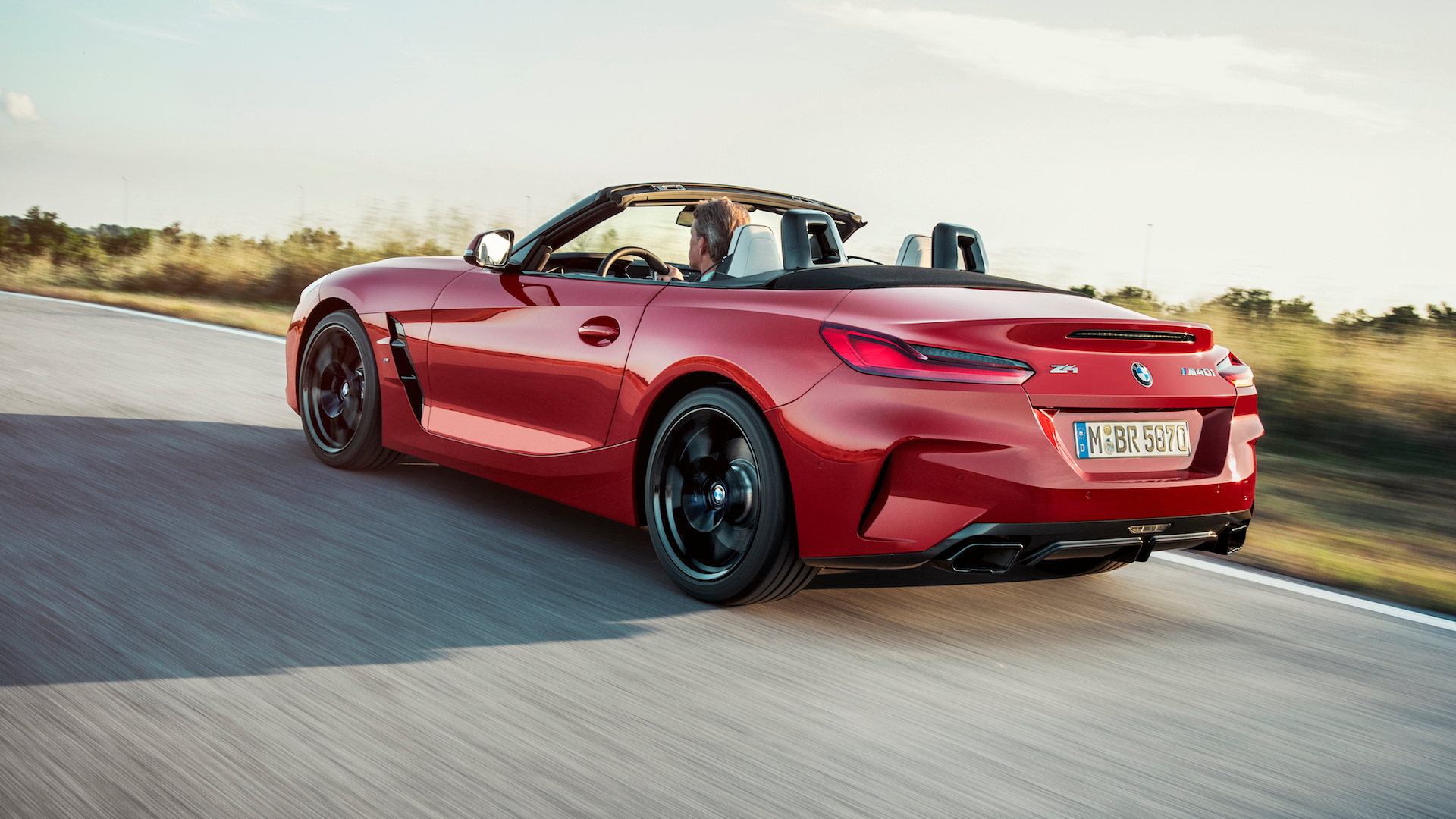 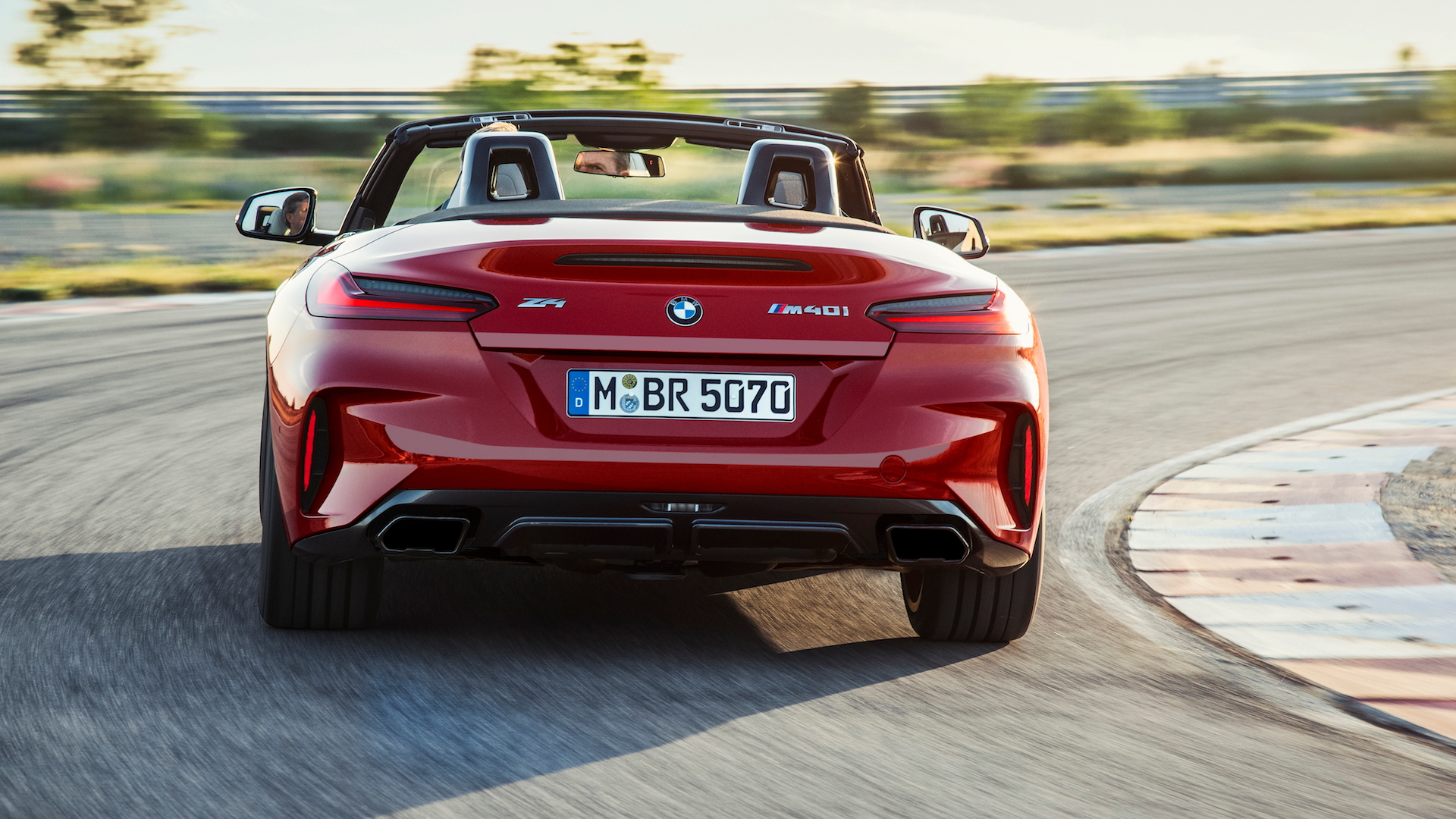 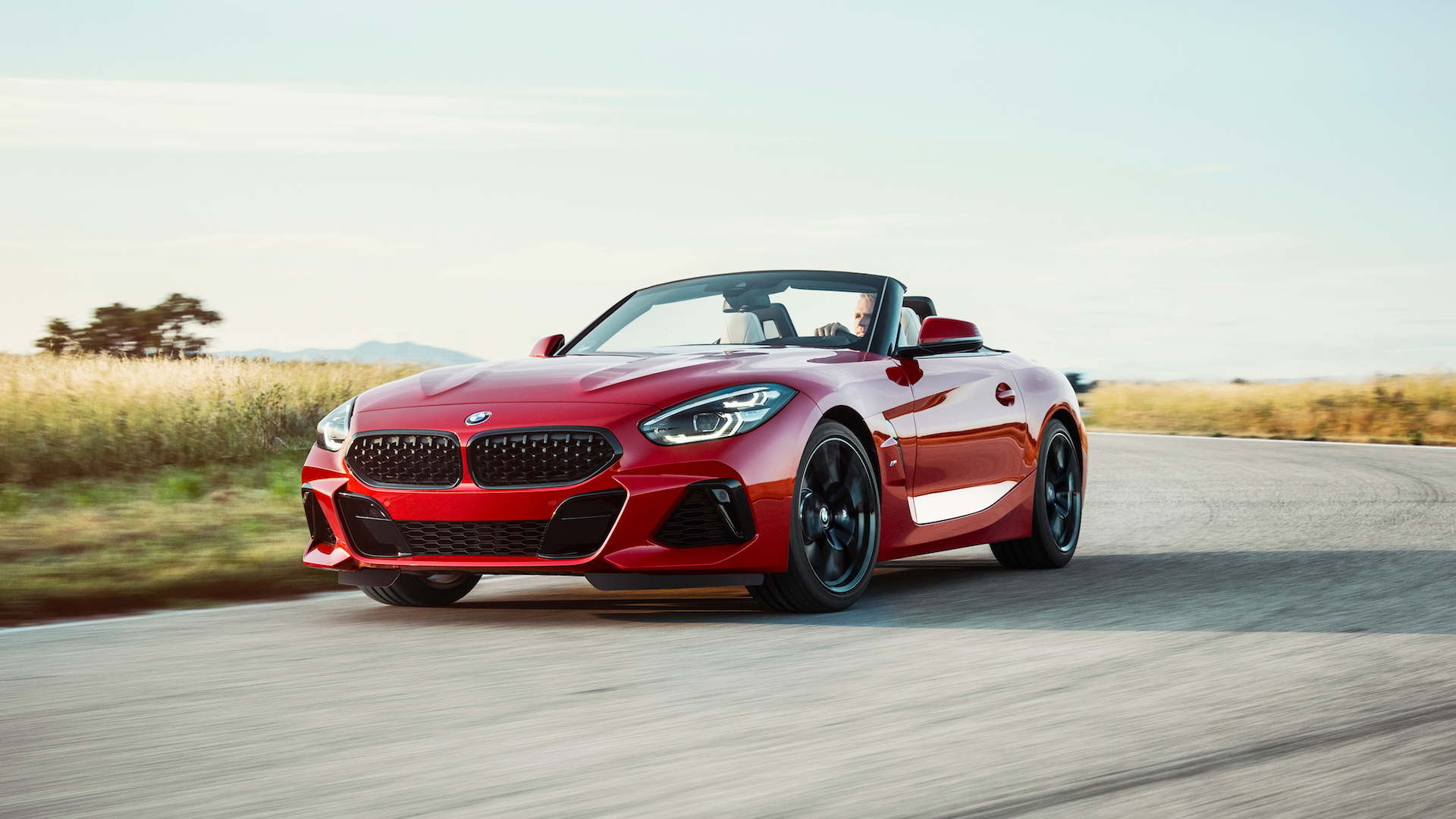 BMW showed the Z4 concept at Pebble Beach last year and further detailed it a month later at the Frankfurt motor show. This year, we finally see the production version. BMW unveiled the next generation of its two-seat roadster with a special 2019 Z4 M40i First Edition. The lines are now locked in and the look is low, aggressive, and perhaps a bit too busy up front.

The nose features larger air intakes for the signature BMW twin-kidney grille, and they are closer together than usual. The grilles are mesh with matching black surrounds on the M40i. Large air intakes are located at the corners, and the lines of the lower fascia are sharp and aggressive. BMW says adaptive LED headlights are available. The way all the lines come together on the nose can appear busy, though the effect is subdued a bit by the black trim.

The clamshell hood helps define a character line that angles up from each front wheel. An air breather behind the front wheel plays off this line, and the lower portion flows into a lower profile line that curves up at the rear.

An integrated spoiler kicks up at the rear, which also features large air ducts, dual exhaust, and a black diffuser.

The two-seat interior also features sport buckets and the BMW Live Cockpit Professional with two digital displays, including one in the instrument panel. A head-up display is also offered.

Occupants sit low and in the center of the car, a nod to the Z4's sporty character. BMW notes that the car has a 50/50 front/rear weight balance. The Z4's adjustable dampers, M Sport brakes, and an electronically controlled M Sport rear differential should give it sporty handling. The Z4 will share its platform with a reborn Toyota Supra.

The BMW Z4 M40i First Edition is powered by a turbocharged 3.0-liter inline-6 that propels the car to 60 mph in less than 4.4 seconds.

BMW noted that full Z4 model details and specifications will be announced on September 18. Expect news on the 4-cylinder models at that time. The Z4 will arrive in the U.S. next spring, and the M40i First Edition will go on sale in the second quarter of 2019.

For more from Monterey Car Week, see our dedicated hub.