James Bond and Aston Martin are a match made in Q Branch heaven. The titular character has driven his fair share of exotic machinery over the years, but the double 0 agent always seems to wind up back behind the wheel of an Aston Martin, the most iconic of which is surely the DB5.

One of the coupes used for the filming of "Goldfinger" met a tragic fate when it was dumped into the sea. Or was it?

An investigation is on the trail of an old DB5, and the particular example could just be the missing Bond mobile.

For a number of Bond fans, "Goldfinger" ranks pretty high up on the list of all-time greats within the series. We have Sean Connery as Bond tracking down Auric Goldfinger while doing...what he does with Pussy Galore. Also, we have the Aston Martin DB5 serving as Bond's preferred method of transportation. In fact, the DB5 is so connected to the James Bond character that it winds up appearing in several more films, including the modern flicks helmed by Daniel Craig.

According to Auto Classics, after "Goldfinger" finished filming, one of the screen-used DB5s was sold to a collector named Richard Losee. He paid $12,000 for the car before flipping it to a Florida businessmen who paid $25,000 for it. The car was kept in an airplane hangar at the Boca Raton airport, and it's from there where it disappeared sometime around 1997. 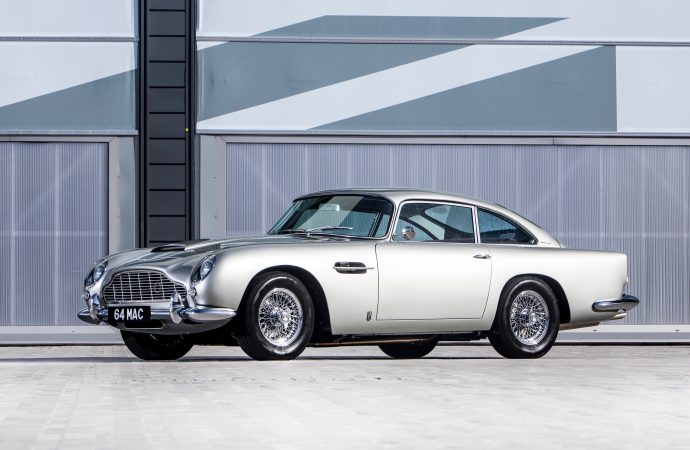 The theft remains a mystery to this day. There was no alarms set off and no guards were disturbed. Authorities only found some tires marks on the ground in the spot once occupied by the famous British grand tourer. A rumor began to circulate that the car was flown out over the Keys and then dumped into the water. That seems like an odd end for a valuable car, especially one where someone went to a lot of trouble to free it from its hangar.

Now investigators believe they may have located the car. Christopher Marinello is the Chief Executive of Art Recovery International, and he's been given a tip that points to the car sitting in a collection in the Middle East.

"As there are many Aston Martins, it is very important that we get a shot of the chassis number, DP/216/1," he said. "This is what we are looking for, as it is very specific to the vehicle."

Getting a close-up look at the car in the Middle East will allow investigators the chance to either rule this one out as a possible fake or determine it's the long-lost DB5. Though getting that close-up look could prove rather tricky.

Would you want investigators pouring over your potentially ill-gotten Aston Martin? For now the case remains unresolved, but it sounds like those invested in finding the car are hot on its trail.