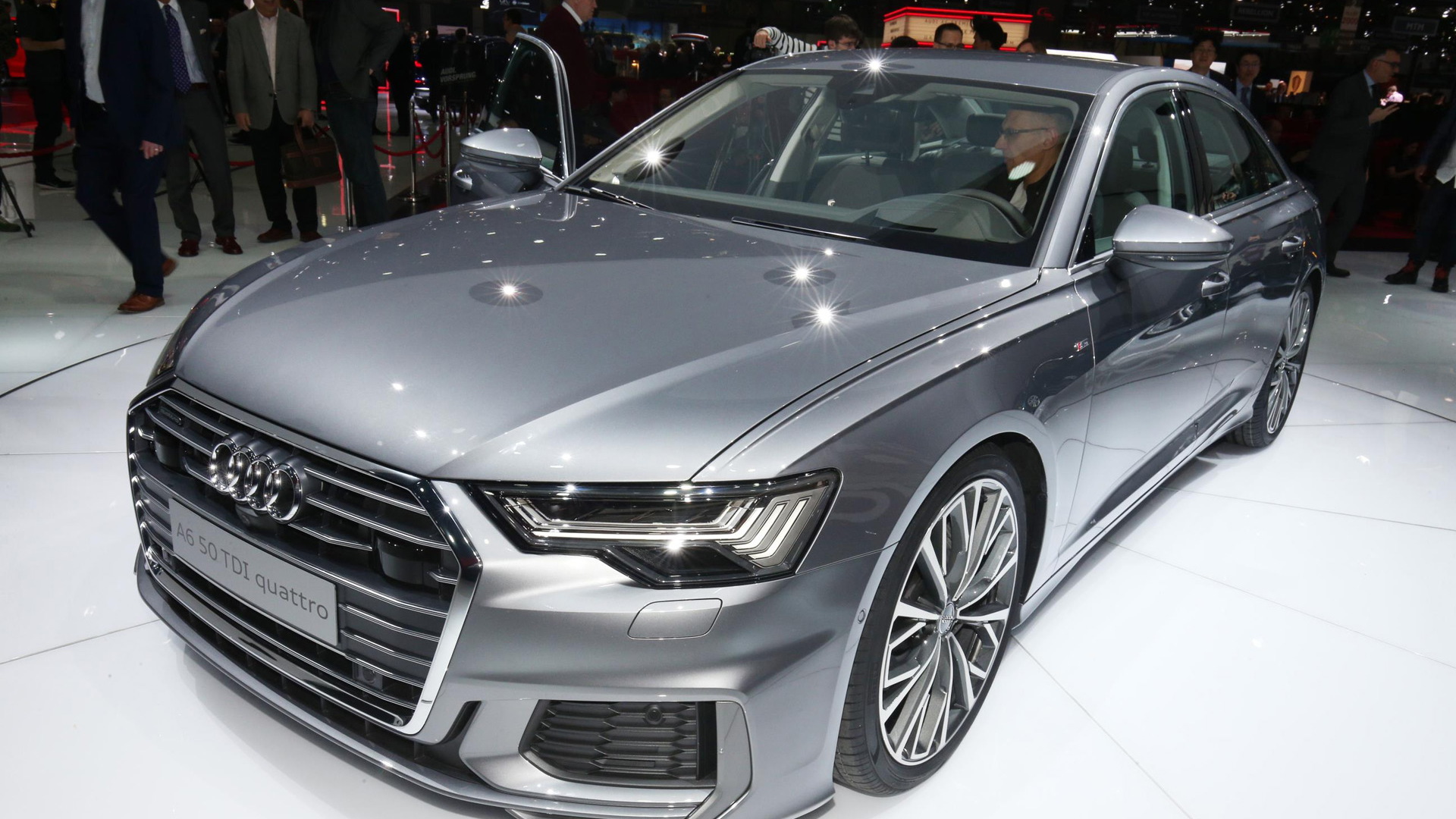 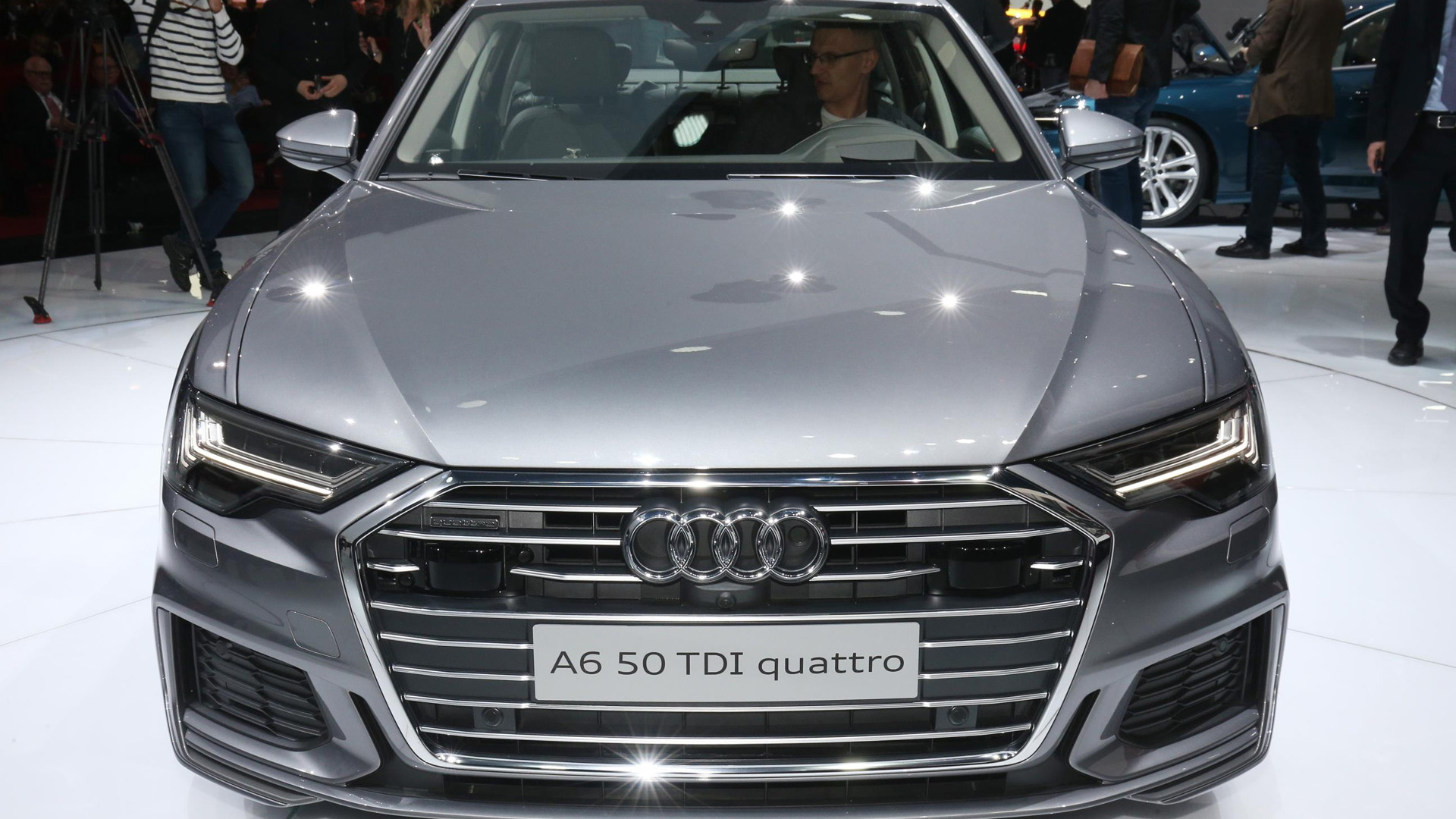 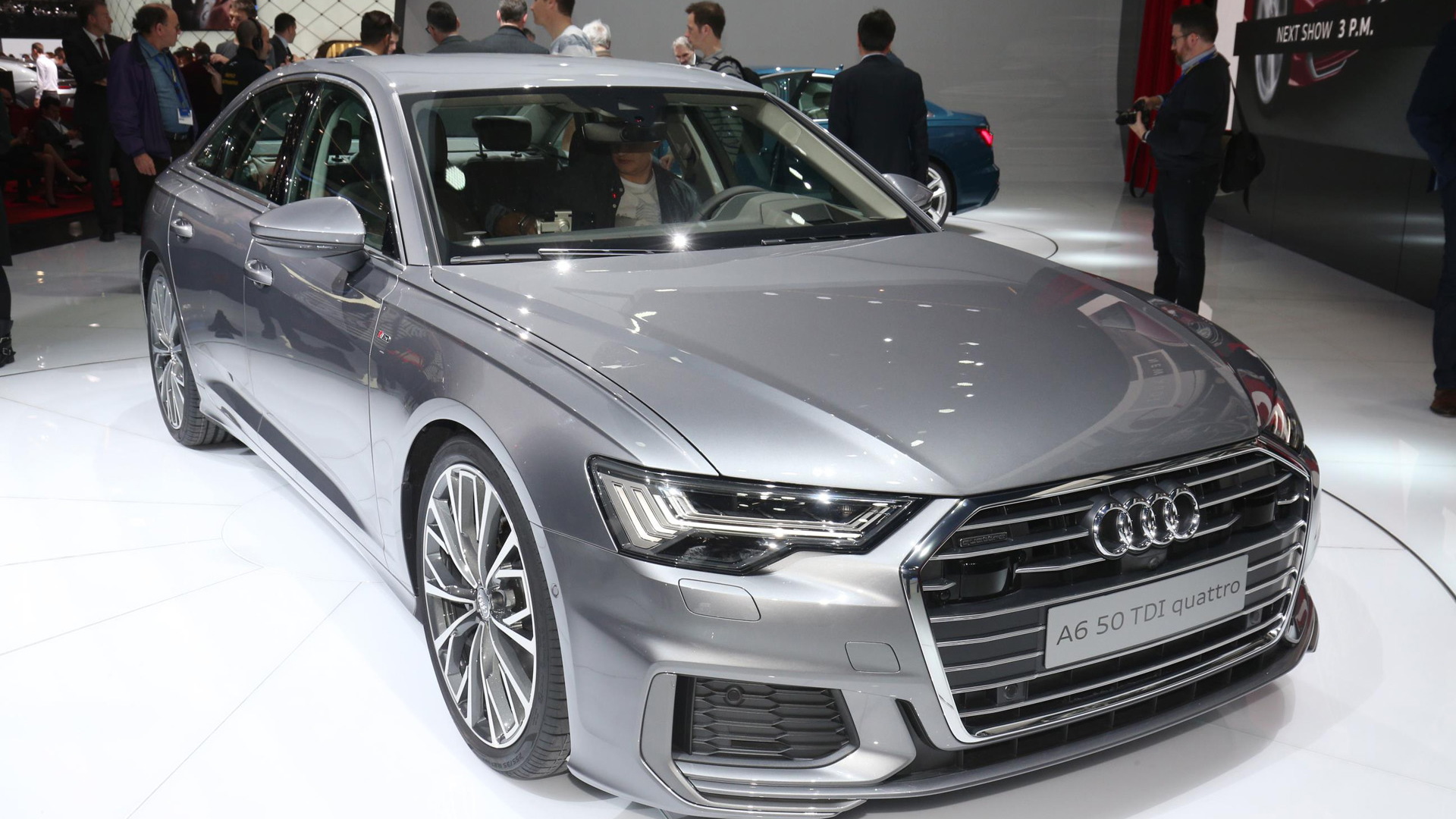 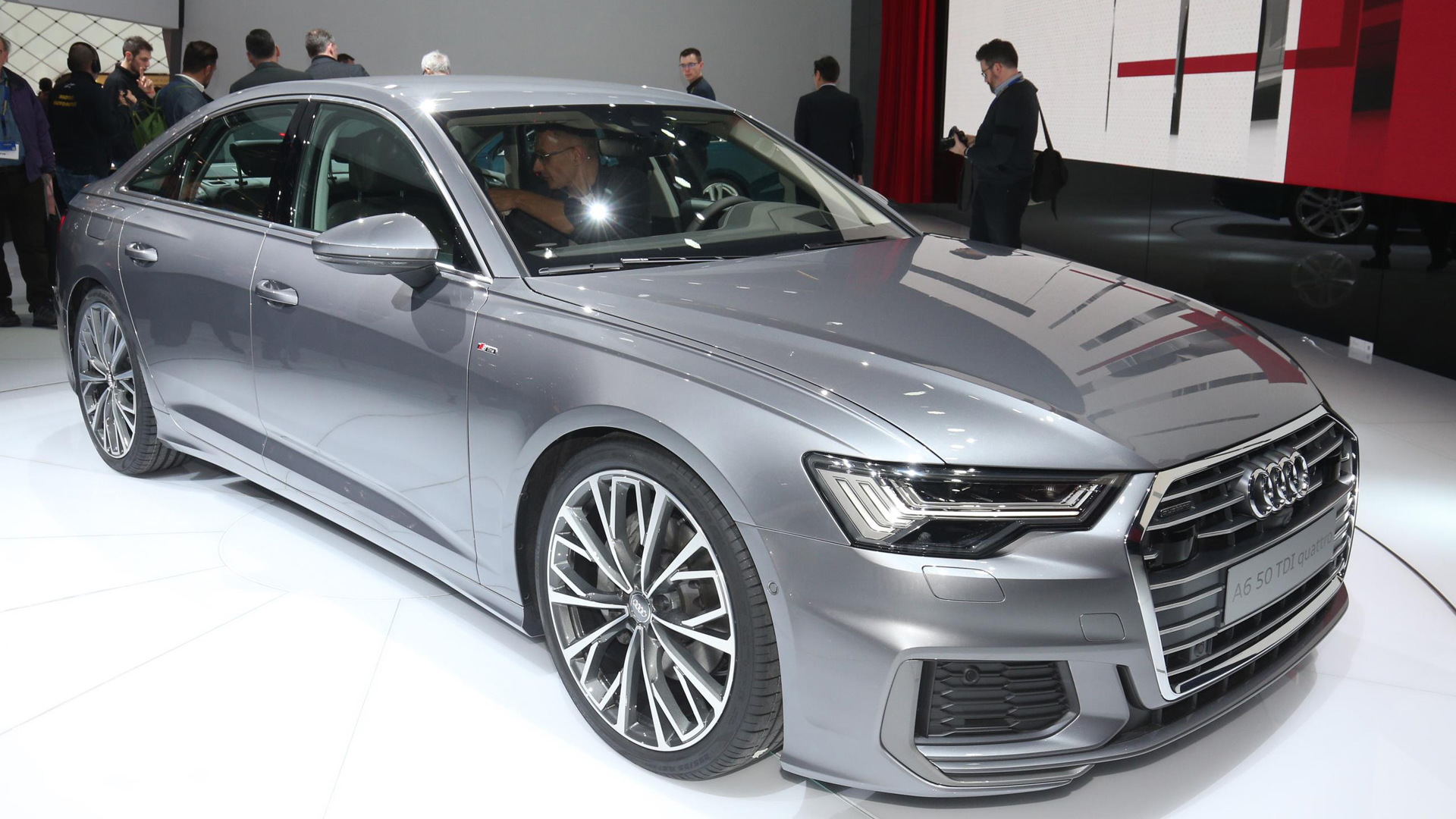 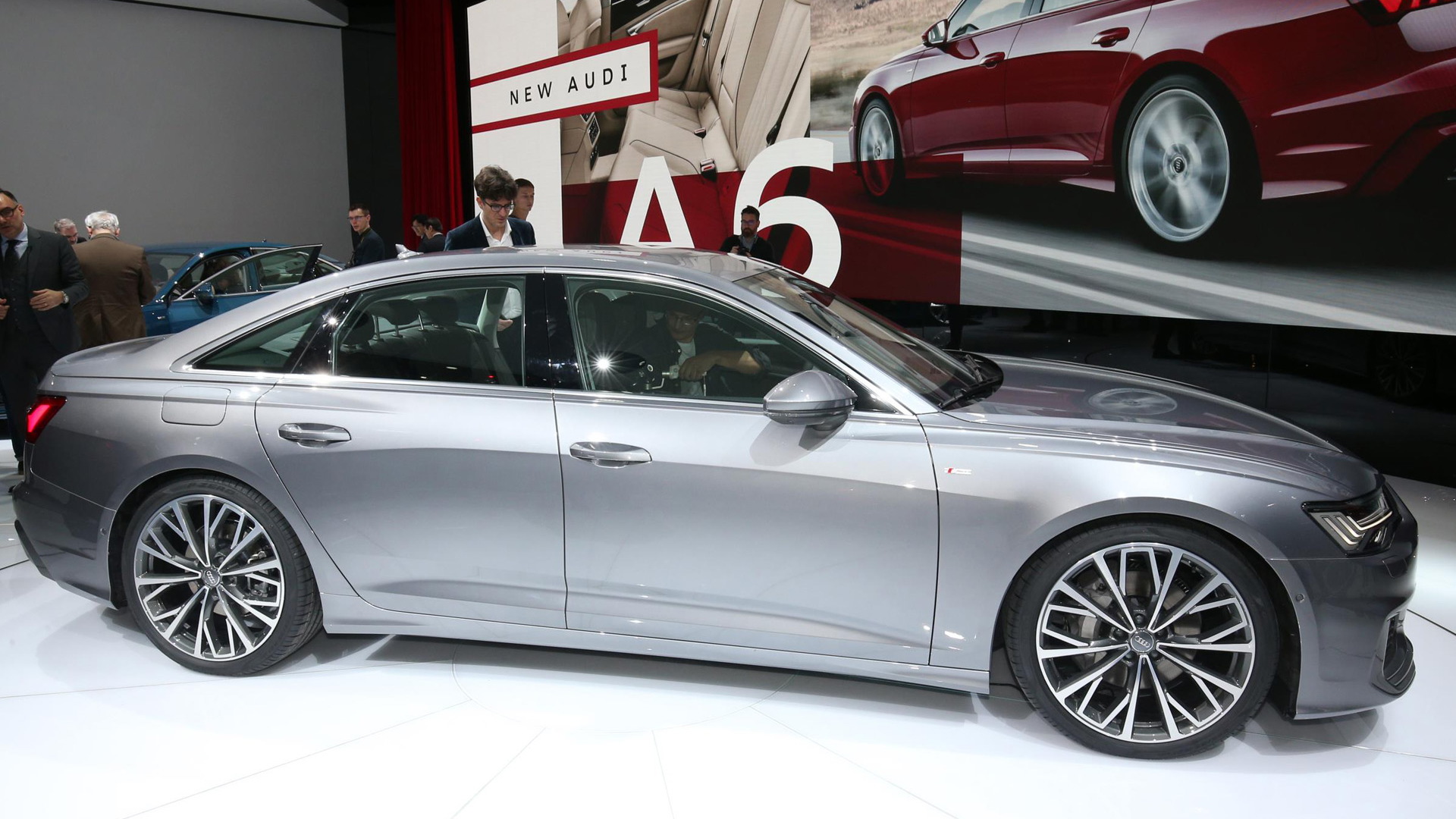 The new 2019 Audi A6 was mostly telegraphed.

The luxury four-door sedan that was revealed Tuesday at the 2018 Geneva International Motor Show follows the same jabs that the larger 2019 Audi A8 and 2019 Audi A7 threw first with a mid-size uppercut from Ingolstadt. The A6 combines technology found in the opulent full-sizer and sultry sportback with a raft of fuel-saving features.

Whether the new sedan is a knockout on the road, we'll have to wait and see.

Audi detailed two engines for the A6, although only one is likely headed to the U.S. A 3.0-liter turbocharged V-6 likely will be the first available engine in the States, rated at 340 horsepower and 369 pound-feet of torque. A 7-speed dual-clutch automatic will be standard in Europe for the new A6, although it's possible that an 8-speed unit is swapped when it makes the trip overseas. According to Audi, the A6 will sprint to 62 mph in 5.1 seconds when equipped with the gas engine. A turbodiesel initially will be offered in Europe, but it's not likely in the U.S. because reasons.

All-wheel drive is standard equipment on the A6, and an optional sport differential will be made available for certain models. For the first time, the A6 will feature four-wheel steering that can dial in up to 5 degrees of counter-steering at slow speeds for better maneuverability, or in concert with the front wheels at high speeds for better handling.

The new A6 rides atop a stiffer frame, with a mixture of steel and aluminum in body panels and suspension components for lighter weight. Audi will offer its variable steering ratio system in the A6, which can vary quickness from an impossibly fast and agile 9.5:1, to a lax 16.5:1 for comfortable long-distance cruising.

Like the A7 and A8, the A6 should arrive in the U.S. with a standard mild-hybrid powertrain that cuts fuel consumption in several ways, including "sailing" up to 100 mph, or a start/stop system than can cut idling while braking at speeds up to 13 mph.

Screen size isn't the only trick in the A6; in Europe, the sedan can be started without a key—just an Android smartphone.

It's unclear if that last feature makes the trip across the pond but it's worth noting that when the 2019 Audi A8 was announced, it included self-driving features that weren't yet entirely legal for U.S. roads. Audi, along with other carmakers, led a congressional push for exceptions that paved the way for those features in the A8.

Aside from acts of Congress, the A6 includes available safety features such as active lane control and adaptive cruise control, parking assist, vehicle-to-infrastructure hardware, and a raft of sensors and cameras that could help the A6 avoid crashes.

Inside, the A6 is larger with more room for passengers and cargo, and interior lighting in up to 30 different shades. Audi notes that the trunk of the A6 will hold two golf bags simultaneously.

The A6 sports conservative styling next to the A7, and the overall look is evolutionary for the sedan. Following cues from the A4 and A5, the A6 is sharper than its predecessor with deeper creases and a bulging hood.

Audi skipped the A4/A5's clamshell hood opening for the A6, but the larger sedan offers exterior lighting borrowed from tonier models. The A6 has its own lighting "signature" in the front and rear that takes cues from the larger cars, although it's unclear if the A6 will offer the same startup routine as the bigger sedans.

The A6 should make a showroom appearance later this year. Pricing information will be announced closer to the market launch.

For additional coverage from the Geneva auto show, head to our dedicated hub.