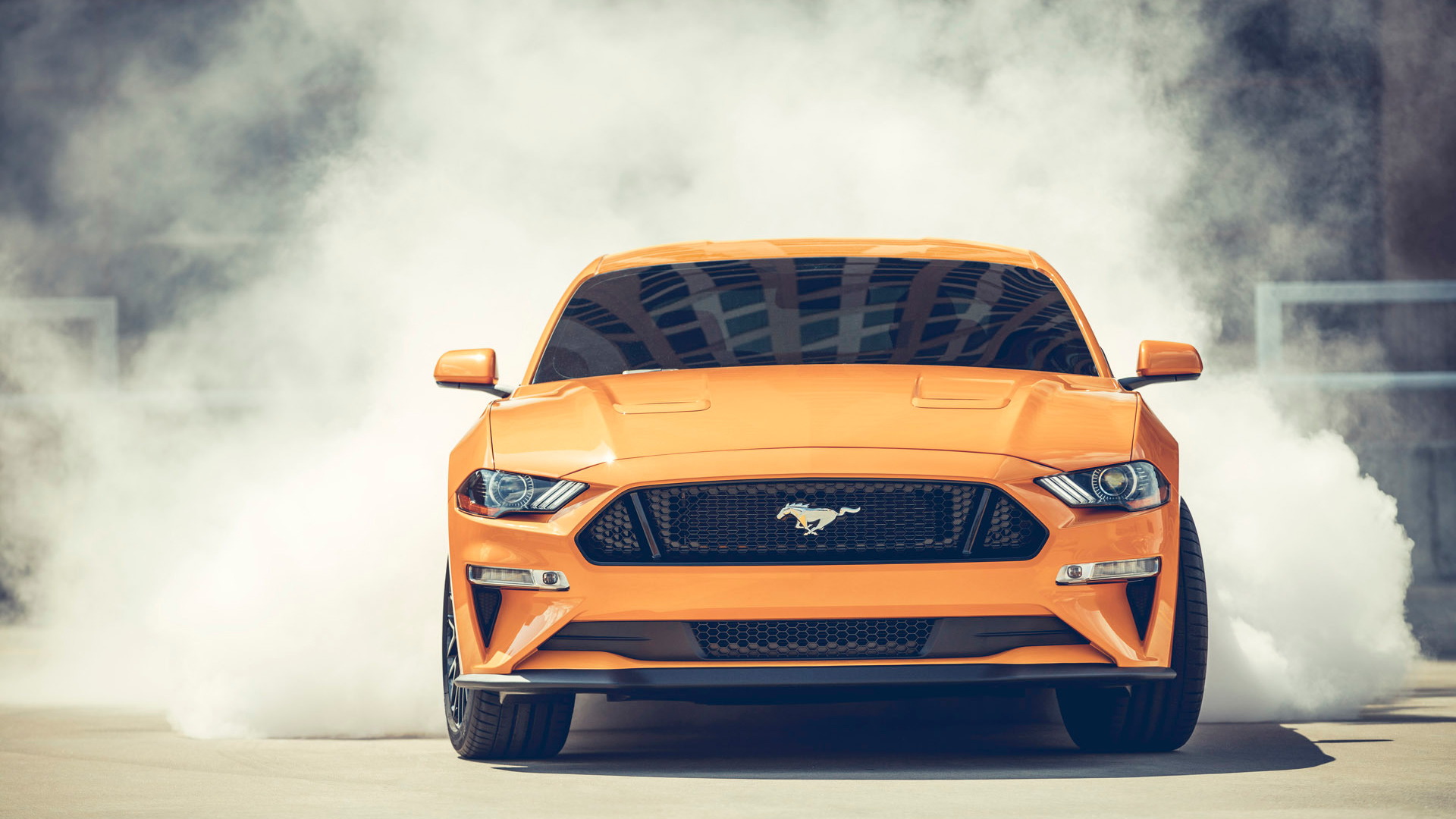 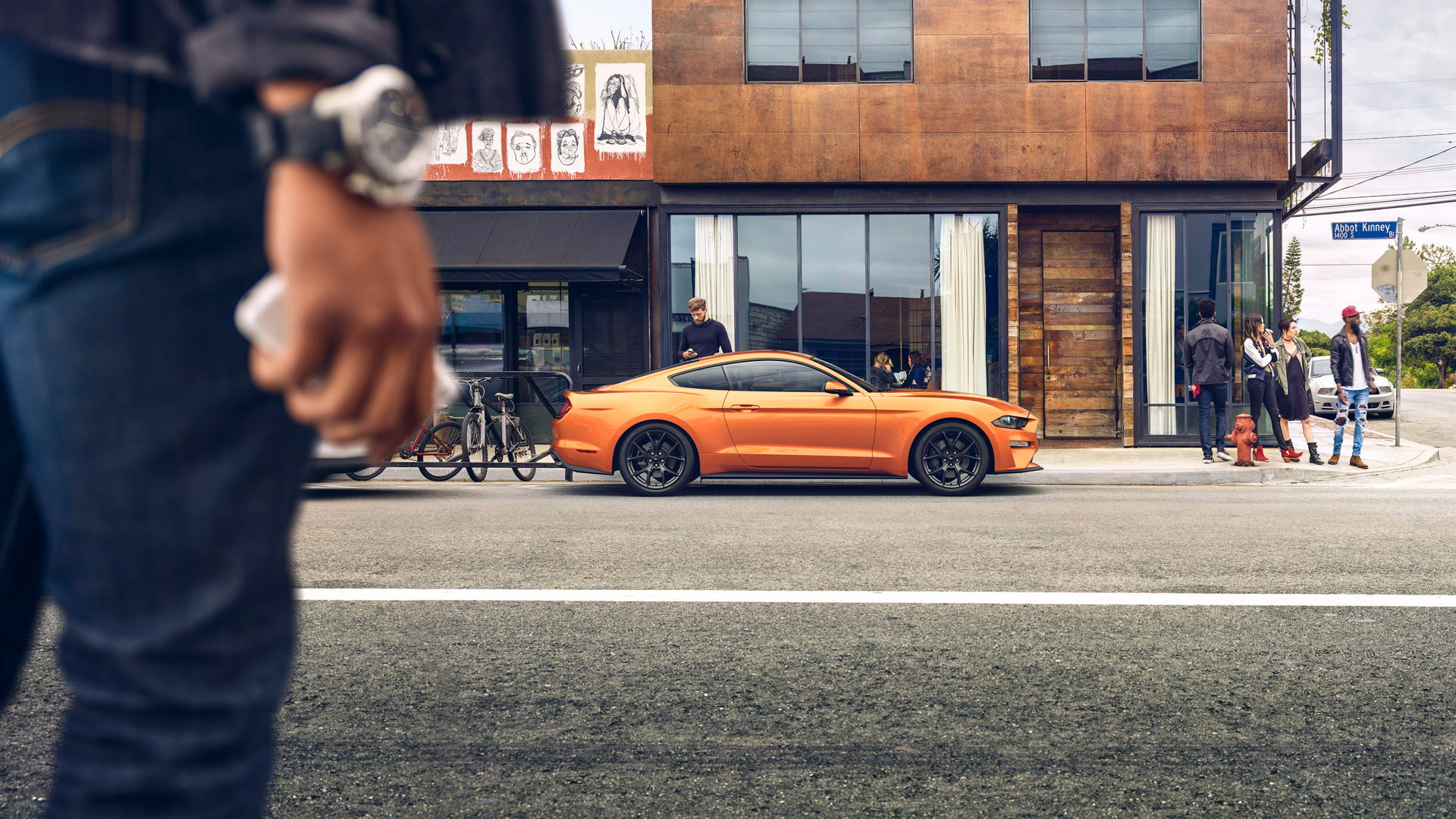 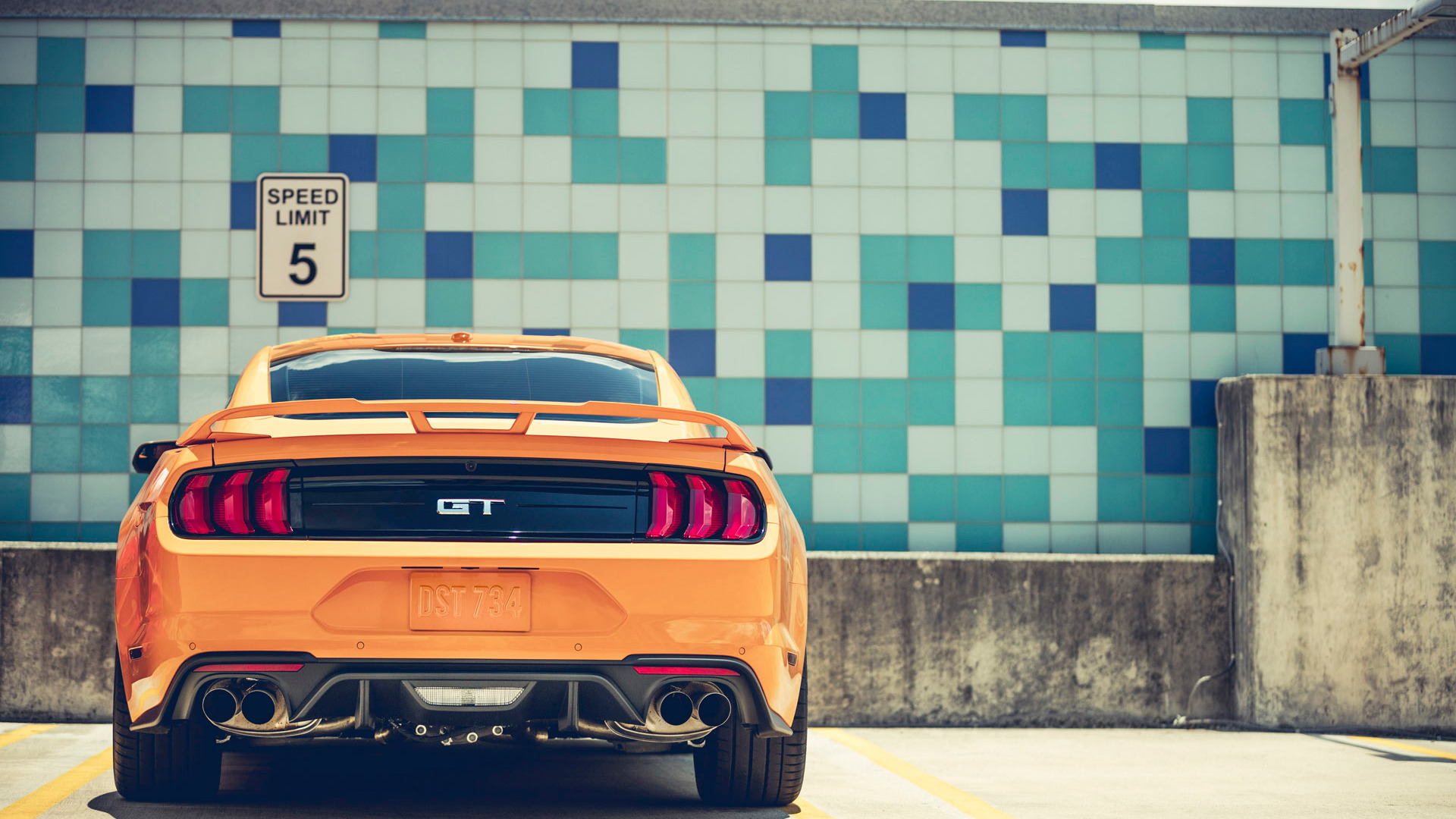 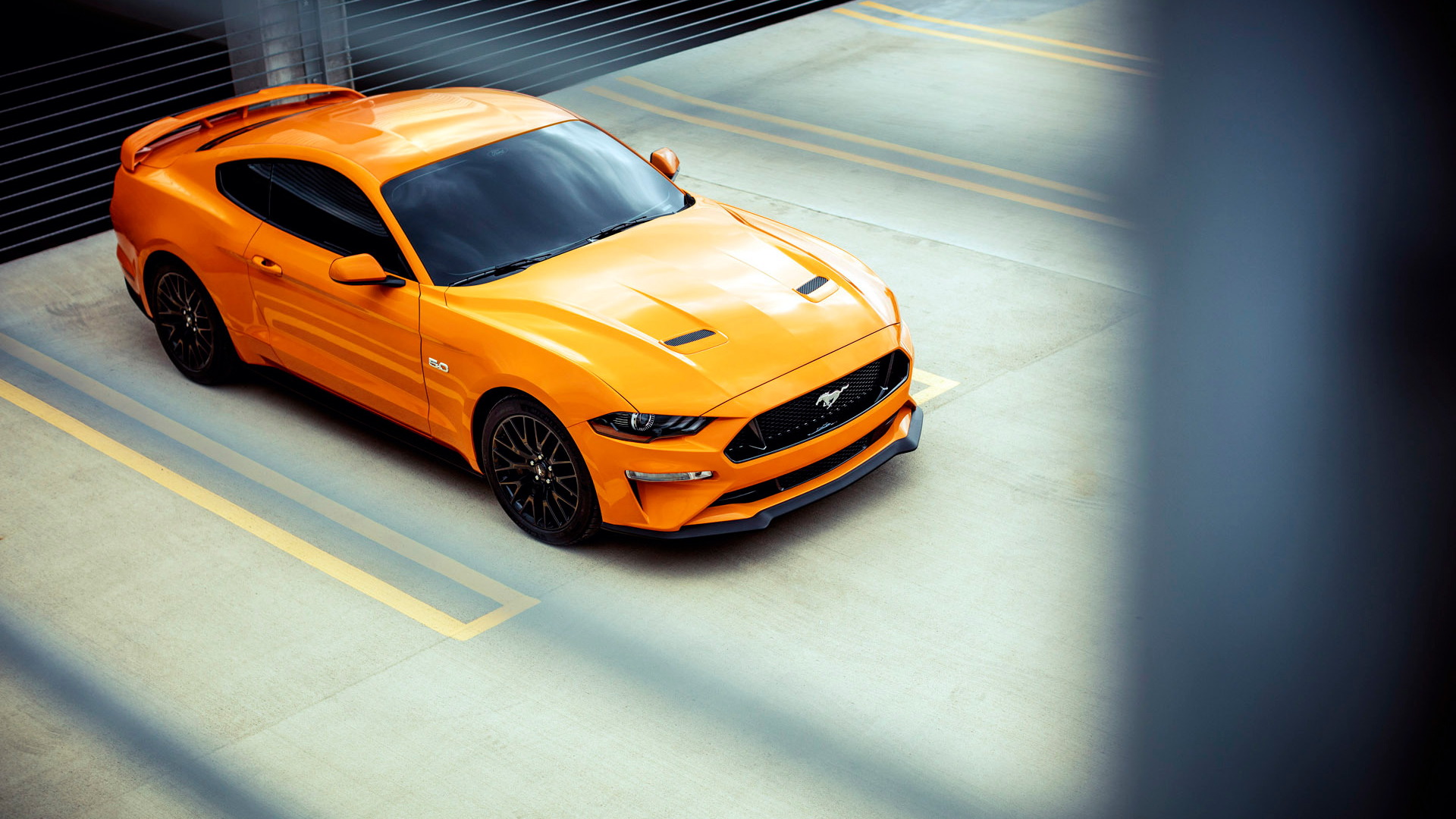 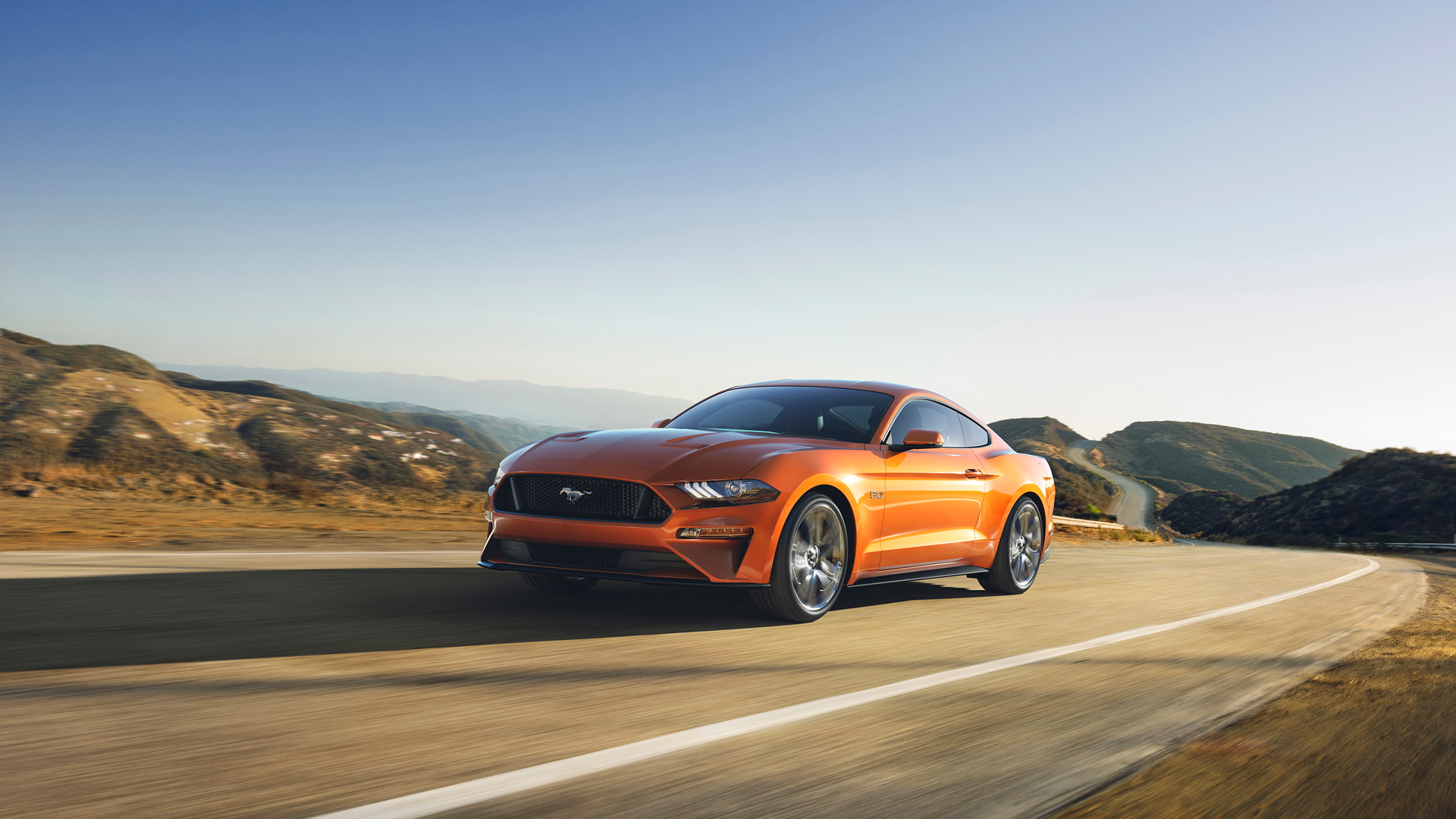 Ever since Chevrolet relaunched the Camaro, it’s effectively been poking Ford, almost trying to provoke its oldest rival with cars like the SS 1LE, Z/28, and ZL1. And Ford has spent the past several years politely asking Chevy to stop with a short string of competitors in the Boss 302, GT500, and most recently the GT350.

The 2018 Ford Mustang is what happens when the polite requests turn into a right hook.

Adopting some of the most successful elements from the high-performance Shelby GT350, the facelifted Mustang stares down its rival from downtown Detroit on the most even playing field in years.

Traditional facelifts usually consist of new headlights, new taillights, a freshened set of technology, and not much else. The 2018 Mustang has all of that, but a whole lot more. Ford's engineers started—as is so often the case with muscle cars—under the hood.

A new 2.3-liter turbocharged inline-4 in the Mustang EcoBoost benefits from lessons learned with the Focus RS, retaining last year's 310-horsepower rating while increasing torque from 320 to 350 pound-feet. The inline-4 feels more urgent and willing to work, which is usually the effect of dosing a car with 30 more torques. The 2018's power delivery is so much more aggressive and the engine so willing to rev that it’s easy to forget that this is the base Mustang's mill.

Blame part of that character on the new 10-speed automatic transmission, jointly developed between Ford and General Motors. The EcoBoost is the best match for this transmission. On a twisting, dynamic road and set to Sport+ with the Sport transmission setting, the 10-speed is a peach, holding gears to nearly the redline while rifling off quick upshifts and smooth downshifts. It's so good and so quick (and there are so many gears) that the paddle shifters on the back of the steering wheel feel like vestigial growths. Around town, the 10-speed is just at home with the EcoBoost, engaging quickly enough off the line and invisibly changing gears to keep the rpms low.

But the transmission falls to pieces when faced with more power. My first outing in the 2018 Mustang was behind the wheel of a GT with the 10-speed automatic and aside from a pre-dawn sprint to Point Dume Beach on day two of the program, I never touched it again. The 10-speed auto is recalcitrant in the V-8-powered Mustang GT, constantly unsure of which gear is right for the occasion. With 10 to choose from, at one point I saw the gear indicator go from seven to five to three after going from steady-state cruising to half throttle—what followed was an unnecessary and annoying surge from under the hood as the transmission suddenly called most of the Mustang's 460 hp to action. Manual mode didn't solve the problem, either. Unless I was caning the 5.0-liter V-8, the 10-speed just wasn’t willing to cooperate.

But it could be worse. After experiencing the difficult automatic in the GT, Ford confirmed that 60 percent of GT buyers continue to opt for the standard 6-speed manual, which I'm happy to report is a gem. The perfectly sized shift lever is close enough to the steering wheel, while its appropriately long throw hints at the Mustang's muscle-car roots. Drive aggressively and the throws are fine, with a precise-feeling gate at the end of the travel. While some of the media on my wave of the event complained of heavy damping in the clutch pedal, I found the new twin-disc clutch simple enough to operate with a broad catchpoint and linear travel.

Once underway, the 5.0-liter V-8 remains a lovable engine. The addition of direct injection and a higher compression ratio let Ford increase the GT's redline from 7,000 rpm to 7,500. That's as high as the old Boss 302's “official” max engine speed, but with more power and torque—it's a good time to be alive.

This engine feels fantastic at any engine speed. The throttle response, particularly in the aggressive Sport+ driving mode, feels supremely manageable, allowing the driver to strike the right balance between power and traction from a standstill—a new Drag Mode is available, as is launch control, in case the power is too much to handle. Under way, there's no discernible drop in output, straight on up to the 7,500-rpm redline. This is an addicting engine, and the official numbers aren't bad either.

Ford quoted me a sub 4.0-second sprint to 60 mph, although no amount of prodding or plying with The Macallan 12 could convince the PR people to give a more accurate number—assume a time between 3.90 and 3.99 seconds. Meanwhile, the GT is limited to 155 mph, although its V-8 sounds like it can go much faster thanks to the new $895 Active Valve Performance Exhaust.

Let me sing you the song of my people

You won't be able to see a difference in models with this affordable option—all 2018 Mustangs wear GT350-inspired quad exhaust tips—but you'll certainly be able to hear it. With four separate exhaust modes, owners can tailor the Mustang GT's sound to the setting. In the Normal mode, the 2018 Mustang GT sounds just like the 2017. Sport and Track amplify the volume considerably. This is a loud, booming, ever-present exhaust note that just begs to be exploited. But Quiet mode is the revelation.

Ford widely publicized the so-called Good Neighbor mode, which allows owners to start their Mustang GT's without the usual look-at-me bellow that accompanies the 5.0-liter V-8. Quiet mode has the same effect while underway, subduing the engine to what feels like the same cruising volume as, say, a V-8-powered F-150. It's perfect for a long, boring drive.

So yes, this new Mustang is quick. And it's arguably the least important thing about this facelift, because the 2018 Mustang is smarter and more agile.

The highlight of this brainier Mustang is its new 12.0-inch LCD instrument cluster. This reconfigurable display is not cheap. It's available on both the Ecoboost and GT, but requires the Premium Package—$5,015 for the inline-4 and an even $4,000 for the V-8—and the $2,200 Premium Plus Package. Sure, you get a bunch of other worthwhile goodies to soften the blow, but we're still talking about a feature that requires anywhere from $6,600 to $7,215 to acquire. But it's worth every penny.

Not only is this one of the most affordable all-digital instrument clusters on the market, and one of the first from a mainstream automaker, it's also one of the prettiest. The 12.0-inch screen is dedicated to performance. This isn't like the Audi Virtual Cockpit—there's no map display and the radio information is surprisingly limited. Instead, it's all about performance data and trip computer info.

There are three different tachometer layouts—one for Normal, Sport, and Track driving—although owners that have a preference can lock that in. I liked the traditional look of the Normal mode, although the horizontal tachometer in Track Mode is neat too. With a preferred look, the next step is setting up the shift notifications. There are three different visual styles to choose from, including race-style shift lights, and the ability to adjust the rpm the lights fire off at, extending all the way to redline. Ford's TrackApps operate through the large display, while owners can view the same vehicle data—I can't survive without knowing my inlet air temperature—and adjust their exhaust setting and set the MyMode driving mode. It's a stylish, beautifully executed system.

The Mustang's new magnetic dampers are its other must-have option. Yet another item derived from the Shelby GT350, this suspension arrangement is responsible for the most agile mainstream Mustang ever. In the Ecoboost, the magnetic dampers allow rapid directional changes and a composed, flat cornering character that isn't influenced by mid-corner imperfections. The body motions are tighter and more controlled than ever before—on a twisty road, the Ecoboost Mustang with its magnetic dampers feels like a legitimate alternative to lightweight sports cars, including even the Toyota 86. The dampers' impact isn't as great on the heavier Mustang GT, but it's still a shocking (excuse the pun) improvement, delivering similar handling improvements.

Naturally, the dampers are adjustable, with the softer settings helping the Mustang handle what little bumps and potholes the Pacific Coast Highway could throw at it during our test. We'll wait until we can test the enhanced Mustang suspension on Michigan's pock-marked roads before rendering a verdict on how comfortable it is.

The 2018 Mustang is only a facelift, but it's a huge step forward not only in a vacuum, but compared to its main rival. The Chevrolet Camaro is no longer the default, affordable choice for an all-American sports/muscle car. The Mustang levels the playing field not only with performance hardware (I'm looking at you MagneRide), but with one of the neatest digital instrument clusters on the market, a punchier, lighter turbocharged offering, and a V-8 model that revs to the moon and back. The 2018 Mustang isn't just an alternative to the Camaro, it might just be a more complete all-around vehicle.