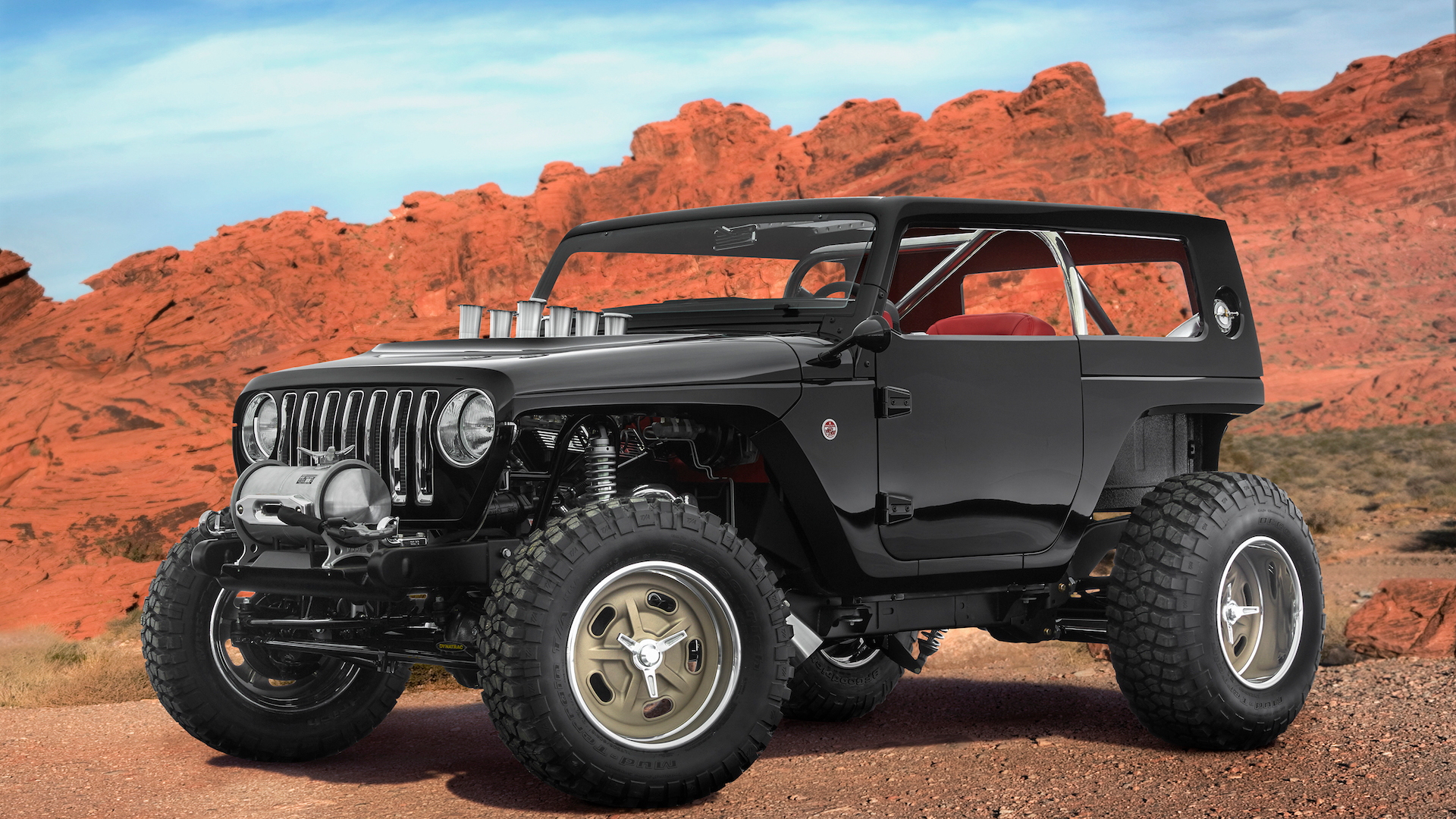 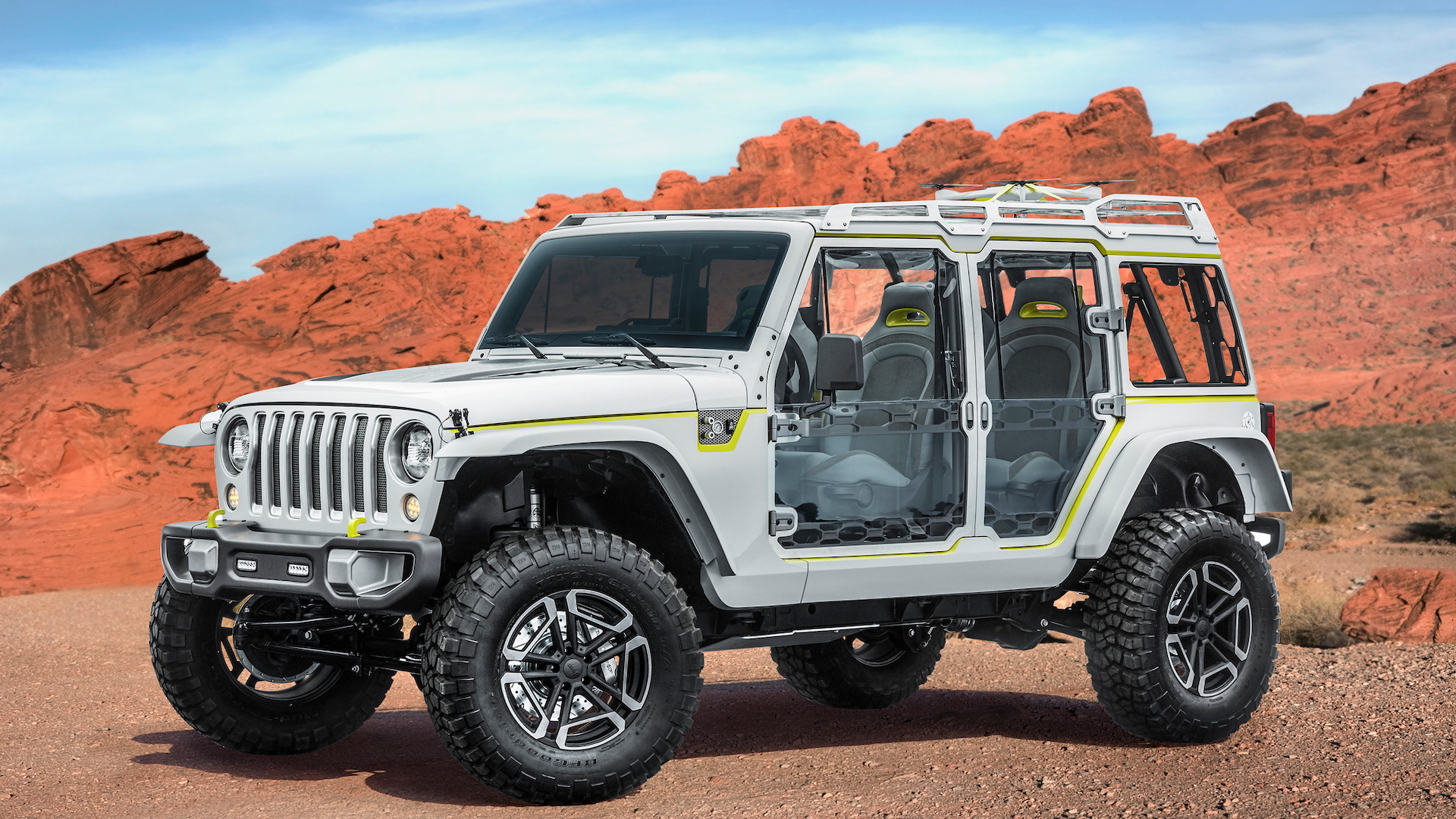 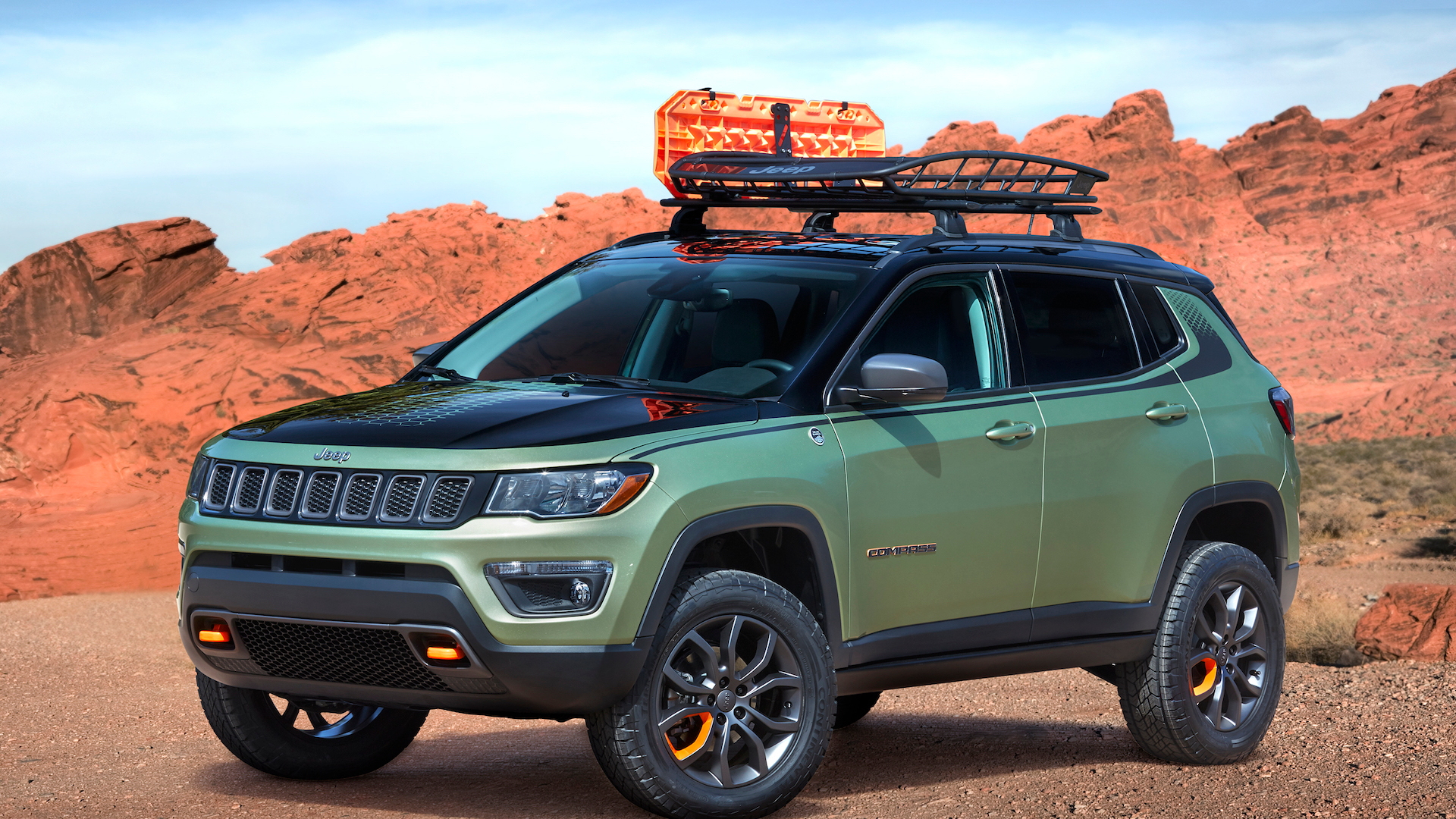 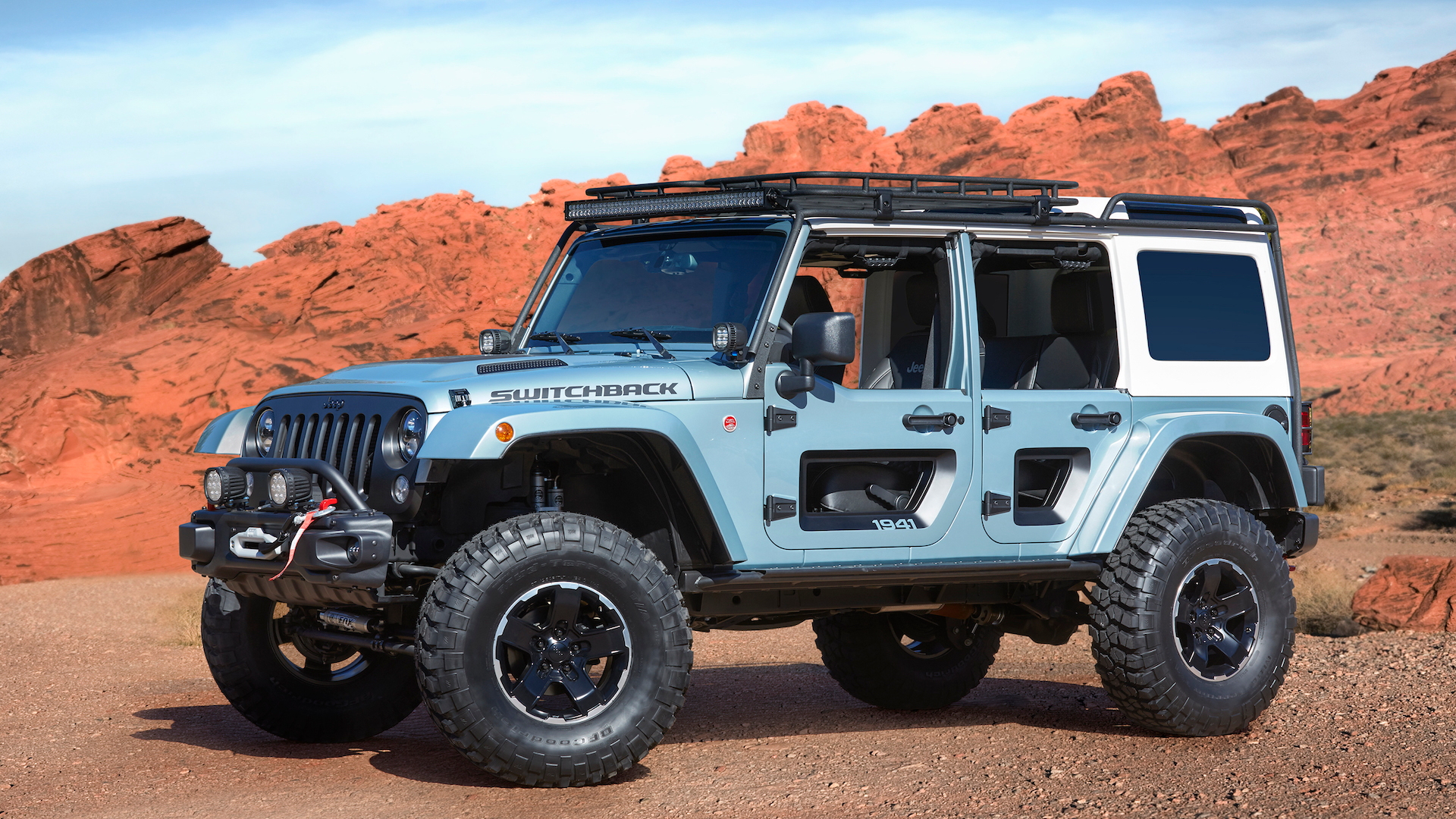 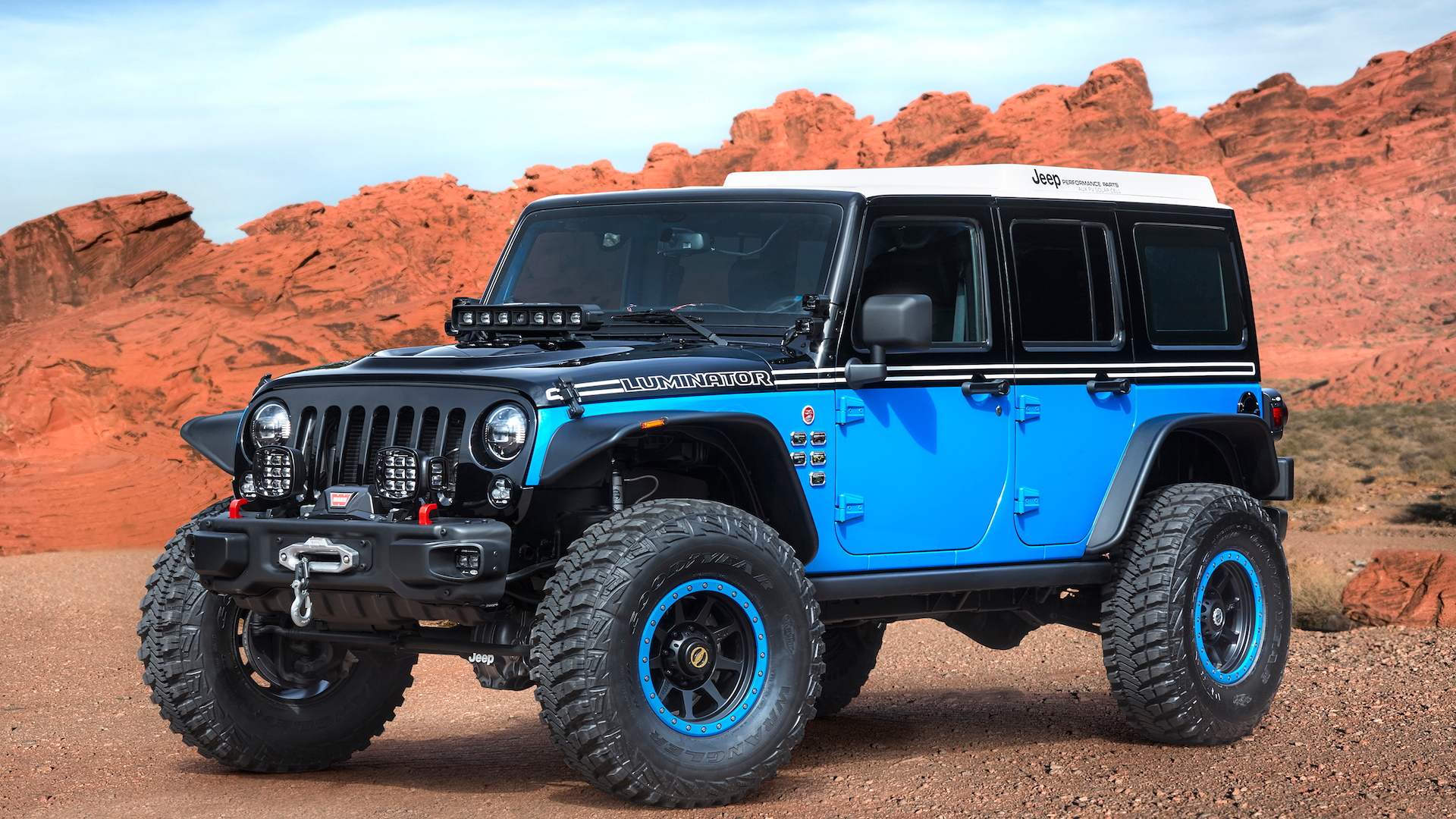 It’s nearly time for Jeep’s annual Easter Safari in Moab, Utah, and that means we’ve been graced with some seriously cool concept vehicles. Jeep has whetted its enthusiasts’ appetites with 7 concept vehicles to celebrate the Easter Safari, and each sports unique capability and designs to take Moab’s trails by storm.

The coolest part? Jeep went all-out retro and kept features such as the original car phone. You can also spy a Nintendo Gameboy in the backseat, too.

The Wrangler-based Jeep Safari concept is all about catering to backseat passengers while exploring the unbeaten path. Jeep outfitted the Safari concept with a translucent hard-top roof panel to ensure the best views for those sitting behind the driver. The doors, which Jeep calls “windoors”, are hinged to allow easy access into the vehicle and even feature a zipper opening to let the great outdoors in.

The Safari concept won’t be giving passengers much of a view if it’s not capable. Thankfully, it should do just fine. A Dana 44 axle, equipped with selectable differential lockers sits under the Safari's skin, while the body rides atop 35-inch BFGoodrich mud-terrain KM2 tires. Power comes from the tried and true 3.6-liter Pentastar V-6 engine, while Jeep selected a five-speed automatic transmission to distribute the power.

Moving right along, we come to the Jeep Quicksand. It has a completely different take on Jeep’s lineage of off-roading: it’s all about the sand. Powered by a 392 Hemi crate engine with eight-stack injection and mated to a six-speed manual gearbox, the Quicksand will do just as the name implies. That is, getting you across the sand quickly.

The Quicksand also embodies a bit of old school hot rodding, too, with its chopped hardtop and windshield. The hood even sports open headers through a cutout in a game of Hemi-sponsored peekaboo.

However, despite it’s performance and sand dunning cues, this Jeep remains ready for any terrain. It features 32-inch BFGoodrich mud-terrain KM2 tires up front, and 37-inch tires in the rear with coilover shocks.

The all-new Jeep Compass finds some Moab-inspired love with the Trailpass concept, which takes the Trailhawk and kicks it up another notch. With a 1.5-inch lift kit and Continental TerrainContact tires, the Trailpass makes its case as a less extreme, but still capable, Moab concept.

For a few other minor touches, Jeep applied a custom hood graphic, roof basket, rock rails, side stripes, and tinted head and tail lamps, too. All of it strikes a simple, yet well-stated look against the green exterior hue and orange tow hooks.

With a bushel of Mopar and Jeep performance parts, the Switchback concept is supposed to represent the “ultimate in off-road performance.” A front and rear Dana 44 axle, four-inch lift with reservoir Fox shocks, and heavy-duty differential covers certainly make the case for Jeep’s statement. Like the other concepts, BFGoodrich mud-terrain KM2 tires can be found at each corner of the concept, measuring 37 inches.

If the Jeep CJ66 concept looks familiar, it’s because Jeep debuted this particular creation at the 2016 SEMA Show. Nonetheless, it’s still one beast of a creation. The frame is from a Wrangler TJ, while the body is all Wrangler CJ. Modern Wrangler JK elements and power from a 345 Hemi crate engine create Jeep’s very own resto-mod.

The Jeep Luminator concept is all about producing illumination, as the name suggests. Jeep jointly developed the lighting features found on the Luminator with Magneti Marelli, which can be found on nearly every portion of the concept vehicle.

The most innovative lighting feature is the Luminator’s scanning LED light bar, which features active spot and dynamic following tech. At the rear, a center high-mount stop light also provides a scouting and trail lamp with four different colored LEDs. Red will illuminate when stopped, amber at 1-3 mph, green at 3-25 mph, or flood lighting can be activated, which shines white. There’s even a roof-mounted solar panel to power an inverter with a landing pad for drones.

Each concept will make its debut in the flesh on April 8, 2017, on Moab’s famous trails.