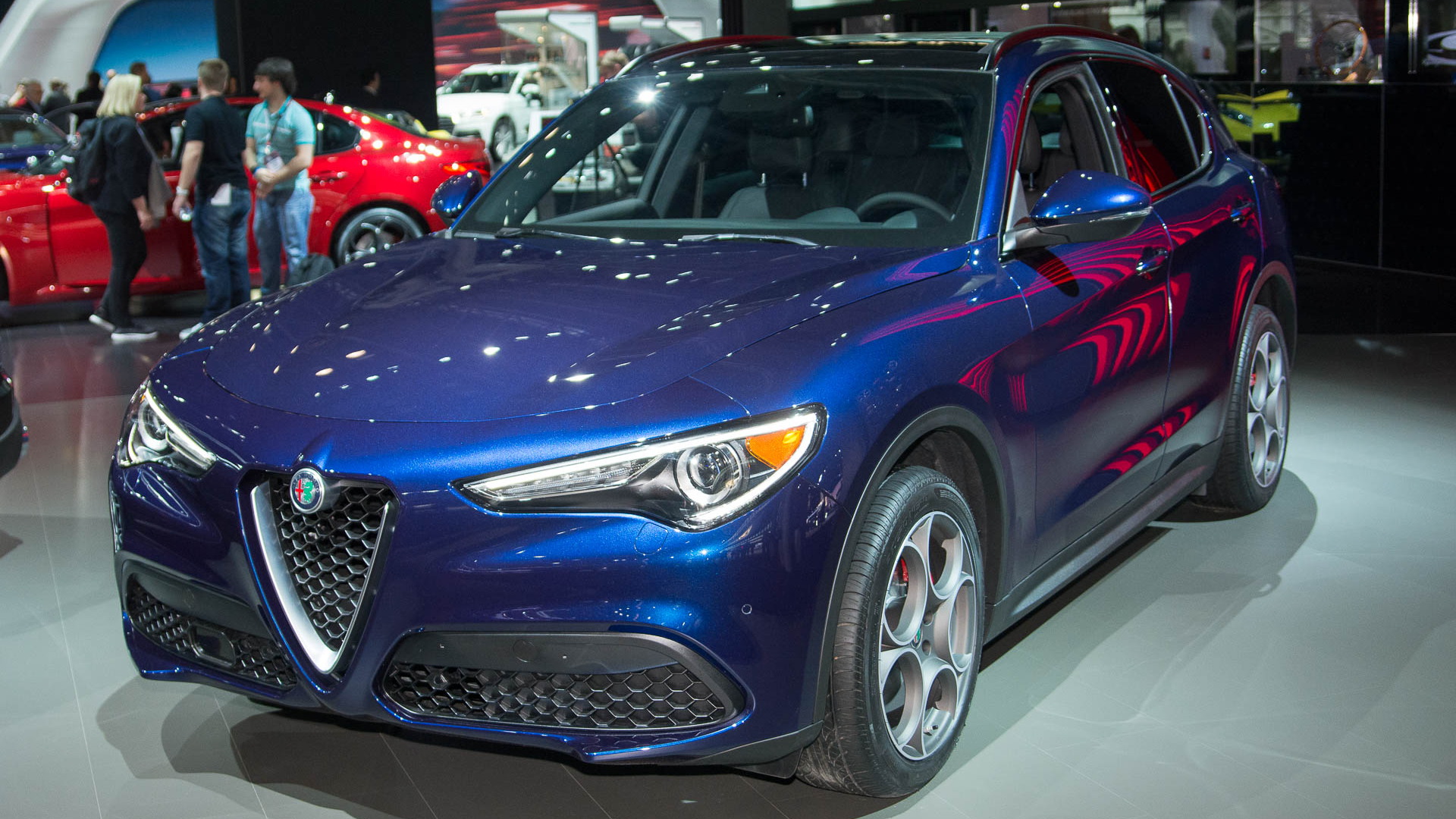 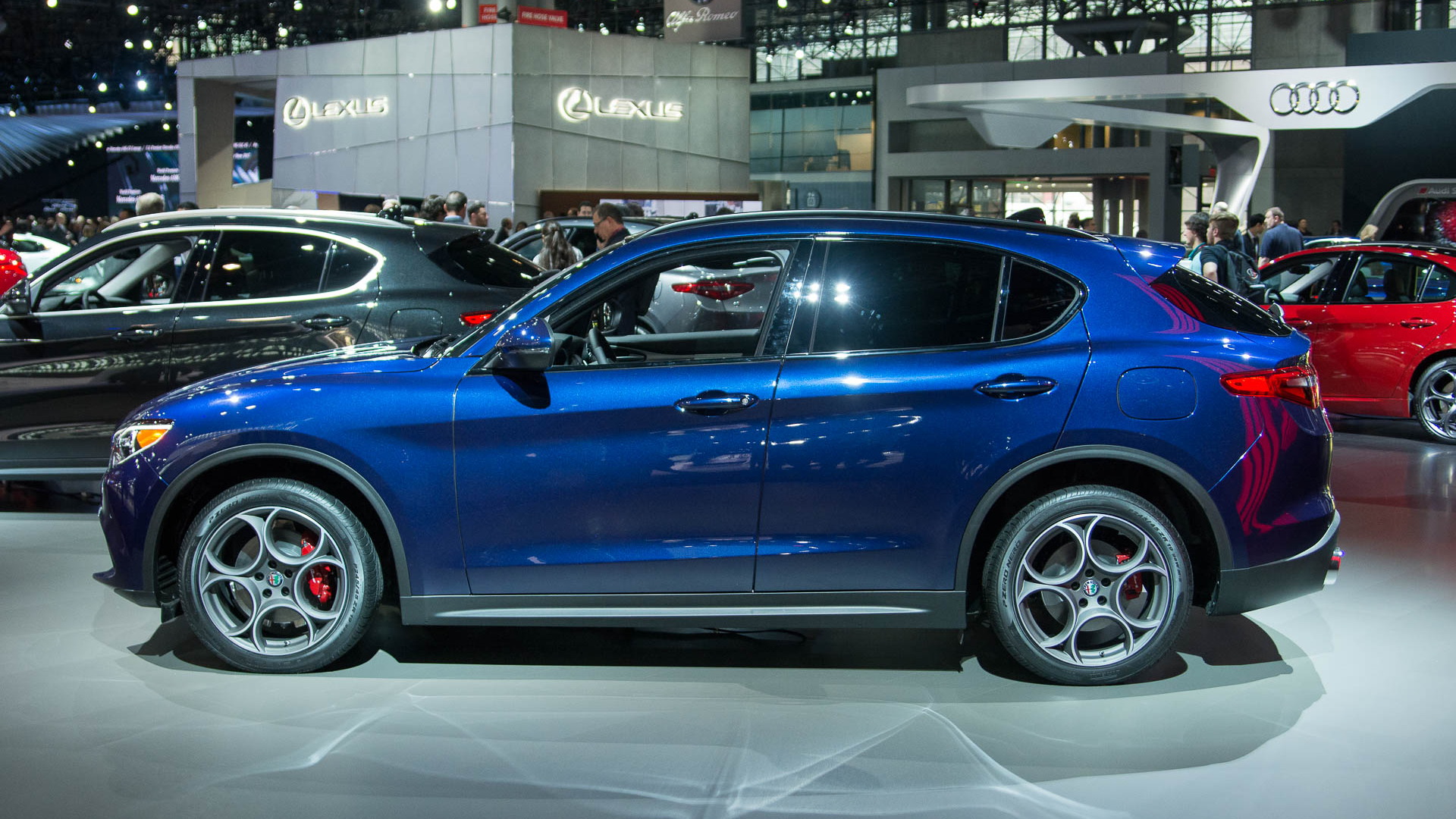 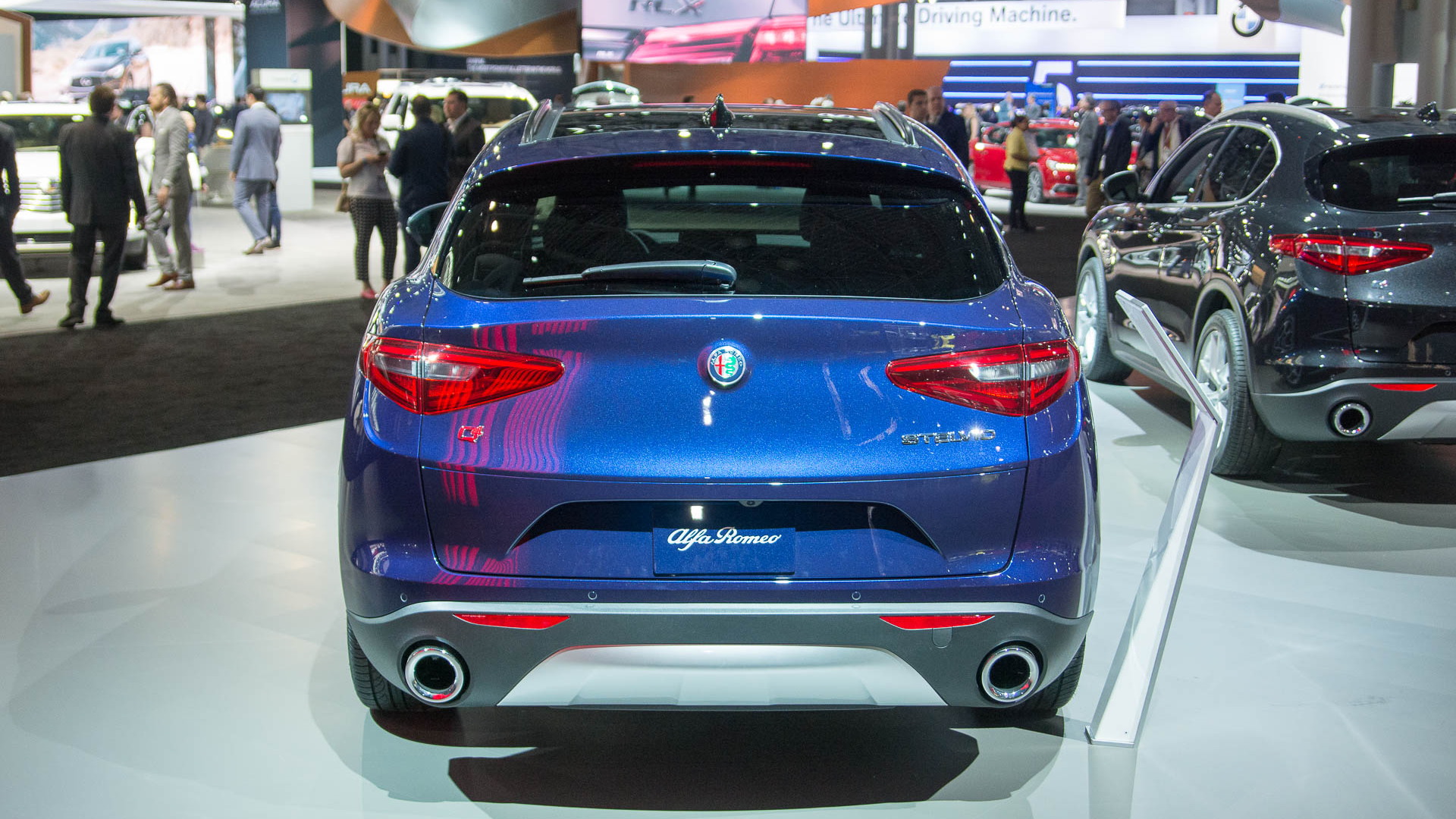 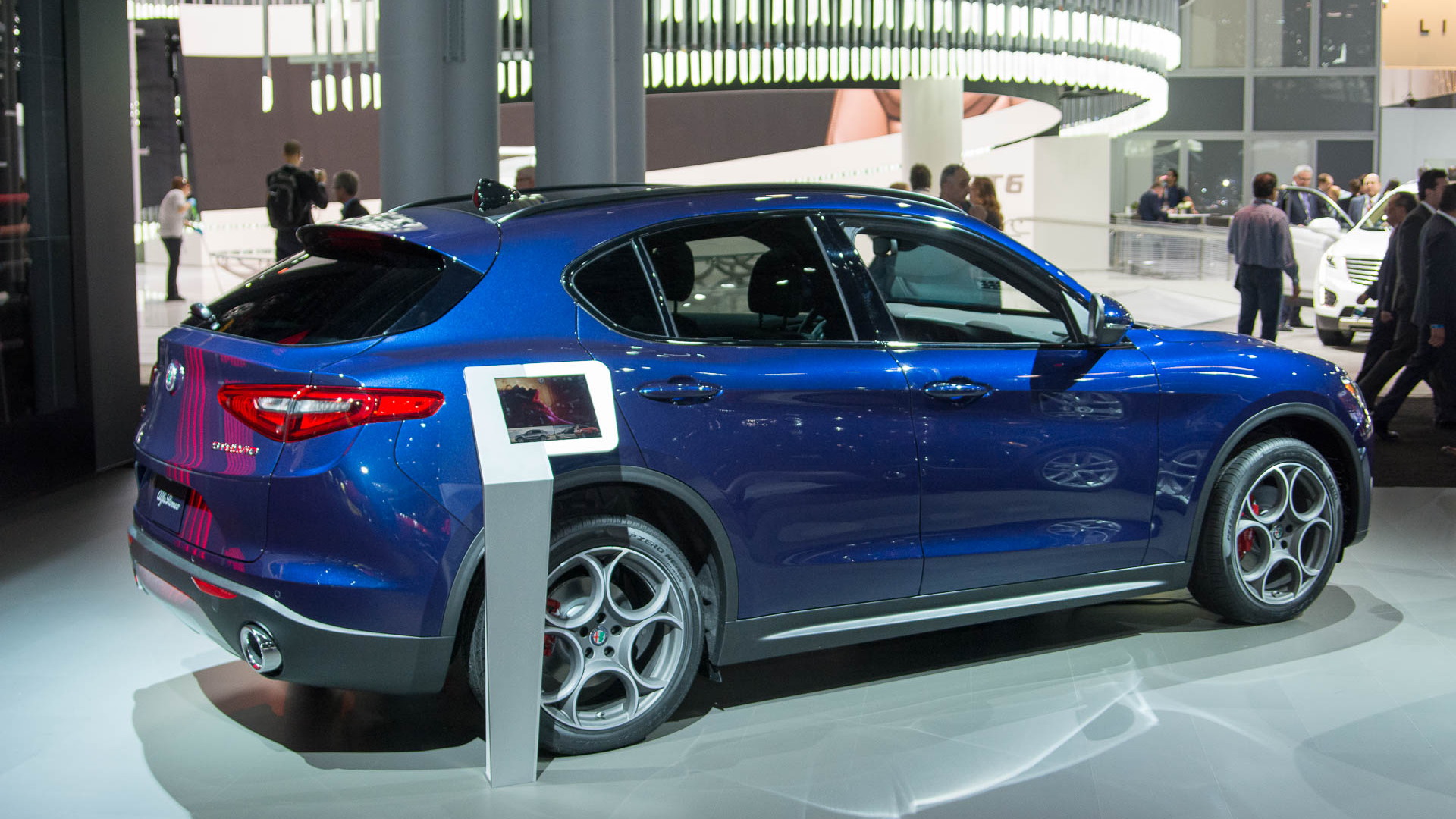 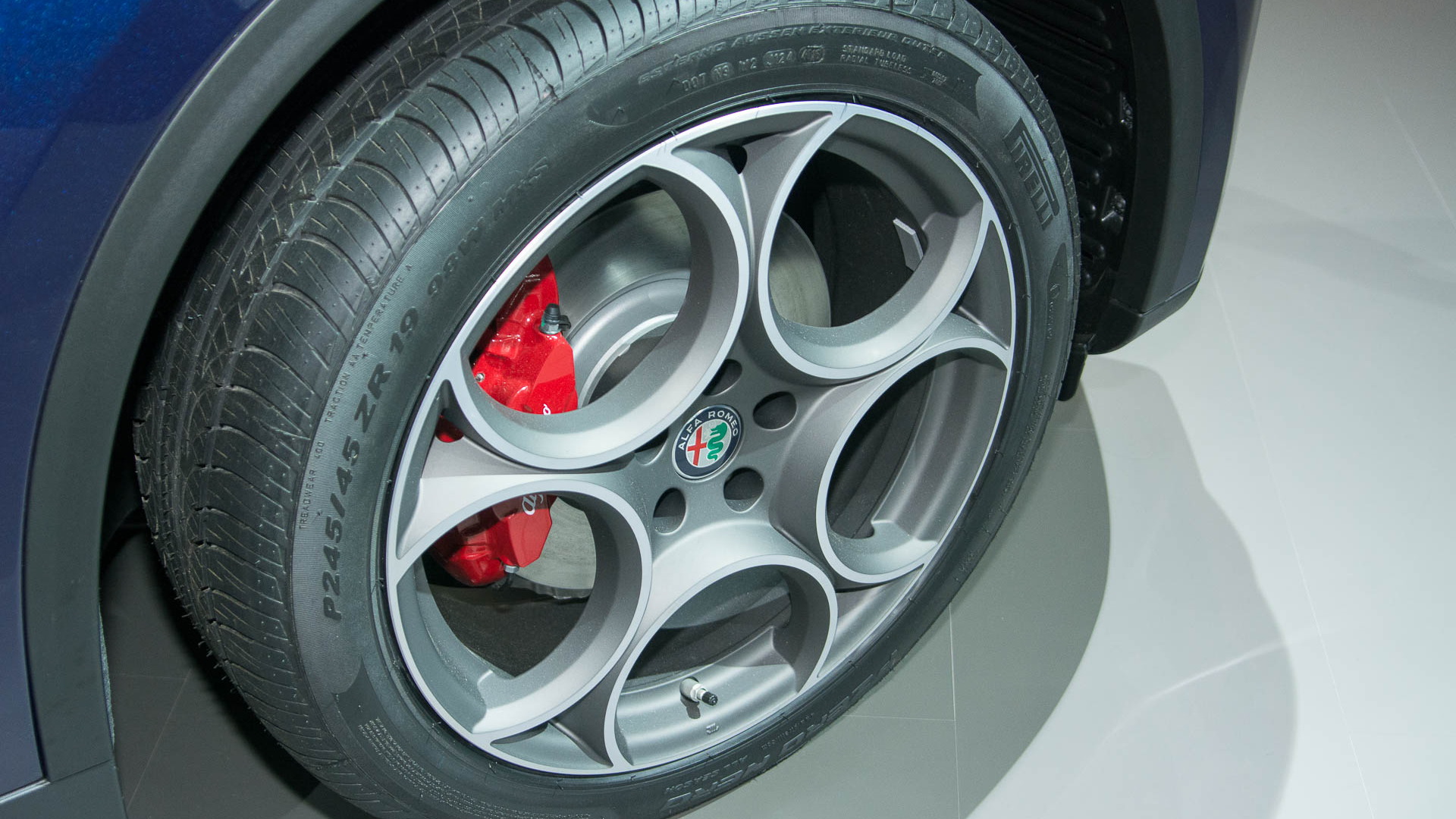 Alfa Romeo’s Stelvio, the Italian marque’s first-ever SUV, was shown to the world last fall at the 2016 Los Angeles auto show. But the vehicle on display in L.A. was the Stelvio Quadrifoglio, the 505-horsepower monster that will only make up a small percentage of Stelvio sales.

Alfa Romeo has since revealed the bread-and-butter model, and we’re glad to report that losing the big wheels and more pronounced bumpers of the Quadrifoglio hasn’t hurt the vehicle's looks in any significant way.

Like it’s doing with the Giulia, Alfa Romeo will offer the Stelvio in base and better-equipped Ti (Turismo Internazionale) guises. Each will come with an 8-speed automatic transmission and turbocharged 2.0-liter inline-4 delivering 280 horsepower and 306 pound-feet of torque.

Upgrading to the Quadrifoglio will get you a twin-turbocharged 2.9-liter V-6 with the aforementioned 505 hp plus 443 lb-ft of torque (it's the same engine found in the Giulia Quadrifoglio). It also comes standard with an 8-speed automatic. The shifter has aluminum paddles and can shift gears in less than 100 milliseconds.

Alfa Romeo has confirmed that all-wheel drive will feature as standard across the range. The system features an active transfer case and front differential that allow the drive torque to be managed to suit a given situation. It normally routes all of the drive torque to the rear wheels, but as the wheels approach their grip limit up to 60 percent of the torque can be instantly directed to the front pair. Alfa Romeo quotes a 0-60 mph time of 5.4 seconds for the Stelvio and Stelvio Ti, which compares to the 3.9 seconds that the Quadrifoglio requires to achieve the same feat.

The Stelvio is well-equipped, even in base guise. Among the standard goodies are 18-inch aluminum wheels, a carbon fiber driveshaft, leather trim, parking sensors, a rearview camera, a driving modes selector, and a flat-bottomed steering wheel with an integrated engine starter button.

The Stelvio Ti adds 19-inch wheels as standard plus a larger 8.8-inch infotainment display, heated front seats and steering wheel, and wood trim. The Stelvio Ti can also be ordered in Sport or Lusso packages that add numerous extras.

Alfa Romeo presented the Stelvio and Stelvio Ti on Wednesday at the 2017 New York auto show. Sales start in mid-2017, with the vehicles arriving as 2018 models. Rivals include the BMW X3, Mercedes-Benz GLC and Porsche Macan. Pricing starts at $42,990.

Production will be handled at Fiat Chrysler Automobiles’ Cassino plant in Frosinone, Italy.

For more on the Alfa Romeo Stelvio, read the in-depth reviews at The Car Connection.