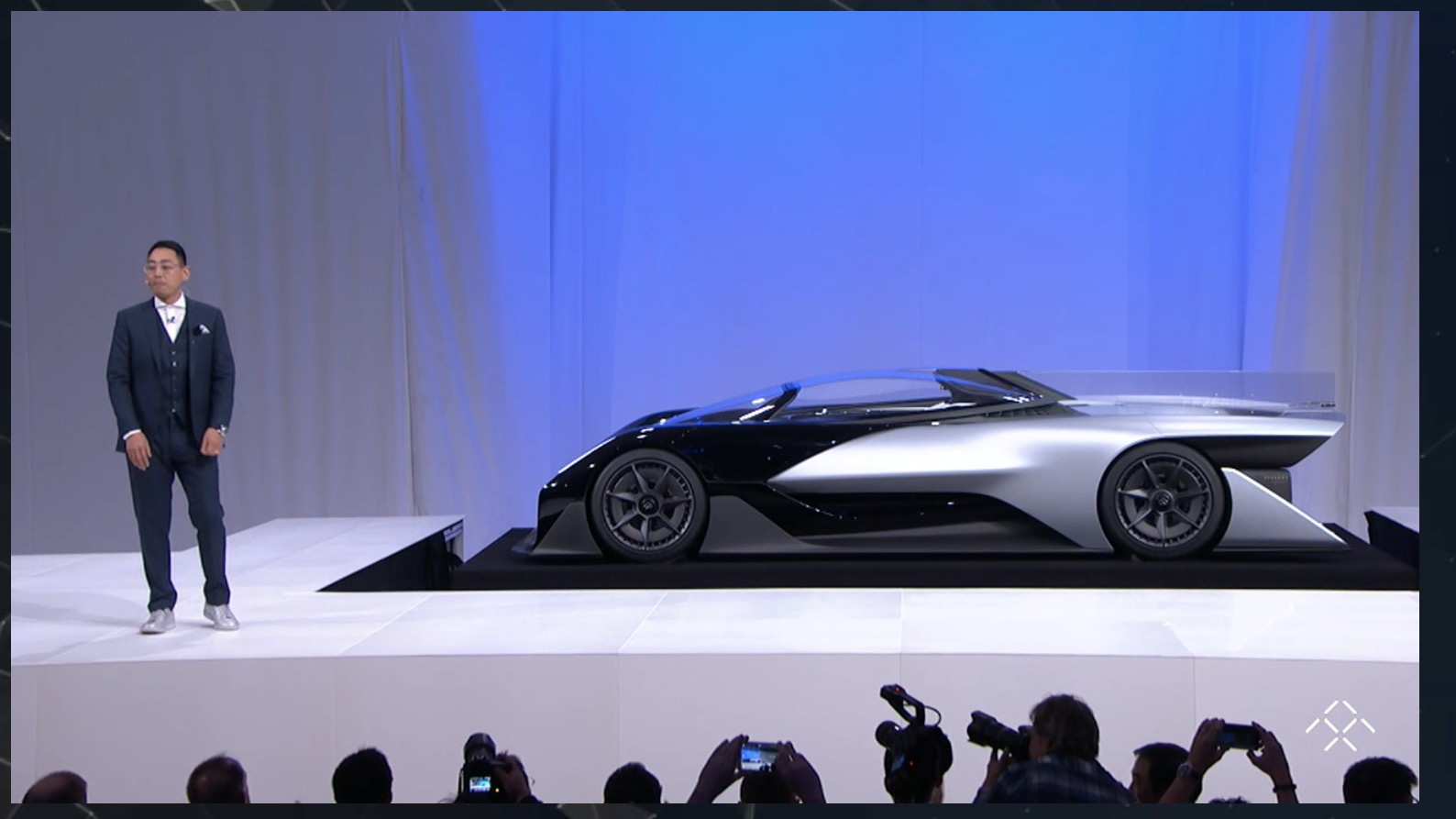 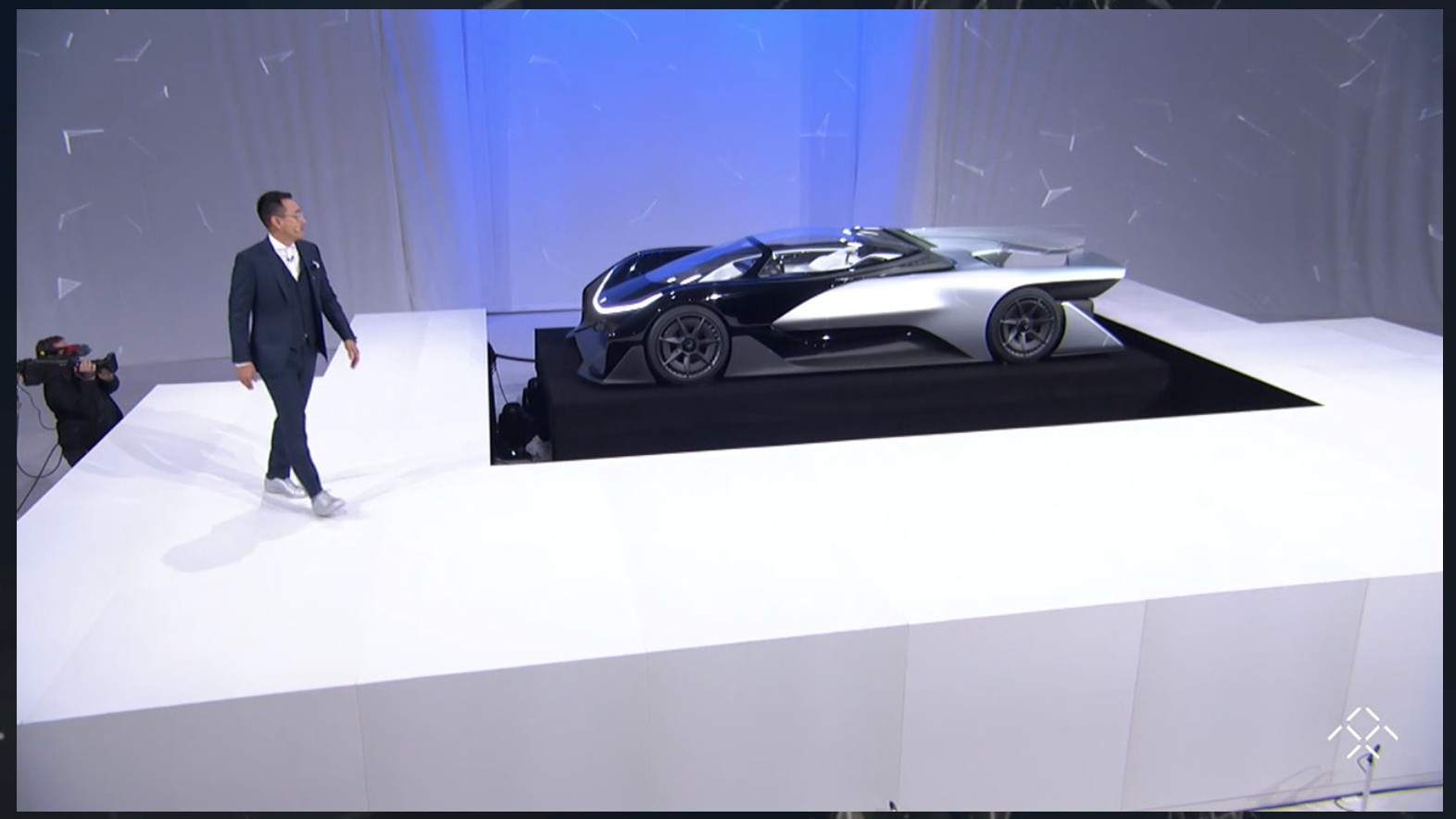 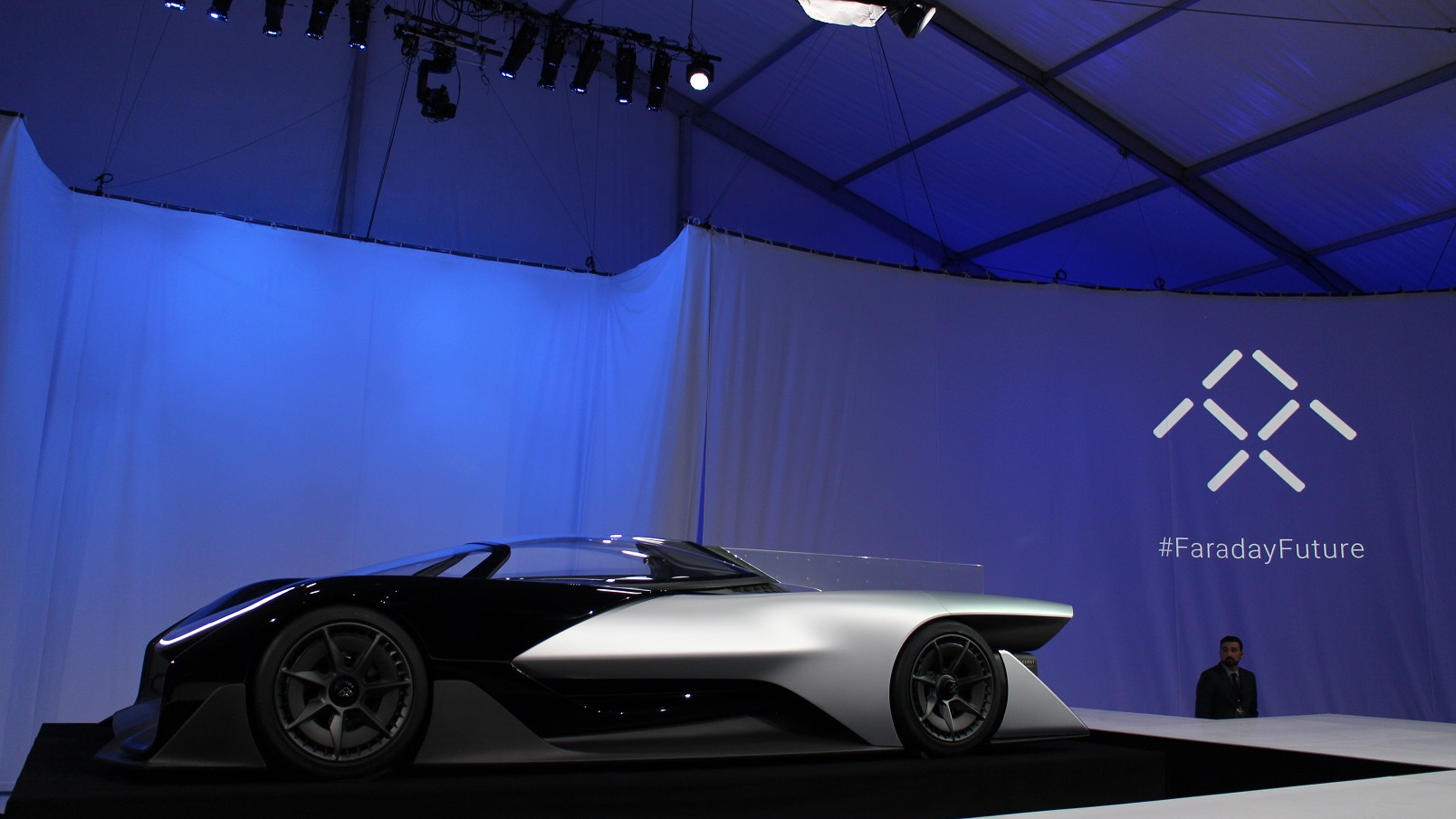 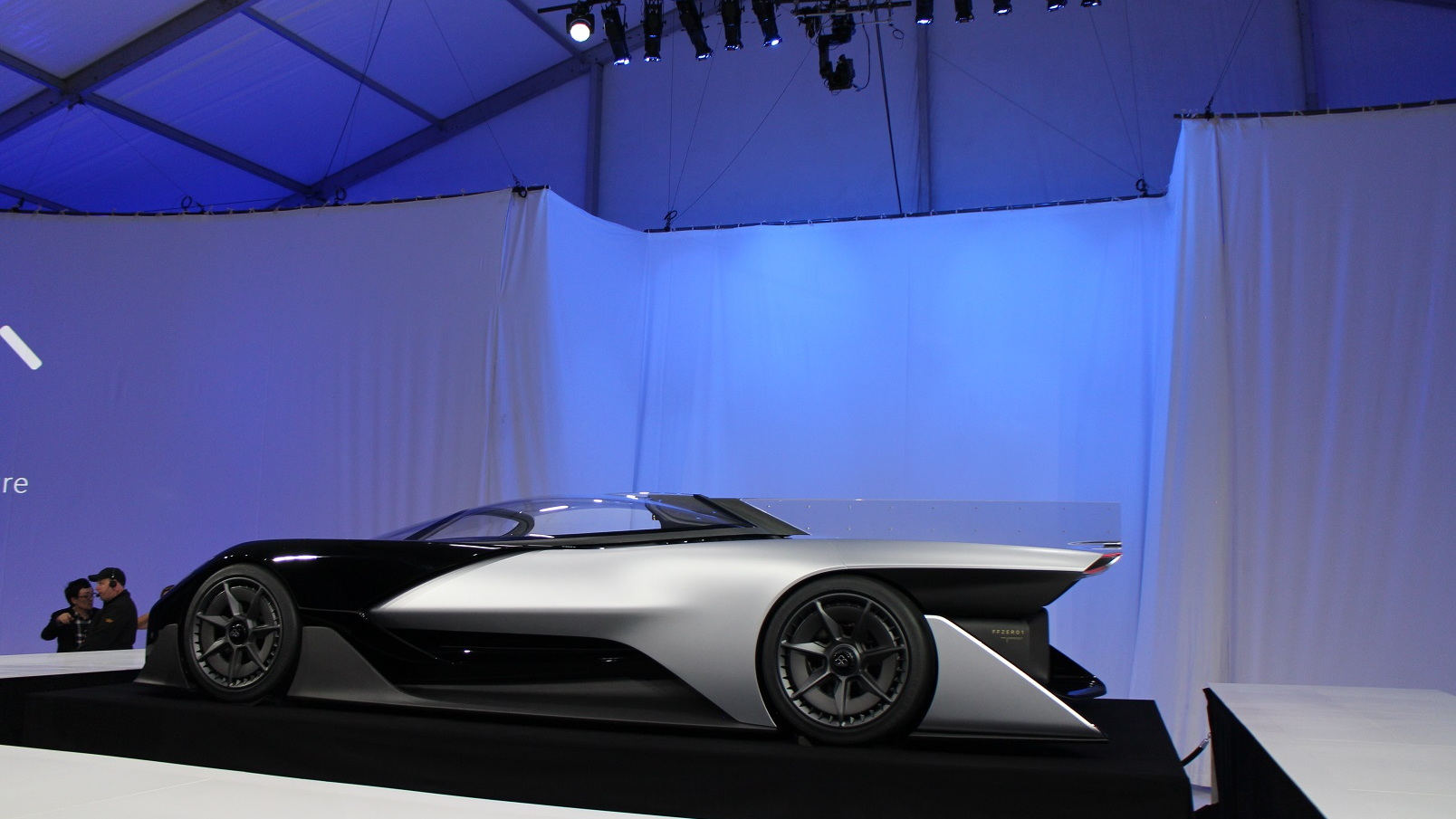 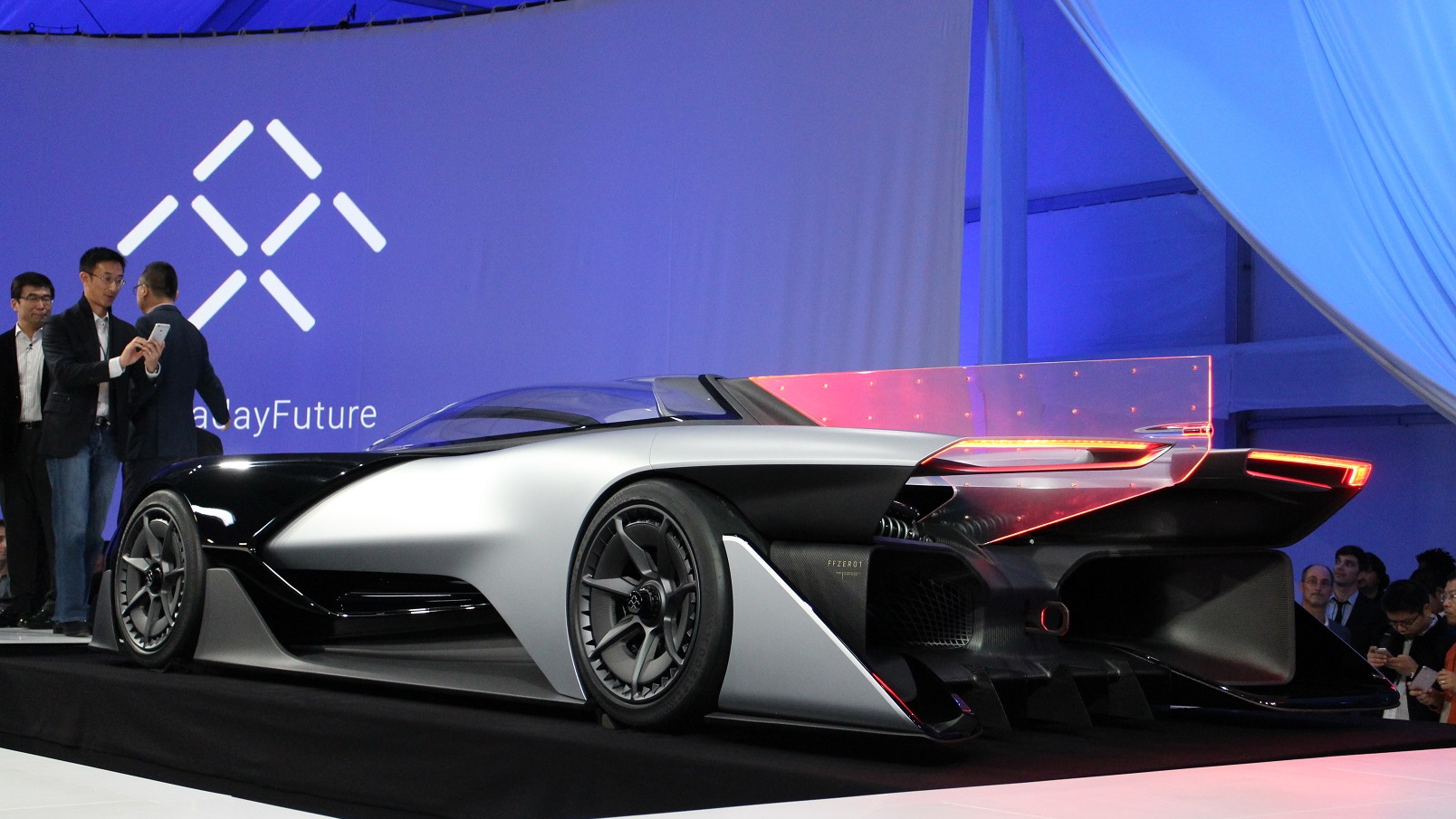 Faraday Future—the Southern California electric automaker that's backed by billions of dollars of Chinese money and has been working in stealth mode for the past 18 months—has just unveiled the FFZERO1 Concept at the 2016 Consumer Electronics Show in Las Vegas.

Yes, the earlier leak was correct. It is indeed an electric race car with over 1,000 (theoretical) horsepower, a top speed of (theoretically) over 200 mph, and a zero to 60 mph time of under three seconds. Of course, this is all conjecture since this concept car doesn't move and those numbers represent what a car like this could do.

A brief overview of the FFZERO1 Concept reveals an extreme race-car like body with aero tunnels that channel air directly through the vehicle. These tunnels reduce drag and therefore power consumption and help cool the electric powertrain. While the lines are those of a slick, low-slung race car, Faraday Future says the UFO character line that runs around the vehicle is a signature design element in that will be on all future products.

Inside the FFZERO1 Concept features an all-white single-seat cockpit that Faraday Future admits would be completely impractical in a production car. However, Faraday chose to go with it because it fits with a pure race car. The seat design is based on the NASA-researched zero gravity seating position that Nissan also uses. Front and center is a steering wheel that includes a dock for a smartphone and a drive-by-wire asymmetrical instrument panel that previews a piece of forthcoming Faraday Future design DNA.

Before you let disappointment sink in, realize that as it turns out, this concept reveal wasn't truly the star of Faraday Future's press conference. Far from it. Tonight was the first time we really received a look under the hood of this new automaker, and we learned a lot.

Faraday's already told us it's chosen Nevada—just like Tesla, that scrappy Silicon Valley electric car start-up—to build its factory, and it's breaking ground in the next few weeks on a three-million square-foot facility. We also had heard the company would deliver its first production vehicle in 2017. That's a mere year or two away (depending on when it delivers, but our money would be near the end of 2017, making it two years out).

What we didn't know, and learned this evening, is that Faraday Future already has 750 employees globally. Approximately 550 of those employees are in the U.S. while the other 200 or so are located around the world. Among those are employees from such high-profile outfits as Google, Apple, NASA, BMW, Jaguar, Tesla, and even the National Highway Traffic Safety Administration.

The common goal of these employees and Faraday Future? To re-imagine and re-define a concept for mobility.

According to Faraday, there are four key things that set it apart from other traditional automakers, and even Tesla:

It's an amazing team

Those 750-plus employees globally are a key differentiation point. Their backgrounds, their perspectives, their experiences—all these things set this team apart, we are told.

Faraday wants to design vehicles that respect and enhance the environment, connect the larger world, and build a business the creates a new type of ownership. It isn't focused on selling cars, but rather connecting as many users around the world as possible, all while offering vehicles that are reliable and safe.

Faraday's already aligned itself with leading companies around the world. It's partnered with the state of Nevada and LETV, the Netflix of China.

In 18 months, Faraday's assembled its team, selected a site for its production factory, is nearly ready to break ground on said facility, and set up major alliances. What's more, it's designing its vehicles using virtual reality. Perhaps most impressive is its modular vehicle architecture.

And that leads us to the most illuminating and exciting piece of information we learned today: Faraday Future's Variable Architecture Platform (VPA). Yes, many automakers have or are introducing modular platforms, but Faraday Future's seems fairly well thought out and quite flexible. We are told it's tailor-made for electric vehicles, and allows for single, dual, triple, or, with some modification, quad motor setups. It can accommodate front-, rear-, or all-wheel drive, and the power outputs can vary. It can also be used for anything from a luxury sedan to a crossover to a compact car to even a pickup. This is all powered by a battery pack design that essentially acts like a Hershey Bar; it's fully modular and can have cells added or removed depending on the vehicle size or length.

This platform is what all Faraday Future's vehicles will be based on, and yes, the FFZERO1 Concept uses it, albeit in an pretty extreme form. A form that could possibly—though let's not hold our breath—see limited production at some point in the future.

While the FFZERO1 Concept isn't the concept car we thought Faraday Future would show, it certainly looks cool, even if it's nothing but a rolling buck. However, we learned a lot from the press conference, and everything Faraday Future has talked about since the beginning seems possible. It sounds like Faraday Future envisions a future in which you order a self-driving electric car, it arrives, drives you to your destination, and then leaves you to go ferry someone else.

The future might not be vehicle ownership, but rather a collaborative, ride sharing automotive utopia. Are you ready? Faraday Future seems to be.