In a story on mercedes-benz.com, Mercedes-Benz revealed today that the 2017 E-Class will have an autonomous driving feature called Drive Pilot that will make it the most advanced autonomous driving vehicle in the brand's portfolio.

The story follows Michael Kelz, chief engineer for the E-Class, CLS-Class and GLC-Class, as he drives from Las Vegas to Los Angeles in an E-Class prototype. It says that Drive Pilot allows the car to drive almost completely by itself. The driver can take his/her hands off the wheel, and the car will take full control of the braking, accelerating, and steering.

In fact, the story says that if it weren't currently illegal to do so, the driver could use the time with his/her hands off the wheel to catch up on emails. In the future it will be possible to adapt the driver assistance system to the local regulations.

Various anecdotes in the story highlight different capabilities of Drive Pilot. For instance, it will give the car the ability to complete an autonomous passing maneuver, including performing the steering and acceleration. The driver will only have to tap an indicator. The car will also park itself remotely. In other words, the driver won't have to be in the car to allow the car to park itself. 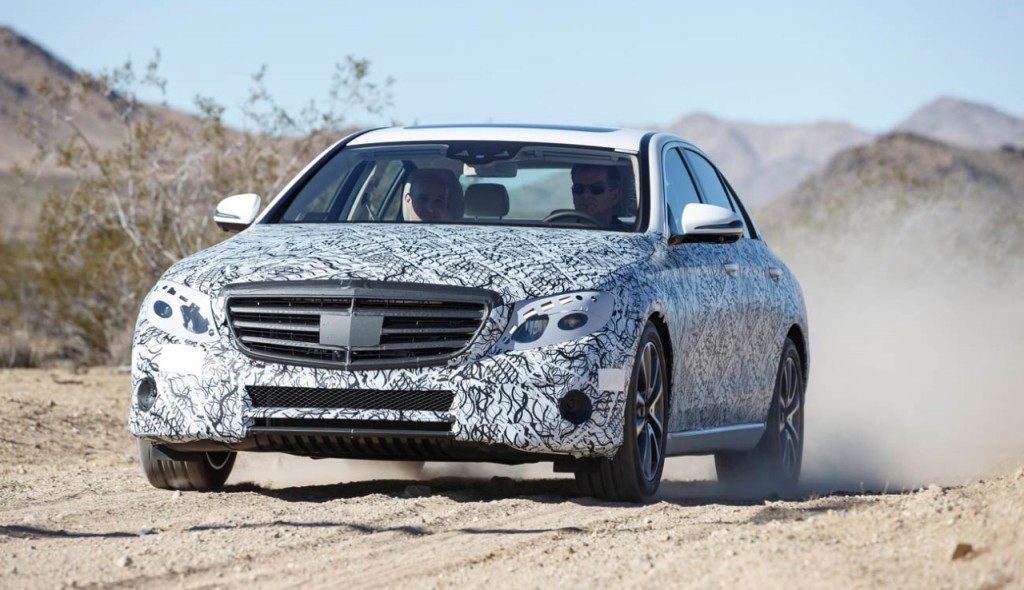 In the city, the E-Class will brake for pedestrians or crossing traffic, and an Evasive Steering Assist feature will help avoid a collision once the driver begins the steering input. There is no more explanation of how it works, but we can hazard a guess. Like brake assist applies full braking power when the driver begins to hit the brakes when an imminent collision is detected, once the driver begins steering, Evasive Steering Assist will move the steering wheel, possibly using the car's radar and cameras to find the safest direction to go while avoiding the accident.

Finally, the next E-Class will offer car-to-X communication, allowing it to inform other cars of danger spots, accidents, and traffic backups. This will be enabled by a central Daimler server, and only other Mercedes models will be able to tap into it initially. However, other vehicles with the capability will be brought on board over time.

The story offers two other tidbits about the 2017 E-Class. First, it will offer multi-beam LED headlamps, and second it will be up to 154 pounds lighter than the outgoing car.

The 2017 Mercedes-Benz E-Class will be unveiled on January 11 at the Detroit Auto Show. Check out our dedicated hub for more information on it and other announcements.