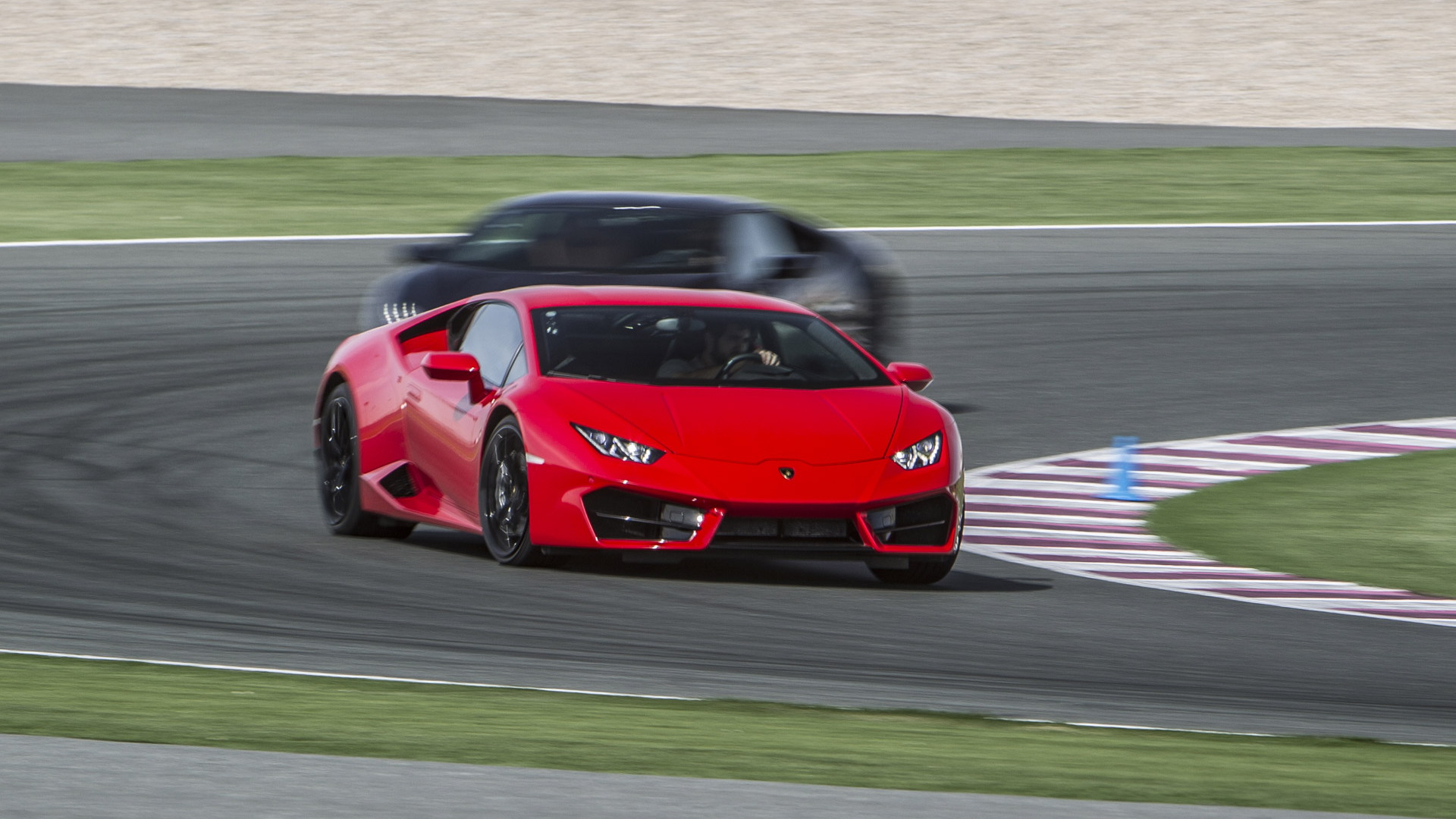 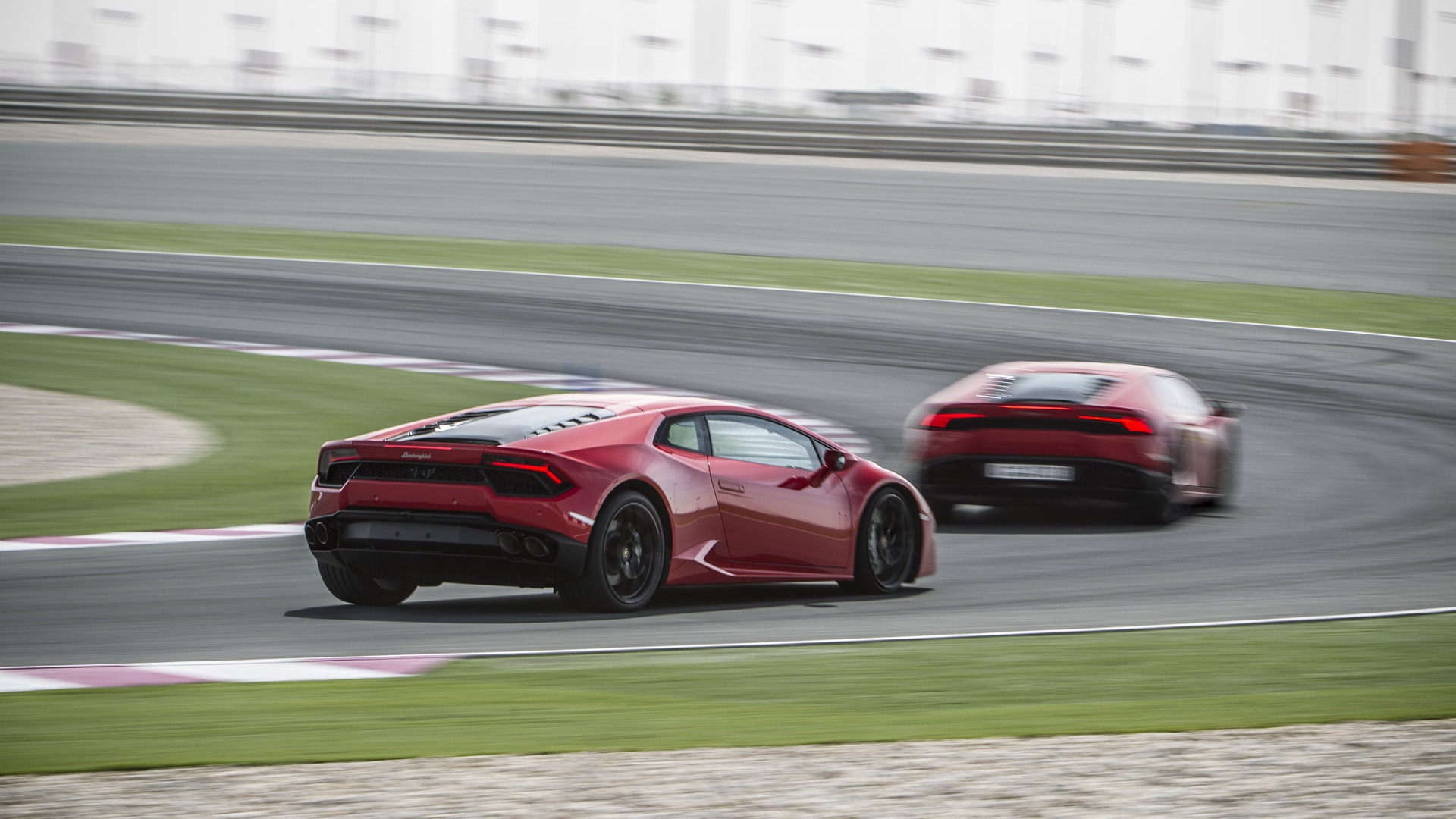 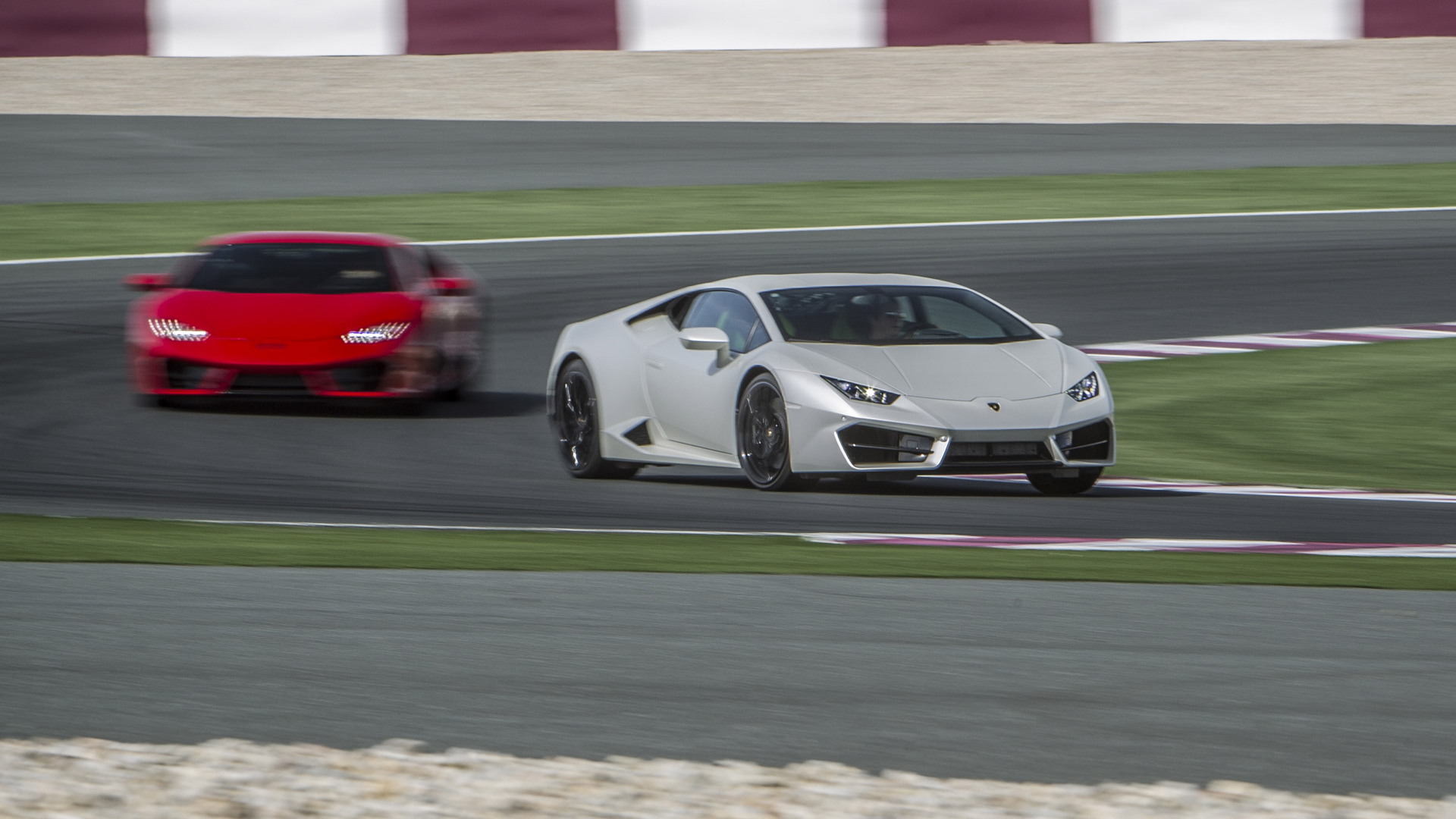 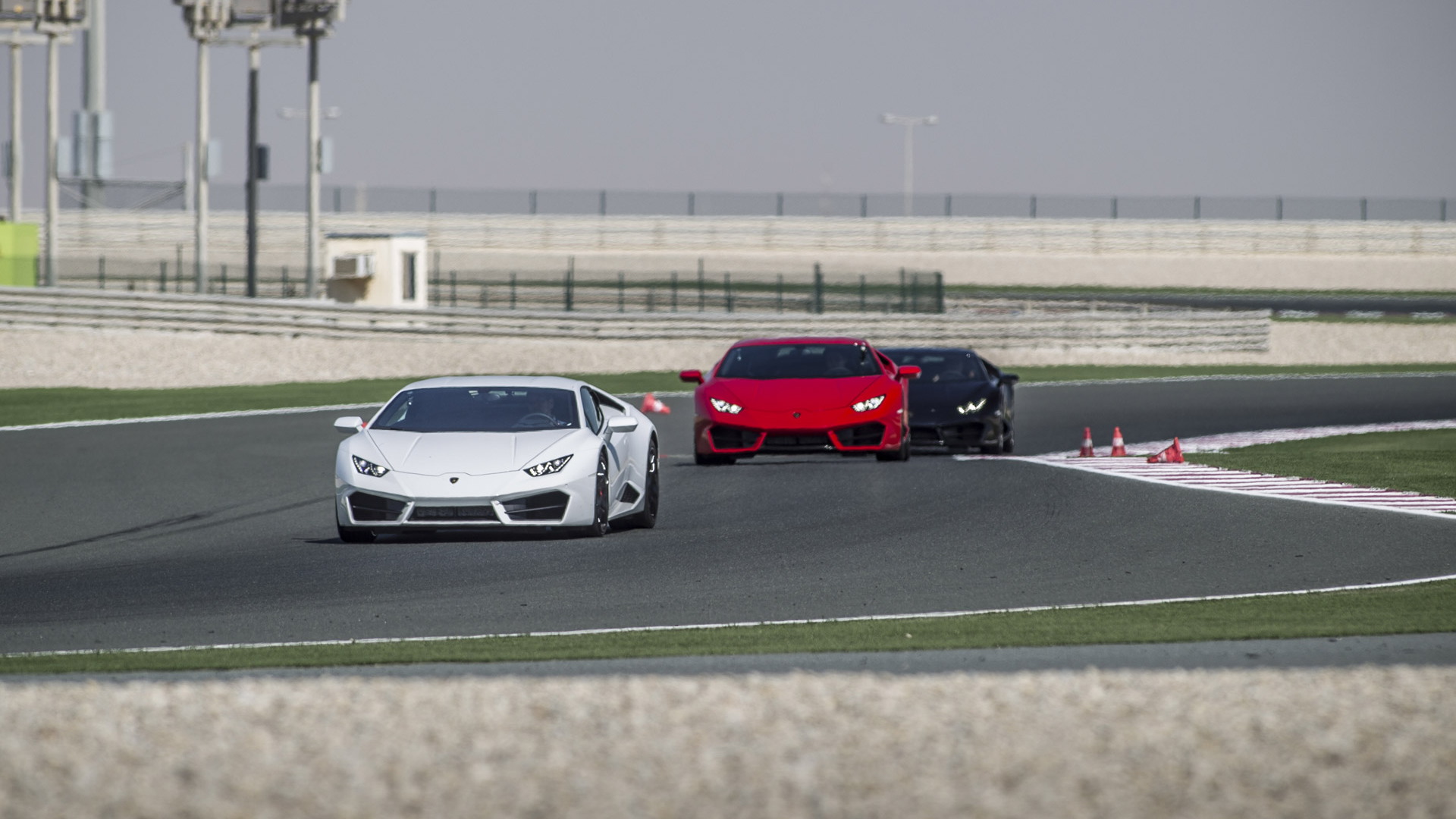 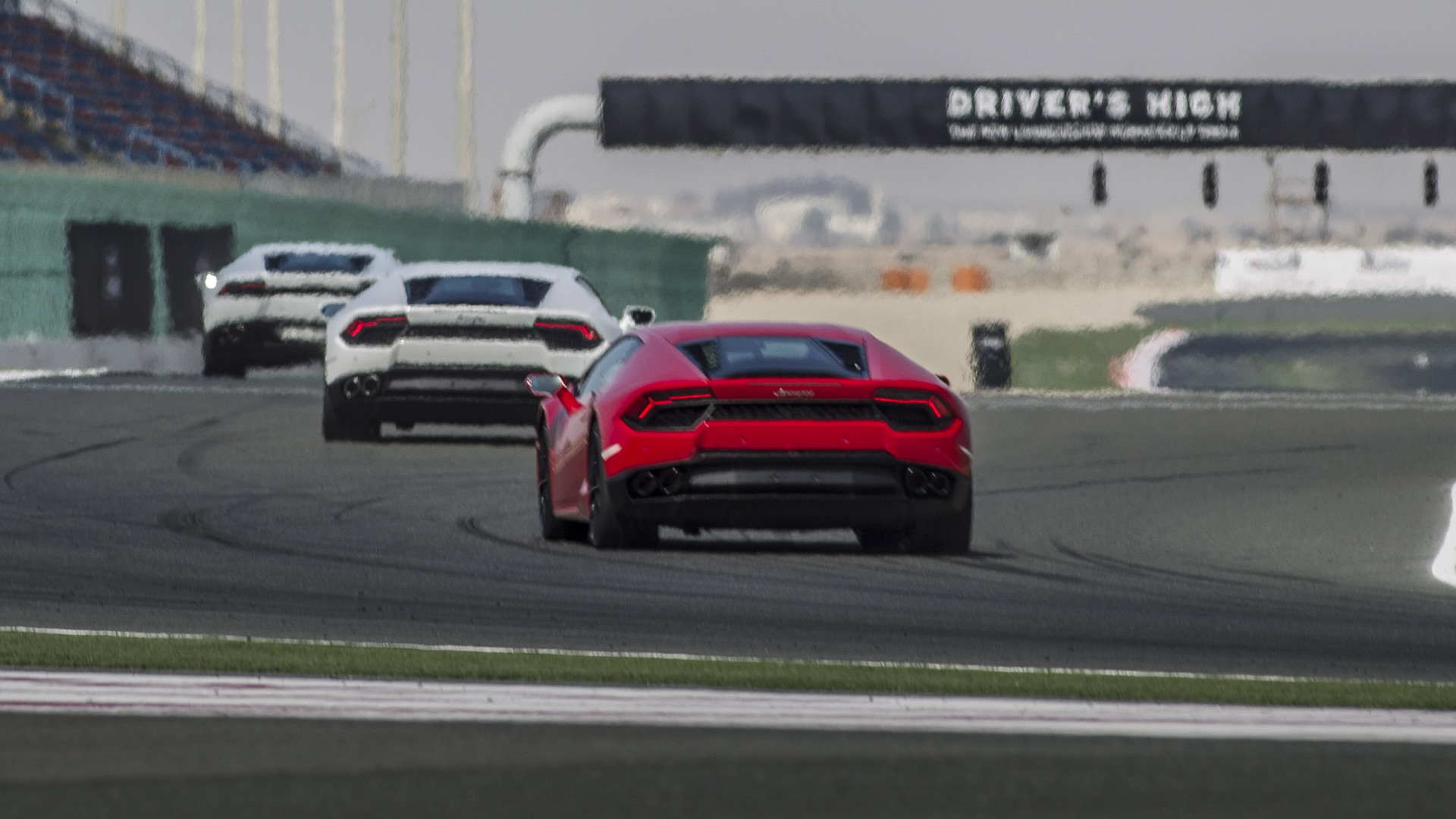 In a billionaire’s playground a $201,000 supercar is an inexpensive toy, but you can’t measure the fun of the new rear-drive Lamborghini Huracán LP 580-2 in dollars. In fact, if anything, less is more with the new entry-level Lambo.

How is it that a spin around a rarely-used Moto GP track in a car costing less than one-fifth that of a world-beater like the McLaren P1 or LaFerrari—fairly common sights in a place like Doha, Qatar, where I drove the new rear-drive Huracán—could hold more excitement and allure than the most hyper of hypercars? Because when you forget about lap times and focus on the fun, you pare the driving experience down to what really matters—and what matters ain’t fancy batteries and double-ton top speeds.

What matters is driver engagement, and the rear-drive Huracán provides that in big, drenching buckets. Without the front wheels adding to the tractive party, and 30 fewer horses (580 vs 610, in metric) than the LP 610-4, the LP 580-2 is slower around any given track in the world, says research and development director Maurizio Reggiani. It’s also 2 mph slower at the top end, hitting just 199 mph. But it’s far more rewarding to drive, regardless of the time on the clock.

Why is that? Because without the driveshafts spinning up the front wheels, you have less unsprung weight on the nose—and less weight total, saving about 72 pounds and making for a 40/60 front/rear split—meaning the front tires are only doing the job of steering.

And the steering system itself is much improved, retuned for greater feel and precision, even with the optional variable assist/variable ratio system. It’s still no Alfa 4C manual rack, but it’s a heck of a lot closer, placing it among the best available at any price. The suspension is a touch softer, too, allowing the car to move and respond to the driver’s inputs with a more natural feel.

Part of the new two-wheel-drive Lambo’s driver-first spirit also comes down to its new Sport mode. Using the traction control system and the Piattaforma Inerziale’s 3D position and yaw sensors, it enables a drift mode that is as easy to engage as tipping the steering-wheel-mounted controller and chucking the car into the corner. Once sideways, keep your foot in it, and the system will do most of the work to keep the car sideways—and a giant grin on your face.

This safety net for hoons is not just a gimmick. In my five track sessions with the car at the tight and twisty Losail International Circuit, I first approached the LP 580-2 as I would any serious sports car: put the thing in Corsa, drive a tidy line, and try to extract the most from its performance. But wringing the most out of a new car on a new track is a tough thing to do, especially when it’s someone else’s hardware and dropping a wheel—let alone roughing up some metal—is the last thing on your agenda. After two sessions of pushing the car as close to the limit as my talents would allow, I felt like I had a bit of a handle on the car, but I was far from confident in its behavior just beyond the limit.

Then I spent 15 minutes talking with Reggiani. His confidence in the Sport mode drifting system gave me enough courage to throw caution to the wind. I’m glad I did.

From the first corner, carrying in just a bit too much speed, trail braking the car and giving a flick to the wheel to initiate rotation, then standing on the gas, I was a convert. I proceeded to spend the next four laps laughing like a loon and doing things that would probably get me—and you—kicked out of a normal track day. All with perfect control and a surprising amount of freedom. The system knows how much slip angle the car can take, and gives it to you, letting the car thrash its rear Pirelli P Zero Corsas and hold a smooth drift past the apex and onto the straight. Unwind the wheel and keep your foot down and you slingshot to the next corner. Rinse and repeat.

Again, this is Lamborghini doing more with less—less intrusion, less nannying, less concern for the tight-and-tidy precision of ultimate pace. Instead you get more sideways, more fun, and much more of an idea what the car will ultimately do, and how it will behave, at the limit. Sure, it’s helping you out, controlling the drift. And the system will give you enough rope to spin the car, too (though I thankfully avoided that—narrowly).

But after two sessions of thrashing the car as sideways and ham-fistedly as possible, I struck out on another speed run for my final session. Thanks to an enabling Lamborghini hot-shoe as lead driver, the pace was very brisk indeed. With the rear-drive Huracán back in Corsa mode, I felt confident matching his entry speeds, clipping the apex, and getting back to the gas. Here, I learned that as well as being a hoon-tastic vehicle for silly, stupid fun, the new LP 580-2 is also a fine-tuned weapon for laser-sharp precision.

Again, I trail brake into the corner, inducing just enough yaw to point the car down to the apex, allowing me to unwind the wheel early and get back to the throttle. The stability control system and 3D sensors are now tuned for maximum pace, letting me pin the throttle and get just the right amount of yaw on the way out of the corner, too—a feeling very close to that found in the brilliant PTM Mode 5 Track setting in the Corvette ZR1. It’s a buttoned-down, controlled version of the controlled drift I got in Sport mode, but having familiarized myself with the car’s balance and behaviors just over the limit, I’m much more confident in driving right up to that limit without going over. The whole machine works in harmony.

The difference from the all-wheel-drive LP 610-4 is marked. While that machine, too, is a fine track day weapon, easily the best Lamborghini that had been built to date in that regard, the new LP 580-2 is even better—ultimate pace be damned. Better steering, zero chassis-induced understeer, and plenty of power even for the jaded supercar elite, the rear-drive Huracán is simply more engaging and more rewarding to drive well.

For the driver looking to not only enjoy their supercar on track, but also to improve their own ability to approach the car’s true limits, the new LP 580-2 is the perfect tool—and the perfect toy. Even if it is the cheapest one on the billionaire’s playground.