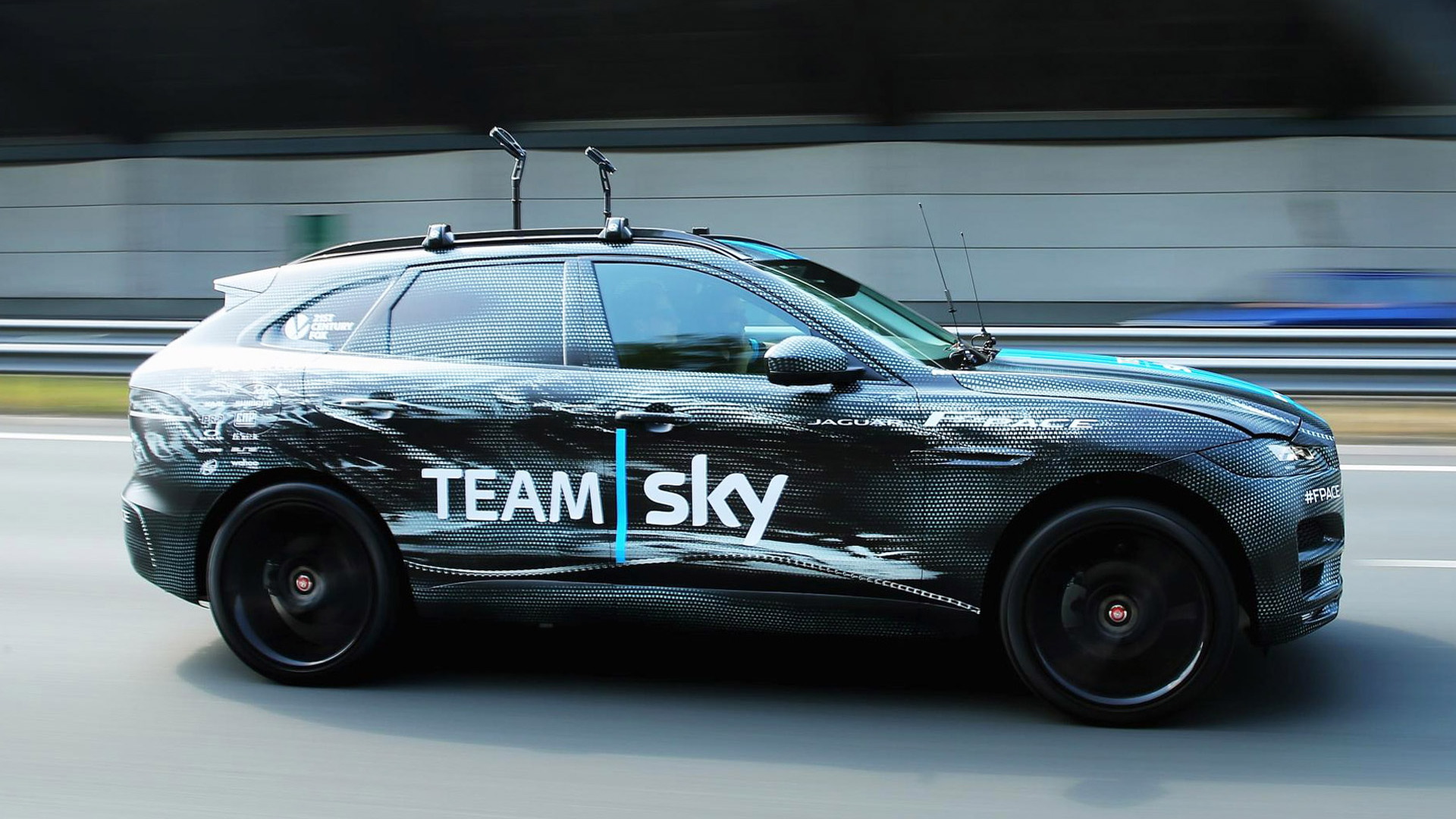 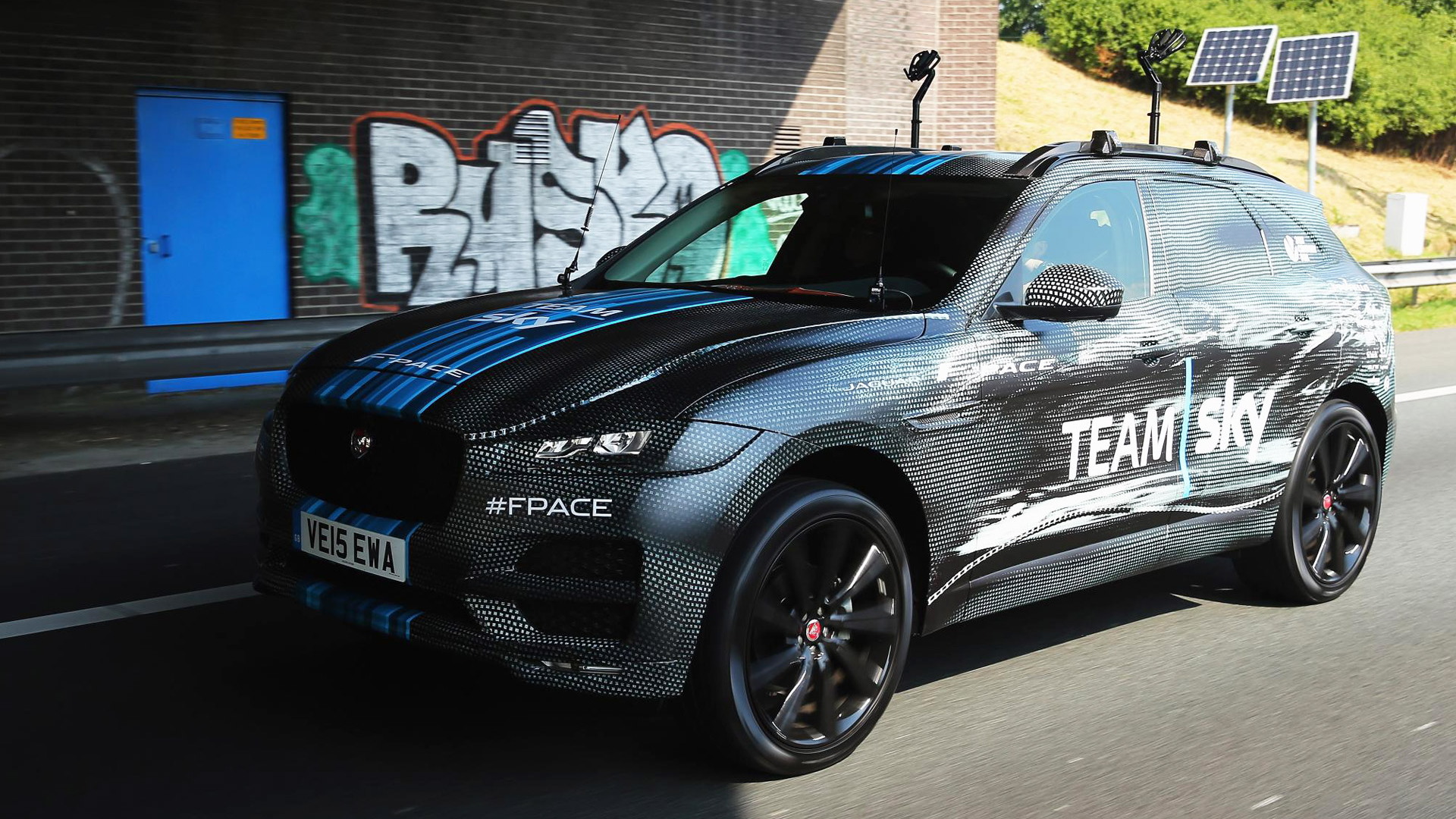 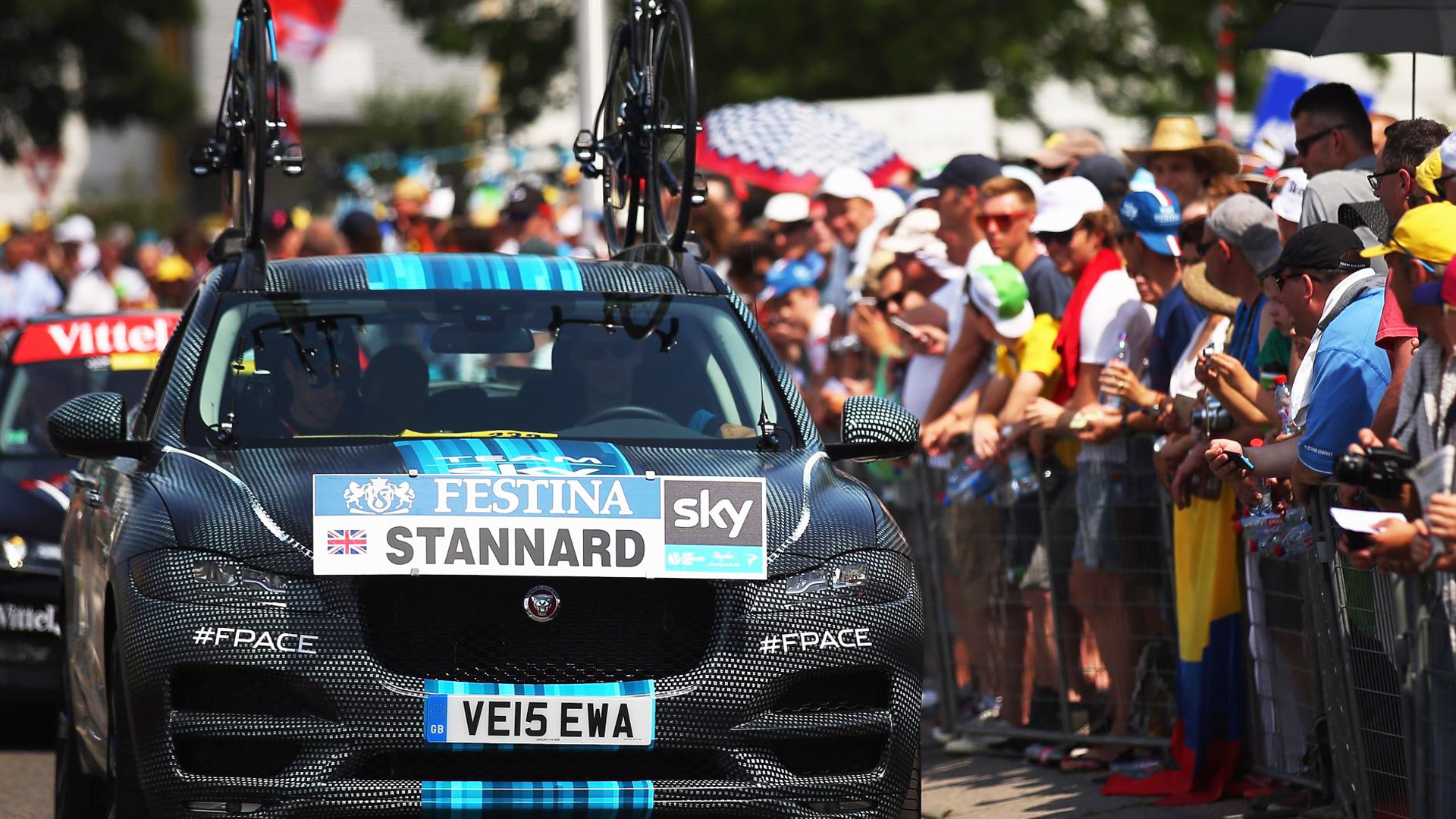 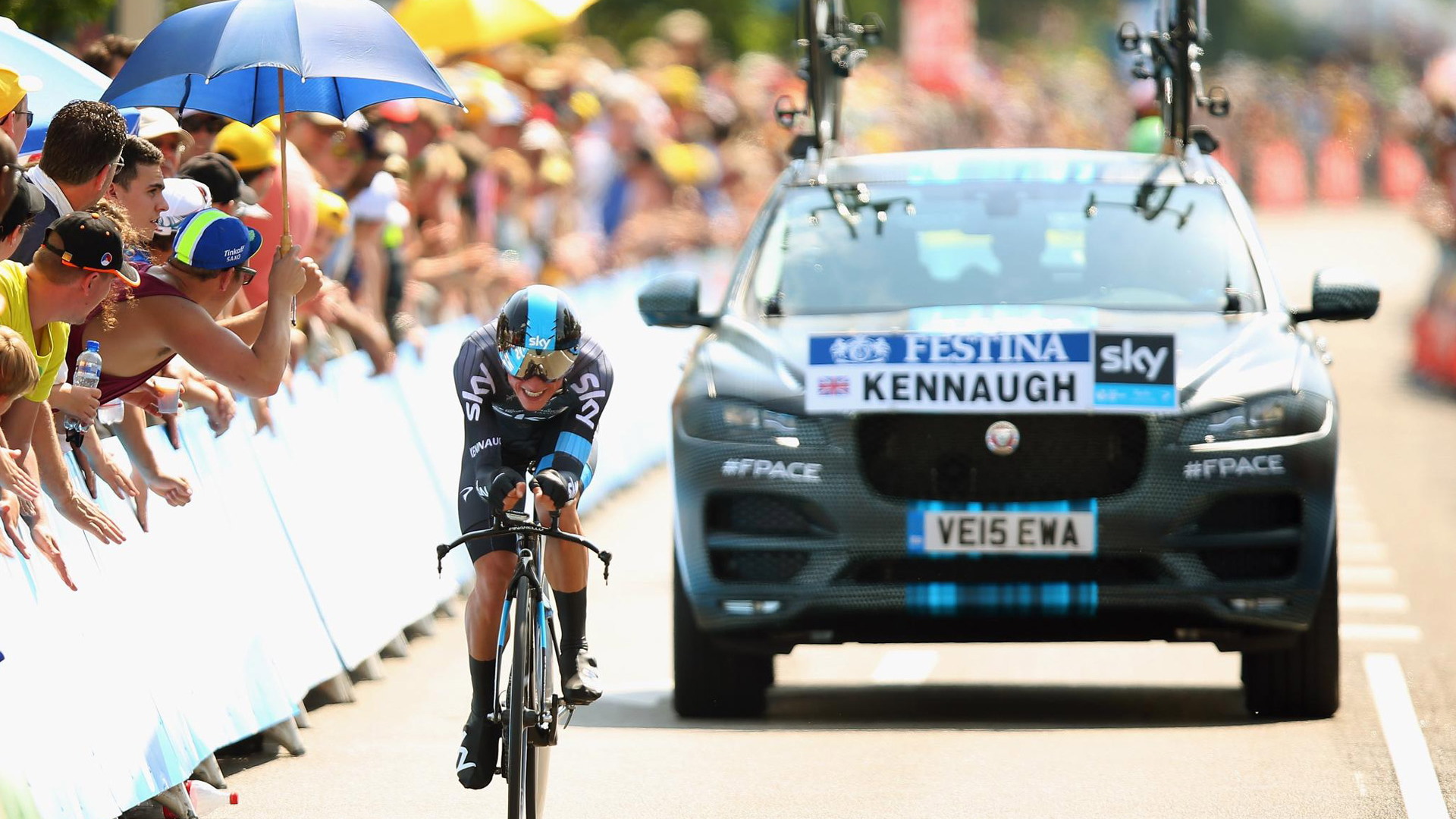 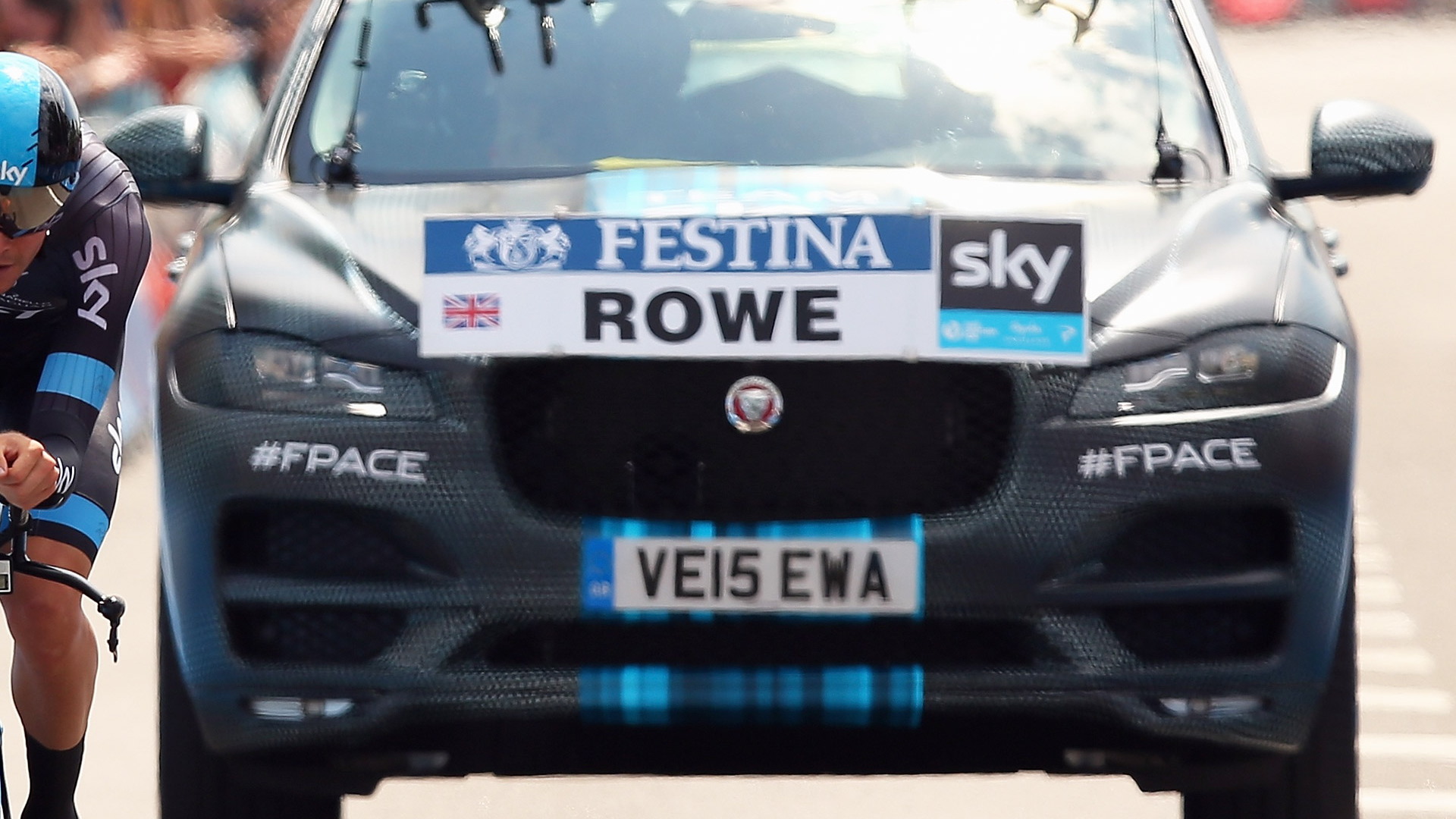 Its introduction at the 2015 Frankfurt Auto Show is still more than three months away, but the Jaguar F-Pace SUV has appeared in public wearing only light camouflage at the Tour de France. Jaguar's first-ever utility vehicle served as a support vehicle for Team Sky rider Chris Froome and his teammates during Stage One of the hugely popular bike race. That individual time-trial stage started in Utrecht, The Netherlands, on Saturday.

Jaguar issued photos of the distinctively wrapped F-Pace, adding its own images to the growing library of F-Pace spy shots. The F-Pace used also has what the luxury marque calls a "cutting-edge bike racking solution" that offers quick release for the team's racing bicycles.

Jaguar notes that the "wide, spacious cabin" accommodates up to four crew members "in complete comfort," while equipment that includes "drinks, energy gels, clothing, tools, and spares for the bike" fits into a cargo hold that it says is the largest in its class.

READ: Mustang Pulls Ahead Of Camaro In The Sales Race For First Time In Six Years

Froome and the F-Pace also appear in some short films shot at Team Sky's La Pierre-St. Martin training camp, with the British utility vehicle following the rider as he tackles a grueling hill climb. The rider called the Jaguar F-Pace "awesome" after the stunt and said he expected it would "create a huge impression."

The Jaguar F-Pace will premiere this September at the Frankfurt Auto Show, and go on sale next year. To see what else will be appearing at the German show, head to our dedicated hub.