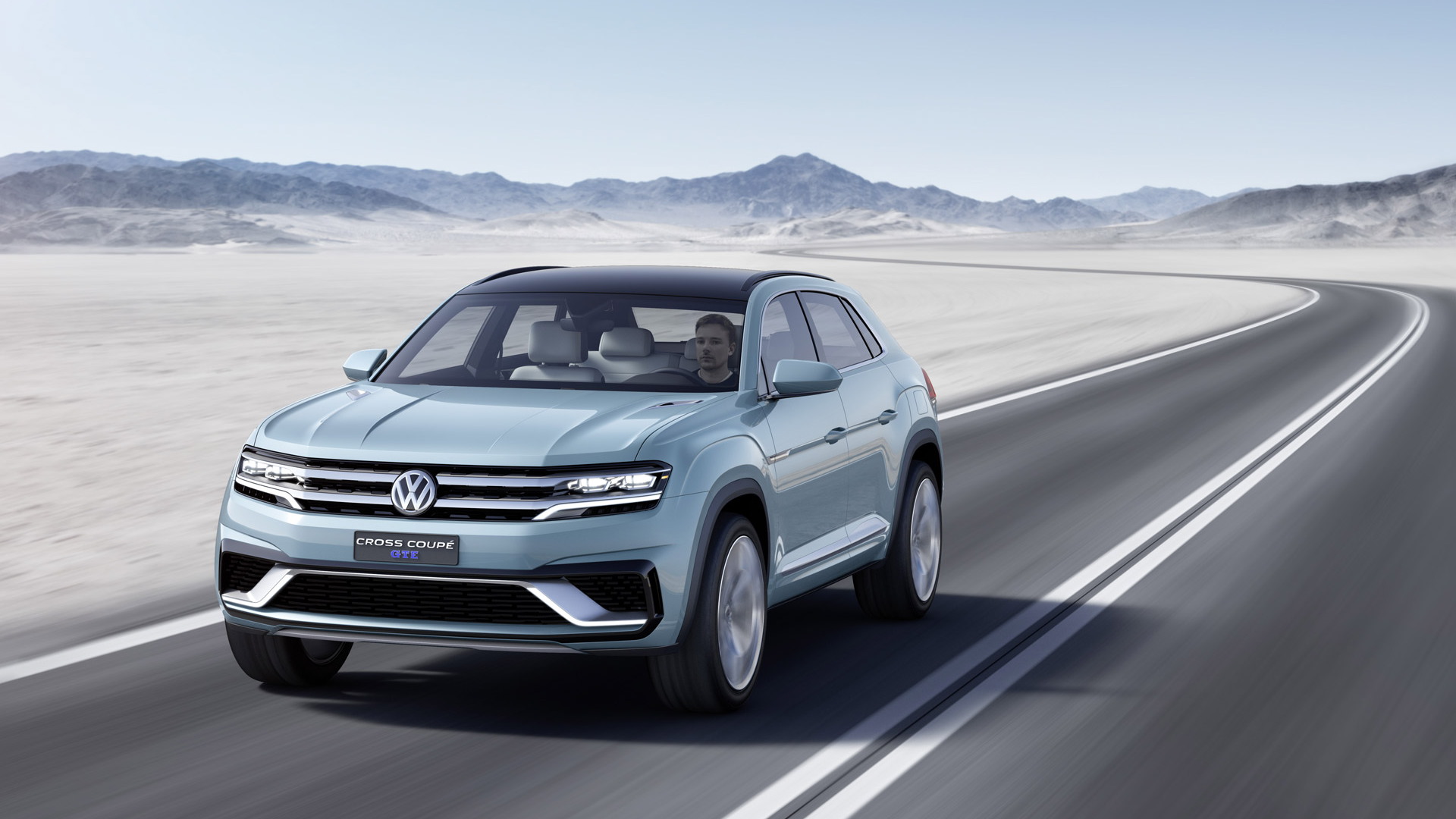 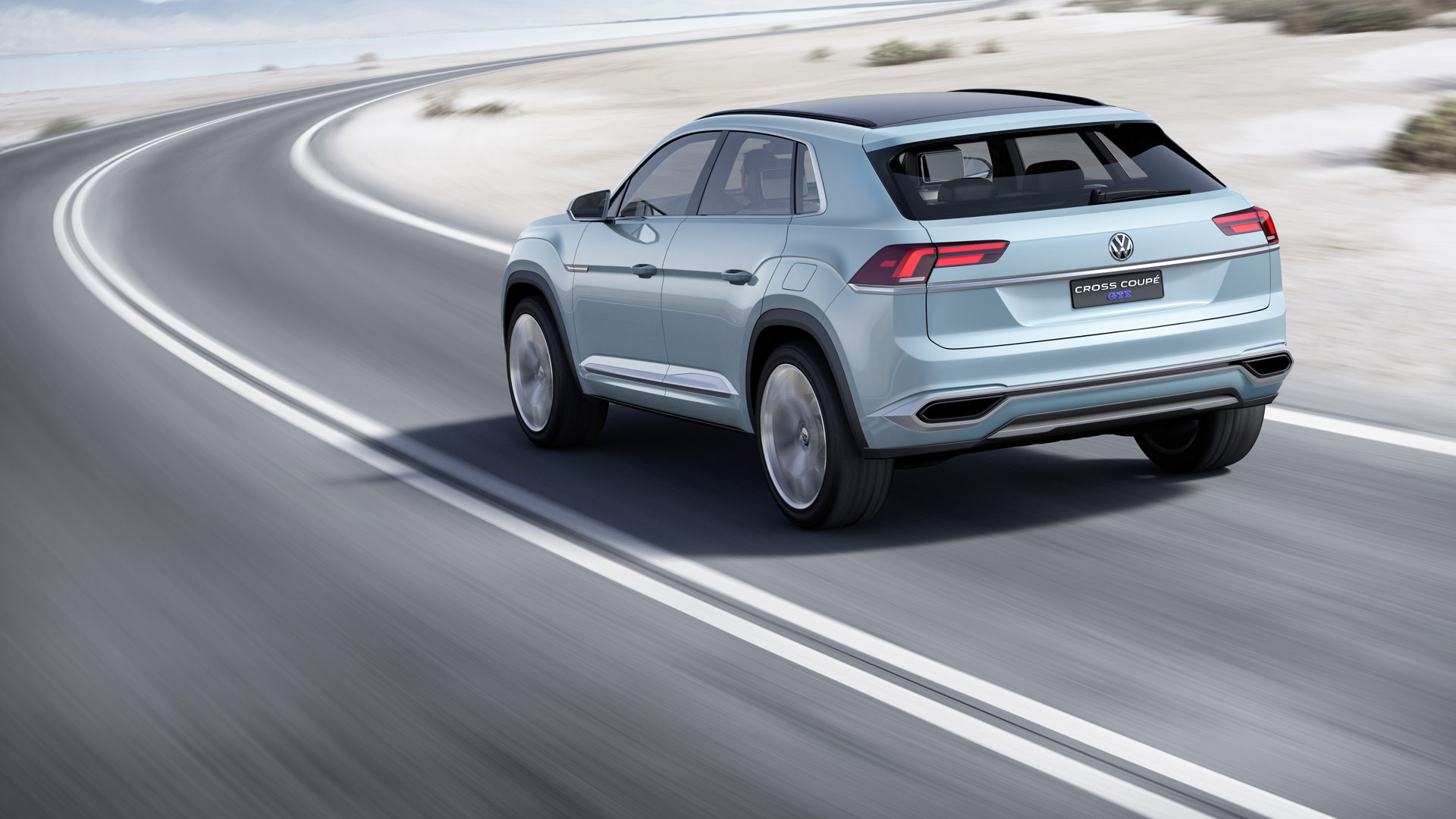 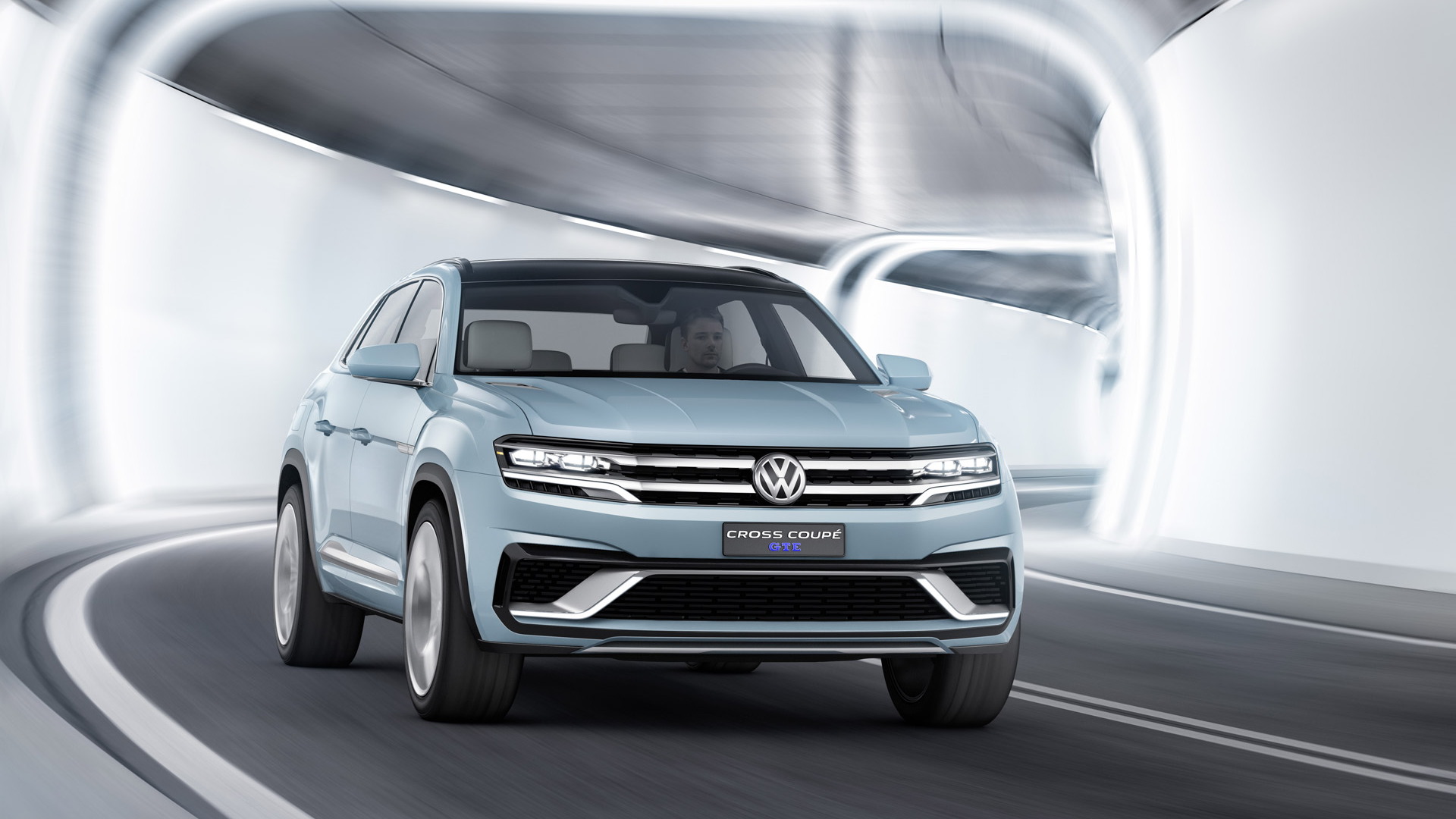 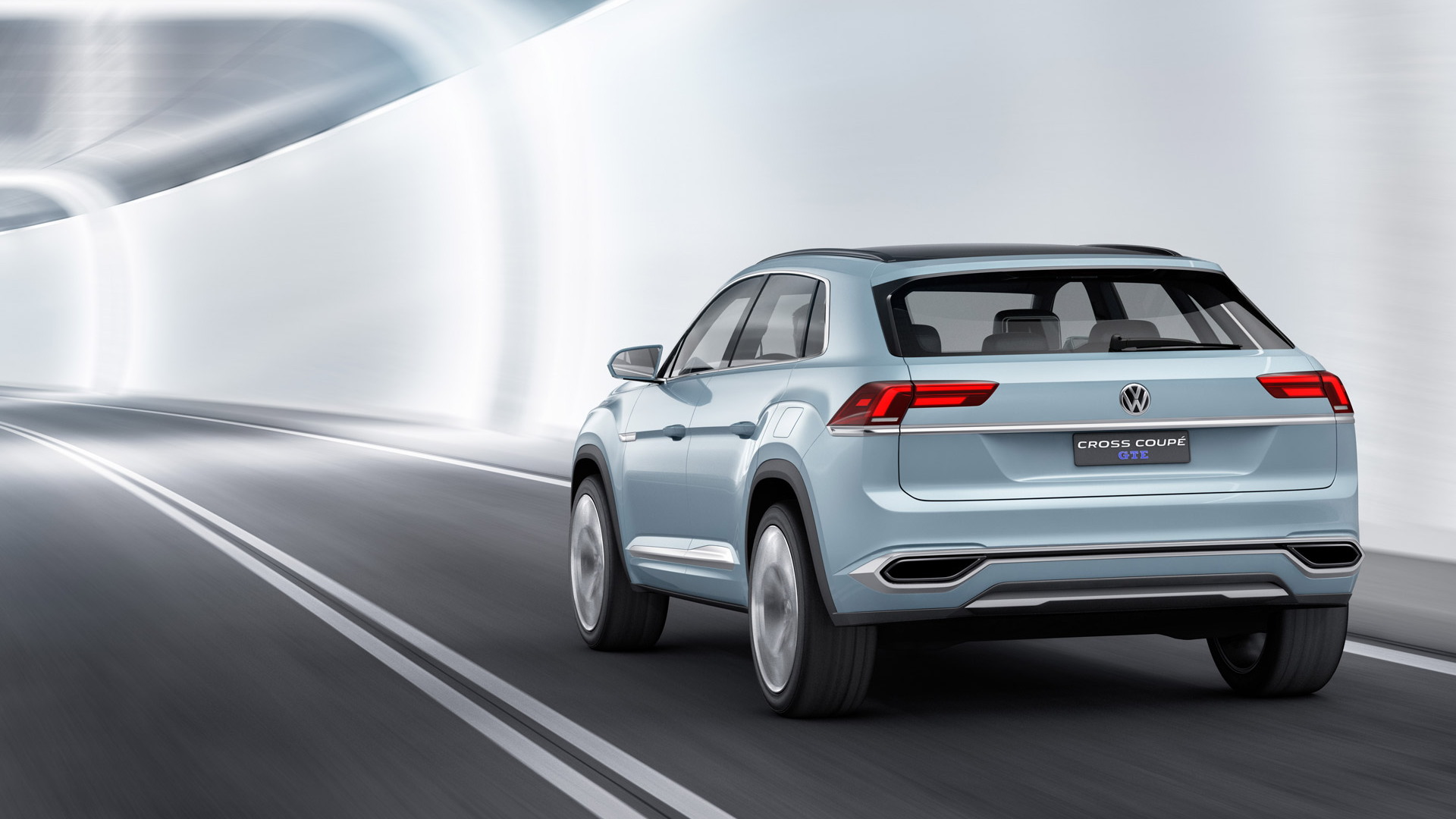 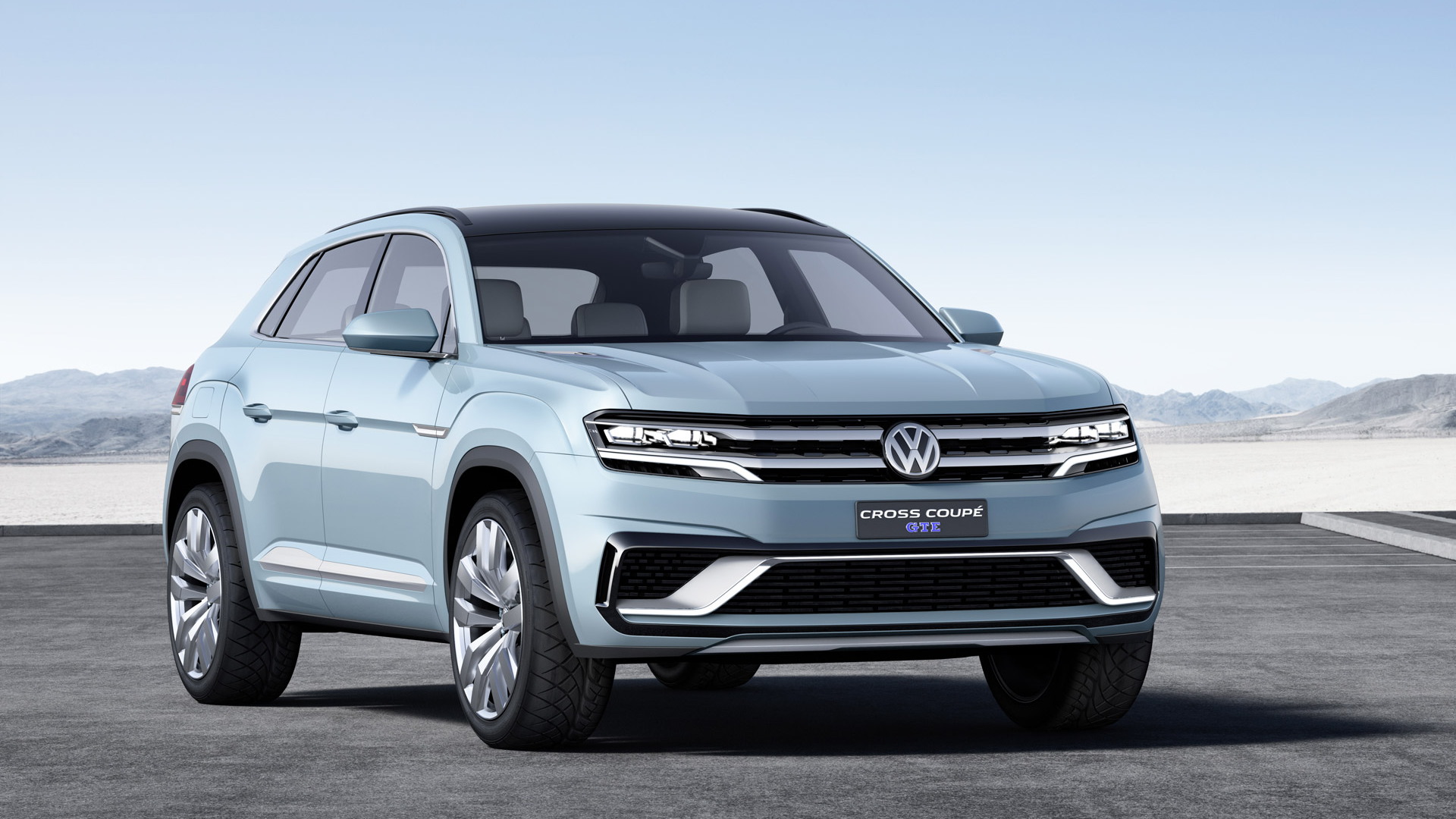 Volkswagen is set to present at this week’s 2015 Detroit Auto Show a new evolution of its ‘Cross Coupe’ series of concept vehicles, the first of which we saw back in 2011. The latest concept, dubbed the Cross Coupe GTE, represents the third evolution of the coupe-like crossover concept series, with the second evolution being shown back in 2013.

The latest Cross Coupe GTE shows the design language that will feature on VW’s future high-riding models like the next-generation Tiguan and the new seven-seat SUV set to be built at the automaker’s Chattanooga, Tennessee plant starting in late 2016. And according to a recent report the concept also hints at a sporty coupe-like crossover VW is also planning for production.

With five seats, a coupe-like profile and an overall length of 190.8 inches, the Cross Coupe GTE is similar in size and stature to BMW’s X6, the original coupe-like crossover. It is based around VW’s flexible MQB platform and is powered by a plug-in hybrid drivetrain, hence the “GTE” part of its name. VW has two other GTE models, a Golf GTE and a Passat GTE.

The plug-in hybrid drivetrain in the Cross Coupe GTE consists of a 3.6-liter V-6 working in conjunction with two electric motors and a six-speed DSG dual-clutch transmission. The gasoline engine delivers 276 horsepower and 258 pound-feet of torque and is paired with one electric motor, rated at 54 hp and 162 lb-ft. These two power sources are used to drive the front wheels. A second electric motor spins the rear wheels; it’s rated at 114 hp and 199 lb-ft. The motors are powered by a compact lithium-ion battery housed in the center tunnel, which is rated at 14.1 kWh.

The total output of the drive system adds up to 355 hp and 280 lb-ft, enough to power the Cross Coupe GTE onto a top speed of 130 mph and accelerate it from 0-60 mph in just 6.0 seconds. The setup also allows multiple driving modes, including an all-electric mode, a maximum power mode where all power sources are working, and a Battery Hold / Battery Charge mode where the vehicle can maintain a certain level of charge so that it can be used when required. Charging can be done using a wall outlet or on the road using the gasoline engine or brake-energy regeneration.

VW estimates the fuel economy of the Cross Coupe GTE to be about 70 mpge. The all-electric range, meanwhile, is about 20 miles.

As mentioned above, the Cross Coupe GTE previews the new look of VW’s future high-riding models, especially those designed primarily for the U.S., like the upcoming seven-seater model. The key themes are the strong horizontal lines, muscular haunches and pronounced wheel arches. Another interesting element is the LED headlight design, which features lights fully enclosed by the grille.

At the rear, the side character line feature merges into a polished aluminum trim strip, above which are trapezoidal LED tail-lights. A skidplate with an integrated diffuser forms the final major design element at the rear of the concept.

VW tells us that like the exterior, the interior of the Cross Coupe GTE also hints at the design of upcoming production vehicles.  Here, horizontal themes are once again the focus. The Volkswagen Group’s 12.3-inch digital instrument cluster has been utilized, and sitting in the center stack is a new 10.1-inch infotainment touchscreen which comes framed by two sets of vertical air vents on either side. A second touchscreen below this is used to control the climate features.

While VW’s new seven-seat SUV is due in late 2016, the earliest arrival of any production version of Cross Coupe GTE would likely be a year after that date.