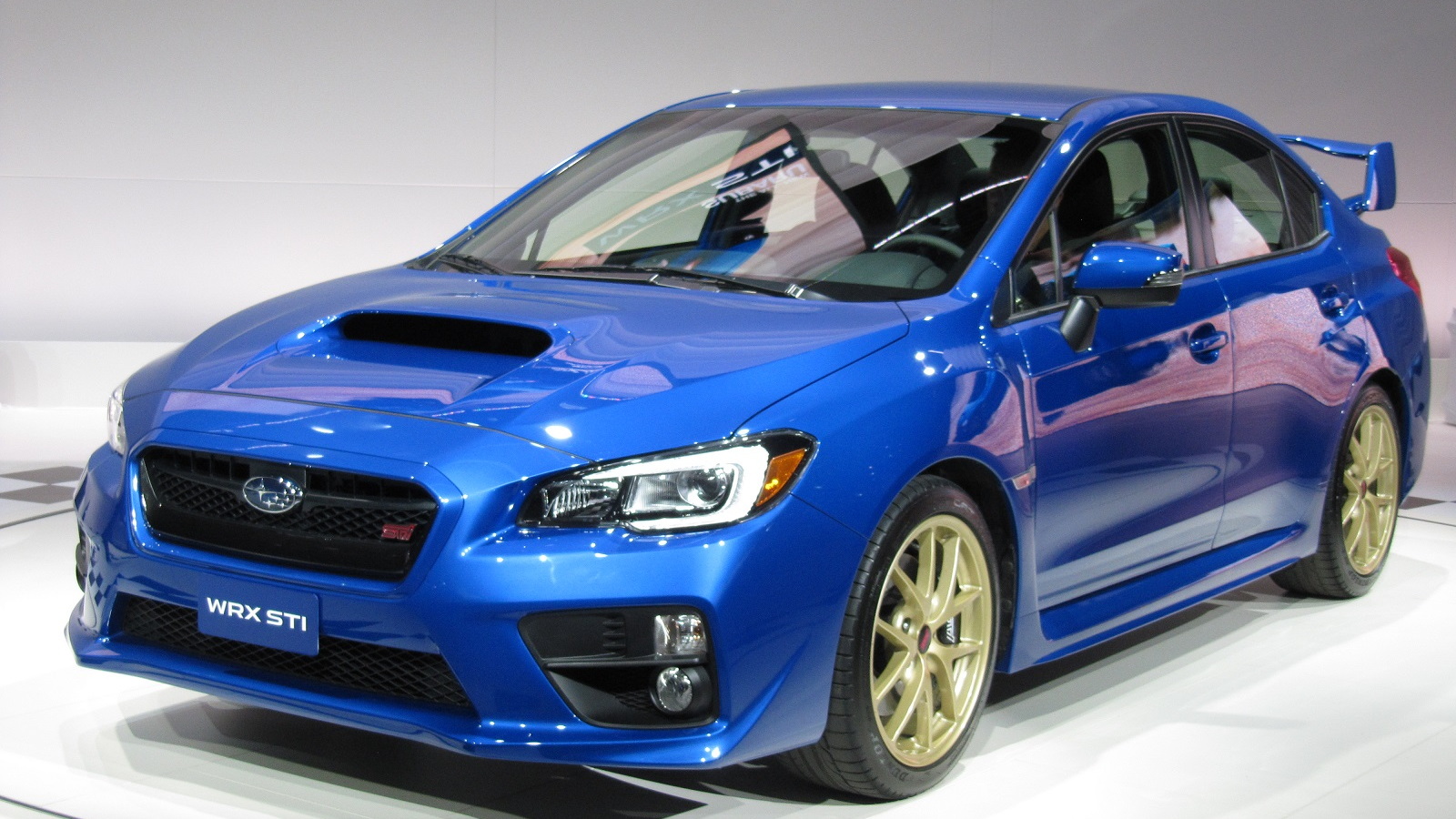 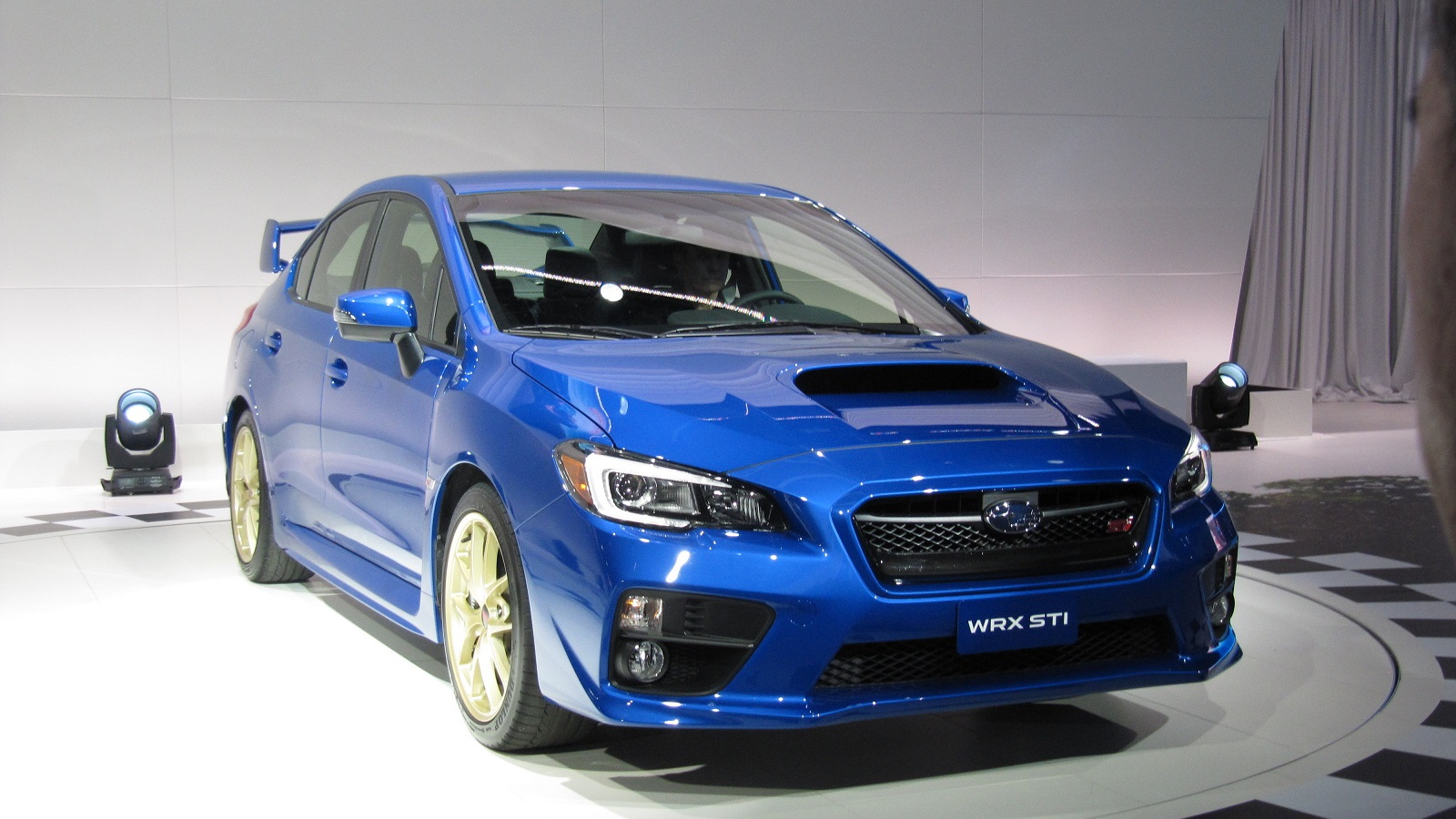 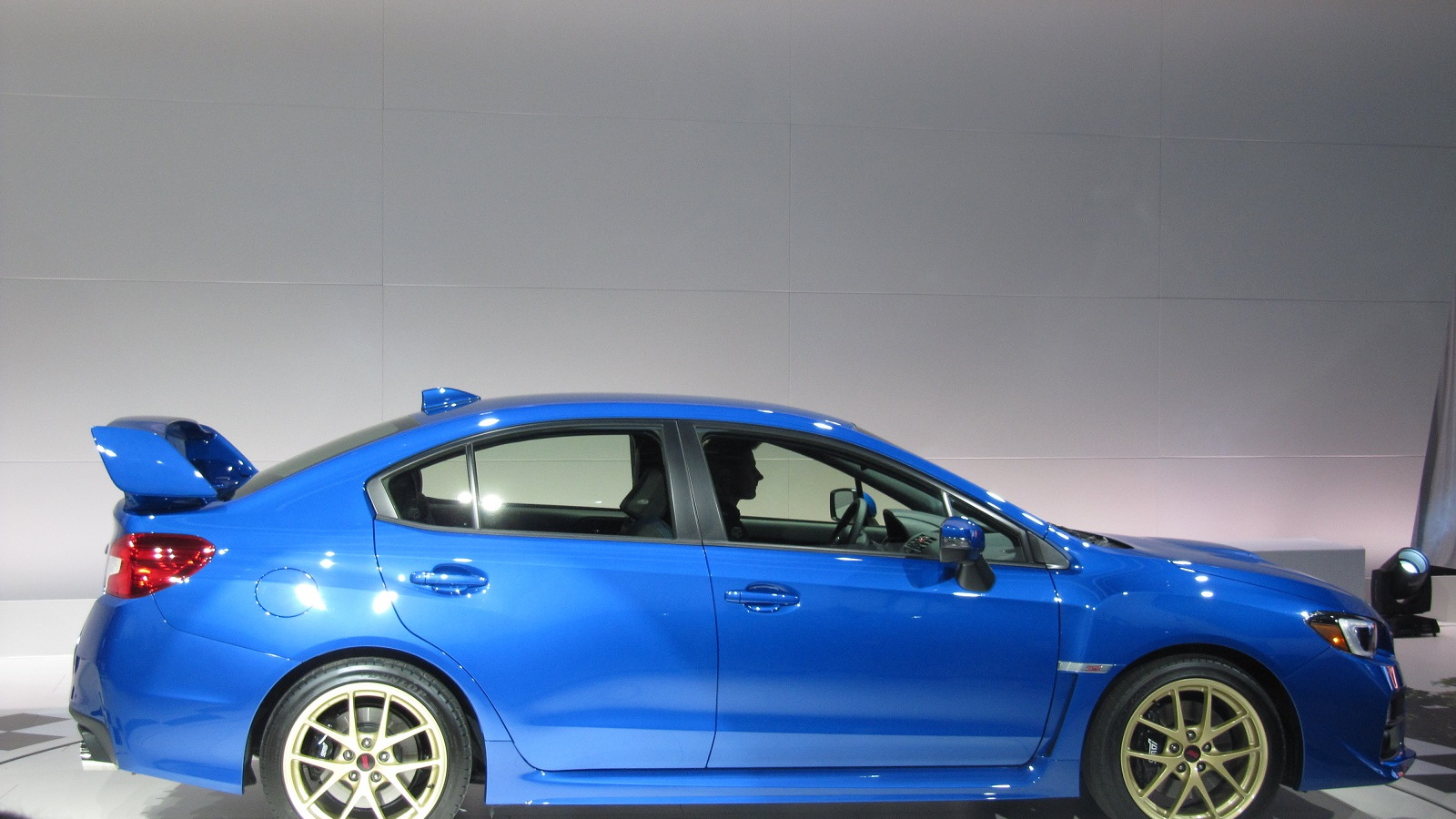 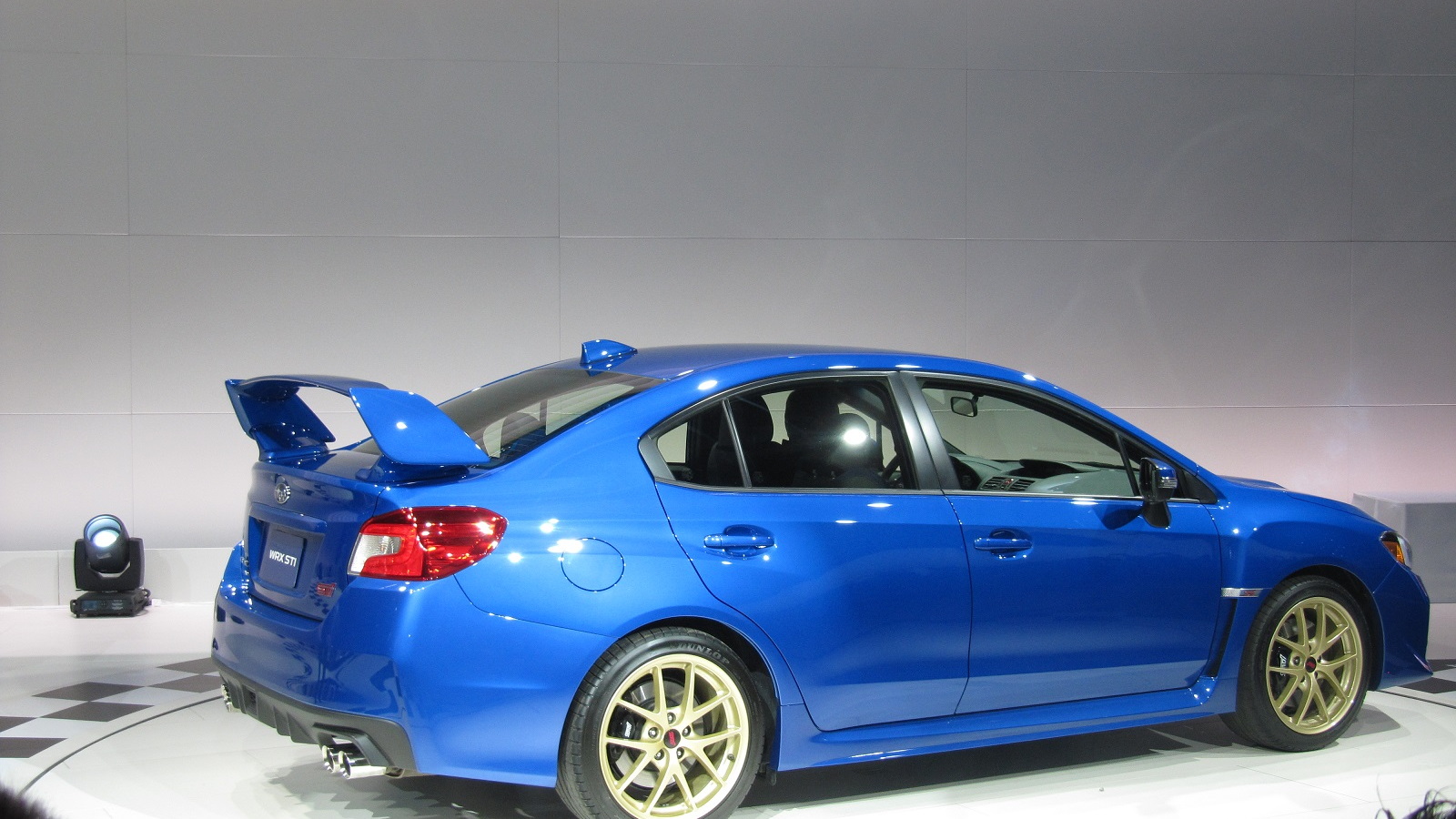 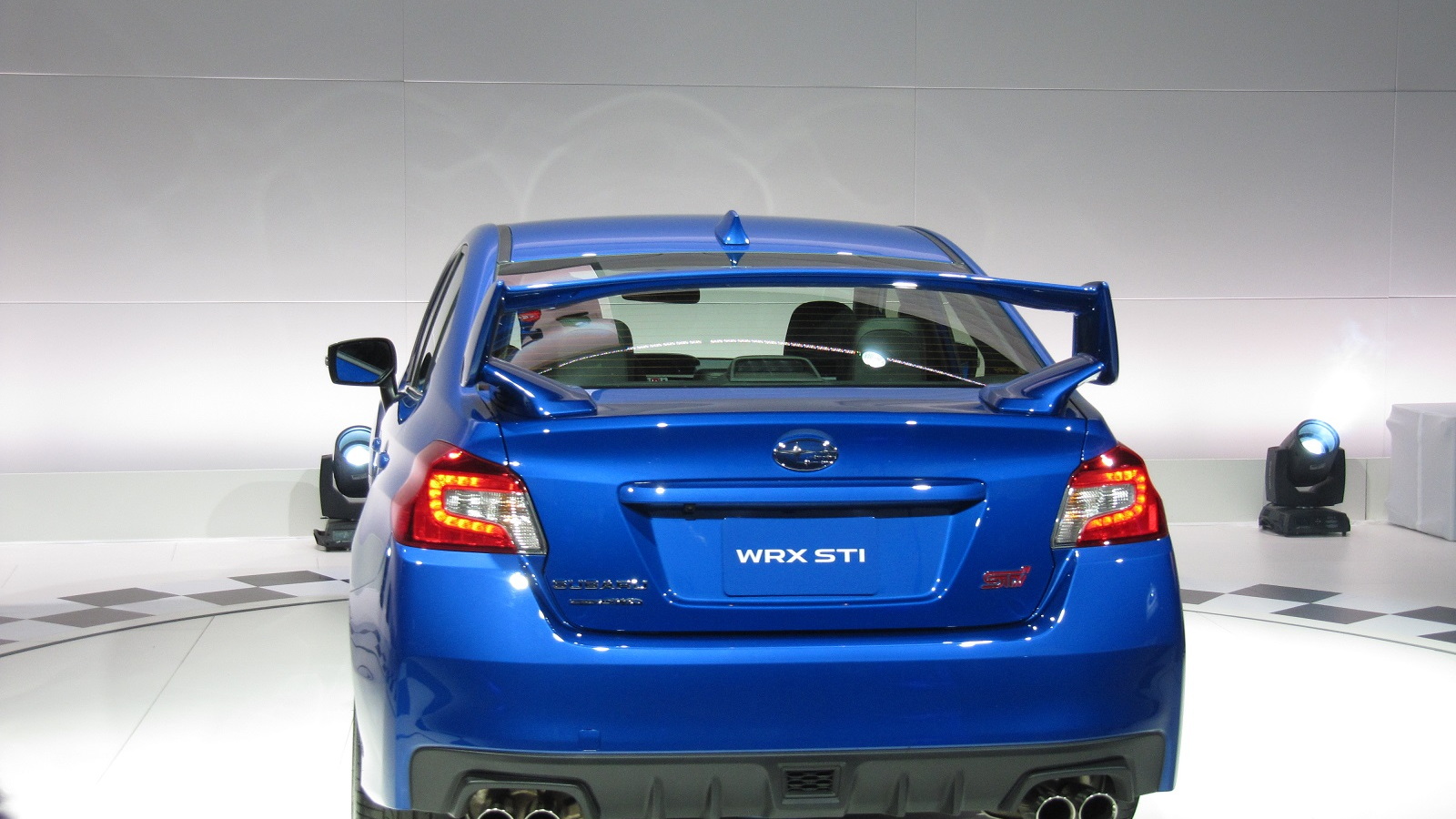 35
photos
The 2015 Subaru WRX STI is the ultimate high-performance version of the latest WRX all-wheel-drive compact sedan. It boosts the power, refines the standard all-wheel-drive system, and adds new aerodynamic design features to distinguish it from the standard WRX. The STI is really Subaru's performance flagship, and the company is also offering a special version known as the STI Launch Edition, limited to production of 1,000 units.

For 2015, the new STI is built on a stiffer chassis and hits the road with a new wide-body design and interior upgrades that include Alcantara upholstery. What Subaru calls a "nose cone" frontal design combines the front bumper and grille into a single unit, framed by narrow headlights with LED low beams. The hood is made of aluminum to reduce weight, and its scoop feeds air to the turbo intercooler. The hood is one of many body panels and components distinct to the STI model, including the fenders, doors, quarter panels, bumpers, and rear LED taillight clusters. Front fender vents are covered with mesh screens, and the fog lights are surrounded with a pattern reminiscent of carbon fiber. The traditional STI large trunk spoiler finishes off the body.

It's the powerful engine that makes an STI, in this case an exclusive 305-horsepower turbocharged 2.5-liter flat four producing 290 pound-feet of torque at 4,000 rpm. The turbo is intercooled, and only a single transmission is offered, a reinforced six-speed manual gearbox. Power is delivered to all four wheels through a limited-slip center differential that's electronically controlled for maximum torque transfer to individual wheels. The torque is nominally split 41 percent to the front wheels, 59 percent to the rears. Side-to-side torque is controlled by limited-slip differentials on the front and rear axles as well.

STI drivers have a great deal of control over the car's performance characteristics and power delivery to the wheels.

The SI-Drive powertrain management system offers three modes through a rotary dial on the console: the standard Intelligent for normal driving conditions, Sport for sportier characteristics, and Sport Sharp for maximum power and responsiveness from the engine.

The driver also has three different settings for the AWD system that vary the locking behavior of the center differential. Automatic mode allocates the power among wheels based on standard control algorithsm; Manual mode lets the driver opt for one of six locking levels to suit a particular road condition; and a new Active Torque Vectoring mode adds braking pressure to the inside front wheel to provide more neutral cornering. Finally, the Vehicle Dynamics Control traction-control and stability system lets the driver choose how much control is applied, from Normal through to Traction--both of which engage the Active Torque Vectoring--while the Off setting removes intervention by the system altogether.

The STI body shell is stiffened at key locations for greater rigidity, improving the handling and roadholding. It also permits quicker steering that Subaru says was benchmarked against sports cars for responsiveness. The wheel requires just 2.5 turns lock to lock, against 2.8 in the standard WRX. Stiffer springs and a unique front suspension with aluminum lower arms are paired with 18-inch wheels fitted with standard summer performance tires.

Inside the 2015 WRX STI, the cabin is roomier and the dashboard is lower, increasing visibility through a more steeply-raked windshield with thinner pillars. Access is easier, courtesy of wider door openings and lower sills, and rear legroom rises by almost 2 inches. A larger 12-cubic-foot trunk extends into the passenger compartment when the 60/40 split rear seat back is folded down.

The front seats include head restraints that can be adjusted not only for height, but also for tilt.

Seating surfaces are now Alcantara, with red and black leather bolsters and red accent stitching. Through a flat-bottomed steering wheel wrapped in leather--inspired by motorsports, Subaru says--the driver views an instrument cluster with electroluminescent gauges, including a 3.5-inch central display for vehicle information.

Interior materials have been upgraded from previous STI models, with soft-touch surfaces and a 4.3-inch display showing vehicle functions, including the image from a rear-view camera, a boost gauge reading, and a VDC screen to show the operation of the traction-control system. The steering wheel includes controls for both the audio system and Bluetooth pairing.

Standard features on the 2015 Subaru WRX STI include an All-Weather Package with heated front seats and exterior mirrors, plus a de-icer for the wipers, and dual-zone automatic climate control. The standard AM/FM/satellite/CD audio system includes audio streaming and Bluetooth control, a USB port and auxiliary input jack, and iPod control.