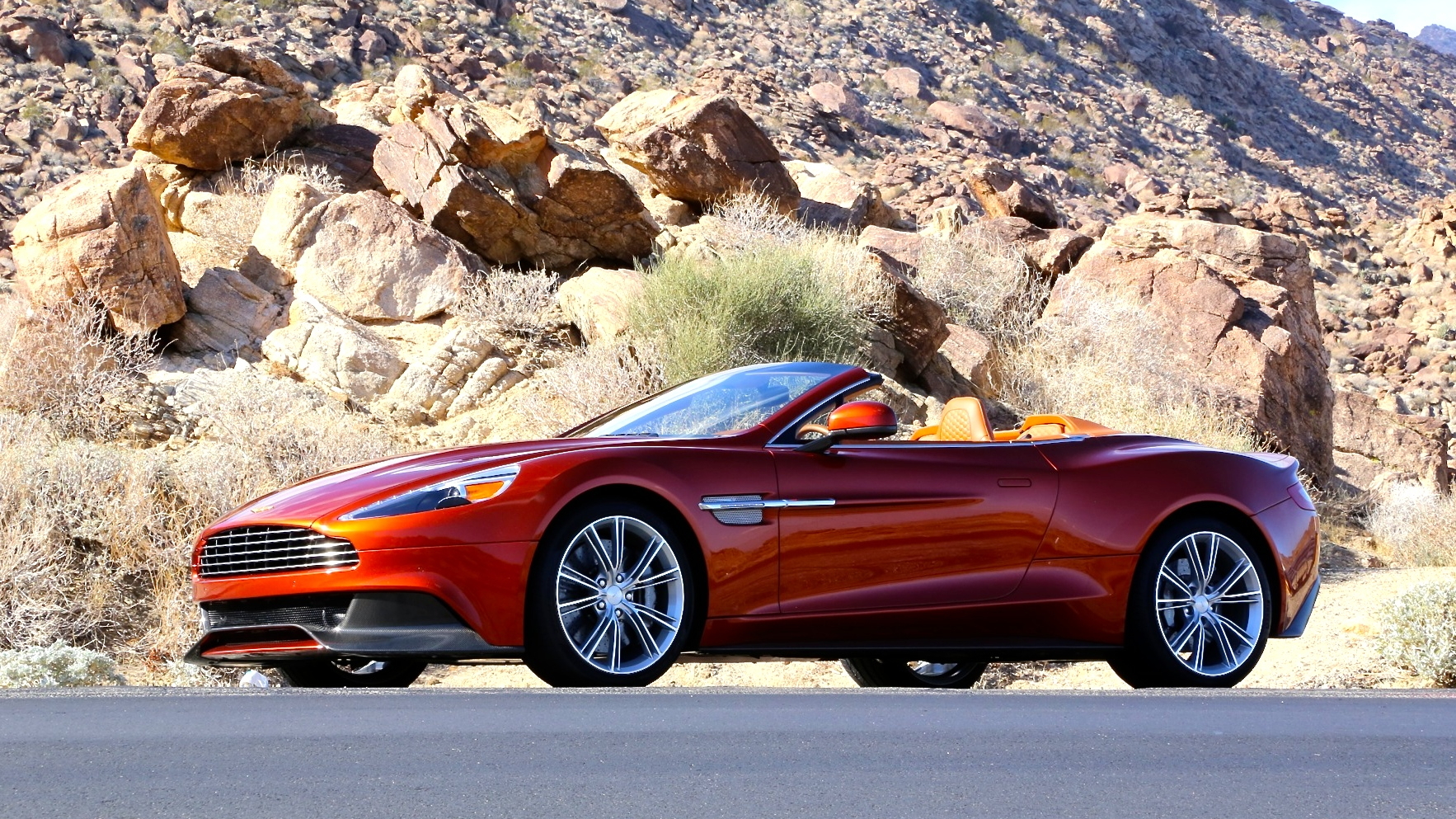 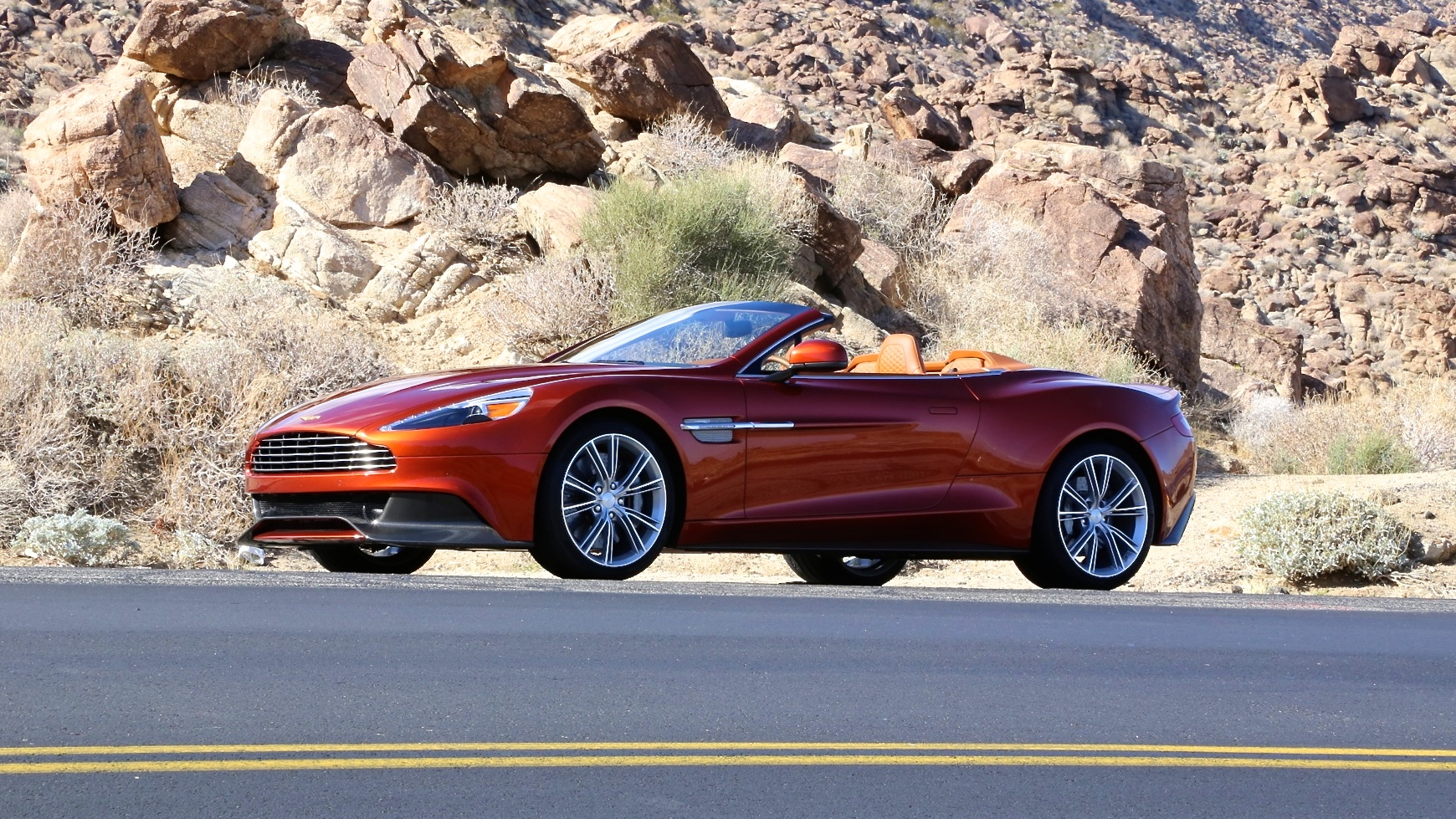 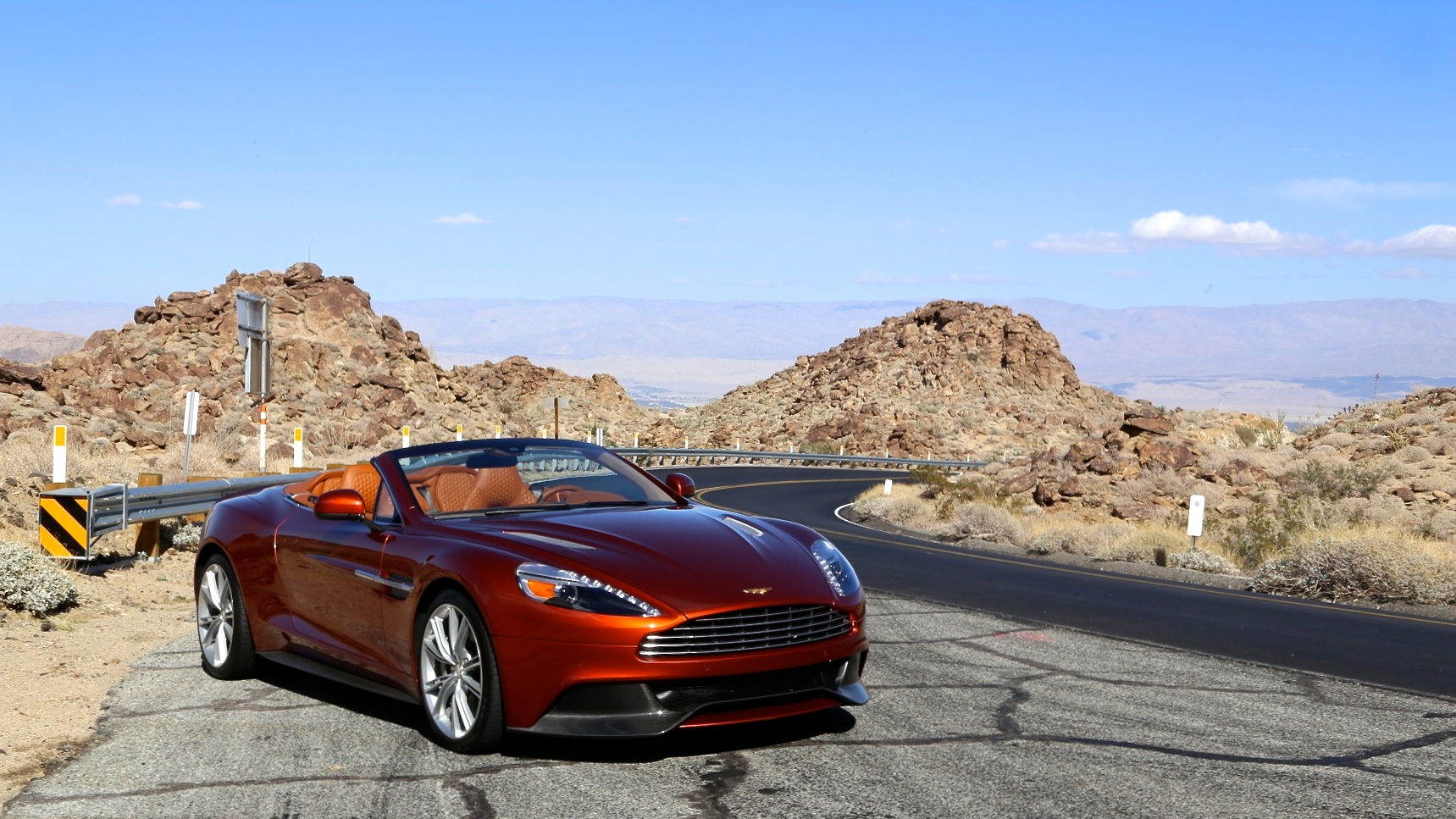 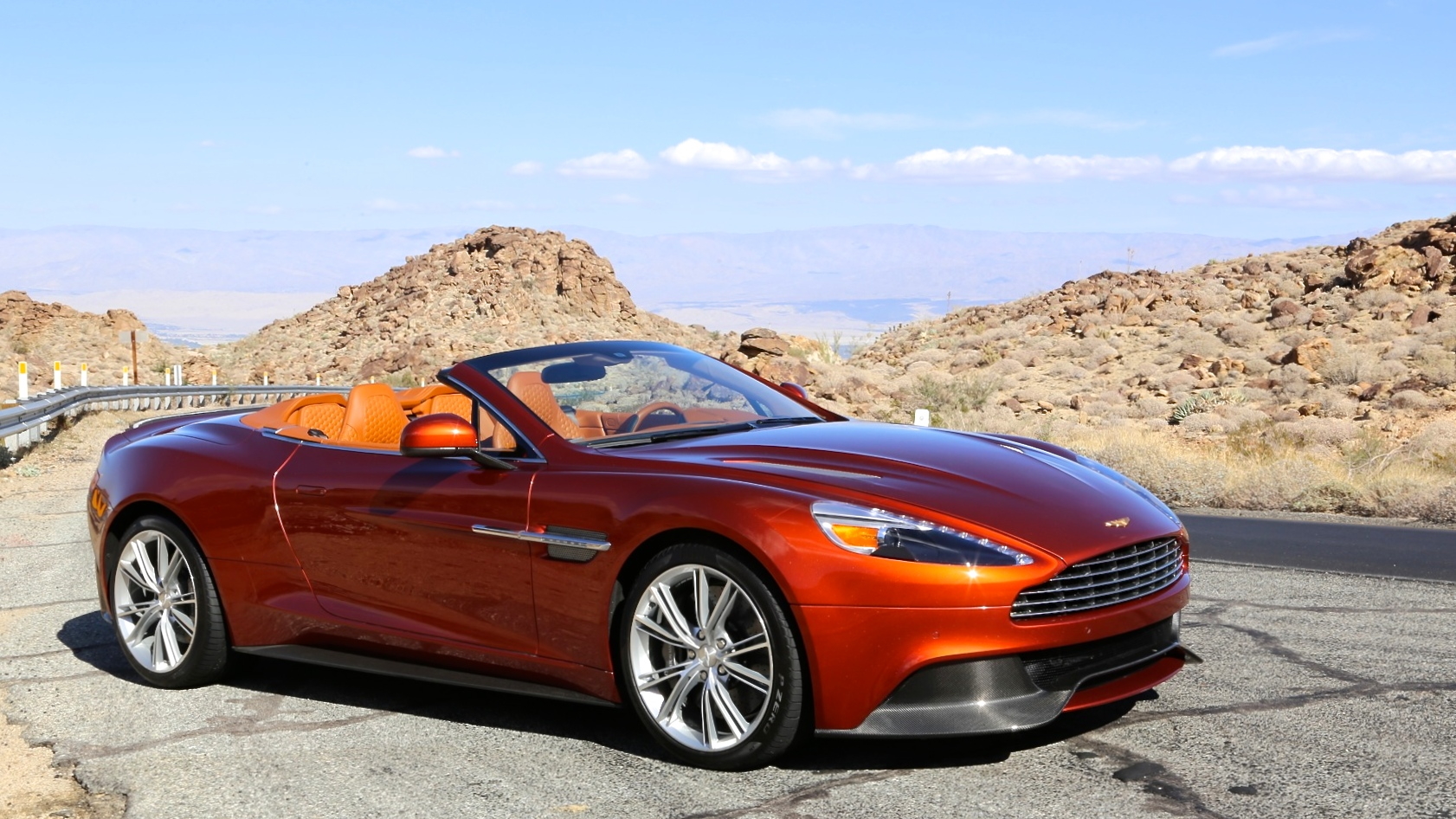 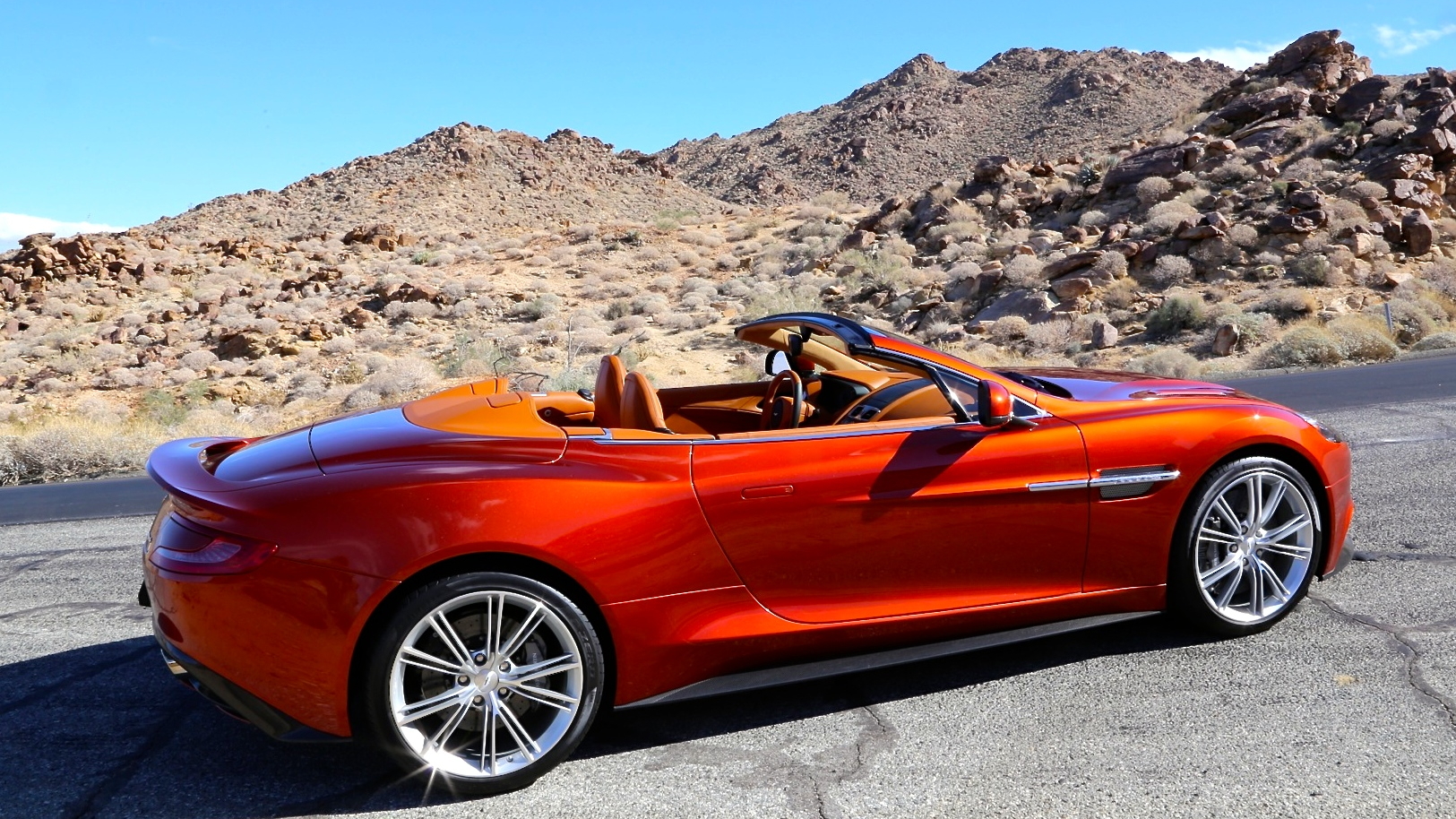 The Aston Martin Vanquish Volante is probably the sexiest car in the planet--the Internet says it is so--but what good is it in winter? If you're in the third of the country currently buried under a soul-crushing blanket of ice and snow, the only transportation you really want right now is a tauntaun with a DNR and a death wish.

Of that practicality, the Volante's sunnily ignorant. What it innately understands: elevating your spirit, sharpening your senses, rocketing around the radiant canyons south of Palm Springs, deflating Corvette egos and stirring hives of Beemers with a brazen flash of carbon-fiber curves and a hormonal exhaust rasp on speed dial.

The Volante really is special--forget the soft, denuded sense of the word and how it's recklessly applied to unremarkable outcomes and reunion tours with equal weight. The Aston's exquisitely styled, impeccably observed, and with the top lowered, effortessly suave.

None of this is a surprise, is it? We drove the Aston Vanquish coupe and got most of the story, but in an altered state. British roads, British weather. An unreal performer nonetheless.

If anything, the convertible Vanquish Volante has ten times the intoxicating effect. Strange how removing a roof can transform so many cars: the SLS AMG GT finally makes visual sense, the Continental GT turns concours-ready.

The Volante Vanquish? It simply grows even more seductive, pulling all the eyeballs down along its artful carbon-fiber body panels. Paint it sunset orange, lower the lid, view it from the back corner, then agree: we Americans draw muscle cars as a burlesque. The British style them.

They power them more awesomely, too. Listen to the guttural noises coming from that V-12 and watch anyone who hears it for the first time. A GoPro mic only renders it in outline form--and even then it's outrageous. In some near future where big engines may be mooted out of existence, we'll have this and the big domestic V-8s and the normally aspirated AMG eight to remember, wistfully. On a brain-stem level, the sounds make the specs semi-inconsequential.

That changes when the road opens in tandem with the throttle. The big Aston's finally in supercar territory, with 565 horsepower, rushing through 60-mph accel runs of under 4.0 seconds with NFL intensity, drilling away toward a 183-mph top speed. Its automatic six-speed feels custom-tailored for public roads, shearing off some of the still substantial bulk (it's there, despite carbon-fiber panels) with rapid-fire shifts.

Dynamically, it's a big car that knows a good hustle. A three-mode adaptive damper setup and carbon-ceramic brakes don't betray any major quirks, and if the steering's not as clearheaded as in a Boxster, who cares? Porsches are commuter cars at this price point.

There aren't just 565 reasons the Volante commands a price just a whisker shy of $300,000. Slide into a quilted leather seat, let the crystal key fob slip in and out of your fingers clumsily a few times, fingerprint yourself for the authorities on its new touch-sensitive control stack--the sensuality doesn't stop at the haunches.

The leg room certainly does, though. The back seat barely holds an Igloo cooler. Better to take Aston up on the offer, and delete them.

That way, there's no pretense you'll have to share much of anything with the Volante, not its supple Luxmill leather, not the top-drawer Bang & Olufsen audio, not the still somewhat squirrelly nav system (it's lots better, but still wanting for more than a knob input). You won't even have to share any retirement investments if you keep going for the Neiman Marcus Christmas edition, at a very cool $344,500.

Even at that price, the Volante's sound relief from the noose of winter. Removing its top only amplifies its reason for being--and yours.

Or would you rather be the stuffing in that tauntaun turducken?