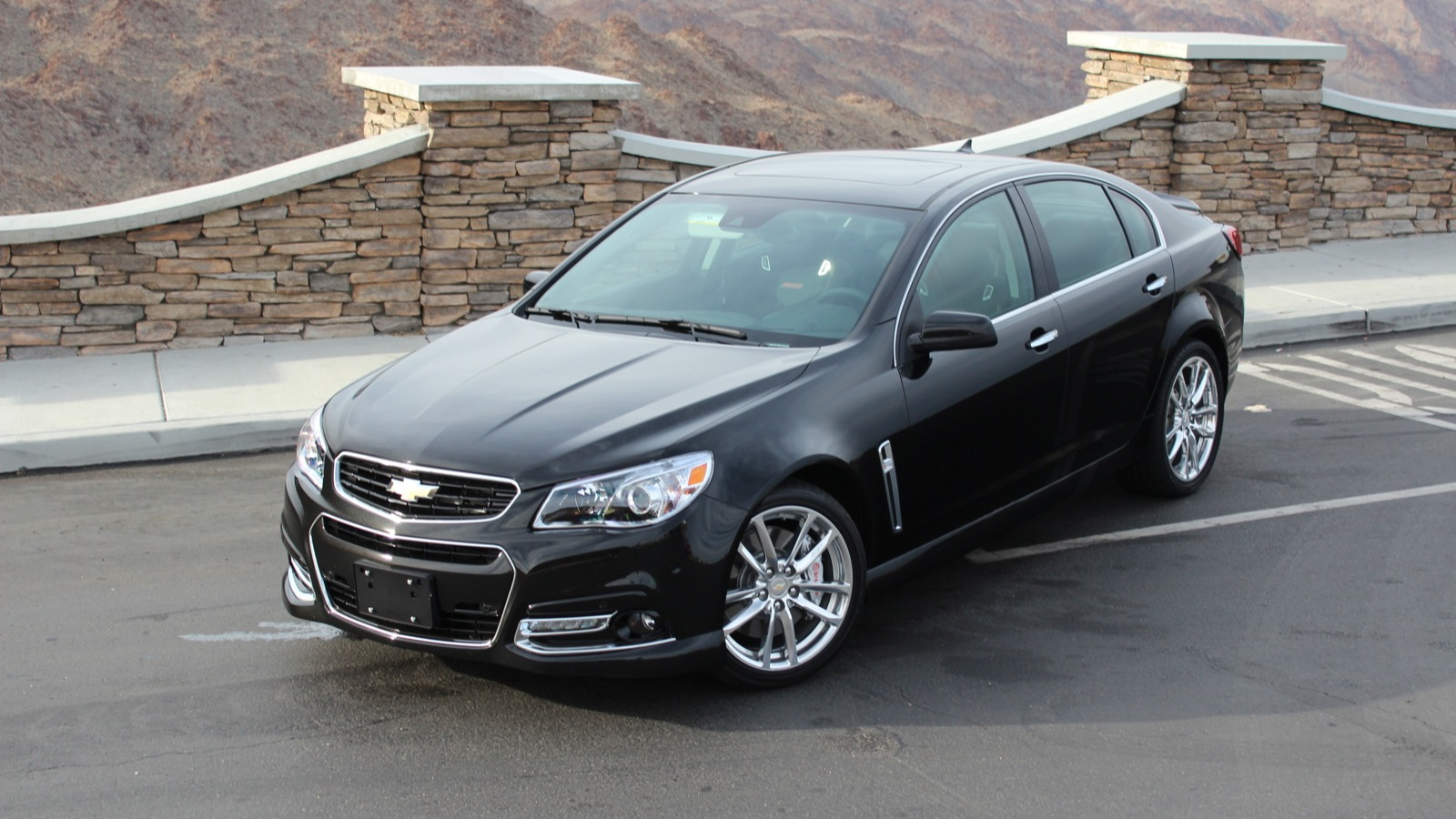 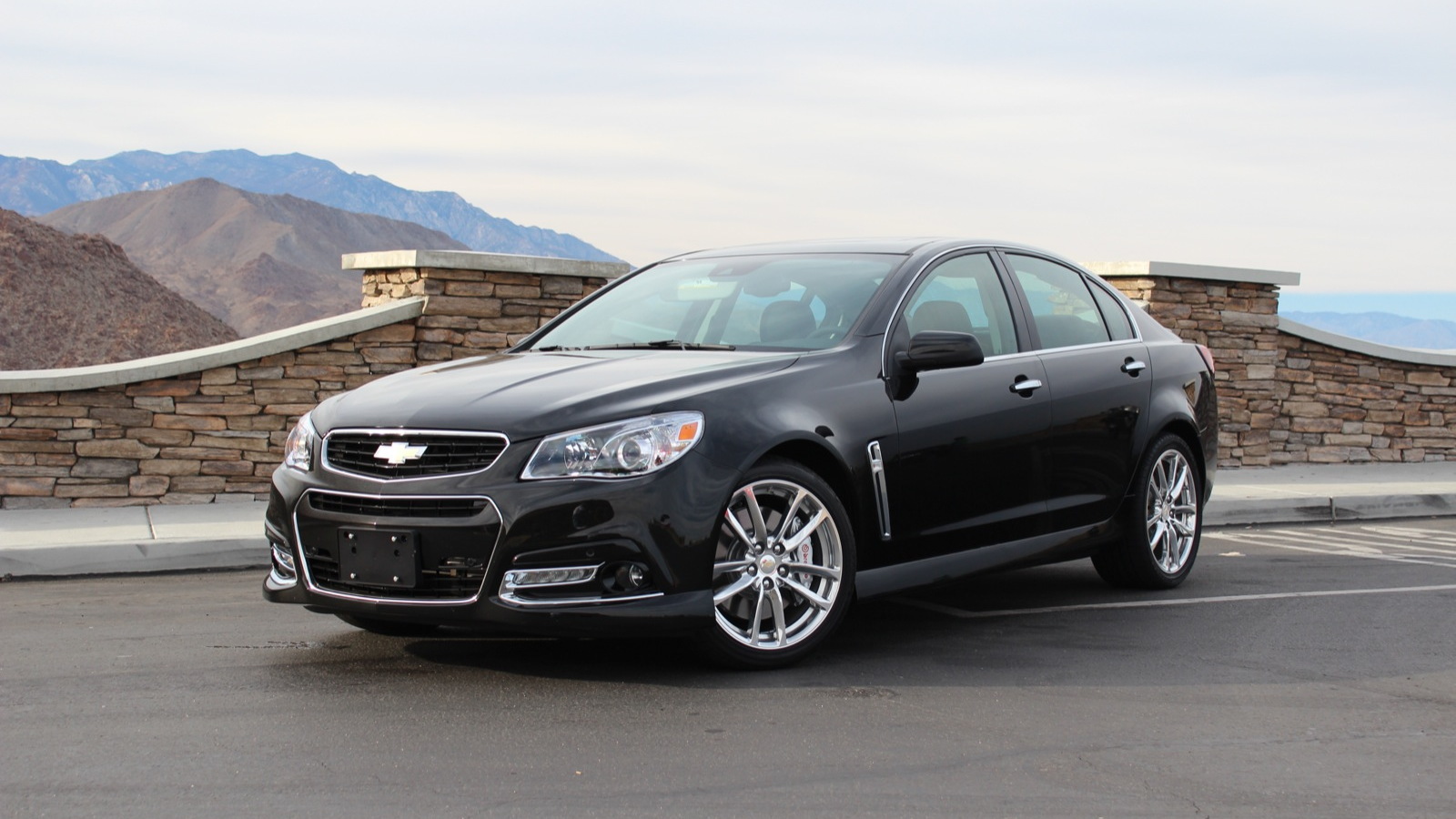 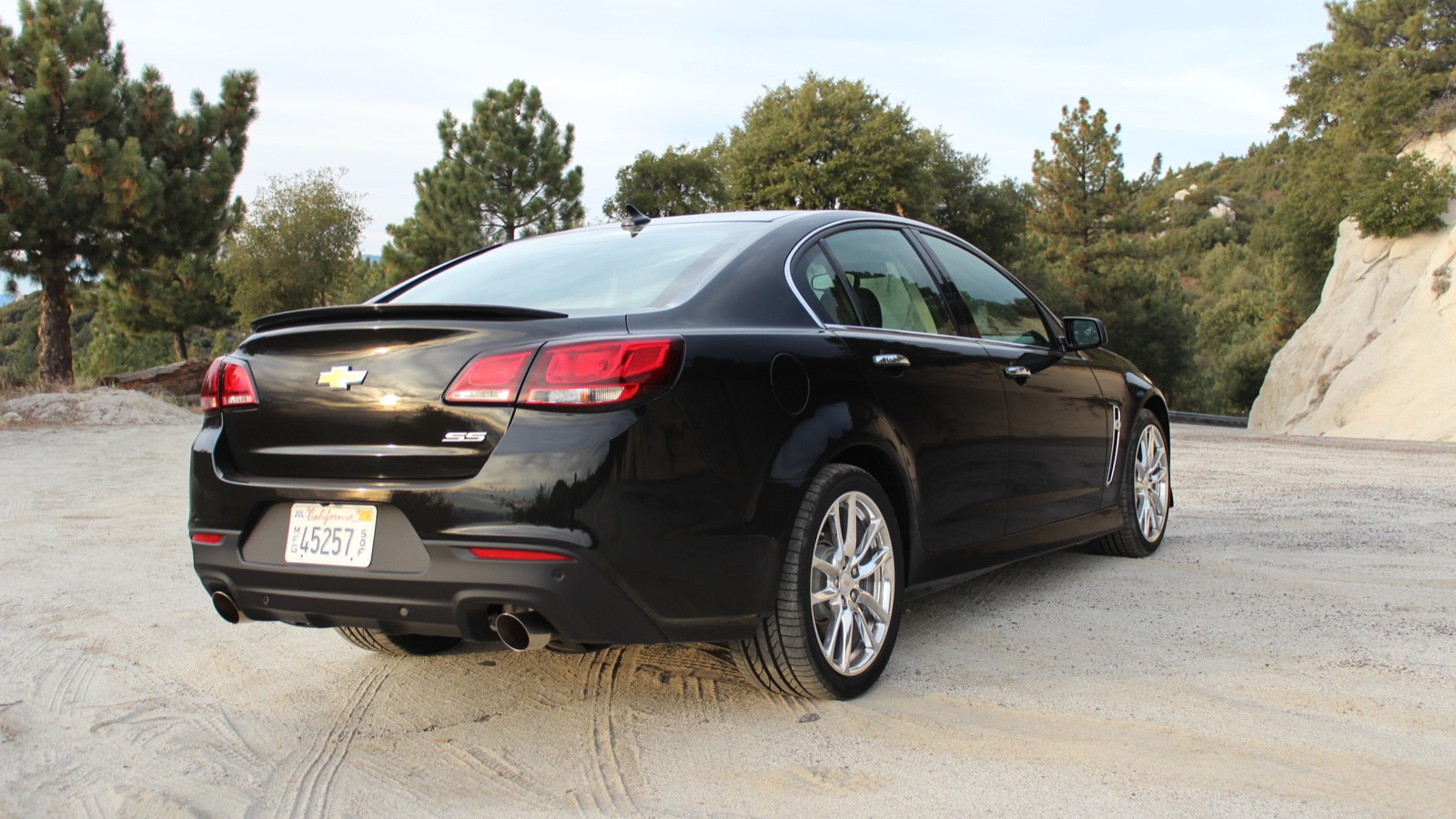 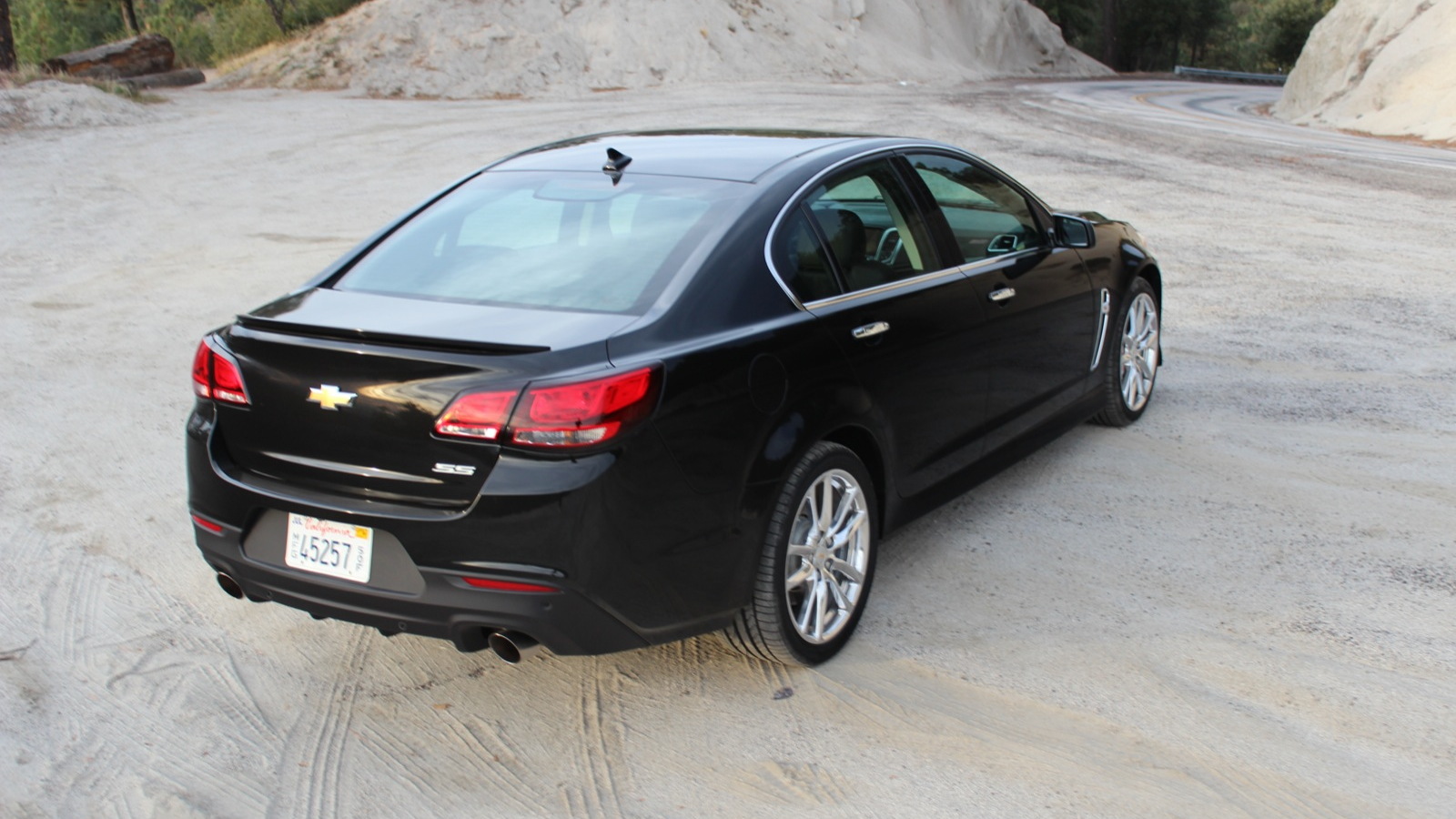 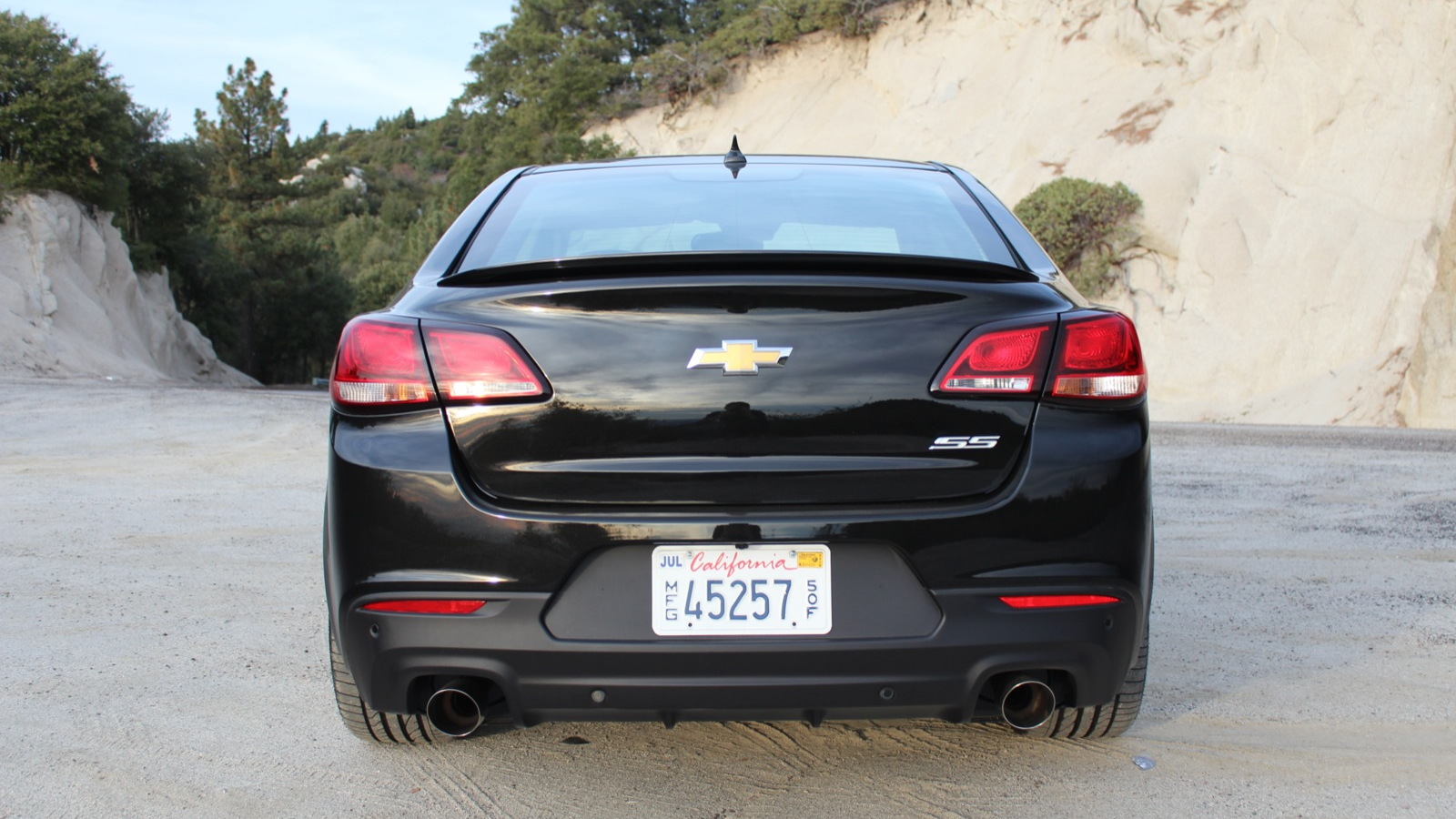 If your exposure to Chevrolet performance cars has included recent versions of the Camaro and the Corvette, be forewarned: The new 2014 Chevy SS might have familiar firepower under the hood, but it's a distinctly different, more understated car in nearly every other respect.

Here's a rear-wheel-drive, mid-size sport sedan that packs a huge 415-horsepower, 6.2-liter 'LS3' V-8—the base engine from last year's Corvette—and all the right hardware upgrades to make the most of it.

By that gauge, it has some true sport-sedan credentials. To call it a four-door Camaro would be an insult to this car's expert chassis tuning; just don't expect it to feel too much like a Cadillac ATS or CTS with a few frills removed.

As we found out this past week, from the driver's seat, the SS convinced us that while it's not that, it's definitely more than a four-door pony car. It's a lot more in fact, and it deserves to be on the same stage not just with the likes of the Dodge Charger SRT8 and Chrysler 300 SRT8 but also perhaps with the Jaguar XFR, BMW 550i, and Infiniti M56 (now Q70).

As mainstream as the bow tie on the grille is, the SS is a fringe product. In the U.S., Chevy sells more than 400,000 Silverados, around 200,000 Malibus, and more than 80,000 Camaros annually—and in the ballpark of 15,000 Corvettes a year. Yet it's only anticipating selling a few thousand Chevrolet SS models per year.

Before we get too far into what makes the SS such a great sport sedan, we have to address the gorilla in the room: The SS is bland; it's mired in anonymity; and to pound one more nail in, it's really not as eye-catching, inside or out, as the all-new Impala that reached dealerships this year. And that factor will really limit the SS's appeal, we think.

It's what's inside that counts

Which is too bad, as the SS is quite a beautifully executed car—if you can see beyond the plain face. The SS might as well stand for Sleeper Sedan, as it's one of the best smokin'-fast under-the-radar four-doors ever…of the sort that, if you can keep your right foot light on the accelerator when you're cruising past patrol cars or through small towns, you'll likely roll through unnoticed—as what to the uninitiated might just as well be some kind of rental car or fleet vehicle.

Back in Australia, where the SS is assembled, that might not be the case. The SS is a thinly veiled, only somewhat restyled and rebadged version of the Holden Commodore SS V, the latest flagship in a long line of cars that are worshipped by Aussies the way we bow to Mustangs and Camaros.

It’s also worth noting, by the way, that the SS is not just a new version of the Pontiac G8 GXP—a car that was based on the previous ‘VE’ iteration of the Holden Commodore. In a separate post, we outline all the differences—and they’re significant.

From the driver's seat, the new SS is just enough of that sleeper sedan it is on the outside, but definitely an extrovert at heart. On a variety of suburban, mountain, and desert roads around Palm Springs, California, the SS would feel at ease on most daily commutes, yet it’s dynamically rewarding in nearly every way you’d expect—and a true performance model.

It's pretty impressive given how the SS doesn't have any tricks up its sleeve in the way of multi-mode steering, an adjustable suspension, or even dual-path/adaptive dampers. It's just been really well calibrated—with the goods to take on serious driving roads, yet just enough comfort for those in areas with relatively good road quality.

The big 6.2 [can we call it the SS 376?] has loads of tire-smoking torque on tap from a standstill, with the right bassy bellow to match—and a crackling intensity at higher revs—but thanks to a nice, linear throttle feel you can take off in a careful, controlled manner if you want. It also permits you to roll neatly onto the accelerator out of corners to not upset its balance. And on that subject, we also appreciate how when you manually select gears, the transmission will hold higher gears even if you floor the accelerator (or summon a downshift as soon as it's within the rev range when slowing down).

The only disappointment with the fundamentals is with the transmission, which doesn't have the performance coordination and finesse of the rest of the powertrain and chassis and feels fit for a comfort car, not a performance sedan. There's a long (almost one-one-thousand), delay to downshifts after you click the left side. Stomping my right foot to the floor in Drive seemed to order up a downshift faster than at part throttle with the paddle. Ratios feel very tall with the included 3.27 final drive, as well.

Transmission aside, the SS is presented in a convincing way for enthusiastic—even track—driving, with Brembo front brakes that include four-piston actuation and two-piece rotors and calipers (rear brakes are solid discs). The weight distribution is nearly 50/50 (52/48); and the center of mass is kept low thanks to an aluminum hood and deck lid, among other things. Forged 19-inch aluminum wheels help set a strong stance and are shod in staggered-width Bridgestone summer-performance—245/40ZR19 in front, 275/35ZR19 at the rear.

Curb weight, at 3,975 pounds, is on the hefty side, so it's certainly not overweight relative to the competition; yet one of the first impressions as the road tightens and you push faster is that you're throwing a lot of weight around.

Part of the blame is that the tires have a dramatic difference in grip from cold to hot. For the first few sharp corners, they’re vocal and dramatically...lacking. But after properly warmed up they’re noticeably sticker while also feeling far more confidence-inspiring and progressive—allowing some pretty fluid driving and far more neutral, fun behavior than the cold tires initially suggest. All the while, the stability control system here also let’s you have fun with it to a reasonable degree and doesn’t get in the way.

By the way, Chevy recommends Blizzak2 winter tires for those in the Snow Belt, and we think those a little farther south will want to go for that too.

The steering wheel itself was a peeve of both me and my co-driver. It’s very thick—impractically so, we think. And the so-called TAPshift paddles for manual control feel more like wobbly buttons on the back of the steering wheel than satisfying paddle-shifters. But we do like the rack-mounted electric power steering here—a new unit from Korean supplier Mando, co-developed by GM. It loads up nicely, with a hefty but settled feel on center as well.

Colleagues were complaining of a lack of road feel, but I'm not sure what they were expecting (I took the car back out with that in mind). We could even feel a bit of road surface through the steering near the limit, which to us puts it a step above some other sport-sedan steering gear from more prestigious brands. It’s definitely more lively than what’s used in the Dodge Charger SRT8.

Brakes also felt strong—easy to modulate and with a firmer pedal compared to most other GM products. But one of the test cars we drove already had pulsating brakes from a day of hard on-the-road driving, so we're curious how they hold up out on the track.

We really like the driving position; you don’t sit quite as low to the ground as in some other sport sedans, but the up side, combined with the somewhat boxy body, is that you have lots of outward visibility. It was quite possible for this 6’-6” driver to find a position that’s quite upright and yet have plenty enough headroom left.

The SS measures at the long end of mid-size (nearly 196 inches long, nearly 115 inches of wheelbase), yet it's less than 75 inches wide. You can scoot the front seat far back, for as much legroom as a basketball player would want; and provided it’s in a reasonably ‘normal’ position there’ll be plenty of space left for a couple of rear-seat passengers. We can’t imagine fitting three adults across, though.

The trunk is nicer than we expected; it’s nicely finished, with plenty of space for a couple of large suitcases, and there’s a pass-through for longer items.

Some details lacking... Forgivable at half the price of an XFR?

We can say pretty much the opposite for under the hood, though. We were disappointed by the sea of black, semi-glossy injection-molded plastic covering most of what's in the engine bay; it seems like the company would have put a little more into an engine bay that people will want to show friends and neighbors.

As for ride quality, we're going to say that it's simply not as sophisticated as that of most luxury-brand sport sedans today. The roads around Palm Springs are pretty smoothly surfaced, and we did notice that the SS's firm calibration brought some pitchiness over highway patches and heaves. Yet they've done a great job sealing out road and wind noise.

Interior detailing felt great, however, with excellent seats, top-tier switchgear, and a plush suede-like trim for the upper half of the instrument panel. Full Chevrolet MyLink infotainment is included, as well as a long list of active-safety features. The only options are a full-size spare and a sunroof.

In all, the SS is priced at around $45,000, which seems about right based on how we see it fitting into the market. It feels far more athletic than the somewhat lower-priced Taurus SHO and feels more fluid and willing to dance than an almost identically priced Charger SRT8.

The engine in the SS (and its sound) might very well seduce you, too; but it lacks the ride sophistication, the styling, and a transmission that's worthy of the rest of the car's potential.

If you're the kind to be intrigued by the idea of a generally well-tuned, 415-horsepower sport sedan, at a fraction of the price of others with comparable performance—and you might consider the sleeper status an asset—then you must take this one for a drive.