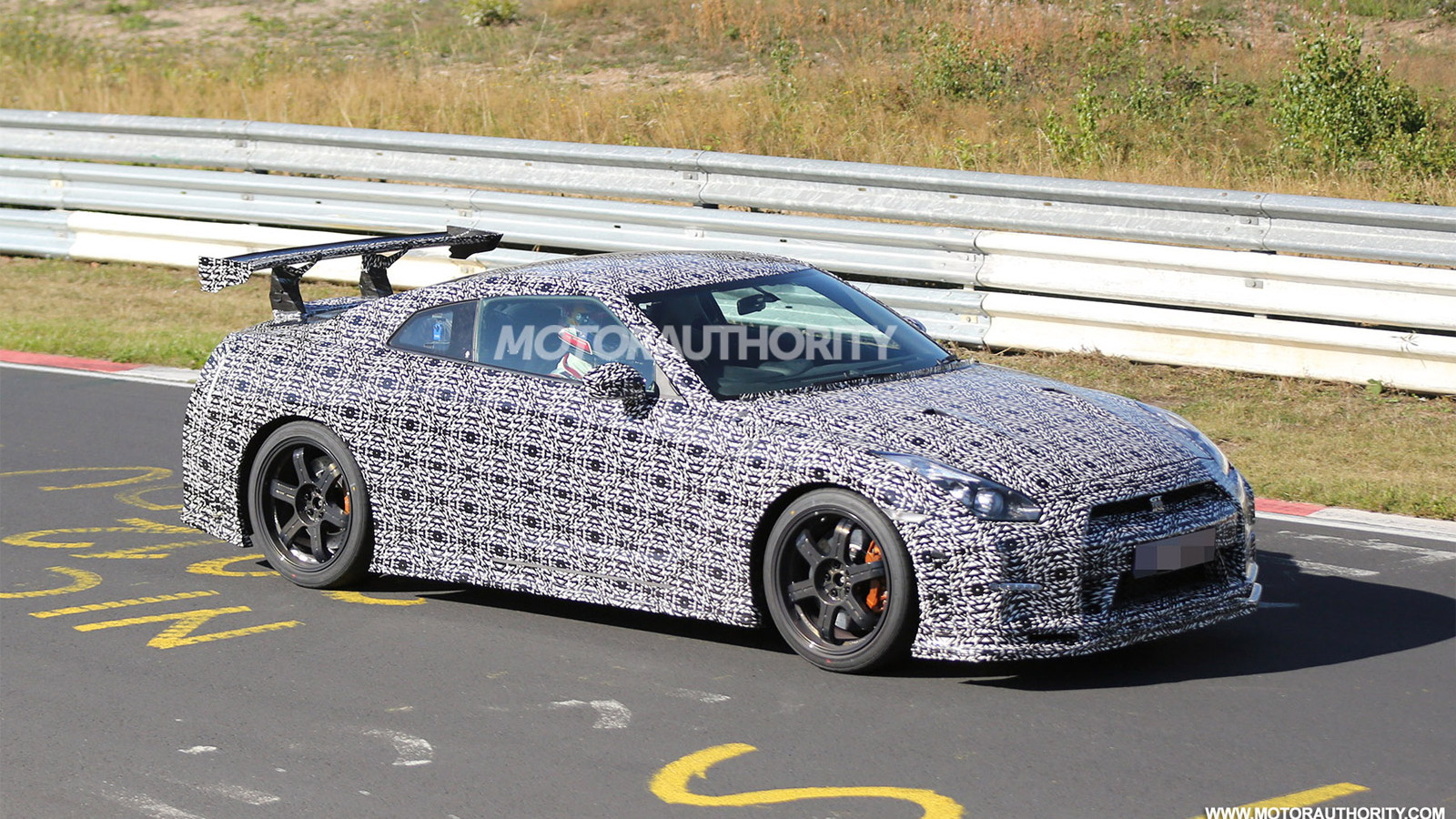 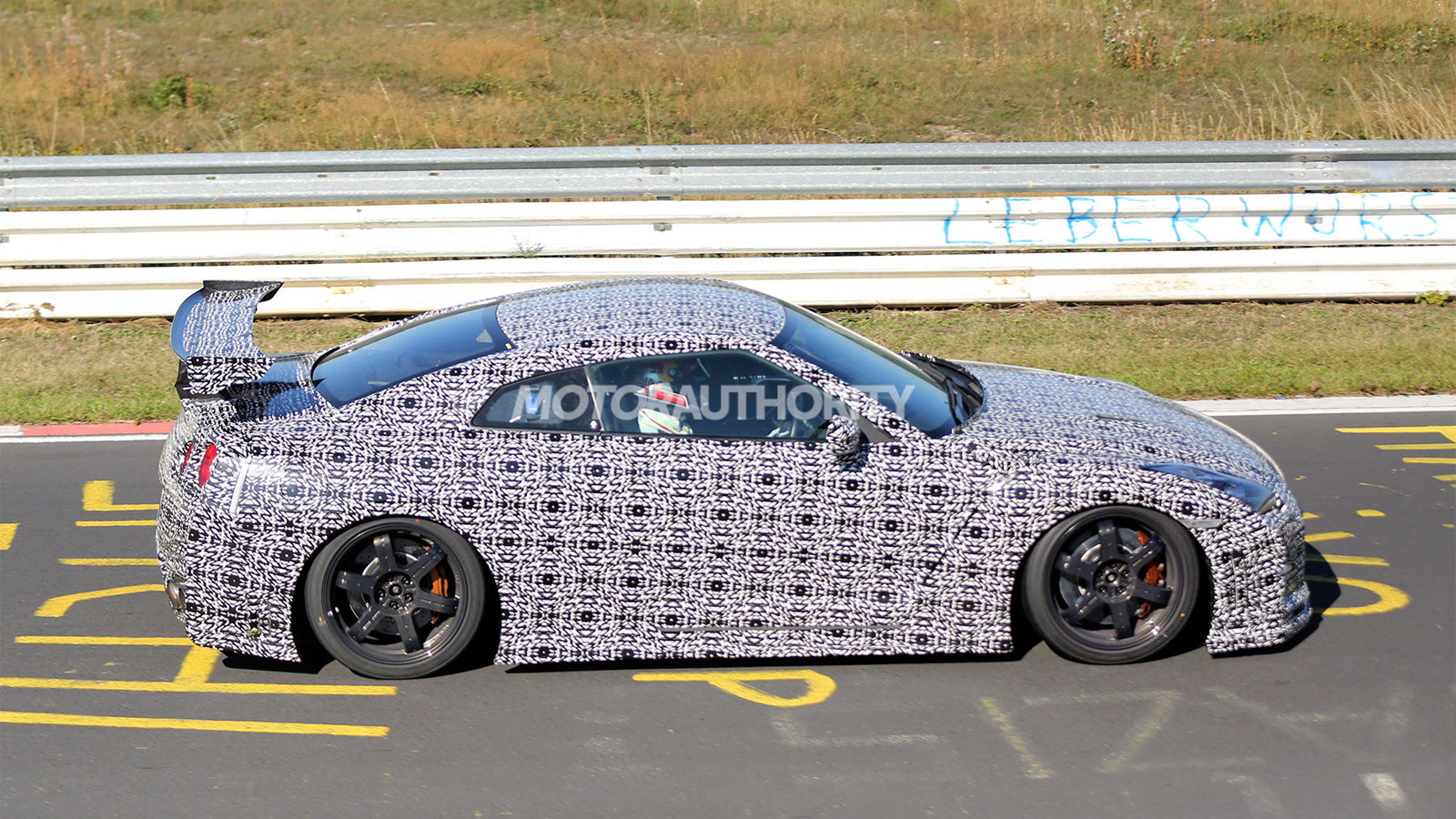 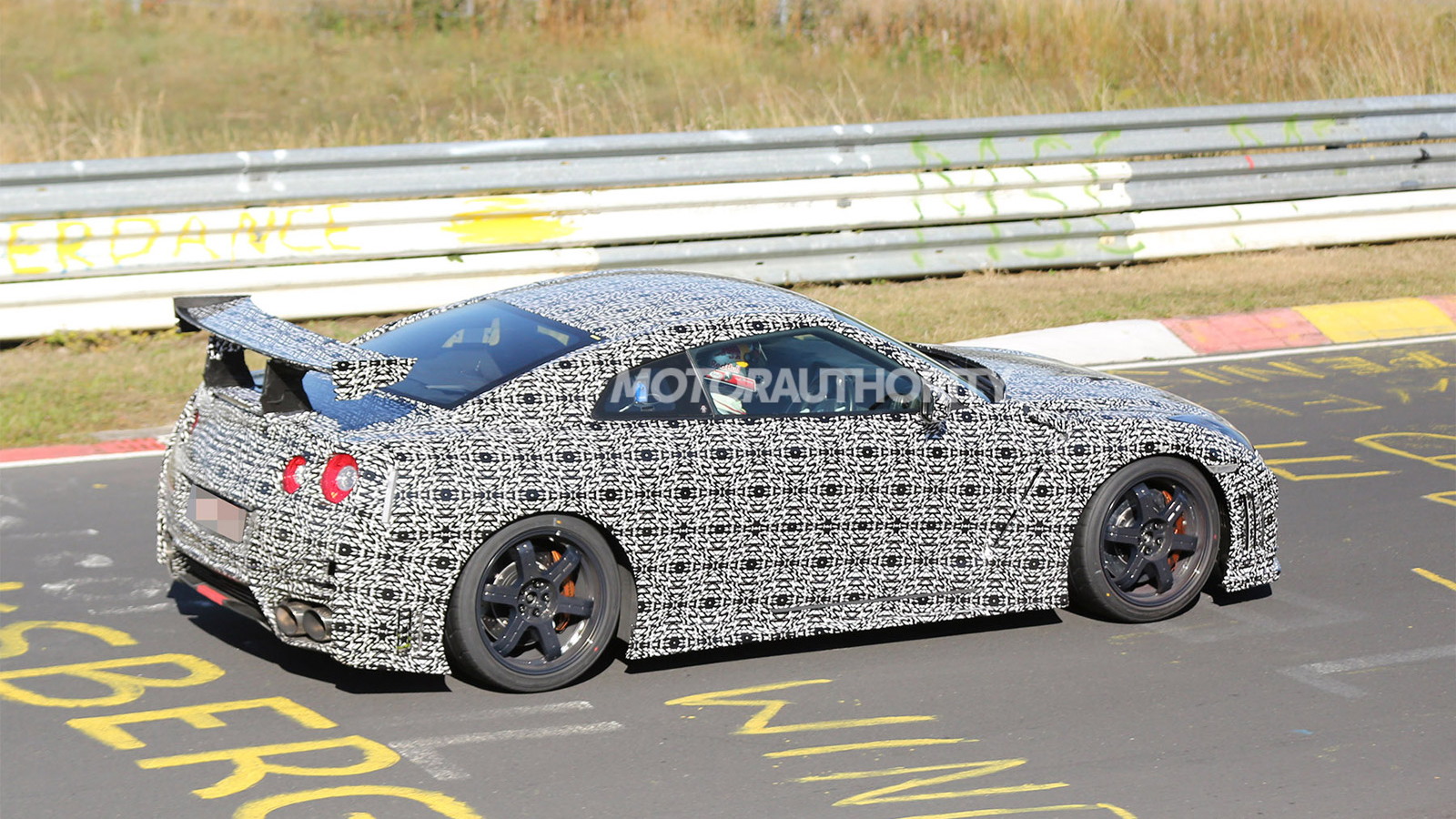 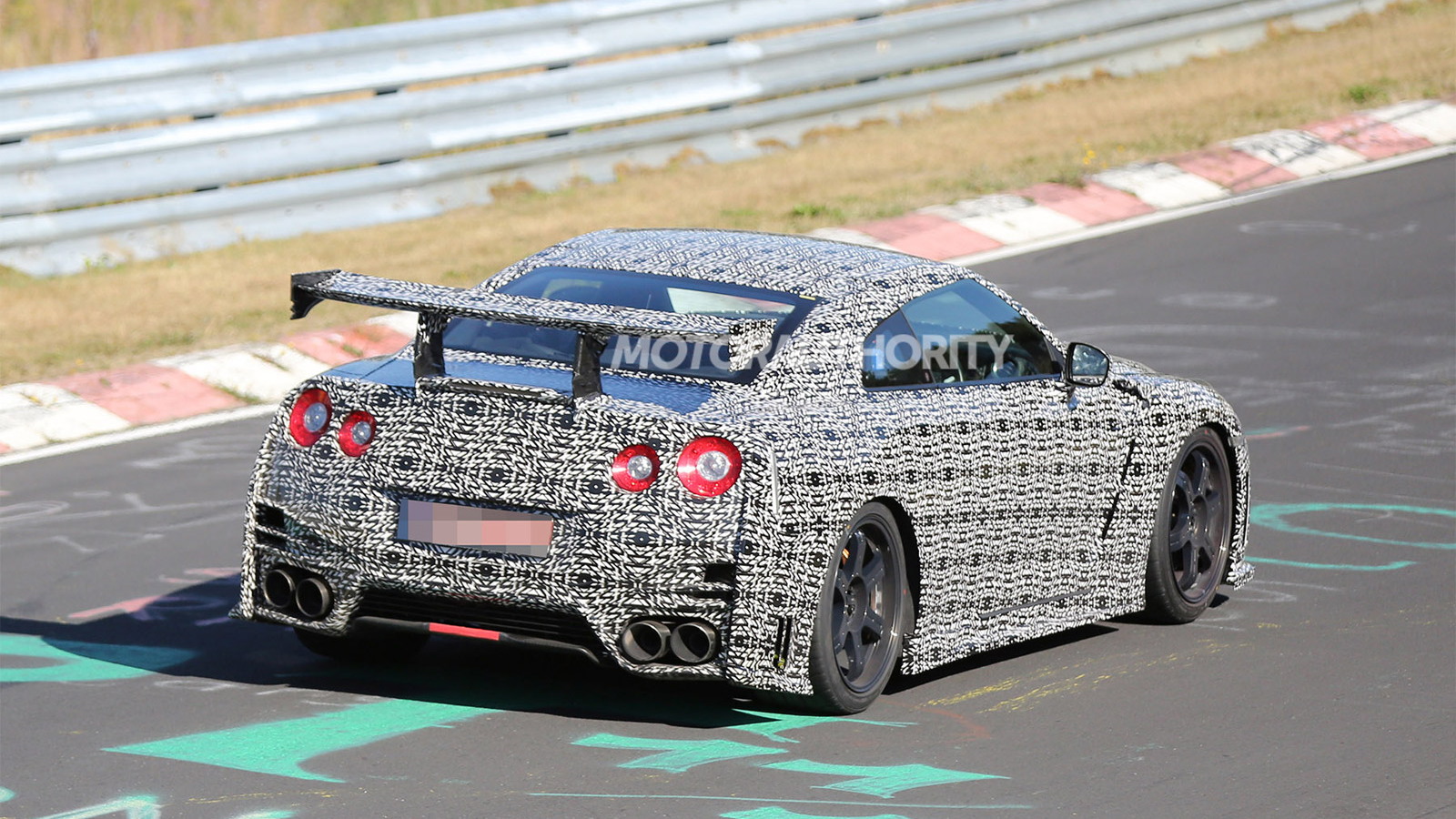 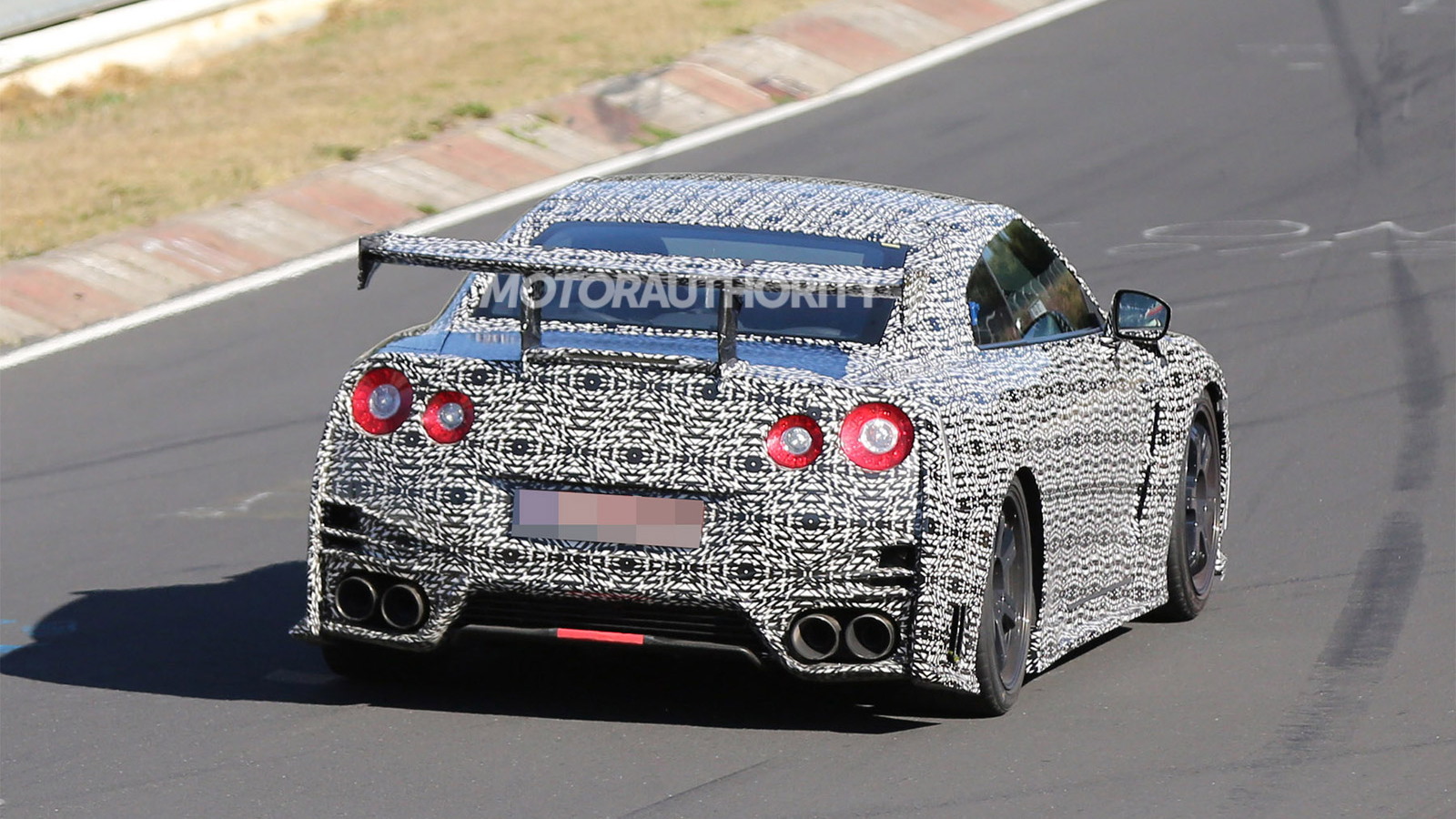 47
photos
Nissan recently confirmed that its next NISMO model will be a more extreme version of the GT-R, and now we spy shots of a prototype of just that car, caught while undergoing testing on Germany’s Nürburgring and some of the race track’s surrounding roads. The GT-R NISMO will be the flagship of Nissan performance partner NISMO and is expected to make its debut at the 2013 Tokyo Motor Show in late November before hitting showrooms next spring, as a 2015 model.

Helping with the car’s development is none other than the Williams F1 Team, well, the team’s technology offshoot, Williams Advanced Engineering. Their area of expertise is aerodynamics, simulation and material science (read advanced composites).

A massive GT wing is seen in some of the later shots and there are also new spoilers located around the car. Engineers have also added new intakes at both ends and it looks like the exhaust tips are new.

Lighter weight and improved aerodynamics will be key to the car’s performance. NISMO product chief Hiroshi Tamura describes the aim of the GT-R NISMO project as being the pursuit of “pure” performance. Look for a stripped-out cabin, carbon fiber panels and plenty of handling mods. Nissan can even be seen benchmarking the car against Porsche's 911 GT3, one of the most hardcore road-going cars around.

However, there will also be a healthy boost to power levels from the car’s twin-turbo V-6. The 2014 GT-R is producing 545 horsepower but this GT-R NISMO is tipped to have more than 570 horsepower and be capable of setting a new production car lap record at the Nürburgring (the GT-R’s current ‘Ring time of 7:18:6 is outmatched by cars like the Gumpert Apollo Sport, Lexus LFA, Dodge Viper ACR and the current record holder, Porsche's 918 Spyder). In this initial round of testing the prototype has already achieved a sub-7:30 lap time, according to onlookers.

The GT-R NISMO has even been reported to be capable of accelerating from 0-60 mph in a mindboggling 2.0 seconds, faster than any production car in history, though the actual figure is more likely to be a Bugatti Veyron-like 2.5 seconds.

Nissan has also said the GT-R NISMO would draw on lessons learned from racing the GT-R in various motorsport categories around the world, particularly in GT3 competition. In fact, Nissan’s GT-R NISMO GT3 race car is said to have directly influenced the aerodynamics package of the new model as well as the chassis.

Look for the car’s six-speed dual-clutch transmission and suspension to have had significant work done. The car looks to be much closer to the ground than the regular GT-R, suggesting a very aggressive tune for the suspension. The wheels, brakes and exhaust are also NISMO-specific items.

We’ll update the story as development progresses and stay tuned for the 2015 Nissan GT-R NISMO's full reveal in the coming months.