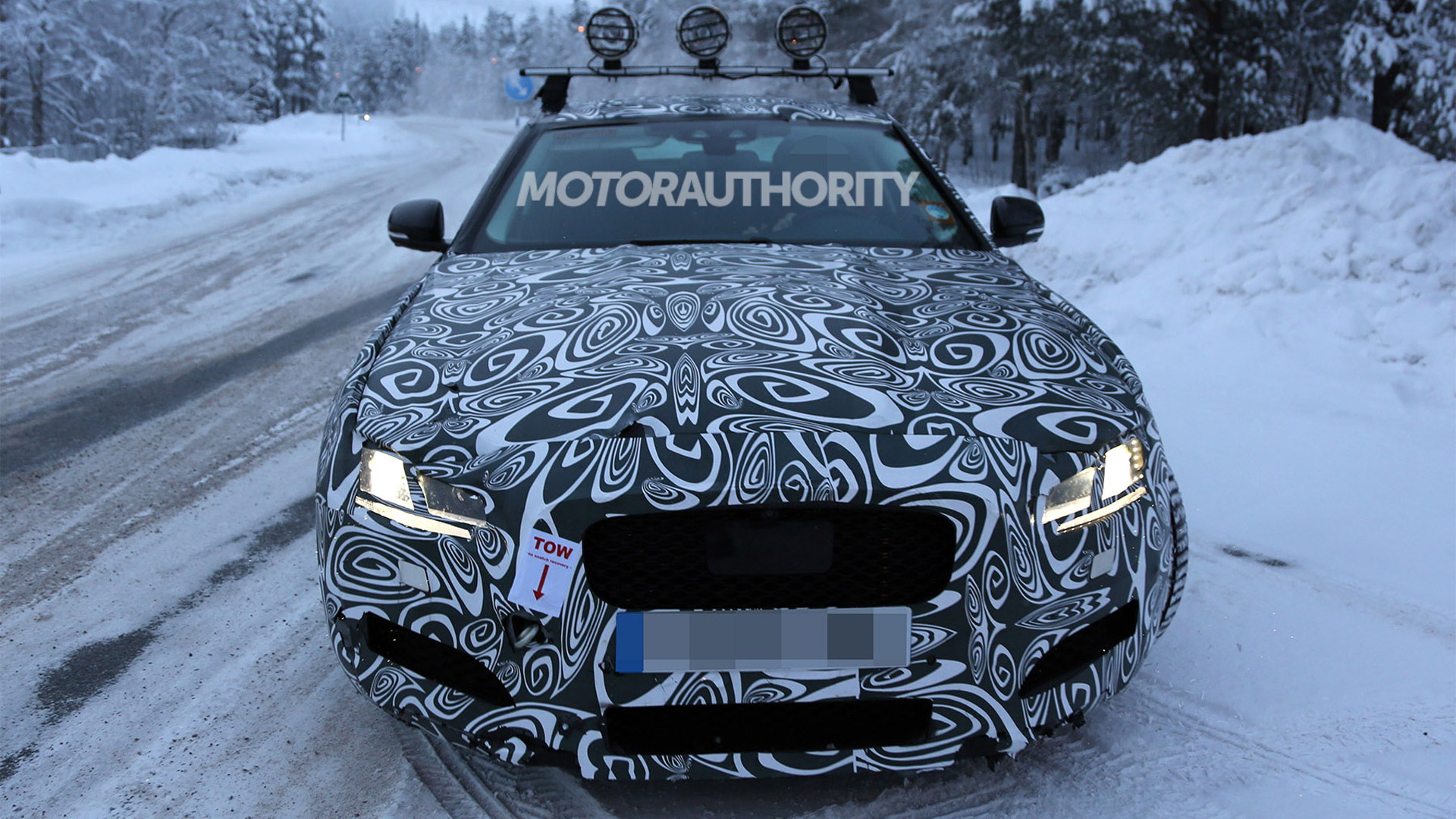 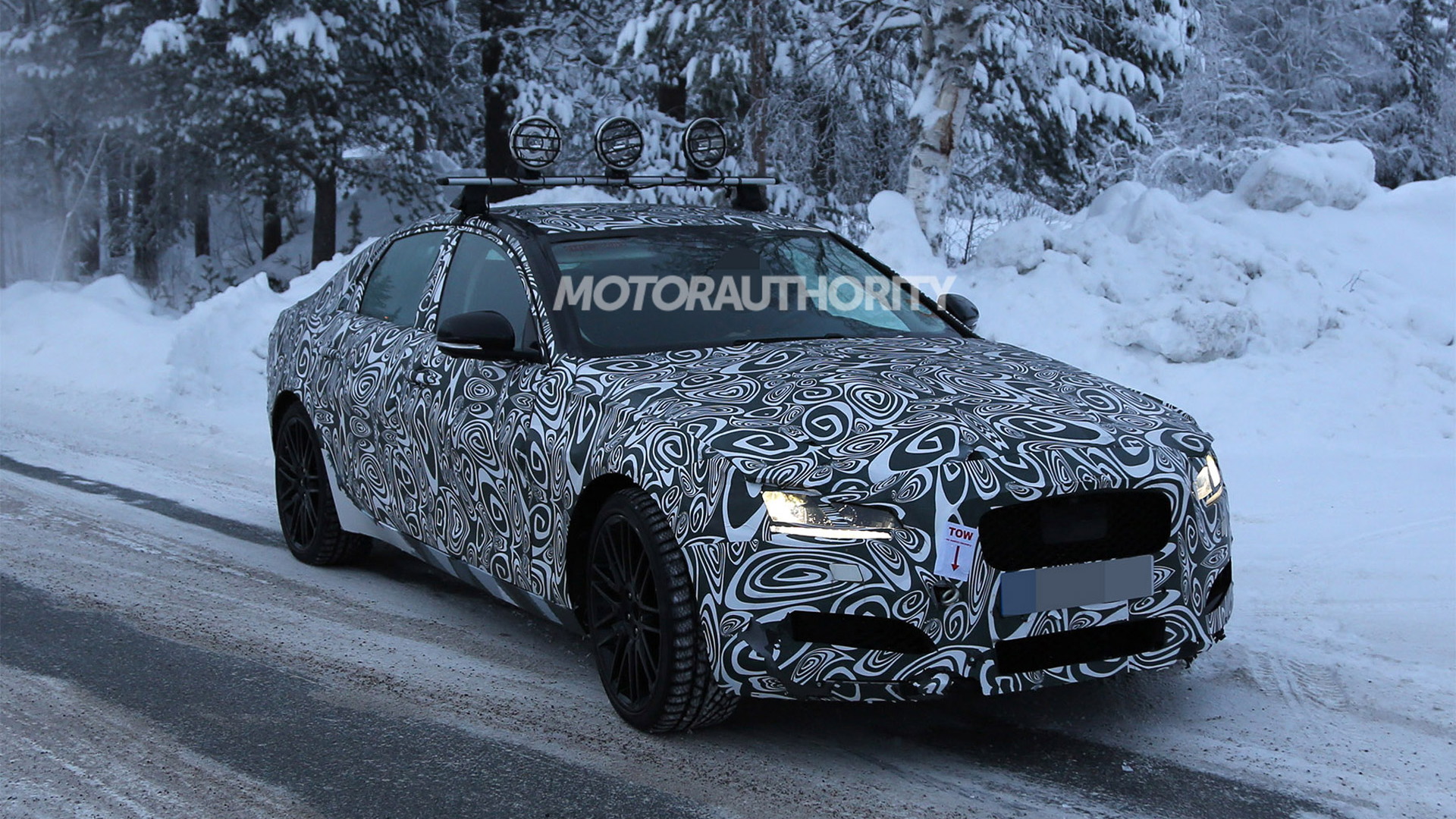 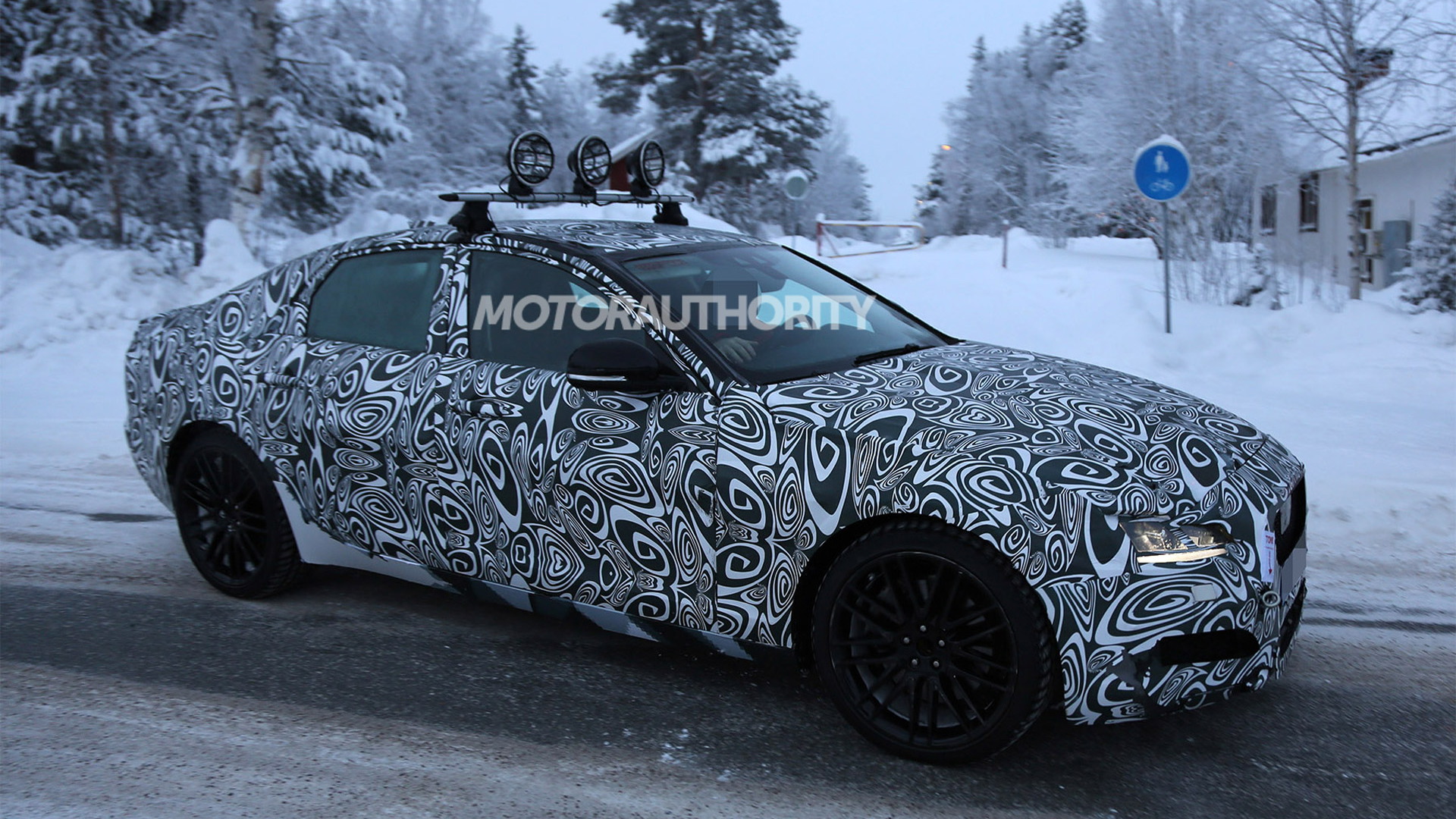 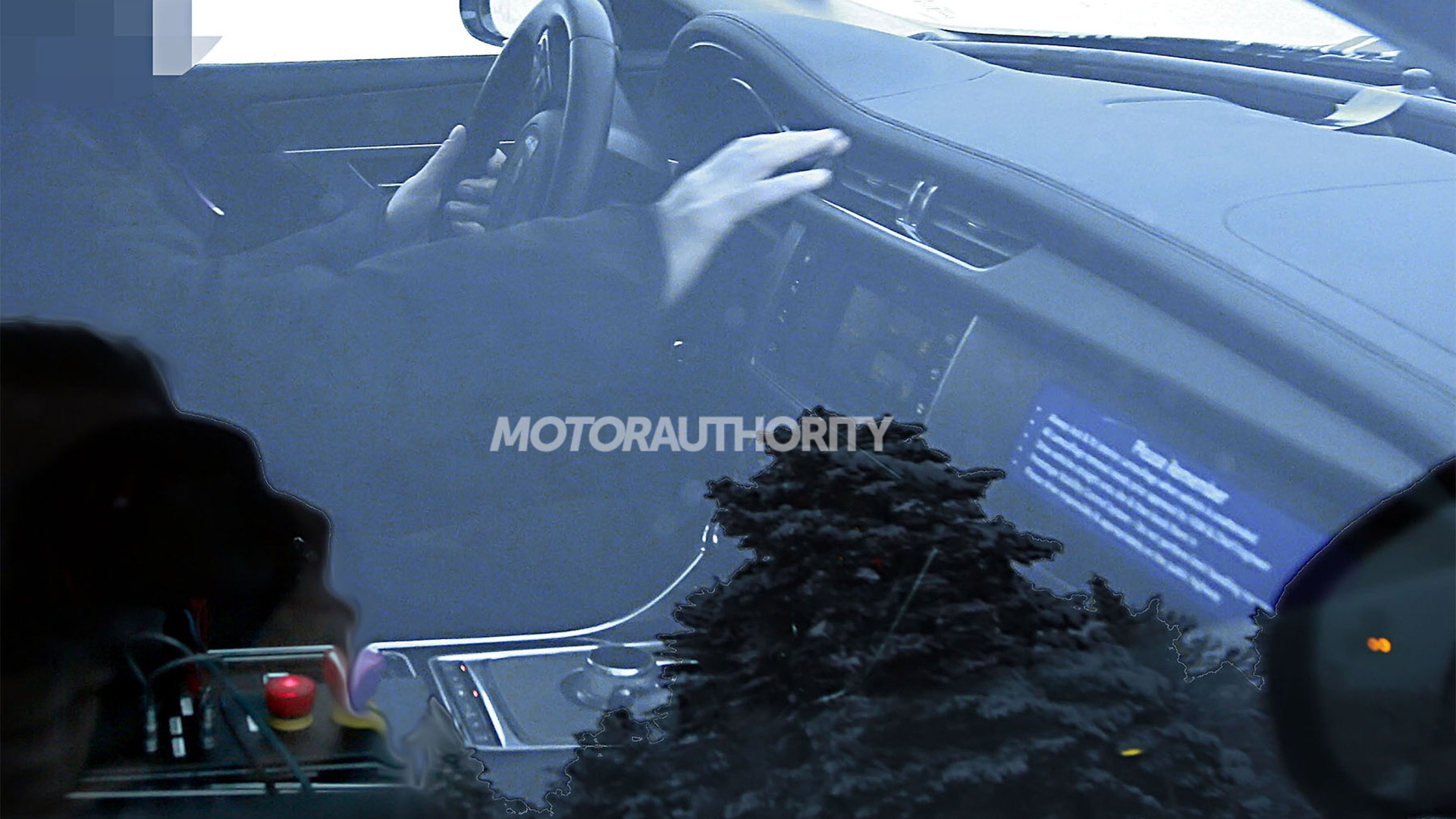 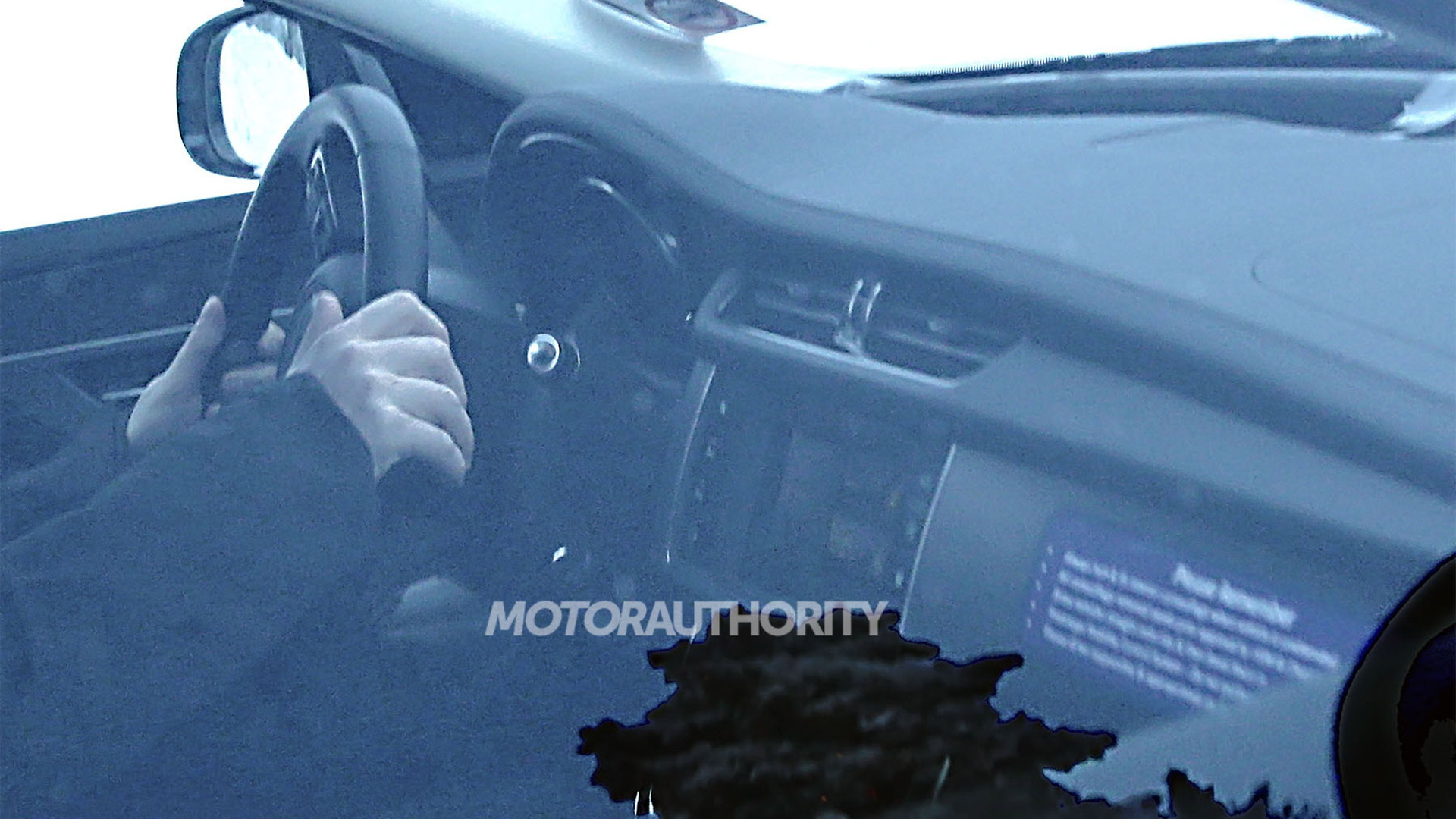 50
photos
Jaguar’s next-generation XF sedan has been spotted testing once again, this time wearing the sheet metal and lights of the final production version. Earlier shots showed the car as a test mule, with the new mechanicals hidden beneath the makeshift body of the current XF. The current XF made its market debut in 2009 as the replacement for the S-Type. It was given an update for 2012 and a year later saw all-wheel drive added to its list of options. The next major update sees the XF completely redesigned, both inside and out.

Yes, while the current XF traces its roots to the DEW98 platform of former parent company Ford, underpinning the new XF is a stretched version of the aluminum-intensive iQ[Al] platform previewed in the C-X17 crossover concept at the 2013 Frankfurt Auto Show. This platform will form the basis of several future Jaguars including the 2017 XE small sedan and the recently confirmed F-Pace crossover (the production version of the C-X17).

The new XF’s proportions are similar to those of the current model, though the front track has been widened slightly. And compared to the smaller XE, the new XF has a less steeply raked rear window and longer rear overhang. A shot of the interior reveals a design very similar to the one in the XE but with unique air outlets.

A turbocharged 2.0-liter four-cylinder from Jaguar Land Rover’s Ingenium engine family will be the base option while a 3.0-liter V-6, most likely supercharged, will be the volume option going forward. Though Jaguar is considering a future without V-8s, the new XF should still offer an eight-cylinder engine at launch. All-wheel drive will also remain an option.

Further down the track, we’re likely to see a new XF Sportbrake wagon and even a high-performance XF SVR to succeed the current XFR-S. The latter will likely stick with a supercharged 5.0-liter V-8, possibly with as much as 575 horsepower on tap. It’s also possible a new hybrid variant will be launched to ensure the XF matches similar offerings from Jaguar's German rivals.

A debut of the new XF is rumored to be taking place at the 2015 New York Auto Show in April, which means we could see the car in showrooms by the following fall. Stay tuned for updates in the meantime.