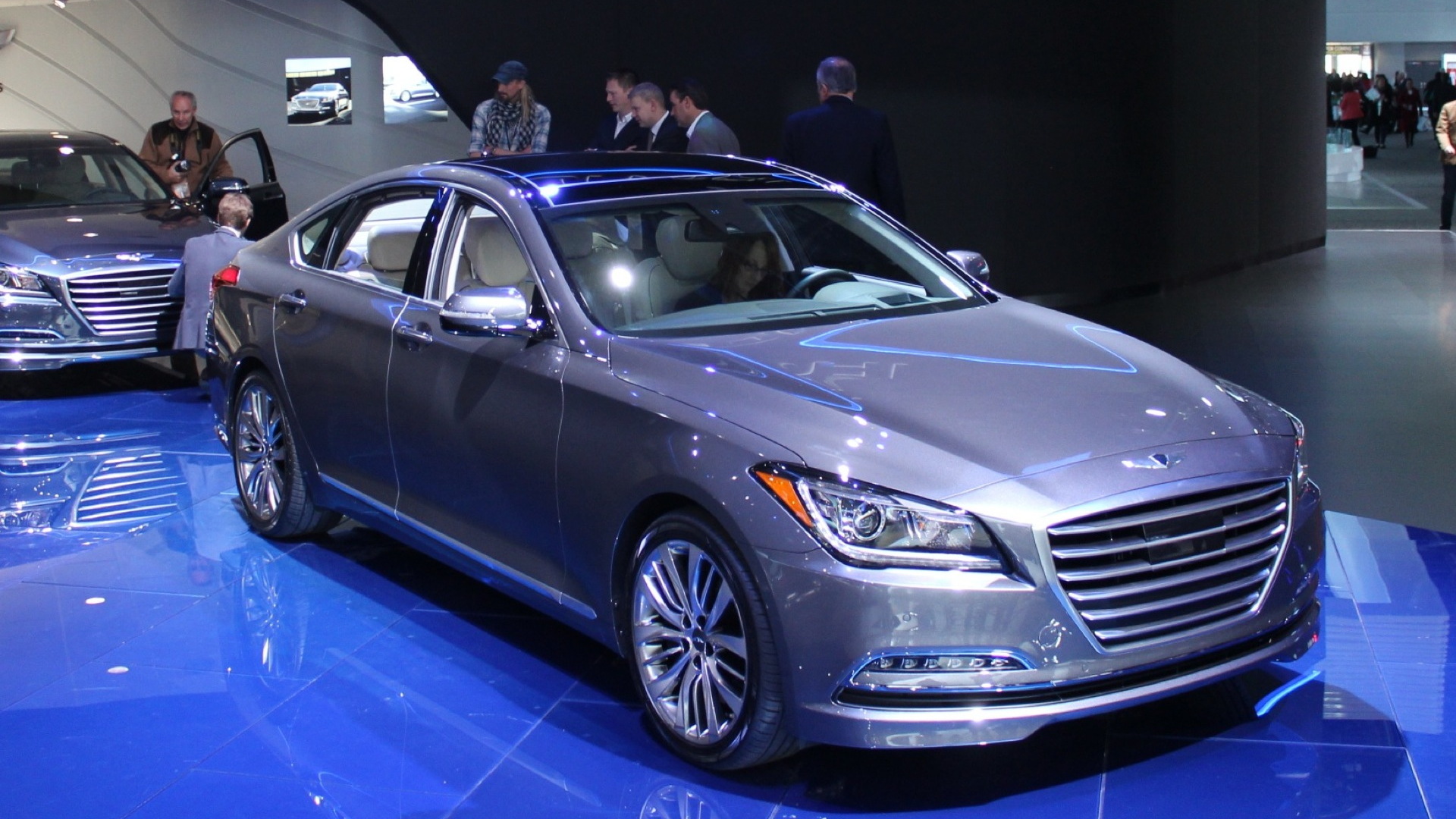 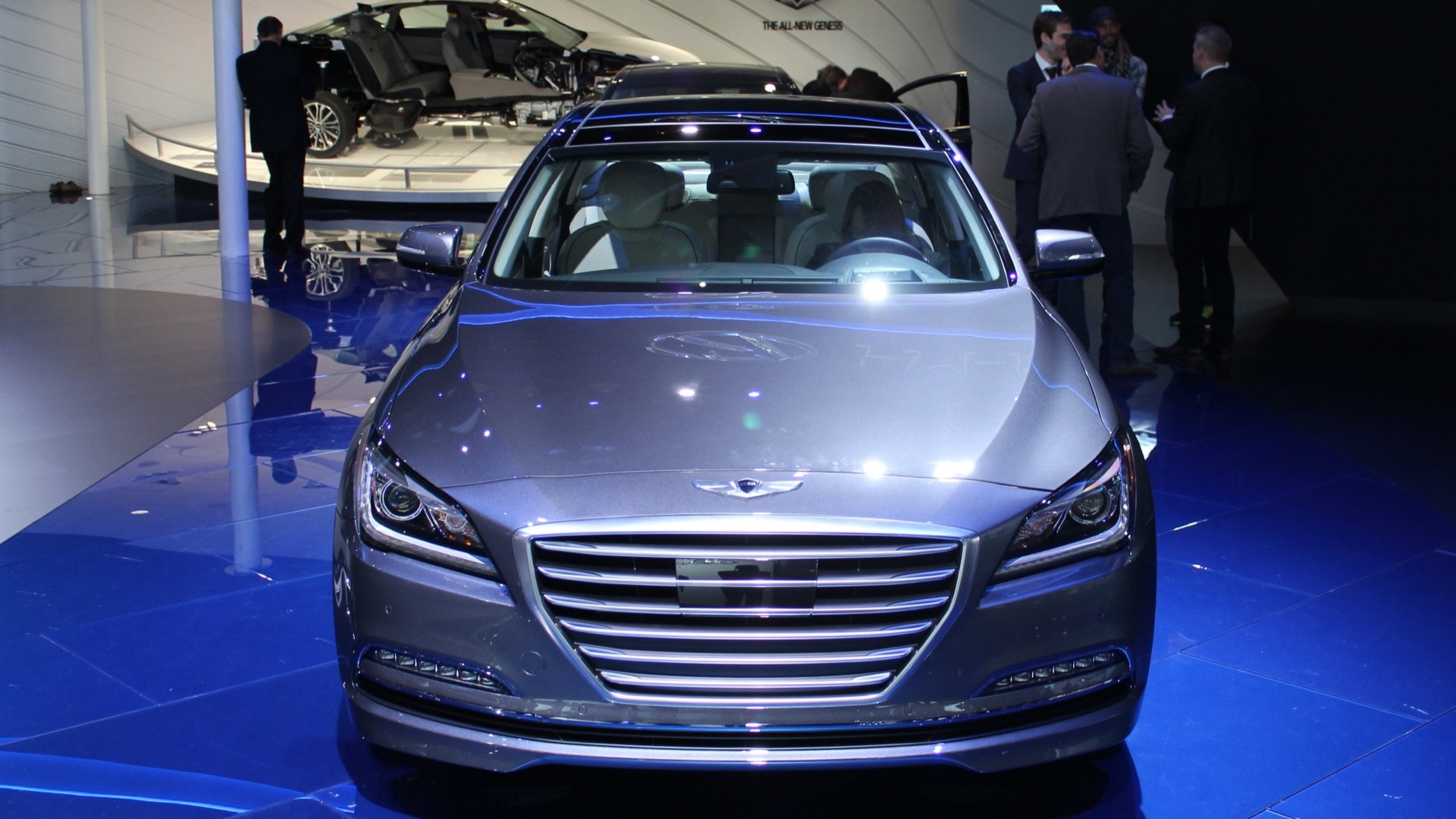 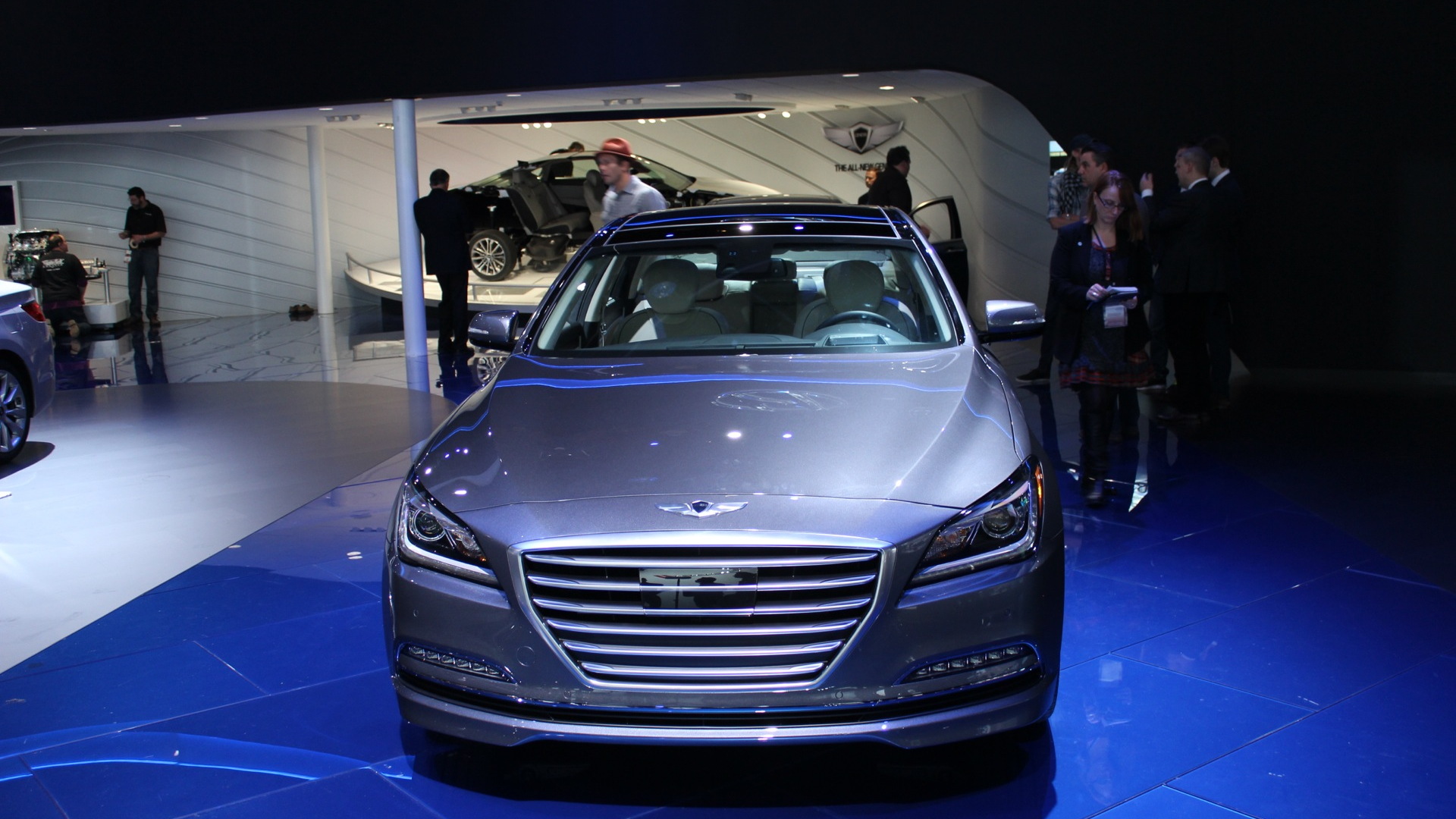 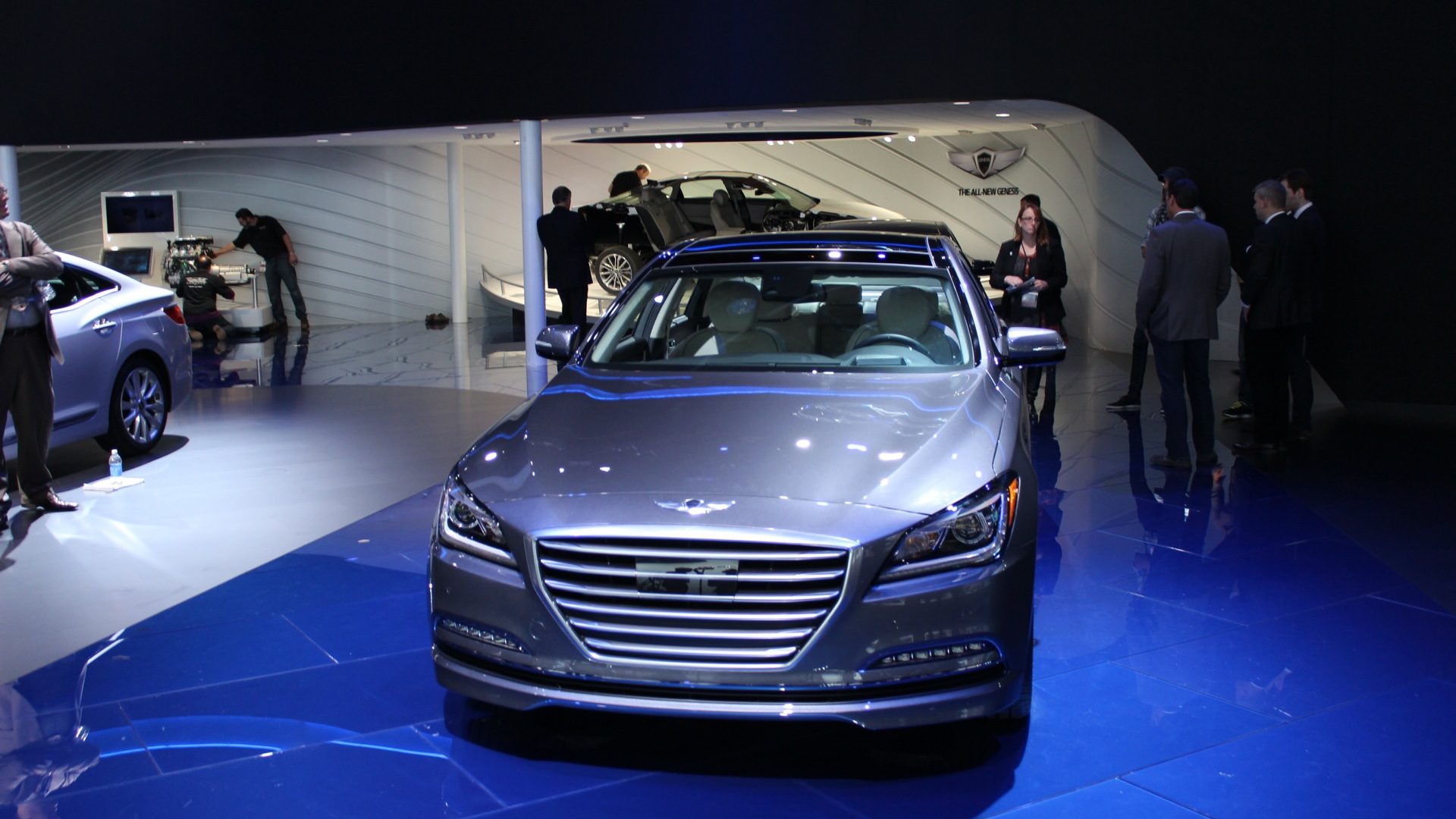 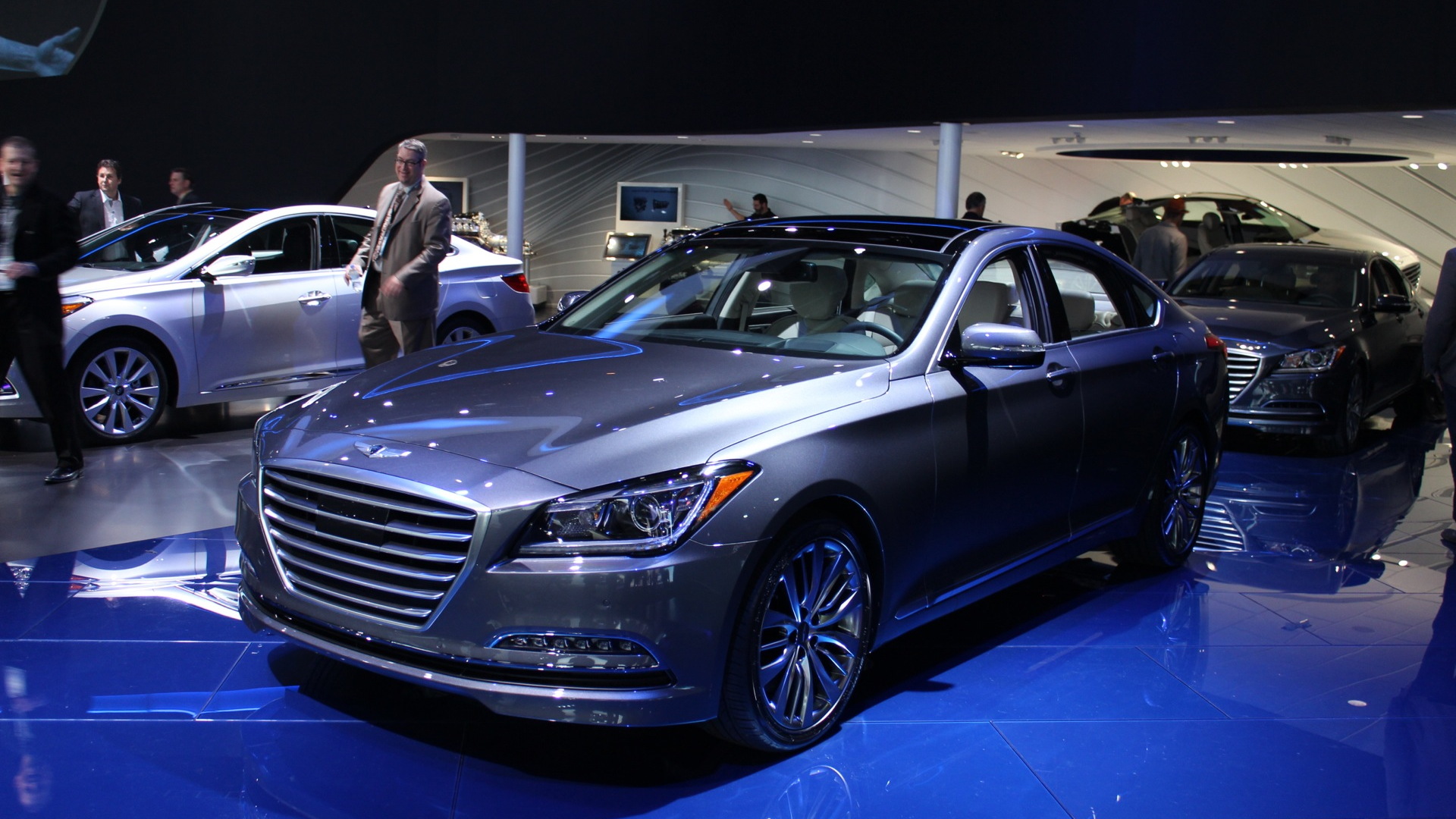 51
photos
The all-new 2015 Hyundai Genesis sedan was shown to an international audience for the first time this week, and we have photos and a video direct from its debut which took place at the 2014 Detroit Auto Show. The 2015 Genesis has been redesigned from top to bottom and now features an available all-wheel-drive system and a chassis tuned with help from Lotus.

The car has also taken on an elegant new look, which marks the first interpretation of the automaker’s evolved Fluidic Sculpture 2.0 design language. The new design language is described as combining elements that are fluid, modern and premium; the next interpretation will be an updated 2015 Hyundai Sonata due later this year.

The 2015 Genesis certainly shows a departure from Hyundai’s current themes, particularly for the grille, which adopts an Audi-style single-frame design. As for the dimensions, the vehicle stretches 16.37 feet in length, has an overall width of 6.2 feet and an overall height of 4.85 feet. In particular, its wheelbase was extended almost 3 inches to 9.87 feet to add extra space to the cabin.

For the interior, materials are more refined than in the outgoing Genesis and the switchgear simplified. Total interior volume is an impressive 123.0 cubic feet, which is more than in rivals such as the Lexus GS and Infiniti Q70.

The big news is the introduction of a second-generation Blue Link interface, which was previewed at the recent 2014 Consumer Electronics Show. The new interface features a destination search powered by Google, a custom assistant app, Apple’s Siri-powered Eyes Free mode and Google Glass integration among its list of functions.

The custom assistant app is called Genesis Intelligent Assistant and combines Blue Link features with data from the vehicle, the owner’s smartphone and the internet. For example, by providing commute information and access to their smartphone’s calendar, owners can have the app automatically estimate appropriate departure times and send reminders for any upcoming appointments that require a drive. There are also vehicle health status reminders, outside temperature notifications and low-fuel warnings with recommended gas station suggestions.

Drive is sent to the rear wheels or all four when Hyundai’s new HTRAC all-wheel-drive system is installed. HTRAC electronically controls torque split between the front and rear wheels and offers drivers a number of modes that can tailor the level of torque sent to either axles.

Extensive testing of the 2015 Genesis took place at Germany’s Nürburgring, and the dynamics experts at Lotus Engineering were called in to further validate the performance capability of the car. Lateral suspension stiffness and overall ride comfort were made a priority during development.

As a result, the fully independent, multi-link front and rear suspension have revised geometry and increased stiffness compared to the outgoing Genesis. Under rolling conditions, the improved tilting angle of the tire enables a better tire grip compared to the previous model.

In the safety department, the 2015 Genesis features nine airbags as standard and a suite of active driver safety technologies dubbed Sensory Surround Safety. This system can automatically apply the brakes if its sensors detects a collision is imminent; provide lane departure, blind spot and cross traffic warnings; and offers an emergency steering support mode where things like the suspension and electronic stability control are primed for an emergency manoeuvre. A head-up display is also available.

Hyundai says its 2015 Genesis will be priced below $40k when sales commence in the spring. The outgoing model has a starting price of $35,095.

Further down the track, a new generation of the Genesis Coupe will be launched. This model was previewed by the stunning HND-9 coupe concept revealed in 2013 and should be arriving on the market in the next couple of years.