The 18th annual Amelia Island Concours d’Elegance is set to take place on Sunday, March 10, and we’ve seen enough of the featured cars to know that founder Bill Warner will be producing another exceptional event.

One of the more influential cars to be displayed this year is Edsel Ford’s Boattail Speedster, perhaps the first Ford product to be based on European design trends. Edsel Ford was a frequent visitor to Europe, which he referred to as “the continent,” and he was enamored with European sports cars.

In 1932, Ford tasked designer E.T. “Bob” Gregorie with creating a “long, low and rakish continental car,” which would ride on a 1932 Ford chassis and rely on a new Ford flathead V-8 engine for power. Its body was crafted of aluminum by Ford’s in-house aircraft division, and the final product was exactly what Edsel Ford had envisioned.

Two years later, Ford requested a second open-air Speedster from his designers. Though this car is perhaps better known, its bug-eyed front end isn’t nearly as elegant as the original Boattail Speedster. Nonetheless, Ford kept both cars until his untimely death, at age 49, in 1943.

The “continental” name had staying power, however, and Ford used it for the first time on an all-new Lincoln model in 1939. Like Edsel Ford’s original Speedster, the first Lincoln Continental featured a long hood and flowing fenders, and its design was praised by Frank Lloyd Wright as “the most beautiful car in the world.” 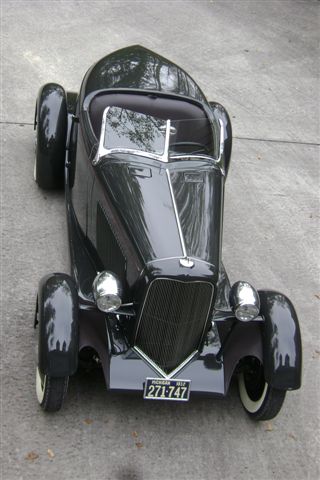 The current owners of Edsel Ford’s Boattail Speedster, Jim and Bonnie Gombos, spent some five years restoring the car to its original glory. As a further homage to Edsel Ford, the car was even sprayed in “gunmetal gray,” reported to be Ford’s favorite color.