';
If all you know about Lincoln automobiles comes from what you’ve seen in its dealer showrooms over the past two decades, it would be easy to write the brand off as a pseudo-luxury automaker reselling badge-engineered Fords.

The demise of the Mercury brand was supposed to clarify the line between mass-market vehicles, sold under Ford’s blue oval, and luxury vehicles, sold under the Lincoln marque. Today, however, nearly two years after the last Mercury was built, Lincoln still seems to be a brand looking to establish itself.

At today’s Los Angeles Auto Show press preview, Lincoln pulled off a bold move that it hopes will speak volumes about its future. Instead of using up real estate to promote current products like the MKS sedan or the MKT crossover, Lincoln opted to roll in six design classics from its storied history, and display them alongside the new MKZ sedan.

The classic cars included a 1929 Lincoln L Dietrich Convertible Coupe, which sported a greyhound hood ornament and came with a 90-horsepower V-8 engine; a 1932 Lincoln KB LeBaron Convertible Roadster, with its coach built body and V-12 engine; and a pair of 1937 Lincolns including a Derham Sport Sedan and Lincoln-Zephyr Coupe-Sedan.

Also shown was a 1940 Lincoln Continental Cabriolet, the first car to carry the famous nameplate and described by Frank Lloyd Wright as “the most beautiful car in the world;” a 1956 Continental Mark II, a hand-built car that debuted Lincoln’s four-pointed star badge; and a 1961 Lincoln Continental Sedan, the first to carry rear “suicide doors” and a crome-trimmed upper shoulder line. 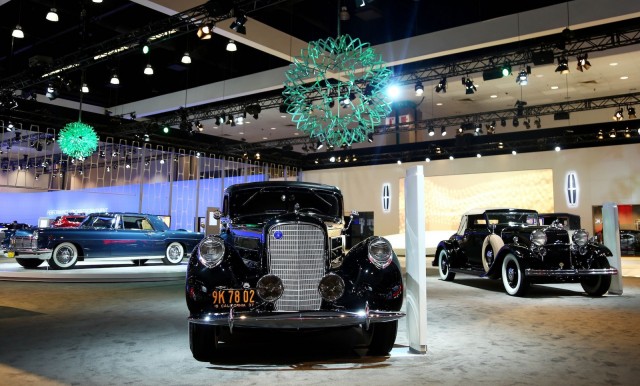 Amidst this display of classic Lincoln designs was the 2013 MKZ, a car that the automaker hopes will one day prove as iconic as the 1961 Continental Sedan. It’s also tasked with leading a wave of new product introductions for Lincoln, which will introduce three new vehicles over the next four years.

According to Lincoln’s math, targeting major volume segments will give them vehicles to compete in 80-percent of the luxury market. Like the MKZ, each is expected to emphasize design, though it’s doubtful that any of the new vehicles will utilize a different powertrain from their Ford equivalents.

And that, we suppose, is the real question. Is Lincoln’s renewed emphasis on design enough to attract the volume of new customers it needs, without alienating potential return customers?

We’ll find out over the next four years.