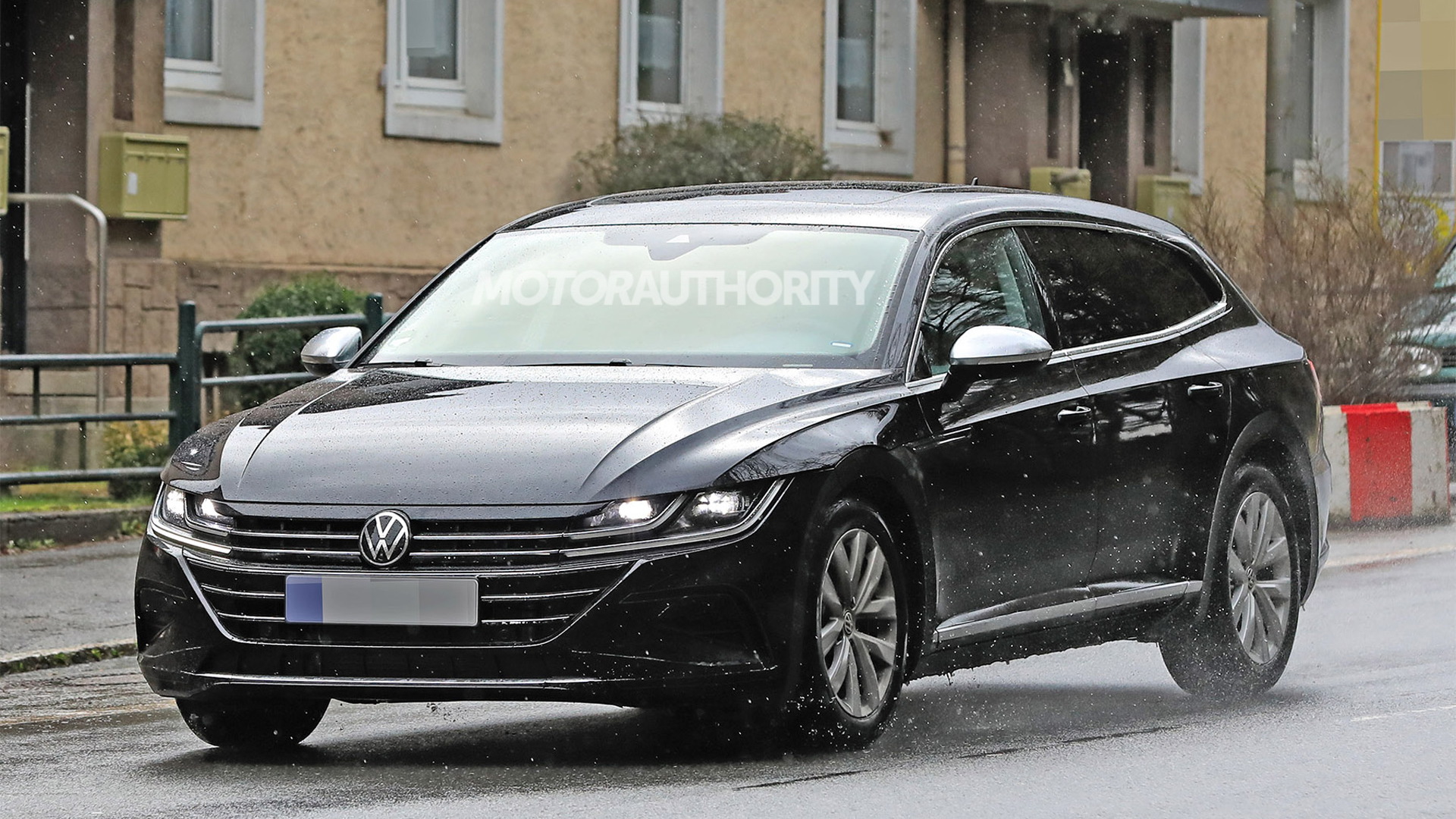 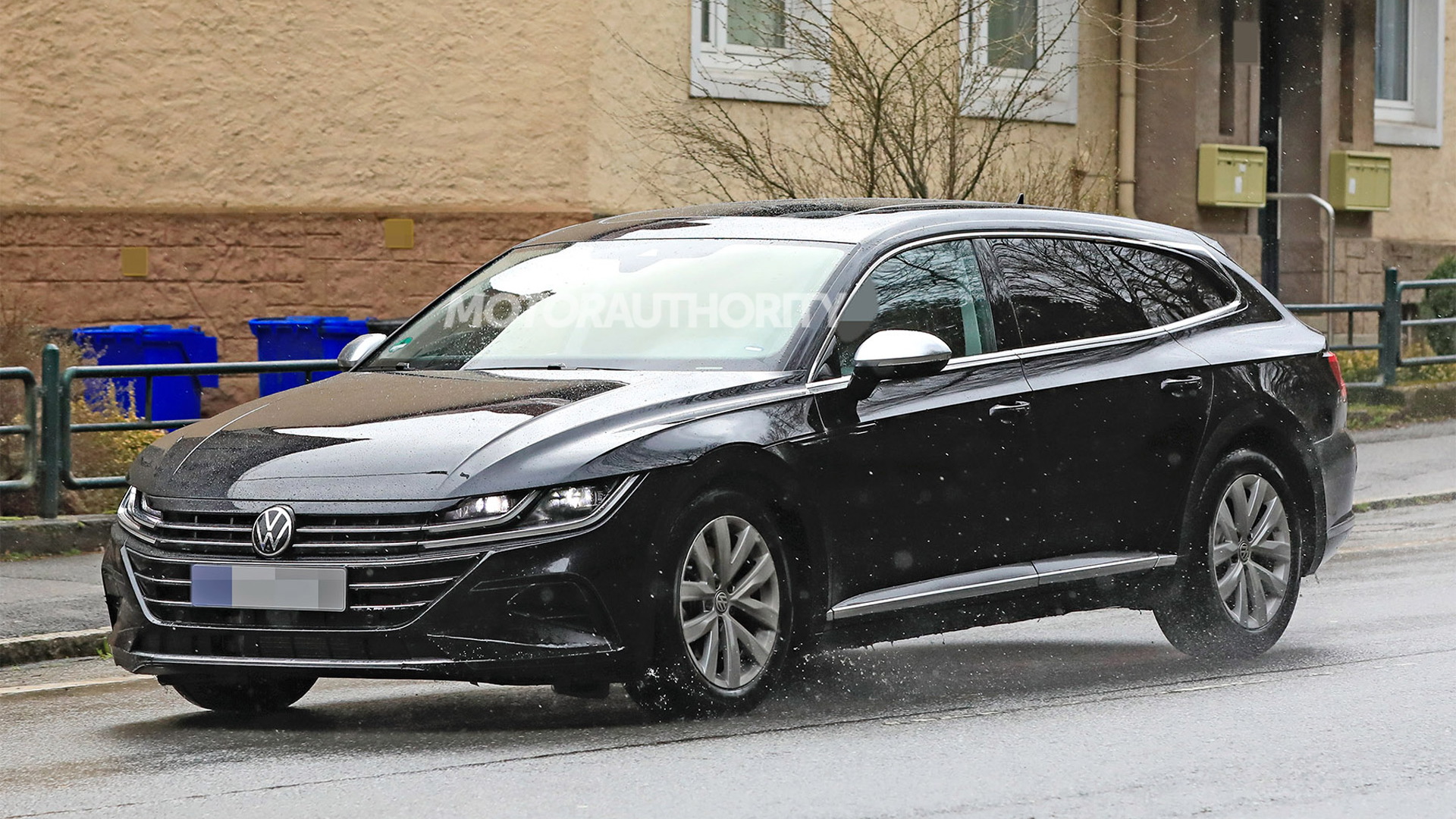 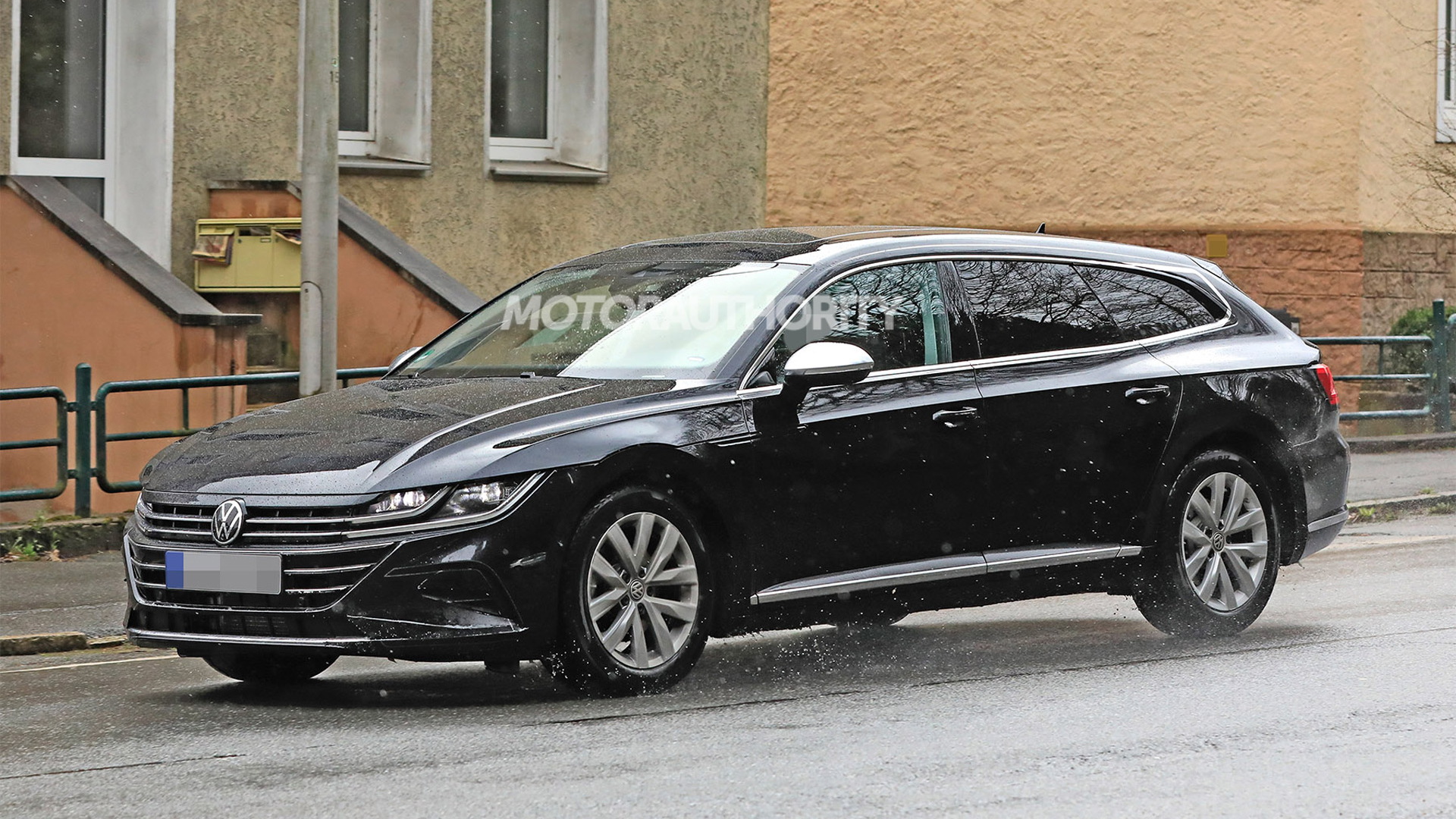 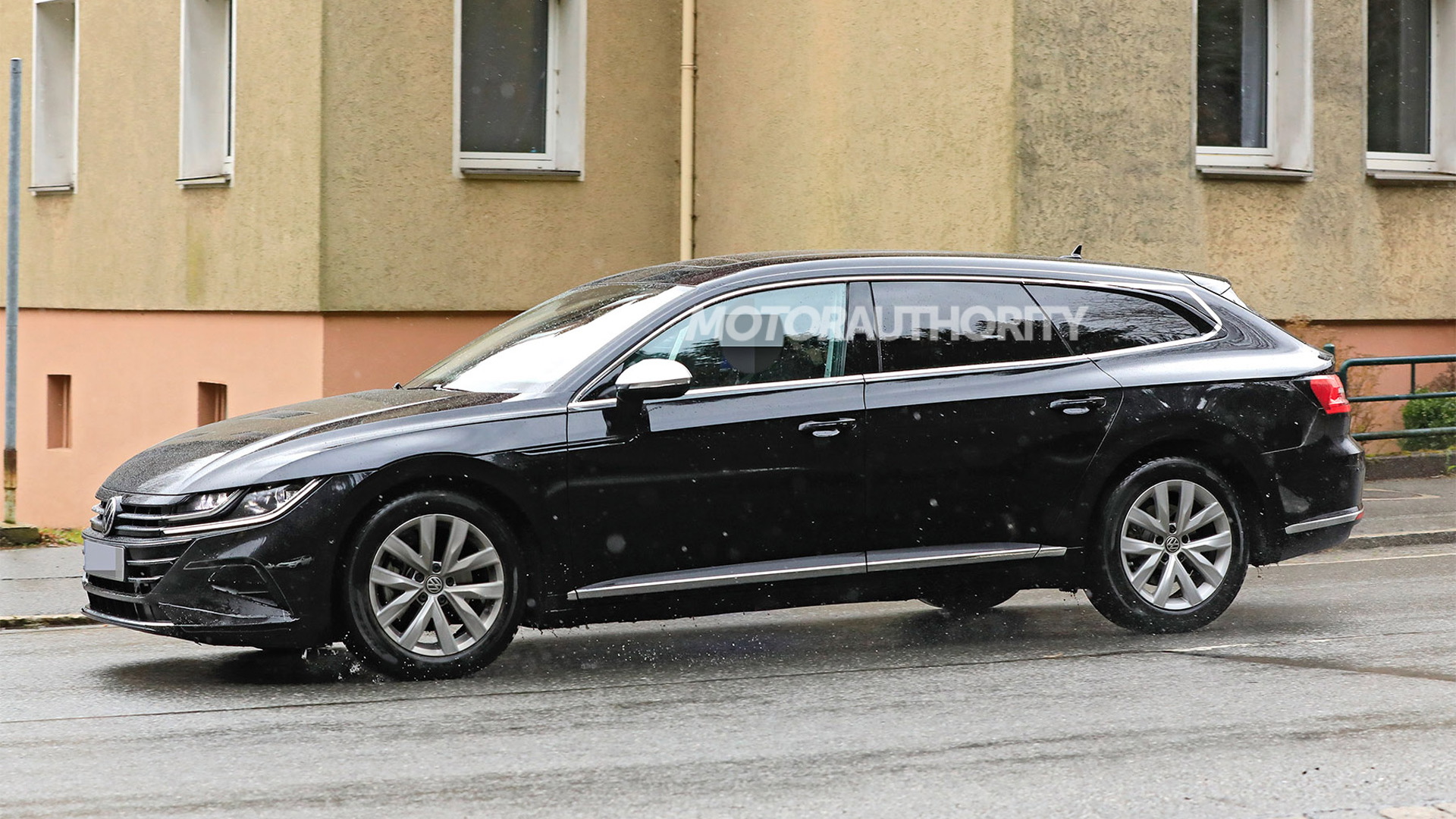 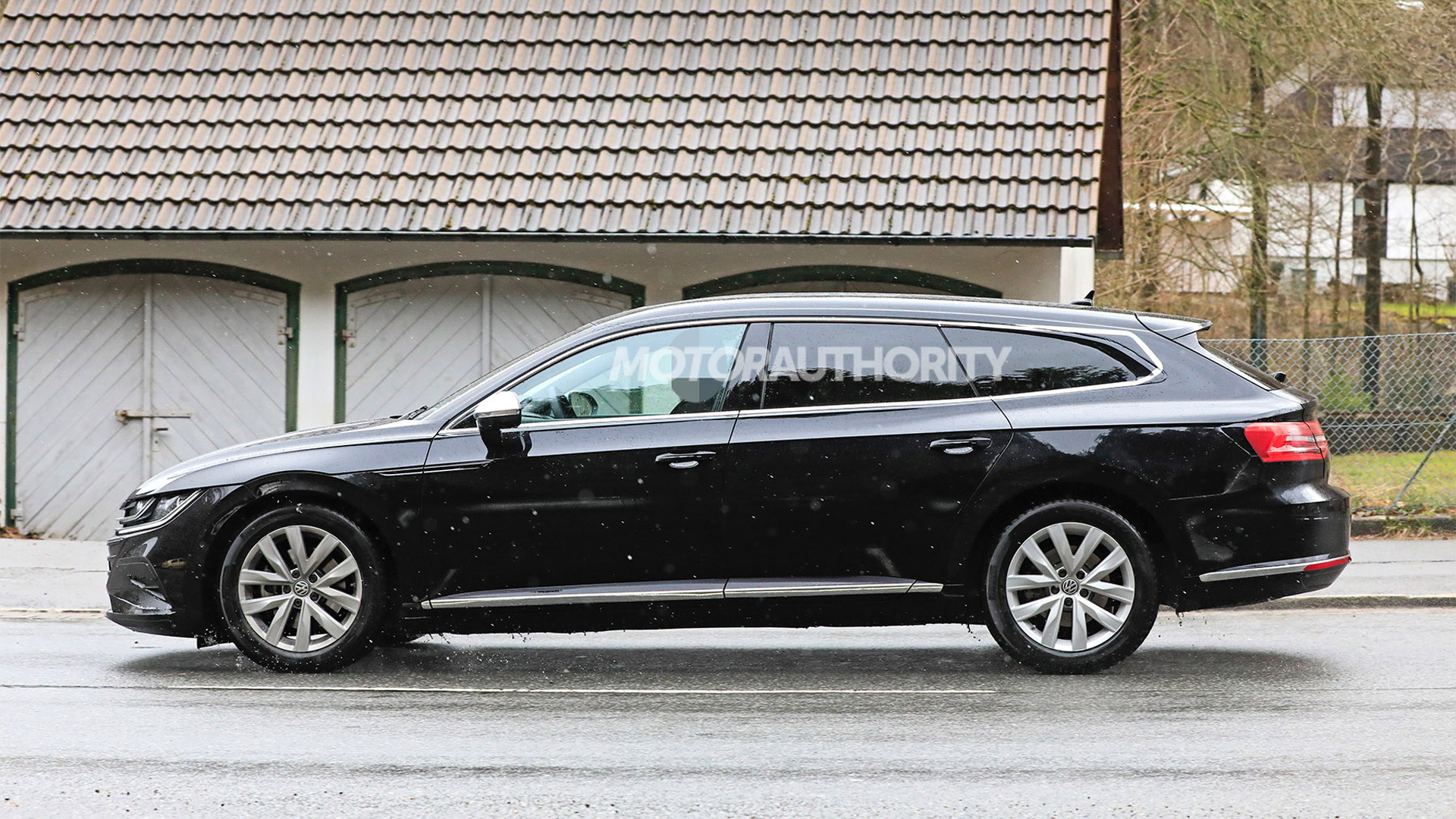 Mercedes-Benz's line of shooting brake models is proof that sometimes style wins out over practicality. For instance, cars like the CLA Shooting Brake and former CLS Shooting Brake serve up four doors and a wide-opening hatch, yet their plunging roofline results in diminished cargo capacity compared to a conventional wagon.

Soon, Volkswagen will give the segment a go with an Arteon Shooting Brake. New prototypes have just been spotted ahead of the world debut on June 24. The longroof will be unveiled alongside an updated version of the current Arteon sedan.

A shooting brake is the traditional term for a coupe with a rear hatch, and since the German automakers are happy to call anything with a curved roof a coupe these days, they're more than happy to attach the shooting brake term as well.

The Arteon Shooting Brake looks to have a slightly longer wheelbase than the Arteon sedan, and naturally the rear is unique. The prototypes also sport the revised front end with fewer slats in the grille which we'll also see on the updated Arteon sedan.

The Arteon may have only gone on sale in the United States in 2019, but it's been on sale elsewhere since 2017 and thus approaching the midpoint in its life cycle, hence the reason for the update.

Also included with the update will be a new Arteon R performance flagship, likely available in both sedan and shooting brake body styles. This model is expected to come with all-wheel drive and a turbocharged V-6 pumping out close to 400 horsepower. Standard Arteons should continue with front-wheel drive and 4-cylinder power.

While VW sees a market for a shooting brake in some markets, sales in the U.S. are doubtful. After all, we’re talking about a niche body style for an already niche product. Blame it on trends or blame it on perceptions, but as most automakers will tell you, Americans just don’t like wagons—no matter what name you give them.