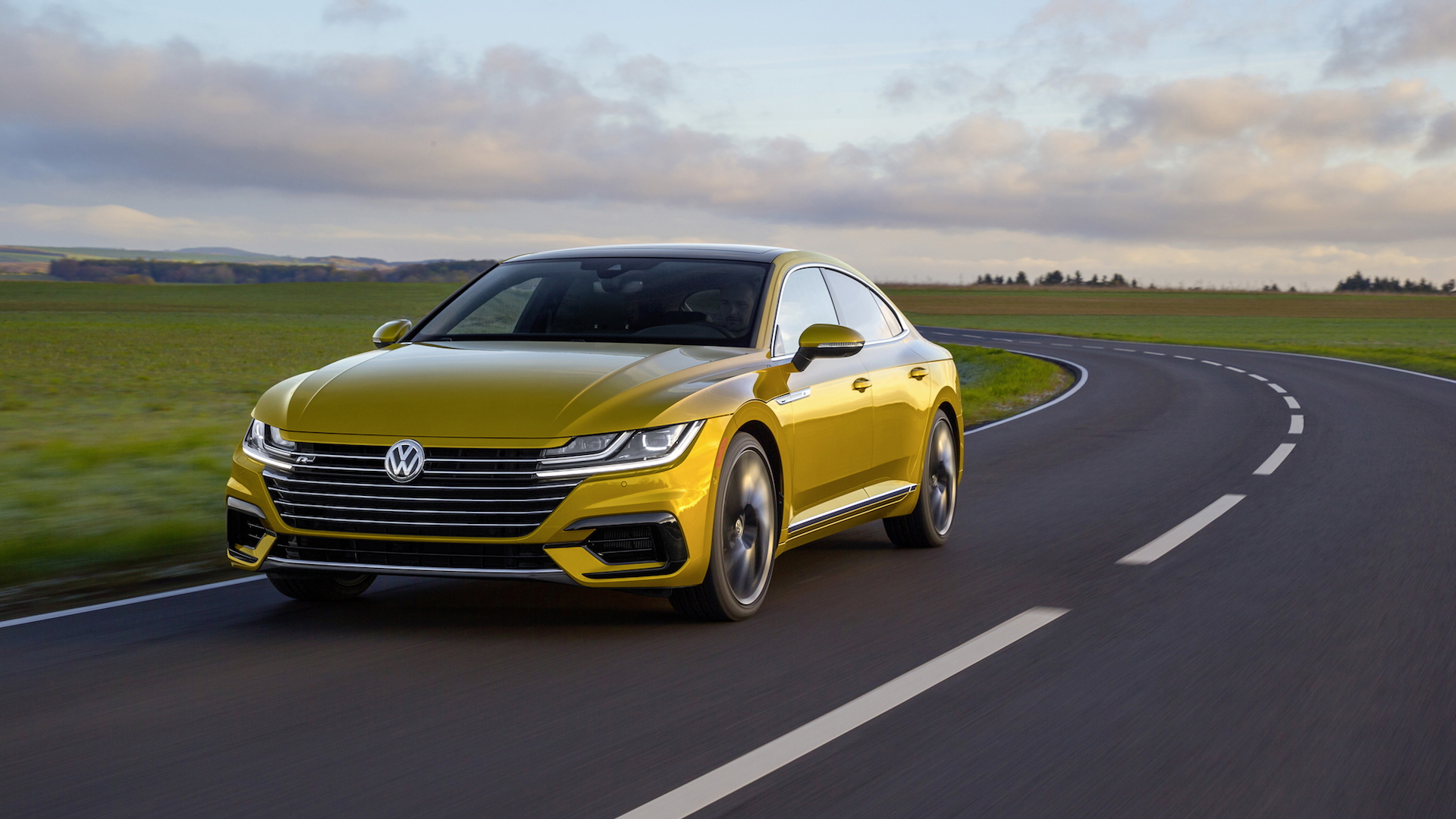 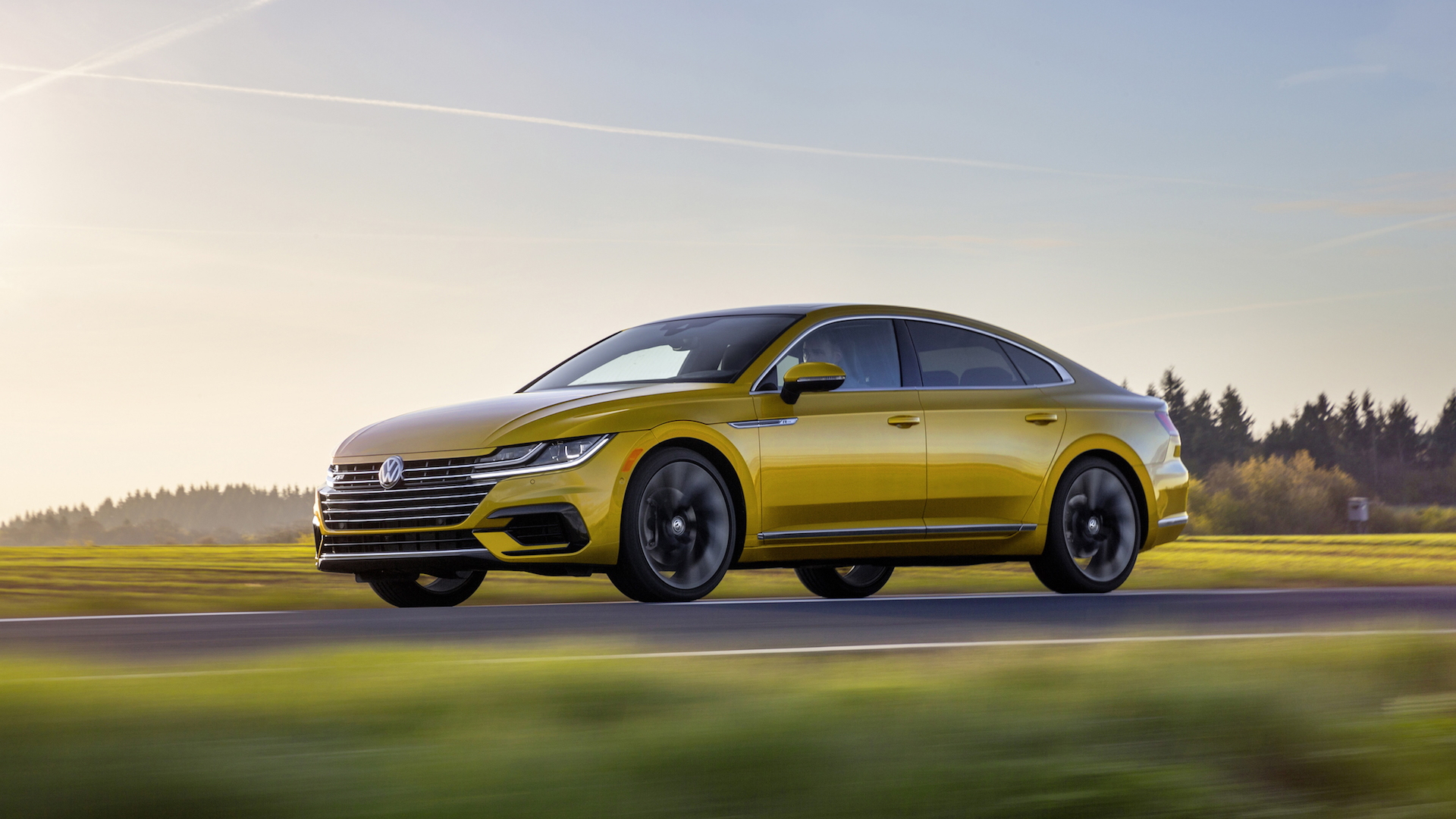 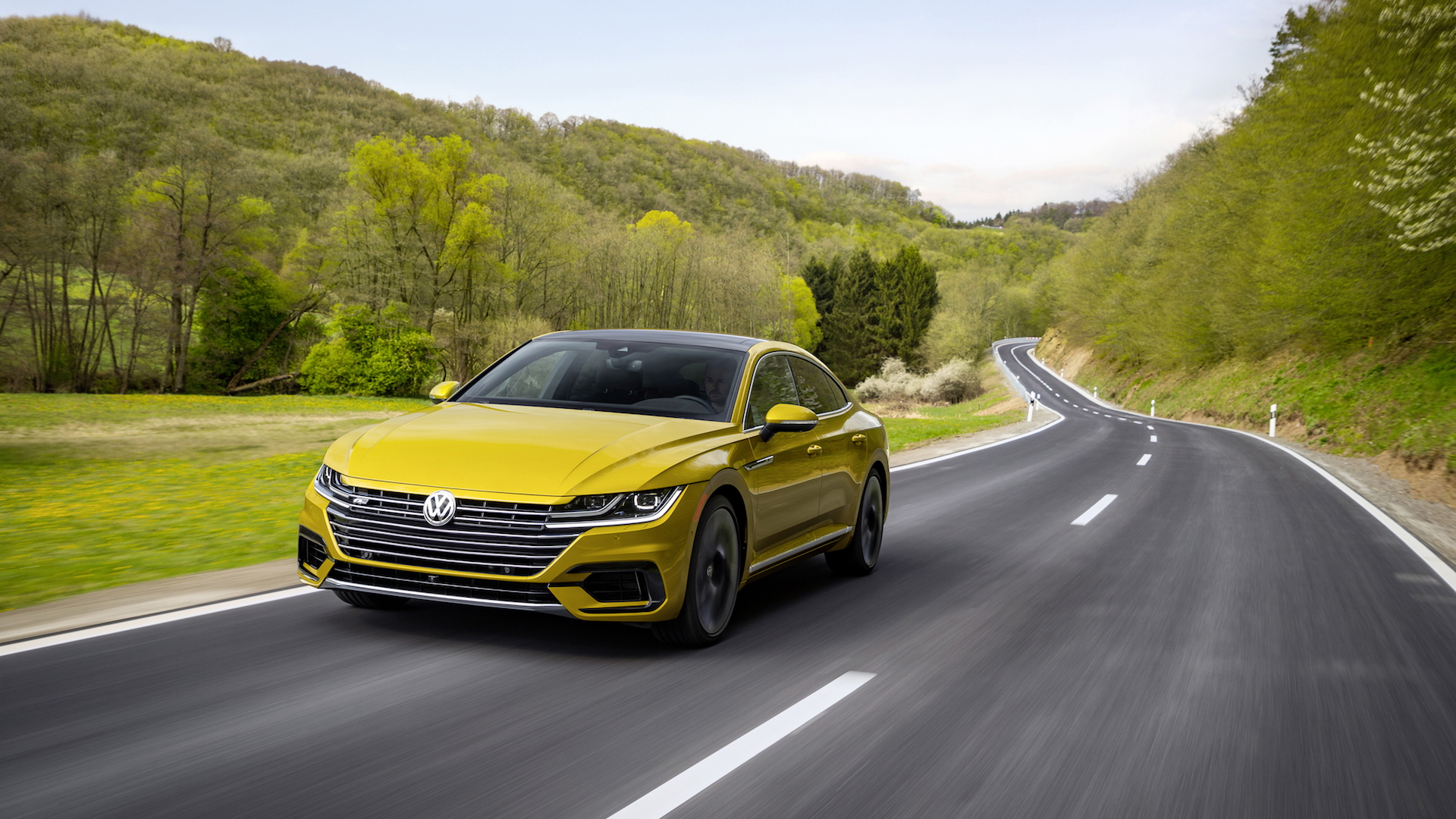 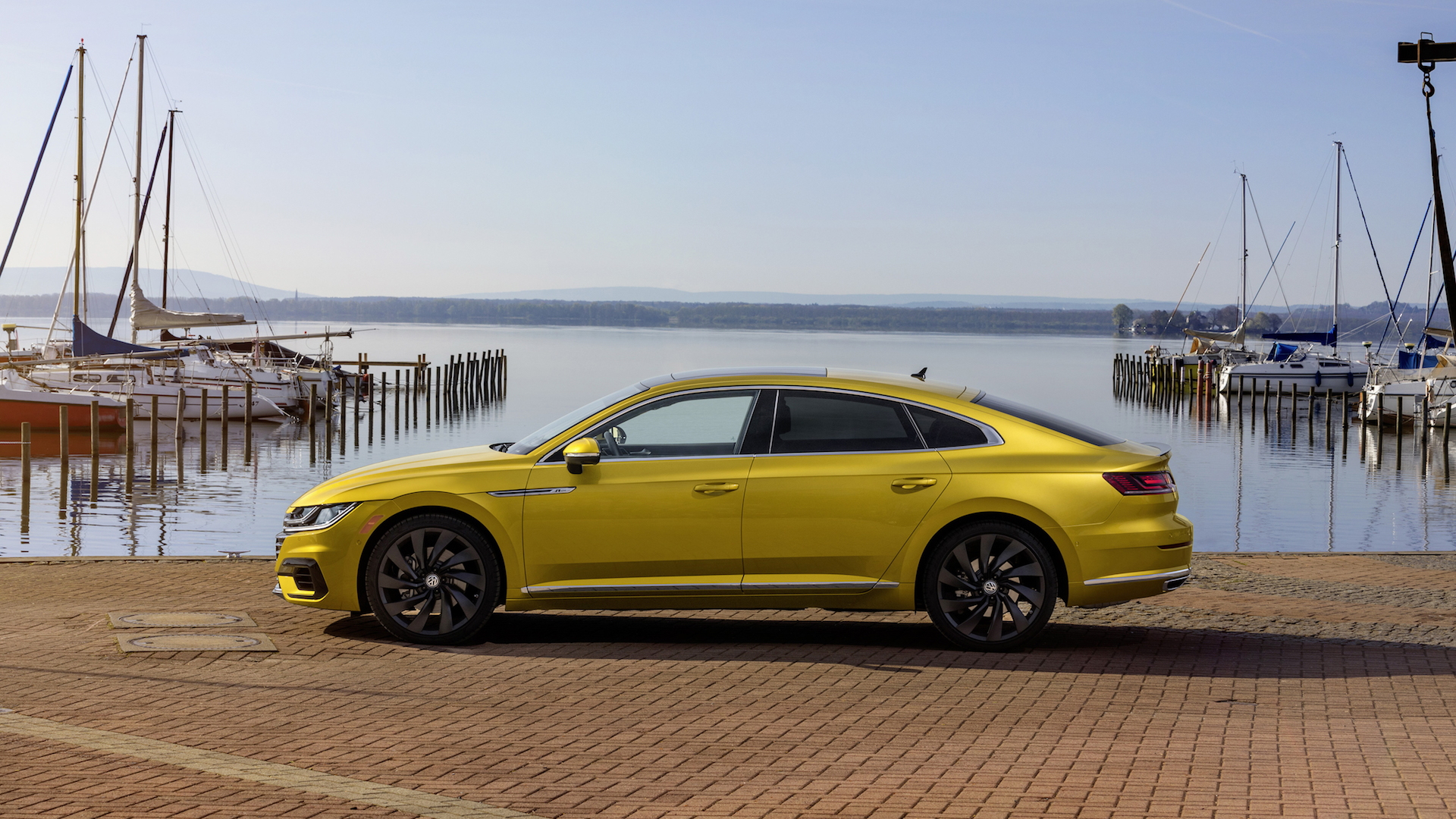 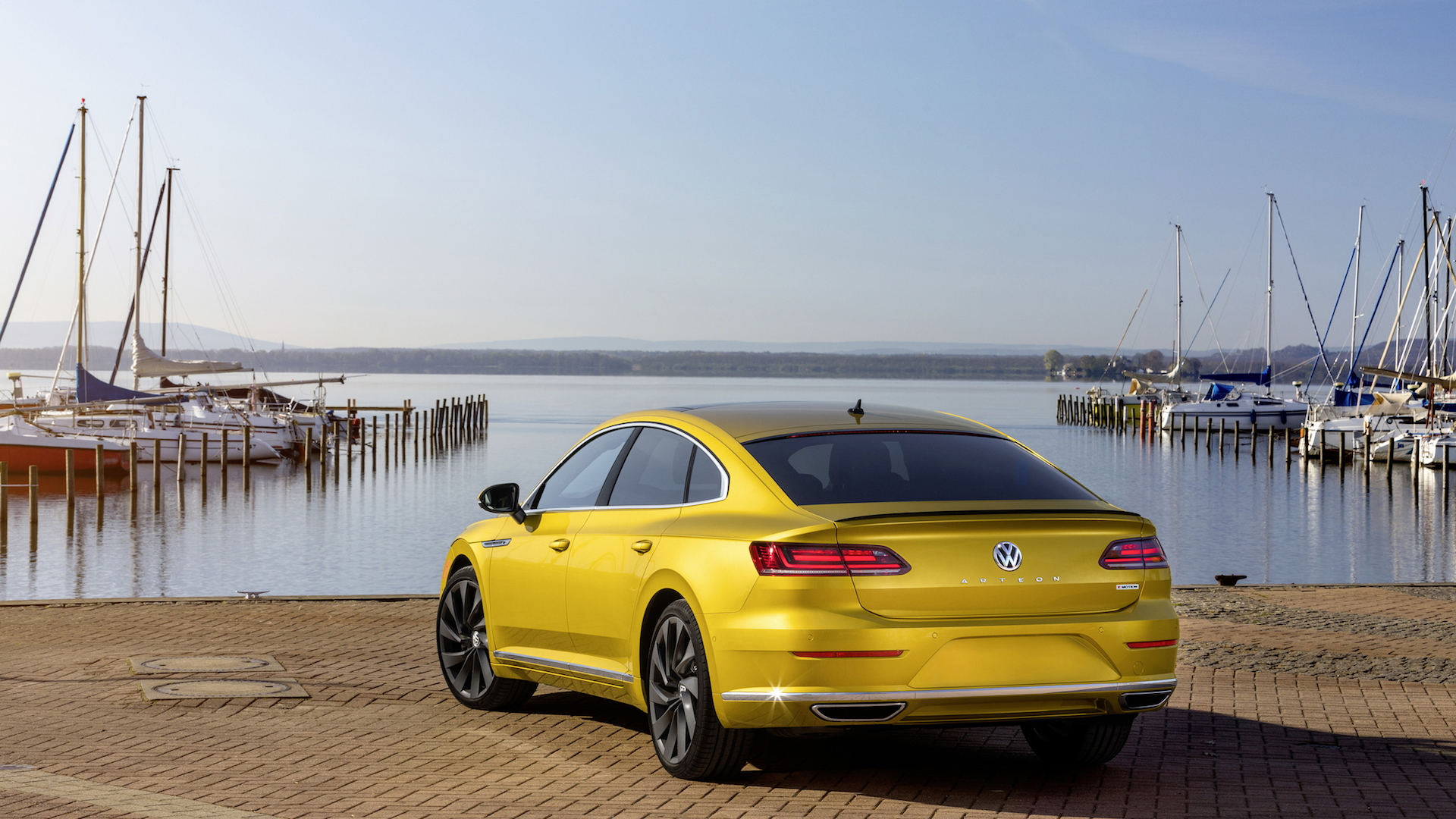 It would be easy to write off the 2019 Volkswagen Arteon as yet another misguided attempt to push the people’s automaker in an upwardly mobile direction. See: Phaeton, CC, two cars that undoubtedly stressed the suits back in Wolfsburg as they languished on dealer lots.

Perhaps those stiff bean-counters should have visited Santa Barbara, California, which is among the mellowest burgs on the laid-back West Coast. Snaking a gray Arteon along a beautiful ribbon of highway called State Route 33, this shapely sedan—which is actually a hatchback—comes into its own. It’s a drama-free car with SUV-rivaling utility in a package that’s palatable when the road turns twisty.

It simply makes sense, at least from behind the wheel.

The five-door Arteon gobbles pavement with ruthless, nearly anodyne efficiency as Route 33 unfurls toward sublime Ojai, a hamlet known for its hippie spiritualism. The Arteon isn’t for Ojai, though. Leave the hippie-dippie stuff to tired Beetles and Buses, the Arteon says as it dispatches pavement with Teutonic precision.

Behind the wheel, the Arteon makes so much sense. It reminds me that crossover SUVs aren’t the only vehicles that can have their cake and carry it, too.

But it may be condemned to the same fate as the CC and Phaeton that preceded it.

Power builds quickly from the 268-horsepower version of VW’s 2.0-liter turbo-4, an engine so ubiquitous that it can be found in humble Golfs to aspirational Porsche Macans. In the Arteon, it’s paired to an 8-speed automatic transmission and either front- or all-wheel drive. The engine makes little fuss underhood as it vaults the 3,900-pound Arteon forward. I didn’t experience the front-wheel-drive Arteon, but neither will most buyers. VW expects three-quarters of Arteons will roll home with all-wheel drive.

Adaptive dampers come standard no matter the drive wheels, and they’re adjustable via a sliding scale from soft to firm after tapping the Individual setting in the car’s 8.0-inch touchscreen. The degree of adjustment is impressive, and it complements the Normal, Comfort, and Sport modes pre-set by the factory. Left in the softest setting, the Arteon swallows bumps like an old Crown Vic taxi. Tap the scale into the firmest mode and it’s downright stiff. For most drivers, the comfort zone will be right in the middle, where the dampers can tighten up on their own on a twisty road.

Underneath the Arteon’s muscular body sits VW’s stiff MQB modular architecture, which has enough range to underpin everything from Golf hatchbacks to Atlas three-row SUVs  The base Arteon weighs around 3,700 pounds, which is relatively lithe for a 191-inch-long sedan. VW makes use of a relatively conventional multi-link suspension and electric power steering, which work in concert to give it confident, but not especially inspired handling.

The Arteon punches through the road on wide, long sweeping turns with relative grace. Its steering has good heft, but there’s little communication from the 19-inch tires like those on the car I enjoyed along Route 33.

Wind and road roar are more present at highway speeds than they should be, perhaps a reminder that this platform is at its aspirational limit under the Arteon.

Spending $1,300 more nets the Arteon R-Line package, which upgrades from 18- to 19-inch wheels, plus fussier gloss black exterior accents and, on SE and SEL trims, paddle shifters. I’d spend my money on a few nights relaxing at one of Santa Barbara’s many posh hotels instead. The 19-inch wheels don’t disturb the car’s ride compared to the standard 18s, but the styling touches are overwrought.

Left out of the MQB party is the recently revamped Passat. VW dialed that model downmarket in anticipation of the Arteon, and that two-prong strategy may work. Buy the Passat if you’re swayed by VW’s 6-year, 72,000-mile warranty. Pick the Arteon if you like long warranties and want to see your car valeted up front, at least until the Bentleys arrive after happy hour.

The Arteon’s fastback shape delights in its details. Horizontal chrome lines in its grille run into the LED running lights. Its clamshell hood runs deep into its fender sides. Working toward the rear, its wide haunches look as though they could swallow tires wide enough to fit on a Corvette. The Arteon gives off rear-wheel-drive vibes better than most front-wheel-drive cars.

Inside, the Arteon is business-like, though more careful material selection could elevate the experience. Its dashboard is symmetrical and largely devoid of flair other than a chrome strip that runs between its climate control vents. Controls are clustered around and especially below an 8.0-inch infotainment touchscreen that is shared with other VW models. All of its buttons, switches, and knobs look as though they come from other VWs, too. VW offers warm brown upholstery, but VW could class up the joint further with a stitched dashboard and trim panels more interesting than fake wood and aluminum.

There’s room for improvement when it comes to the numbers, too. All-wheel-drive Arteons are rated at a disappointing 23 mpg combined. (Front-drivers rate a marginally improved 25 mpg.) At around $37,000 to start, the Arteon starts where mainstream rivals such as the Honda Accord Touring top out, but its synthetic leather upholstery and downmarket instrument cluster don’t match its price. Active safety tech such as automatic emergency braking and blind-spot monitors are standard, as they should be for the price. Spend $41,000 and VW drapes the seats in leather, cuts a moonroof into the ceiling, adds adaptive cruise control, and swaps analog gauges for a 12.3-inch digital instrument cluster. Audi wants about $6,000 more for a smaller A5 Sportback outfitted about like an Arteon SEL, and for once the VW may be the prettier sibling.

VW bills the Arteon as its flagship, but declining sales for cars suggest that if the ship hasn’t yet sailed in favor of cars, it’s ready to launch. With the Arteon, VW has a stylish, soothing sedan that’s pleasant to drive and surprisingly practical.

It may be daring enough for a few SUV shoppers to take notice, but it likely won’t stem the tide of drivers switching from cars to crossovers. At least VW tried.

Volkswagen provided travel and lodging to Internet Brands Automotive to bring you this firsthand report.