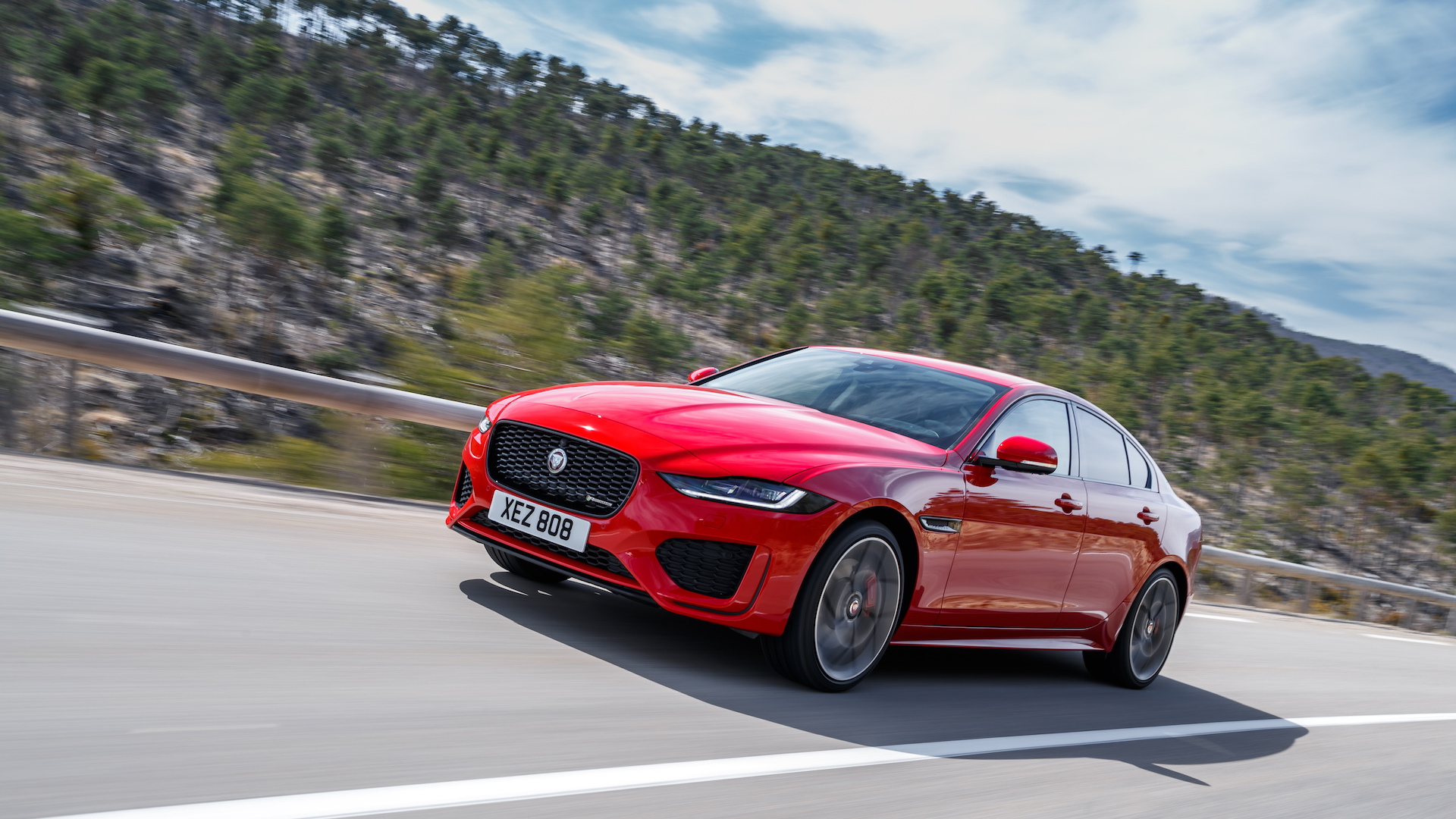 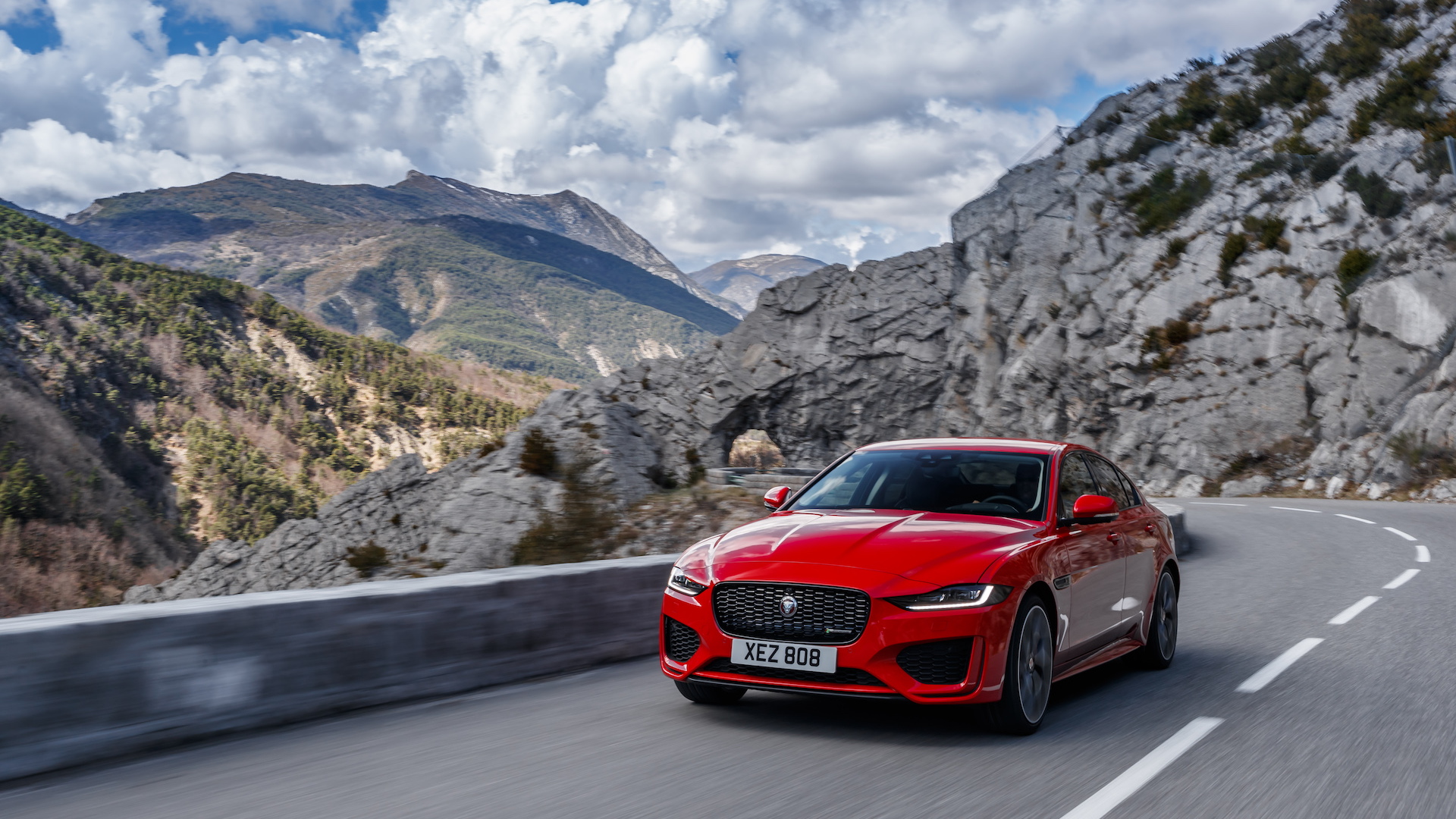 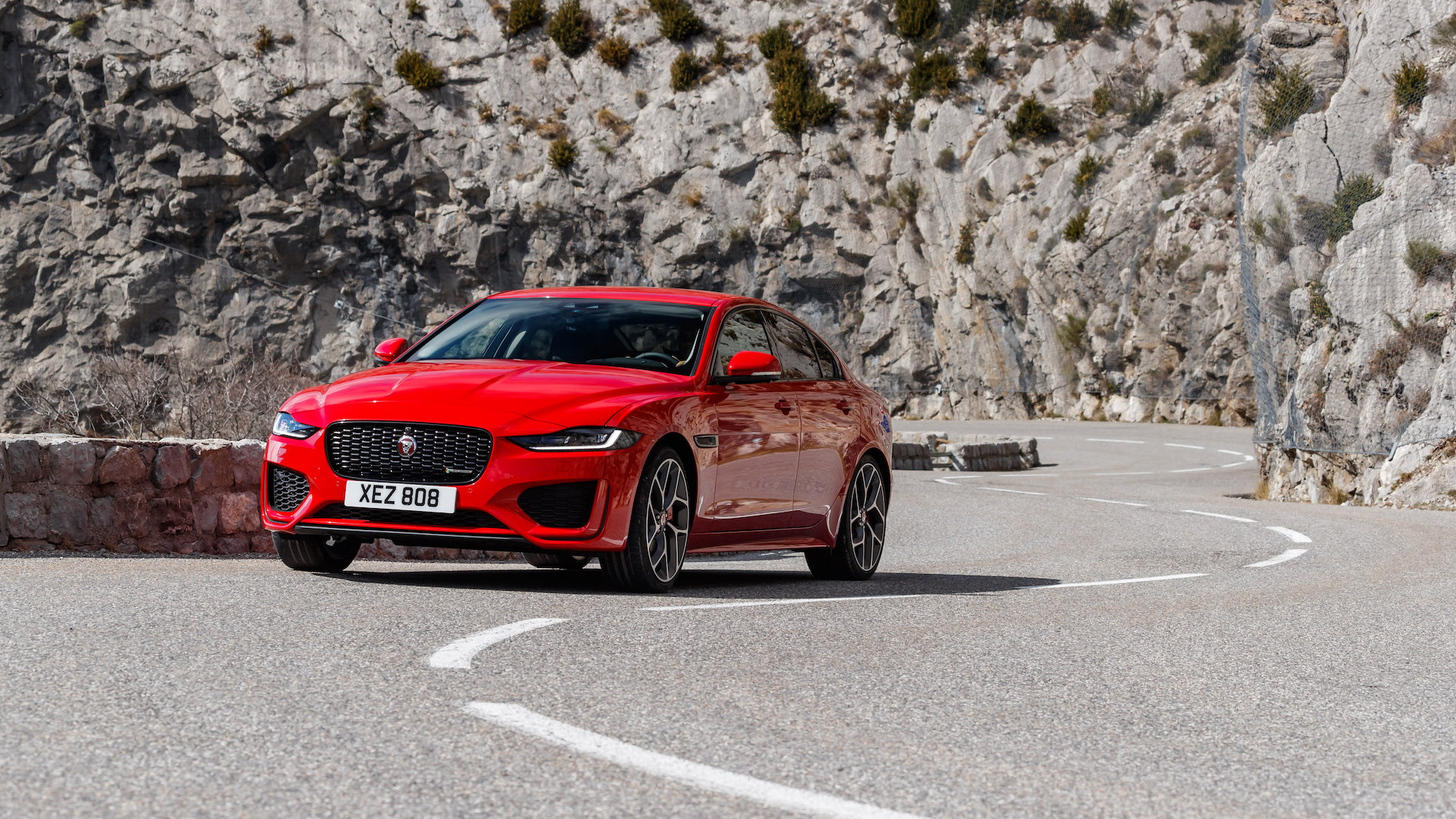 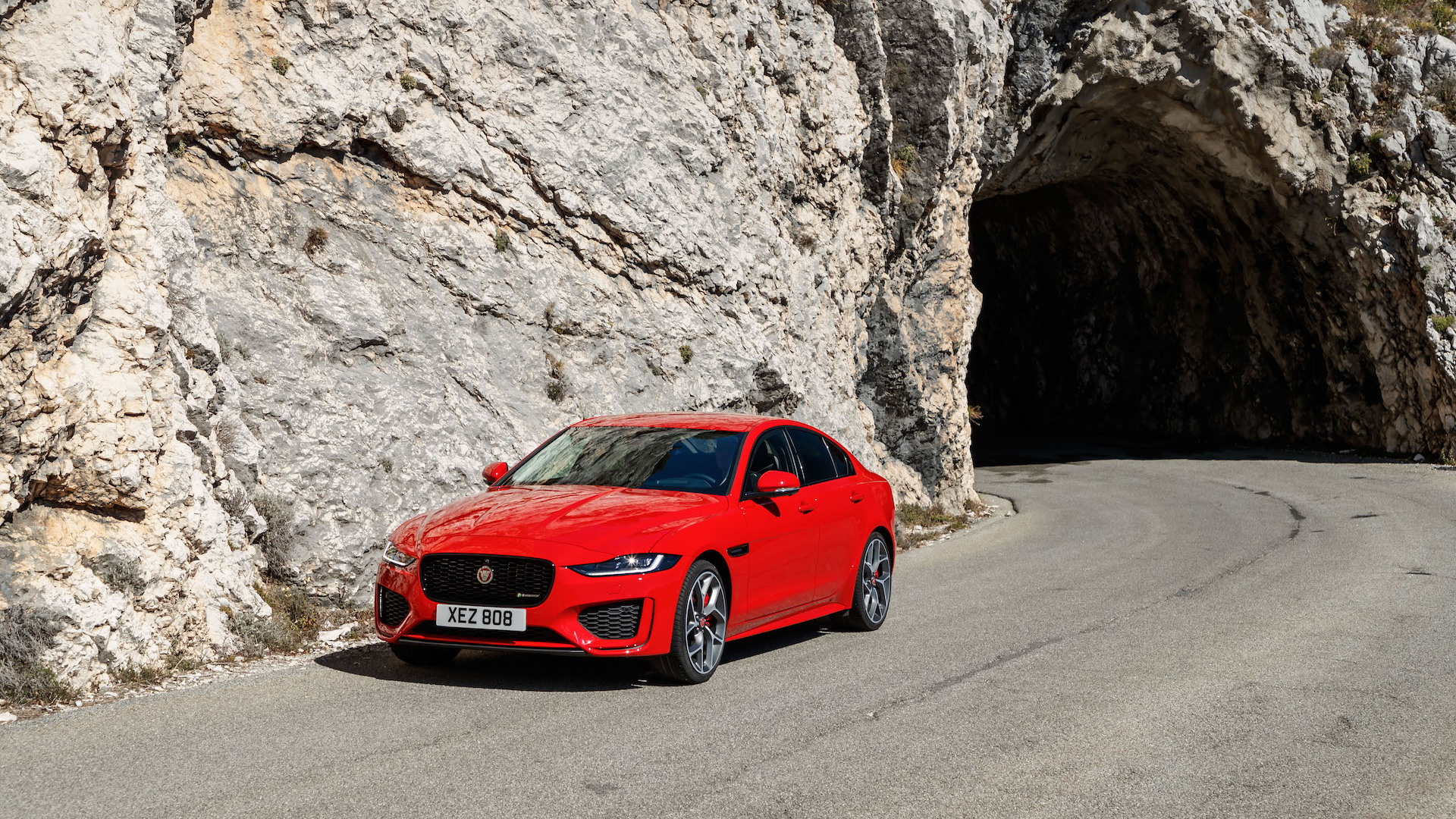 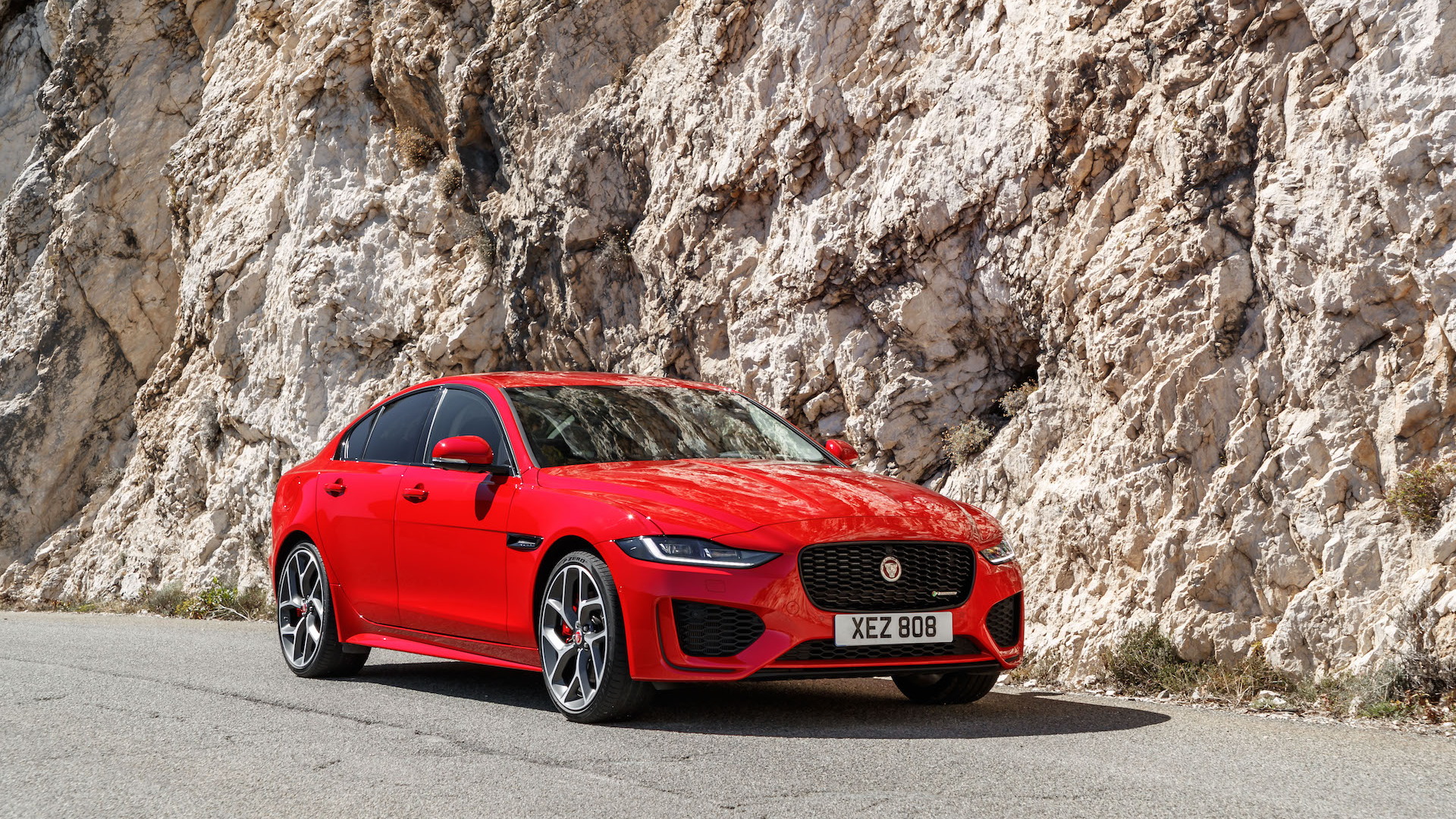 We’ve said it in so many ways, but it bears repeating: The sport sedan is in full wane. BMW’s X3 is a better 3-Series, the GLC’s our favorite C-Class, and Jaguar’s I-Pace points to the future of electric transportation.

What to make then of the pert and lively 2020 Jaguar XE sedan? It’s trying to put gravity on hold, trying to defy the downward four-door trend with a raft of changes inside and out.

We flew to France for a spin through petite grands canyon and for a first drive of the 2020 XE, for an inkling into whether turbo-4 engines, a refreshed look, and already smart ride and handling give it any chance at chasing front-runner status in Jag’s own SUV and sedan stable.

The $40,895 Jag XE and the more pricey all-wheel-drive and R-Dynamic versions unite behind one powertrain this year. The supercharged V-6 has been 86’d, the turbodiesel slate wiped clean.

Left behind is the Jaguar Land Rover-developed 2.0-liter turbo-4 engine found in last year’s car. Jaguar sells it in two versions: P250 cars spool up for 247 horsepower at 5,500 rpm and peak torque of 269 pound-feet as low as 1,300 rpm, while P300 cars have 296 hp and 295 lb-ft of torque, in the same rev ranges. Either one spins fairly freely toward redline without much strain, but P250 cars can reach 60 mph in 6.2 seconds, while P300 cars and their standard all-wheel-drive hardware hit the same mark in 5.4 seconds. Both reach a top speed of 120 mph, something we couldn’t reach thanks to draconian French autoroute cameras.

The 2020 XE shifts its 8-speed automatic with crisp attention through a new lever, which replaces the rotary dial on previous models. Paddles back up the stick controller on P300 cars and on P250s as an option; the transmission lever flips into a Sport mode that holds gears near redline or remaps itself in driver-selectable modes from Comfort to Eco to Rain/Snow/Ice to Dynamic, where we set it and forgot it for most of the late afternoon hustle.

P250 XEs have rear-wheel drive, but all-wheel drive’s an option—and it’s standard on the P300 car.

Since its inception a few model years back, the XE’s held our attention for the clarity of its steering response and for its real-world ride. That electric power steering feel hasn’t diminished a bit; without a couple hundred pounds of V-6 on the nose, the turbo-4 XE’s responses have been sharpened, even with its 18-inch wheels. In Sport mode there’s more centering weight, but it doesn’t dive into hefty overprogrammed muck like some racks. It’s attentive to small inputs without being obsessive.

A minor retune on the XE’s suspension hasn’t sullied its swell ride either. With the base 17-inch wheels gone this year, the 2020 XE hasn’t risked its fluid damping for the showroom appeal of big and blingy wheels. The XE’s never had a real, widely available competitor for sport-package 3-Series cars (or the M3 for that matter), and it shows in the resilience and lean still allowed by its independent suspension and by its available adaptive dampers. The ride’s firmer but still more compliant than most of the sport sedans that share its size and mission. Don’t let the red brake calipers and trunk spoiler mislead, the XE’s soft enough to endure a daily-driver routine—though we’ll hold judgment on cars with the optional 20-inch wheels and summer tires until we’ve raged around Atlanta traffic on them.

Touch-ups and tweaks of the minor variety

Where the Jag XE falls behind cars like the 3-Series is in presentation. It’s an odd world in which the Jaguar sedan mimics its more sternly drawn rivals, but that’s where we are: This generation of Jags has abandoned old-school glamour for something far more common. It’s still a handsome rendition of the classic sport-sedan shape, but the XE’s updated LED lighting and refactored grille don’t nudge it at all out of convention. The Alfa Giulia and Cadillac ATS maybe have proven that convention works better, but we still miss the assertive otherness of old Jaguars.

That’s even more true inside, where the XE’s plainness still rings loud as a cowbell. Tweedy, woody, glammy; we miss all the styling dwarves that would have crafted this Jag’s cockpit in the pre-post-Ford era. Jag has polished the XE cockpit this year with better materials and with new digital displays for the gauges and for the entertainment and climate control systems but the paucity of wood trim and richly textured materials (even the Velar’s woolly seats) counts as a miss. Both Jaguar and Land Rover have evolved to a modern British interpretation of British luxury—but what if the rest of the car world wants something more exuberant, like a Bentley?

Technology, at least, goes into overdrive in the 2020 XE. Along with the digital displays, the XE sports available features such as a wireless smartphone charging pad, a rear camera mirror, Apple CarPlay and Android Auto compatibility, 825 watts of Meridian audio, and programmable drive modes. The R-Dynamic package’s required on P300 cars, but it’s mostly a dark-trim kit with snug-fitting sport seats as its main draw along with the extra horsepower.

Jaguar’s tried to boost the profile of its sedan family with carefully executed doses of tradition. It’s even tried EliteCare, a bumper-to-bumper warranty and service plan that bests anything BMW or Benz offers. The 2020 XE still lurks in the middle of its pack, a breakout for a few distinct reasons, a follower in others, a sedan still waiting for gravity to shift in its favor.

Jaguar provided airfare and hotel so that we could bring you this first drive review.