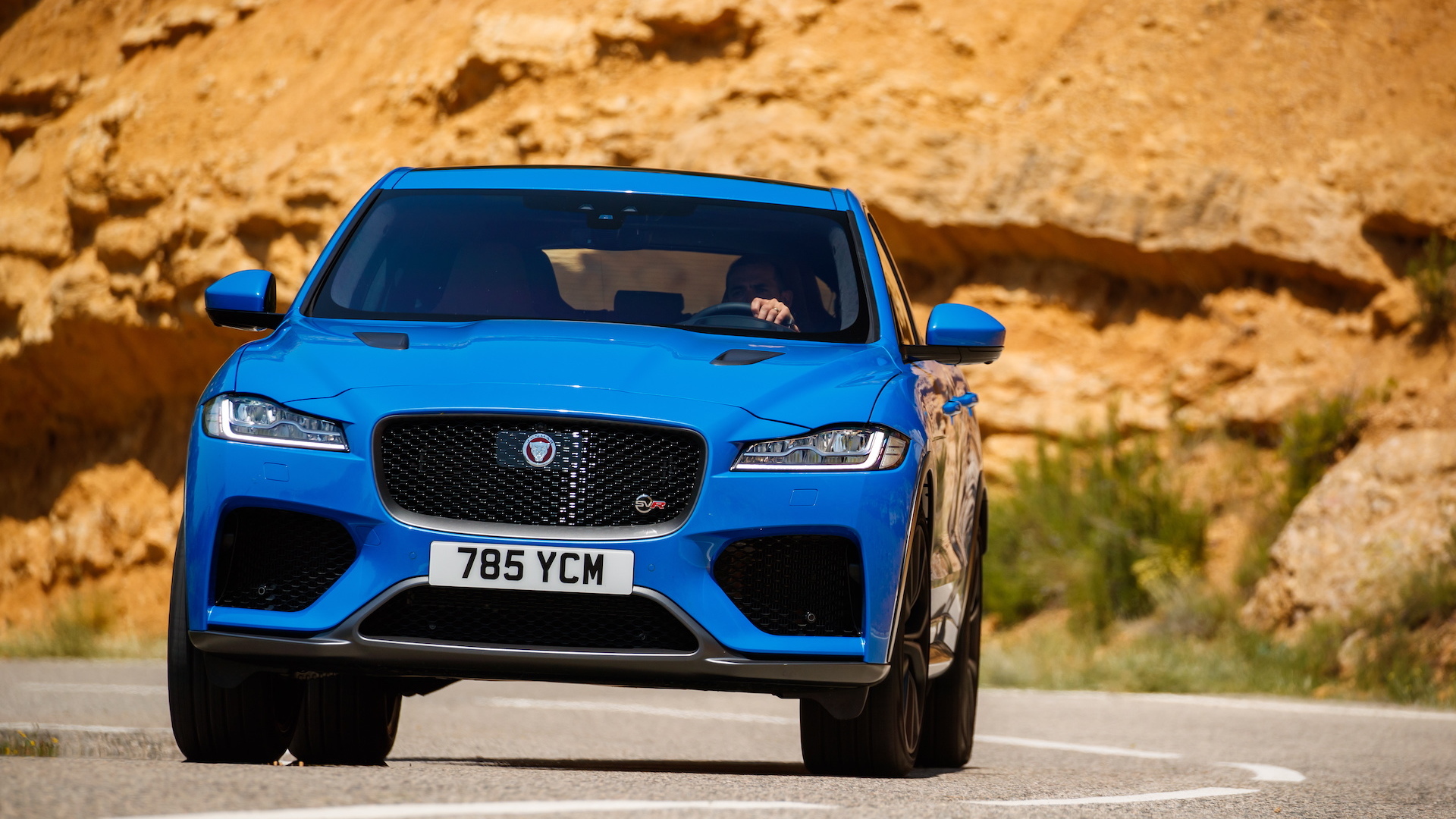 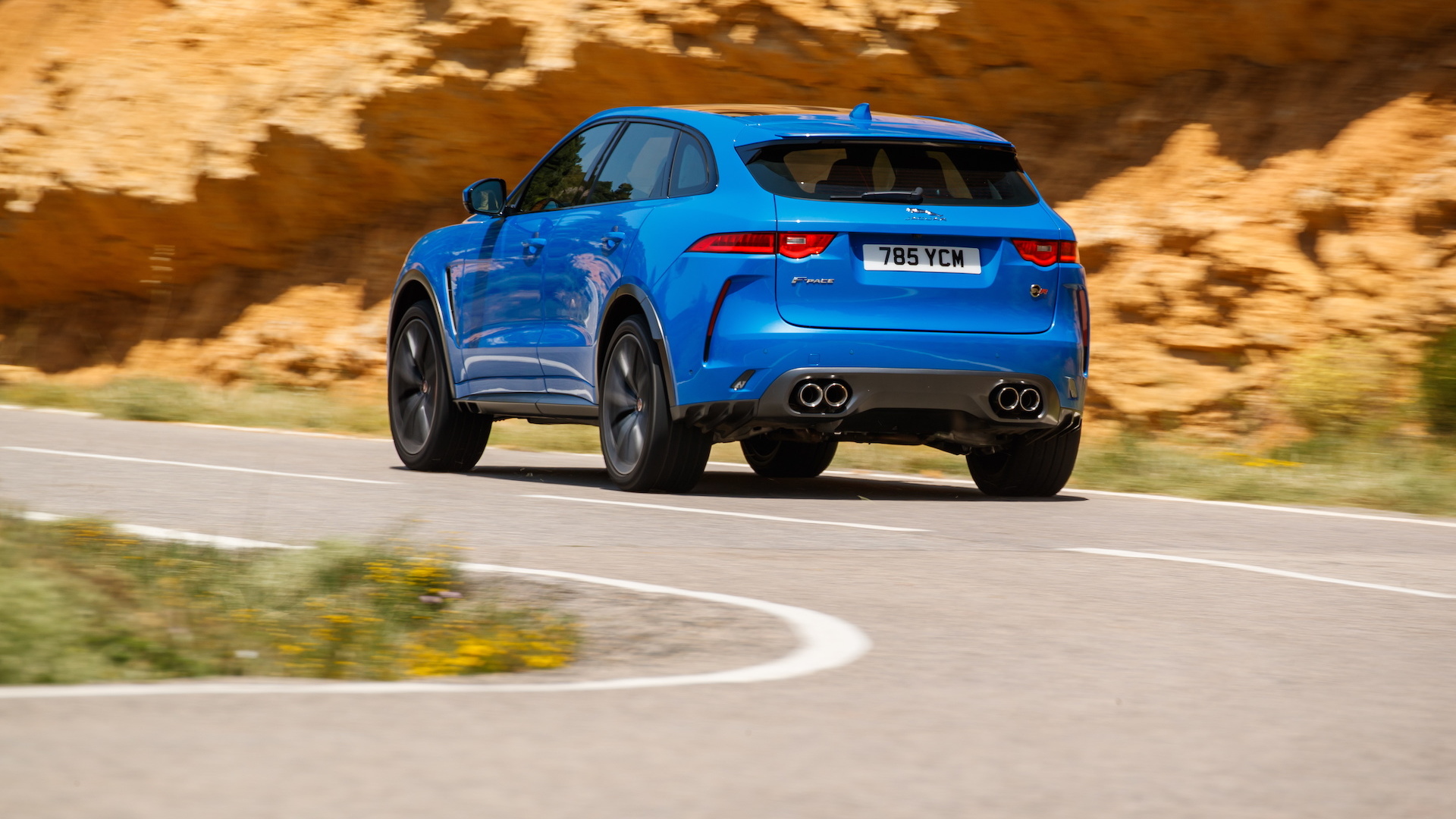 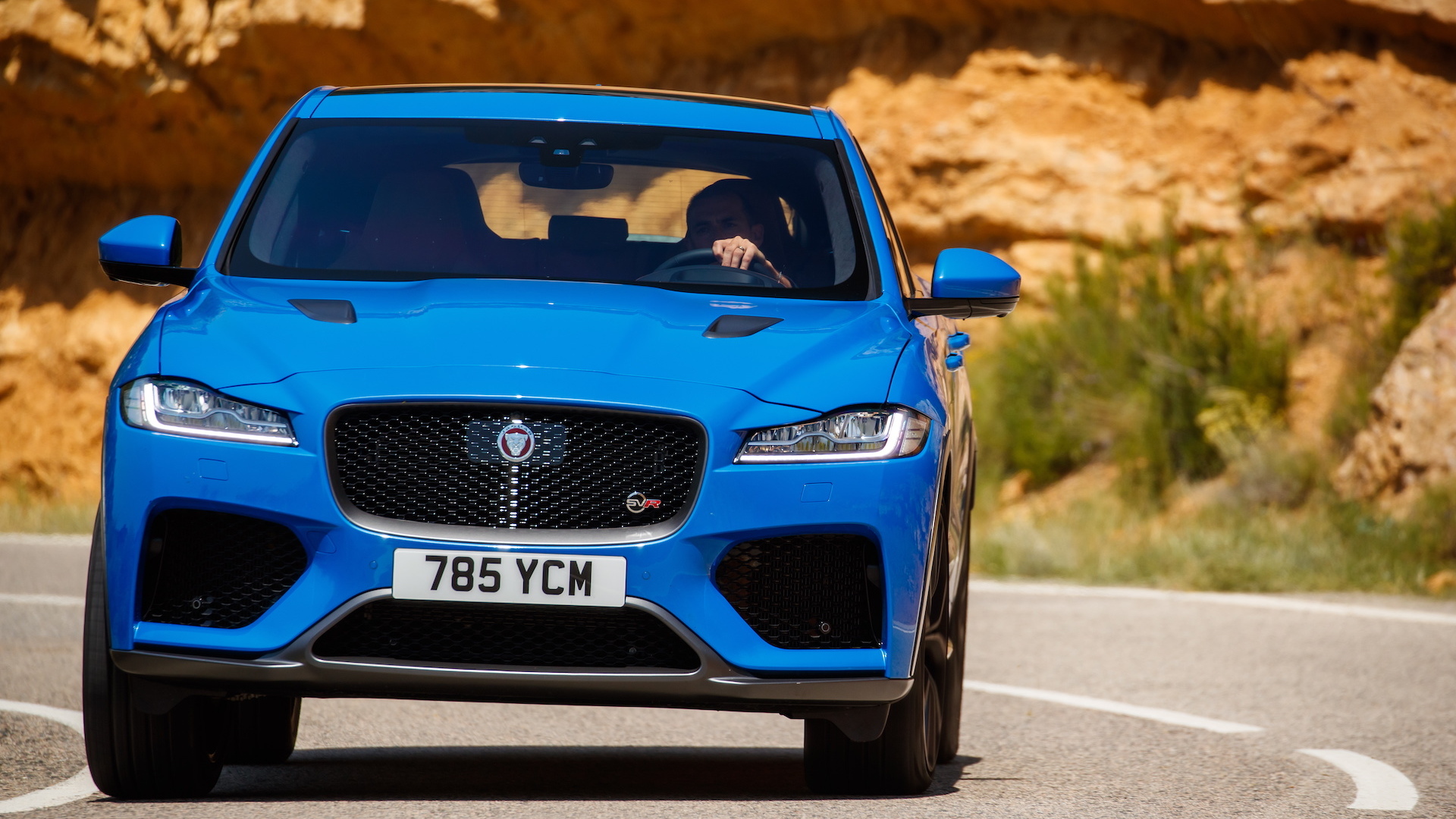 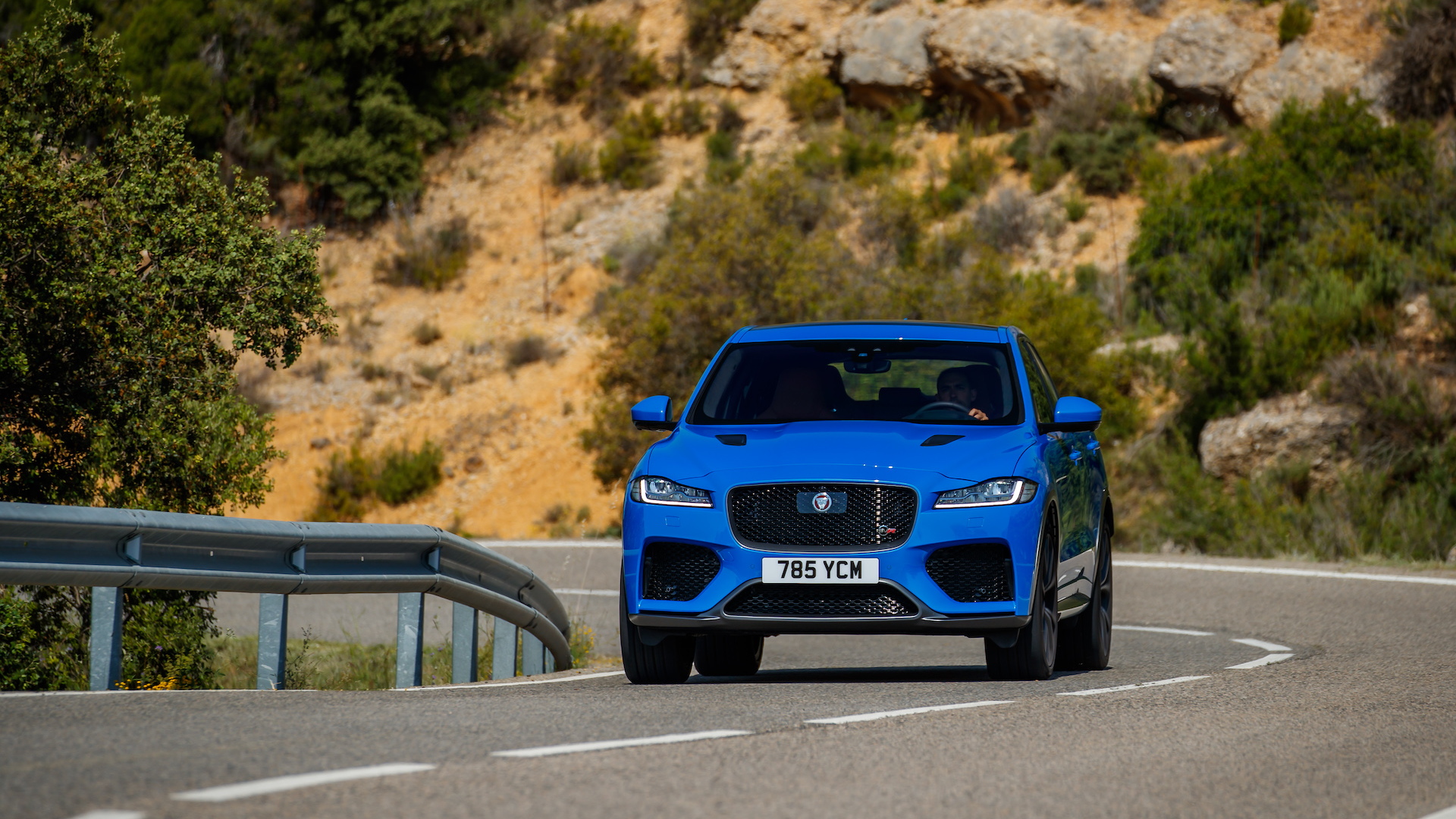 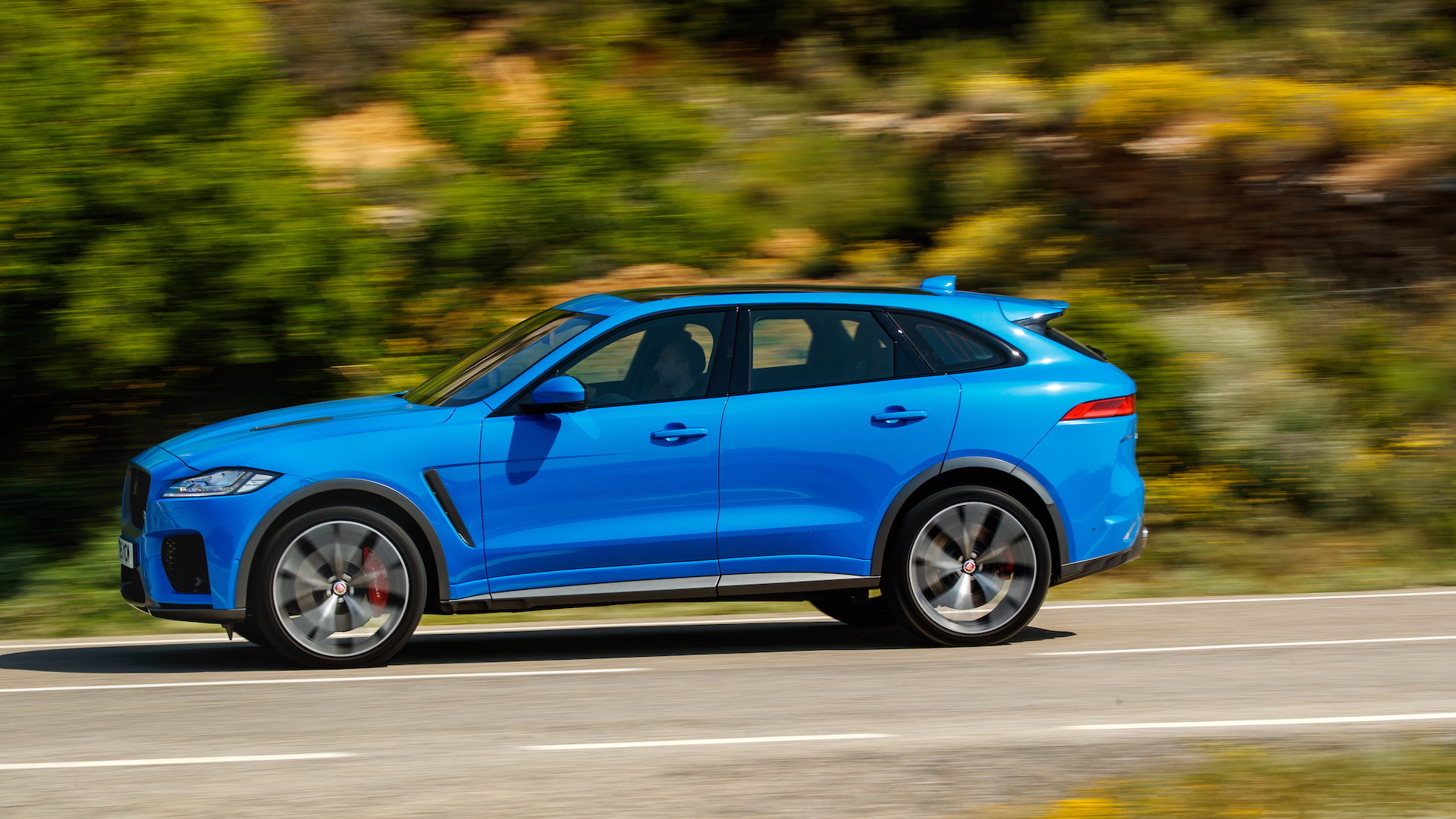 We stop at the top of a ridge in the French Alps, after a round of hide-and-seek played with a low scud of clouds, and I’m shaking in disbelief.

I’m shaking because it’s 42.8 degrees Fahrenheit outside. On a clear day, you might see the balmy, mythic sands of St. Tropez glimmering in the distance. Today, there’s no Bain de Soleil, no suntan. We get leftover snow on the ground. The Mediterranean may as well be a mirage. I can’t argue because we’ve reached the top of this Alp in no time behind the wheel of the 2019 Jaguar F-Pace SVR.

Take the standard-issue F-Pace, skip the turbodiesel and V-6 engines, and lunge for the supercharged 5.0-liter  V-8 new to the order sheet, and you’re halfway to SVR status. All that’s left is to screw down the suspension, fit huggy sport seats, and raise the price to more than $80,000.

It sounds simple, but it could so easily go awry. Engineers might spec the F-Pace SVR so that it’s too stiff at the knees, or eviscerate its heady muscle-car power with poorly coordinated shifts.

They don’t. It flies—and looks fly to both older gents in camel jackets and the young women that aid them across the F-Pace’s front end when we finally descend and thread through St. Tropez’s endless ring of roundabouts.

A 4,395-pound SUV shouldn’t shiv through the air like a lightweight dagger, but the F-Pace SVR does.

Until now, Jaguar’s blocked any V-8 from entering the F-Pace realm; it’s been turbodiesel turtles and V-6s all the way down. The SVR turns on high horsepower without adding a lot of fat. That’s a 5.0-liter V-8 underhood, one blessed with a supercharger that winds and wails through the rev band until it cranks out a peak 550 horsepower, well past the point where it’s reached its 502 pound-feet of torque.

The ubiquitous 8-speed ZF automatic handles shifts with its casual brilliance. Through the SVR’s drive modes, it can knock off shifts more quickly in Dynamic mode and, with a flip of the shift lever to the left, will hold gears at redline patiently until you decide what’s next.

Aluminum paddles cool the fingertips even while the F-Pace SVR builds up a huge head of steam. Jaguar promises a 0-60 mph time of 4.1 seconds and a top speed of 176 mph. Our spot-check meant cracking off four-car passes on a few wide, straight paths that connect the French villages that dot the mountains above the Cote d’Azur. Step into the throttle and—whang!—the SVR hurtles forward, firing a howitzer of power and gleefully crackling when we flutter the gas through pitch-black tunnels.

To feed what Jaguar engineers call their “magnificent beast,” they’ve bored out the front and back of the body to boost airflow. The deep front air dam flares new, big nostrils below its slim headlights. Hood and fender vents widen to increase the volume of air quaffed by the force-fed V-8. In back, quad tailpipes the size of 40-ouncers fuse to a lighter variable-valve exhaust system that’s best left off when puttering past police in small towns. Everywhere else? Let ‘er rip. It’s as sonorous as the wokest Mustang V-8. We’ve always held the suspicion that the engines share more than displacement, and the SVR doesn’t put us off that pet theory.

That kind of power doesn’t just drop in on the wheels without a proper introduction. The all-wheel-drive system from the F-Pace gets an electronically controlled rear differential that moves power across the rear end by braking on inside wheels, for simulated torque-vectoring. It’s programmed to put all the power to the rear wheels until the fronts slip; up to half the net output can shift to the front wheels as needed.

We’ve told you how tightly composed the Jaguar F-Pace feels on the road for the past few years. In France’s version of the Malibu hills, the F-Pace SVR slithers through esses with a reptilian glee, even more stuck to the ground than its smaller-tired kin.

The SVR shares the same control-arm and integral-link suspension with other F-Paces, but adaptive dampers come standard, and the whole tune’s been honed for sharp road connectivity. The front springs get stiffened by 30 percent, the rears by 10 percent, and the SVR’s sway bars get more stout.

Driver-selectable modes keep the dampers and the drivetrain in a more relaxed mood when set to Comfort. There, even with the massive 22-inch optional wheels, the SVR can absorb the bobble and jostle of imperfect roads, and steer with clear intent and not too much fake heft. On the cobbly unpaved paths we ascended, the SVR jacked side to side, unconvinced that it should even be there, its standard 265/45 front and 295/40 rear tires steamrolling like a Transformer over the shallower ruts and ditches.

The SVR wants to be in Dynamic mode, even with upsized summer tires. Tap the drive-mode button until a checkered flag lights on the gauges, and the F-Pace SVR snaps to attention, stiffens the dampers, loads up the steering with enough weight to keep the wheel from jerking or crawling off its line, and wires the gearbox for vividly quick downshifts.

It’s not unhappy on a gravelly grade, but the SVR strains to get back on the pavement. Sweepers show off its suspension tune best; we ease the SVR into deep bends and rocket off into an uphill climb; it’s as if it hasn’t already drunk half its gas, hasn’t begun to grow tired of all the exercise.

The same can’t be said for the driver. By the time I wrestle a few dozen hairpins to the bottom of the mountains and aim the F-Pace SVR toward St. Tropez, a slew of cyclists have nudged the SVR too many times toward steep drop-offs without a care, and my luggage has been slung around like a Bond martini in the cargo hold. But the sun’s come out, and that 42-degree number’s rounded up to a more lovely 65. This is the France all those 1970s commercials promised with a leering eye.

Fleeting, but no mirage

The F-Pace SVR comes from Jaguar’s Special Vehicle Operations division but wears its affiliation in just a few discreet badges. Other visual cues and upgrades get more attention: the F-Pace SVR wears some distinctive badges and gets a few add-ons. Better are its thinner, deeply sculpted sport seats that embrace like you’ve just returned from a tour of duty, clad in quilted leather that’s matched to thread twin-stitched across the dash. A new infotainment system with Android Auto and Apple CarPlay compatibility pairs two 10-inch screens, one for entertainment and one for climate controls, a system we first tried out in various Range Rovers. The SVR gets one bonus its Land Rover compatriots don’t, though. It carries the JaguarCare warranty, which covers everything including maintenance for 5 years or 60,000 miles.

The 2019 Jaguar F-Pace SVR costs $81,015, which pitches it headlong into battle with Porsche Macan Turbos and Stelvio Quadrifoglios and standard and “coupe” versions of the Benz GLC63 AMG. BMW has an X3 M in the offing. Jaguar’s sister division Land Rover’s likely to field its own Velar SVR soon.

The F-Pace SVR deserves its day in the sun with them all. For a moment or two, it made us forget the F-Type. The idea of a performance SUV is hazy for some, but at Jaguar it is no mirage.

Jaguar flew us to the south of France and found approximately 3,229 traffic circles for us to wrap the SVR around.