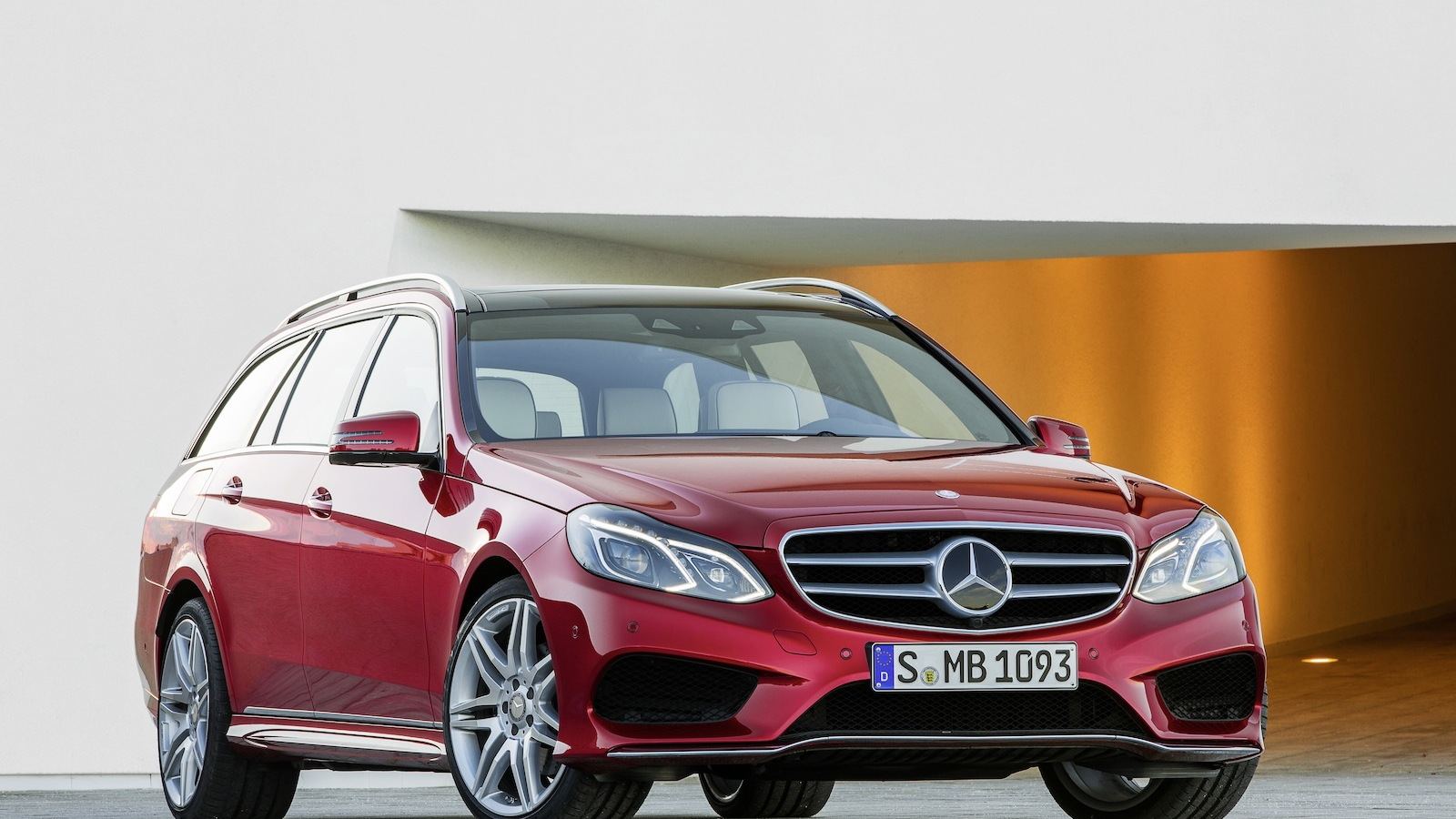 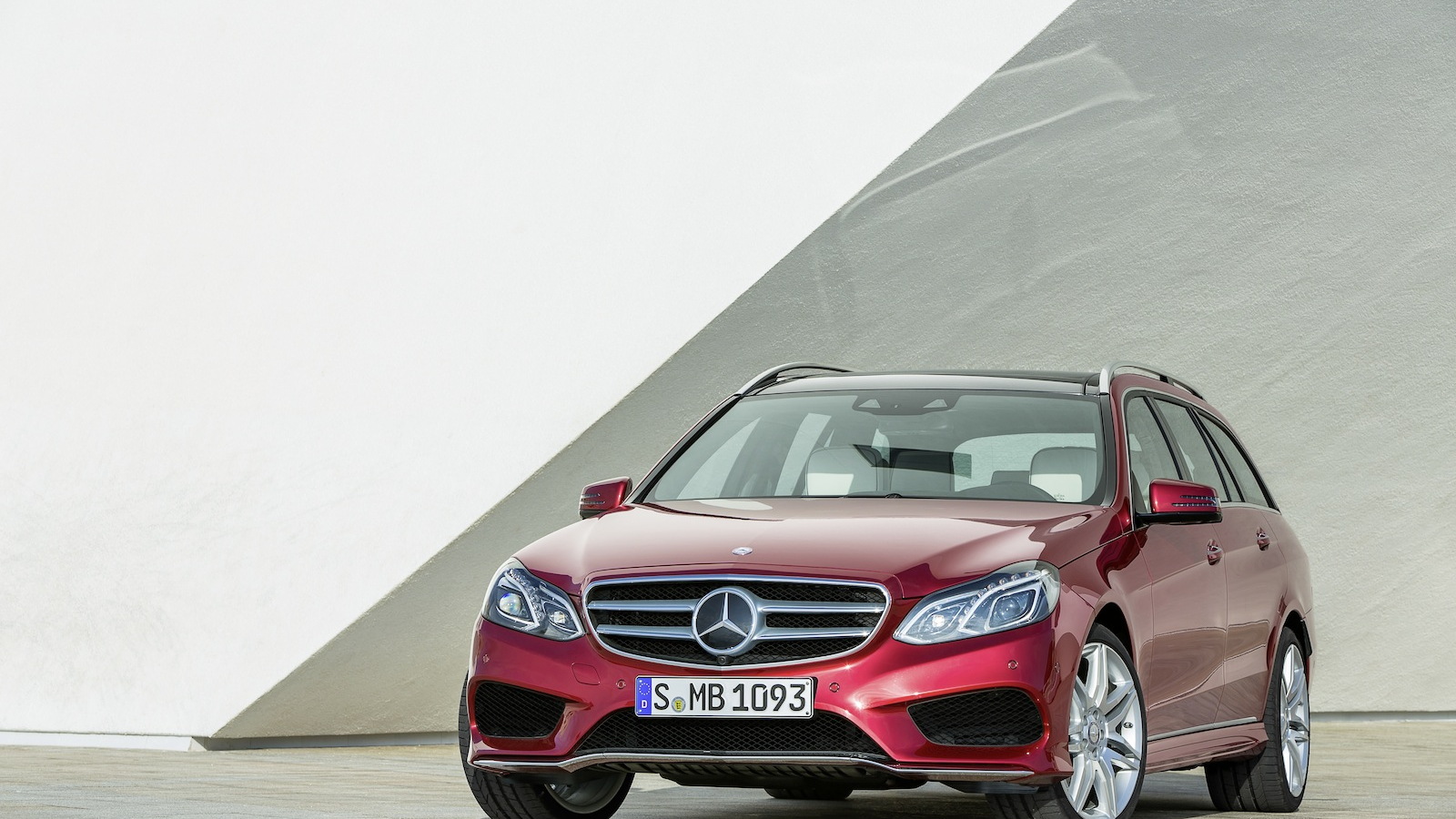 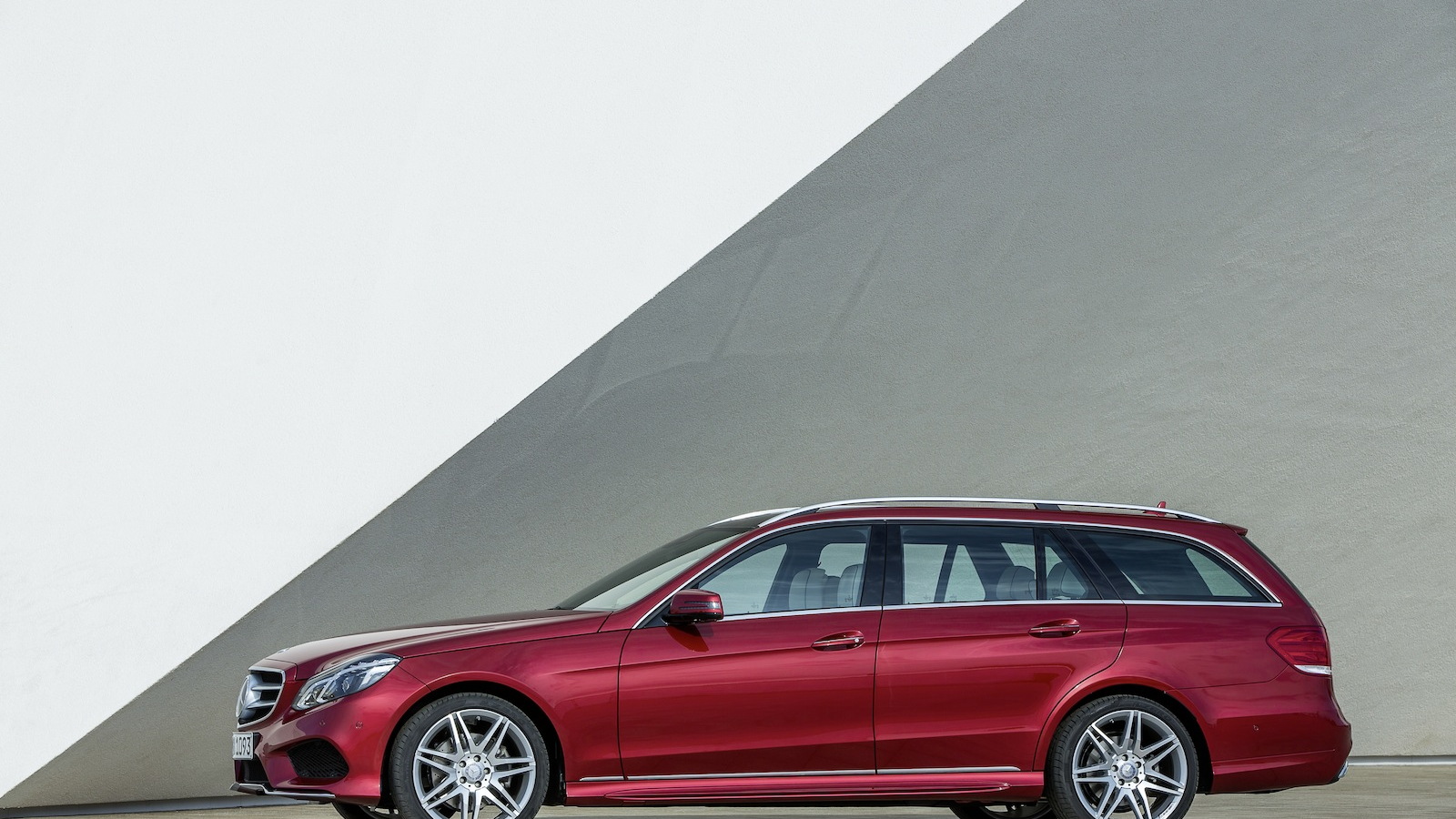 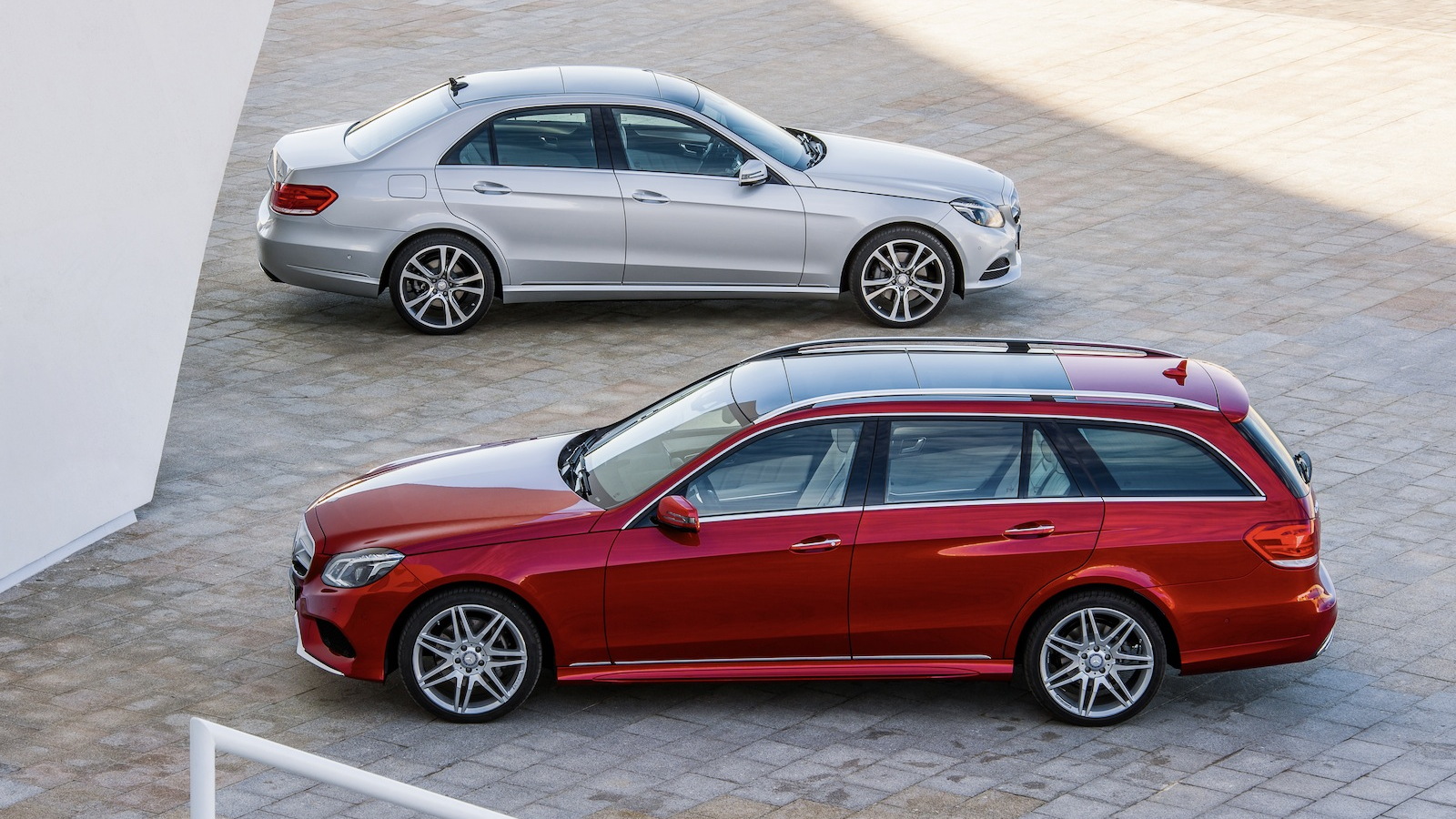 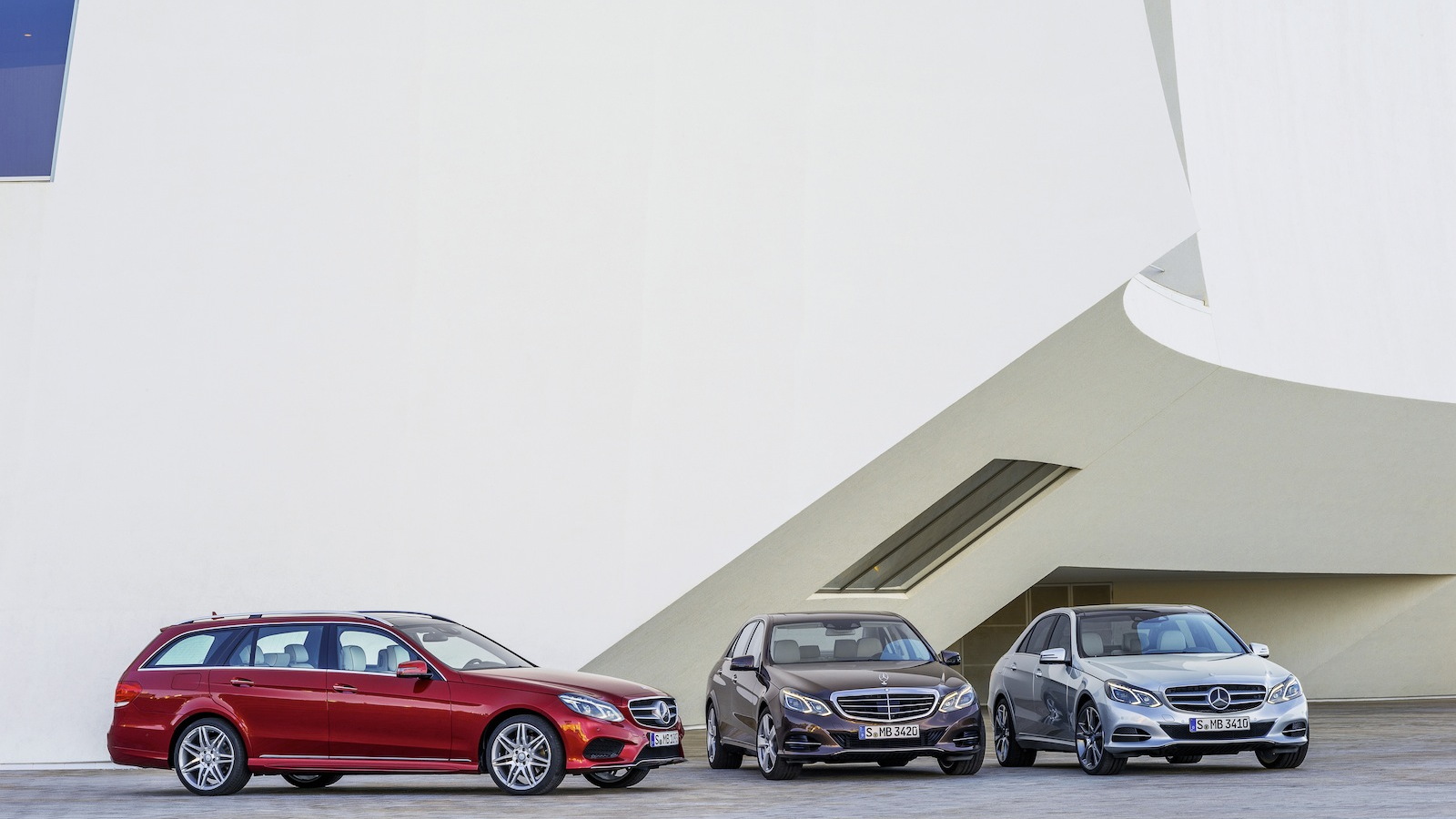 32
photos
Mercedes-Benz's E Class traces a long and storied history through post-war Pontons and space race-era Fintails through to the W124, the first model properly called an E Class. Today, we get a new iteration of the E Class, and while it's not an entirely fresh start, it's an evolution.

Updates for the 2014 model year include a new look and new driver assistance systems, as well as a new diesel engine. For now, the E Class Sedan and Wagon lead the way, with the Coupe and Cabrio models likely to follow.

The first thing you'll notice is the disappearance of the Ponton-esque rear fender flares. Rather than bulging just ahead of the rear door cutline to draw a curve over the rear wheel arch, the new fender design starts its swell earlier, and does it with a smooth, flat contour that simply adds another strake to the two already present. The result is a smoother, cleaner look, which to our eye is more elegant.

At the front end, the changes are more numerous, but perhaps less immediately noticeable: the hood and front bumper get an entirely new design, smoothing out edges and opening up the air intakes for a more AMG-style look. Two grilles are available, a first for the E Class; the Luxury version gets a three-louver design with a star on the hood, while the Sport gets its own grille with an integrated star.

Inside, the 2014 E Class gets subtle updates, including a new two-part trim that spans the width of the dashboard, available in burl walnut or black ash wood. A new three-module instrument cluster, trapezoidal center stack display, an analog clock on the dash, and tweaked air vents round out the visual updates.

Known for decades as a leader in high-tech safety gear, Mercedes-Benz has long practiced the trickle-down theory: launch the technology in the flagship S Class, and slowly roll it out to other models as economies of scale allow. Here, we actually see a reversal of this role, at least in terms of production availability, with systems developed for the future S Class being rolled into the all-new 2014 E Class.

The latest additions to the E Class arsenal of automated assistance gear include DISTRONIC PLUS with Steering Assist. Aside from the annoying capitalization, the system brings a combination of sensors to bear on the road and the area around the E Class, paired with algorithms for detecting potential hazards as well as keeping the car in the lane, even in traffic.

A Stereo Multi-Purpose Camera sets two digital eyes at the front of the car at a 45-degree angle to help improve three-dimensional positioning of obstacles. Three-dimensional imaging can reach out up to 55 yards, while the overall effective range of the system is 550 yards.

Collision Prevention Assist, which uses a multi-mode radar sensor system to help prevent collisions combines with Adaptive Brake Assist to help reduce the likelihood of rear-end collisions. The new systems integrate with previous systems like Attention Assist, which is itself enhanced to detect a wider range of drowsy and inattentive driver behavior. Other advanced safety systems available in the E Class are: Pre-Safe Brake; Pre-Safe Plus; Active Lane-Keeping Assist; Adaptive Highbeam Assist Plus; Surround-View Camera; and Active Parking Assist.

In Fall 2013, an E250 BlueTEC with 4Matic all-wheel drive will become available, offering a four-cylinder diesel to the E Class range. Rated at 190 horsepower and 369 pound-feet of torque, the E250 BlueTEC promises good, if not scintillating, performance while maximizing fuel economy. The E250 BlueTEC was first shown as a concept in 2009.

The E400 Hybrid will also be available, pairing a 3.5-liter, 302-horsepower V-6 engine with a 27-horsepower electric motor for promised gas mileage of 24 mpg city and 30 mpg highway.

All engines are mated to a revised seven-speed automatic transmission with Direct Select and paddle shifters. New to the seven-speed auto is a "short-term M mode" that allows the driver to shift up or down manually, then go back to normal driving without taking further action to return the transmission to automatic mode.

As usual, 4Matic all-wheel drive is available throughout the E Class lineup.

Though Mercedes hasn't released any official specs about the upcoming 2014 E63 AMG Sedan and Wagon, it has confirmed the cars will come with the Speedshift seven-speed MCT transmission and 4Matic all-wheel drive in the U.S. Full details on the E63 AMG models will come next month at the 2013 Detroit Auto Show.