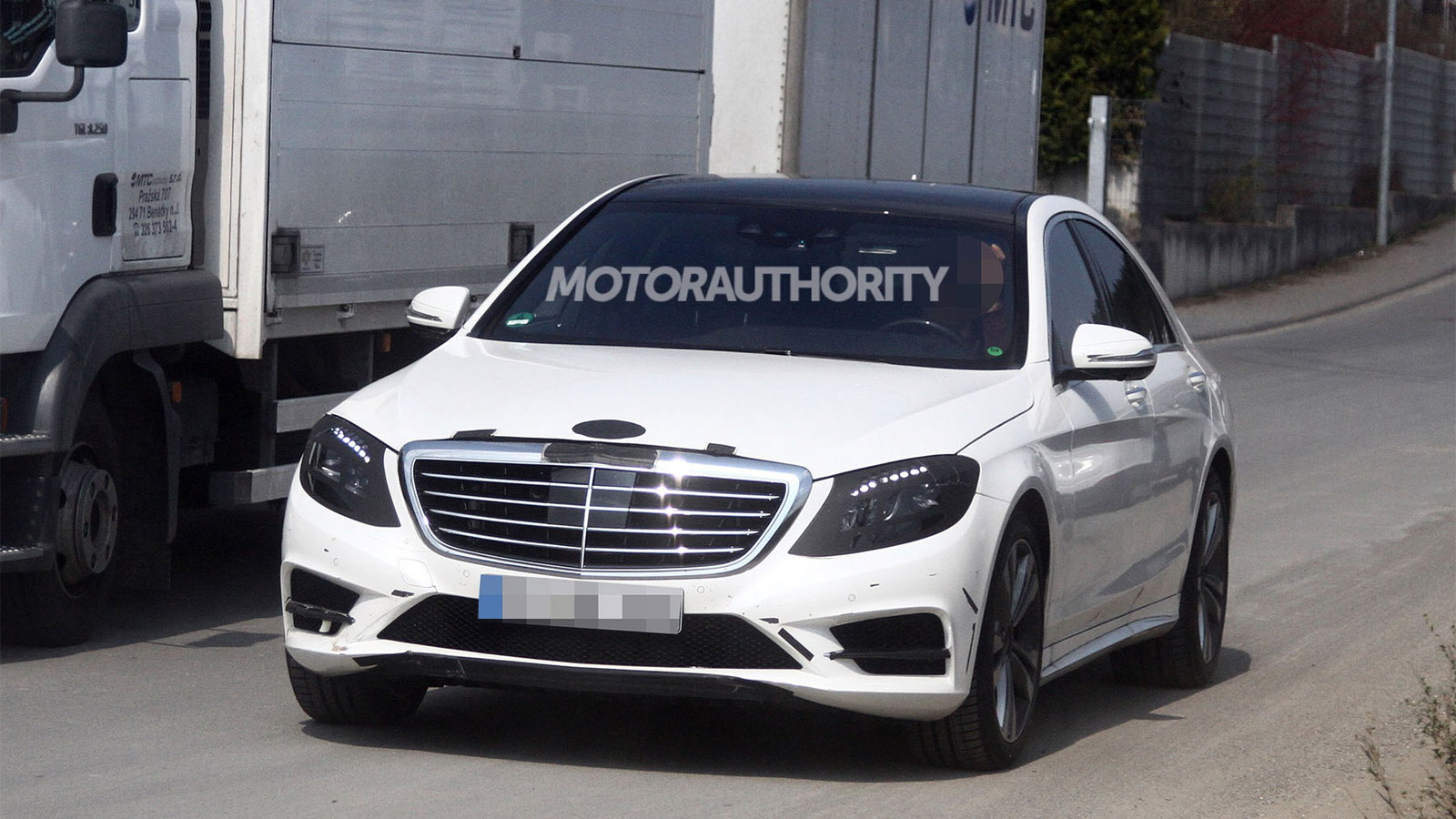 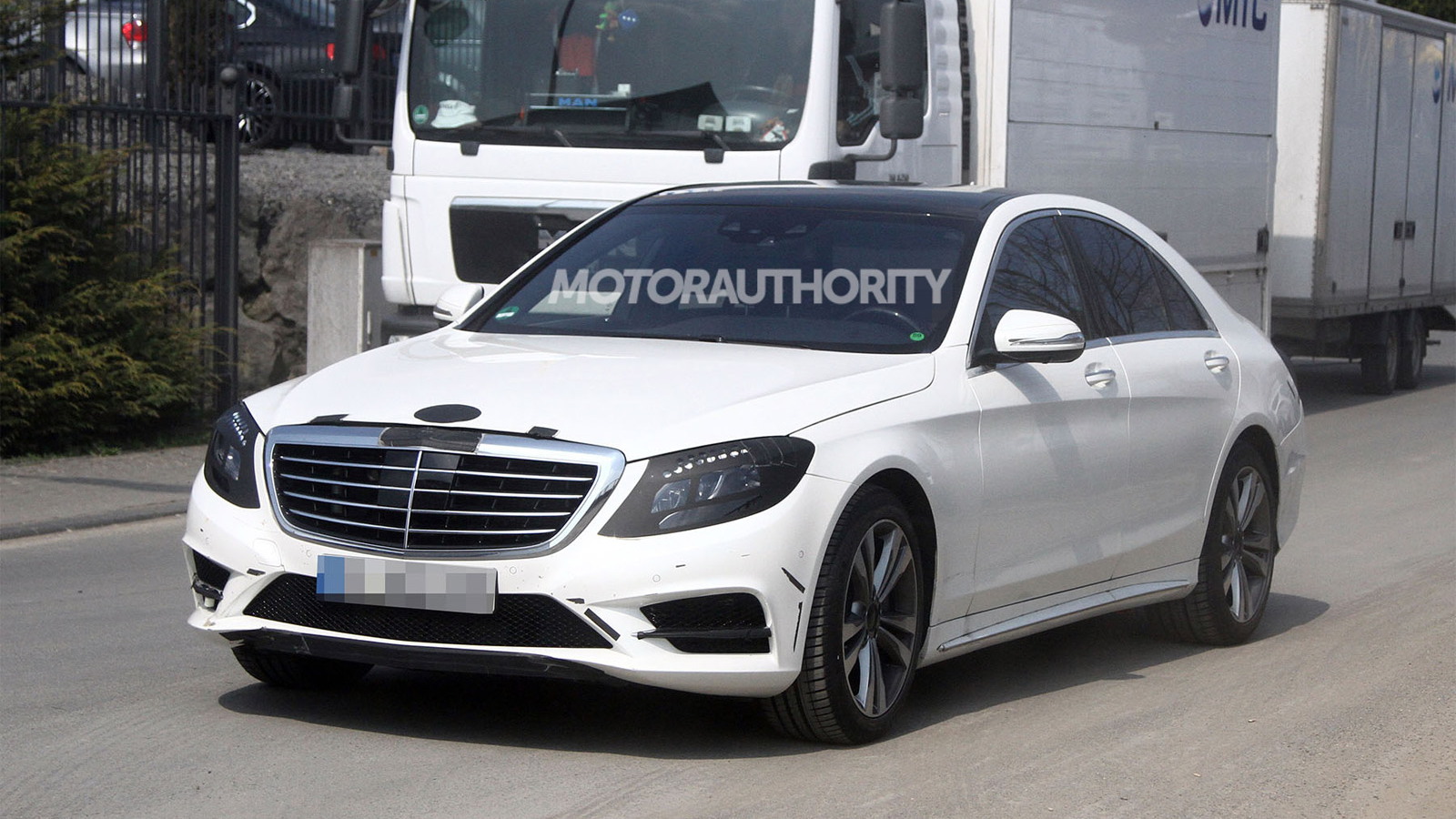 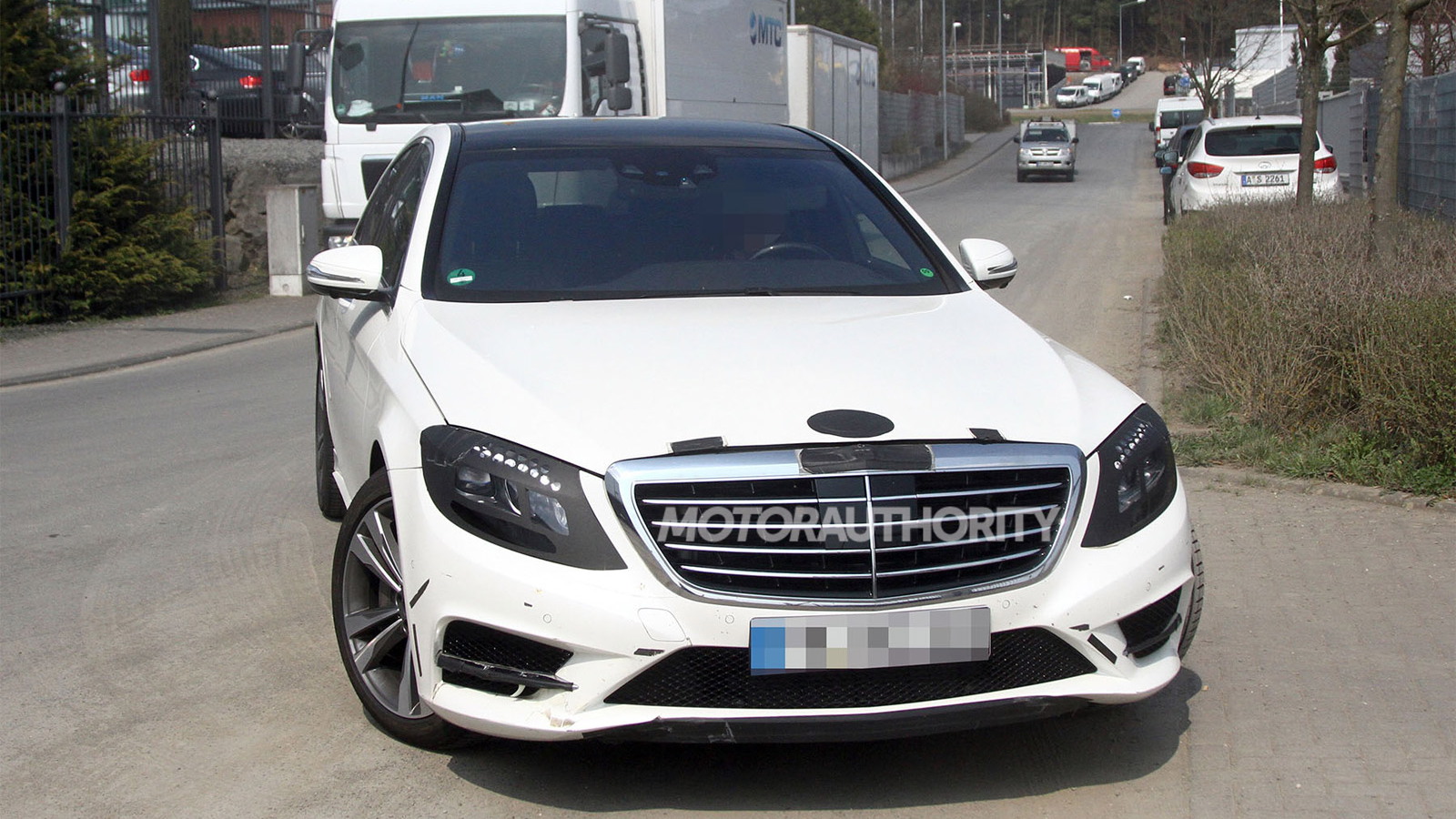 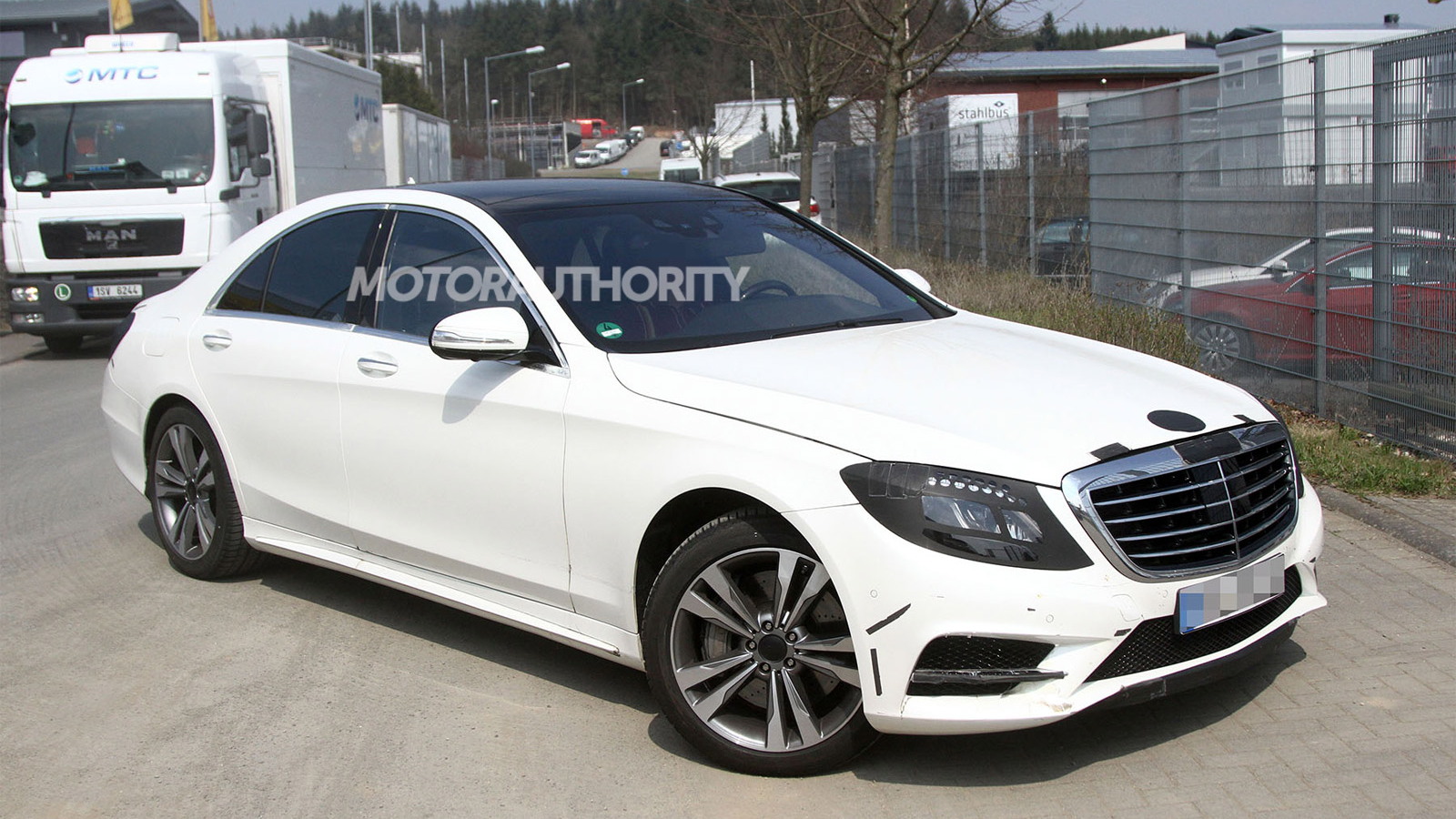 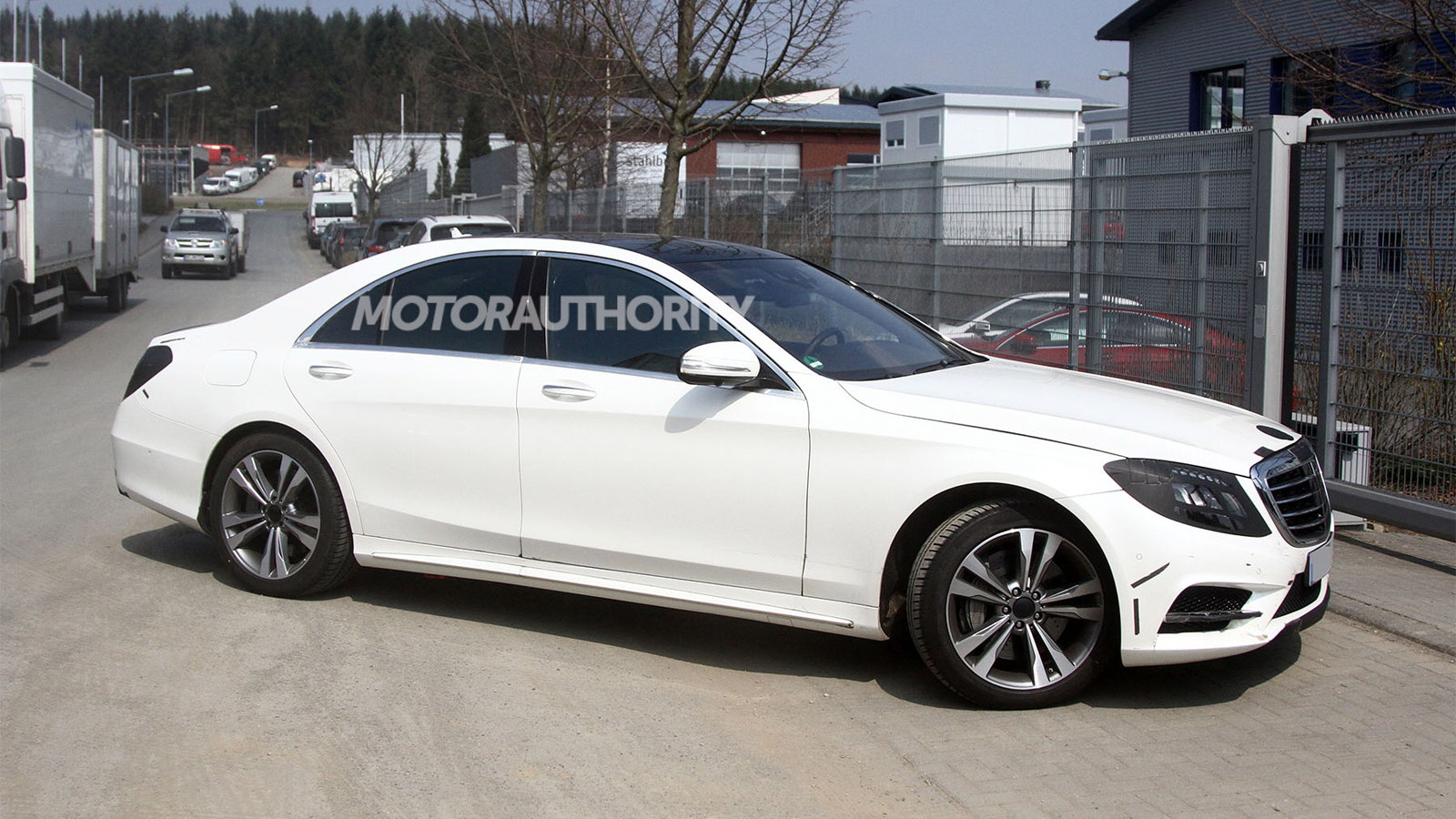 42
photos
UPDATE: The 2014 Mercedes-Benz S Class has been revealed. Click here for all the details.

Mercedes-Benz’s next-generation S Class, the W222, is set for its official debut next month, and with the reveal so soon it appears Mercedes’ engineers have become a bit lax with the amount of camouflage gear they use on the last of the prototypes.

This latest example, spotted just outside Germany’s Nürburgring, is wearing the least amount of camouflage we’ve seen yet, virtually revealing most of the new car’s details.

We can clearly see new LED daytime running lights and indicators, which on the new S Class appear to be at the top of the headlight. The grille is also completely revealed and appears much larger than the unit on the outgoing car.

Mercedes-Benz has already given us a preview of its new S Class’ interior, revealing a blend of modern and traditional elements. The most striking feature in the cabin is the new twin-spoke steering wheel design.

Set to land in showrooms later this year as a 2014 model, the new S Class will continue the flagship sedan’s tradition of debuting the latest in automotive technology. However, it will also break with tradition by offering for the first time new coupe, convertible and extra-long Pullman variants, the latter replacing the discontinued Maybach line.

This will also be the first production model in history to feature fully autonomous control. We were recently able to test the new S Class’ autonomous system and found it to be very impressive. The aim of the technology, Mercedes says, is accident-free driving, which it hopes will become a reality within the next decade.

Other new technologies include active brakes with cross traffic monitoring, rear accident injury minimization and new lane keep technology that can read broken as well as solid lines. The car will also be the first with LEDs used entirely, including even in the vanity mirrors.

The new S Class looks to be slightly longer than the outgoing model and should come packed with a range of fuel efficient engines as well as a new plug-in hybrid option, though this latter option is unlikely to be available at launch.

While it's still too early to confirm any details, R&D boss Dr. Thomas Weber has previously stated that a series of direct-injected and turbocharged engines will make up the powertrain lineup for the redesigned car, which means you can expect a similar lineup to what’s currently on offer.

Weber has also previously revealed that the plug-in hybrid powertrain from the 2009 Vision S500 Plug-In Hybrid Concept will also appear in the W222 series S Class. The technology promises 0-60 mph times of less than 6.0 seconds but with fuel economy of 70 mpg or better.

As for the car’ styling, Mercedes is going with a more timeless look that some may find a bit conservative. The sweeping curves seen on its flanks, first previewed on Mercedes’ Aesthetics S sculpture, were designed to mimic the curves on iconic Mercedes models like the 540K.

As mentioned, expect a reveal of the new 2014 Mercedes-Benz S Class next month, with sales to start in the second half of the year.

While you wait for its arrival, be sure to view our exclusive spy video of an earlier prototype at the Nürburgring.