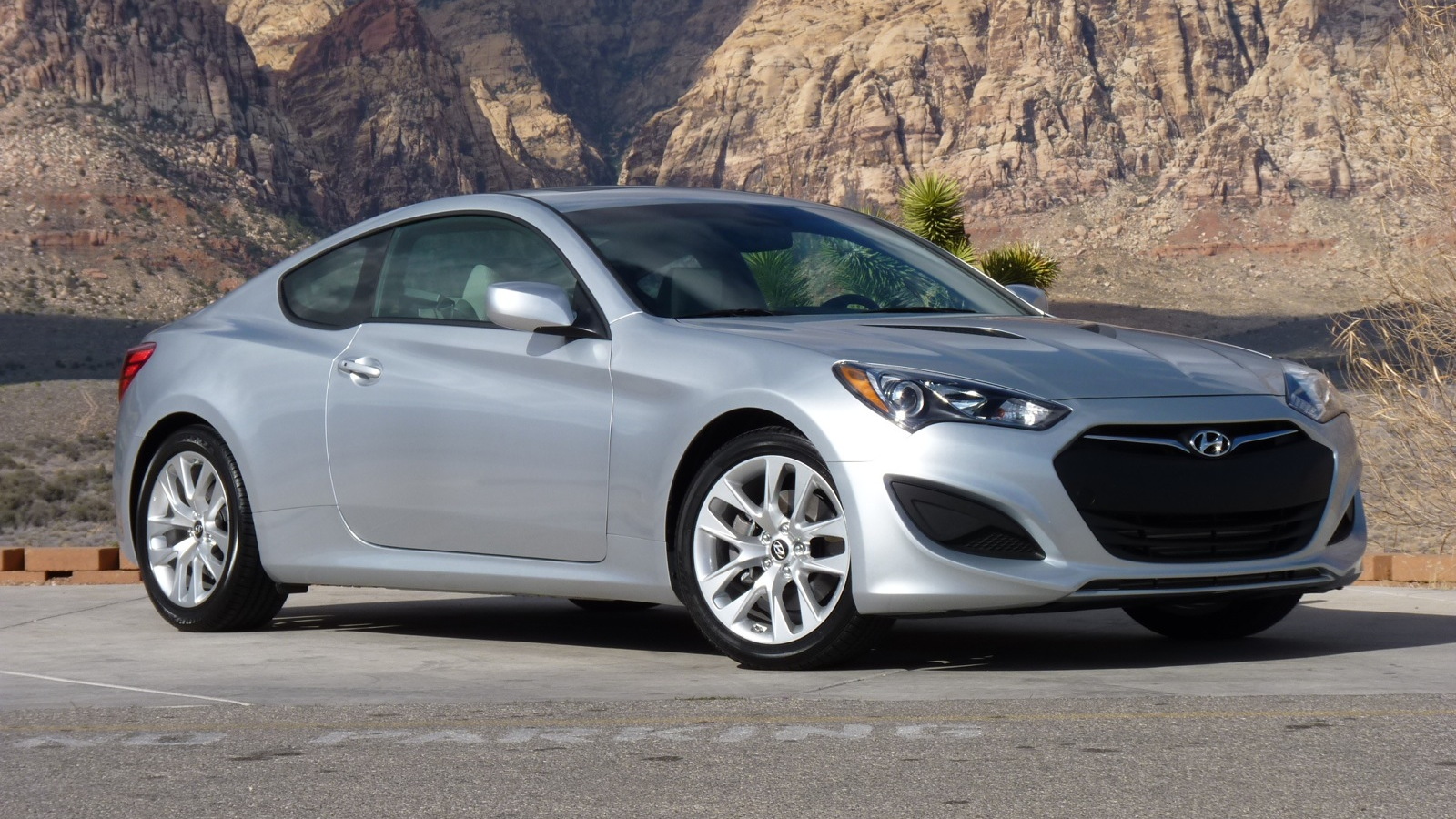 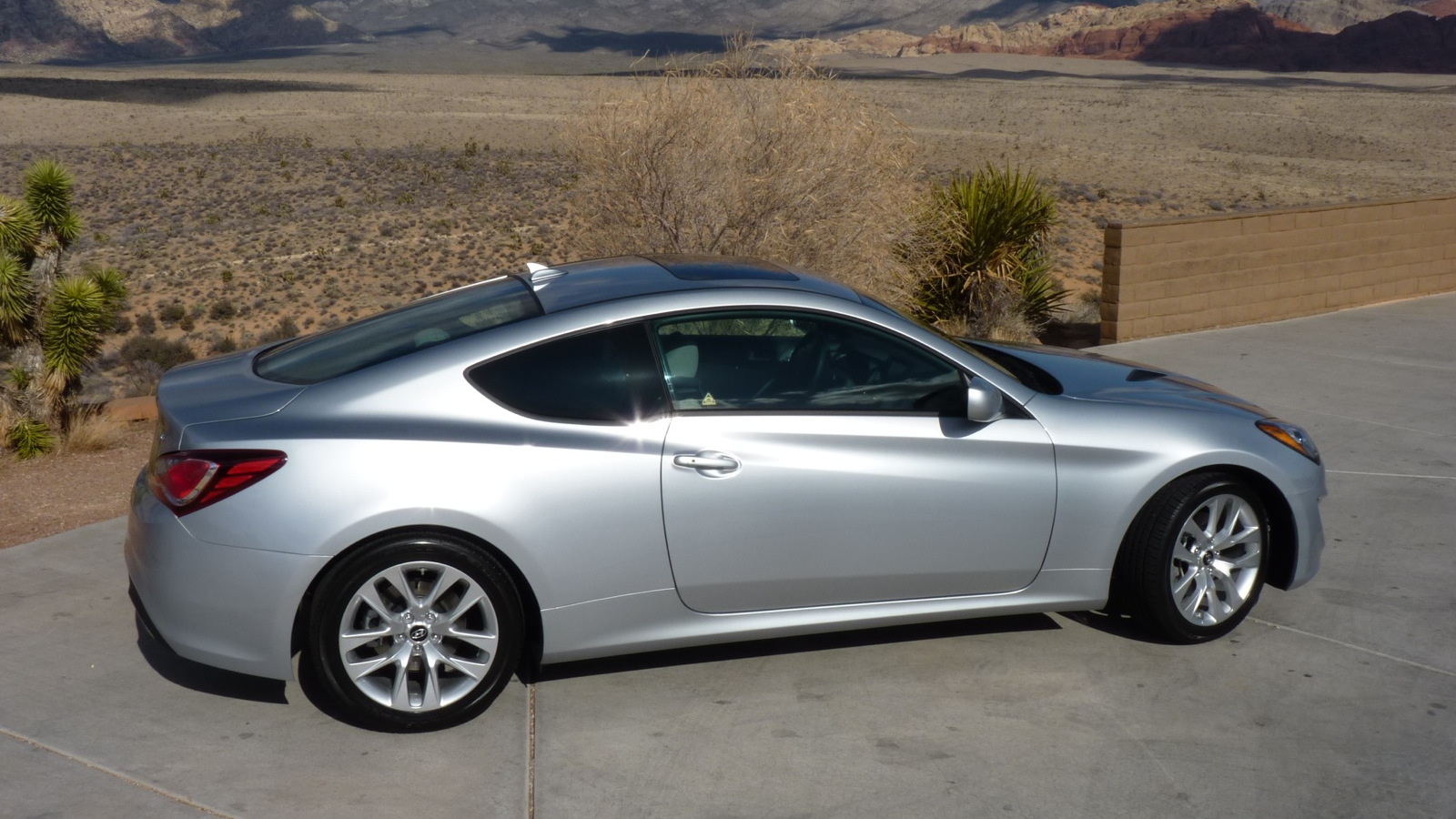 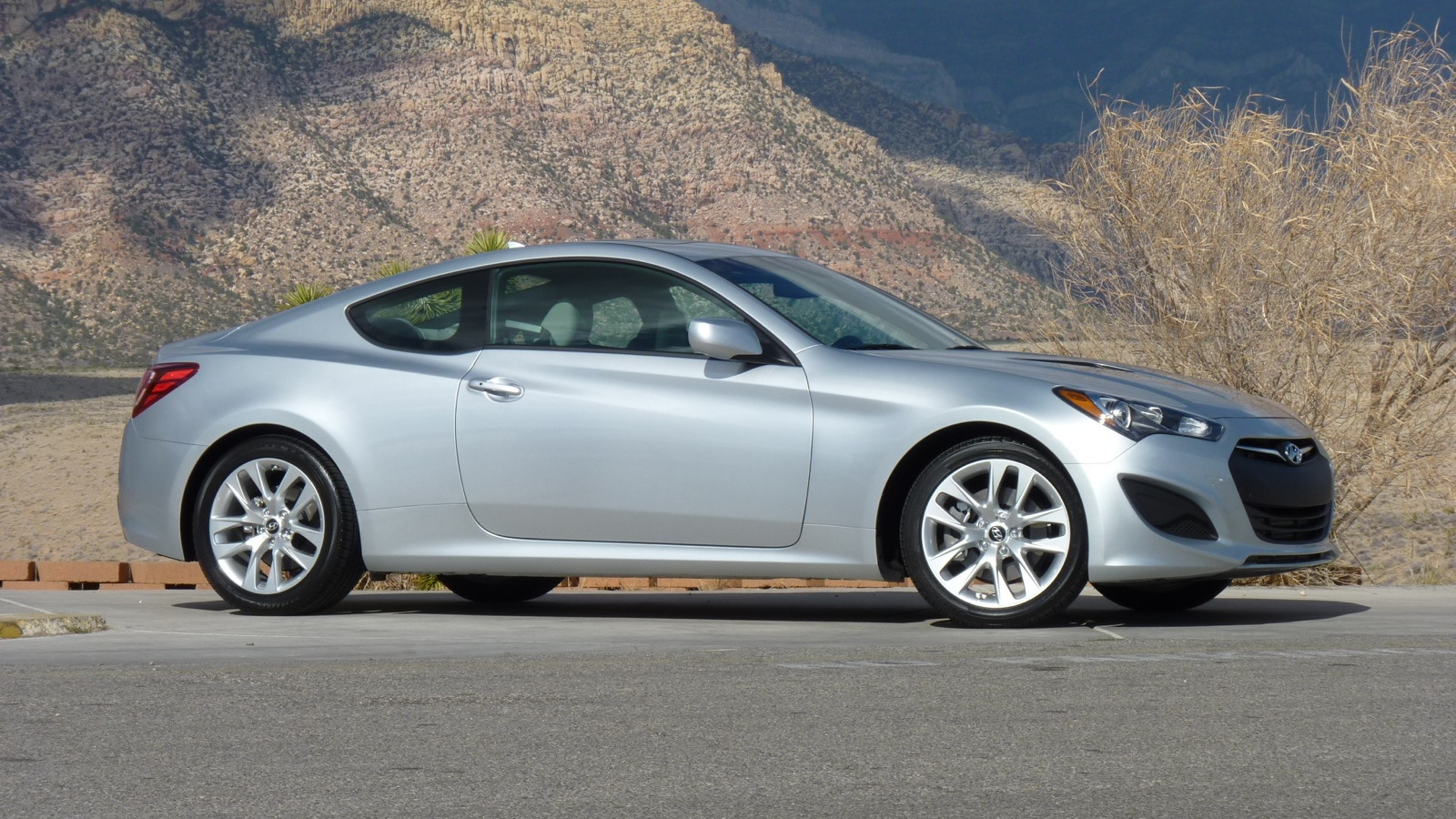 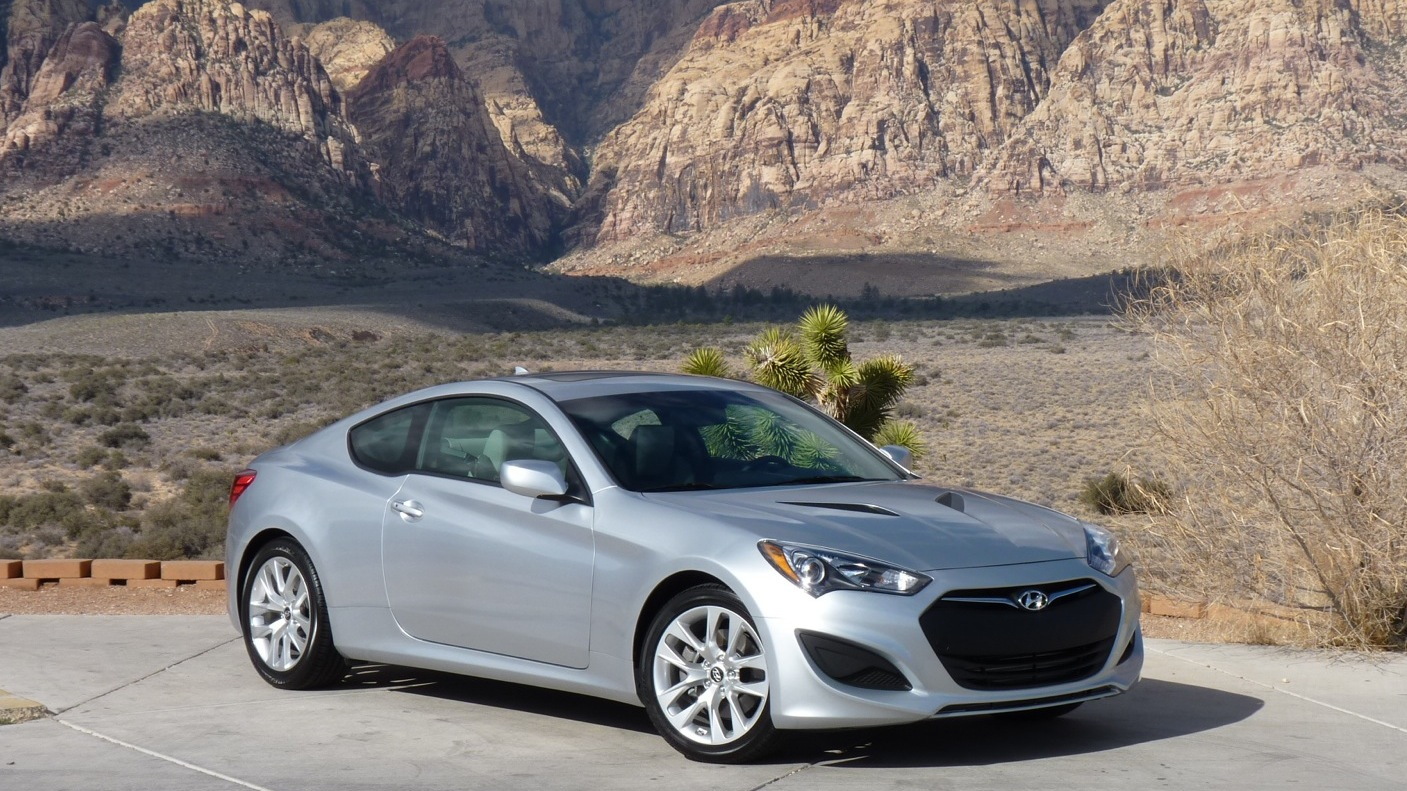 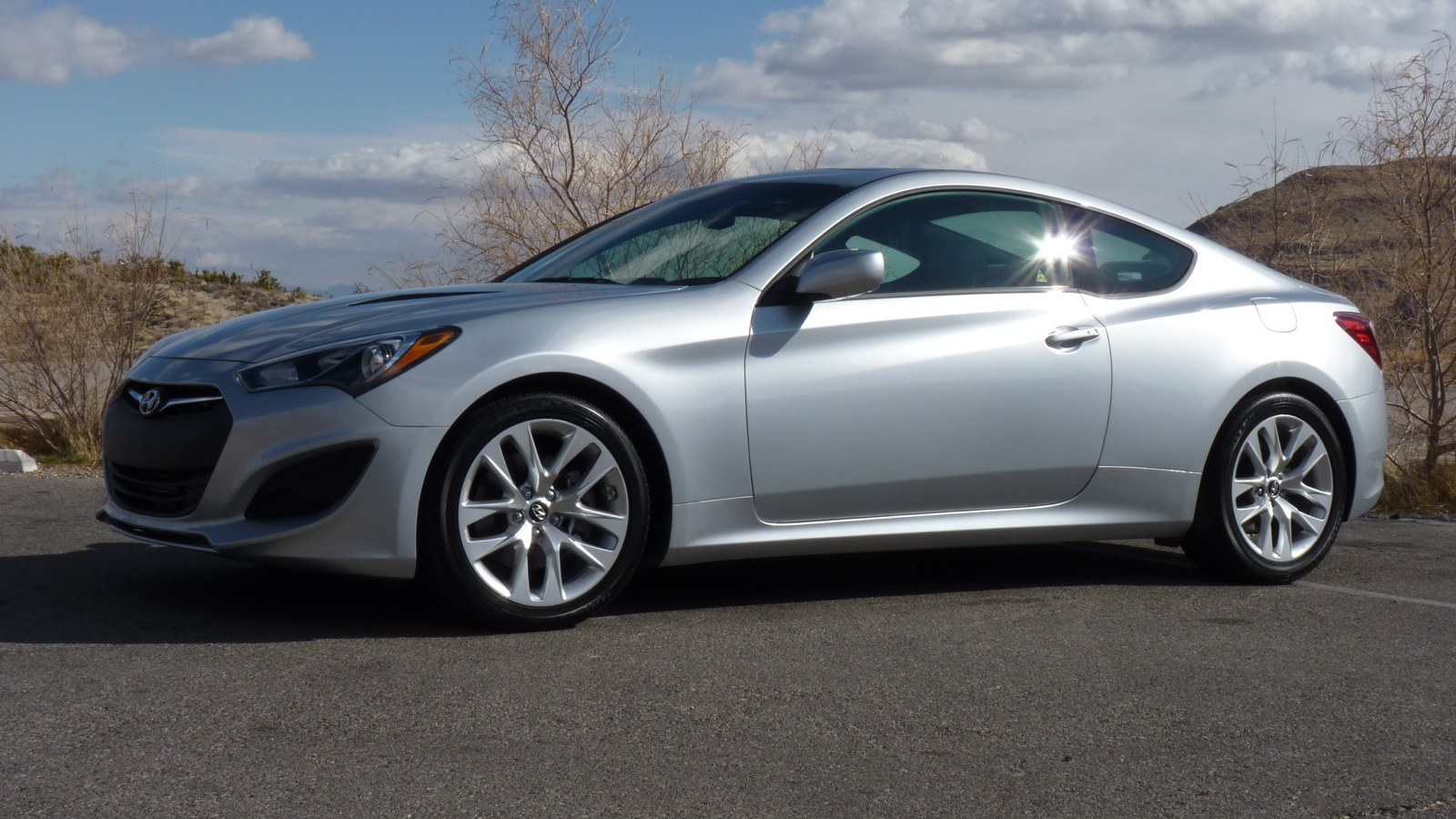 34
photos
In recent years, Hyundai has surged toward the top of the sales charts because it plays so strongly to value-minded shoppers. It’s done well in sensible metrics like reliability, resale value, and satisfaction; achieved good safety ratings; and offers a strong list of features for the money on all its cars.

That’s all fine and dandy. But the 348-horsepower Genesis Coupe is in some respects positioned as a true sports car; and for sports cars the priorities are a bit different.

With its current Genesis Coupe it's shown that it understands that; but with the substantially refreshed 2013 Genesis Coupe, it’s truly put the right game face on. And just a couple of hours on the road, combined with several more hours on the track, was enough to reconfirm, emphatically, that the Genesis Coupe is not only a completely different beast—in a good way—than Hyundai’s sensible sedans, but also a serious contender for those who love to drive.

To sum how the Gen Coupe drives—at least for those who've been around sporty cars for a long time: Extrapolate how classic Japanese sports-car models like the Nissan 240SX or Toyota Supra might drive if they were still made today, and you won't be far off the mark.

Thankfully, very few of the front-wheel drive Hyundai driving characteristics from the Elantra or Tucson or Sonata carry over into the Genesis Coupe. The shift action is clean and precise, clutch takeup is neat (both are improved for 2013) and, most importantly, the steering is a tried-and-true hydraulic system, tuned just right.

And then there are the engines. Just as in the 2012 Genesis Coupe, the 2013 model offers a choice of turbocharged four-cylinder or naturally aspirated V-6 engines. While they’re the same displacement as last year’s engines (2.0 and 3.8-liter), that’s about where the similarities end. The 2.0T engine now gets a twin-scroll turbocharger and larger intercooler, so that it makes 274 horsepower and 275 pound-feet of torque, with peak torque reached at just 2,000 rpm, and a new Lambda direct-injection V-6 in the 3.8 models makes 348 horsepower and 295 pound-feet of torque.

With either engine, you have a choice of a standard six-speed manual or Hyundai’s new eight-speed automatic, which includes paddle-shifters.

The two engines have different personalities on the street, and those differences are amplified out on the track. Like so many of the newer turbocharged fours with twin-scroll turbo arrangements, 2.0T doesn’t require you to work it the way that you had to in the last-generation Genesis Coupe; and probably because of that, it’s considerably less boomy and coarse in its personality. You can simply roll into the throttle and tap into a wave of torque that takes you all the way up the rev range. Slam the accelerator down rapidly though, and there's only the slightest bit of lag. Meanwhile, in the 3.8 versions, the new Lambda engine responds to the throttle much quicker—and more energetically, of course—than its predecessor. It’s not intensely torquey down low in a muscle-car sense, but it’s an engine that you ‘get’ right away, with a nice build of power and torque up the rev range.

Also adding to the 3.8 models’ appeal—Hyundai hopes—is that it’s added a sound box essentially to make the V-6 more vocal inside the car (by literally piping some of the engine sound into the cabin), without making the neighbors irate. This sounds a little boy-racerish—and we were skeptically expecting something along the lines of old Chevy Eurosport resonators—but it's well executed, with a rich, sonorous note not kicking in especially vocally until you're deep into the throttle or in the engine's upper ranges.

Hyundai has carried over the Genesis Coupe’s existing suspension layout, with a dual-link MacPherson strut front suspension and five-link independent rear—with a Torsen limited-slip diff in R-Spec and Track models—but it’s fine tuned the setup for better, more predictable body control and better control over rough surfaces; in addition dampers have been completely reconfigured and retuned to improve ride quality in those performance trims. And, surprisingly, the stabilizer bar thickness has actually been reduced—for better performance, as well as a better ride.

On the track, or on the highways around Las Vegas—mostly smooth and untouched by frost, snowplows, or temblors—we couldn’t really put that to the test. But from what we gleaned, the new dampers make a difference on rebound, and over rippled pavement surfaces such as those on freeways in Southern California.

While we left the stability control fully engaged on the road—of course—we selected traction mode for most of our track driving, as it still allows anti-lock braking if you get too out of line, yet lets you drift somewhat or get the tail out without intervention, and without cutting engine power (new to the 2013 model).

But the suspension tweaks show, even on the smooth track. If you overshoot apex, you can ‘manhandle’ the Gen Coupe back into position by nailing the throttle and countersteering, taking advantage of all that additional torque. But push ever-harder into a sweeping corner, and all the tuning improvements shine through; you can rather precisely, ever slightly, rotate the tail to maintain the right trajectory—and have a lot of fun with it.

Overall, there’s less snapping of the tail than we remember observing with the former car in lifting off, and the rear end feels a little more fluid, a little more confident. As before, staggered-width tires help provide that balance, too.

We never came close to feeling any fade from the strong Brembo brakes (four-piston and ventilated, front and rear) offered in the Track and R-Spec models, either. In either of these two performance forms, the Genesis Coupe feels ready for track day, off the dealer lot. You might also want to get the dealer-installed (bolt) camber adjustment.

By the end of the day, we had a clear favorite: the 2.0T R-spec with the six-speed manual gearbox. It’s not quite as quick as the 3.8-liter (and it doesn’t sound as nice), but almost—it weighs about 200 pounds less—and the clincher, really, was that it seemed to transfer its weight more gracefully when going hard into a corner. Oddly (and we say this as it’s a turbocharged, rear-wheel-drive coupe), it felt a little more forgiving, a little more confident.

While the Genesis Coupe calls out to those with the urge to get out to the autocross course or the occasional track day, it's remarkably well suited for double duty as a reasonably comfortable commuter. The seats are pretty good, and there’s headroom and legroom for most drivers. Hyundai has also added telescopic steering adjustment. Back-seat space is undeniably child-sized; but the trunk is pretty impressive (it’s shallow, but long), and the Gen Coupe has the solid makings of a weekend touring car that won’t elicit dreaded complaints about comforts from your companion.

We’ve covered the Genesis Coupe’s cosmetic changes already in depth in our preview, and in the full review over at The Car Connection—and you should browse through the attached galleries. But it comes down to this: If you at all took the previous Genesis Coupe for a test drive, the 2013 version might feel like a complete redesign, not a refresh, from the instant you first step inside. That's because Hyundai has facelifted the cabin where it counts: the instrument panel, the trims, and many of the details that the driver looks forward onto. On the outside, the more aggressive grille and airdam, new headlamps and hood altogether give it a more premium look, complemented in back with the new LED taillamps. And of course the palette of colors and materials has been completely revamped.

On top 3.8 Grand Touring and Track models, as well as 2.0T Premium models, there's a seven-inch navigation system on offer; it includes the Blue Link suite of services, as well as HD Radio.

The price is right, too. For just $25,125, you get a remarkably fun-to-drive rear-wheel-drive coupe, with standard equipment including Bluetooth, an iPod/USB interface, keyless entry, A/C, and a trip computer. Step up to the R-Spec—the model we had out on the track—and you get a track-tuned suspension, 19-inch wheels on summer tires, Brembo brakes, a Torsen limi-slip, plus special badging and red-leather seat inserts, with a bottom-line price of just $27,375. And even at the top of the line—the 3.8 Track model—the price only edges slightly above the $35k mark (still several grand short of the base G37 Coupe).

Alternative to V-6 Mustang and Camaro—or even Civic Si?

If you want a modest back seat, and you find the garish, over-the-top styling cues and boulevard-bruiser image of the American muscle cars a turnoff, you don’t have many choices—especially if you’re not willing to step up to a luxury brand like Infiniti or BMW.

For shoppers on a budget, the Subaru BRZ (and especially the Scion FR-S) are on their way and will no doubt be tough rivals on the track against the Genesis Coupe 2.0T. The refresh came right in time, to keep the Genesis Coupe relevant and on top of its game. And we’re thoroughly impressed that Hyundai can play to a different audience—demanding driving enthusiasts—with such focus.