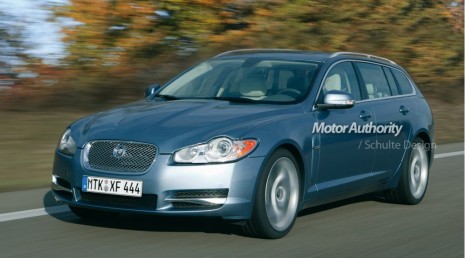 Over the holiday weekend, reports that Jaguar had confirmed the construction of an XF Estate (wagon) emerged. Today, it's the hotter brother, the XFR, that gets the long roof treatment, again according to chief designer Ian Callum.

This time around, Callum spoke with Dutch-language Autovisie, noting that the estate wasn't part of the original plan for the XF at all, but now that they've decided to make it, they're going whole-hog and dropping the 510-horsepower supercharged V-8 shared through many other vehicles in Jaguar's lineup, including the XFR Sedan.

According to Callum, designing the long-roof XF was tough, likely making the hotted-up XFR even tougher. We're glad the Jaguar team stuck with it, however, and we hope to see sales of the car herein the U.S., however unlikely that may be due to their slow sales compared to wagons in Europe.

Check out our shots from the New York Auto Show for look at the recently facelifted 2012 Jaguar XFR Sedan, which will share most of its gear with the upcoming XFR Estate.

As yet, there's no clear time line for the XF or XFR Estate unveiling.