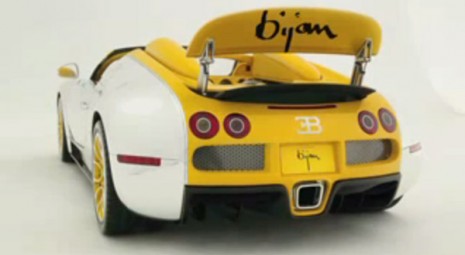 Bijan Pakzad passed away on April 16 of this year but just a few weeks before his untimely death the Iranian born fashion designer had completed work on a highly customized Bugatti Veyron Grand Sport. In tribute to the late designer, who was simply referred to as Bijan by most who knew him, Bugatti has released this video which features the automaker’s design director Achim Anscheidt showing the customized supercar and the key elements that make it so unique.

If you’re unfamiliar with the Bijan name, the fashion designer had his own boutique on Rodeo Drive in Los Angeles that you could visit by appointment only. Bijan was also an avid car enthusiast and would often park vehicles from his collection, most of which featured his trademark ‘Bijan Yellow’ color scheme, outside of his boutique.

Some of Bijan’s famous clientele include the likes of Michael Jordan, Carry Grant, Frank Sinatra and a string of presidents, current and former. Yes, even Barack Obama and George Bush are customers.

As for his latest customized Bugatti Veyron Grand Sport, check out the video below for all the details. Note that Bijan already owned and regularly drove a Veyron--and quite successfully parallel parked--which you can see in the second video posted below.