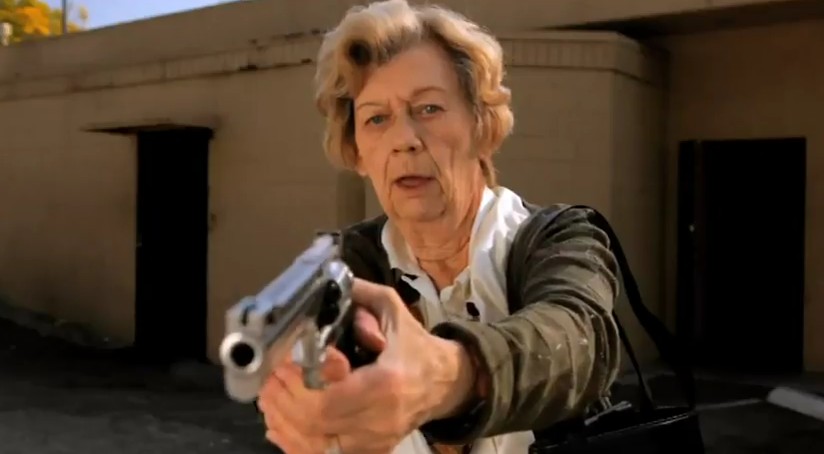 'Being Henry' promo for the Range Rover Evoque

It's Friday, the sun is shining (well, mostly), and yet, there you sit, stuck in your cubicle, slaving away for The Man. Of course, we'd never encourage you to play hooky, but we can suggest a pretty good way to goof off and still look busy. It involves a new choose-your-own-adventure game designed to promote the 2012 Range Rover Evoque.

The game is called "Being Henry", and if you remember those dog-eared choose-your-own-adventure books from childhood, the set-up will be familiar. You play the character of Henry, a workaday schlub who's out for a stroll on a sunny LA day. On his walk, he reaches a corner: will he go left, or will he step into the diner across the street? You're the decider. And, as you might've guessed, no matter which route you choose, things will spiral dangerously, hilariously out of control.

We have to admit, we were concerned about the Evoque when it debuted last year. Escorted by professional hungry person and former Spice Girl Victoria Beckham, we wondered, is this going to work?

A year later, and we're completely convinced. Land Rover's marketing division -- including the charming and talented Leah Watkins-Hall -- has continued to surprise us with fun, hip projects, like art installations coinciding with the 2010 Paris Auto Show and the recent video project headed up by indie darlings OK Go. Such eyecandy has been our salvation on many a dull Friday.

And now they give us "Being Henry" -- one of the best interactive pieces we've seen in a very long time. Not only are the stories themselves nicely told, but the game works well on a technical level, too. That's rare for something this ambitious and bandwidth-heavy. Kudos to the troubleshooting team.

To take a stab at "Being Henry" yourself, zip on over to HelloEvoque.com/beinghenry. If you don't have time to sit through the full game, here's a video preview that'll give you a taste of what's to come.

LAND ROVER TAKES ON THE WORLD OF FILM WITH THE LAUNCH OF 'BEING HENRY', AN INTERACTIVE ACTION –LOVE – FANTASY – COMEDY – ADVENTURE ABOUT CHOICES

MAHWAH, NJ – May 5, 2011 – Today, Land Rover will push the boundaries of its traditional customer communication with the latest offering from its Range Rover Evoque Pulse of the City project; an interactive Hollywood inspired film about choices.

Filmed in Los Angeles and unprecedented in scope and creativity, 'Being Henry' is a fun, interactive and engaging film that brings to life the unparalleled variety of options available with the Range Rover Evoque. Just like the Range Rover Evoque has been developed to stand out from the crowd, the film presents the consumer with a number of unexpected and exhilarating adventures to engage with, inviting them into the urban world of the Pulse of the City.

Based on the original 'choose your own adventure' style of storytelling but bringing this concept into the digital age, the film takes the consumer on a wild journey during which they are invited to make choices for the character that consequently decide his outcome. With nine different storylines and 32 unique endings, the variety of choices and diverse consequences that occur ultimately result in the creation of the consumers 'subconscious' perfect Range Rover Evoque.

"I am really inspired by projects that push digital boundaries, and in creating interactive work that is designed to emotionally and creatively engage rather than be purely driven by technology, says Gordon." As a director I want to explore interactive pieces that are also filmic. Range Rover's commitment to one of the most adventurous collaborations I have ever been part of has been incredible, and 'Being Henry' has been a real learning curve for me on how creative interactivity is the future of really engaging with and respecting consumers."

The story begins with its hero Henry, an everyman-type character who has to make various decisions during his journey that lead him into different realities. It is made immediately apparent to the consumer that they are in control of how Henry carries out his day, and via a voiceover that guides them through the film, they are presented with a number of life-changing choices. Will they choose to shoot rats with Grandma? Or lead Henry to be kidnapped then tortured with a harpoon gun?

Cleverly, the film takes the choices that the consumer makes on behalf of Henry and translates them seamlessly into their perfect Evoque. Through subtle color, situational and emotional references, the film effectively takes elements of the consumers personality and uses them to present them with their fully personalized car.

The Range Rover Evoque offers more personalization choices than any other Land Rover, with a huge number of options in terms of interior packs, body and roof color combinations, wheels and enhancement accessories, as well as the fact that there are three models (Pure, Dynamic, Prestige) that can come in Coupe or 5-door versions.

Customers can tailor their Range Rover Evoque with a tempting array of design, trim and technology options, so that each car meets their own taste and lifestyle. The choices range from designer exterior packs, contrasting colors on the roof and spoilers, immaculately-trimmed designer interiors, and a range of desirable technologies to maximise comfort and enjoyment on board.

The Range Rover Evoque will go on sale in September priced from approximately $46,000.

Nick Gordon is an award-winning director of music videos and commercials, who has worked with major brands such Levi's, Sony, Doritos, Skoda, Cadbury's, Nokia and Honda; and directed promos for Placebo, Roni Size and Supergrass. During his association with Academy Films and Somesuch & Co. he has won a slew of awards, including five D&AD Yellow Pencils, BTAAs, Creative Circle Awards and British Television Advertising Craft Awards. His short films have also been highly acclaimed, winning selection to some of the world's most prestigious festivals and earning representation by the British Council.