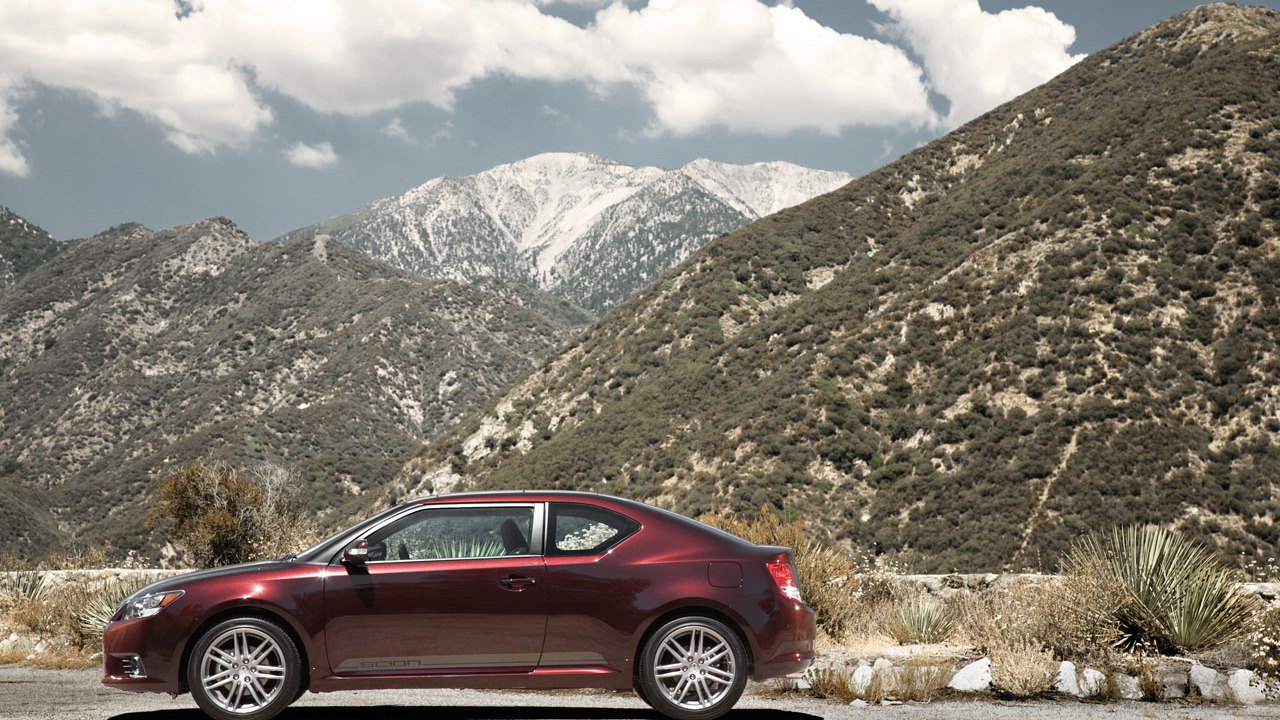 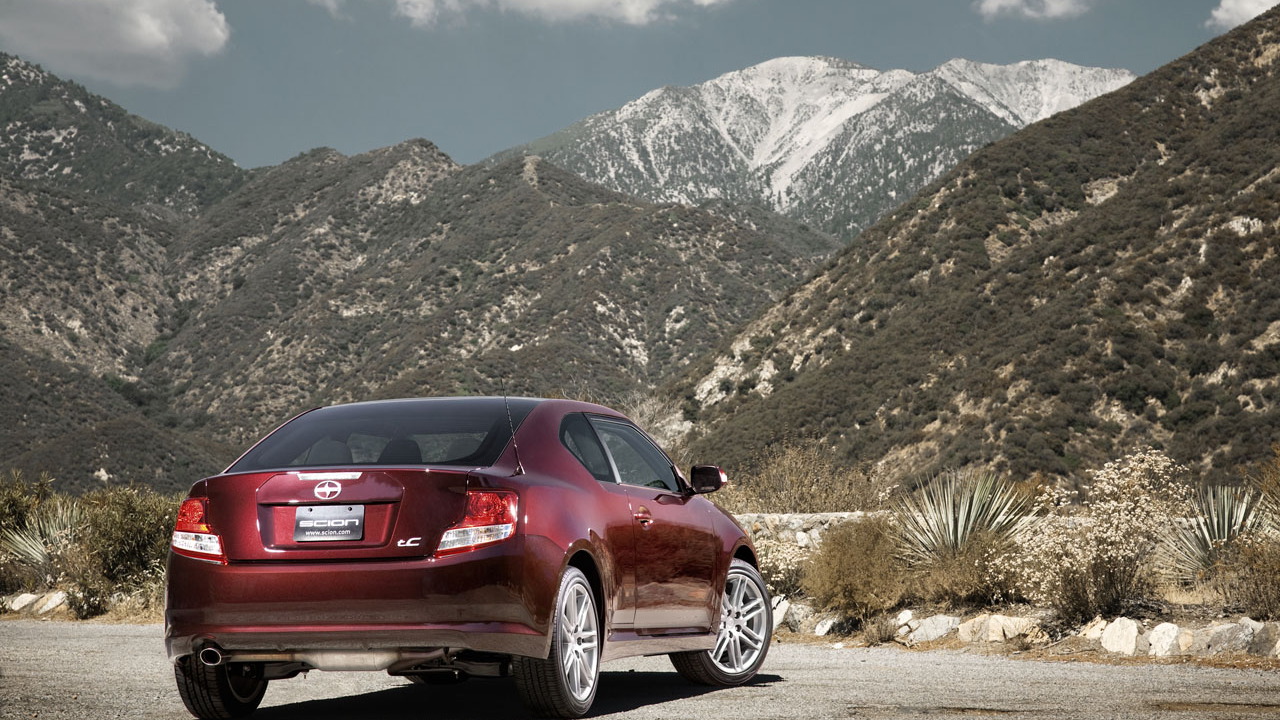 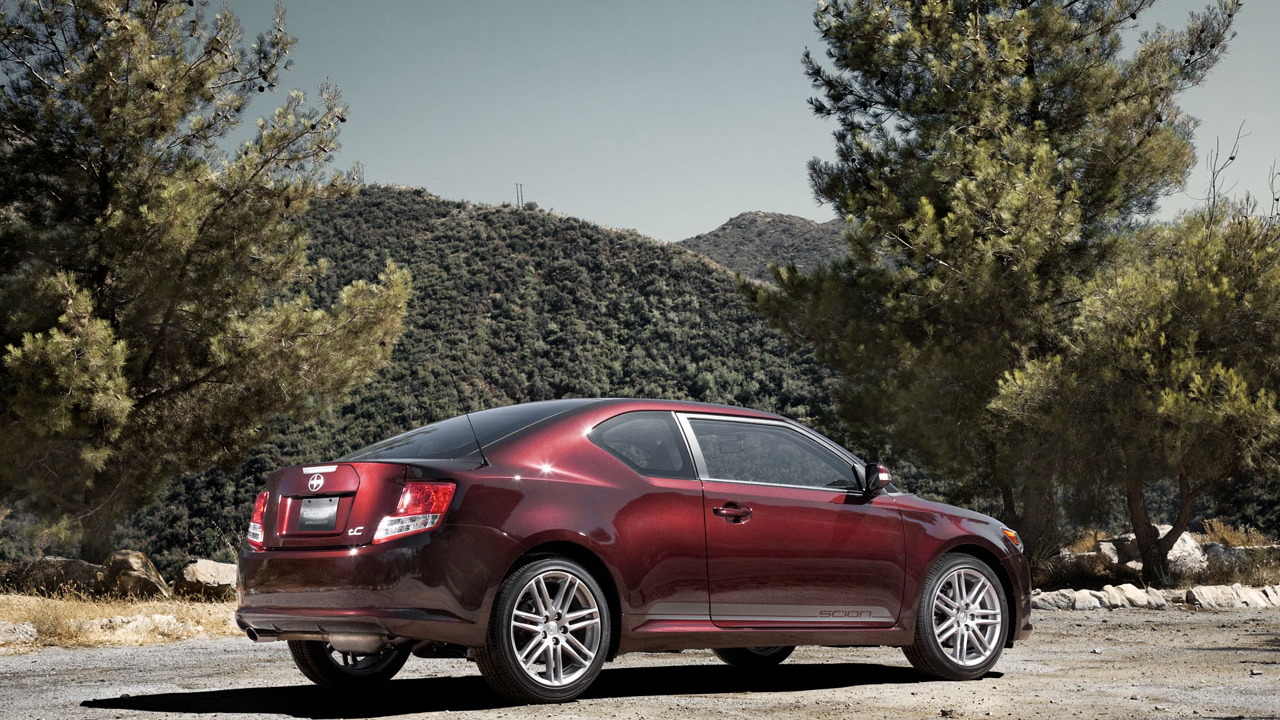 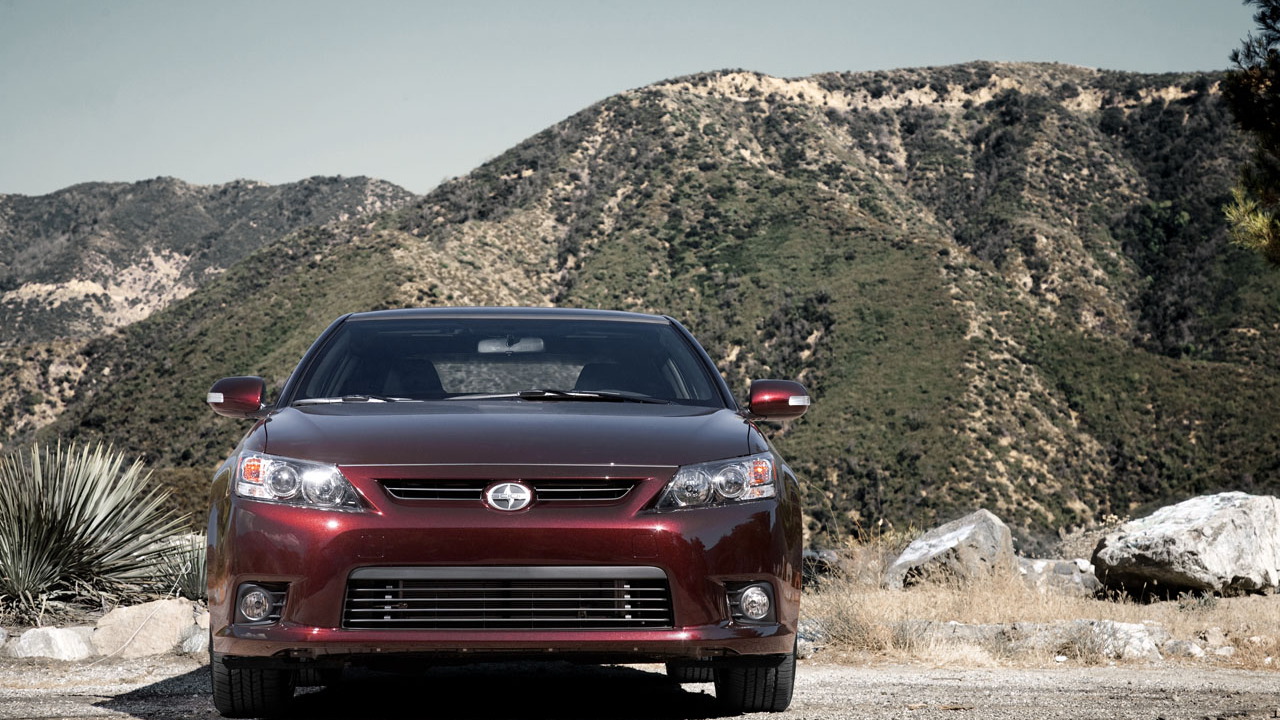 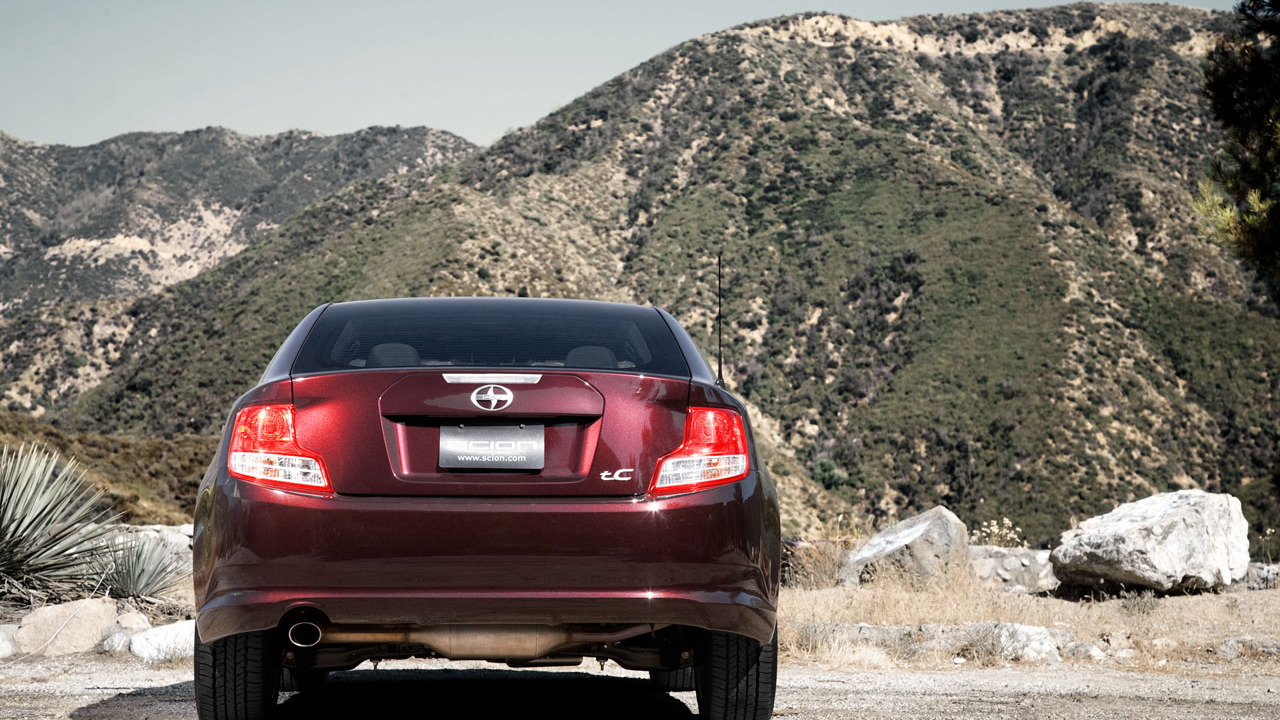 This will be a partial defense of the Scion tC.

I find myself in this odd position having read Bengt Halvorson’s less than glowing overview of the car.

Mind you, I get where Bengt’s coming from. The tC has been upgraded, but it’s a poseur in the cheap two-door sports car market; he rightly says it doesn’t have the chops of either the V-6 Mustang or the Hyundai Genesis Coupe.

So why defend the tC? Because that narrow, sub-$20k sports coupe slot in the market is fading for a reason. Young buyers simply haven’t been exposed to enough tossable, speedy machines. They’d sooner slam Civics than drive off-the-rack, and who can blame them? There are no cheap, sports cars for them to choose from. Heck, if you’re under 30 today you may be just as likely to have experienced  BMW or Porsche as a brand that builds SUVs. And that’s just sad.

Which is why I’d argue that even if the tC isn’t the car motorheads would like it to be, it is sporty looking, and reasonably fun. Call it a “safe” car to love, regardless of your gender.

If you think “safe” is hardly a ringing endorsement of all that’s good in the automotive world, you’re not thinking this argument through. I personally want a lot of young men and women to buy cars with some semblance of a soul, so that in the future carmakers don’t ditch the notion of passion altogether. Nope, that’s not a full-throated endorsement of the tC. You won’t get that here. But you will get an honest take on this car’s attributes and weaknesses.

The ride
The 2011 Scion tC is positively glued to the road. It get’s a 1.3-inch wider track in front and is 2.1 inches wider at the rear, and rides on 18-inch, rather than 17-inch tires and its electrically boosted steering is light in behavior but not dead. You get enough feel from the front-driven wheels to make unwinding the bent-nuances of a country lane enjoyable. A Mini Cooper does this better; there’s no argument. But a Mini also has such a short wheelbase that it’s darty on the highway where the Scion tC is controlled, buttoned down. And, honestly, far less fatiguing over a long-haul day in traffic. You can argue that the Mini Cooper Clubman solves this, but that car is too expensive to be considered competition for the tC.

The trade-off is that the tC simply doesn’t like to rotate; it will plow like you’re bringing in the harvest. It also exhibits a surprising amount of torque steer from the 2.5-liter, 180hp four. That, at least, makes it possible to produce power oversteer, provided you kill the included stability control. Not that torquing the tC around corners is any faster than pushing wide of apexes, although it is somehow more entertaining.

Fun for the driver
My 2011 Scion tC was the six-speed autobox version, for $19,995 (base). This isn’t a VW/Audi DSG. It’s simply an automatic with a manual shift mode. Throttling down gears is a little poky, and you’re denied gears anywhere near redline. Leave the algorithmic fairies to the task of shifting and the tC’s transmission is commendable. At highway speeds its sixth gear is taller than that of the manual, too, so the car is quieter and gets a quite reasonable 31 mpg on the highway (23 city).

And while the Hyundai Genesis Coupe jumps to 60mph in 6.5 seconds, vs. 8.2 seconds for the Scion, the tC’s motor is smoother, with less thrash at higher revs and a much sportier exhaust note. It burbles at the low end and even manages to sound reasonably brash near redline.

Controls are also quite good for the driver. The steering wheel is squared off at the bottom, and meaty, and the brakes, enlarged over those of the 2010 car, are stout and linear. I found myself standing on them when a guy in a Chevy pickup bowled through his yield sign without even pausing. The strong reflexes of the little Scion probably prevented an accident.

But....
The interior of the tC is worthy of both praise and pans. Bengt’s complaint about interior plastics is valid, but the seats are great, both front and rear.

The bad? Don’t get the high-end seeming 300-watt Alpine head unit routed through a sophisticated eight-speaker audio system. The sound is loud, but it’s not detailed. Maybe loud is all you want, but navigating the interface of the head unit is maddening and in every way this controller/Nav system feels like an afterthought. Even the line for the satellite radio antenna had to be threaded out the right side of the hatch. Again, it’s possible the take rate on satellite radio is slim for Scion tC buyers, but this seems especially half-baked for a buttoned-down Toyota marque.

A last beef here: The iPod dock of the tC sits distractingly far back along the transmission tunnel, but the plug for the dock is at the bottom of the instrument stack, so your iPod is threaded from a cradle near your elbow and attached to an exposed wire that runs along the center console. Leave your iPod in your car and you’re leaving it visible to a would-be thief. I’ve driven several cars costing less than the Scion that have sequestered locations for iPods and neatly keep all wiring out of the way.

Some good
There are upsides to this cockpit, however. The front- and rear seat room is quite good and all four seats are comfortable, with the front buckets especially well bolstered. Taller drivers might complain about head room, but you need to be six-foot-plus and sit bolt upright to have an issue, and rear seat room is good enough for two sub-six-foot adults. Again, compared with the Genesis Coupe or the Mini, the tC comes out ahead for passenger space, and because it’s a hatchback, there’s little trouble flipping down the rear seats and getting decent utility from the car. I loaded up a few 2x4’s from the lumber yard, reclined the front passenger bucket, and stuffed the wood through from hatch lid to the dash. A Honda Civic offers yet more utility, but is less fun to drive.

A driver’s car?
Maybe it’s weak sauce to say the Scion tC bakes in just enough fun to be a smart buy. But on balance, for a buyer who needs some utility, wants a car that’s somewhat playful but isn’t primarily focused on performance, and can’t afford to bump up to either Mustang V-6 or Hyundai Genesis pricing (not to mention Mini, VW Golf, and other cars that do compete well on fun but cost just a bit more), the tC does have a lot going for it.

If I were to recommend one car to consider against the tC it might be the surprisingly enjoyable Ford Fiesta. It’s a little bit cheaper, handles a bit better and offers a decent, if slightly less refined interior. That said, the electrical bits of the Fiesta are more in keeping with a young demo. The SES model for $18,000 comes loaded with push-button start, heated front seats, and Ford’s Sync system that’s far more intuitive for connectivity.

Neither car will set a sports car fan’s heart aflutter, but that’s not the point. These are merely fun cars. And the world has a shortage of them. Scion should also be commended for making the tC better in every way—including making it a better driver’s car. Now Scion just needs to debut a real sports car at some point and everyone will be happy.