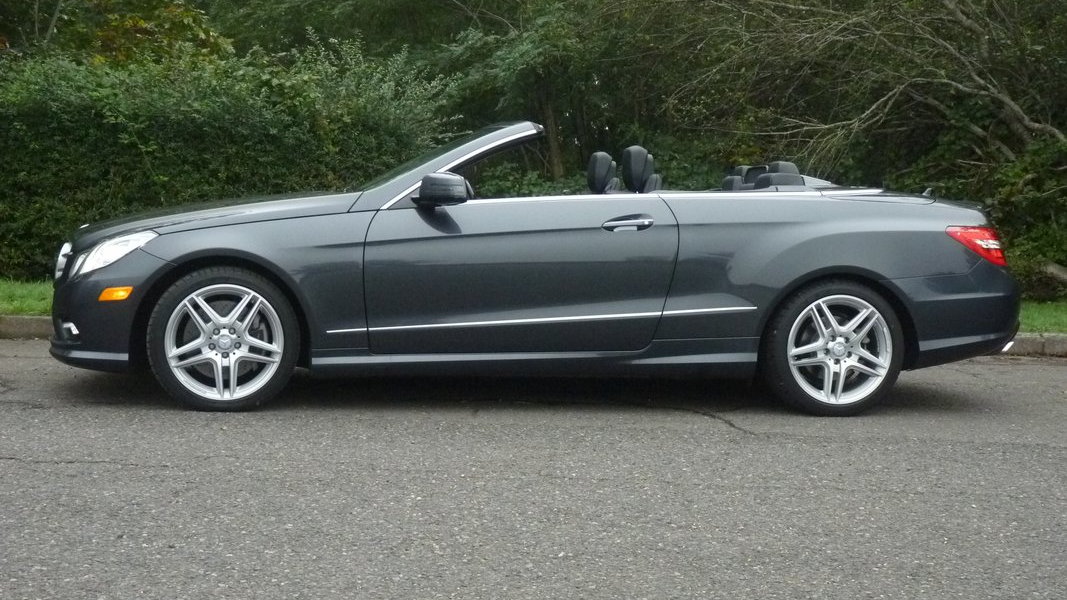 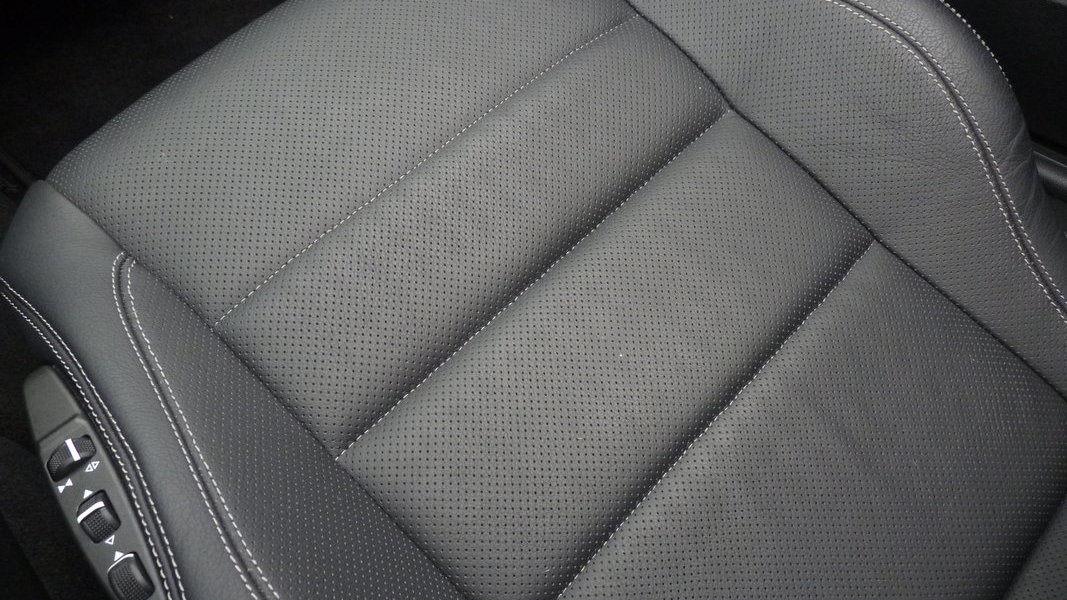 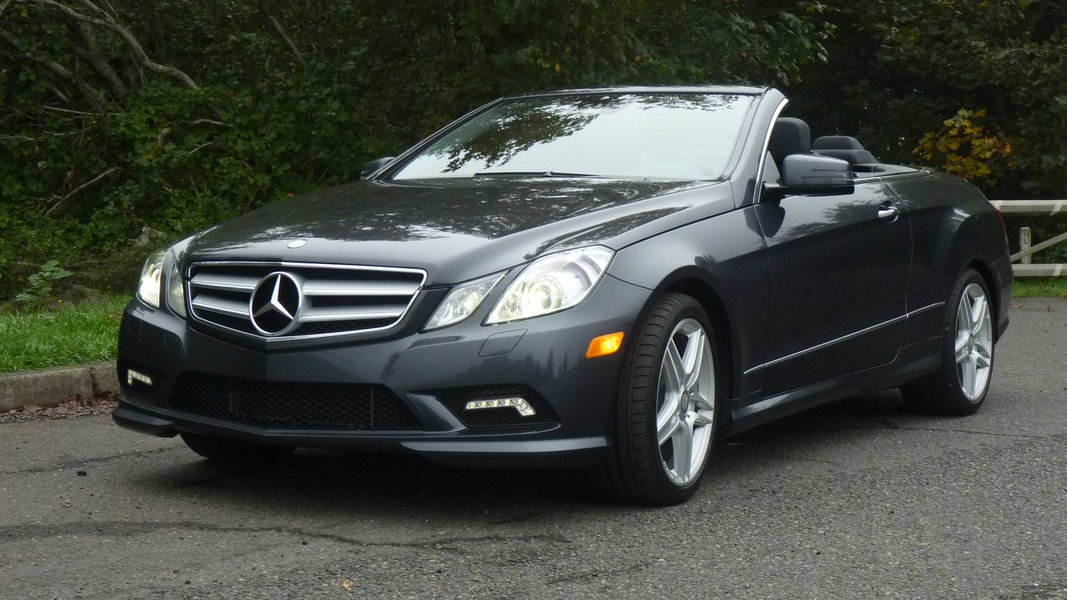 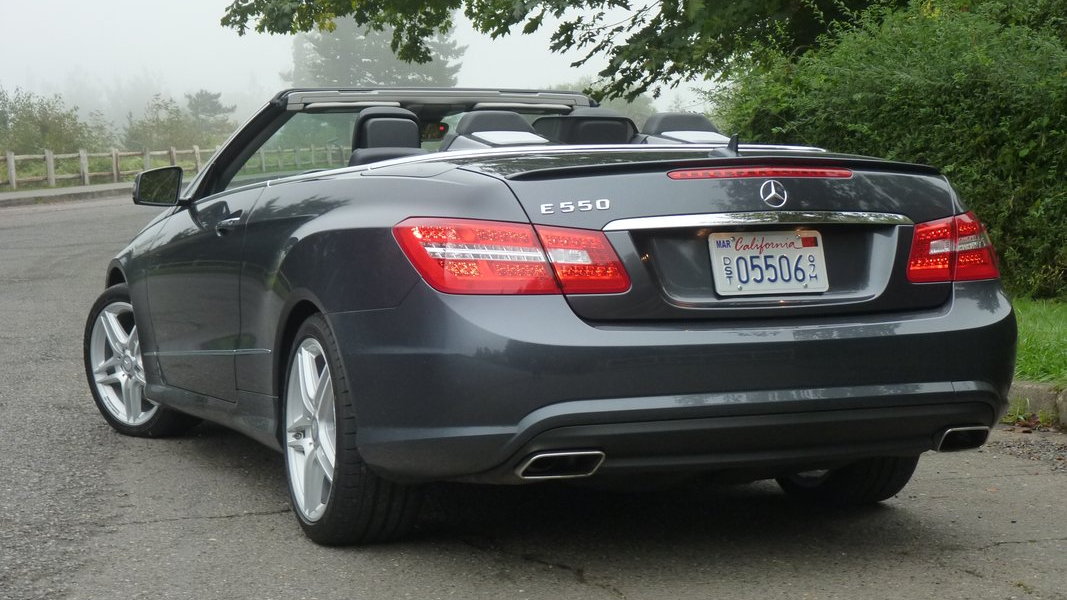 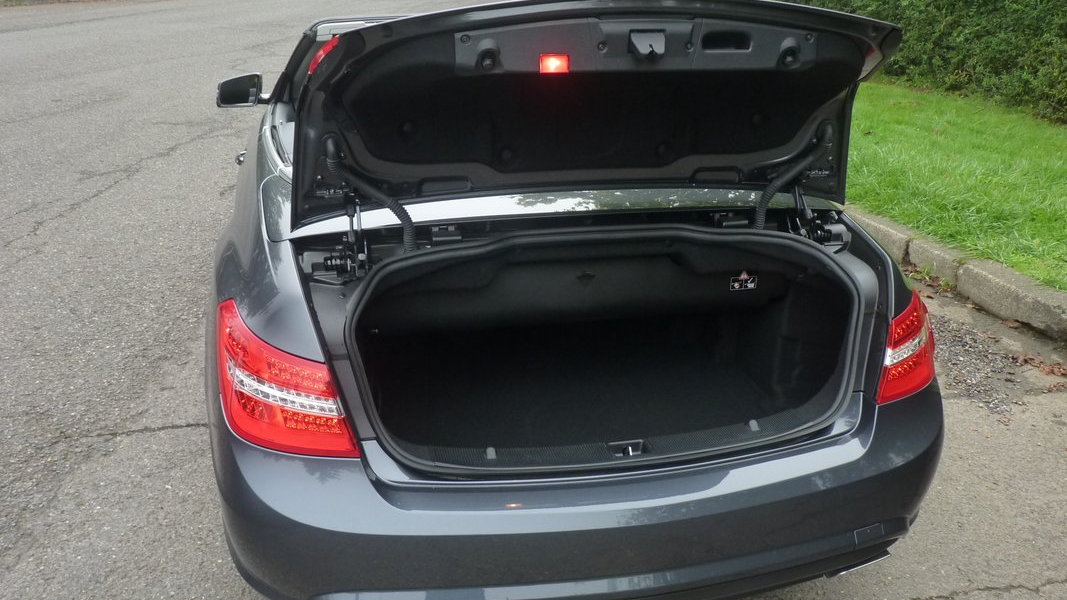 From pretty much every angle, whether you're following the chiseled, pointed front end, bold mesh-backed grille, and uninhibited three-pointed star in front; or the graceful fender crease in back, which rolls through with complexity to the rear lights; it's a beauty.

There's certainly that, but there's more. As I found when I had the chance to drive the E-Class Cabriolet a couple of times over the past several months, the E550 has a lot more attitude—and quickness—than you might think.

More attitude, and it's seriously quick

First off, the E550 doesn't have the strong-yet-demure, turbine-like character that's accompanied pretty much every other non-AMG Mercedes-Benz V-8 in recent history. This current one—making 382 horsepower from 5.5 liters—is a little more extroverted than we've come to expect, especially here in the Cabriolet. Just off its slightly lumpy idle, there's a deep, resonant bark, and rev toward the top and the V-8 sings out with a growl and a surprising bite, impressing as more than a little AMG-like.

It's fast. The E550 Cabriolet can get to 60 mph in the low-five-second range, according to track testing from several sources.

A seven-speed automatic transmission comes hooked up to the V-8 and seemed to adapt quickly to different driving styles—not at all wasting revs when we were just plodding along with traffic but holding gears a bit longer when we'd just been tromping it in the curves. Dial up Sport mode—which commands stiffer damper settings—and the transmission earns a little more eagerness. Paddle-shifters are there, but I only felt compelled to use them a couple of times.

The top-down experience in the E550 Cabriolet is disconcertingly serene. In a MX-5 Miata, for instance, a glance down at the speedometer at grin-inducing speeds usually reveals that you're not going as fast as you think. But in the E550 is an altogether different kind of spirited top-down car. Even with the top down, I found myself easing up for corners and hammering away at the straights, periodically glancing down at the speedo...and being a bit surprised at how fast I was going.

At less than 4,100 pounds (roughly the same as the Infiniti G37 Convertible), the E550 isn't at all portly by today's standards. If you can get past the leap of faith it takes at the helm (we only did briefly), you'll find the E550 to be quite tossable. While you could push the E550 through the corners surprisingly quickly, you probably won't want to; given the steering, and a suspension that does such a splendid job in keeping body motions down to a minimum, there's not much to indicate when you're approaching the limit.

The real enjoyment comes, again, when you bring down the pace a bit and cruise, enjoying the sensations that make convertibles so special. The second time I drove the E550, the weather was crisper and cooler, and with both heated/ventilated seats and Airscarf—which gently blows warm air around your neck—turned on and floor heat turned on, we were able to enjoy top-down driving quite comfortably.

Our test car had a sticker price approaching $80k. But that included some key features like Airscarf, as well as the premium sound system, navigation, and other extras.

Mercedes-Benz's COMAND interface continues to frustrate us at times, and while I'd recently connected my iPhone for Bluetooth hands-free in another Mercedes product, the COMAND unit in the E550 (even after device resets) refused to connect after repeated tries. But the navigation-system display is excellent, and the 500-watt Harman Kardon sound system seemed capable of playing nearly any kind of music with the sort of volume that could draw crowds.

The E550 has the sort of practicality that really does count in a convertible. Trunk space is adequate enough for a long weekend; a mid-size suitcase would wedge in, along with a couple of duffel bags or a computer bag. No problem. As for back-seat space? It was tight, of course, though with the top down quite nice for short trips. The front seats had awesome comfort and sprawl-out space for this tall, lanky driver.

Retractable hardtops are all the rage, but they have plenty of disadvantages—namely weight and sacrificed trunk space. Somehow, the E550 manages to provide such an isolating experience with the top up that you might think at times you're in a hardtop. Of course you hear the rain a little more, but during a rainstorm, the multi-layered top was still remarkably quiet. Top-down, the E Cabrio is one of the least turbulent convertibles at supra-legal speeds, too. We counted just under 30 seconds to get the top either up or down, by the way, counting the small rear windows, which were the last in the elaborate sequence.

There are of course ways you could spend a little more money, and get something more of a sports car—like the 2011 Porsche 911 Cabriolet Carrera or Jaguar XK Convertible. But if you have the budget for a premium convertible and aim to tour, enjoy, and impress—but aren't the track-hound type—the 2011 E550 Cabriolet is in many ways, every bit worth its premium above the lux-convertible mainstream.