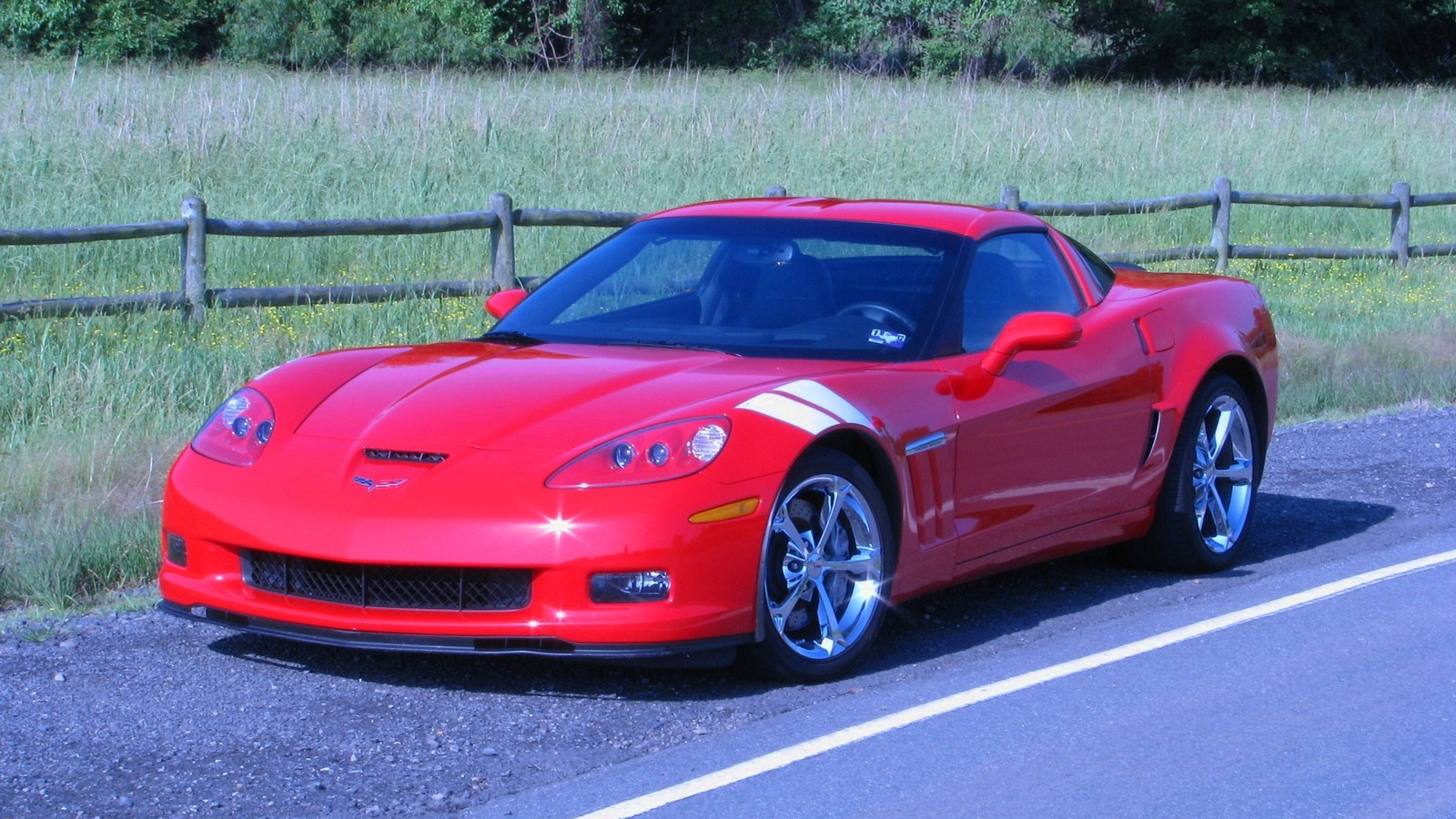 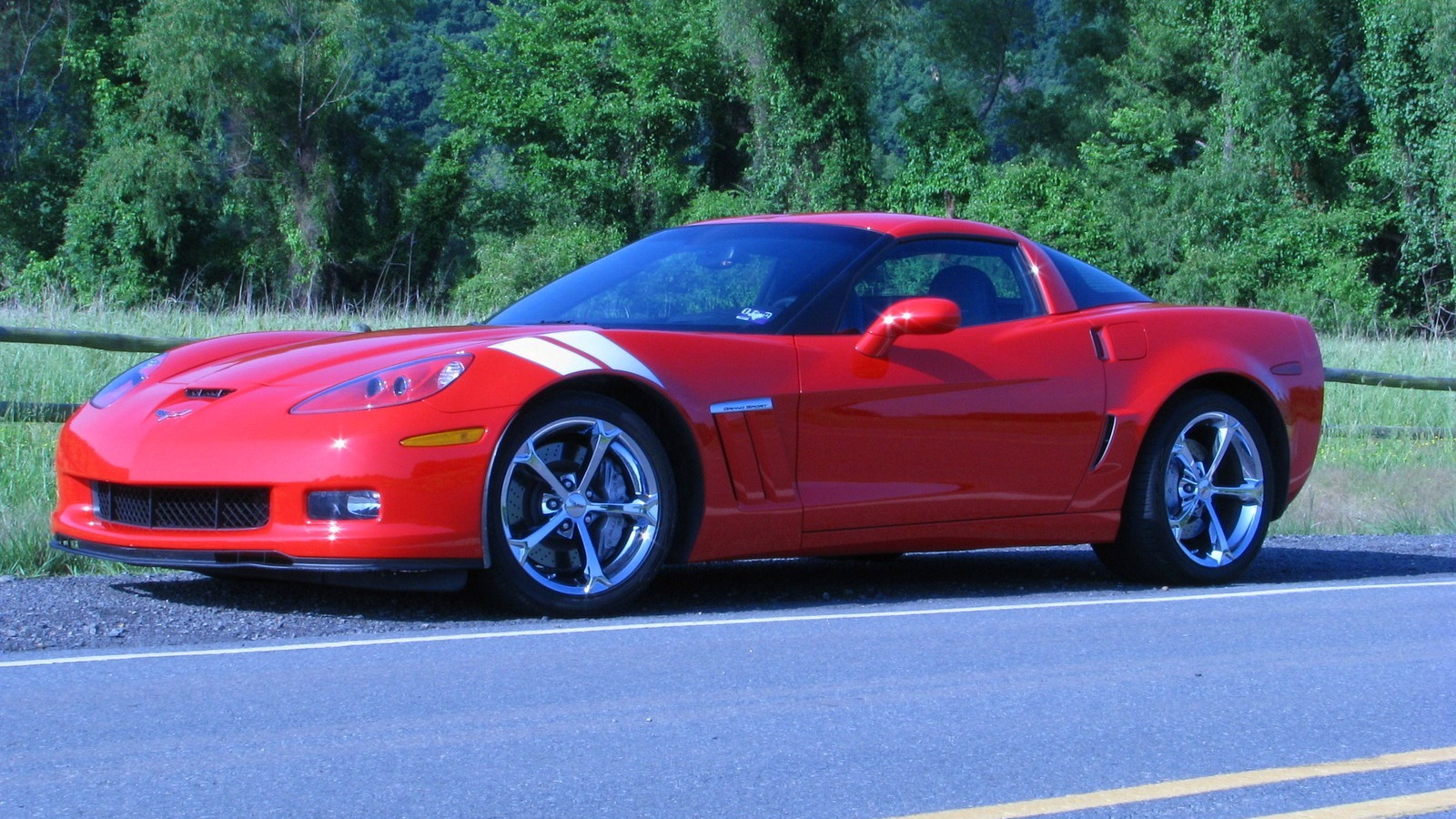 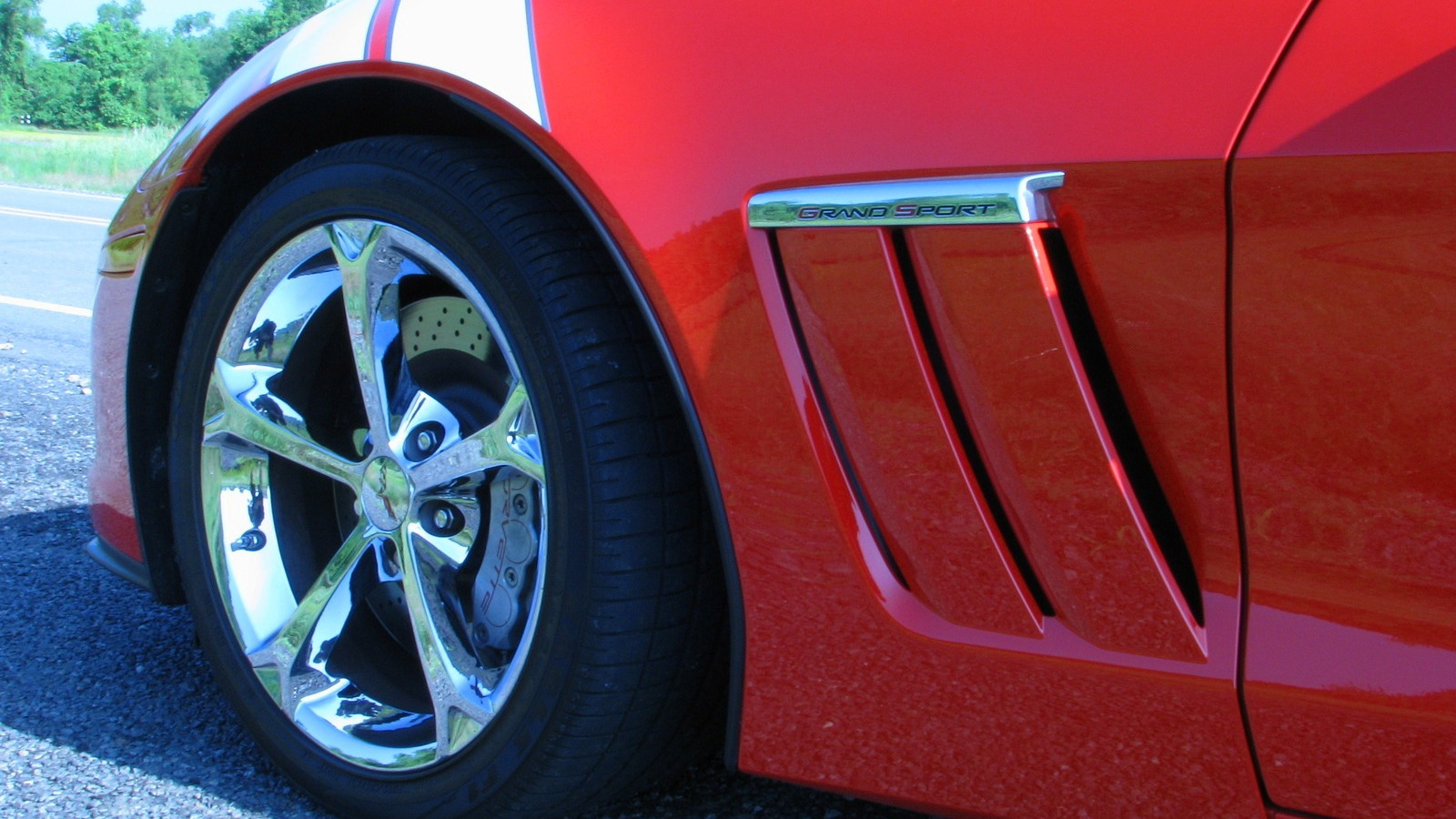 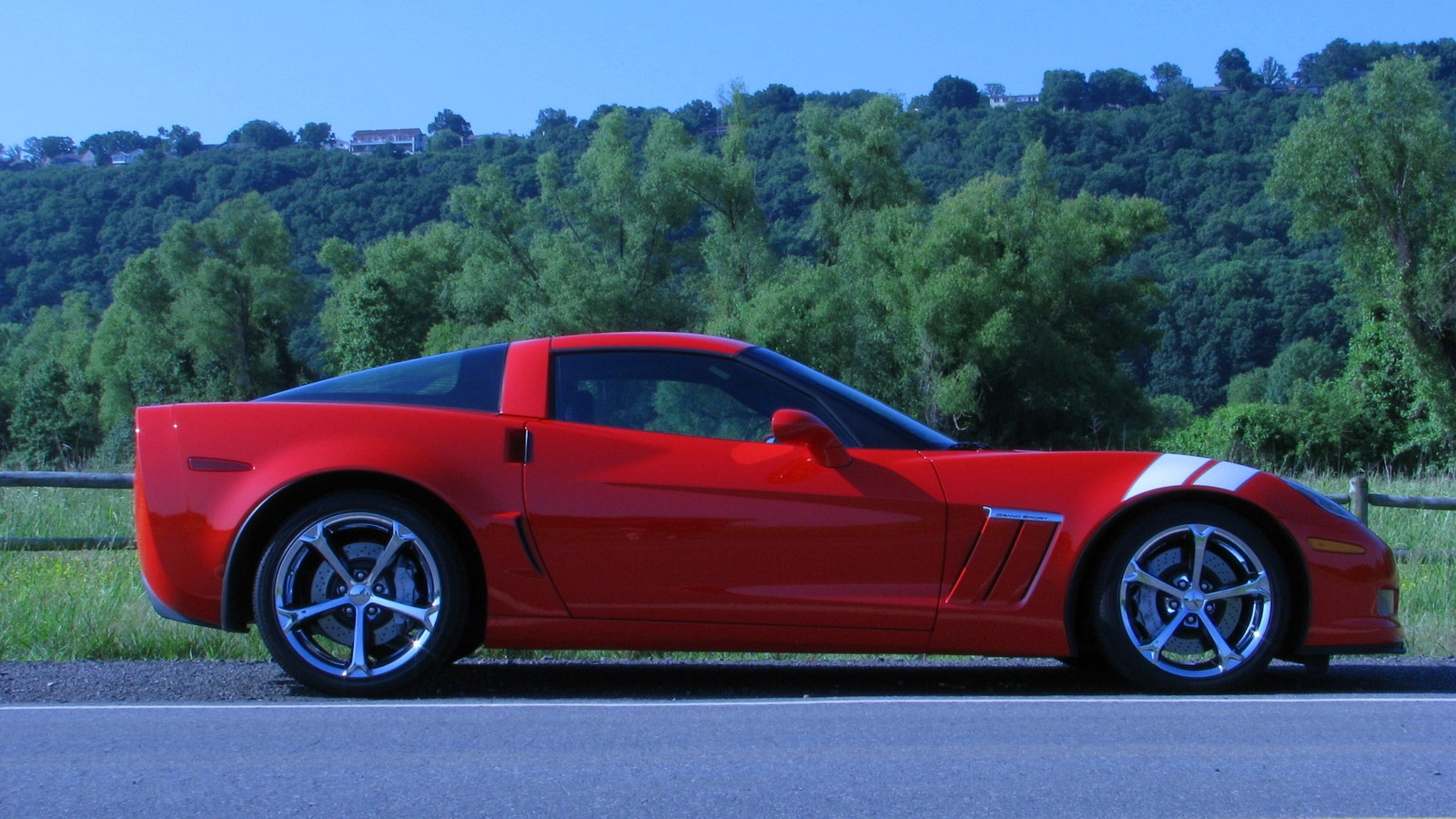 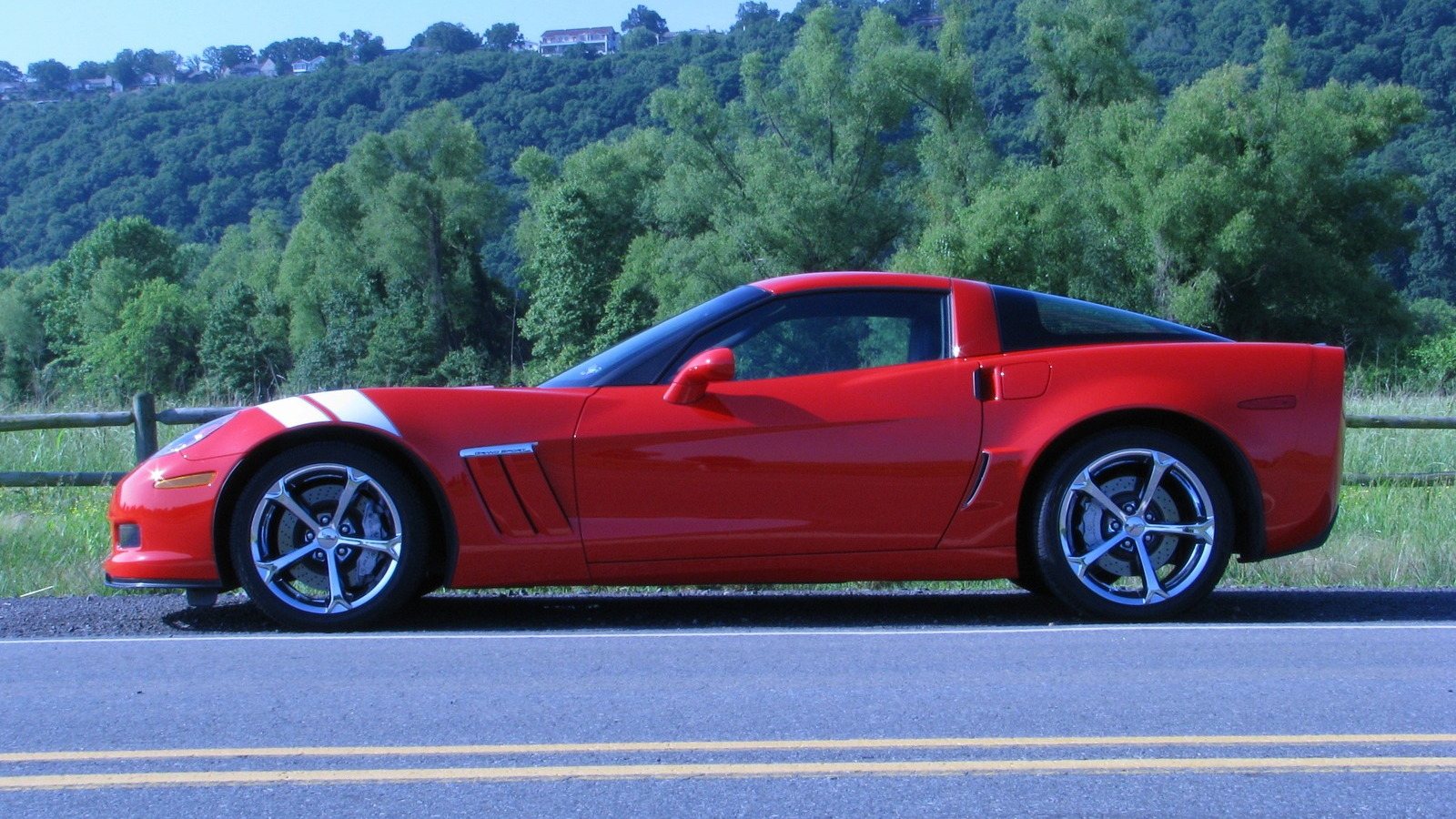 You've got a magnificent stretch of two-lane blacktop planned, a 2010 Corvette Grand Sport in the driveway and a weekend to burn. Sounds like the perfect recipe, right? It is until someone adds in a few hundred cruising motorcycles and one very slow yet determined 18-wheeler.

This frustrating scene was my reality with the 2010 Corvette Grand Sport just a few weekends ago. All set for a fun and frenetic drive up Arkansas' inimitably twisty and scenic Pig Trail on the way from Little Rock to Fayetteville, I found I'd picked the worst Saturday possible: the weekend of a motorcycle rally along the exact same path. But all was not lost, it turns out.

A Steel Z06 Or A Dressed Up Coupe?
The 2010 Corvette Grand Sport can be described as a standard Coupe with a lot of Z06 trimmings--the widened fenders and wheels, upgraded suspension, bigger brakes, a dry-sump engine on the manual version, and a host of other small tweaks that make it a better performer on the track. But it can also be described, almost as accurately, as a Z06 with a steel unibody and a smaller engine. However you think of it, ours was a max-spec manual-transmission 4LT version, equipped with the navigation and upgraded audio package, premium leather upholstery, chrome wheels, Grand Sport Heritage appearance package and fender stripe, dual-mode performance exhaust and a host of other accessories that drove the price up from its $54,770 base price to just north of $68,000. That's only a few thousand shy of the Z06's base price, but it makes for one comfy Coupe.

So you can understand the frustration of being stuck at a snails pace as packs of very relaxed-pace bikers proceeded to turn one of the best driving roads in the country into a parade route. And that was before the 18-wheeler slowed the pace to sub-20 mph for a dozen miles or so as he navigated the hairpin turns, using up every inch of the blacktop and then some.

The lethargic drive up the mountainous road gave me a chance to assess an aspect of the Grand Sport's nature that I'd probably never have slowed down enough to notice, or at least notice as thoroughly, otherwise: this is a comfortable, easy-to-drive car in typical stop-and-go traffic. Aside from the lack of a back seat and the archaic infotainment/navigation system, you'd be hard pressed to point to any major downside to being in the tarted up 'Vette instead of a BMW 3-Series or Mercedes C-Class. Noise levels are low with the engine loping along at 1,000-1,800 rpm, the interior materials are more than acceptable with the optional premium upgrade package, and the seats are perfect--supportive but not too soft, with plenty of adjustment for many sizes of driver or passenger.

But as much as the Corvette, even the more performance-focused Grand Sport, is capable as a daily driver, that's not really what the car is about. It's about raw, neck-straining, passenger-screaming, grin-inducing speed. And it delivers on that front, too.

Warp 10, Engage!
Eventually we cleared the bikers as we transitioned from the Pig Trail to an alternate route, and still in the mountains, I uncorked the car's ferocious 436-horsepower dry-sump 6.2-liter LS3 V-8. The two-mode exhaust opened up and a chorus of eight gasoline-fed demons sang through the hills. Winding, undulating "straights" led into tight, cambered corners, offering ample opportunity to test the mettle of the bigger brakes that come with the Grand Sport. Though they lack the initial bite you'd expect from a high-performance car--likely a concession to the gold-chain and chest-hair set--there was no noticeable fade after many dozens of hard braking zones--braking from the speed limit, of course. Brake pedal feel is a bit wooly for the most part, but with ABS to fall back on, you can simply mash it and hang on.

The upgraded suspension, with its stiffer springs, beefier anti-roll bars, and upgraded dampers proved more than a match for the occasional less-than-fresh patches of Arkansas tarmac, smoothing out the ride while still delivering supreme grip and minimizing body roll. Combined with the comfortable cockpit, willing engine and ample brakes, the Grand Sport feels like it could do this around the clock. And it makes you want to, too.

Too Much Car For The Street?
But there's a downside to all this capability. Pushing this car to 7/10ths on the open road is about 2/10ths too far--it has so much to give, you'll be well past the speed limit and the outer bounds of safety for even the most perfect conditions. Blind driveways, a lack of runoff room, other drivers, and the potential for governmental interference all conspire to keep the car somewhere around 50 percent of maximum--that is, if the driver isn't a homicidal maniac.

This downside isn't so much a downside as visceral proof that the car is made for the track. The only environment in which a driver can really feel out the limits of this car's potential is a closed one.

While this is true of many modern sports cars, it can feel fast driving them at a fraction of their potential--they exhibit small tendencies toward understeer or oversteer, get a bit awkward under quick transitions, or even make you wonder if they're going to stop in time in a panic situation. But the Grand Sport just lopes along, easily doing anything you ask of it, hardly imparting any sense of the pace because it's so completely planted and under control. Then you look down at the speedometer and realize you don't need a $300 ticket this week. Unfortunately, we didn't get to test ours on the track, where we might have explored and found weaknesses. Suffice to say: this is better than a standard Corvette, and even better than a Z51.

While we're of the opinion that there's no such thing as too much car for the street, for many there is a limit--and it typically comes at the pump. The 2010 Grand Sport, like just about any other Corvette, gets pretty solid mileage on the highway--24-28 mpgs is easy. But around town, or stuck in a motorcycle rally, that figure falls rapidly, to somewhere in the 14-16 mpg range. Considering the car is rated at 16/26 mpg city/highway, that's not a surprise, but it is a reality some may choose not to deal with in a daily driver.

Weekender Extraordinaire
Less-than-stellar around-town fuel economy is a small price to pay for such wicked performance, though, and whether you choose to drive it as your primary car or as a weekend toy, it'll reward you when Friday evening rolls around. Ample rear hatch space handles two people's worth of luggage with room for a few cases of wine to spare. Load it up, hit the hills for a relaxing drive to the weekend getaway, and enjoy the stares on the main drag once you're there.

If you're more inclined to play as hard as you work, the Grand Sport has you covered there, too. Load it on the trailer with a few spare sets of wheels and race tires, roll down to your nearest track, and you're ready to take on Porsche 911 owners fresh from the showroom floor. Of course, you could always drive it to the track on street tires and set a pace unachievable by anything in its price range, too--with the possible exception of the 2011 Shelby Mustang GT500, though that car is more about power and less about handling despite the major improvements for 2011.

The Verdict
Whether you're looking for a grand tourer with flair or a track-day toy with daily potential, the Grand Sport is a solid choice, though you'll have to watch out for options prices driving the MSRP up into Z06 territory.