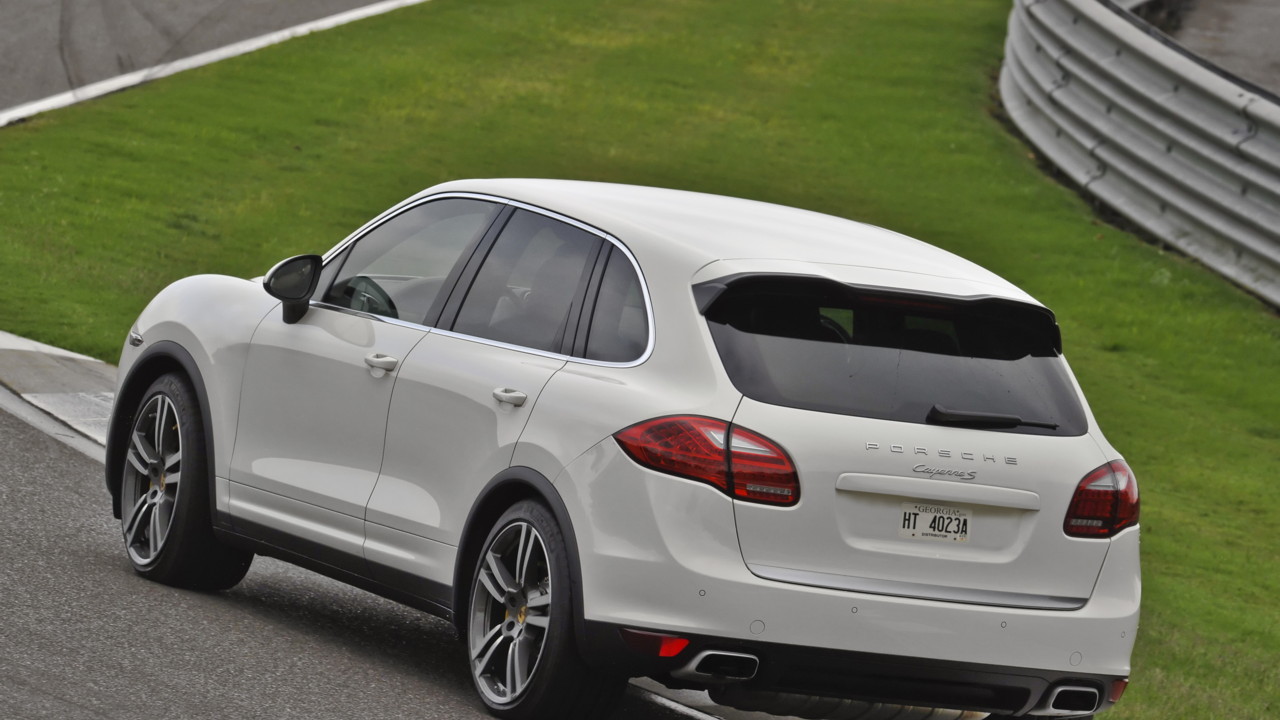 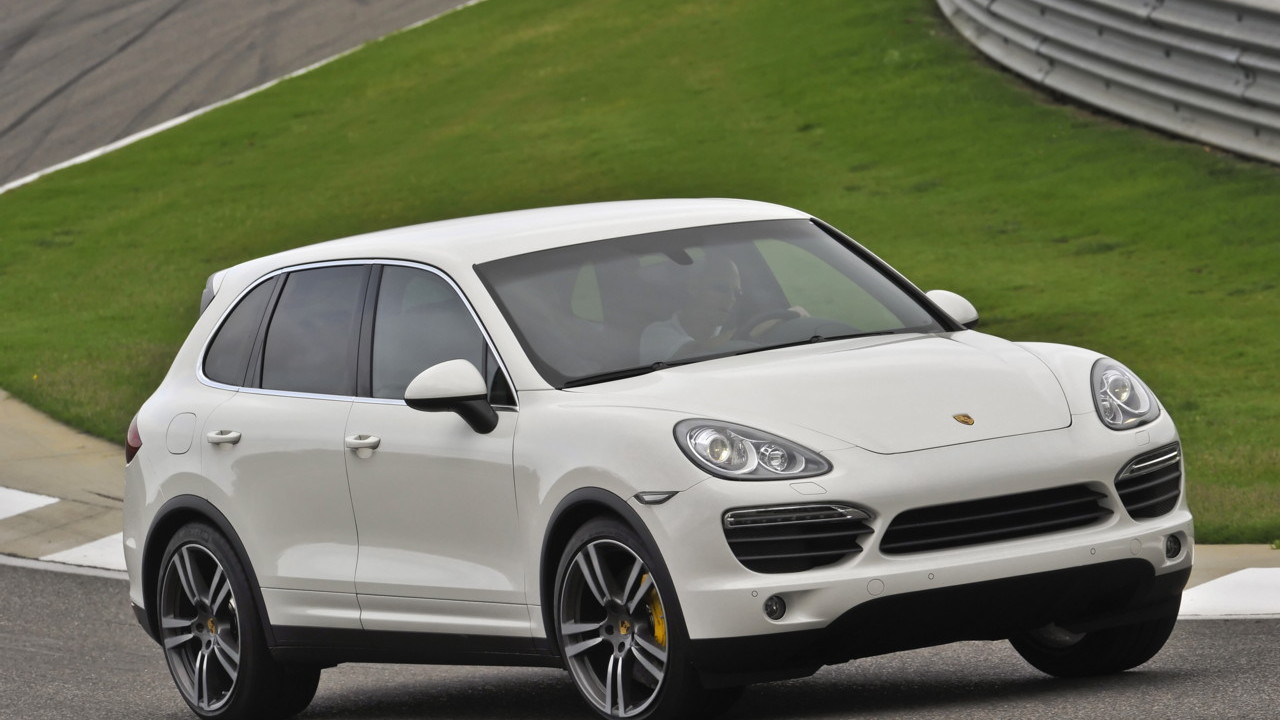 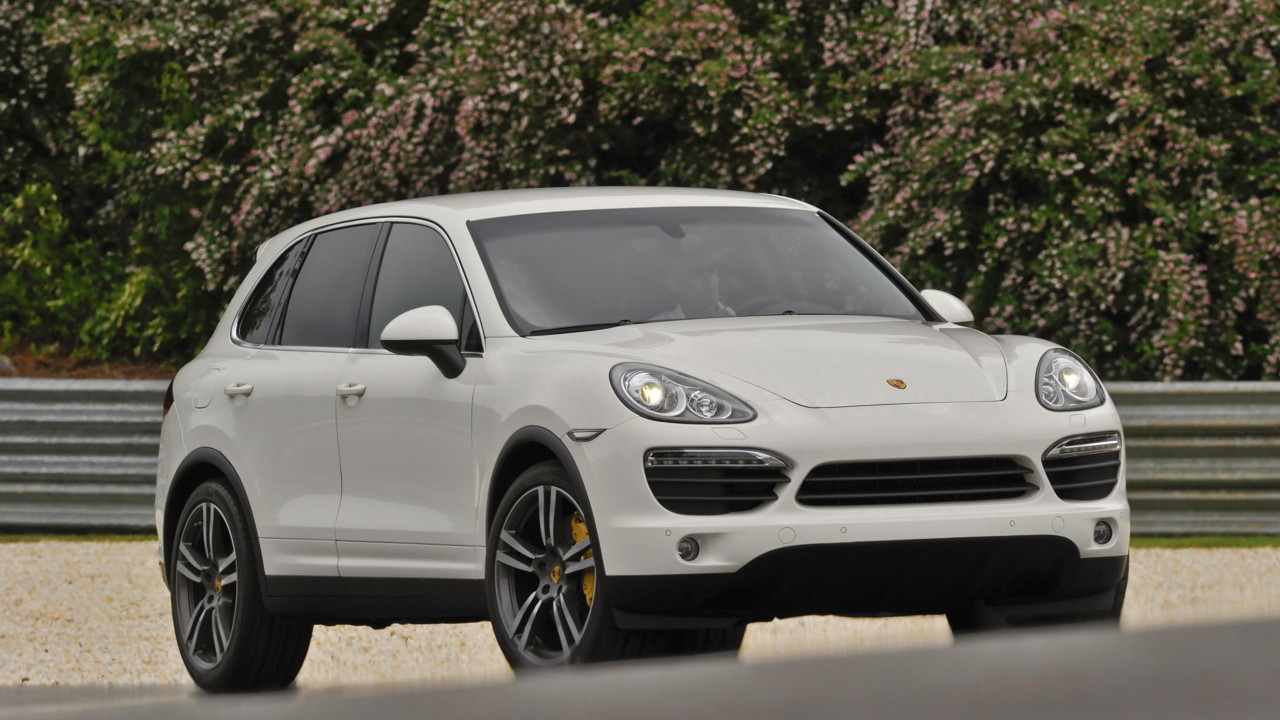 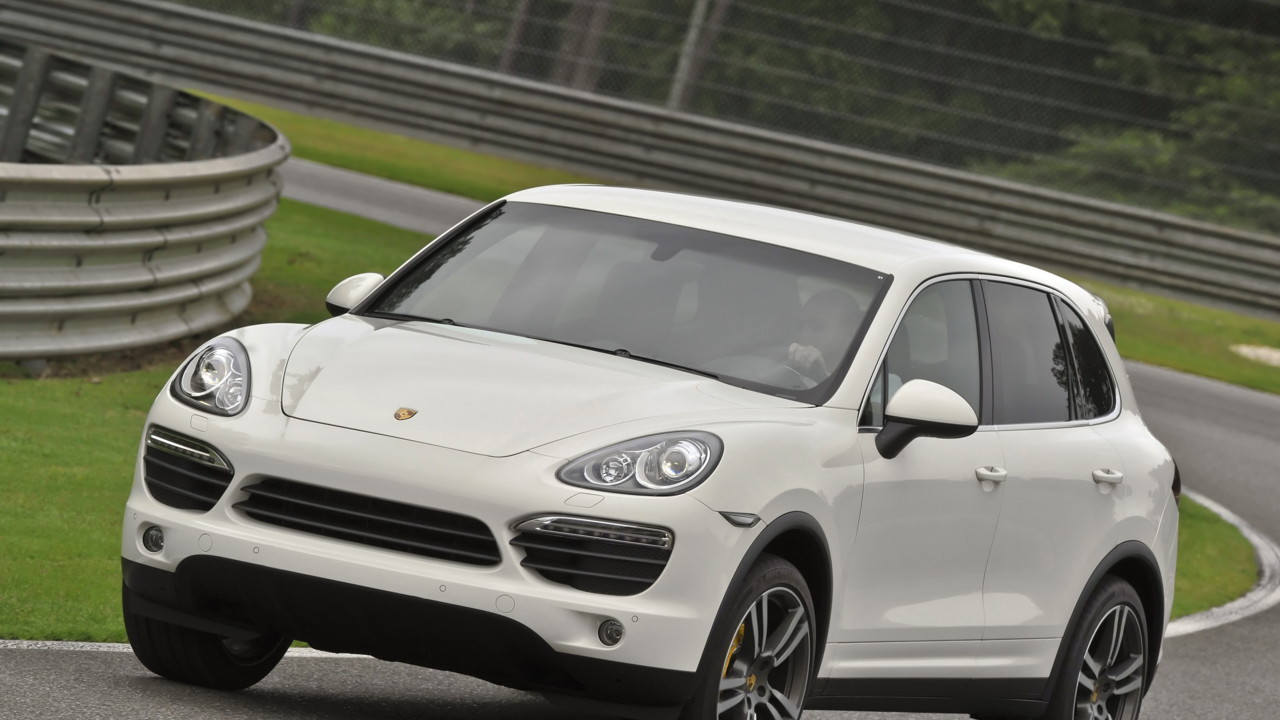 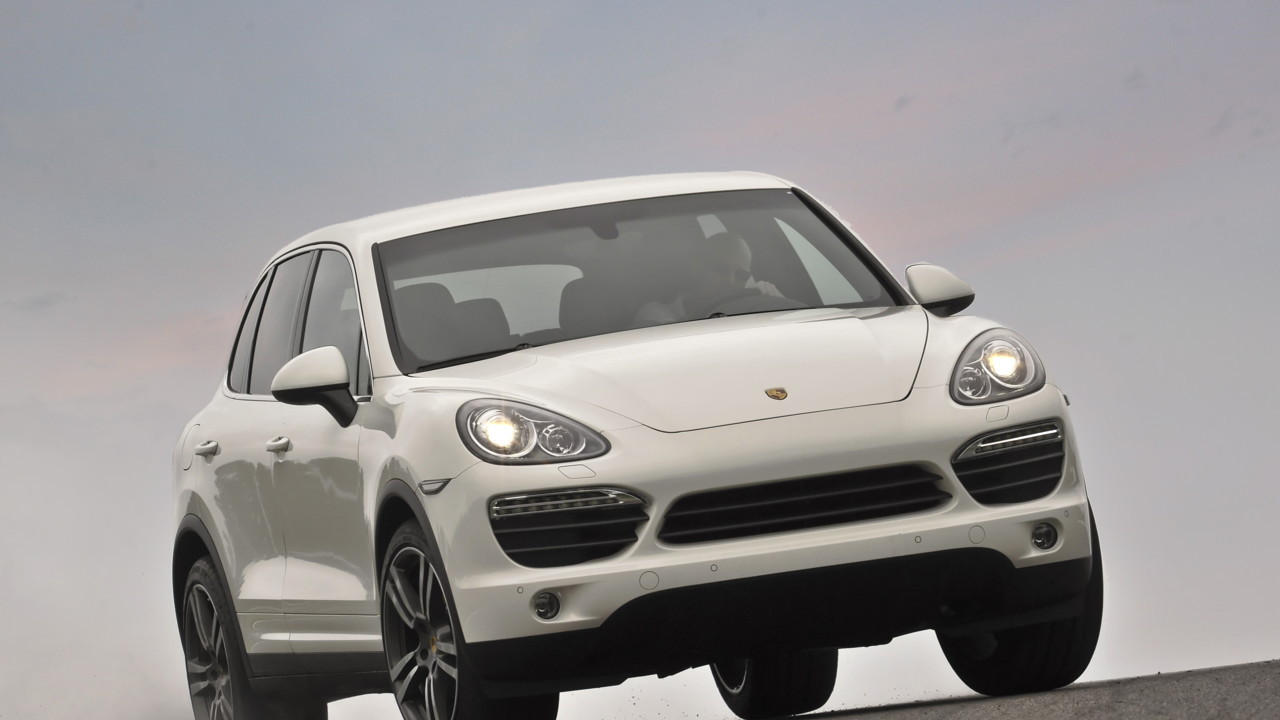 35
photos
As we piloted the new 2011 Porsche Cayenne S back to back with the 2010 Cayenne S, at Barber Motorsports Park near Birmingham, Alabama—a course that includes a good mix of tight hairpins, flowing sweepers, and terrain changes—it was almost instantly apparent that Porsche has done a lot more than a nip and a tuck. The new version of this utility vehicle is more nimble and sporty-feeling than before and minds its weight in a more confidence-inspiring way.

Part of the reason behind this surefootedness and poise is that there's significantly less weight to be shifted around, and a number of performance improvements make the Cayenne more focused toward on-road dynamics without sacrificing its off-road capability.

All the Cayenne's new-for-2011 features would have weighed an extra 154 pounds had the existing version been carried over, the automaker says. But here's where the story gets particularly interesting. Altogether, the 2011 Cayenne S weighs about 400 pounds less than the 2010—through no single strategy, but a combination of going with an active, electronically controlled all-wheel drive system and forgoing a low range; using more aluminum, substituting lighter interior components; swapping wheels and tires; and installing an electric parking brake, among many changes. The base Cayenne V6 model, which will reach dealerships later in the year, will now weigh in at a more size-appropriate 4,400 pounds.

Even the new 2011 Cayenne S Hybrid, which we also drove on the track, weighs in at slightly less than the 2010 Porsche Cayenne S; and that's considering its full-hybrid powertrain, including 47-hp electric motor system and 333-hp supercharged V-6 engine. The Hybrid will reach dealerships in October, a few months after the V-8 models.

From the outside, the changes are subtle even though it's officially all-new sheet metal. The Cayenne's side pillars have been blacked out, giving it a lower-set look, even if its overall dimensions are about the same, and the front end can readily be distinguished from its new air-dam design. Door panels are also more curvaceous, and if you look more closely the new version has rear flanks that are slightly more accented.

While the Cayenne might not look that much different from the outside, it's changed significantly inside. One of the single most noticeable differences is the completely new instrument panel. Gone is the cheap black plasticky sea of buttons and more upright look of the current (outgoing) Cayenne; the new setup is curved, with a high, upward-sloping center console like that in the Panamera (and Carrera GT), with a new touch-screen system at the front. Grab handles still flank the center console, while the curvy instrument panel has prominent vertically oriented vents and contoured and accented just right with matte-metallic brightwork. Altogether it looks like a more sophisticated setup and is considerably more coupelike in feel than the former layout.

In back, the Cayenne's rear bench seat now slides fore and aft a total of 6.3 inches, and legroom has increased thanks to a 1.6-inch longer wheelbase. Back seat rake is also adjustable, with three different positions. The seatback still doesn't fold completely flat, though it will provide space for a snowboard or a small piece of furniture.

Porsche has also upped the level of tech content in the Cayenne. A good Bluetooth interface is at last standard across the line, while the standard sound system includes an iPod and USB interface. New options include a Lane Change Assistant that helps alert the driver to vehicles in blind spots, a bi-xenon adaptive cornering lighting system, and an Adaptive Cruise Control system that can maintain following distances at speeds between 20 and 100 mph, will prime the braking system when needed and will even stop; a quick press of the accelerator will reactivate the system. As with the outgoing Cayenne, you can easily blow ten or twenty grand on options. One of the Cayenne Turbos we drove was loaded with those new features plus the panoramic roof, a heated windshield, the high-end Burmester surround-sound system, and RS Spyder Design wheels, among others, bringing the total to almost $125k.

Both V-8s have much-improved fuel-efficiency, with the Turbo 23 percent more fuel-efficient than the outgoing model. That's in part thanks to an all-new eight-speed Tiptronic S transmission—offered on all 2011 Cayenne models—that spans a very wide set of ratios. Better thermal management, a smart alternator system, a variable deceleration fuel cut-off, and the weight savings all also play a role.

So does Auto Start-Stop, a feature that will automatically turn the engine off at a stoplight and restart it when you lift off the brake. While the Euro-spec versions that we drove default to turning the system on, U.S.-spec Cayennes will likely default to turning start-stop off.

Of the two V-8s, both are sweet and responsive, but we most enjoyed the Turbo, which has the most personality of any in the lineup, with a raucous, pulsing exhaust note and mammoth, instantly accessible torque available from low revs, lending a relaxed, almost effortless feel to on-the-road driving. In the Turbo, a stomp down at 70 mph commanded a downshift from 8th to 3rd gear and a mad rush to, in just a few seconds, triple-digit mph.

All that extra power could get you into trouble as well, but a set of electronics makes sure it's all in check. Porsche's stability control system (PSM) now includes a Porsche Torque Vectoring (PTVF Plus) feature that helps redirect power application to the wheels that will result in best stability, either during high-performance driving or in slippery conditions. These features work together with the PASM air suspension system when so equipped; we found them to give the Cayenne a surprising level of composure over a sudden crest in the Barber course, the wheels only momentarily jockeying for the best traction. The Cayenne has a level of poise that outshines the BMW X5 M or Infiniti FX50 at fast track speeds.

The S and Turbo, compared to the Hybrid, have a firmer steering feel, and the wheel returns to center more intuitively out of tight corners. Although in any of the models, the steering itself still feels very muted and isolated, with surprisingly little road feel compared to Porsche’s sports cars. On either of the V-8 models, brakes are of course phenomenal, feeling barely taxed after a long stint of track time.

Although few Cayenne owners will likely ever take their luxury ute off-road, Porsche still feels the need to offer trail ability in its ute. That considered, it's amazing that the 2011 Cayenne can trundle through sand and mud one hour, then after a quick cleanup—no change of tires even—head right out for hot laps. No other SUV can do that with the same athleticism, finesse, and flavor as the Cayenne.