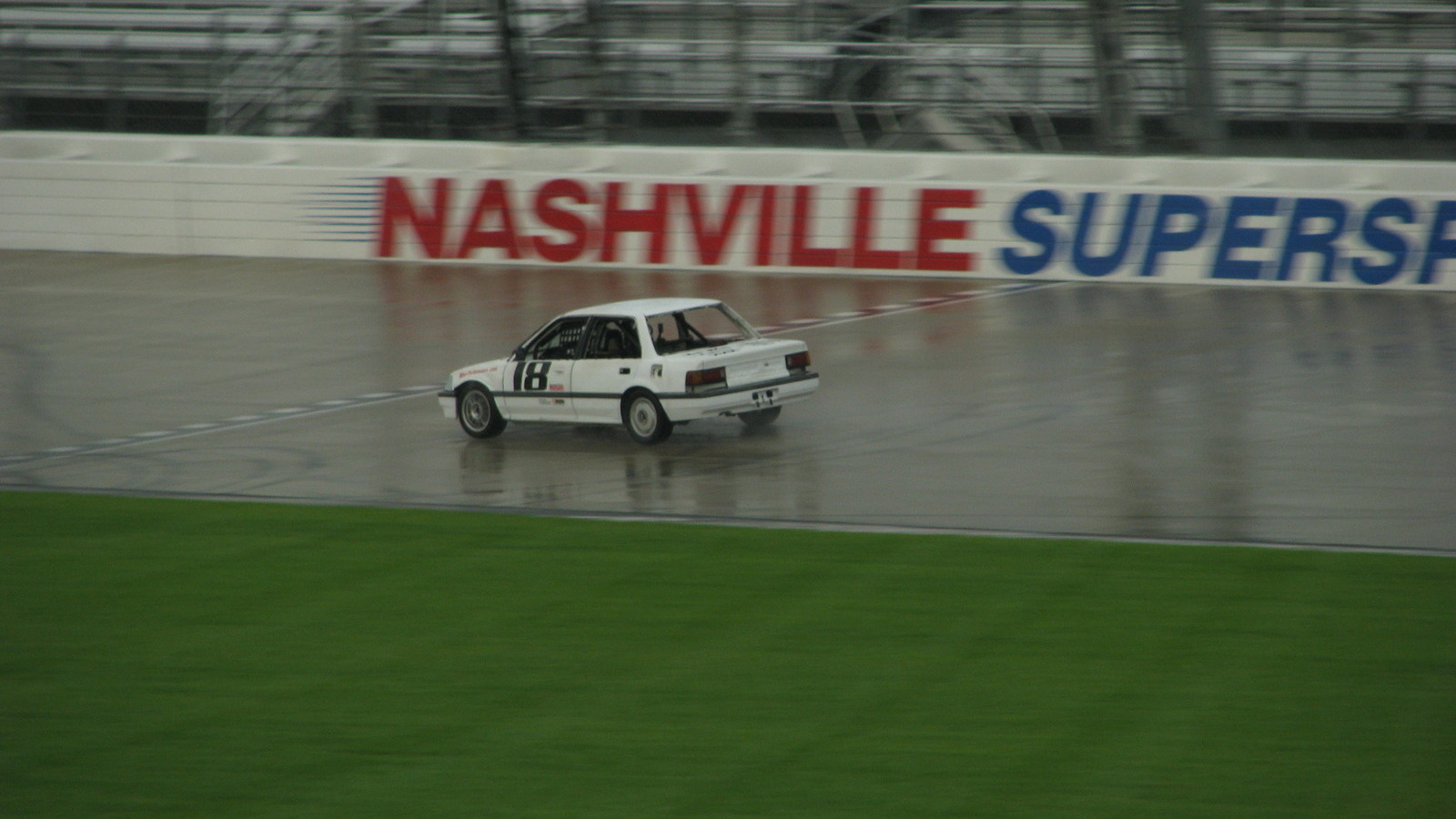 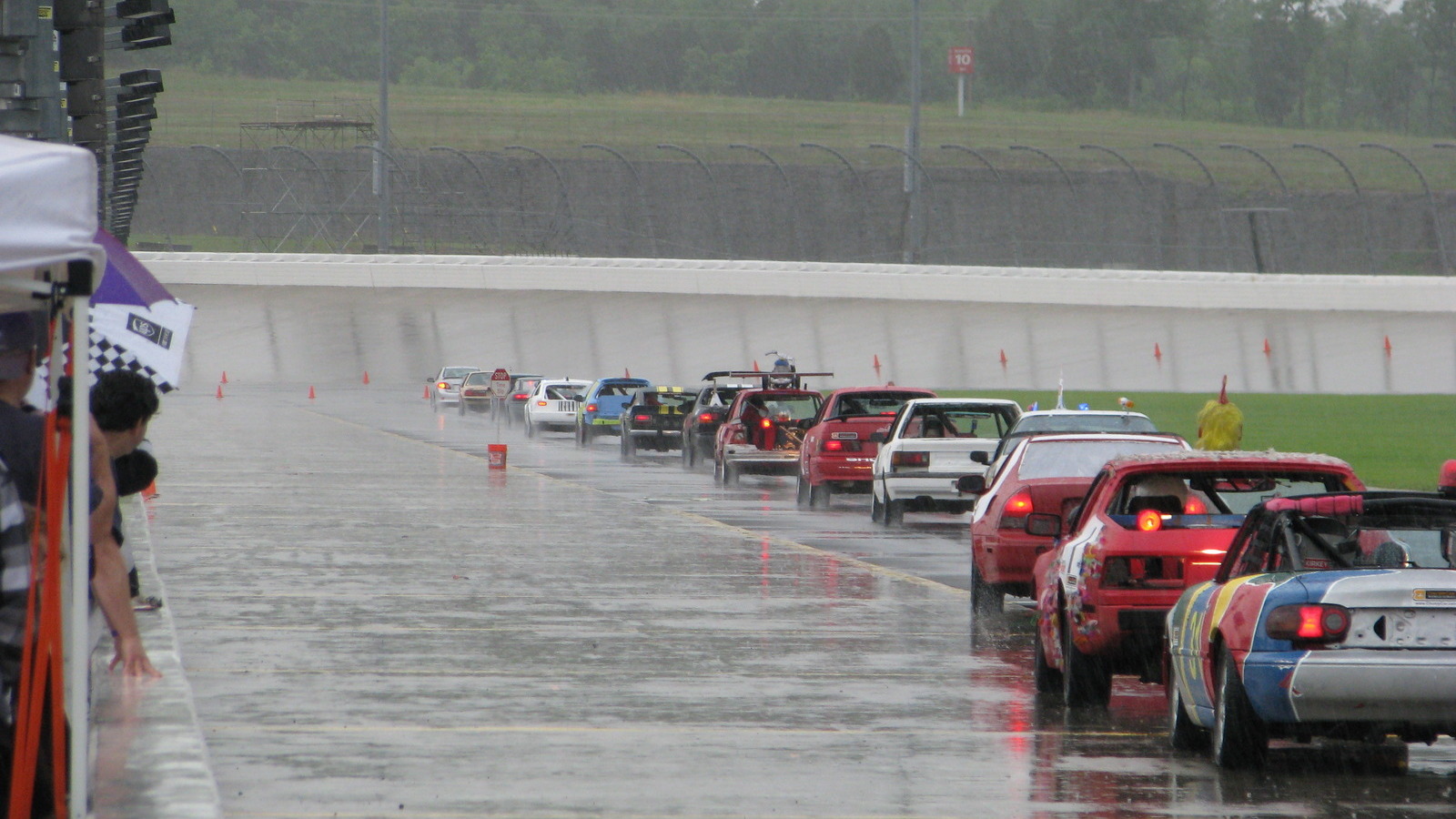 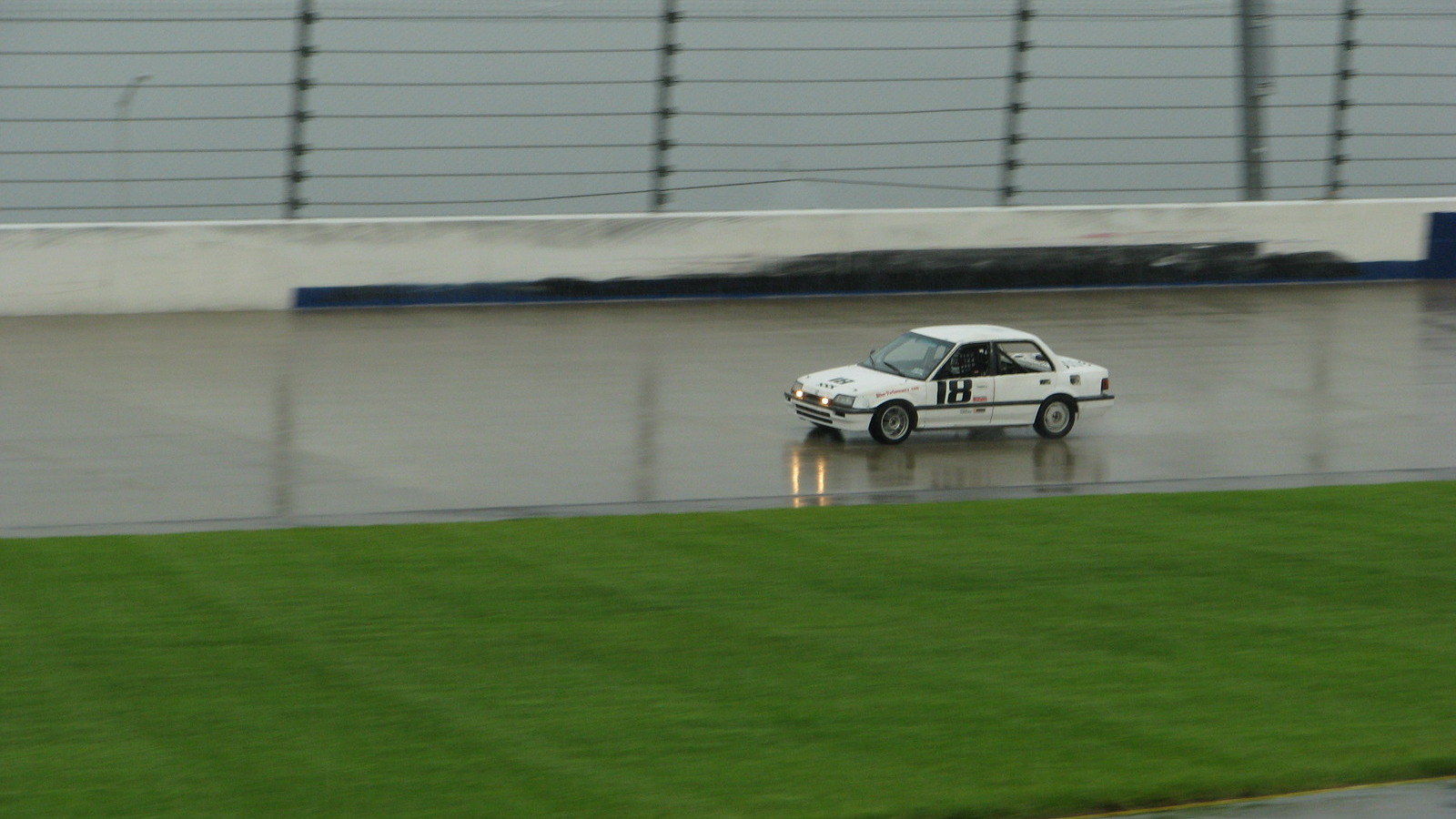 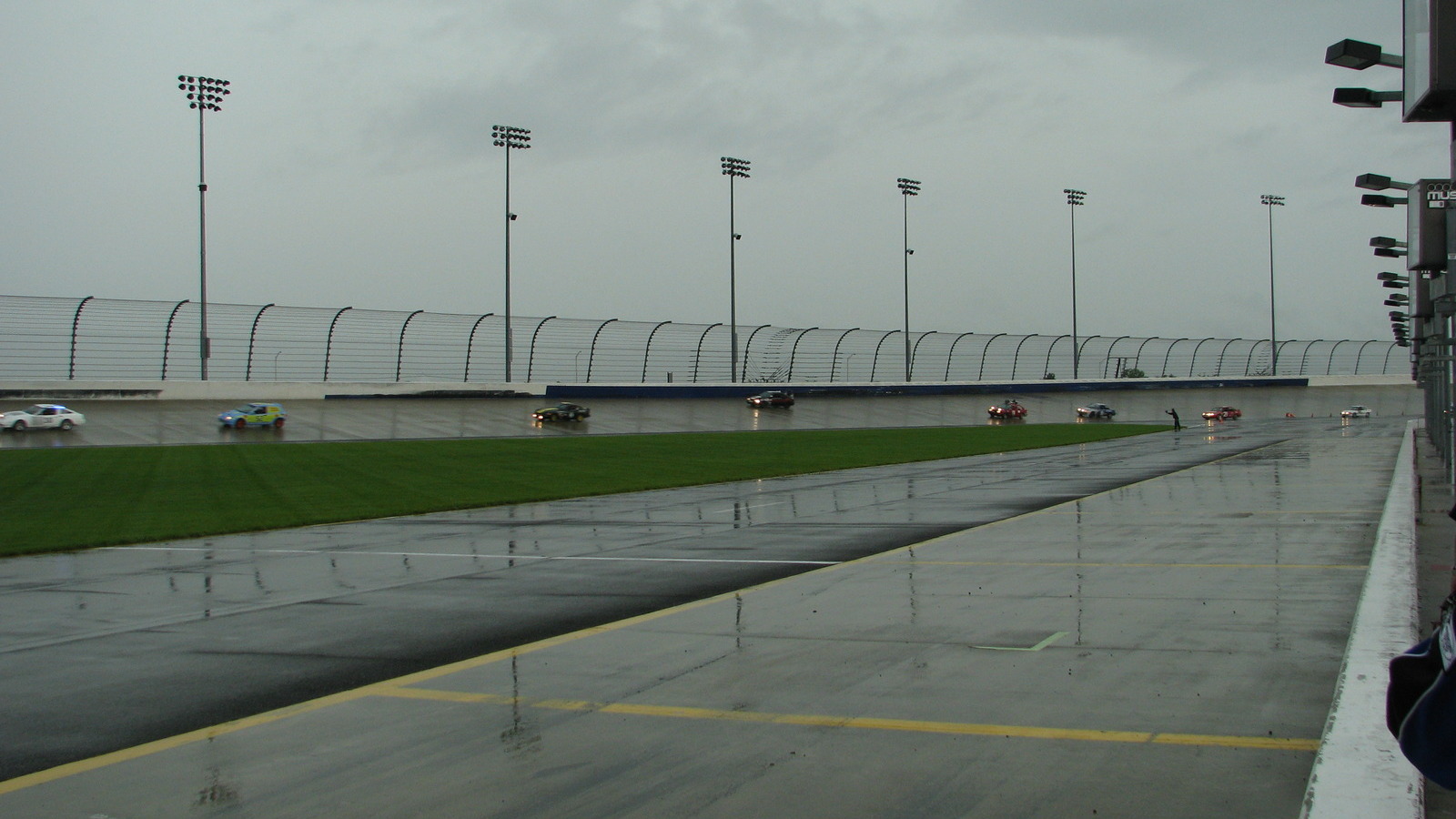 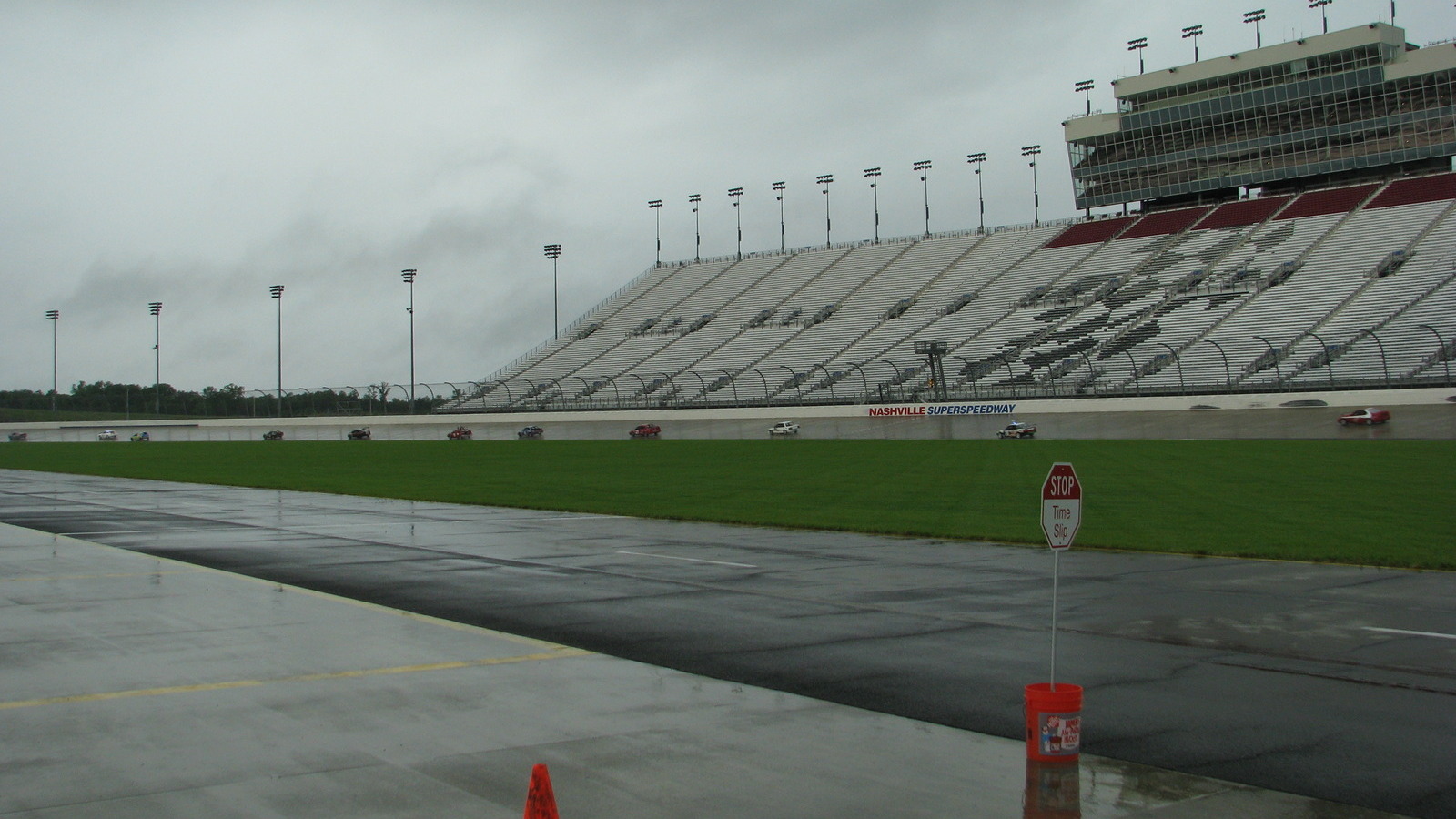 I'd just scarfed down a hot-off-the-grill bratwurst when the car came zooming into the pits from its second stint on the rain-drenched Nasvhille Superspeedway a few minutes earlier than expected. Turns out the driver was rapidly becoming a Klingon due to a too-tight helmet. I was so eager to hop in the car I forgot I was wearing a plastic poncho and it had to be torn off--helmets don't fit through ponchos--as I slid into the car. Adrenaline pumping, strapped in tight under a five-point harness, I headed out of the garage and through the pits. Thus began my stint at the Nashville 9.

First things first, though. The Chumpcar World Series is, as many of you know, a $500 "crap-can" racing series, but despite the low-budget intentions, it's real racing, and real fun. And it's something any group of people with some mechanical know-how and a burning desire to run an open track against like-minded lunatics can do.

Upon arriving at the event, we presented our gear and car for inspection, our novice school requirements waived as we all hold licenses from other racing series. The car sailed through with flying colors, Chumpcar tech inspector and 30-year oval-tracker (and therefore eminent cheat-detector) Lloyd Boggs awarding White Lightning two bonus laps for being a "true $500 car," said with a grin that spoke of a combination of respect and pity.

Roaming the garage, meat grilling and the pre-race party well underway despite the looming forecast, the cars in their glorious state of functional disrepair, it became clear to this first-timer that Chumpcar, like its 24 Hours of LeMons counterpart, is nearly as much about the trackside festivities as it is about the racing--though the racing is definitely worth the trip on its own.

The track layout for the 2010 Chumpcar Nashville 9

The course for the Nashville 9 featured a long stretch on the oval, nine turns including a run through the infield and a 1.8-mile lap length. What doesn't show up on a track map, however, is the 6.8 inches of rain that fell during the five hours of green-flag driving or the rivers of water running across sections of the track.

The first stints saw several spin-outs, though car-to-car contact was minimal. The drivers on the track, few as they were, kept a tight leash on things, driving magnificently considering the treacherous conditions. The #84 Mustang of Team FusterCluck was off to a blazing start before demonstrating some of the more artful end-swapping of the entire race, then slowing the pace a bit to match the conditions. Team White Lightning's #18 Honda Civic also saw its share of loops and moments in the rain, but kept a steady and quick pace to stay within sight of the leaders.

Our first two stints were quick, steady and wonderfully incident-free, as drivers Gideon Mecum and Brian Rogers drove through the sheeting rain and limited visibility with strategically quick-but-conservative laps. As the saying goes, to finish first, you must first finish, and in endurance racing, that means leaving a little in reserve to keep from breaking the car--while still staying on pace.

By the time I got behind the wheel, belly full of bratwurst, we were already solidly in the front third of the pack. So when, overconfident on my third lap, I came out of turn nine at about 75 mph and hit the impromptu river flowing down off the banking of the oval and felt the rear end suddenly accelerate past the nose, I was afraid I'd ruined the day. Clutch in, braking hard despite the slick surface and lack of ABS, counter-steering to slow the spins, the car looped two more times, the wall at the outside of the oval looming ever closer alternately through the windshield and rear-view mirror. I was sure I was the jerk that would put an early end to our race--or at least kick off a marathon wrenching session. But I got the car stopped, spun it back in the direction of traffic and only lost a handful of seconds--and gained a few gray hairs.

Back at it, but now wary of the tricky spots, I hammered through another hour and a half of four-wheel drifts and momentary slides, passing lap traffic and eventually making a lap back on the then-leading Acura Integra (#28, Team Non-Sequitur) and a pass for position on the #21 Egg Boy Racing Taurus SHO, to bring White Lightning up to fourth overall, a total of four laps down. All three drivers' times were consistently in the 1:30.x range, meaning a 72-mph average lap speed--even as the water rose to flood half the state of Tennessee. And we were only running the car up to 5,000 rpm to help keep it together for the full race distance.

From Mercedes-Benz to Acura to Ford to Datsun, the cars of the Chumpcar Nashville 9 were a hodge-podge of beater brilliance, worthy of their intended task despite appearances. Only one major mechanical malfunction occurred, as the #47 Moneyshot Racing Honda Prelude threw a rod through the block of its H22 after hydro-locking with a big gulp of water sucked up through the low-mounted cold-air intake.

Eventually my stint ended as the race was red-flagged due to threat of tornadoes, and everyone was called into the track's media building, a solidly-built place to wait out the storm. After about an hour of epic downpour and high winds, the race organizers decided to call off the remainder of the event--a tough decision, but a necessary one made to protect drivers and course workers. As we packed up the car and loaded it on the truck, we were torn between the elation of having run so well in the race and the frustration of two of our drivers not getting on the track at all.

Flooding in middle Tennesse, May 2010

Flooding in middle Tennesse, May 2010

To put it in perspective: half the state of Tennessee is now under emergency conditions, having received 14.5 inches of rain in 24 hours--the second most ever recorded in the written history of the state. It took us over five hours just to get out of the Nashville area, and we saw devastating flooding for another 200 miles along I-40 as we headed west toward home, including several detours off the interstate which was itself impassably flooded in some areas.

To help offset the impact of the weather on the race, John Condren and Chumpcar stepped up to the plate, offering a transferable free entry to any other Chumpcar race, as well as securing a new date--on incredibly short notice, and thanks to the generosity of Tracks Unlimited and Team FusterCluck--to re-run the remainder of the race at Nashville on May 16. Some teams may not be able to return due to budget or schedule constraints, and new teams may yet enter the race, but it's a testament to the effort the Chumpcar World Series puts into making its racing rewarding and fair for all who enter.

We'll be back on track soon, if not at Nashville, then at Texas Motor Speedway next month and again at Hallett in August, so stay tuned for more grassroots racing coverage right here at Motor Authority.