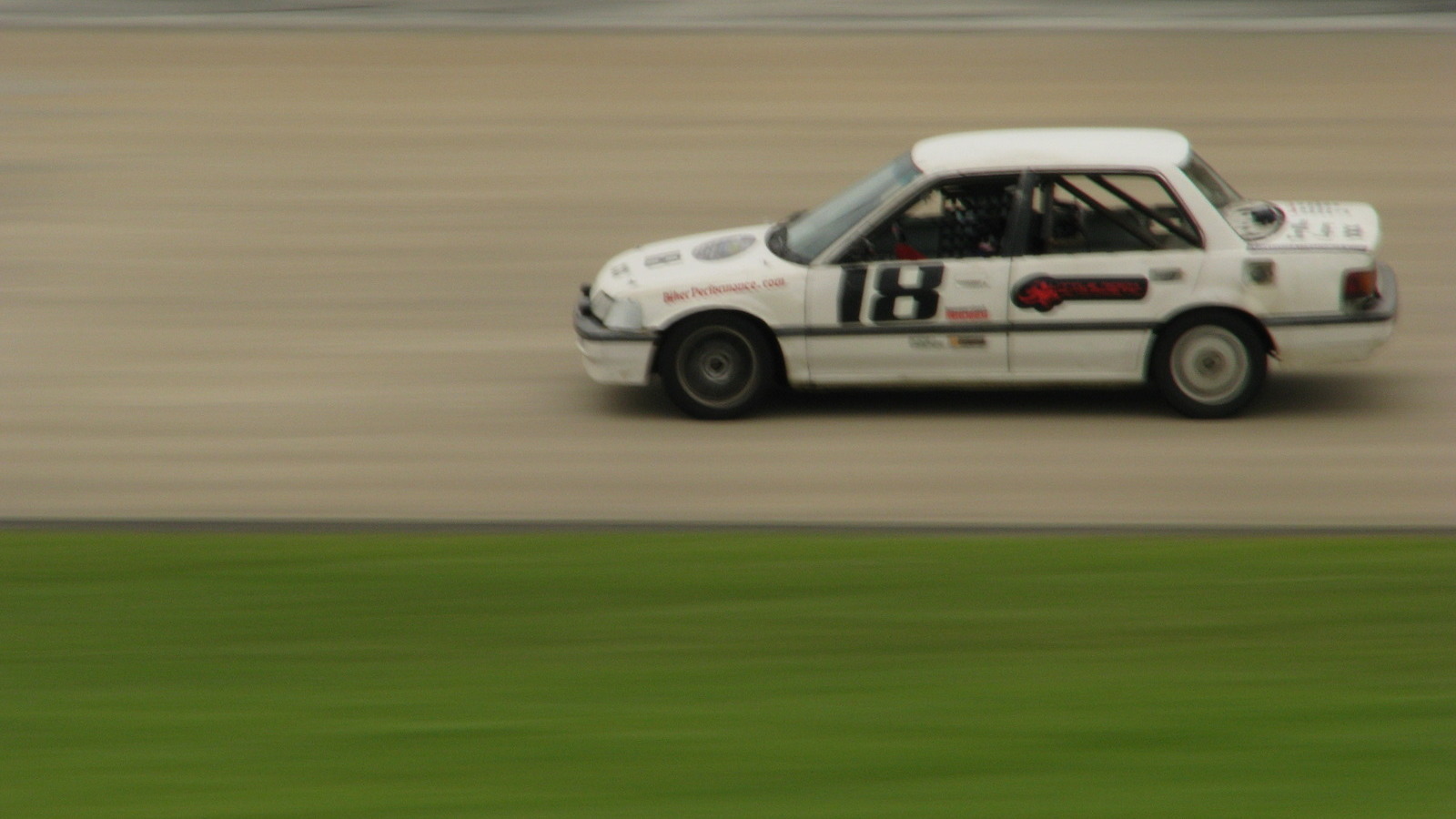 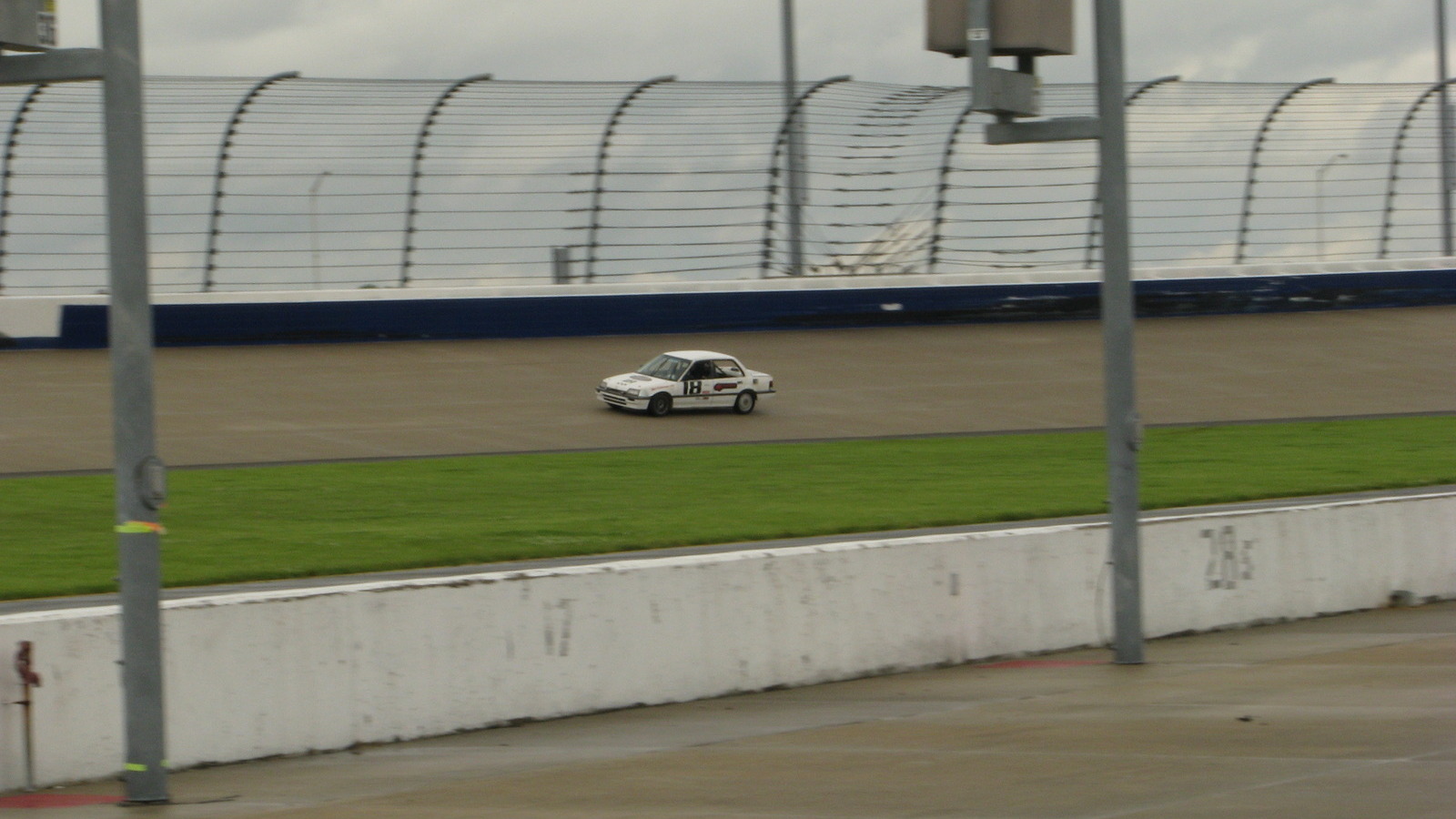 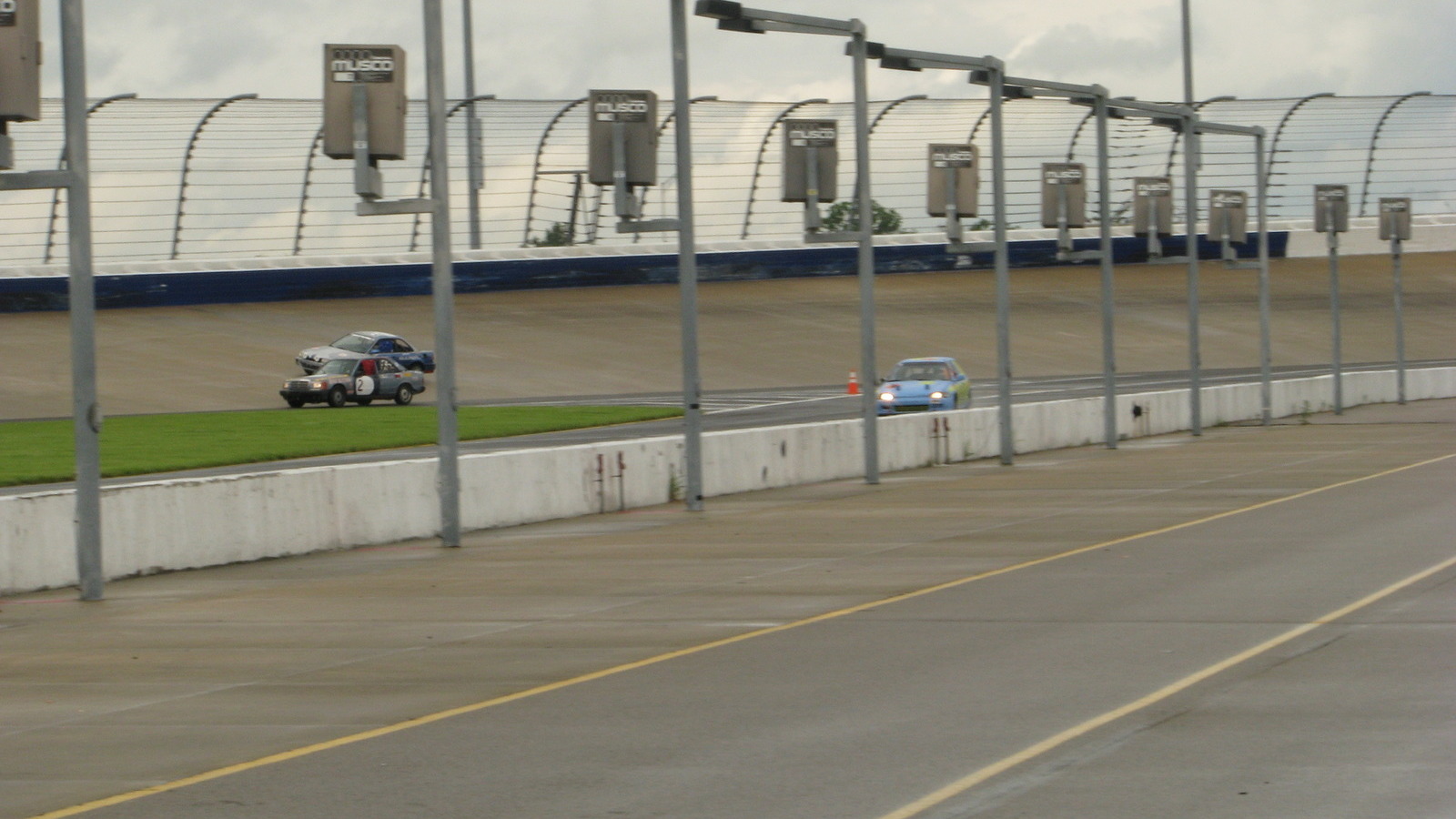 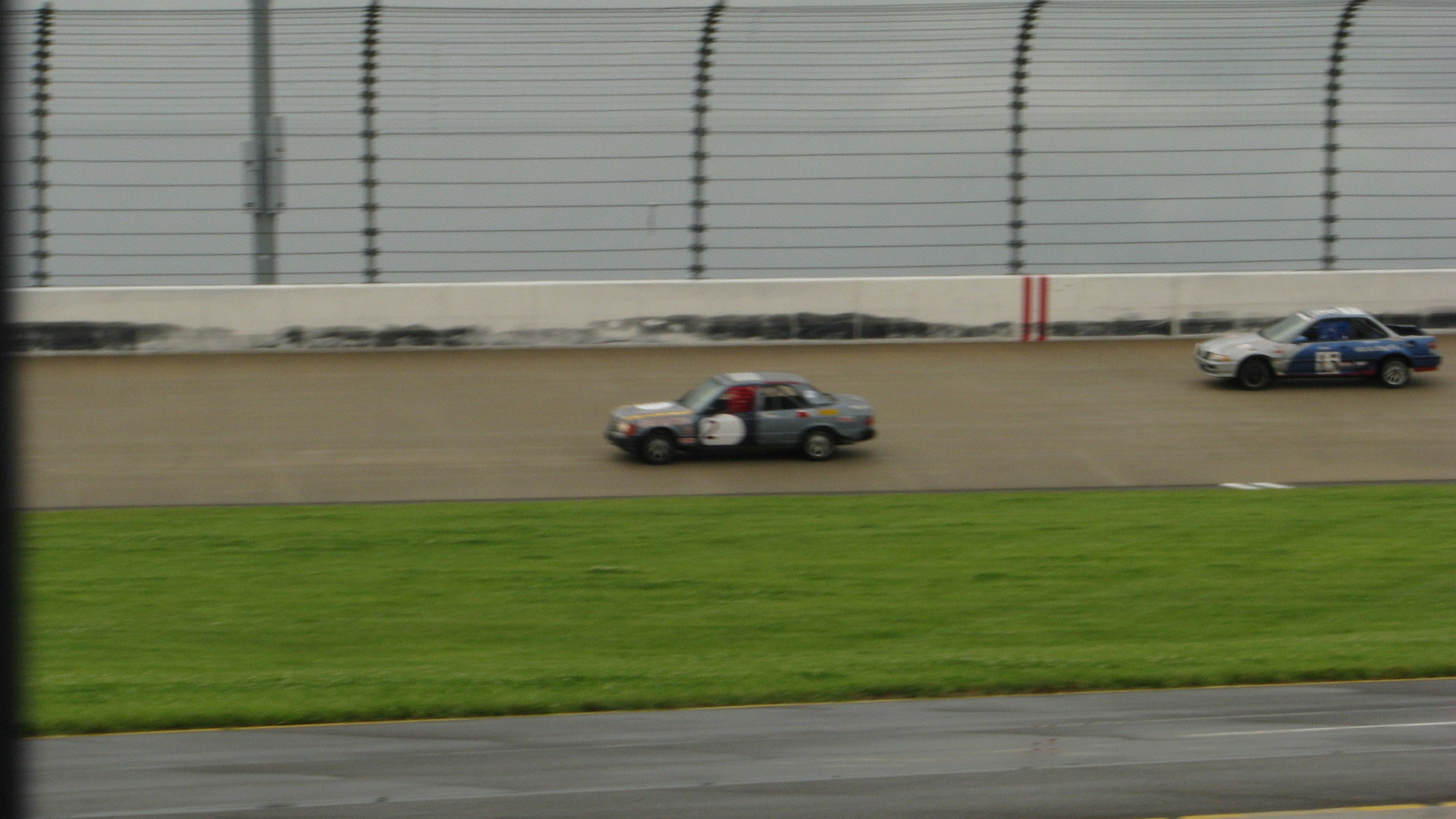 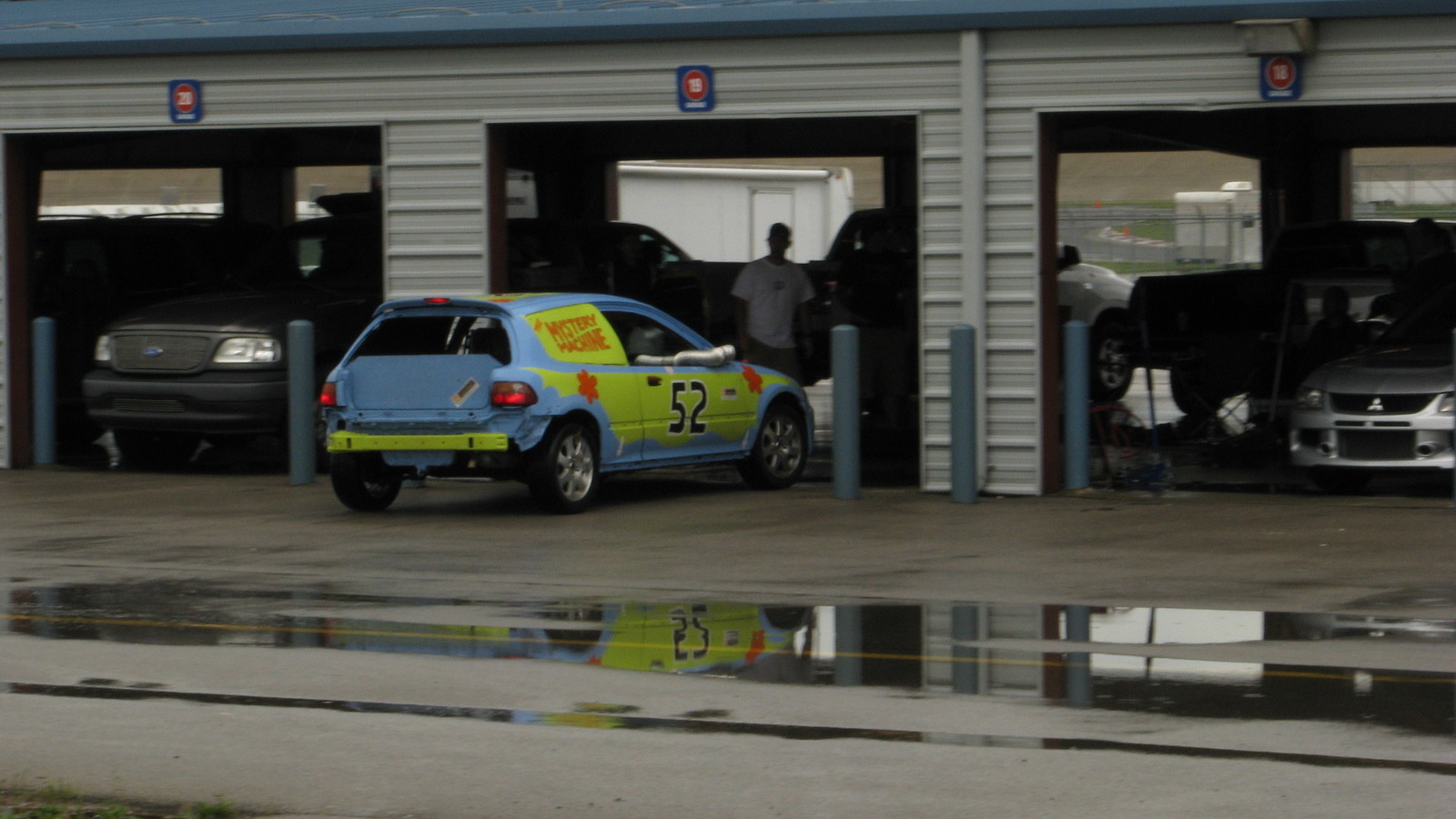 31
photos
An hour before the checkered flag, we had the lead by four laps. Our final driver was in the car, fueled and back on course, running what would prove to be some of the fastest laps of the day for our team. The sun had come out, the track was dry--all we had to do was hang on to our lead. But a screamingly quick stint from the Blitzen Benz saw us losing 4-5 seconds per lap, and the calculations all said we'd be passed for the lead within minutes of the 9-hour mark. The anticipation in the pits was palpable. When the cars came around for the final time and the checkers flew, it was the Blitzen team in the lead, our White Lightning Honda in second place, just 43 seconds behind.

We'd lost the lead just 10 minutes from the end of the race after having led for nearly four hours straight. It was anti-climactic, but we had to acknowledge both the brilliant driving and fantastic fuel strategy of the Benz team in producing their victory. And in the end, we walked away with a trophy, a decent check, four bottles of wine, and an incredible day of racing.

What you may have noticed by now is that despite Chumpcar's $500 "crapcan" racing premise, it's not the track-apalooza fiasco that is the 24 Hours of LeMons. The partying, car themes, and antics of the judges don't take center stage, with the racing relegated to a pastime between episodes of the "real" show. We love LeMons, too, but Chumpcar fills a hole in the current landscape of budget endurance road racing that those of us that love competition as much as we love a cold beer or a good laugh deeply appreciate. It's real racing, and it's real fun.

Rain Or Shine, The Race Is On
Rain, rain, go away! After the deluge that cut short the first running of the 2010 Nashville 9--a truly surreal storm that saw some counties reach 300-year flood marks, caused 29 deaths, and dumped over 13 inches of rain in two days over most of middle Tennessee--we were hoping for dry weather for the second running of the 2010 Chumpcar Nashville 9. Unfortunately, it wasn't meant to be, though the rain that did come was of the conventional sort, for the most part.

The race started under darkened skies and a constant heavy drizzle. After an hour or so, a dry line began to form, and eventually the rain paused long enough for the track to dry out completely, kicking off the start of the fast laps. Several cars lapped the 9-turn circuit in less than 1 minute, 20 seconds--times similar to those turned by fully-prepped NASA and SCCA race cars, despite the roughed-up and recycled heritage of the Chumpcar field. The Blitzen Benz even got into the 1:16.x range by the end of the day, and consistently ran 1:17s. That's blisteringly quick no matter the series. The rain came and went over the remainder of the race, with perhaps a bit more dry than wet in the end.

Our little 90-horsepower Honda handled impressively, making up time in the twisty sections no matter the conditions, then losing ground on the straights to yield consistent 1:21-1:25 lap times. But as with any form of endurance racing, it's not all about raw speed on the track--you have to stay out of the pits, run long stints, and not break anything to make it through to the end at the front of the pack.

Attrition, Strategy, And Luck
Running any car hard on the race track for nine hours straight with only a handful five-minute intervals for fuel and driver changes is a trial for the engine, suspension, tires and drivers. It's also a test of strategy, planning and pit crew execution. As Chumpcar is a budget series run by amateurs, the crew is typically also the driver lineup, making things doubly difficult--but also doubly rewarding.

The importance of strategy, reliability, and proper execution of the plan can't be understated--several cars that would otherwise have been in contention for the win either fell back in the pack or retired from the race due to unscheduled stops and equipment failures including Team Top Gear (multiple front wheel/axle issues), Team Skid Mark (overheating and eventually a blown head gasket), Kentucky Spirits (mechanically fine and very quick, but frequent pit stops) and Team Non Sequitur (a hard crash into the wall ended their day).

So what was the difference between first and second place? Besides the incredibly narrow 43-second gap over 9 hours and 518.91 miles of racing, it came down to fuel. Our White Lightning 89 Honda Civic sedan, while quite efficient for a race car, only holds 10 gallons of fuel--enough for the rules-limited two hour driving stint, but not enough for a double stint. The Blitzen Benz, on the other hand, while burning more fuel per lap with its six-cylinder powerplant, holds a 30-gallon cell, meaning it can run two consecutive two-hour stints before it needs fuel again.

Due to the safety rules of the series, any time fuel is added, the car must stay in the pits for a minimum of five minutes. Being able to change drivers without adding fuel can cut that time down to as little as two minutes--saving two or more full laps on course. Multiplied over the mandatory four-stop minimum in a 9-hour race, that saved the Benz team at least four laps against our Honda.

On the other side of the equation, due to the weight, rear-drive configuration and power of the Blitzen Benz, its pace in the wet was considerably off its dry pace--often by 15 seconds per lap or more. Our front-drive Honda held its ground in the wet, slowing only 5-7 seconds thanks to low weight, front-wheel drive and low enough power that it takes a truly ham-fisted driver to get it seriously out of shape under acceleration. If the rain had held out for another 15 minutes at any point in the race, the result would have seen us take the victory--luck plays a role as well.

And that's the real beauty of Chumpcar. You might not have $50,000-$500,000 to spend to compete in a more high-profile racing series, but with some grit, know-how, and a true love of wheel-to-wheel racing, you can experience the same thing at a fraction of the price. From hot laps to pit work to wrenching and strategy, the entire spectrum of the racing world is contained within this incredible $500 bubble.

Real Rules Make For Real Racing
Despite the treacherous wet-dry-wet-dry conditions, only 11 spinouts--none with car-to-car contact--occurred over the entire day, a few cars rubbed but never wrecked each other, and no black flags were flown. This would be unheard of in LeMons racing, where the slightest "infraction" puts you in the penalty box for up to an hour, killing all hopes of a good finish--not that it's really about the racing there, anyway.

That's not to say that Chumpcar lets you get away with anything on the track, but that it follows more closely to the rules and attitudes of the more expensive series: incidental contact, going off-track in a controlled manner to avoid an accident, dropping a wheel, or a solo spinout aren't going to do anything but slow you down. This makes for more fun on course, as you can really race your competitors without fear of angering the penatly gods.

And there's plenty of great racing to be had. The organizers work incredibly hard to make sure every event is a high-quality endurance experience, and the tracks the series runs are some of the best in the country. Every car on course during the Nashville 9 was part of a multi-lap battle at some point, with some cars trading places and racing for position over 40 laps or more continuously. Even if you do get a good battle in a Spec Miata or Spec E30 race--and it is likely you will--the checkered flag will fly and the weekend will be over in the length of an individual Chumpcar driver's stint, or often even less, outside of a few one-off endurance events each year. Chumpcar gives 4-6 drivers the opportunity to spend up to six hours each behind the wheel, and fender-to-fender, on a 24-hour race weekend.

You Can Do It Too
We love luxury and performance cars for the same reasons you do: we love racing, we love to go fast, and we love to ride in style. Despite its humble roots, budget endurance racing like Chumpcar satisfies that craving for speed, the thrill of the pass, and the puzzle of the strategy--all in a car that you can build yourself, on a real-world budget, and with whatever style and make you please.

If you've ever had the itch to test your skill and nerve in the purest of motorsports settings, you know exactly what we're talking about. And if you haven't you probably aren't reading this.

For more on Chumpcar and the Nashville 9 Part Deux--including how you can enter your own team--check out the official site and forums.