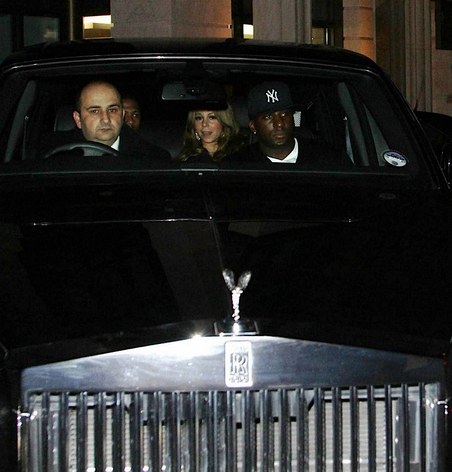 Mariah Carey and her Rolls-Royce crew

Diva to millions, inspiration to an army of curvy Latinas everywhere, but mostly on Long Island, just past the last stop on the LIRR--Mariah Carey, now you're truly a performance artiste.

Nevermind that you're riding a huge hit record (Download? Digital file? What exactly do we call them, now?), Memoirs of an Imperfect Angel. Ignore the Oscar hype for your star turn in Precious. Forget that at nearly 40, you've culled a 29-year-husband from the herd, and he's a cute one.

For a moment, dial down that uncanny Cherry-Coke pop sensibility and savor the many layers of irony you've assembled in this image that skewers those stupid "compare" photos at the back of Entertainment Weekly, which we think is a magazine for people suffering from brain-stem loss, while it neatly inverts the last photo of Princess Diana.

We'll go from right to left:

1) In the place of bodyguard Trevor Rees-Jones is a handsome dude in a Yankees hat. We think he's your bodyguard? For starters, no British man would ever have the sack needed to endorse a baseball team as controversial as the Yankees. Next, as far as we can recall, Rees-Jones is lily white, as if the hyphenated name wasn't a giveaway. The only thing these dudes have in common, in fact, is that they're both thinking of nailing the women they're supposed to protect. Because they're guys.

2) Here you are, looking all fine and way in control. You don't have that sort of clueless look that all celebrities have before their spectacular car crash / plane crash / final trip to Promises before everyone gives up. You are paying the bills, you can afford a big Rolls Phantom, and you have the keys to a huge Manhattan penthouse. You will not be shut up in someone else's castle...anymore.

3) Third from right, we see Nick Cannon. You can also afford him. Like Dodi Fayed, he seems to be a likable guy with an expensive clothes habit. He's also been pretty much been swallowed up by your ability to summon paparazzi at the wiggle of your nose, like Samantha on Bewitched. Slight difference here--Fayed was a gigolo living off his father's money. Nick's a player, but we're betting he's a player with a heart of gold. That'll mean something when you turn...um...50.

5) One final difference: you're from Long Island. Hence, we know you will totally cut a bitch.